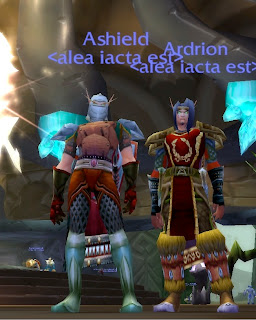 Welcome to Ctrl Alt WoW Episode 54 - Hard vs Easy. This episode was recorded on Sunday March 16th 2008. Just to recap for those who might not know, I am Aprillian and I play World of Warcraft, a lot, and I have lots of Alts. Ashayo is my cohost. We both go by the in game name of our main. Main being the character we play the most.

What we've Been doing

Went into Hellfire Citadel with Auntrilia (Level 63 Hunter) and Rilfire (Level 60 Hunter) with Ashoyo's Hilde and Jekle
Hard for me to do the organized shooting thing. Setting up stuff, I kind of like to just fight. Ashayo knows the best ways. I felt a lot of pressure.

Went to Zul Farak with Aprillian (Level 43 Warlock), Treshel (Level 53 Hunter) and Auntrillia. I was doing pretty fine, of course Auntrillia is overpowered. I take my time make sure my 3 are in position

I mentioned in gchat that I was doing this and someone offered to join me. They needed some of the quests finished.


Practicing ignoring people in Trade - Cuts down for a small time. A couple of times I hit invite instead of ignore and people accepted

Ashayo says he mostly sends it from higher to lower alts.

I noticed you guys were talking about dual boxing and I thought I'd
share something not many people know.

I play on a Macintosh. I am able to play two accounts simultaneously
on the one machine!

I have two monitors attached, an Apple 30" display and an Apple 24"
display.

On the Mac, you just have to create a copy of your WoW folder and
poof, you can launch two separate WoW processes. WoW is very self
contained, not spreading crap all over your hard disk, and we Mac
folks don't have to worry about antiquated constructs like registry
files.

I log into both accounts all the time using the one machine. My
performance is still great.

I've even done this on my Mac laptop. I open two instances of WoW on
the one screen in small windows, but it works. I wouldn't want to play
long that way though. It's much nicer on the large flat screen monitors.

The American Heritage Dictionary offers two distinct definitions of
animrod -- either a hunter, or a person regarded as silly or foolish.
The dictionary goes on to explain that the second meaning probably
originated with the cartoon character Bugs Bunny. The wily Bugs used
the term in its original sense to refer to dithering hunter Elmer
Fudd, whom he called a "poor little Nimrod." Over time, however, the
"hunter" meaning got dropped, and the "dithering" connotation stuck.

I just listened to my first episode of your podcast (#53) and wanted to let you know that I thought it was great. I've subscribed to it through iTunes and will definitely catch future episodes.

I met Ashayo last night for the first time. We ran Shattered Halls together and he mentioned the podcast. He was fun to group with and an excellent guest on your show.

Best of luck to you,
Molsan

Upcoming contest: Listen up for nice and very useful prize.
Posted by Aprillian at 7:53 PM