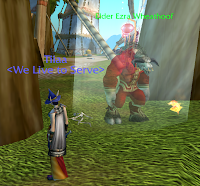 Aprillian, Glanthur and Ashayo discuss another week of playing World of Warcraft, Blizzard's great MMORPG. Ashayo is back and Glanthur joins us at the end. Good Times. Write us at ctrlaltwow@gmail.com
Contest Email/WoW Minis and Episode 100

Mithril spurs helps Auruk keep up with the DK's, had the twins and Auruk in Nagrand doing a lot of quests. They got some good upgrades and both dinged 66

The servers were down on Friday morning but came back up a little after one. I was doing a disk repair on an external drive on the iMac so I was only on one computer. I felt bad leaving Auruk out, but I took the twins to do [Wanted: Zorbo the Advisor]. Of course the XP is better without Auruk. Ending up sticking around the Warmaul area grinding for powder and beads. The level 65 and 66 mobs were easy. I was mostly took on one each. Also found several mining nodes including Khorium. Finally got the iMac back up and brought in Auruk and she kept getting Warmaul skulls.

I brought in Aprillian to do Tusker and when they were done, they got the achievement White Elek Nesingwary completion. Aprillian continued on to do Dailies, while the twins and Auruk rode down into Terrakor to quest down there.

Realized I need a high level DE, I have a Veyle, my level 40 Rogue who can DE up to 300, she can do Outland greens right now, so that's cool. But I have Primall who is level 55 but is only 107. Do I try to power level Veyle to

Then I realized Aprillian was at 400 Tailoring, only 10 away from, so I spent money Friday night buying Frostweave Cloth

Saturday I wanted to do the Lunar Festival but got hung up levelling Primall in enchanting. She had a bunch of BOE stuff that she had gotten from Instances but wasn't high enough to DE. But finally after getting Enchanting to 130, she and Veyle went to Valley of Wisdom and starting the Lunar Festival. While in Moonglade Veyle ran up to
Nighthaven to get the Runed Arcanite Rod recipe
Locksmith? when asking for directions to Tailor. Veyle is donating mageweave and silk cloth to up her xp.

Guy begging in TB. Wanted 5g, I said I would give it to him in exchange for some leather. Elder Ezra replaced Elder Proudhorn

Back in TB with Veyle and Primall. Hopping around getting coins and in between stopping to level enchanting, and LW on Primall, the LW to get greens to DE. Aprillian in Blade's Edge doing the Mana cell one and netherstorm doing the fury plans and Shutting Down Manaforge B'naar ended up teaming up with a Warlock 72 from Demise with Felhunter

Sunday morning I took Epril, JC and Miner Level 66 to train, she hit 350 making an Adamanite ring, and she was able to train 59 recipes plus Grand master JC, 100g!

Then she found the Lunar Festival Exclamation mark in Dalaran. I logged on Elyte and the two of them did the initial quest. Then I see people doing the [Frenzied Firecracker] and the [The Rocket's Red Glare] achievements hard to do in laggy areas

Then took Primall and Veyle to TB to start coin collecting out that way but stopped in for the Un goro soil quest because Primall had it and there was some soil in the bank. Primall dinged 56. Then they headed to Camp T

Decided to take Primall and Veyle to RFD, yes I have ADD. We got into the instance and a couple of greens dropped but decided to go back to do some more coins. Veyle ported to Dalaran and summoned Primall, she still had Scryer for hearth. Then went to the Lunar festival in Dalaran, but they no longer had scrolls in their inventory. They were able to get more from the Lunar chick

After doing some research, I realized Primall could

Chef Ashayo at last!
3.0.8 added more cooking recipes so that the 45 version of The Northrend Gourmet was achievable.
Either I miscounted, or they changed the total recipes available down from 46 because I was sure I could leave one out.
The Fish Feast required 450 cooking to use, so I left it out. But it turned out I needed it.
Which meant levelling cooking from 420 to 450, and since there wasn't any fish in the AH, I had to fish up about 50 of two kinds of fish and 50 rhino meat. I chose the Small Feast, since the fish it requires are both available in schools, so are easier to ensure you catch.
Finally got enough mats and cooked up to 450... only to find the Fish Feast recipe required 5 Dalaran Cooking awards instead of the normal 3, and I only had 3 left.
Waited for daily change-over, and it was the damn wine/cheese quest that only gives one cooking award.
So I had to wait another 24 hours.
In the meantime, made damn sure I had enough fish to actually make a Fish Feast once I learnt it.
I was out when the dailies reset, and so finally and 2am this morning, I completed the cooking quest and got the Chef title. Phew!

Worked on getting my enchanter up to 350 so he could DE level 78 gear. Wasn't too hard ; I'd stockpiled quite a few mats and the vellum's help alot.

2nd egg from Oracles hatched on my holidays - unfortunately both were aged yolk. Waiting for 3rd to hatch.

Tailor is making ebonweave and spellweave - nice that imbued frostweave requirements are down (glad I left that until after 3.0.8)

Nagrand with DK - soloing level 68 group quests at 66. Camp Forge Fear chain. Did Durn the Hungerer with 1 DK and a healer.

Started Lunar Festival - do for rep!
Ashayo got 25 coins of ancestry and
10 Exalted Reputations (Undercity) at same time
The ancestry coin for Gundrak is only available in Heroic mode. After I was in a group that completed it, summoned a bunch of other guildies to complete in easy mode.

Did a raid in Naxx (10-man) and got through a lot of the dailies in Icecrown. I also respeced Arlaerus from Holy back to Protection. I just really missed my shield spells. Though, I need to get new gear now for him. Epic flying for Arlaerus is now only 3K gold away. I'd like to thank the guild Lost Chapter on Wyrmrest Accord for being an outstanding guild! Thanks for all the fun times.

I just wanted to thank Aprillian for the advice on the Nagrand quest with the trampoline. I worked on that darn quest for over an hour - with your suggestion on how to make the jump it worked on my 2nd try. Another DK and I had to team up to kill the bird that worked well.
I really get alot out of your podcasts and even though you tend to be a bit Hordish I enjoy it anyway.
Have a great week - looking forward to the next podcast.
Thanks,
Tracey (Warhumpdy, Dkhumpdy) on Malygos
(Hey to Hand of Destiny guildies)
Email #2 from Patrick

Well I made another move from Garrosh to Wyrmrest Accord (now I am starting to sound like Aprillian). The reason why I moved again is my friend missed the free window from Earthen Ring to Garrosh and we really wanted to team up and level as a group.

The 2nd reason is the same as what Glanthur had stated about RP servers. Like him, I just wanted to be on a RP server to watch role playing. I, like Glanthur, am not a role player but I found that many players on RP servers are friendlier and tend to help out more. Sure you always get the clowns, but in general, I find the attitude is far better.

That’s all for now.

Hello, it is Xandarr again. http://ctrlaltwow.podbean.com/2009/01/16/ctrl-alt-wow-episode-97-respec-just-a-little-bit (But now I have made two new toons on the Perenolde Server with the Epic Dolls Guild. You might know them as some of your fellow podcasters)
Anyway, I was shocked to hear you read my email on the air. I was so excited that when I got home that evening I let my wife listen to it. BOY DID SHE ROLL HER EYES AT ME. She said that not only was is more addicts trying to justiy my addiction with them, but that when she has our next baby in 8 months I have to give up the game entirely.
ACK!!! NO!!!
Anyway, such is life right? I am really not looking forwardto giving up WoW competely. She dosn't realize I FIND MY TIME TO PLAY and NEED that time... desperately. Even if it is an hour here or an hour there. I just gotta find better times to make time for WoW after I take care of the baby and stuff. I gotta find a way to make a deal with her. Any ideas?
I did write a review for you guys on I tunes under the name Jasper2112. Love your show, and I am glad it is on weekly.
FOR THE HORDE!
Chilie & Cornbread (Tauren Hunter and pet cat)
with
Portirhouse (Tauren Death Knight)
Dubbed "He-who-loves-food" by guildmates
Common Dolls with the Epic Dolls guild on Perenolde Server
Email #4 from Eranth

I thought I’d drop you a line for the next show and just make a few comments about the recent patch with the “Hunter Nerf” from the casual hunter’s perspective.

There had been a good deal of concern that this patch would really hose down the DPS of the Hunter. While I believe that the result that Blizzard has come up with does tone down the DPS of the Beastmaster and likely the Marksman some, we may see the Survival Hunter tuned up to be more viable. What I’ve noticed with my more casual play of my Beastmaster Hunter is that where my pets were pretty tough before, able to aggro, hold and grind down 4 or 5 mid-70’s to upper-70’s mobs, I’m having to throw down more Pet Mends to keep him up and going. While I feel like my DPS has come down some, it’s not nearly as drastic as I was imagining it would be.

While I haven’t crunched any numbers, my evidence is simply based on trying to pay attention to how encounters have gone, compared to how they felt they’d gone in the past. I’ve done a fair amount of grinding out leather in Scholazar Basin, trying to pull in 3 or 4 mobs at a time, multi-shot and AOE them down, then collect the skins. Again, the biggest difference I’ve noticed is having to throw down Mend Pet more often than before, because my pet isn’t as tough as he used to be.

I’d be interested to hear what others have experienced!

Keep up the good work with Control-Alt-WoW!

“Walk with the Earth Mother..”

Posted by Aprillian at 6:36 AM