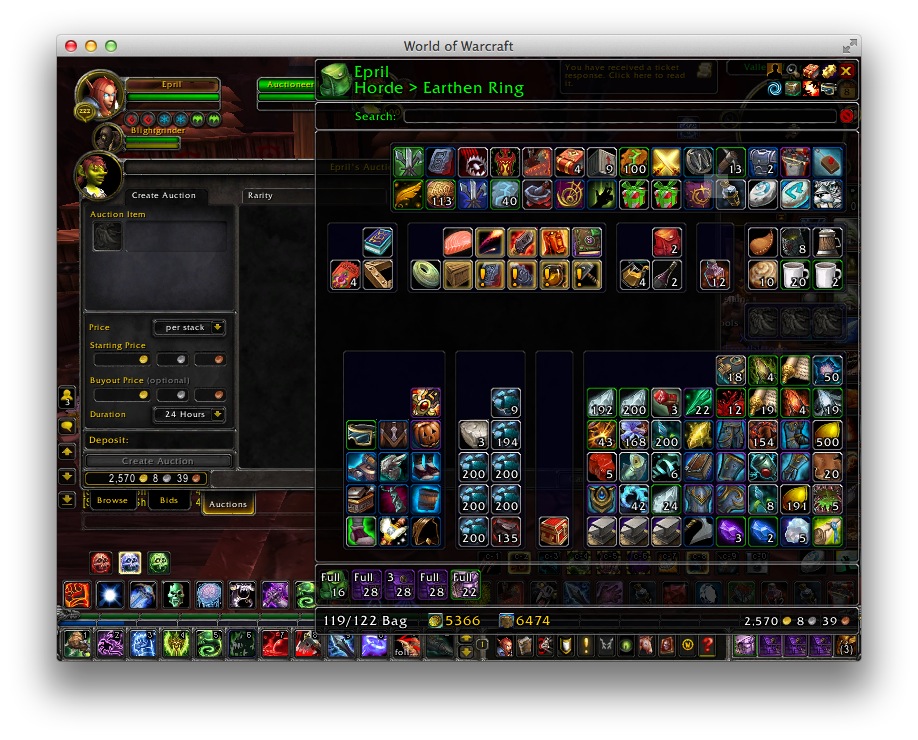 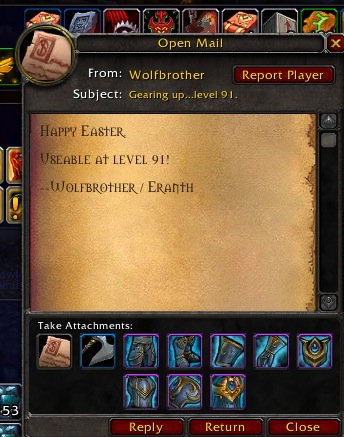 Not broadcasting from the Garrison today because it’s still infested with SPIDERS! hehe
Super excited to be on the show!!! Thank you for having me! =D
This week started out being all about the usual…garrison missions and raiding...still working on collecting all my Abrogator Stones (and Clusters) from Highmaul...almost there!  Should have been done ages ago. Love doing LFR again.
Then switched to Noblegarden! Daisy hadn’t done it last year & it was WAY easier/faster than I remember it being in the past - got 600 chocolates in 2 ½ hrs - got the Mystical Spring Bouquet, Swift Springstrider mount & the Black and the Pink Spring Circlets. No camping required. Somehow I have not completed the Shake Your Bunny-Maker achieve… O.o 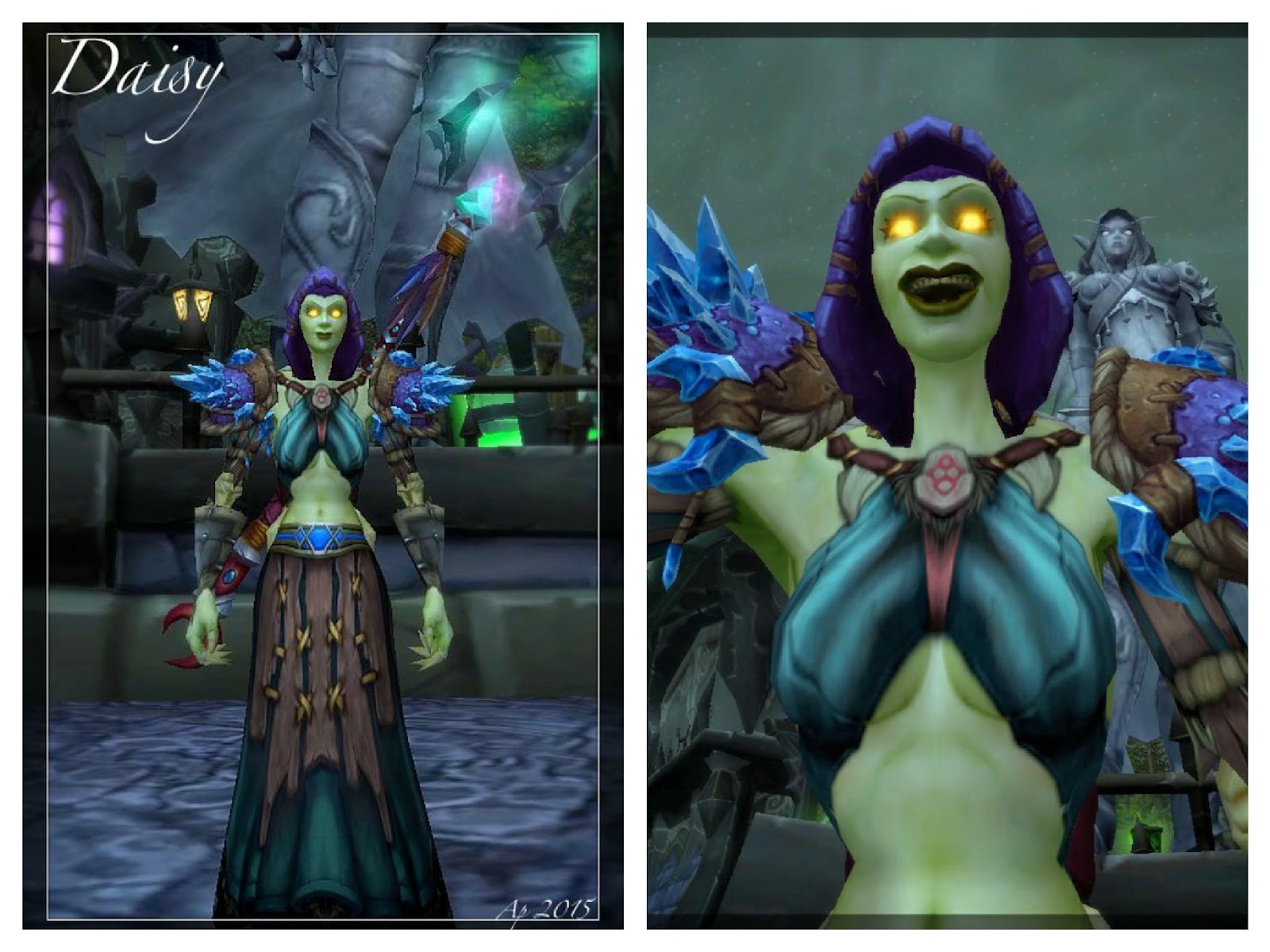 Had fun with the S.E.L.F.I.E. Camera! The above picture is before Noblegarden and below is after! 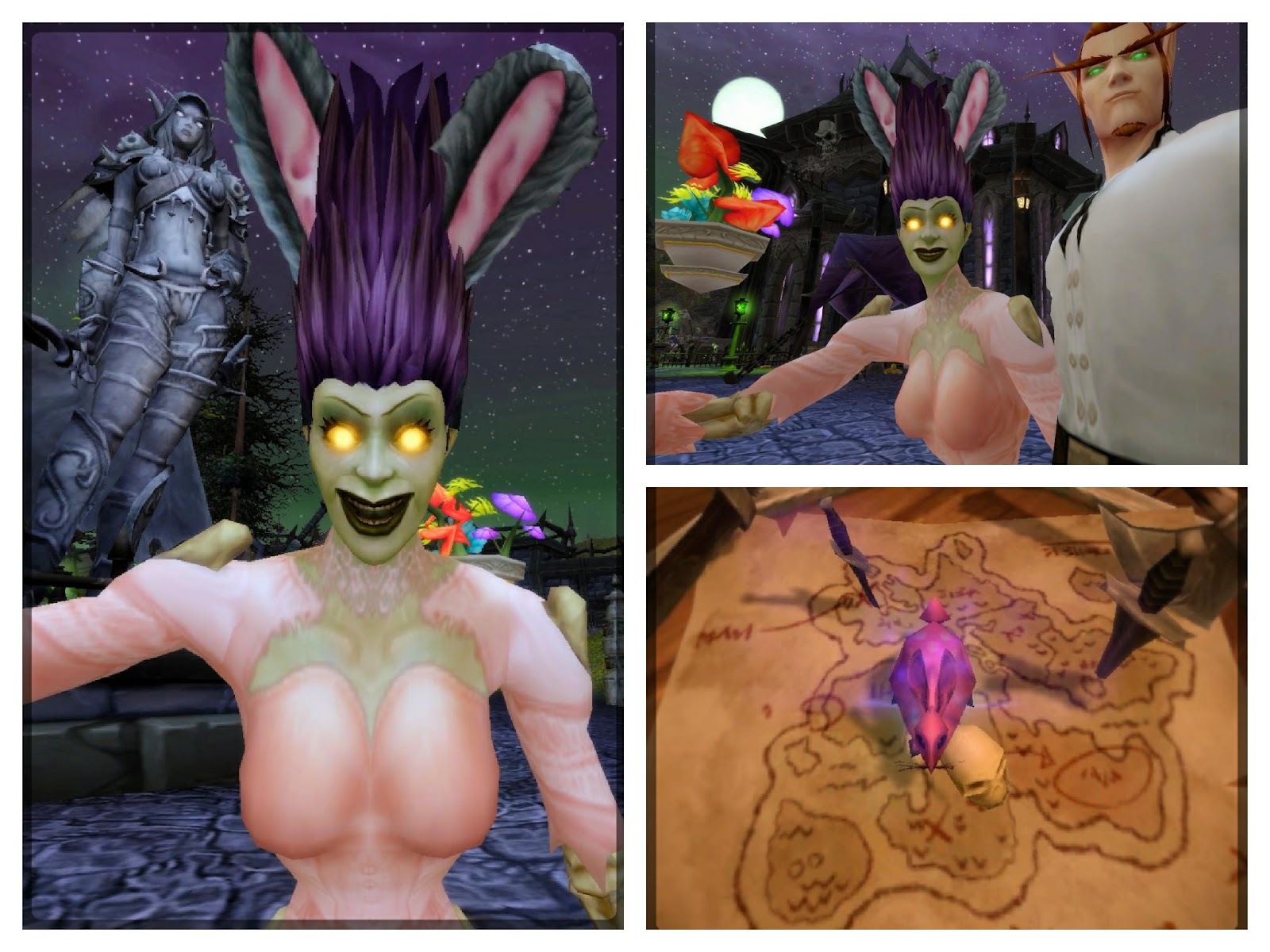 (Sorry! I don’t know how to insert these pics right… ack! Sorry!) 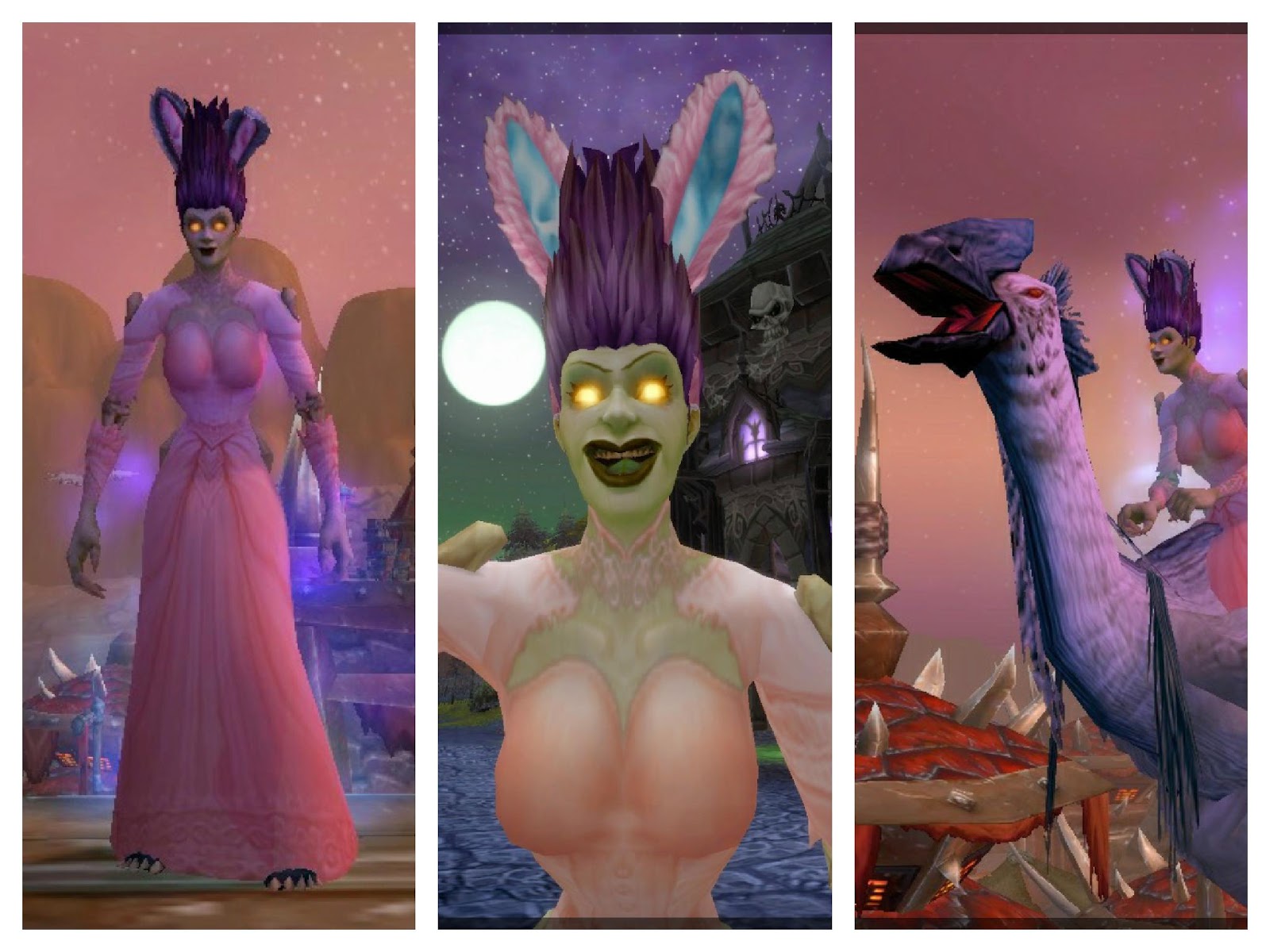 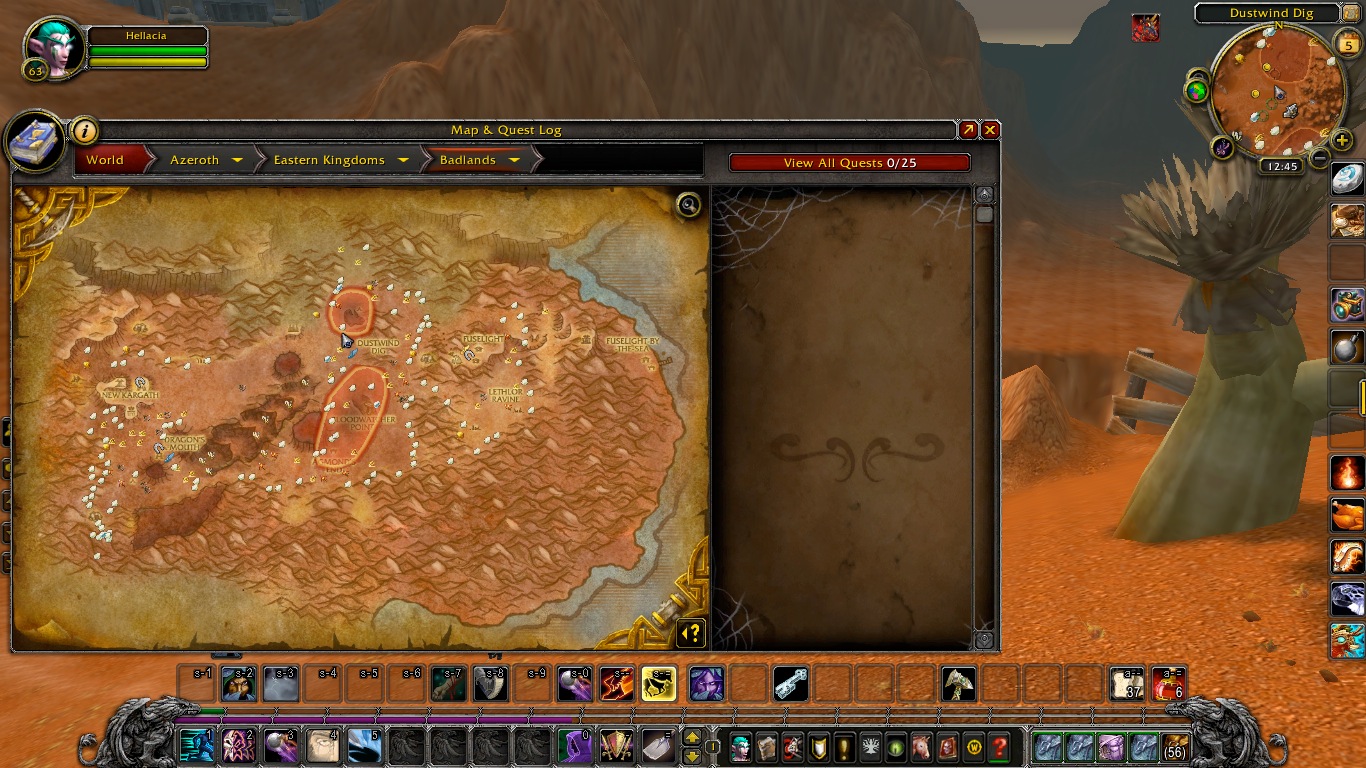 Grellic here :)I hope you are all doing well, first of all I would like to say my 1st live stream experience was really fun, the chat room were brilliant along with all our wonderful hosts. technical issues aside and adverts interrupting I really enjoyed the experience. Although it was rather strange to not hear the intros and all the bumpers for the different sections. I also felt I knew most people in the chat room from all the stories over the many episodes and all of you was very welcoming :D

Been listening to the show since I heard that very wicked laugh of Aprillian's on Inside Azeroth with Steve and David, they were my first foray into to wow podcasts as only started playing about 6/7 months into BC, and thanks to them I discovered CAW and also BoE as you all had been guests on there shows very early on in their run. Over the 7/8 yrs I have been playing I have taken breaks from the game now and then for one reason or another (mainly real life stuff or lack of job) however during these periods of time I have always continued to listen to my regular dose of CAW and BoE that has kept me up to date with what is going on and also sharing your journeys through the game. Which has often made me wish I was back in game as you all sound like your having soooo much fun. Over the years I have made a number of friends who have either stuck at the game or stopped playing. My sister is also a long time player of the game and we use it to chat on a regular basis via battle net which is great and have found the our shared interest in the game has brought us closer over the years

Up until now I've mainly played on the EU servers being based in the uk but after chatting with Fallen Angelz in the chat room decided to check out the us servers using a starter addition on my account. I've rolled a Tauren Druid by the name Grellic to see how it fares and I have been very impressed the results far surpassed EU servers, little to no lag also my average frames per second on an EU server is about 35fps, on Earthen Ring I'm getting a minimum of 55fps with a max I've seen of 92fps :) So after concluding my research I've decided to make Earthen Ring my home and hopefully Clan of Darkness at Fallens recommendation as I'm in the process of upgrading my account as I'm typing this e-mail, CoD sounds like its a very fun and welcoming guild very social :). One of my long time WoW friends might also be switching over to the US servers as she is relishing the challenge of a fresh/clean slate start with WoW so no achievements linked to an account until earned again.

I think I've rambled on long enough and hope to see you all in game soon and look forward to joining you all for many more live streams.

As they say in Wales Da Bo Chi ( see you later, rough translation)


Email from Setnuh
Hi everyone I hope you are all doing well. I thought that I would answer the challenge put forth by Wingy. I have been spending  a lot of time pet battling and collecting. I realized that I was pretty close to getting most of the Safari achievements so I thought I would do those but that has not gone so well. Most of the ones I need are weather or season dependent unfortunately. I managed to get my level 3 menagerie and have been enjoying that. The daily quests are very rewarding indeed.

My main character is an alliance shaman on another server that I wish I could play in CoD. Since I don't want to pay for a faction/server change I did the next best thing and made a Tauren Shaman on Earthen Ring. He is level 20 at the moment but probably much higher by time this is read. Other then that I have done a few pet runs with nothing to show for it and kept up with my garrisons.

I have recently discovered how much gold can be made through follower missions by having multiple followers with the treasure hunter trait. Sometimes bringing back as much as 900gold for a single mission.

Well thats about it so thanks for the great podcast and keep up the amazing work. Until next time this is Setnuh for the pets, and for the shamans

I'm reaching out with the hope I can solicit some help from the WoW podcast community about the status of the WoW Iron Man Challenge website.

Basically the site died, I bought it the domain, restored the code, rebranded it as WoW Challenges and am trying to resurrect the community.  There are a handful of us still around from when the Iron Man challenge was "big" although I am a relative newcomer compared to some of our veterans.

The new WoWChallenges.com site features the Iron Man challenge as well as two new challenges: The Pacifist and The Grinder (not to be confused with Grindr lol).

I've personally dropped a buttload of money on buying the wowironman.com website so that it didn't sit there getting squatted on so advertising is a little dicey for me at present, however, I am willing to talk about buying ads if you have an ad spec sheet for me to see.

I'm really hoping you can help me out more by word of mouth. Your voice reaches a LOT of people. Even a simple mention that the Iron Man challenge lives on at wowchallenges.com(or even wowironman.com since that will direct to the new site) would be a tremendous boost for our community.

I am available most of the time if you'd like to talk more, although I have two children and a wife to manage as well (heh).

Thank you in advance for any help or support you can give.

My name is Tyfani and I've never written in before but I've been listening for the past year.  I love that you ladies do so much in the World of Warcraft and have so much fun.  I have only been playing the game for about a year and a half and I do not play a bunch of different characters like you do, and I have only played on the Alliance side.  I just made a little Horde character on Earthen Ring server and am hoping to join the Clan of Darkness!  She is a Forsaken hunter and I named her Tynkr.  I promise she is nice.  My Alliance character is a human warlock and I have a lot of fun playing with her, though I have never had the nerve to do any PVP or raiding yet.  She isn't even in a guild.  But I want to try the Horde side and thought it would be fun to play with COD.  I hope you have a really good show today!

with Grand Nagus
No segment this week :-(