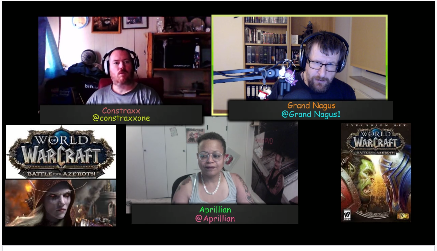 Upgraded to Level 2 Garrison on Daprishnah

Legionfall Chest gave me the Orphaned Felbat
Honor Level 35!
Allasomorph got from Level 30 to 35
Grand Nagus reached
Exalted rep with Golden Lotus and The August Celestials
And Revered rep with Shado-Pan and The Klaxxi
From gathered rep tokens from killing Zandalari Scouts and Warbringers.


Trelane’s progress:
Four Square Hold all four Orbs of Power at least once in a single Temple of Kotmogu battle.
Temple of Kotmogu All-Star Hold four Orbs of Power and kill four enemies who are holding an Orb of Power in a single Temple of Kotmogu match.
Blackout Kill 100 enemies that are holding an Orb of Power. Count: 56/100
Shadow of the Betrayer Complete the Shadowmoon Valley storylines.
Loremaster of Outland Complete all Outland zones storylines.
The Loremaster Complete all zone / continental storylines including Legion.
Skyshattered Defeat all 6 riders in the Dragonmaw races on Netherwing Ledge. 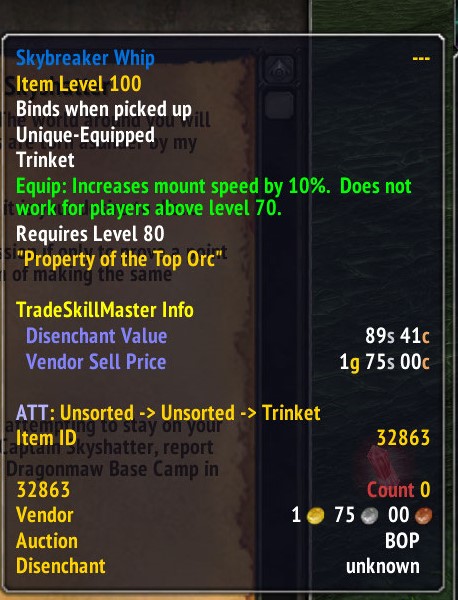 
It's almost time to start the new expansion pack.  I can't wait to see how the story unfolds. I only wish there were another month of summer - school starts in a few weeks and like my students I am not ready yet.  I wonder how I can turn playing WoW into a science lesson...


This week's Blast from the Past is again from episode 346.  Enjoy!


PSA: If you are running the LookingForGroup (LFG) addon I‘d advise to delete it ASAP. The guy made some alarming comments, I wouldn’t recommend running code from someone with such temper on your machine. Next thing you know, you’re /yelling threats in SW.


Addon(s) of the week: SilverDragon
SilverDragon tracks rares. It will try everything possible to notice them and tell you about them.

How does it search?

Some rares are part of an achievement. When you mouse over a rare mob, SilverDragon will add to the tooltip whether you've already killed it, so you know whether you need to rush for it.

SilverDragon includes a Broker plugin. It'll attach itself to your minimap, or a Broker container you have installed, and show you a list of the mobs it knows about in the current zone.

In SilverDragon's options you'll find a "Mobs" section. In the "Always" section, you can add any mob you want to be scanned for. All you need to know is the mob id.

So, let's say you wanted to keep an eye out for Lil Timmy in Stormwind, to buy the kitten he sells. You would...

Yes, this example dates me.

Those little skull icons you see on the minimap. If one of them is a rare SilverDragon knows about, it'll yell at you.

If you mouse over or target a rare mob, SilverDragon will notice it.

If you have enemy nameplates turned on, SilverDragon will keep an eye on them to look for the names of known rares.

SilverDragon can also create a macro to target any rares that are known in the current zone. You can stick this on your actionbars as a button to spam while chasing after a rare, or bind it to a key. This is sort of a last resort.

How will I know when a rare is seen?

When a rare appears, SilverDragon will pop up a frame that you can click on to target it.
Warning: If you're in combat, secure action restrictions mean that it won't show up until combat finishes.