Ctrl Alt WoW Episode 625 - Carousel Nose Bleed !
Aprillian, Constraxx, Vrishna, Grand Nagus and guest hosts discuss another week of playing World of Warcraft, Blizzard's greatest MMORPG. The show features audio segments and email submissions from our lovely listeners. Guild Round up from Constraxx.
If you want to join the conversations on the show, we have a live chatroom with in-game giveaways moderated by chatroom-guru Constraxx. We record Live on our Twitch.tv page twitch.tv/ctrlaltwowpodcast
We also have an ongoing contest. Send an email to ctrlaltwow@gmail.com telling us how you play WoW, either as an altoholic or dealing with it in your family life to being placed in a drawing for a WoW Pet or an Authenticator.


This month in WoW:


The Eternal Palace LfR Wing 3 opens on the 13, 14 or 15, depending on where you are in the world.
Battleground Bonus Event starts next week.
Free T-Shirt Day is on aug. 16th. (Vendors have been spotted in several locations throughout Azeroth selling t-shirts for.. FREE!!! There are even rumors of entertainers launching free secondhand shirts in capital cities ).
Battle For Atzeroth Dungeon Event and PvP Brawl: Arathi Blizzard both start
on the 20th.
Pet Battle Bonus Event starts on the 27th
Trial of Style starts on the 31st and ends on Sep. 4th.

Character reservation on WoW Classic servers:
Character name reservation for WoW Classic opens next week on Monday, August 12 at 3:00 p.m. PDT. Players with an active subscription or game time on their World of Warcraft account will be able to create up to three characters per WoW account and have the name(s) reserved before WoW Classic releases worldwide on Monday, August 26 at 3:00 p.m. PDT.
We will release details regarding realm names and realm types later this week so you can coordinate with your friends on where to begin your adventure. If there are high numbers of players congregating on individual realms during the name reservation/character creation process, we will post warnings about the potential for long queues on those realms, giving you time to choose alternate realms. Also please note: Character creation will be limited to only one faction per realm on PvP realms.
After release, the number of WoW Classic character that can be created per WoW game account will change to the following limits:
There is no overlap regarding character limits with World of Warcraft, so if you have 50 characters in Battle for Azeroth you can create 50 more characters in WoW Classic.
WoW Classic’s worldwide release is almost here so it’s time to get started organizing and planning your path to level 60!


Pre-launch test for WoW Classic:
Our global pre-launch test of WoW Classic will begin on Thursday, August 8 at 11:00 a.m. PDT and is scheduled to end on Friday, August 9. This test will be available to all World of Warcraft players with a current subscription or active game time in all regions. The maximum character level will be 15.


In our hardware testing, we found that we were able to successfully run WoW Classic on systems manufactured and released in the 2007-2009 timeframe, and thanks to improvements in how we build and distribute game data, the hard drive space requirements are actually smaller than they were in version 1.12 of original WoW. 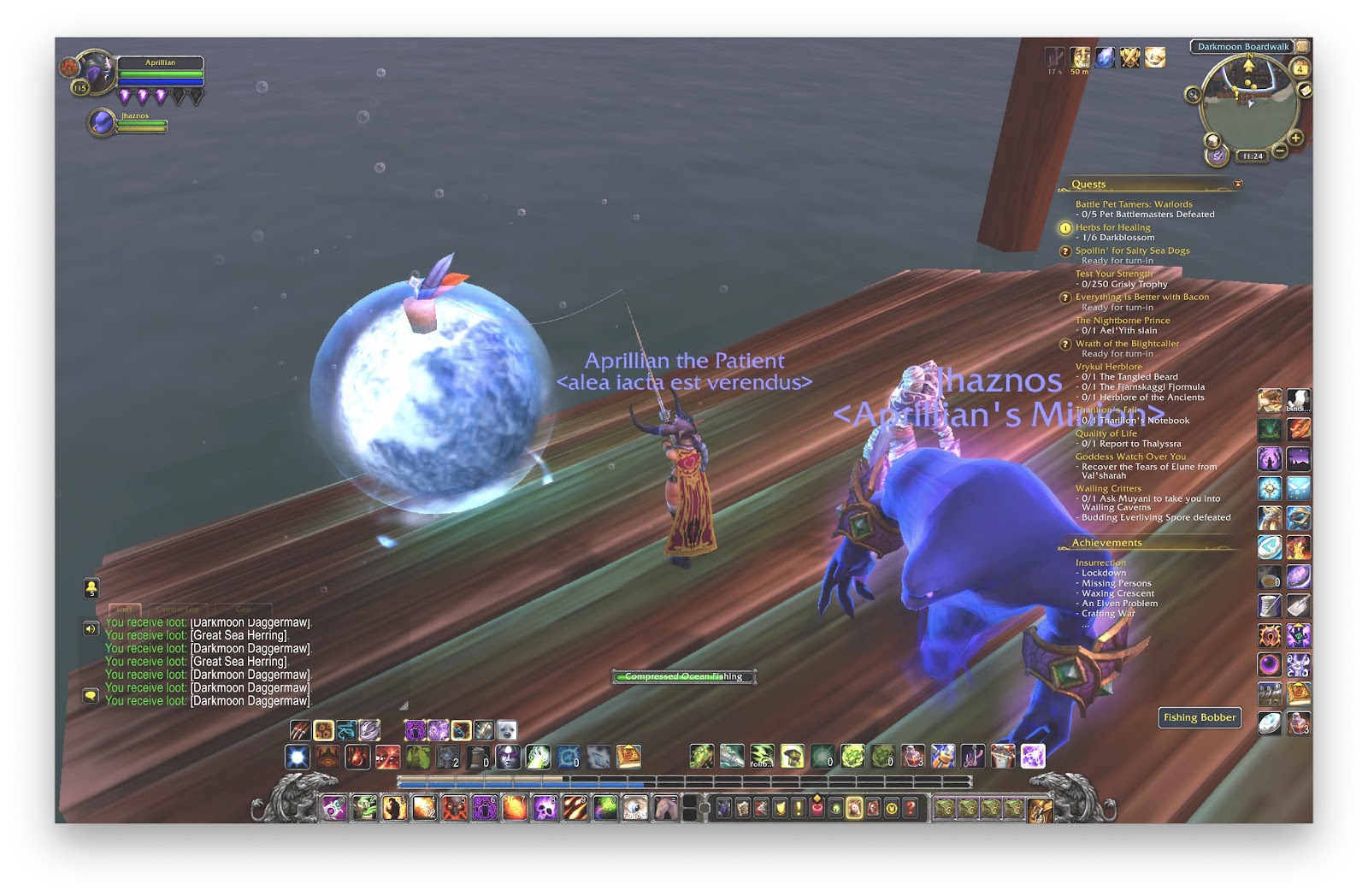 
Round and round the Carousel!


Burning hard on the Rep trail with the 20 world quests on all my max levels. 20 resource x 50 missions = 1000 War resources. That’s a lot of champion Exp.


Positioning level 31 rogue near FP while rested and Buffed with Whee!!! I did the Archeology enough to get all the way to the startup quest : Fun for the little ones! Archeology at darkmoon, also, completed the Grisly trophy quest on several characters, bugged on the Goblin mage, not sure why, dropped quest and picked it up again.


No time for dungeons this week, too many world quests to spread on too many characters + trying to line up 7 characters (in pairs) to do incursions.  This many levels of leveling + Garrison Follower (looking for a paladin) led up to a big living room fight about playing the game and managing my time.


2 CAT 6 cables burned out, no internet for me for 3 days, New Headset, Man’owar Overwatch Razer Collector’s edition : $143 after tax CDN (on sale 28$) Amazon to the rescue.  Had to borrow some money from the spouse to be able to pay my bills.


Killing a lot of trash in multi-party on crossrealm, Rares seem to scale all the way up to 120 even in leveling zones in classic WoW when partied to a level 33.


Woes with the Battle for Azeroth Companion on iPhone 6s, probably a glitch in older phones, takes 2 to 3 attempts to connect and send your champions on missions, and you can easily switch to your other accounts.


Moving Goods on AH thanks to TSM4, post about 300 auctions in roughly 15 minutes if you set it up to follow your automated listings. 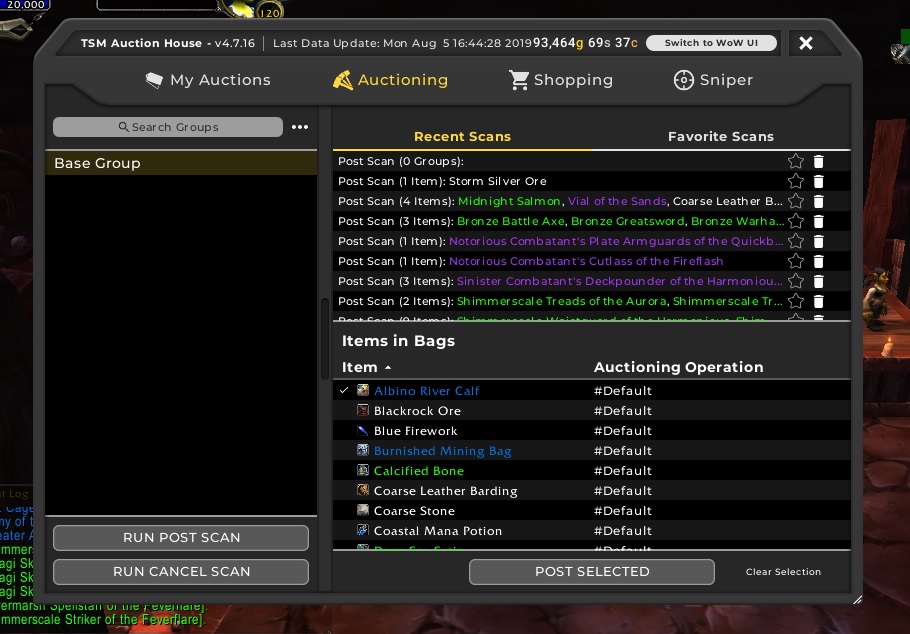 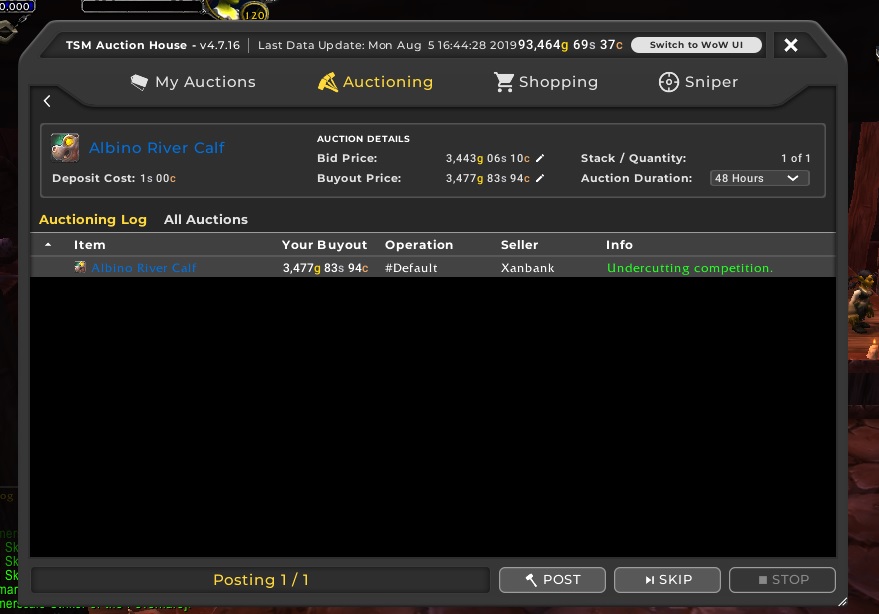 Results in a few minutes : 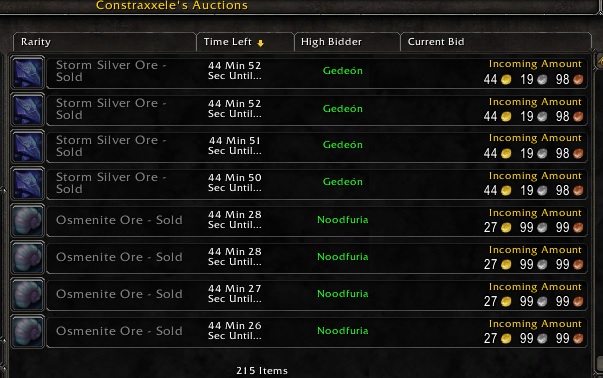 First time doing Hellfire Citadel (Draenor version) solo.
Got 5 pieces of transmog, 2 Rogue, 2 Monk and one Druid piece
Got several achievements in HFC, 5 on this run, that leaves me with 4 more to go to get the Meta achievement Glory of the Hellfire Raider that rewards the Infernal Direwolf.
Going to work on those over the next weeks, progress report coming.


Balance of Power progress:
Need to do the final Raid runs now, Nighthold with 3 quests, 2 are one off run, kill and loot, the last one requires me to collect 20 shards, so i need to do multiple runs after all.
Can’t do more then 5 bosses solo, since mechanics are too hard to deal with.


No deaths this week!!


I created a Geosynchronous World Spinner


This week has can be summed up by the phrase "a little bit of this and a little bit of that."  I have been doing Mechagon dailies and rares to hopefully get the loot I need to finish a quest for the mechaspider mount.  I have also been leveling up my hunter on Earthen Ring and am now in Pandaria with her. Finally I have been doing occasional world quests and such on my alliance toon to raise 7th legion rep in order to finish off the war campaign for my achievement and mount.


Hope you all have had a great week and continue to be awesome in this next week.  This week's Blast from the Past is from episode 381. Enjoy!