Leveling Epril doing Archeology! Dropping a banner made a difference of 1,300 xp. Also, I forgot to wear my heirloom chest. 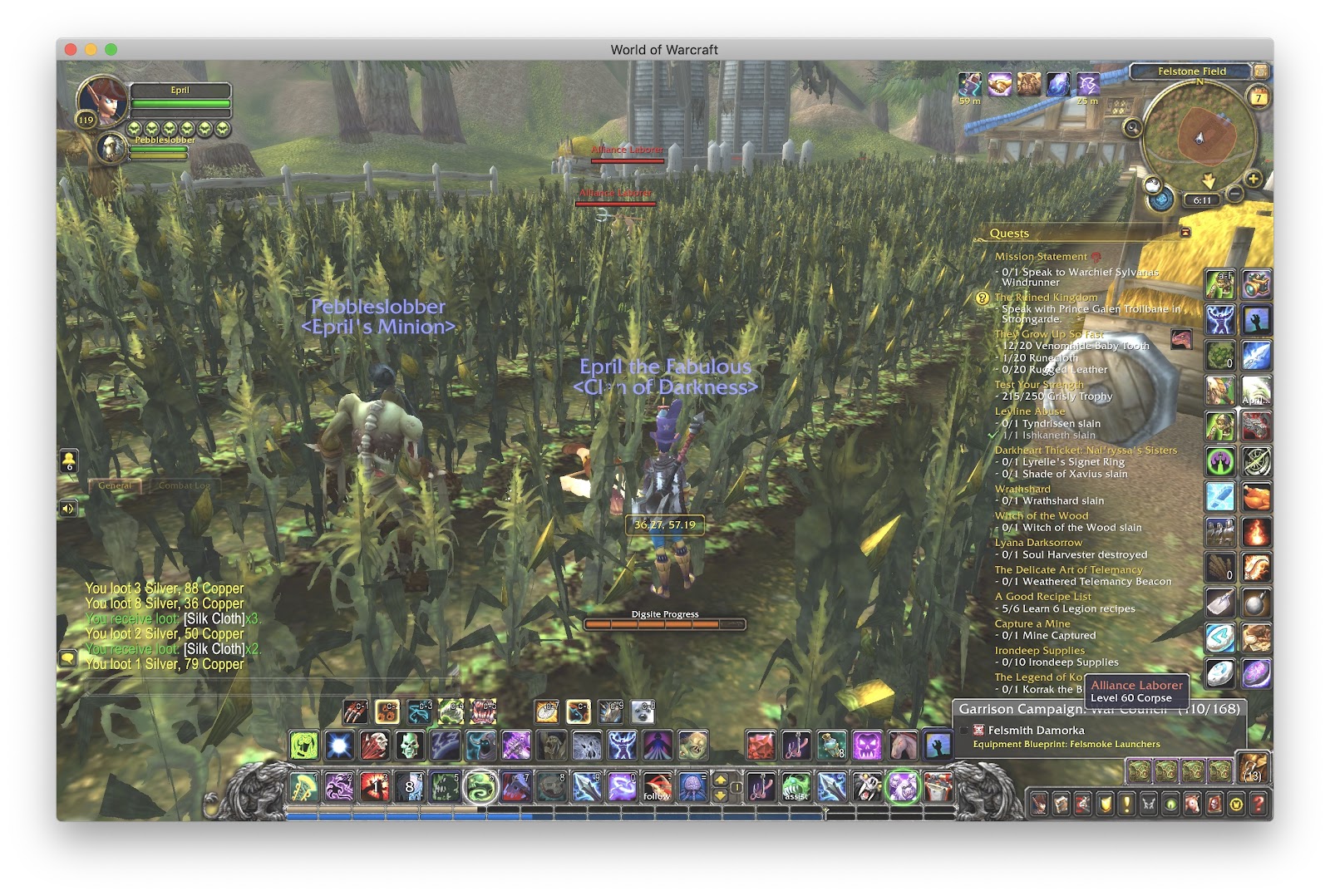 Do you know how hard it is to do archeology in a cornfield? 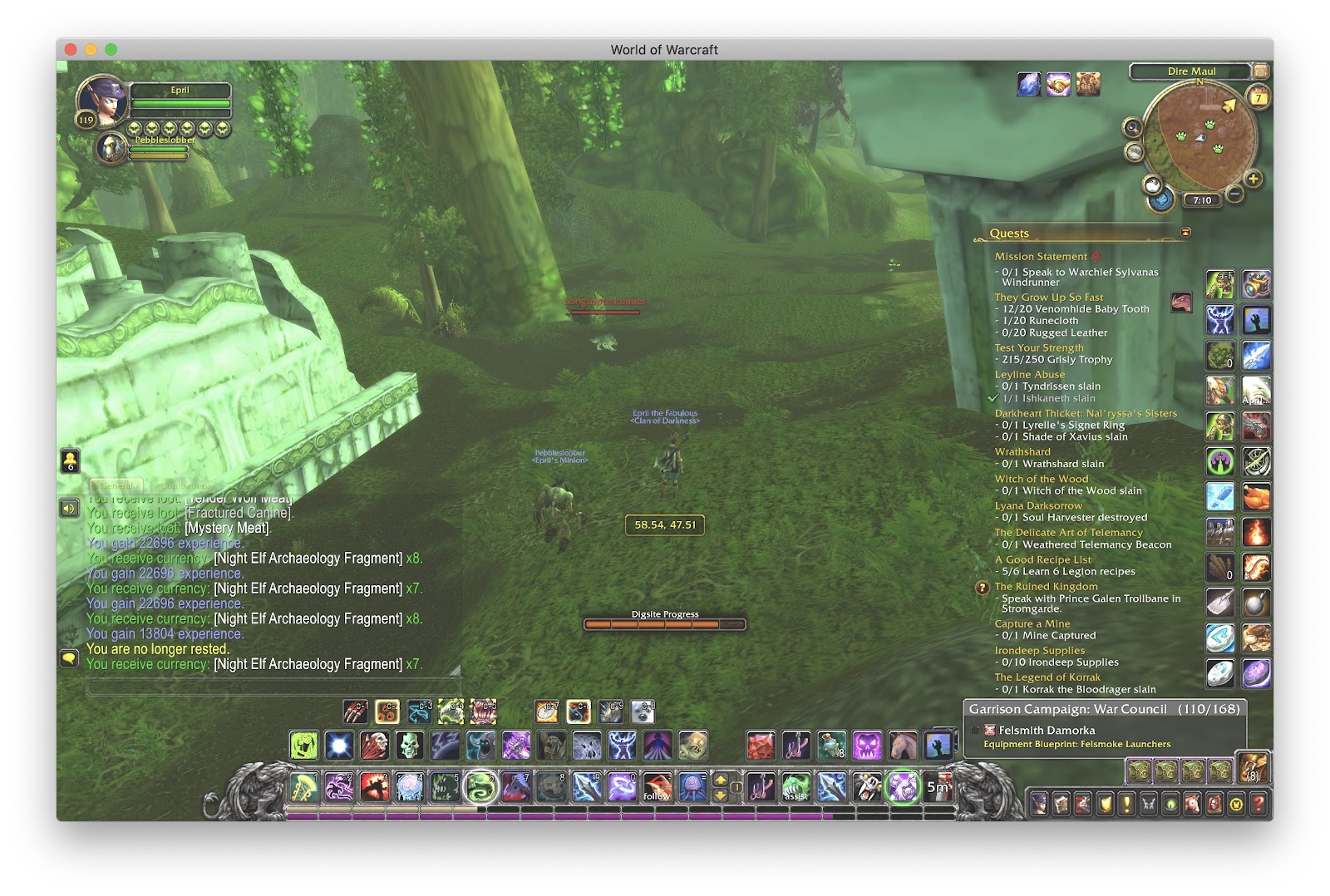 Mag’har Orc Warrior reached 110 and got his 3 sets of Heritage Armor, one for each Clan, Warsong, Blackrock and Frostwolf. I didn’t know that there are Clan specific Heritage Armor Sets for the Mag’har Orcs.
Highmountain Tauren Druid reached 97 playing Frostfire Ridge storyline,
Talked to Raz, he did so too finished it and i thought i might do so too, even though
It’s one of the sadest final


Nothing too interesting on my end, just a little leveling here and there.  Today's Blast from the Past is brought to you by episode 409.  Enjoy!

Greetings to the esteemed Captain and crew of the CAW


The time since last I wrote has been busy, and filled with friends old
and new.  I must offer my most sincere gratitude to the lovely
Rougeslayer, who graciously gave her time to welcome not two or three,
but five new members to the crew of the CAW while it was docked in
Winterhoof.


Many friends and correspondents are still diligently laboring on the
task of completing their armor sets, growing in skill and ferocity along
the way.


Aqira, a Maghar Orc of my acquaintance has completed her quest, and is
preparing to investigate the unrest in Zandalar.  She hopes to soon join
the Clan of Darkness where I reside, so I look forward to a closer
friendship.


Peoni, a correspondent that I made when we first made contact with the
lost lands of Pandaria, has also recently completed her adventures in
Zandalar, and has gratefully retired to her peaceful garrison in
Shadowmoon Valley. She plans to spend some time working on her weaving,
and creating garments and bags for other adventurers.


Several other dear friends have grown into great warriors for the Horde,
and are practicing their various arts to increase their mastery of their
professional skills.


I myself have been busily hunting for more little pets. This hunt
recently led me to an amusing adventure in the lands of King Mechagon.
In attempt to find the fabled city of Mechagon, I teamed up first with
the Gnomes of the Rustbolt Rebellion, and then when the location had
been discovered, a motley group of adventures to brave the city. I then
promptly got separated from the group, and completely lost, having never
been in the bowels of the city before. Once I found the path to the
King, I simply followed the trail of bodies to the chamber where King
Mechagon once ruled. When finally I arrived, I found the form of King
Mechagon, slain, and my group already gone and retired to a pub to drink
their new found riches. Fortunately, the band of adventurers were
honorable and kind, and left my share of the loot.  Since they had
efficiently wiped out the inhabitants of the city, I was able to spend
some time exploring the city, and capturing several of the little
critters in the city, who all seem to share in the mechanization craze
of the Gnomish inhabitants.


When next i write, I will expound upon my recent activities. Until then,
I remain firmly your friend.