Aprillian and Ashayo discuss another week of playing World of Warcraft, Blizzard's great MMORPG. Emails and a special interview with a confirmed Alta holic and Mage rounds it out.
What We've Been Doing:


Working on getting Aprillian to 58, she's currently 48. After she dinged, she went to Og to train Had her soloing in Felwood, doing the Jaednar quest, but she kept dying so I brought in Auntrillia


Thursday Morning
Since Aprillian was running out of rested XP, I took her to Tanaris to do the Gahz'ridian Ornaments quest. She would get a little XP from killing mobs in the desert and complete that quest for xp. Plus she can level up her herbalism. She started at 292, Collecting ornaments went well. There was an ally at the Eastmoon Ruins killing the ogres, and ignoring the ornaments and herbs. It was easy pickings. I had Pia on at the same time. She was over halfway to 10 and dong Fairbreeze quests. Aprillian finished and turned in the ornament quest and ended up with her herbalism at 295. She checked her log and found she had a quest to go to the Hinterlands. She hearthed back to Shat and then took the portal to UC and flew to TM. She didn't have the fp to Hinterlands, so she rode from TM. What a difference a few levels can make. I remember running through the Hinterlands and dying on other alts at lower levels who didn't have mounts. As she was riding around, she saw a ! in a Troll Mob village, she picked up the Venom Bottle Quest, then the Undamaged venom sac quest in TM. Which leads to a ZF quest. Good times. She flew back to Hinterlands and I left her in the inn to get some rested xp.

Meanwhile Pia's gotten to level 10 out that tower with the corrupted soil quest, and she's bumping up her herbalism from all the bloodthistle out there. She dings 10 and heads to Silvermoon to train. Along the way she passes Farstrider Retreat and pickes up 3 quests and then heads to Silvermoon. She gets the start of one of my favorite quests, the one where the buildins are floating in the sky. She also pick


Guest Triaa - Mage
Every class has it's give and take. I started with hunters because I like pets and believe they are the easy button.

It seems to me that the Mages get pretty powerful early on. Come on they make their own food.

Frost Nova and then fire. Spec fire until higher levels.

Hello Aprillian and Ashayo
This is Matahorn, a Dual boxer and a long time listener of the podcast. Also I am a fellow guildmember of Alea Iacta Est. I thought i would write to you and tell you how I Dual Box. I have 2 accounts but I play them together both on the 1 computer with 1 screen. I atl tab between the 2 characters. Matahorn is my level 70 Tauren Hunter and he is used to help my lower level characters through instances or hard any group quests.
I am also an Altaholic. I will start on a server with a hunter because I find them easy to level and I really enjoy playing them. When he hits 70 I then use his great money making ability to help out my alts. Another reason I love alts is that they are great for having the different professions and not having to rely on the AH for my goods.
Anyway I just thought I would write in. Keep up the great podcast and see you in the Game

P.s For the Horde

While setting up the podcast, I got an email from Glanthur. Always nice to hear from him. He writes: 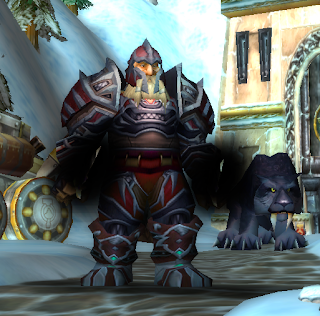 My first complete set. The boots and the belt are not part of the set, but I wanted to match to look pretty. LOL. What do you think?


http://armory.worldofwarcraft.com/character-sheet.xml?r=Earthen+Ring&n=Glanthur
Posted by Aprillian at 8:43 PM