The title comes from the fact that I have to go to a stupid family reunion .

I don't know what to do, if anything, with Ardrion. I have a certain fondness for him. He was originally named Ctrlaltwow when I started him on the server. He is now 43 and at 300 in LW, 300 skinning and 275 cooking. But to do anything else, he has to get to 50. Right now he's good for making armor kits for my lower level

Rilfire was fishing and not leveling, checked her skill window and she was 225/225. Did a quick search and found she had to go to Dustwallow Marsh and get a fishing quest. Surprised I hadn't done it sooner. She had to fly and ride to two different spots on both continents and fish until she got some speccial fish. Didn't take too long, just wish she had done it sooner and she would be levelling. Of course she got fish that she might be able to sell.

Monday night I got a little treat. Palanor, Glanthur's level 22 Belf Paladin, logged on. I tripled boxed with my 3 level 19's, Pri Orc Rogue, Relaq Orc Warrior, Ishaq Troll Priest, and the 4 of us went to southern barrens to do the egg collecting quest. We died a bit, but it was my first time triple boxing this treo and doing multi boxing without any pets. I'm loving the priest and the resurrection but I have to keep her alive. I'm thinking I might want to bring up a warlock and put a soulstone on the priest. Because Palanor was higher, he drew aggro off of Relaq but I can see as we get up higher, Relaq is going to be fun to play.

Wed morning took Rilfire. Pri and Relaq into Wailing Cavern. I wanted to level Rilfire's fishing from 225, but then realized Pri needed fishing too. I want to see if she can find a book without opening the crate

Rilfire left WC with Fishing at 252. Took her to Falcon watch where she killed and skinned boars. Trying to do more outland stuff, to get Outland greens for Auntrillia

EMA! (Extended Maintenance Again!)
Decided to start the grind on Ashield and Asheal to get exalted with the Shattered Sun Offensive. Great way to grind for epic flying mount , plus the rewards are very nice for someone decked out in quest greens and some blues.

Ashayo's raiding group has pretty much Magtheridon on farm status. Wiped on 3% because a cube clicker died, but downed on next attempt easily.

Had the opportunity to play in the beta of WotLK. Completed the Death Knight starting zone. It's like an instanced area - can't just ride out. The mobs arn't static - there is a progression as the quests progress. Pretty much hit level 58 by the end, so straight to Outlands.

AIE's Guppers (Gruul and unusual punishment) downed Gruul for the first time this week. And one-shot to boot. Gratz all round!

Levelling shaman with RL friends. Run them through WC. Forgot to skill up on skinning, so was stuck at 75 the whole run. Ran out of time to do the escort at the end, so will be back!
Fun to play with someone who has never played before.

The Great Mail Cleanout
Hadn't done it for a while, and was reaching the point of mail being deleted.
Decided to level cooking on Hiide (2nd account). Had rediculous amounts of meat and fish on an alt, was just a matter of getting all the recipes. Mage very useful for that - porting here and there.
The Aldor rise has a brazier - which can be used for cooking! Also, can land near the Scyer fire and use that - and have a Scryer alt get spices from the nearby vendor.
Got up to 365, and ran out of high level mats. But still have enough to level another toon!

Email 1
Hello to you, Aprillian and Ashayo!

To hear my email read aloud over the interweb was... I have to tell you... an awesome experience...
To hear great celebrities such as yourselves endorse what I have been doing was even more so!
Y'all brought a tear ta my eye... =*)
but... to actually WIN your contest!
Man... is THIS what celebrity feels like?
It's AWESOME!
I promise to only use my newfound powers of fame for good, rather than evil... hehe


Screenshots!
As per your request, I have enclosed a number of screenshots of Tahrzaan's (mis)adventures in Azeroth... I'll send more upon request...
I mention a few scenarios on the blog I have set up detailing Tahrzaan's journey, but sadly I don't have any screenies of some (the Isha Awak kill in Barrens, for example)... and now it's too late to kill him...

As an aside, I was actually wondering if there was any tasks, hints, tricks or advice areas that you might feel could be an addition to your show.
Oddball Stuff... or News of the Weird and Wacky...
Or something like that...
I will compile a list in the days to come and see if I can't come up with a whole host of cookies, "secrets" or other things to make peoples' experiences in Azeroth THAT much more fun...

Like...
- the fishing book that allows you to see 'pools of fish' on your minimap, and where to fish it...
- the new fishing quests (like fishing up Mr. Pinchy)
- little 'easter eggs' in the game content (like while fighting your way through the Deadmines to get VanCleef's head you'll encounter a Goblin Shredder. Kill it (and the goblin that pops out of it, then look at the dashboard on the Shredder. Unless they changed it, you'll see a familiar face: Kerrigan, The Zerg Queen from Starcraft: Brood Wars. She appears to be the ruler of the goblins as well! Other goblin shredders can be found in Stranglethorn Vale, Ashenvale and Gadgetzan.
- or other off-the-wall ways of making gold in Warcraft (or you might keep these tricks for yourselves... but since your count was at above 2000g as of the last podcast, I somehow doubt you're overly-concerned about in-game finances...)


If you think it'd make a good addition, let me know (or let's chat a bit so we can see whether personalities are compatible!)

Thanks again for the callout in the podcast! My co-workers were looking at me strangely when I suddenly heard my email being read over the podcast... as I listen over my iPod, all they saw was me cheering at the ceiling and yelling 'Woohoo!' =)

Thanks again for an awesome podcast! 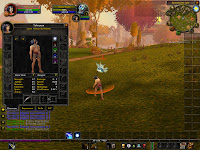 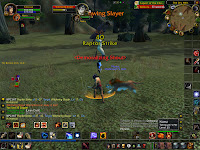 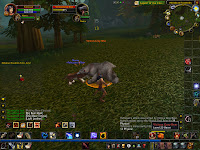 Just listened to the podcast... As always a great episode, the link to mine is http://sacred.kkotd.com If you are looking for tons of them (quite a few from AIE ^_^) you can check out http://wowwiki.com/podcast They are trying to clean it up from all the inactive casts but it can take around 12 hours of your life to listen to them all.

Thanks,
Dave aka Theranos (Fur an oes like in toes) Most people can't pronounce my name ^_^

BTW: Alt story, we took all of our bank alts out to Silithus one day, then as we hit Silithus we told everyone to hit the / key to walk. We said you could take any path but you had to keep walking! The first one to Southshore won 1000G for whatever they wanted... We started with around 20 people and ended with around 4 people two and a half hours later... O by the way we forgot to lay down the rule of no Flight Paths but as most of these alts had never left Ironforge, they only had 1 or 2 flight points so it still worked out. That has to be one of my most fun, alt related activity! I am looking for screenshots but I think most of the people have left the guild that took them so *_*... O well I will post screenshots for the Night Elf thing once we do it ^_^...

Also FOR THE ALLIANCE RARGH!

Hey guys wats goin on been listing to ur podcast for about a month now and I thought you kno for being on the horde side u guys arent to bad lol jk. Ok so a lil background info im a Lvl 30 Draenei Mage on the Detheroc Server my name is Heon. Ok so my question is even tho im a mage and all mages main weapon is either a staff of a wand but if you go to a weaponsmaster i could either learn daggers or one handed swords would i benift or do more damge with the blades or shld i just stick wit the staff or wand. SO ya their it idk if yall cld help me out or you kno someone who cld ur help would help me alot. Thanks again and keep of the podcasts

Hey again Aprillian and Ashayo, its Triaa again. This week I have a great addon for saving space and clearing clutter from around your minimap. Have you ever wondered why there is so many buttons around your minimap? Minimap Button Frame takes all of those buttons and then shows only one button around your minimap. When you click on this button it opens a frame showing all of the other buttons that were around your frame originally. One great advantage I have found is that it is supported both by titan panel and Fubar.
Here is the link I recommend downloading it from: http://www.wowinterface.com/downloads/info7929-MinimapButtonFrame.html

On another note I finally bit the bullet and created the stereotype night elf hunter this past week. What I enjoy most about my hunter is probably my pet. My 22 hunter has a boar named porkchop :) The name was suggested by one of my friends in my guild. So if you are on the US Lothar Server and see a night elf hunter running around with their trusty companion porkchop don't hesitate to say hey.
--------------------------
Thayloo- 70 Mage
Triaa- 70 Warlock

If anyone has any questions about mods or anything pertaining to them you can email me at wowwarlock2@gmail.com
Posted by Aprillian at 12:45 PM