http://ctrlaltwow.podbean.com/2013/01/23/ctrl-alt-wow-episode-304-thanks-alex/
Aprillian, Rogueslayer, Tedrah and Rho from Realm Maintenance Podcast discuss another week of playing World of Warcraft, Blizzard's great MMORPG. Contest Ongoing send an email to ctrlaltwow@gmail.com telling us how you play WoW, either as an altaholic or dealing with it in your family life to being placed in a drawing for a WoW Pet or an Authenticator. 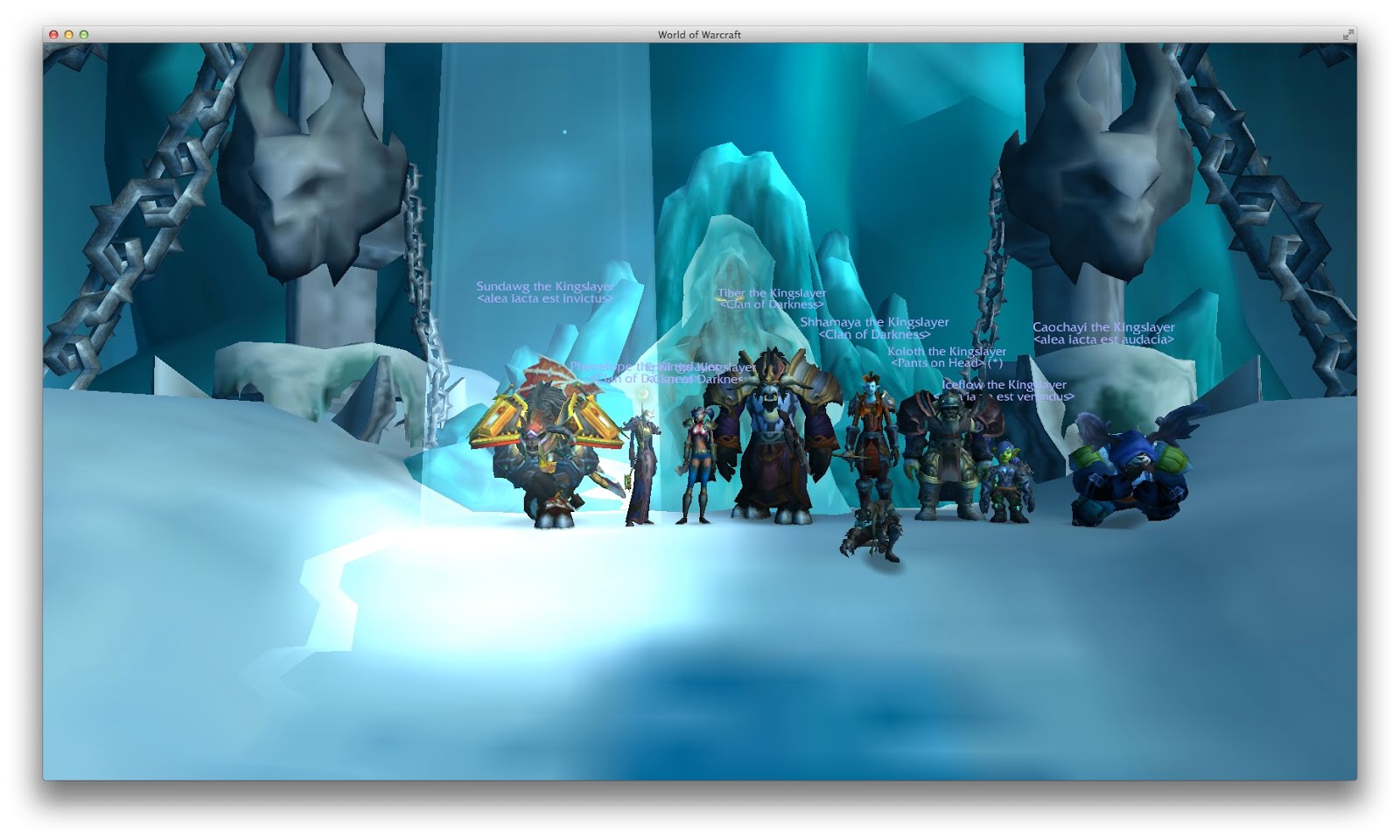 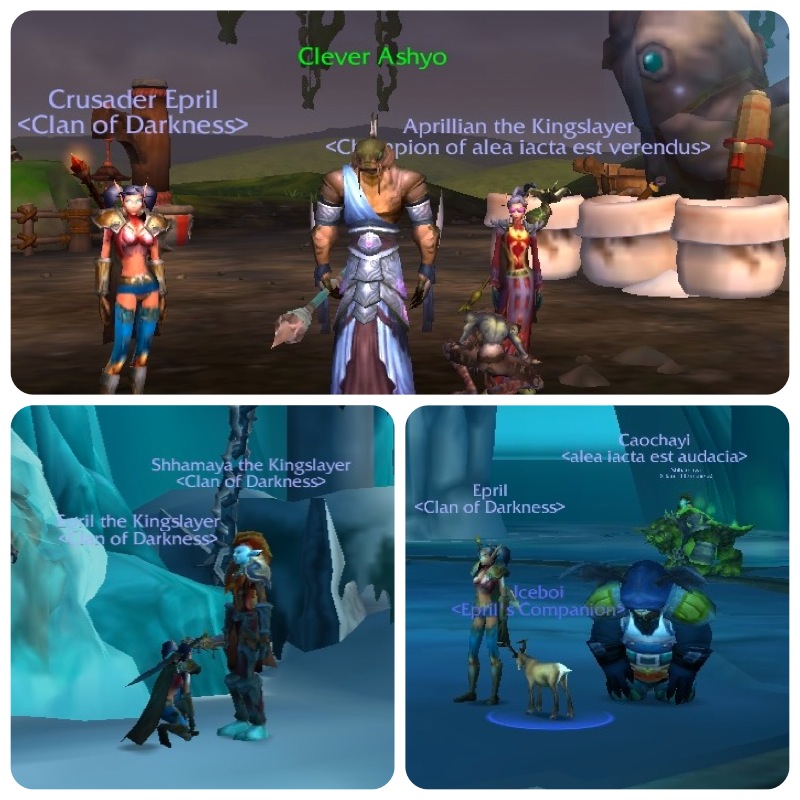 
Pet Battle Melody
Hello to everyone at Ctrl-Alt-WoW!

I can't really say what I've done ALL week, as I'm sending this on Saturday. I'm sure the rest of the week between podcasts was fun, though!  Voltandra and Everrose took some advice from last week's show and geared up with Herbalism and Mining bags, respectively. Worked out great - thank you!

On last week's show, we did talk quite a bit about pet battles, and someone mentioned needing a pet battle song. Perhaps the attached will do?  I hope you enjoy it. Thanks again for letting me guest host last week. Although I can't even imagine being as awesome as Ashayo, I did have a great time!

Have a great week, everyone!

Not much activity on my Level 90s on Korialstrasz except tending the farm. Spotty internet connection, birthday parties and football this weekend grabbed most of my time and attention.

I have been leveling my Clan of Darkness hunter and a Warlock on Korialstrasz a bit this week and that has been fun. I haven't played either class much and they will probably be the next two I level up to 90.

Other than that it was been mostly work and spending time with the boys. I've been listening to the CAW catalog trying to catch all the episodes I missed before I started listening to you guys. Is there a CAW loremaster achievement?

Anyway, between watching depressing episodes of Intervention and learning that my brother has cancer, I've needed a little WoW time to escape. Have a great week everyone.

Is Clan of Darkness accepting new members ?  I am assuming this is a Horde guild.  I have a level 29 Blood Elf Pally on Lothar that I am looking to move.  I find that I favor the RP realms over PvE realms, less idiots

Yes I have to agree, I find the whole pet battle thing very cool and very addicting.  I find that I have been sucked back into WOW once again (I gave up WOW for about a year).   It took me hours and hours re-setting up all my past MODS and macros.  But its all good

So damm early
Lets see what can I say but thx dizni and pixiegirl big hugs to them both and here’s my audio. By the way christopher eccleston is second only to the great tom baker when it comes to the Doctors.
Big G

(Ayup is Yorkshire speak for "Hello, how are ya")

Attached is a short audio update. I managed to have a few minutes of quiet in the office and threw this together. Hope your all having an amazing 2013 so far!

in this past week i had the honor of being part of the (first?) CoD raid on ICC where we
killed the Lich King in our 3rd atempt. I was really impressed by the performance our
raid made, due to the fact, that many of our raid-members had never seen the fight
before, so i really want to congratulate CoD on a Raid well done.

As for the progress of my CoD toons this past week:

i really only got to play my hunter, Wanrong, this week, and she has, at this moment, made it to lvl 65.
I hope to get her through Outland by the end of this week and enter Northrend.
She's reached Skill 358 in mining and Skill 325 in Jewelcrafting by now, but again, she will not
go to Northrend before she's got both professions up to WotLk level, so she doesn't have to fly by any
node, just because she can't mine it yet (nothing is more frustrating then not being able to get that  ore
or flower, just because that 1 skillpoint is missing).

See you all in game, and best wishes

It's all about the mounts, oh yeah!

Hello CAW Crew!
Morgaine here, since Wren is working right now.
So Wren and I got our horde pair (His Tauren DK and my troll Disc priest) to 82. It's so amazing how much quicker leveling is in that range now! We hope to grind out getting them to 90, so we will have a pair at 90 both horde and alliance.
In Wren's world, He looted the green proto drake mount from oracles rep. Only took him 4 years! He also finished the landfall quest line alliance side and got the new high res gryphon and wyvern mounts (yay!). Besides all the mounts collected this week, Wren hit revered with golden lotus (took forever!) and got his alliance monk to 82.
In Morgaine's world, I've been chomping away at all my dailies and professions. I got my Fishing, Cooking (overall, not the individual types- though close in each), Alchemy, First Aid, and Herbalism ALL to 600. Last to tackle is Archeology- which is going to be a LONG journey. Other than increasing all my reps, hitting exalted with Tillers and getting my full farm to work on, just been busy doing projects around the house. (Real life stuff, who wants to do that?!)
Anyways, Have a super day!
For the Horde, For the Alliance, for the "I Got that damn drake finally!!!!!"
Morgaine and Wren

Clan of Darkness
Hey gang! Here is this weeks audio! Just under the deadline I hope! Man this stuff is hard! But fun! You all are awesome! :-)
Donnie

Posted by Aprillian at 7:26 AM