Good afternoon Aprillian, Leeta, Beth, Tedra & Grand Nagus :)
Hope everyone is kicking butt on the game and is life!

Had a great week in-game, boasted my Panda Monk too 90 went right too the farm and messed up big time! Excepted the first quest from Farmer Yoon, planted the two cabbage and this is where all went wrong! I didn't go back to him the second quest, instead crabbed the watering can & watered. Then saw I had another quest from him picked it up and well, dug, replanted, dug replanted this went on for about another 40 cabbage seeds. Which by the way my Panda couldn't buy yet, after the 3ld day of trying for the dry cabbage gave up opened a ticket and a day later all was good :)
Then took her out to the Timeless Isle, got some coins, bought kites and flew up Ordon's and got her first Burden. But while I was out there Huolon came up so I fought and died lol Then took her back to the farm and logged out, later that night I logged back in and started cleaning her bags out. Saw something that looked kind of funny and too my surprise she got the mount! Of course she can't ride it yet but did get to learn it so my other girls can :)
I wasn't going to boast anything for a while but thanks too the support I got from are awesome guildies and Rokwyn saying well you know that's what the web is for and guild mates to help you learn, I'm really liking my Panda. Thanks guys :)
Just in case our sweet Leeta forgets to tell you who the pets are from this week, you know she, as a few others have really helped me with pets to level and donate. And I want to send out a great big thank you for doing that, I've now been able to pay for my repairs lol   Anyway this weeks pets are Sinister Squashling from Leeta & Skunky Alemental from Willopelt :)

And I also want to say hi & welcome too all of our new guildies, and old ones too :) Glad to have you with us, please do not forget to ask if you need anything that's what were here for :)

PS don't forget tonight's raid starting at 10 pm eastern time :) Oh also got my Hearthsteed only cause two quit so I won those games Woot! 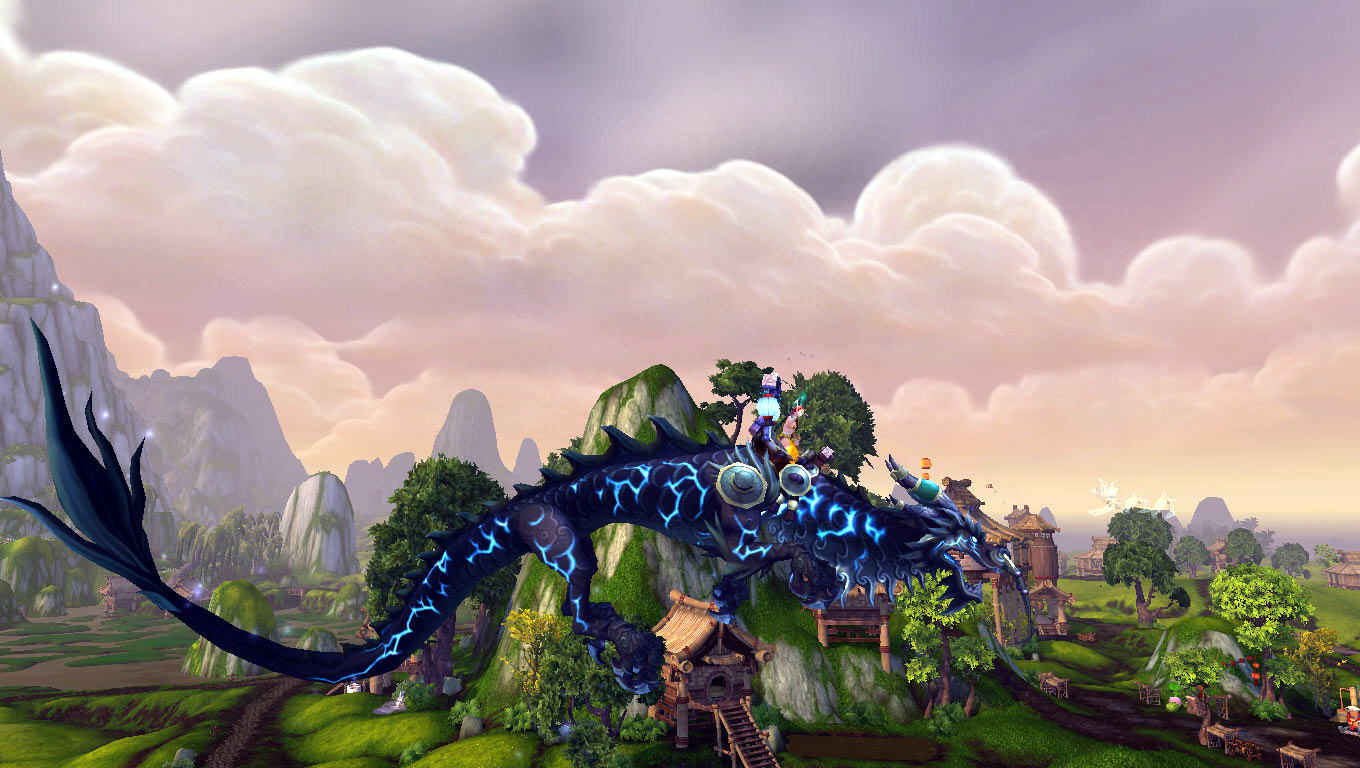 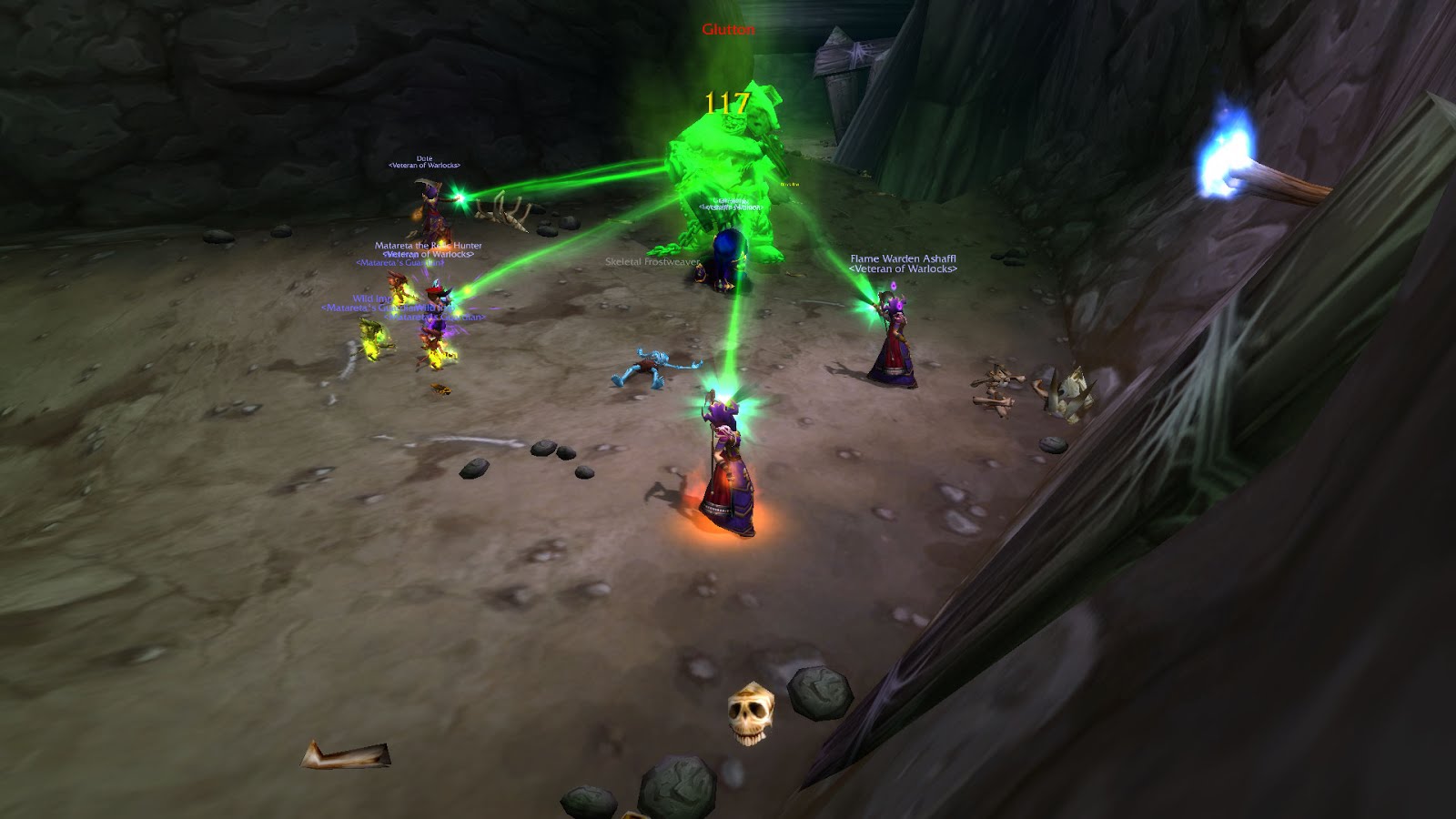 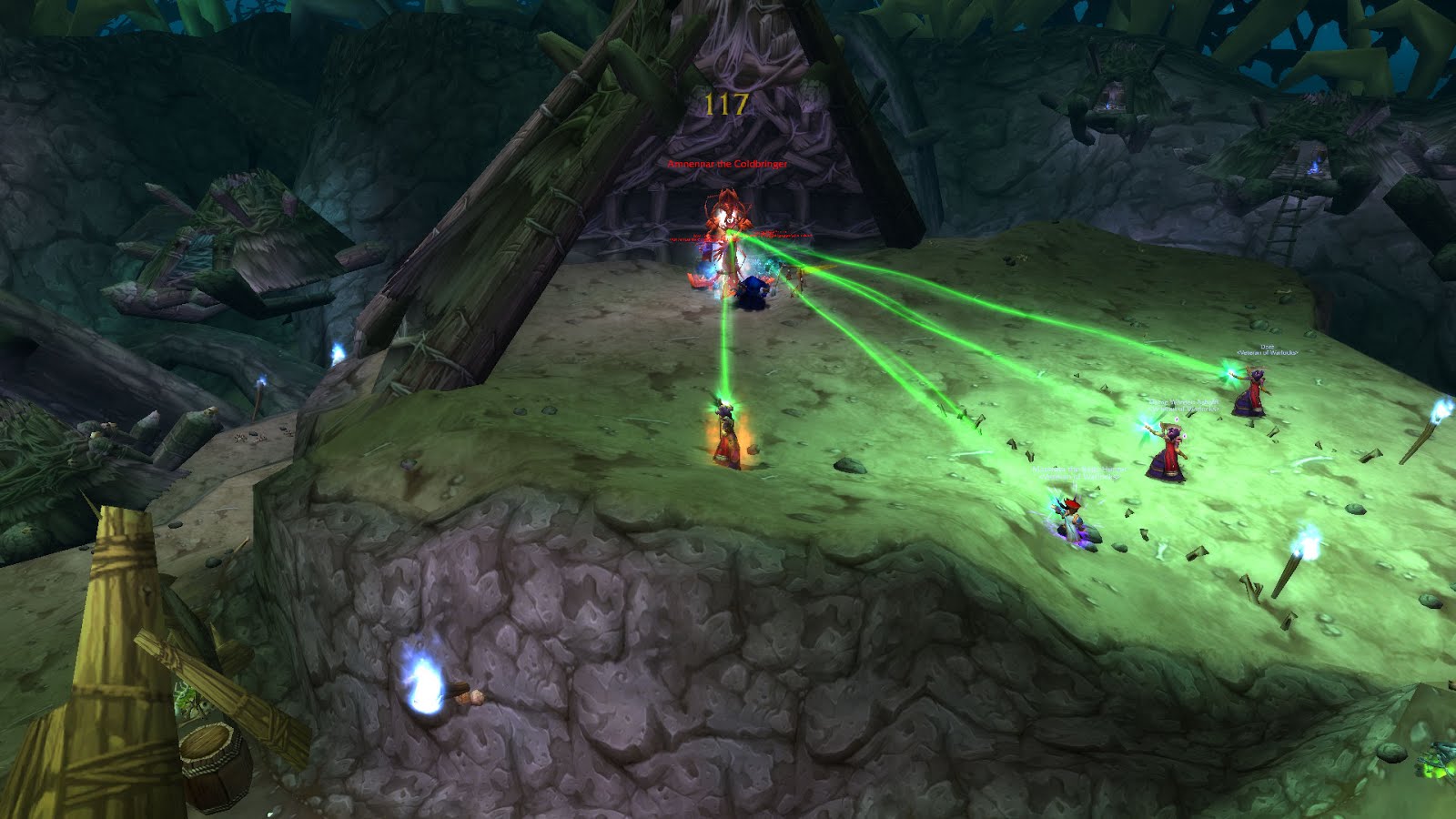 Then there was 3 - Mata had to leave so we finished the rest of Razorfen Downs! 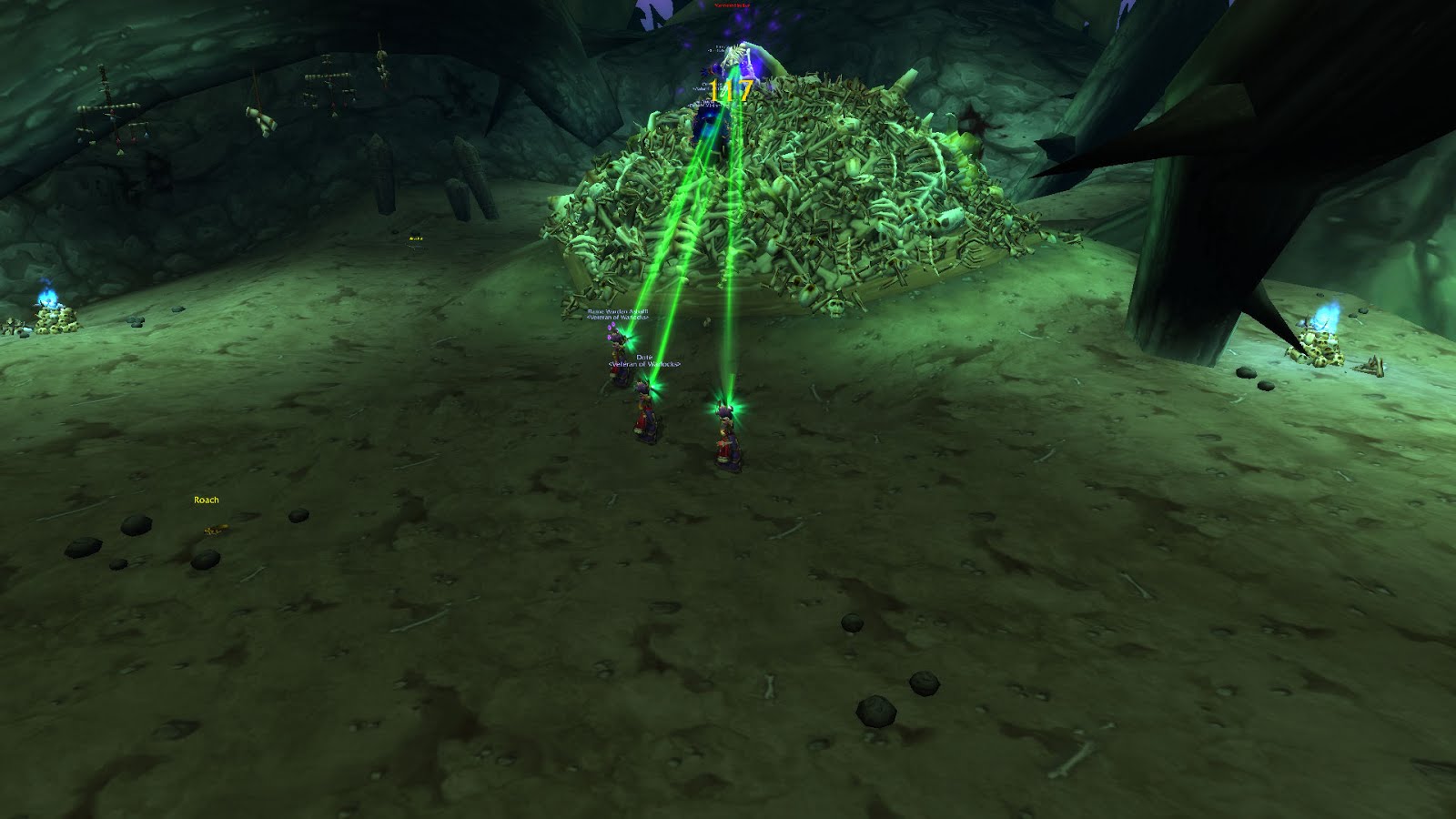 Then we headed over to Dire Maul - last section. Here we are looking very Warlocky on our Steeds 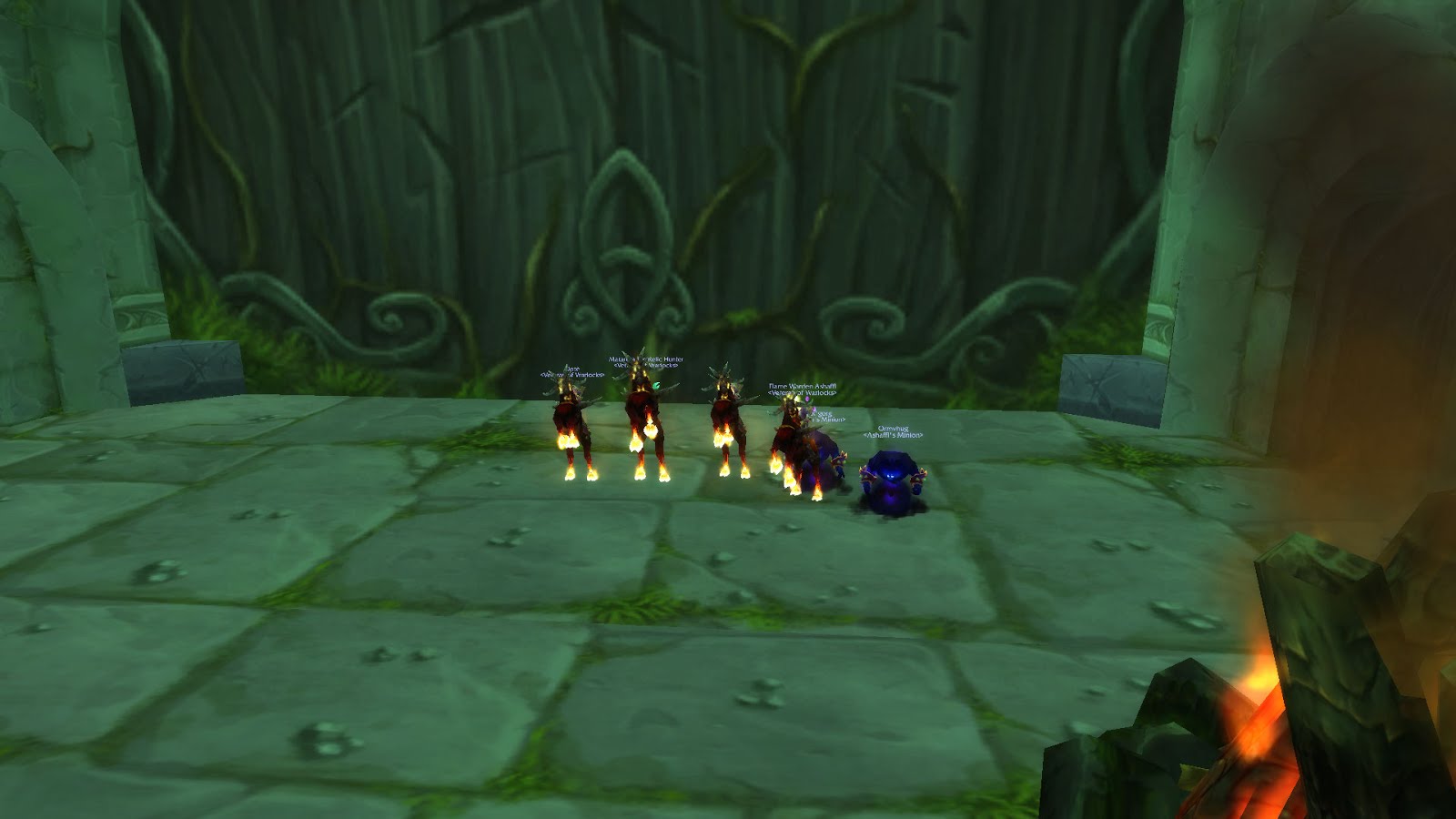 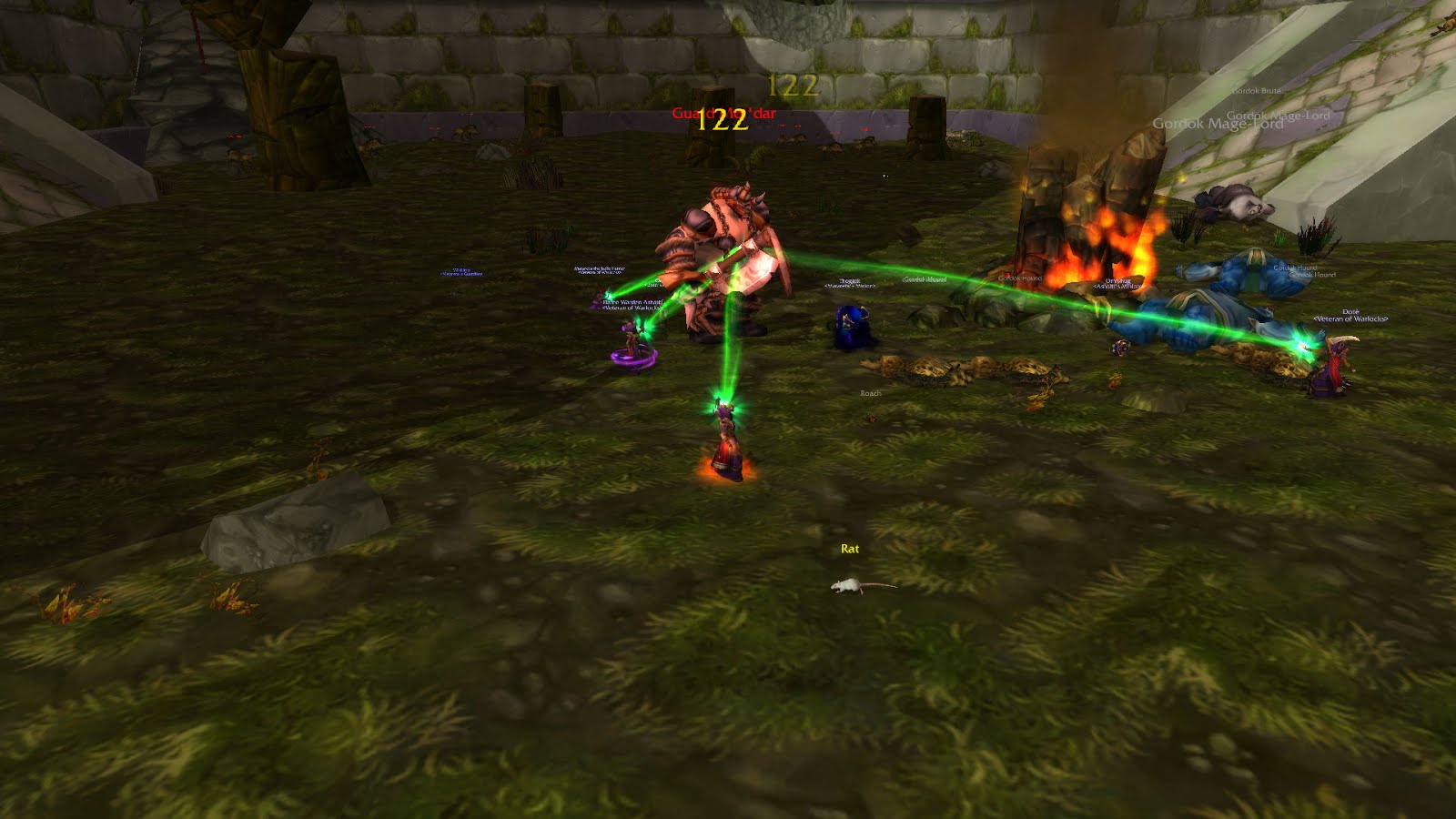 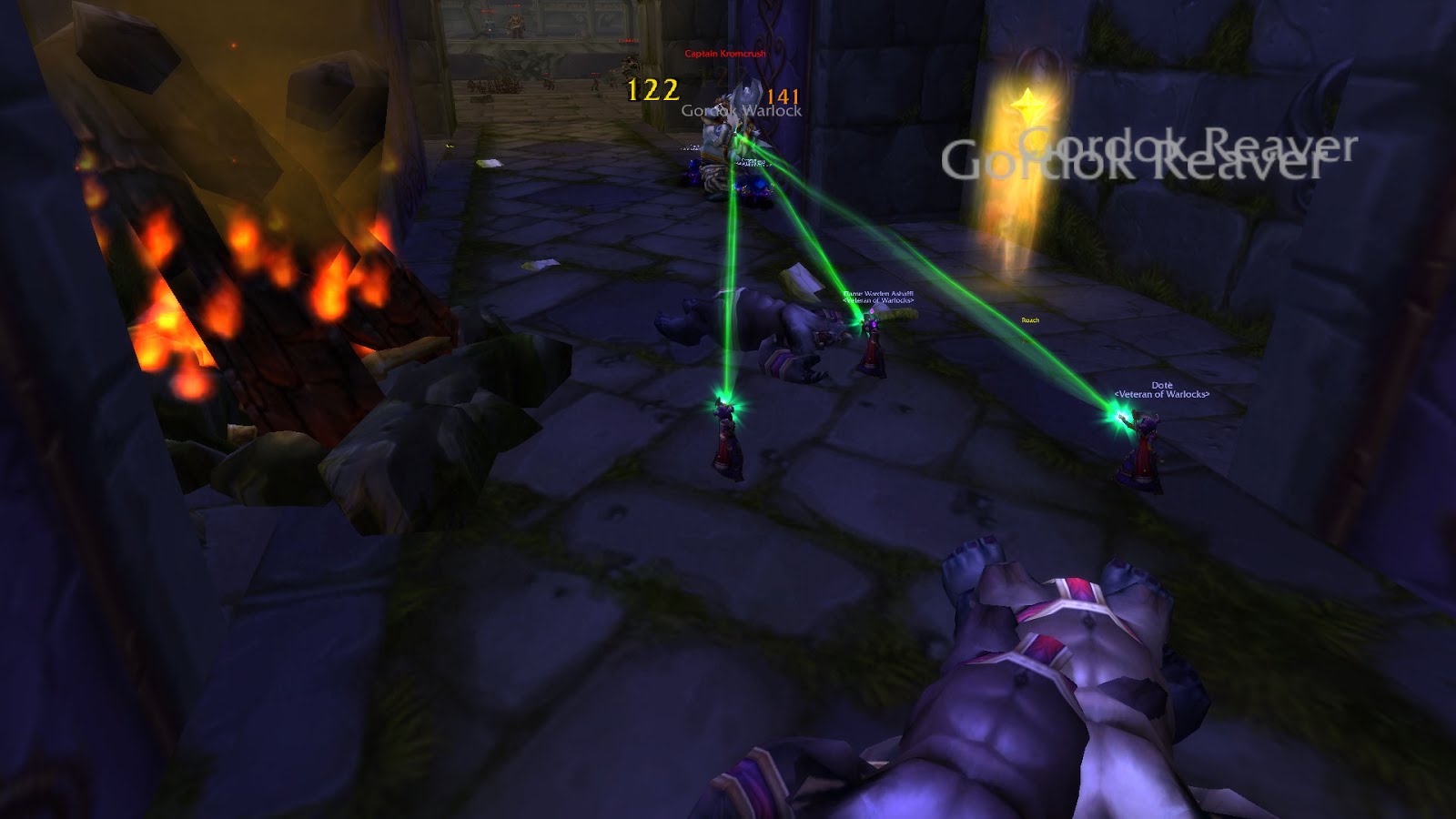 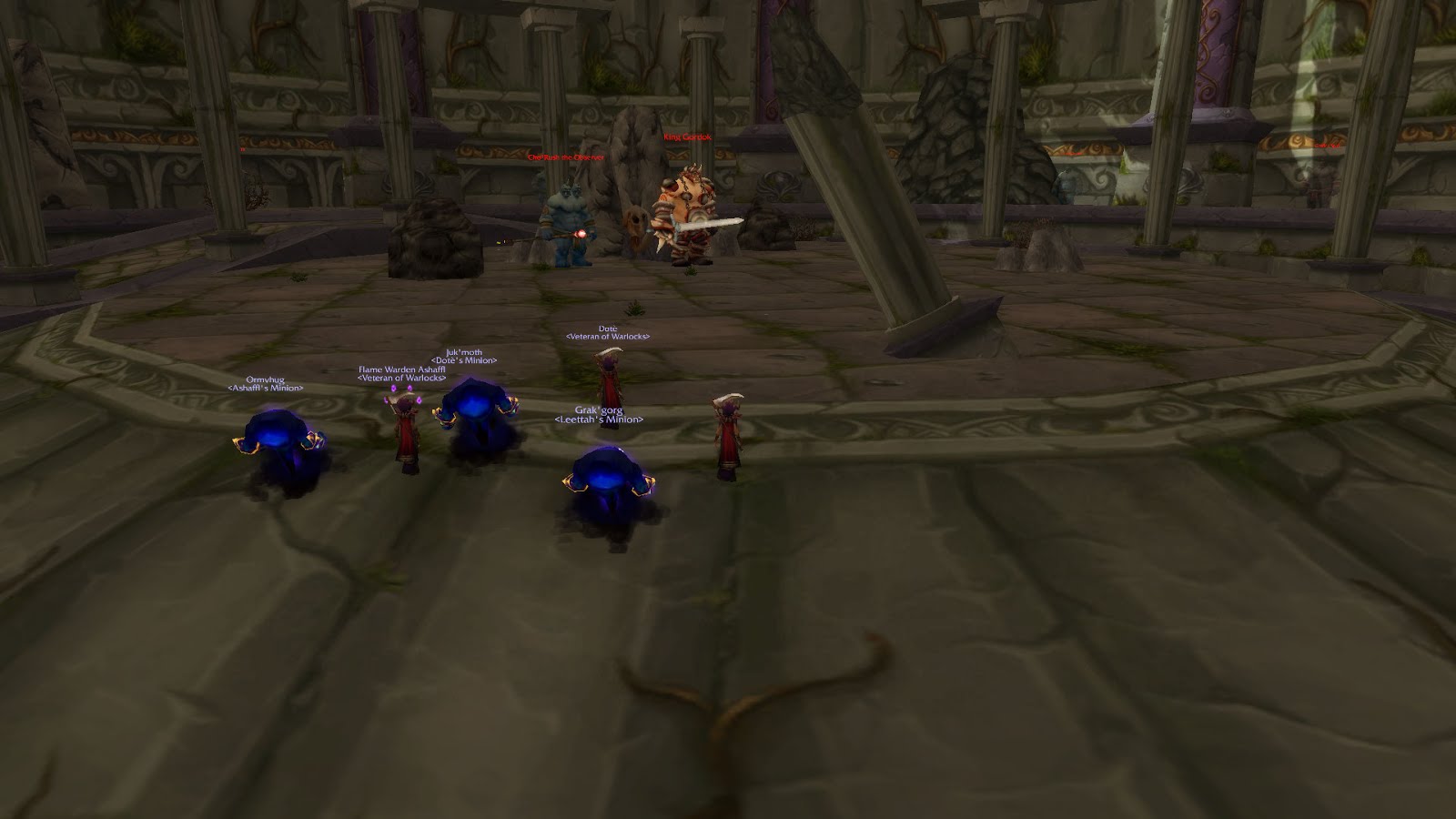 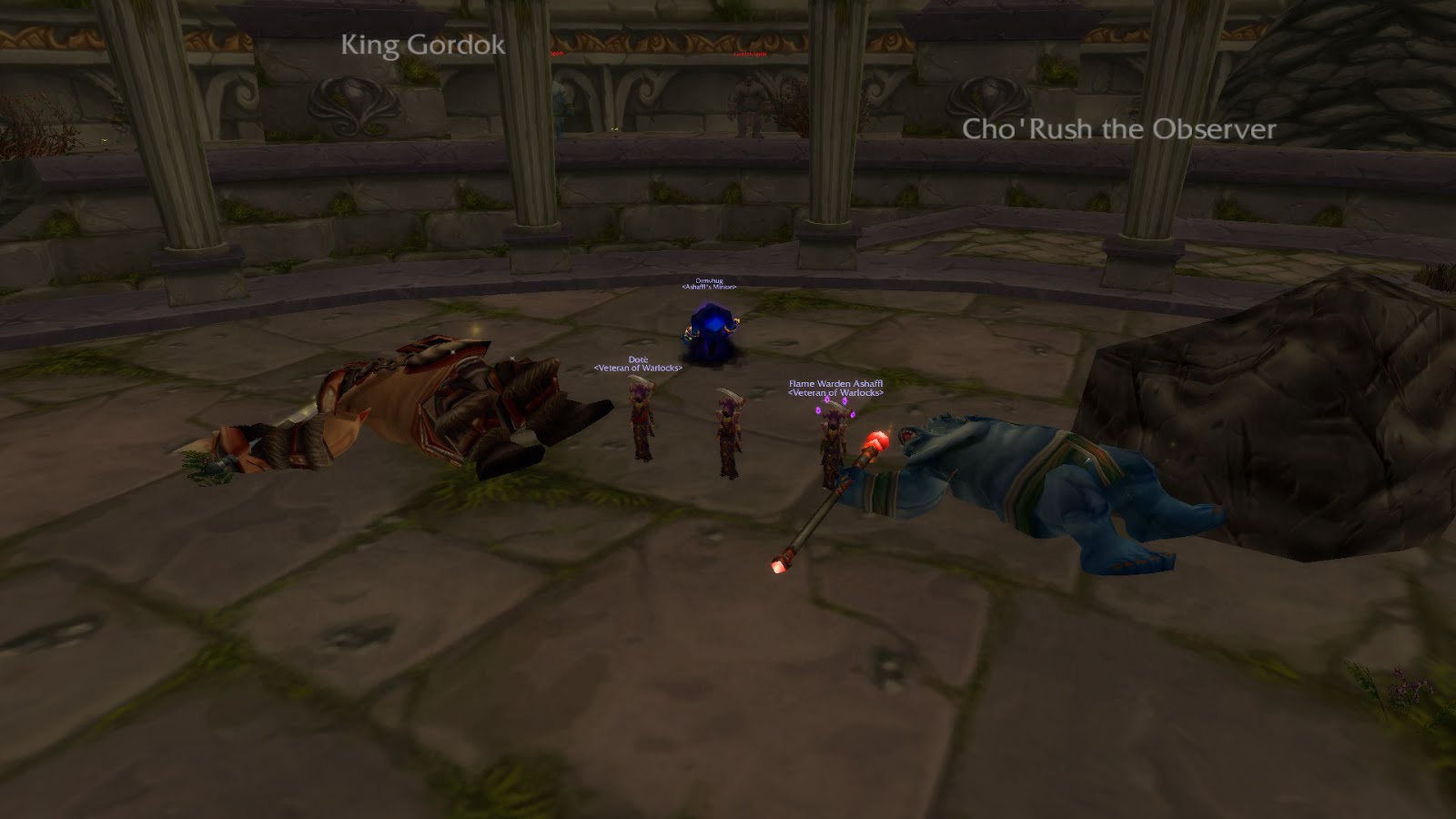 2/ HoT - Druid
Wingy ran me through some Wrath dungeons. Went from Lvl74 - 76.
Plus did some more quests and herbing in Sholazar Basin - hit Lvl78!
Then last I was able to get the quest to go to The Frozen Halls dungeons (ICC 5 mans)
So off we went - ran The Forge of Souls, The Pit of Saron and Halls of Reflection. 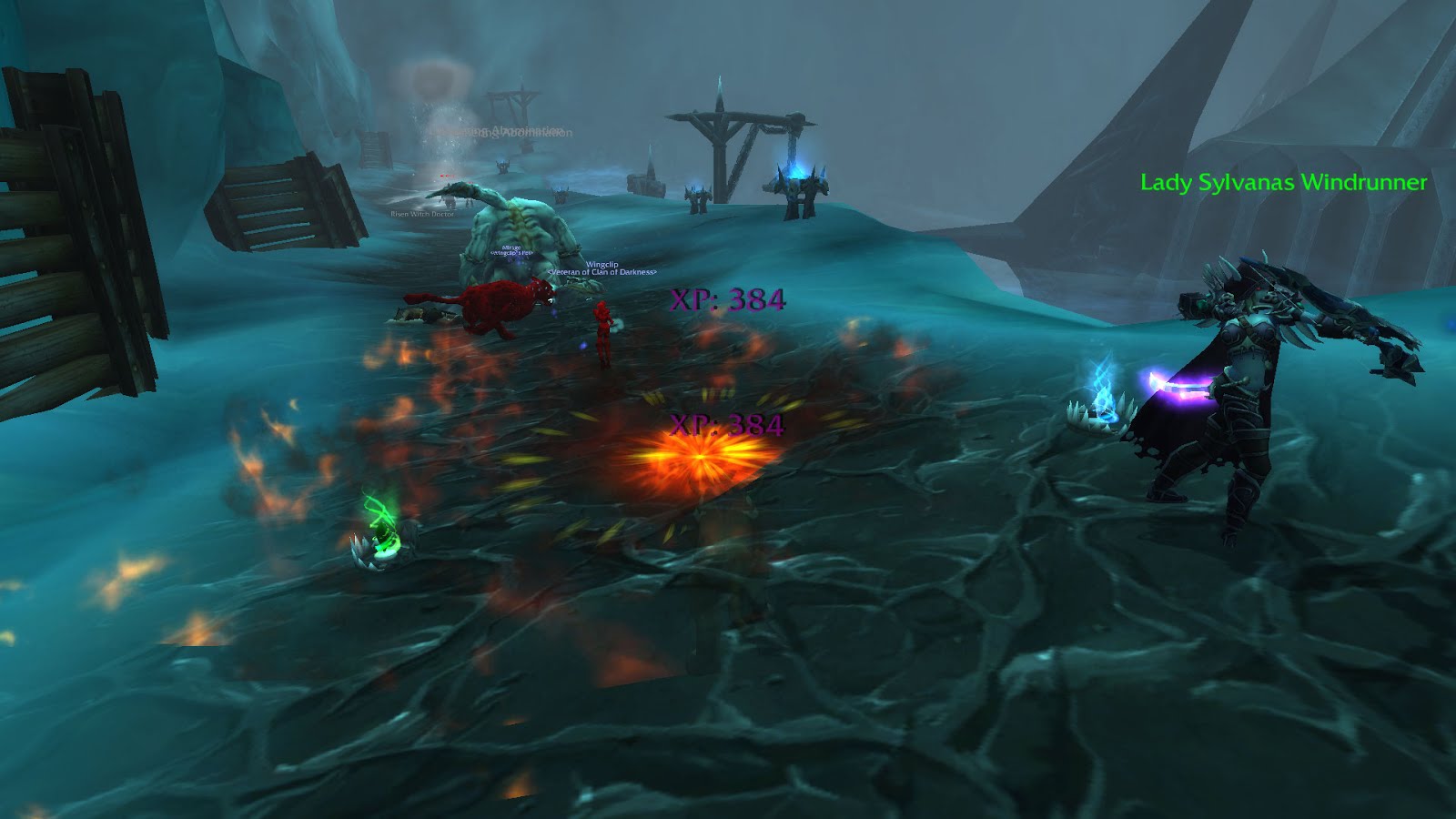 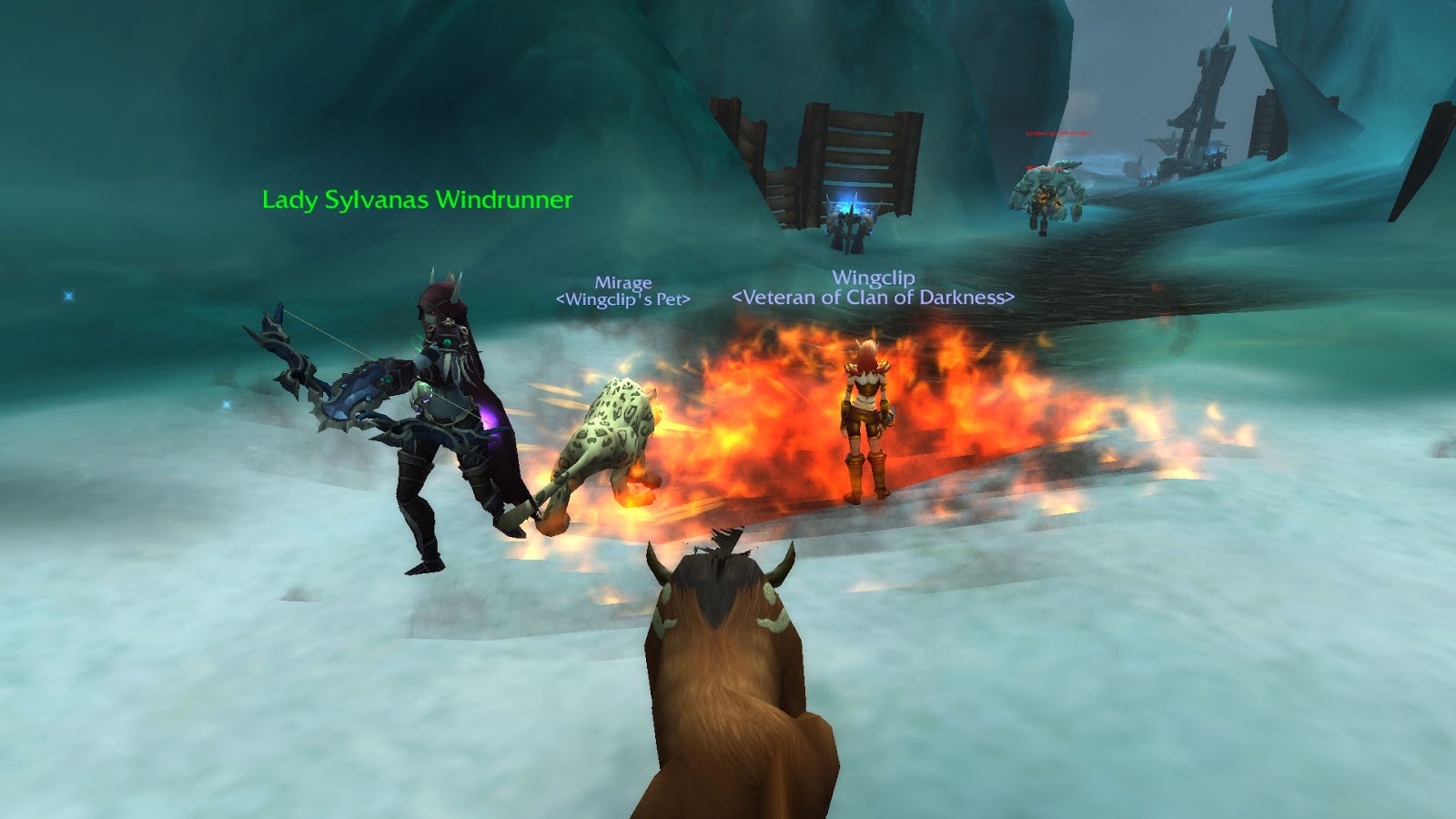 **When running through dungeons you can only do 5 dungeons per hour PER ACCOUNT!!**
Here I am helping Sylvanas!!
So because we could run no more dungeons until the dungeon lock had reset we went a questing in Storm Peaks!
Then finally… DING!!!! Level 80!! 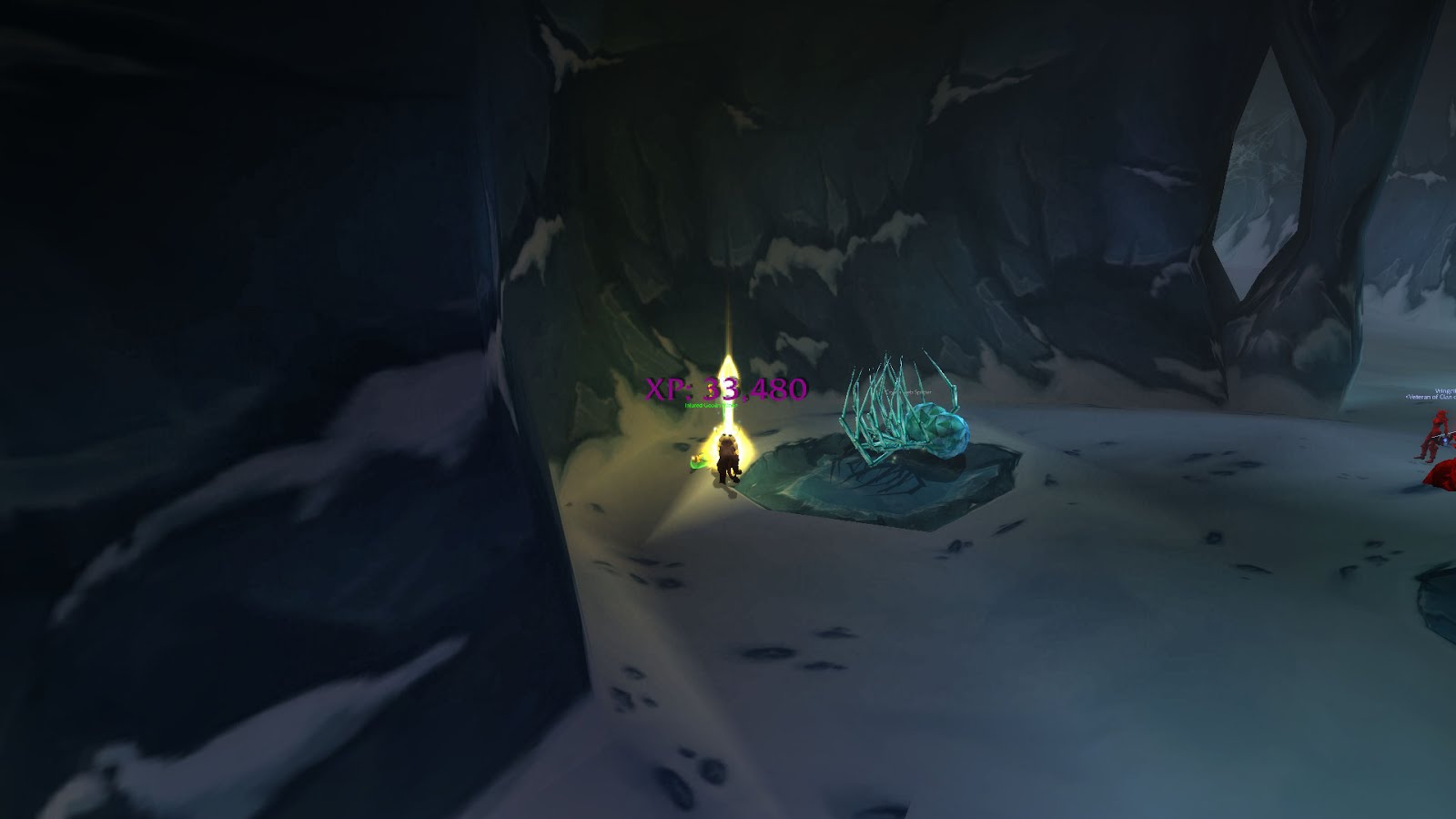 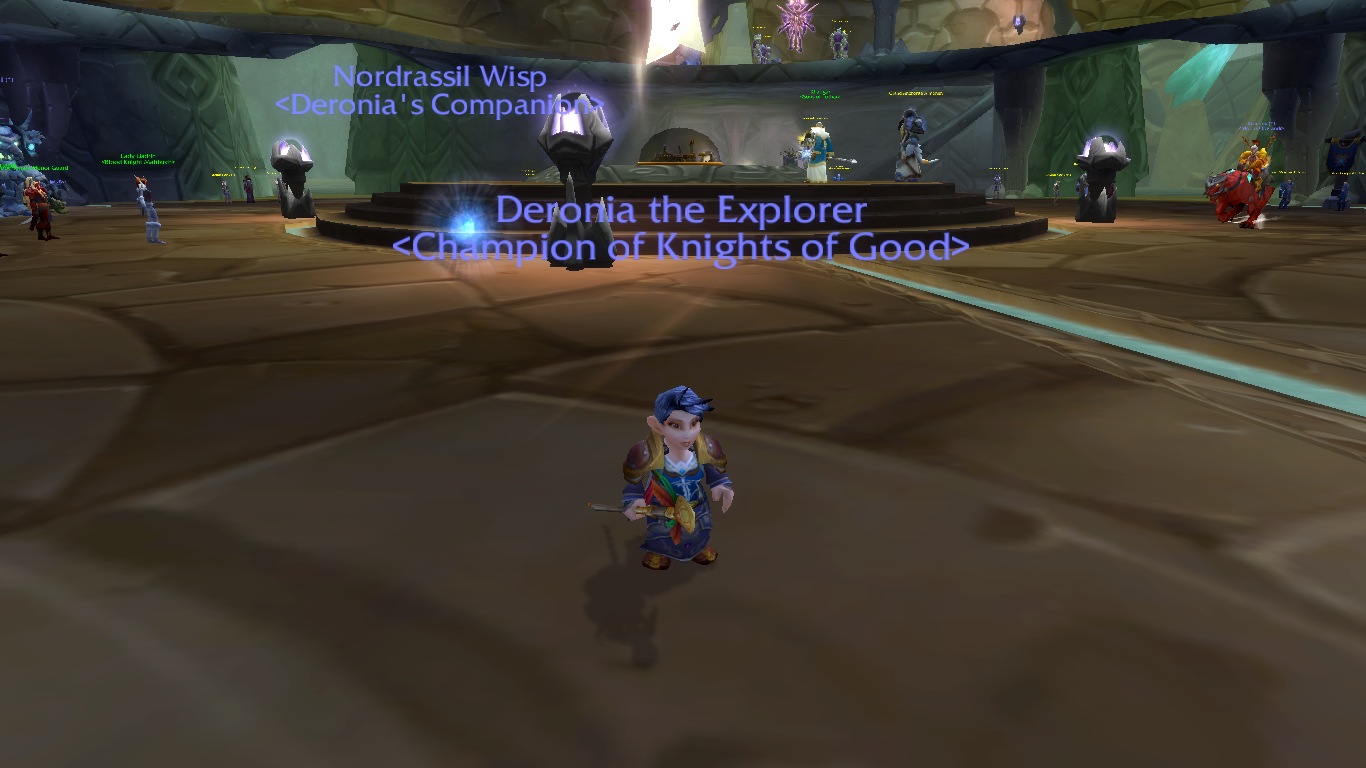 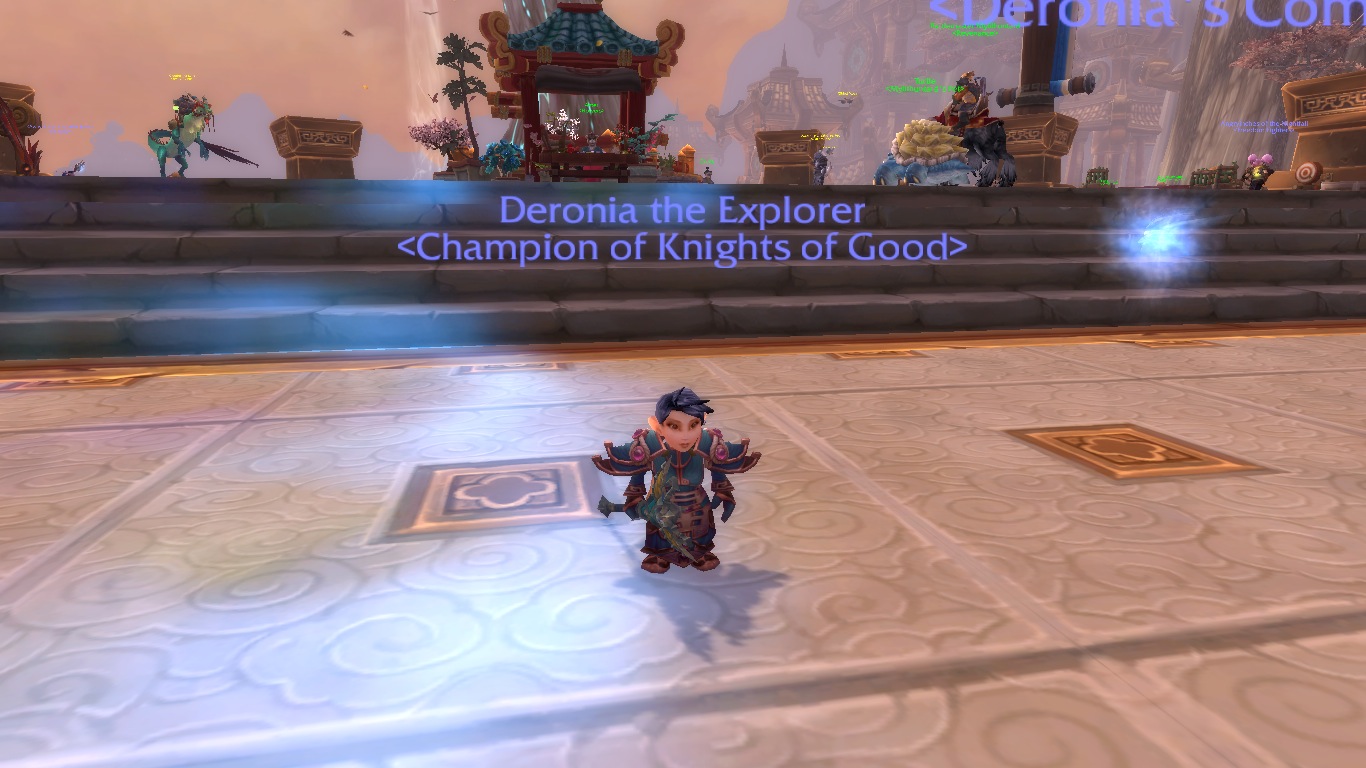 Don’t forget to re-do your glyphs.

Gives Pandaria flying, but only two flight points. Got double-dose of dread mount and pet.
Told Julie about it - lvl 90 blood elf hunter. Tamed her first wild pet!
Took Deronia right to the farm
Phase difference in Jade Forest - brought over Zelre from Robot House, the old fashioned 85 way, caught up for Lorewalker Cho line.
Lvl 600 mining, but no smelting recipes. Off to the trainer
Brewmaster Darkbrew of guild Brew Boys

My WoW Life
Hey Control Alt WoW! Been a while since I emailed you so figured I would send one in and tell you how I play wow :-). I have played WoW since vanilla and when I first started I was just a casual player. Just enjoyed the leveling and running around. It wasn't until BC that I started raiding. Even then it was just some casual raiding but I still have wonderful memories of Kara! When Wrath came or I rolled my current main. A prot warrior. From there I was hooked on tanking. I got into a not consistent raiding guild and even tanked the GDKP runs for my server. In Cataclysm I became a hardcore raider. Went for progression and lead a team to 5 on server for Firelands and then was tank for first alliance heroic Deathwing kill. When MoP hit I went casual and did some pvp. ATM I still raid casually but have grown fond of alts. Of seeing the game from different perspectives. I just Boosted druid and run resto/balance and I am having a great time with it. Will soon be giving my shaman a bit more attention in the near future as well. Wow is a casual thing for me now. Something to just get on and enjoy. Not stress about time and things that must be done. That's my wow life :-)
Thank you girls very much for your podcast and keep up the good work.
For The Horde!
Ludoshock

It's Bemmo!
Hello all,
Hoping that you are all well and sending positive energy your way.
Take care
Bemmo

I thought I'd be kind and write my priest's name out phonetically for you this time:  In-tar-zha.  Rogueslayer was close!  :D

Anyhow.  I boosted her to 90 last week - obvy.  I thought since I know the class it would be the best option, and then I can start leveling a new class.  I've got all but three of her boost gear changed out for drops from the Timeless Isle.  And I took a chance at the casino - Bonkers on the first try!  Now I'm scared to try again....  >.>

Speaking of new class - I'm leveling a Warlock now: Goblinbabe.  (You remind me of the babe!) And I think I may have had a lapse in sanity because I signed up for the last Herald of the Titans slot with her.  I promptly asked how to 'lock on the guild fb page!  Whoops!  But she's at level 20 as of this morning and all is going well.  I'm doing demonology until level 30, and then I'll dual spec her into destro and start learning how to dungeon. But!  I have a felsteed!  I'm so excited!  It's so firey and pretty!

My daughter has been on spring break this week but I still have to work.  Is it bad to be jealous of your kid?  She's been playing an MMO of her own lately - the How to Train Your Dragon one.  I'm going to set her up a WoW starter account next month to see if she likes it (I promised her that she could try when she was 8.)  I can't wait to start playing with her!

On a slightly more serious note (and because of all the confessions lately and the lack of crying on the last two podcasts.  :)  )  I love the community in this group.  It's amazing.  It does seem that quite a few of us are a little "broken," but I believe that if a person has truly *lived*, they are going to be a little broken.  It's what life does to us.  The true measure is whether we keep going, and what we become from our experiences.  I am a single mom - no easy feat in the best of circumstances - and went through a nasty divorce that dragged through the courts for over three years.  The marriage was unhappy and I was glad to be out of it as soon as I got over the suddenness of the life change, but it did scar me pretty badly.  Unfortunately, it did not have a minimal impact on my girl either, but she's strong.  I've had employment problems and money problems and a ton of other issues, and there was one time when I sent a letter to my best friend to give to my girl when she was older...thankfully he talked me down from that.Now, when things feel like they're getting too rough to handle I remind myself that I have friends and a spunky kidlet to keep me going.  And it has.

Now.  NO MORE CRYING.  It's time to go level a warlock, battle my allergies, and see if I can overcome insomnia.

-Rain
For the Horde, and for the felsteeds!

Posted by Aprillian at 5:43 PM