WELL...this is the weirdest message I've ever sent you.  It's completely unscripted and I'm not drunk.  I'll most likely regret having sent it to you, BUT...it's my birthday!  And when you're feeling weird & wacky & happy you should sing!  Or go the loony bin...one or the other.  hehehe.  ;)

1/ Pet Battle Weekend of XP Excellence!
My hunter Keillah went from Lvl93 - Lvl95 just doing the Pandaren Tamers and Panderan Spirit Tamers!
XP was crazy - with Safari Hat, both Pet Treats and the Pet Buff you could take a Lvl14 pet to Lvl25 in one fight!
Managed to level over 40 pets to Lvl25!


2/ Iron Leitta - Horde Hunter - Lvl25 - Lvl27
Took her through Silverpine to get flight paths and then headed to Hillsbrad Foothills.
One of my favourite quest chains -  http://www.wowhead.com/quest=28400/heroes-of-the-horde 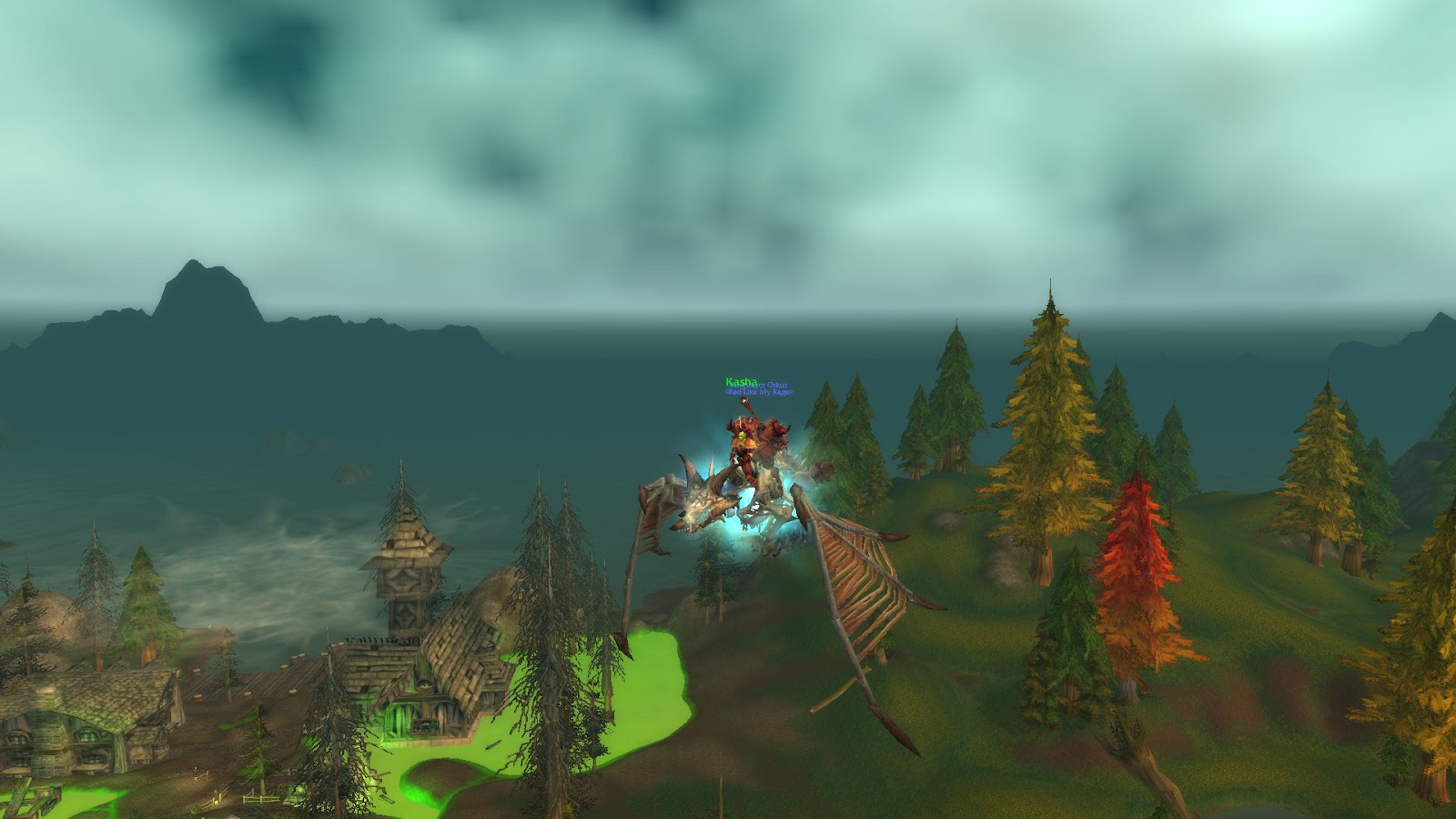 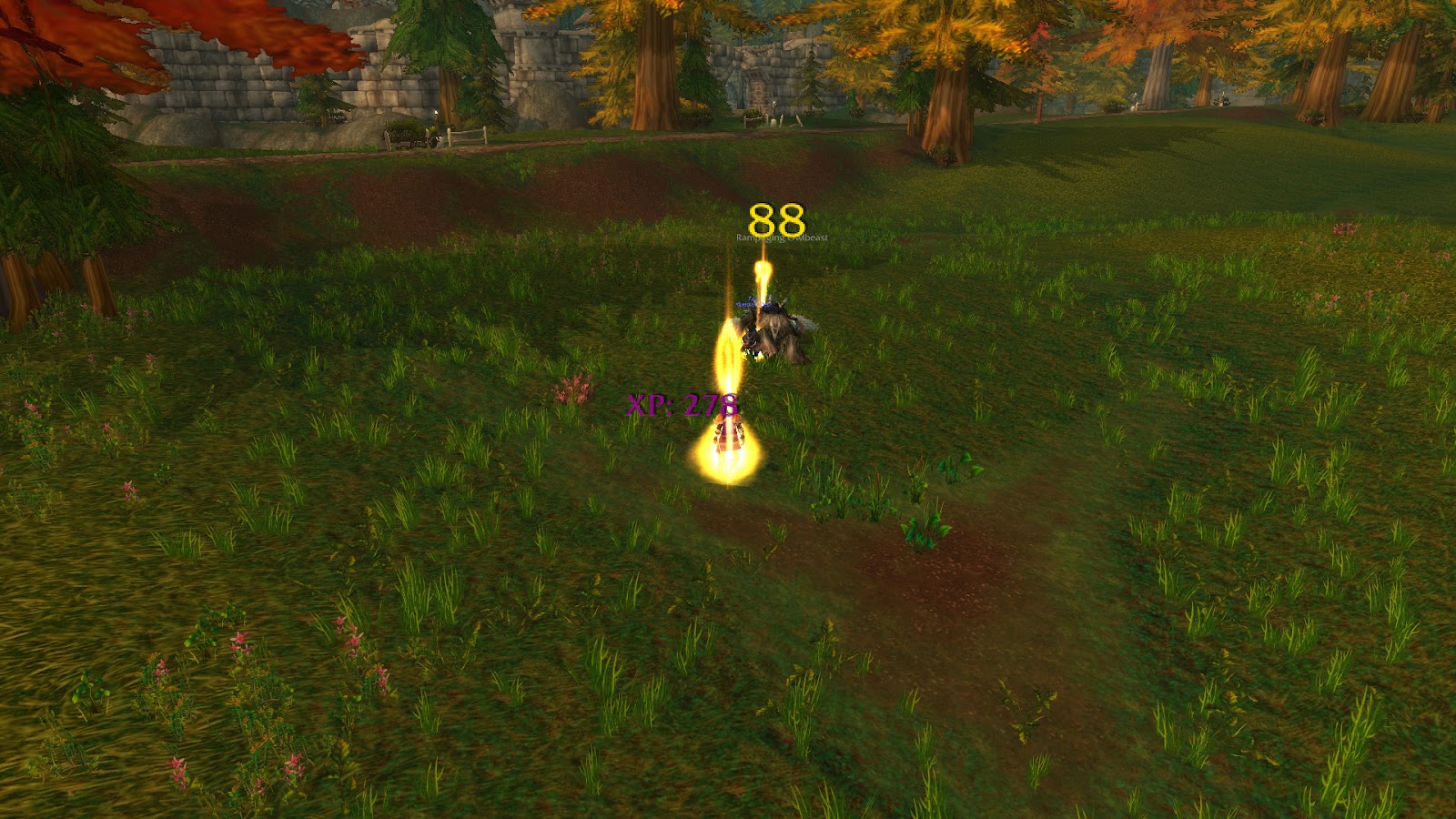 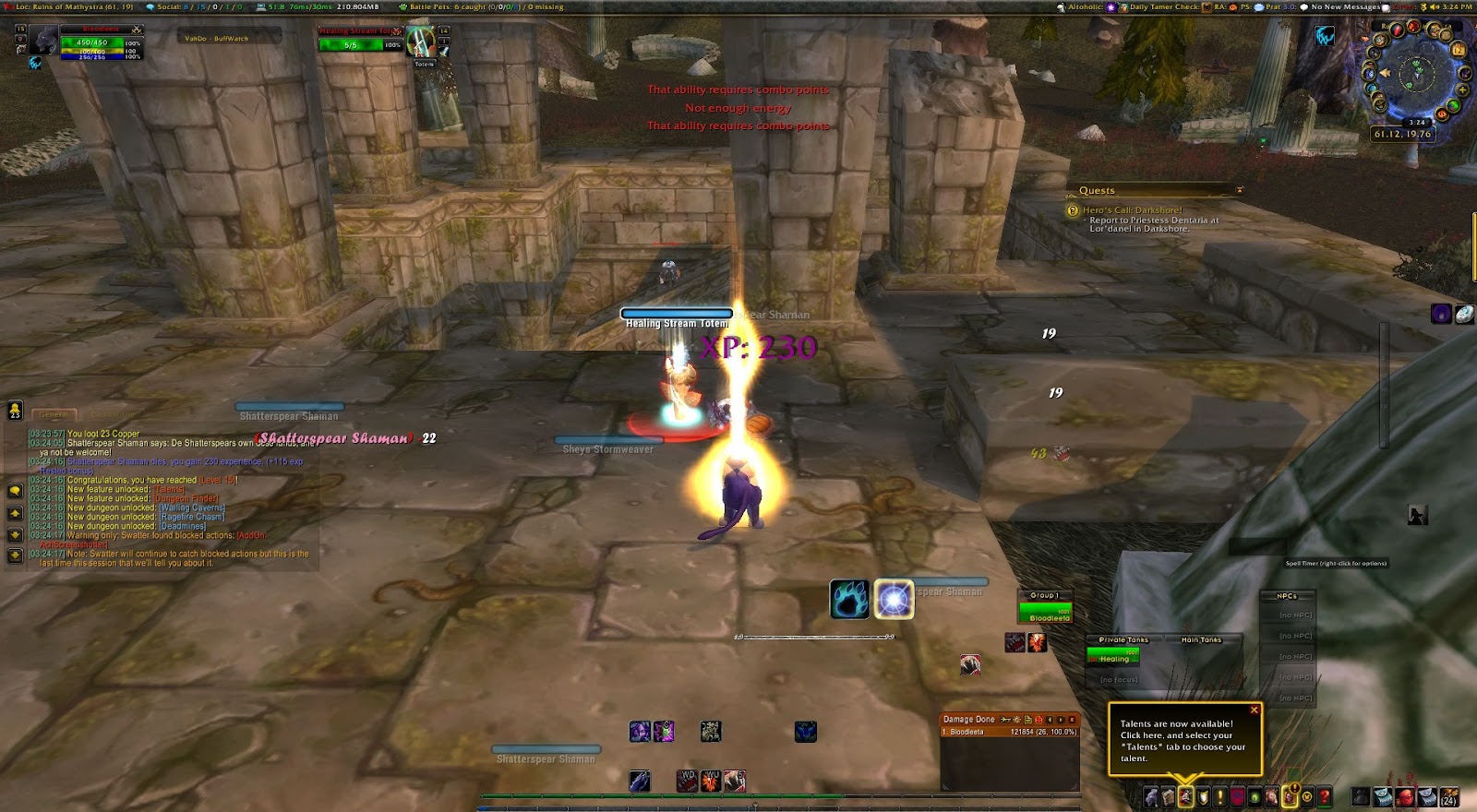 
4/ AIE Remembrance Event
Took part again this year - always an emotional yet amazingly warm and heartfelt event.
This has been my 4th year taking part. 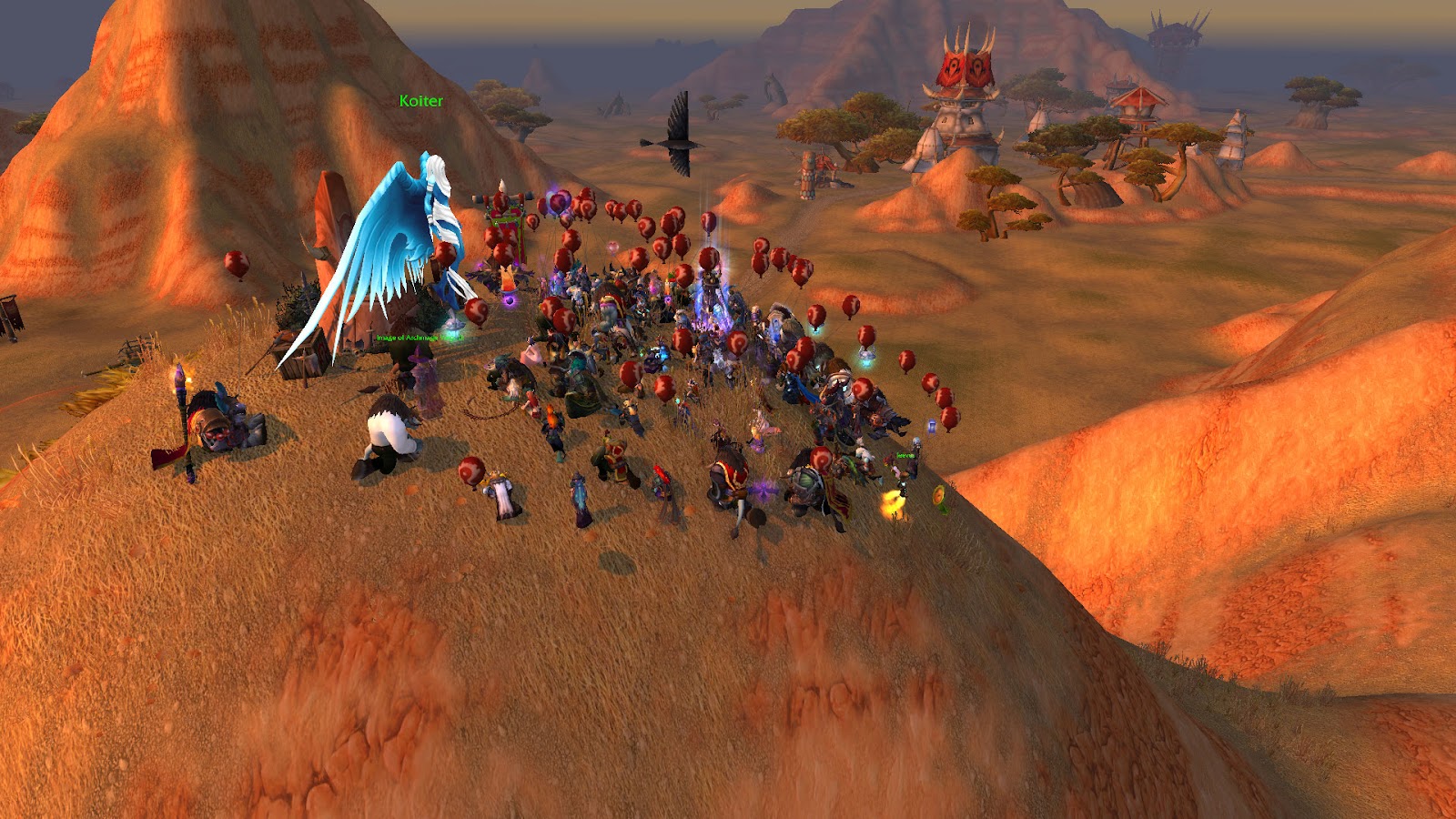 Paying my respects at Shrine of the Fallen Warrior 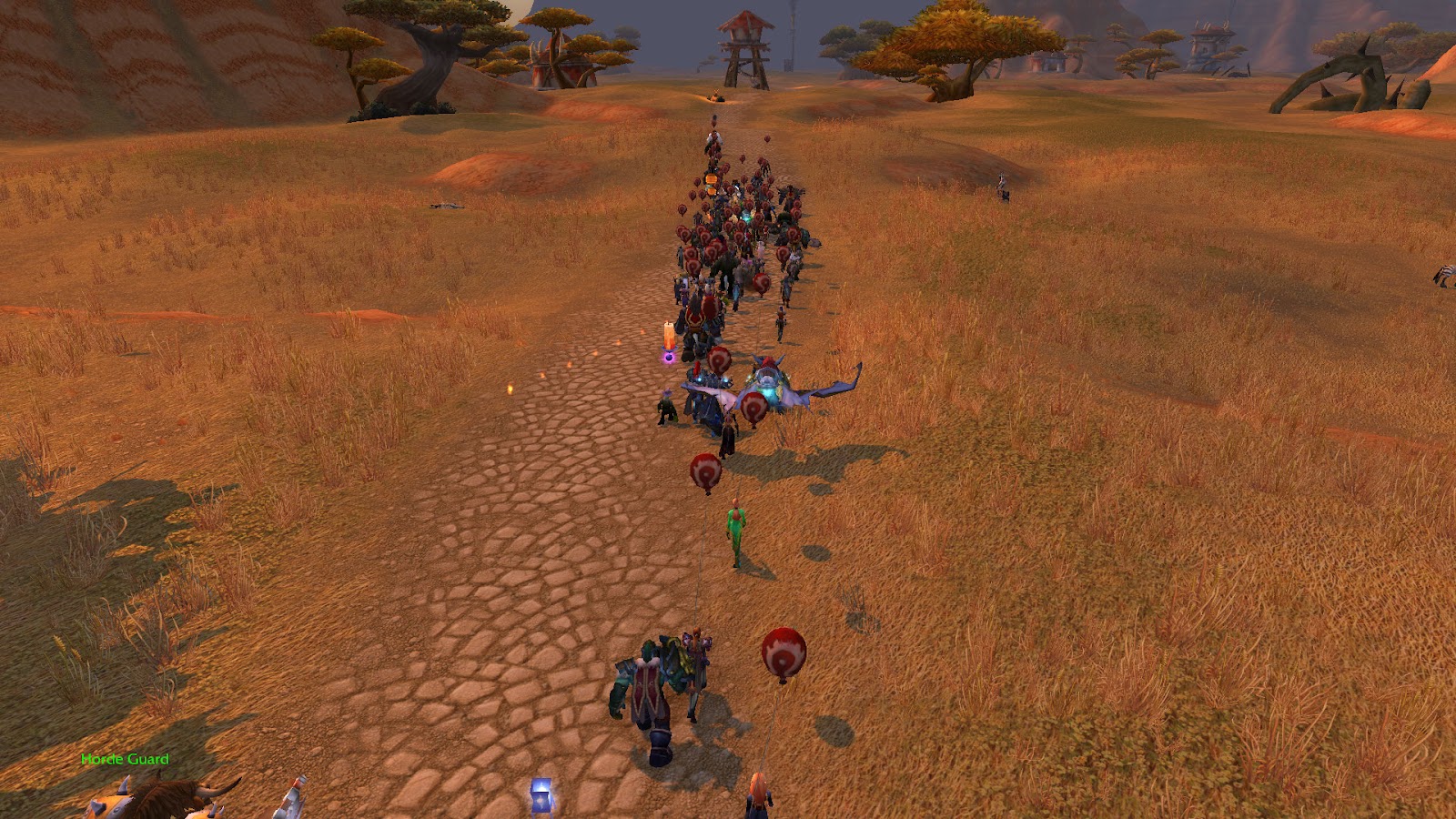 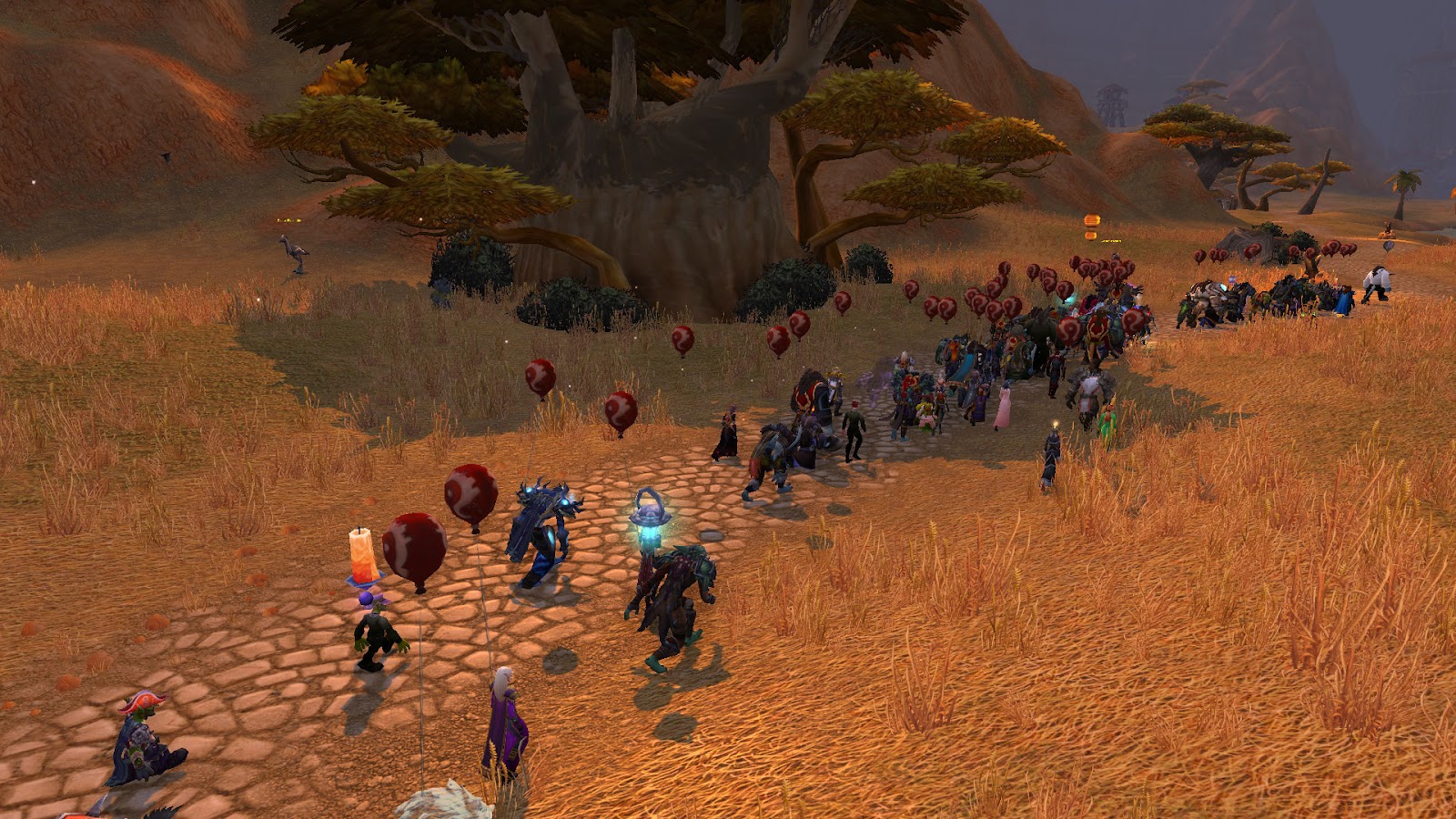 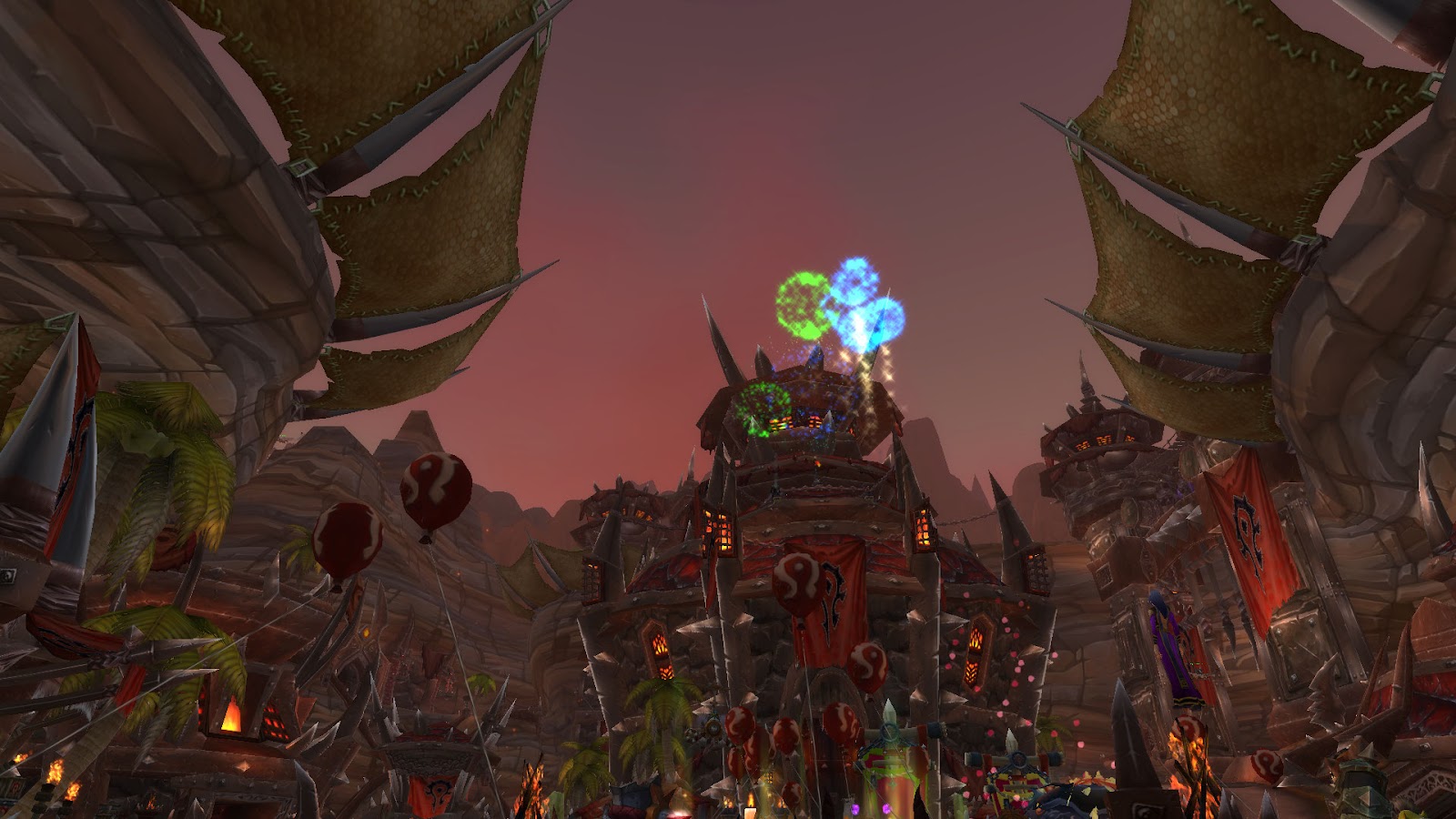 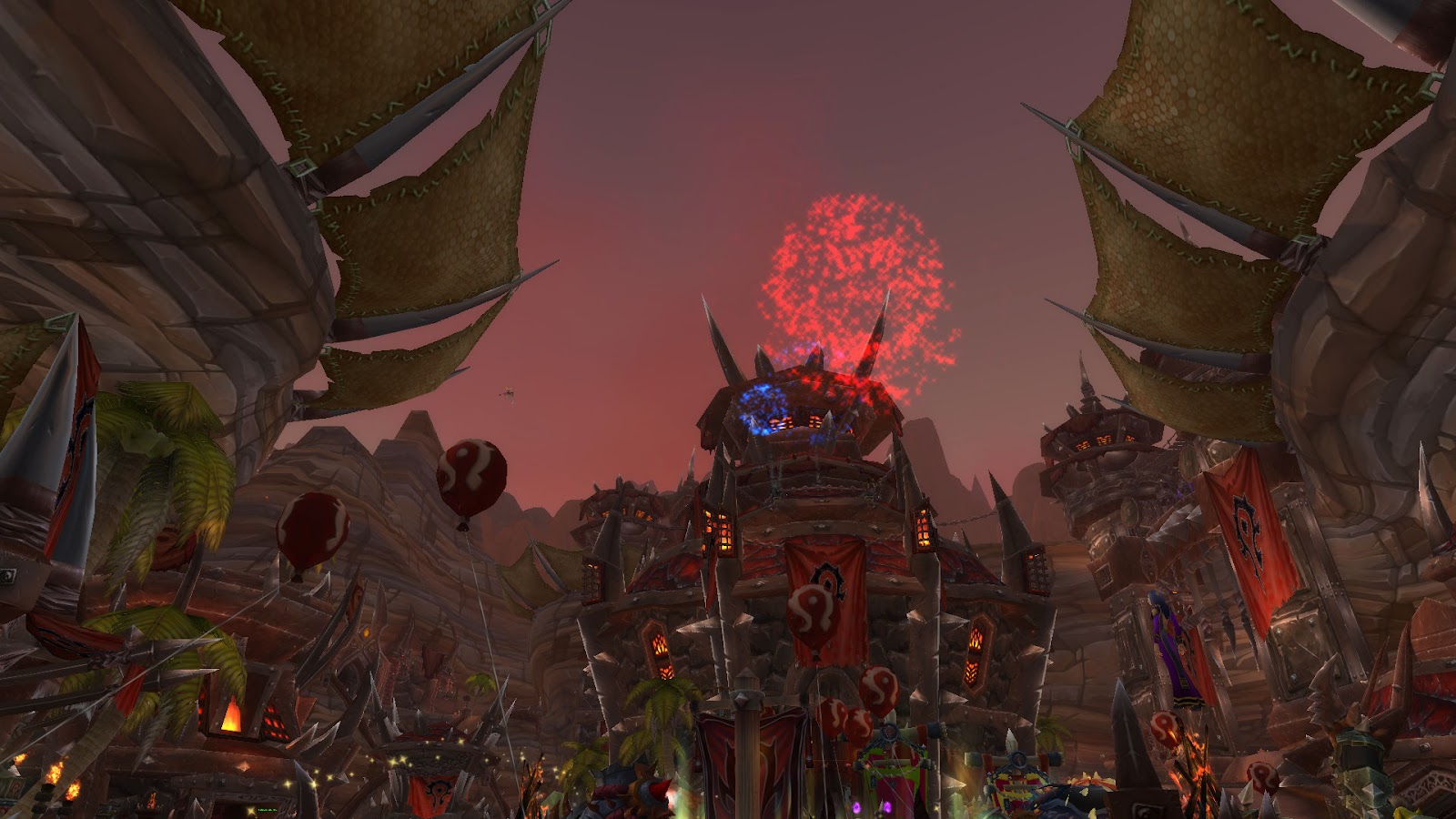 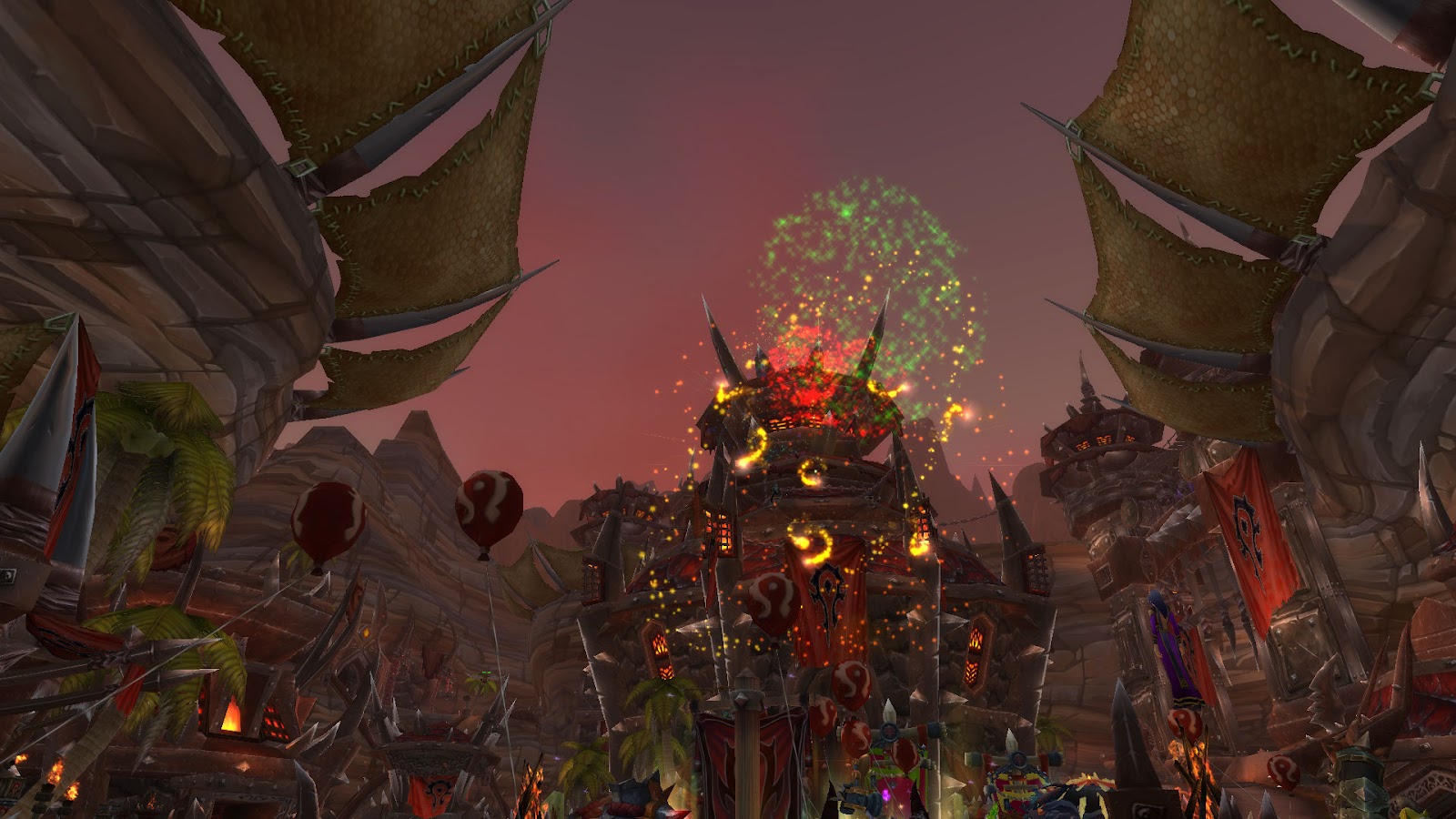 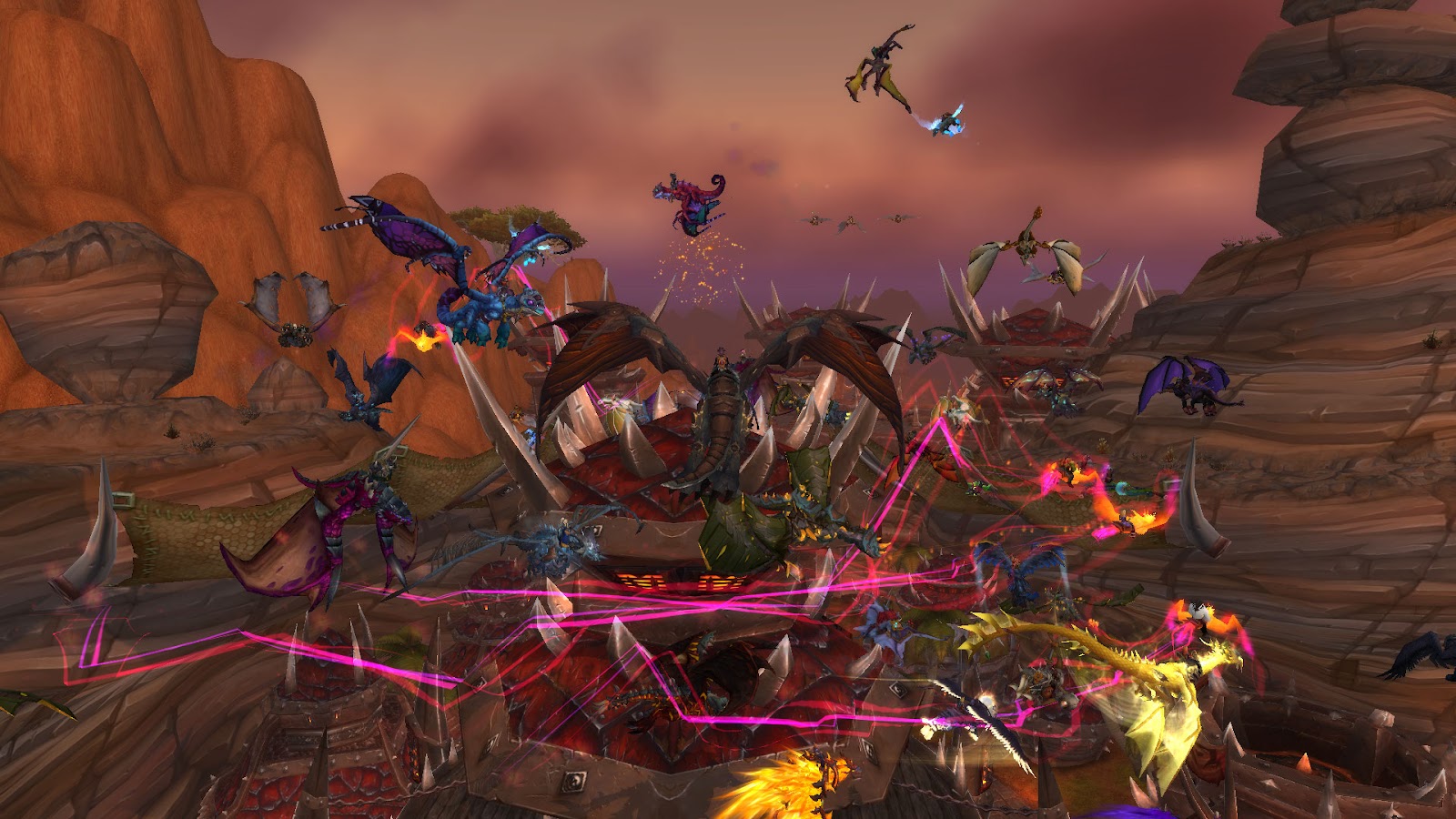 
5/ Timewalking Dungeon Weekend
http://www.wowhead.com/event=559/timewalking-dungeon-event
Ran Black Morass, The Slave Pens, Mana-Tombs and Arcatraz last night.
Managed to get no gear that was an upgrade.


6/ Timeless Isle
*shakes fist madly* Damn you Spineclaws!!!
Spent 2 hours grinding through Ancient Spineclaws… not even once did I get a Monstrous Spineclaw to spawn :(


7/ It’s Raining Mounts!
So I finally managed to get my 6500 Blackfang Claws! 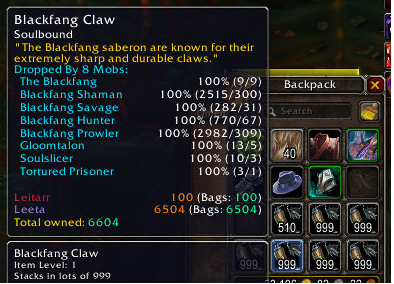 
Which meant I could go buy... 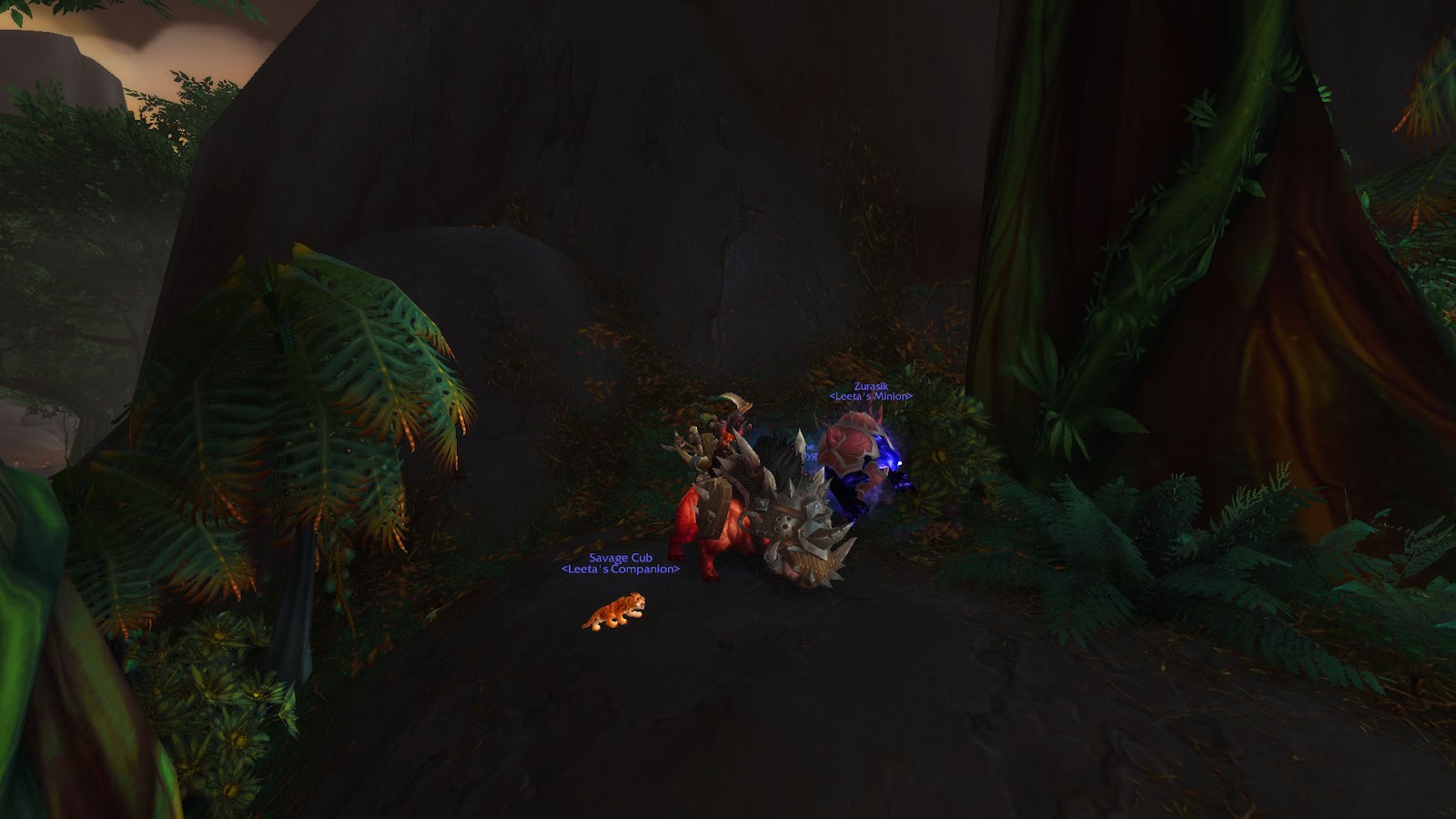 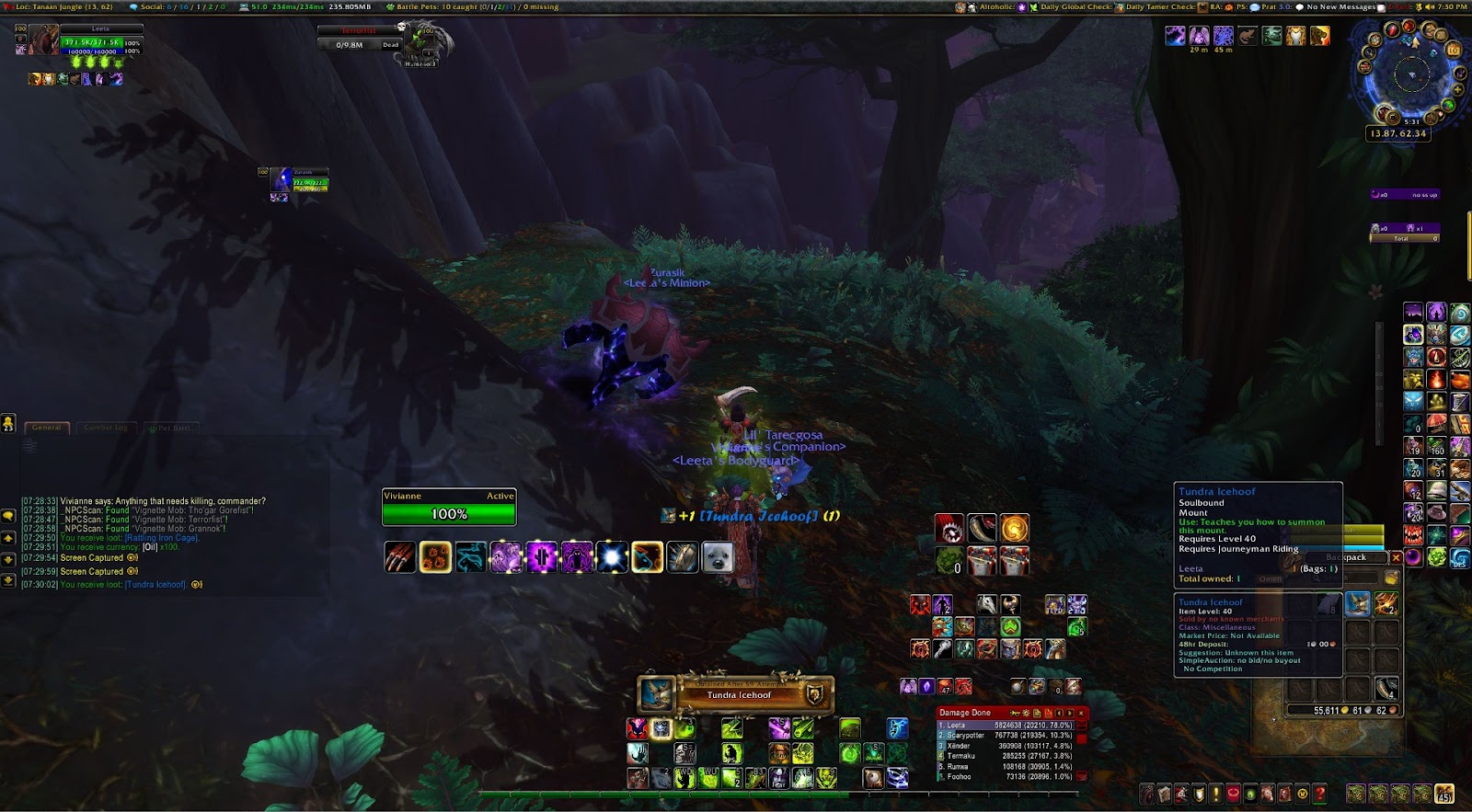 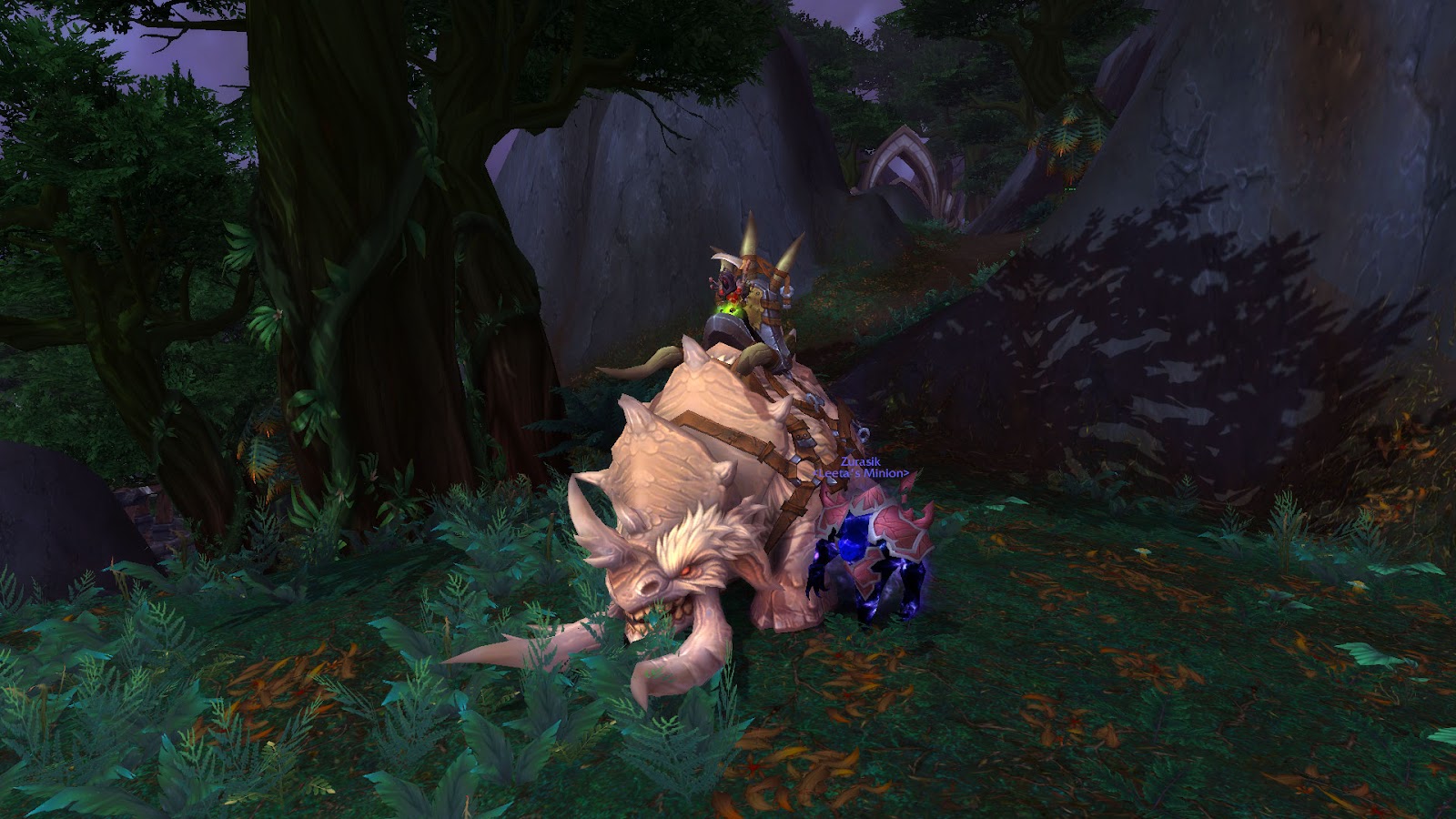 
But wait… there’s more!!
The weekly run for mounts - Ashayo, Wingy and I have been doing what seems like a long time!
Plus lost count of the amount of times I have been into Ulduar over the past 6 years! 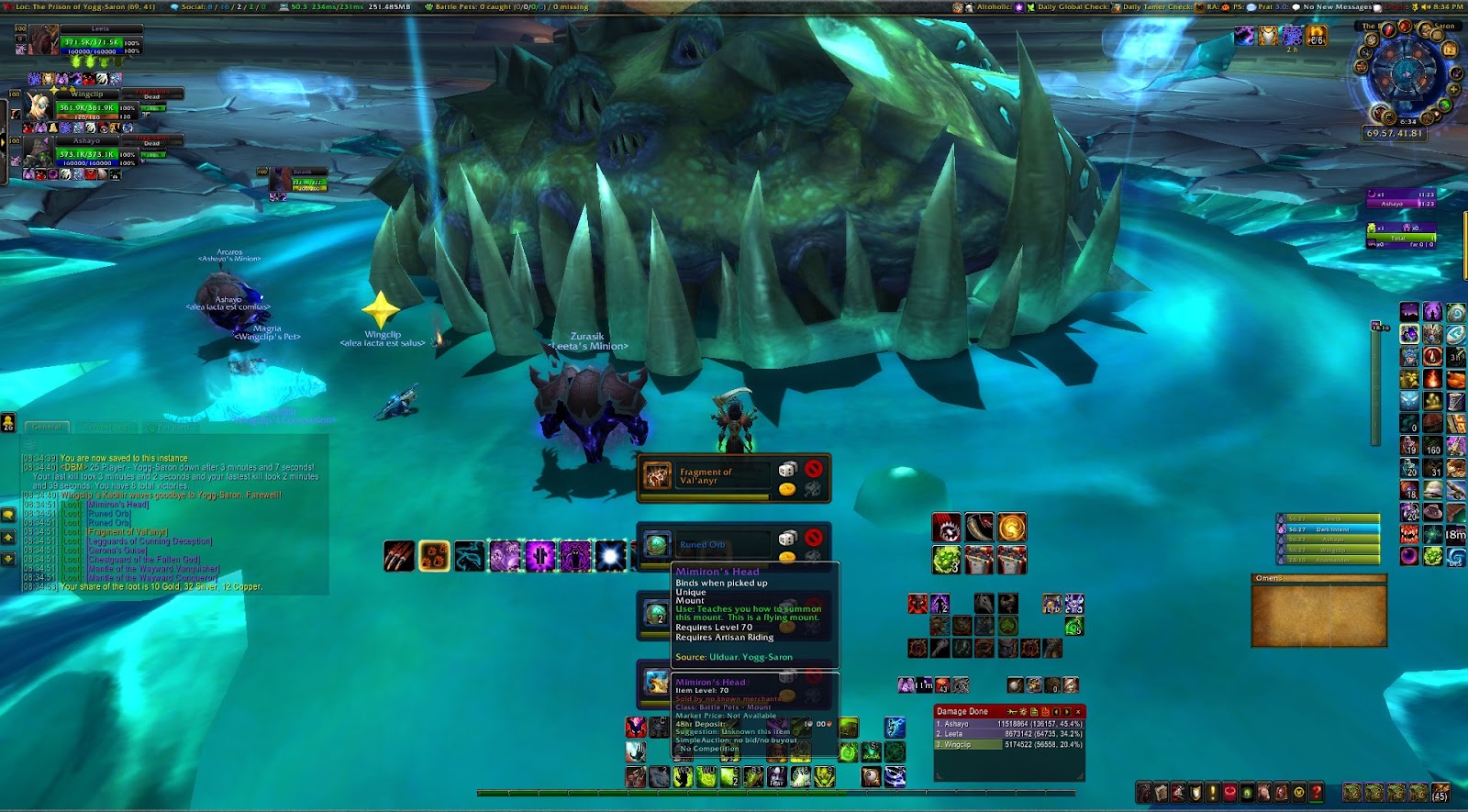 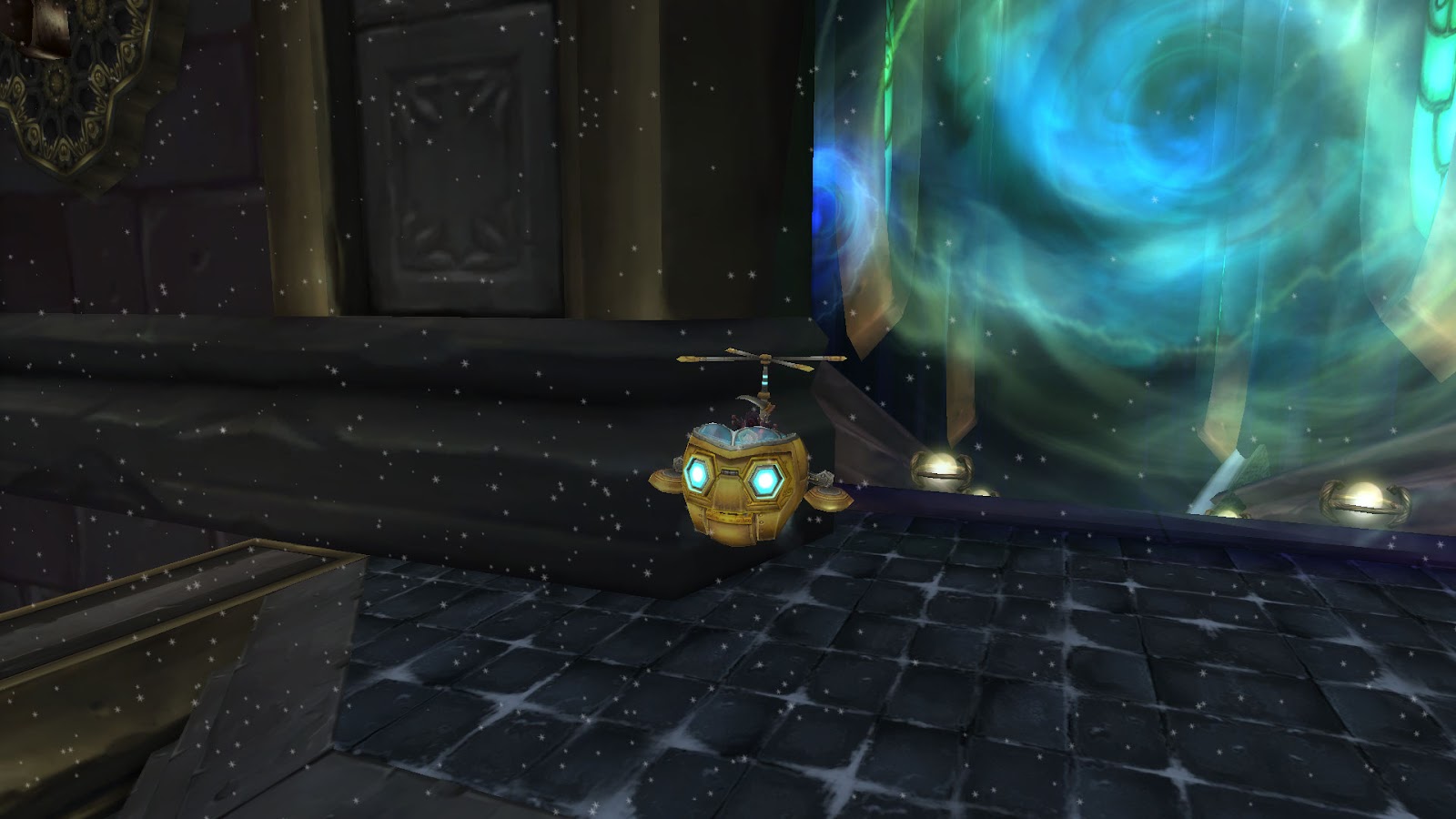 
**Happy 3rd Anniversary to Realm Maintenance**
I join Rho in this coming weeks Realm Maintenance Ep 157 - where he gets to turn the tables and interviews me!
**Girls Gone WoW**
I will be a guest on GGW Show this week - talking about things we would like to see added into WoW.
**The WoW Challenges Podcast**
This is THE podcast for keeping the WoW community up to date with the latest news and information regarding all challenges found on the WoWChallenges.com website.
We talk about all things WoW Challenges: Iron Man, Blood Thirsty and Pacifist.


Shows will be monthly.
First show LIVE - 29th August 7pm  EST
http://connectcast.tv/Stone
And we have a Special Guest joining us - Rogueslayer!
http://wowchallenges.com 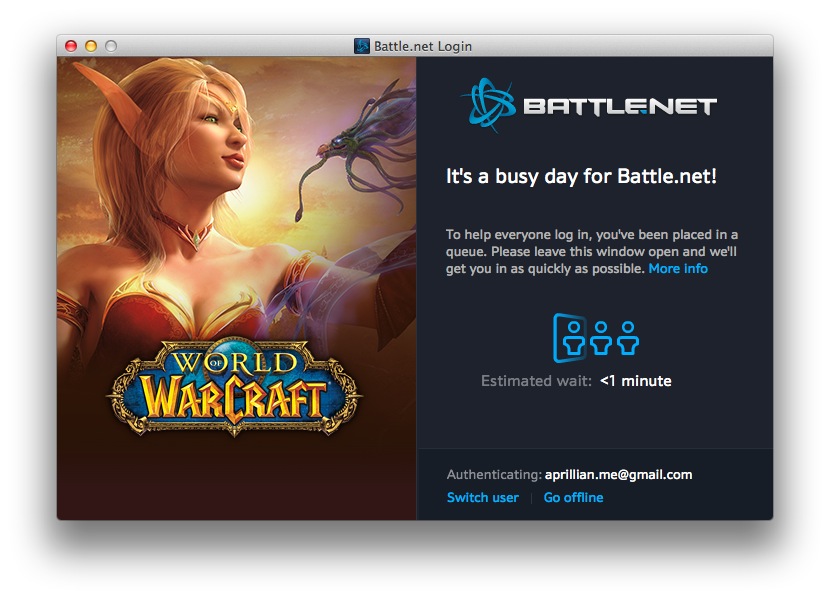 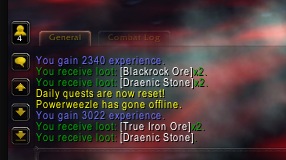 Curse you, Leeta/Blizzard!
Hail and well met!
It’s been some time since my last missive.  And as Leeta reminded me not too long ago, I’m likely over-due for another one.  So, from my small corner of Azeroth, let me give you the high points.
I, like many, seem to have mostly been drawn into the daily life of our Garrisons.  I’ve collected well over the 25 followers that my staff seems able to deal with going out on missions.  It seems like such a waste, having so many put on inactive duty.  We can only hope as the Legion draws near, we’ll be able to call up more of those followers to active duty.  And no, Aprillian, recruiting followers from your Inn is –NOT- cheating.  We’ll need those skills they possess later on down the road.  I’m still working on honing my craft on dealing with the naval crews.  I dislike losing ships, so I’m relatively conservative when I send them out.
I’ve been to Tannan, but not likely explored it as extensively as Leeta.  The Garrison has kept me busy, you know..paperwork and all that.  Orders to give workers, missions to send followers on, and now ships to set sail!  Since I’ve had to be close at hand, I’ve taken up Pet Battling as Leeta has suggested.  I thought I’d been doing fair at it, though not obsessing over it.  I had a nice little stable of pets leveled up to 25, just making the 75th one the other day.  And then Blizzard has seen fit to give us a weekend of Pet Battling that gives pets an extra 200% experience!  I now have right at 100 level 25 pets, although I have several that aren’t blue…yet.
Then, this morning, the weekend fully passed, the event fully over, I went back to doing a little battling.  Ugh.  … I was deflated.  Where I had once been excited to see quick leveling, extra experience in the range of 1200 XP per battle on the low side, now there was 600 XP..on the high side.  Oh the slough of Pet Battling, I didn’t know how bad it was.  Curse you, Blizzard!  Curse you, Leeta!
*sigh*  Well, I’ll get through, I’ll manage, I’ll figure it out.  I’ll be more casual about it for a while…until the next bonus weekend arrives.  Watch out, you 20-something ranked, Earthen Ring pet battlers…you know who you are.  I’m ranked 250 now, so that’ll soon be me closing in behind you! ;-)
There has been some limited LFR raiding going on, and I’ve gotten a few upgrades, which have been nice.  And, thanks to the help of our fine (pet battling) friend, Ashayo, I’ve gotten one of the 2-handed axes fully upgraded to over iLevel 700.  I’m pleased with it, and must scheme to work on my other gear as well, bit by bit.  In addition, I’ve been doing occasional LFG runs, picking up coins for the Heirloom Vendor in Undercity.  I’m trading them in for armor upgrades.  So, if you’re looking for an inexpensive way to upgrade some Heirloom Armor, you might look to that.  It’s a quest you get from the vendor.
Perhaps this missive has not been as brief as I thought perhaps it would be.  But, for the most part, that has covered my comings and goings of late.
I hope that all are well and in good health, but for now, I will sign off.
“Be wel…”
Wolfbrother / Eranth / Wolfheal
AIE & Clan of Darkness on Earthen Ring


Attached is my audio for this week. It's been a busy week but hopefully by the time the show records, i'll have both my bloodthirsty and ironman up to level 10 and registered on WowChallenges.com Below is images of both Vuzella my Bloodthirsty. Wondavyre isn't lvl 10 yet :( 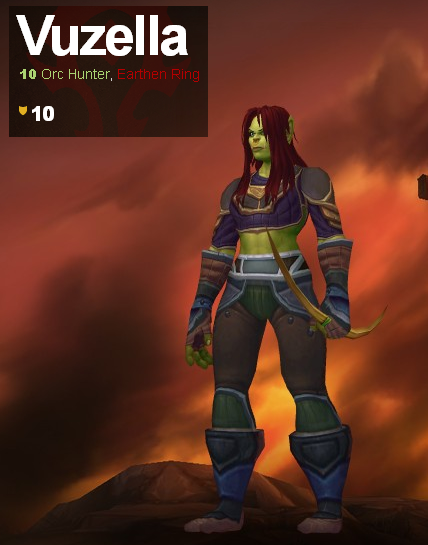 For the Horde,
For the Alliance,
For Juuno who had her birthday this week!


Kristen's audio
Hi CaW crew!
I’m sorry I haven’t sent in an audio in awhile, but I’m back now!
Lots of hugs,
Kristen

Thanks Marzana and Vrishna for the UStream Producer contribution, it's awesome!