Three quarter of the way through season 2 of the Deep Space 9 series.


Pushing 2 characters through the 20 world quests for the 1000 War resources alliance side.
Leveling Archeology to 600 yet again.

Sorry its been so long heres a audio
Big G


Included are my weekly email and today's blast from the past.  Enjoy!


Greetings to Captain Aprillian, her officers, and crew of The Caw,


When last I wrote, I was concerned regarding the offer made to me to
betray the confidence of the
Dark Lady.  I did indeed contact my good friend Yllie, to whom I made
reference previously. She insists
she pronounces the Y in her name in a refined manner, sounding as an E.
I believe it makes her sound
like a milkmaid, for a more common name than Ellie cannot be found. But
I digress from my story. She
did write to me once she had established her presence here in Zandalar,
to tell me her tale.


She received a message to report to the Dark Lady in Ogrimmar, and was
sent on a mission with a
trusted member of the Dark Rangers, Lyana. The details of the mission
must remain confidential, but suffice
it to say that she was indeed approached with an offer to meet further
with certain parties that were of
much concern to the Dark Lady. Upon the meeting, actions were taken that
would most certainly put
my friend into a very bad light with the Dark Lady, should the details
become known. Yllie has
concerns that her report, made directly to the Dark Lady, may not have
been fully believed. She will
continue to search out more information regarding the possible
insurrection, and report back to me
as new developments arise.


Sometime before the Winter Solstice, I received correspondence via a
twittering bird from an old friend
of mine and yours. This friend, Leeta, made refernce to a certain
society dedicated to seeking out
secrets, and some of the recent and past discoveries. After extensive
searching, I was able to solve some
of the riddles, and for my efforts was rewarded with a new belt, and a
lovely little pet. I have included with
my letter an artistic rendering of an acquaintance wearing the belt.


Information from this same society sent me back to the Broken Shore, to
a most surly warlock name
Drak'thul. He appeared to be sorely afflicted with a sickness of the
mind, constantly whining about
hearing whispers. After much searching, and crawling around caves, the
information led me to an arduous battle, from which I emerged
victorious. My reward was a most amusing mount in the form of a gigantic
jellyfi...what was that? I couldn't quite hear you?


I close out my letter with salutations and wishes for continuing good
health, and assurances of my
continued loyalty to the Horde and the Dark Lady. 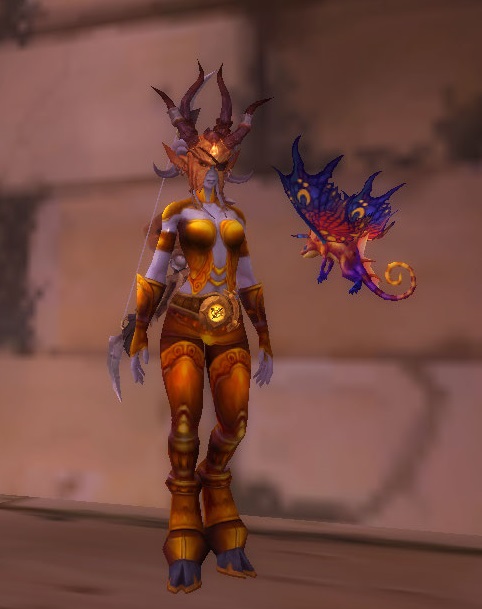