Hello Darlings!  Omgosh, Aprillian...this is episode 275!!!  Woohoo!  Only 15 to go to make 300!  Holy cats!  hehehee....anyway, I hope everyone's doing great & here's our little audio and a couple pictures of Pixie with her awesome dancing bear mount!

P.S. Here are some linky links! 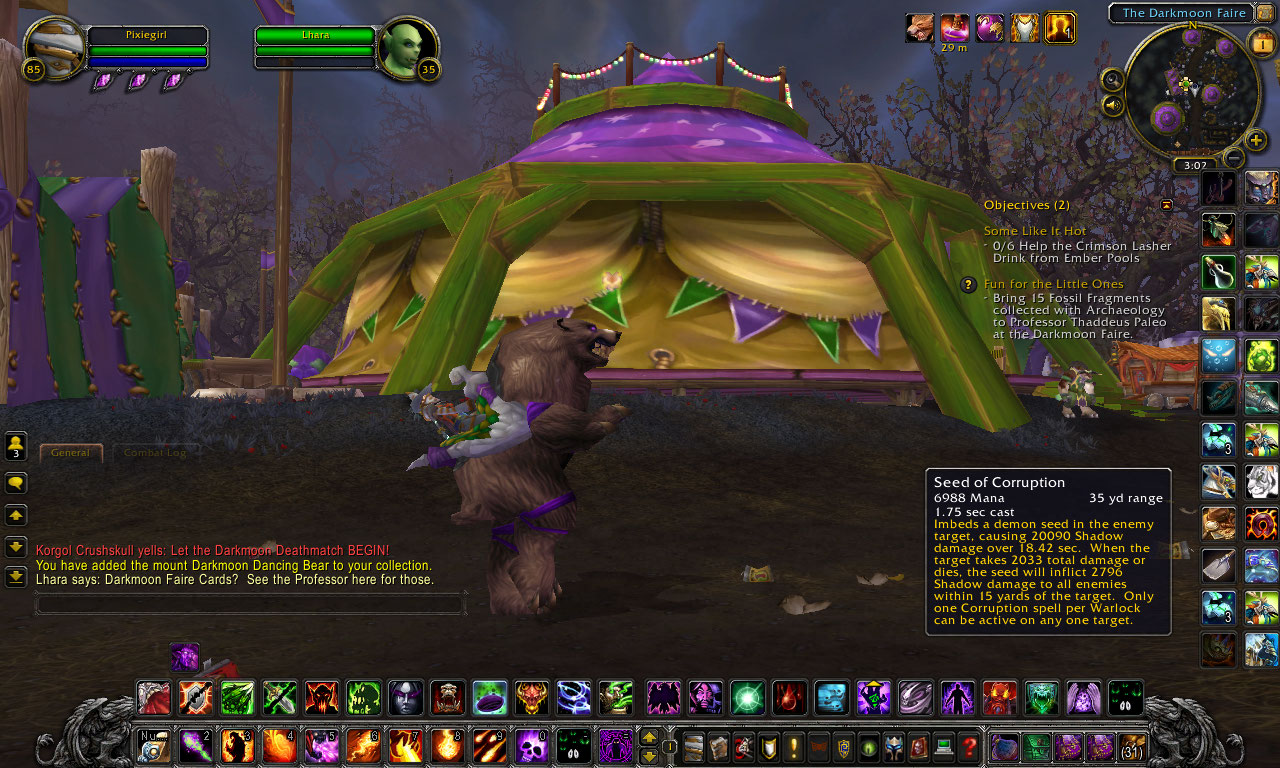 Hiide
- Leeta helped me tame Deth'tilac on Hiide. Had to kite him and get to low health before you can tame. Need a good name for him.
- Finally got the Drake of the West Wind from Tol Barad

Ironman
- Got to level 5 and decided I'd do something different and left the troll starting area and headed to the Tauren starting area. The quests out of bloodhoof village are very bland. Then I got to a point where I had no quests and no obvious place to go. Went off to Thunderbluff - no quests there either.
- Headed to Brill and only got a few quests there as well, before they sent me off to Silverpine. Instead, hit level 10 and heading off to Silvermoon

After winning the roll for the pet give away you requested me to email you regarding how to claim the prize.

I've been away from WoW from sometime now however i never stopped listening to your podcast. I'm planning to make a reappearance in the game soon, possibly this weekend. The main reason I've been playing less is because I've taken up kayak fishing, it's a great sport that keeps me fit. With the winter months upon us here in South Australia though, sitting in front of my pc with a heater and a hot cup of chocolate seems far more inviting than the chilled, wet and foggy waters of my local river. The pet is a great incentive for me to come back.

I didn't get that much time to play this week, due to family gatherings, sporting events, looking after a very sick pregnant wife. But c'est la vie (pronounced say luv eee). Although, I did a lot when I was online.

Some of you may have seen, but that 3-4 month stint of WoW vacationing has finished and I have actually LOGGED into WoW. I know, shock horror!! Earthen Ring is trembling in fear again!!! <insert evil maniacle laugh here> And boy did I get stuck back into it. Since there isn't really anything for my hunter to do anymore, I decided to jump on my Druid that had only just become geared for heroics (around iLvl 329) and I tried to go ahead and dps one as a boomkin. There was something like a 20 minute queue time, so I said "stuff that" in not quite as nice terms, and went off to the auction house. I only had to spend about 1k gold getting a few pvp pieces and I had the 342 ilvl needed to venture into the Hour of Twilight heroics. Now I'm not one to waste gold if I don't need to, so I didn't equip the pvp gear, as having them in your bags will raise your ilvl enough for the purposes of LFD groups.
So I queued up again. Only 15 minutes this time. And being the impatient person I am, said "stuff that" in not quite as nice terms, and queue as a healer. Now it has been a LONG time since I have healed as a druid. I think it was when they made the change to being in caster form and not tree of life form all the time. So yeah, needless to say I was a little rusty. I was running out of mana fairly quickly and being the typical pug, they don't normally like waiting. So I was scrambling to heal and drink and heal and drink to get enough mana to survive the next pull. Luckily for me, on almost every boss I got an upgrade (and in some cases a significant upgrade). By the end of my 7th run as a healer, I not only Valor point capped out, but was also geared enough to hit up LFR! I queued up for LFR and lets just say I didn't have as good of an experience as when I was pugging LFD.
But all in all a pretty decent effort for about 4 hours gameplay.

I haven't let D3 fall by the wayside, I am still very much enjoying it. I have started a little project where I am going to start streaming my game play for at least an hour on Saturday mornings australian time, or Friday afternoon for my America friends. I will be sending out tweets before broadcasting so if you are interested in seeing how difficult inferno is, then follow me @tinokk85 on twitter. I'll also be talking to the chat room and hopefully have a good time by all accounts.

To give you an idea of what you'll be seeing, I had been trying to progress through ACT 3 inferno on my barbarian and I ALMOST killed the first boss. I had to stop that cause I was kind of running out of money from repair bills. So I've been heading back into ACT 2 to farm some items, to get more gold, so I can die more in ACT 3, so I can repair, so I can go back to ACT2 to farm some items.

Sounds like fun eh? Then come along and join me. I'll probably be aiming for somewhere between 9am-11am AEST (australian eastern standard time).

This is Tinokk signing out.


Hey caw crew , Mr. and Mrs. Necrobob are sending in their second attempt at an audio submission. Its still very difficult as garage band remains a mystery to both of us but we managed to stumble through another recording. Below are some screen shots to go with the audio.
Hope everyone is well both in and out of game.

Loremaster of the frozen north

Hope you're all having a great week! Big hugs all round.

Here's my audio for this week - got abit of hayfever at the moment so am very nasally - hope it sounds OK.

Have a great show and I will see you all in-game!


Not much to report this week both my time and Internet usage have been curved working old Southern Cross job so back to my vampire sleep pattern. Got my mummy to listern to some CAW the other day went fine till she learnt big g was me then she called me a bleeping idiot and bleep slapped me in the back of the head. Missing you all heaps and Esperance more nothing has changed up in the cross while I was away it just got more depressing. So that's about it for this week for the horde for the alliance for the sandgrophers and for self censoring.

Big G
P.s Can you guys ask when Letta will be sending me the sexy pics

P.P.s forgot what I was going to type seeya

Wren and Morgaine here, sending in a quick e-mail seeing as how neither of us had much time to play this week. However, we did manage to sit down for 2 hours and finish out our skyguard rep grind to get ourselves some nether ray mounts, yay more mounts.

Anyways, sorry no audio again. And sadly definitely wont have any next week as Morgaine is heading off to Chicago with her mum to do some serious scrapbooking.