Hello CAW Darlings!!  I hope you're all doing GREAT!!  Here's a little audio from Pixie and I... 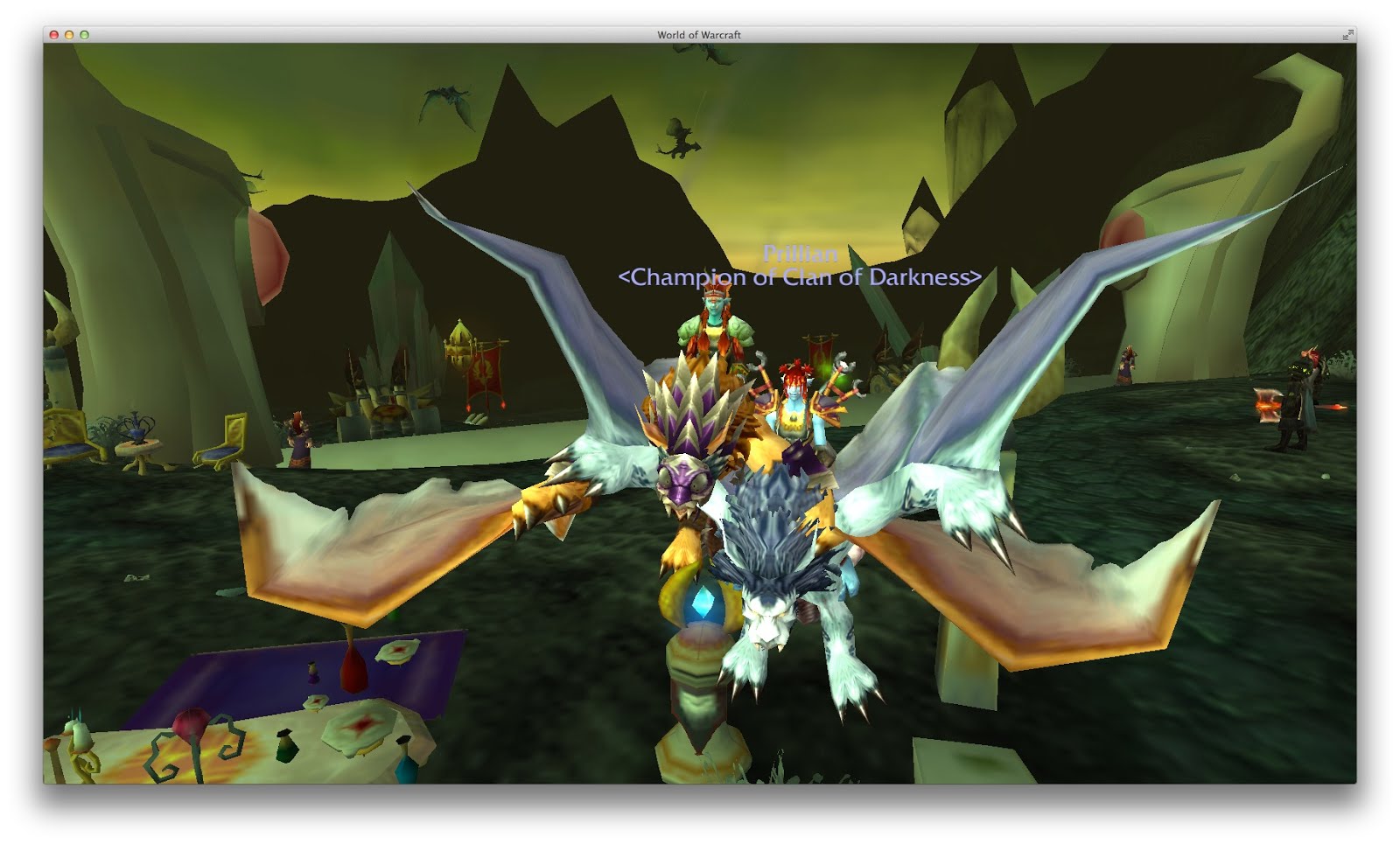 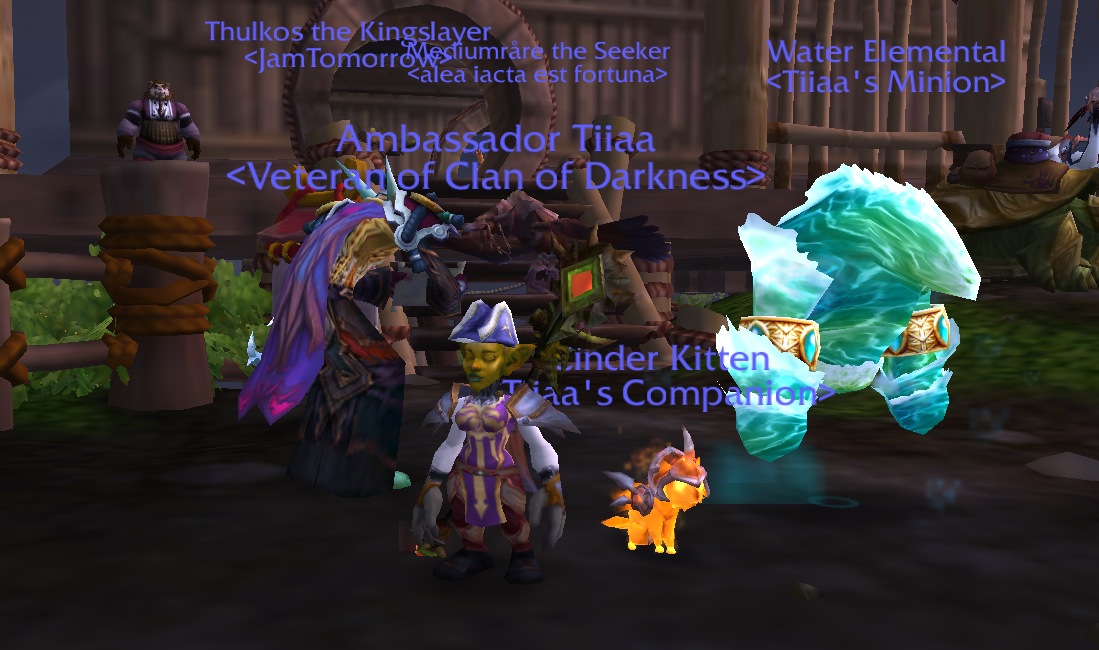 Shadowmoon valley
getting to nr
No inscriptionish

Jay
Dude NOOOO you dont want to buy the valor rewards from the
quartermasters and you do not have to grind rep with any faction -
save for the extra rolls on LFR loot.

Valor is to upgrade other items and if not that .. it doesnt take
anything to get into LFR or get into the 470 range from upgrading
heroic drops with jp and - if you look at the

Heroics -> LFR -> normal mode Raiding. - if you saved valor to raid
you would never get there.  I hope this isn't too convoluted.

Voltandra (audio)
Hello again to everyone at Ctrl-Alt-WoW!  The Feast of Winter Veil will be here this coming weekend, and Voltandra's checking her inventory and making her preparations.

As for other activities, we've found ourselves stymied by the Pandaren Battle Pet Trainers, particularly Hyuna of the Shrines. I've had to go back and work on training up pets of other classes. I had previously tailored my 25's to defeat the Master Tamer in Northrend, but those same pets won't do the job in Pandaria.  So it may take a while, but we shall be victorious!!

I hope you enjoy the attached audio. I'm taking some vacation at the end of the month, so perhaps I'll be able to wake up and join the chat room for a couple of sessions. If not, I'll just look forward to hearing the finished, fabulous podcast.

Have a great week, everyone!!

It's been a weird couple of weeks for me! My work schedule recently changed! I now work days instead of nights! Why am I telling you this I hear you ask? Well the reason I decided to play WoW on the US servers was because when I started working nights I found that that when I played on my home EU servers there was very few people online. Now I guess I will have the same problem on the US servers. As a result I have decided to shut down my US WoW account, at least for the time being. I doubt I will be quitting WoW altogether however, as I just recently started dual-boxing again and was having a blast doing so. I made a youtube video of me dual-boxing two hunters, I hope you will let me know what you think.

I wanted to comment on the mumble server that I purchased for the guild to use, so far I don't think anyone has used it! ;( The subscription is paid up till around the start of January I think but if people don't start using it by then I think I'm going to let it go. I will admit to being a little sad that people haven't taken to it but hey guess that's how it goes. If you are using it or are interested in it let me know by email or twitter and I will keep up the subscription otherwise I think that money could be better spent on a donation.

Not much else to say other than looking forward to the next podcast and I hope Jeppy feels better!

Its been a relaxing week in wow for the Nekrobobs, a little planting, a little fishing and a little Darkmoon Fair going. Along with that I've been amassing a ton of cooking ingredients for the auction house trying to get 180,000 gold for my sexy engineering flying mounts.
Yes I know its going to take a long time to gather that much gold, but I believe slow and steady will win the race. So in about 10 years I should have almost half the money to build those ridiculously expensive rockets.

I noticed, wile farming wildfowl breast that a lot of green gear was dropping, which explains why those stupid birds are so hard to kill, their gear score is higher than mine.

So along with a mass of food and ore I've also got a great pile of green gear to sell or to disenchant and sell, (which one should I do Jeppy, oh master of the auction house)

Since we've become exalted with the tillers our next target is Nat Pegle and the anglers. They seem to have a lot of fun silly stuff including ridable mosquitoes, a raft and a cool fishing chair. We'll keep you posted as to our progress.

Thats all for now fellow guildies

Big hugs and big thanks for your delightful podcast we truly appreciate all the effort and hard work you put into your amazing show.

Much love from the Nekrobobs,


Necronomicon, like all good farmers he's "out standing" in his field 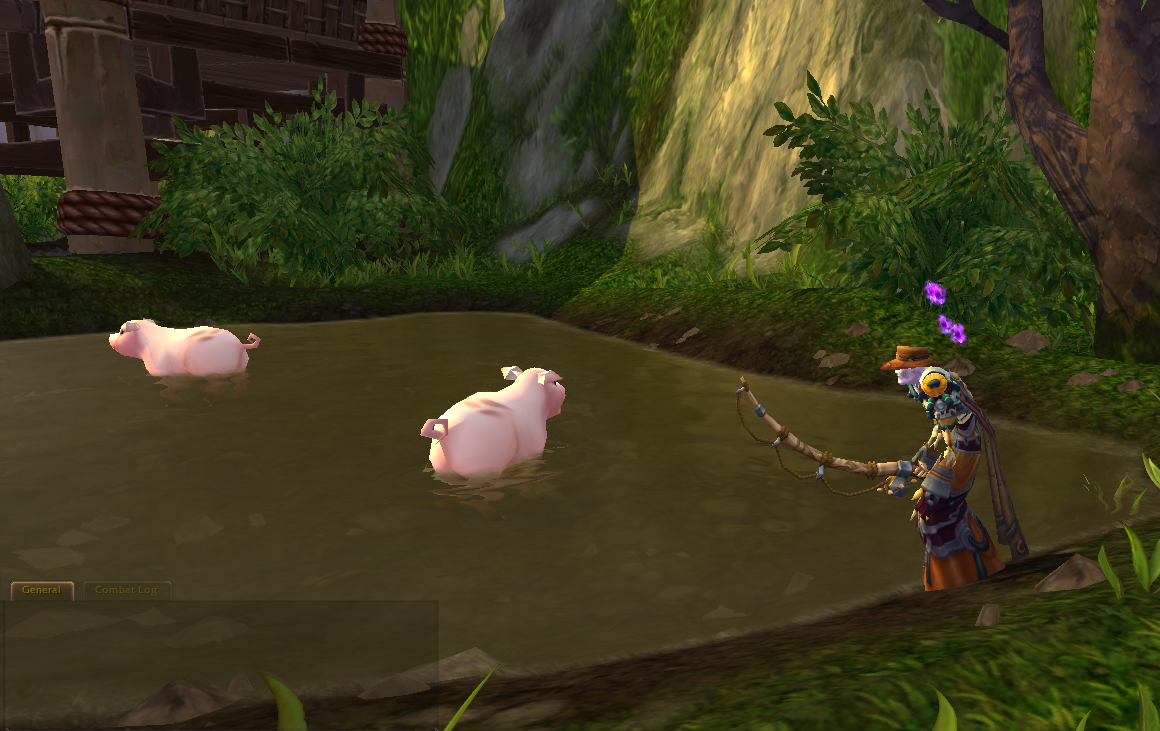 Leeta (audio)
Helloooo Sweeties,
Here's my audio, sorry it's short... that's what he... oh wait nevermind :P
Have a great show - miss you all and hope to catch up with all live soon!
Huggles Leeta

Big G
Sorry have been caught away from home this week so no audio this week had some time with my panda this week almost out of the starting area around lvl 11 at the moment. So I went to Perth got the all clear so that was awesome but now I am up for a new set of car tyres so into every life a lil rain must fall have a awesome show.