Aprillian, Ashayo, Tedrah and Kimmie discuss another week of playing World of Warcraft, Blizzard's great MMORPG. Contest Ongoing send an email to ctrlaltwow@gmail.com telling us how you play WoW, either as an altaholic or dealing with it in your family life to being placed in a drawing for a WoW Pet or an Authenticator.

We hope everyone's doing great in and out of game this week.

I just wanna know...who's going to Blizzcon?!?  I just booked a room!!  C'mon Aprillian!!!!  hehehee!  I'm not going to set my heart on getting an actual ticket to Blizzcon (that would be amazing though, and I am going to try!) but either way I'm gonna be there and hopefully get to hang out with some WoW peeps!  WOOT!!!!

p.s. Big hugs to the chat room and all the contributors, too...we love you too!

On Wed the Farmer Yoon’s Quest and Jogu’s  were both Jade Squash. 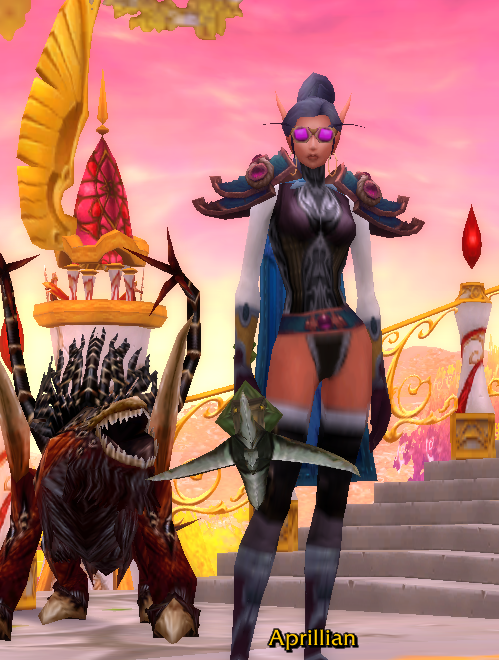 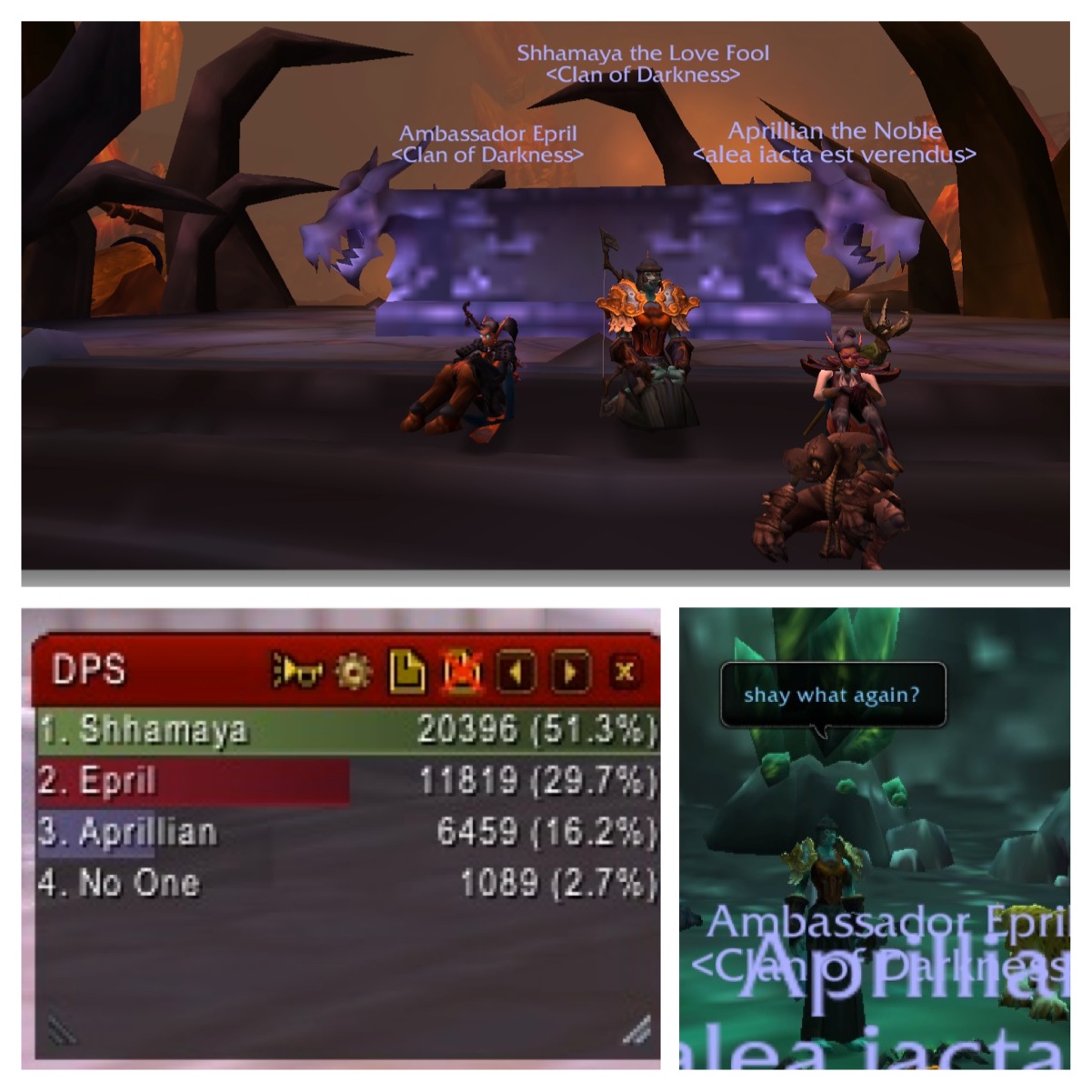 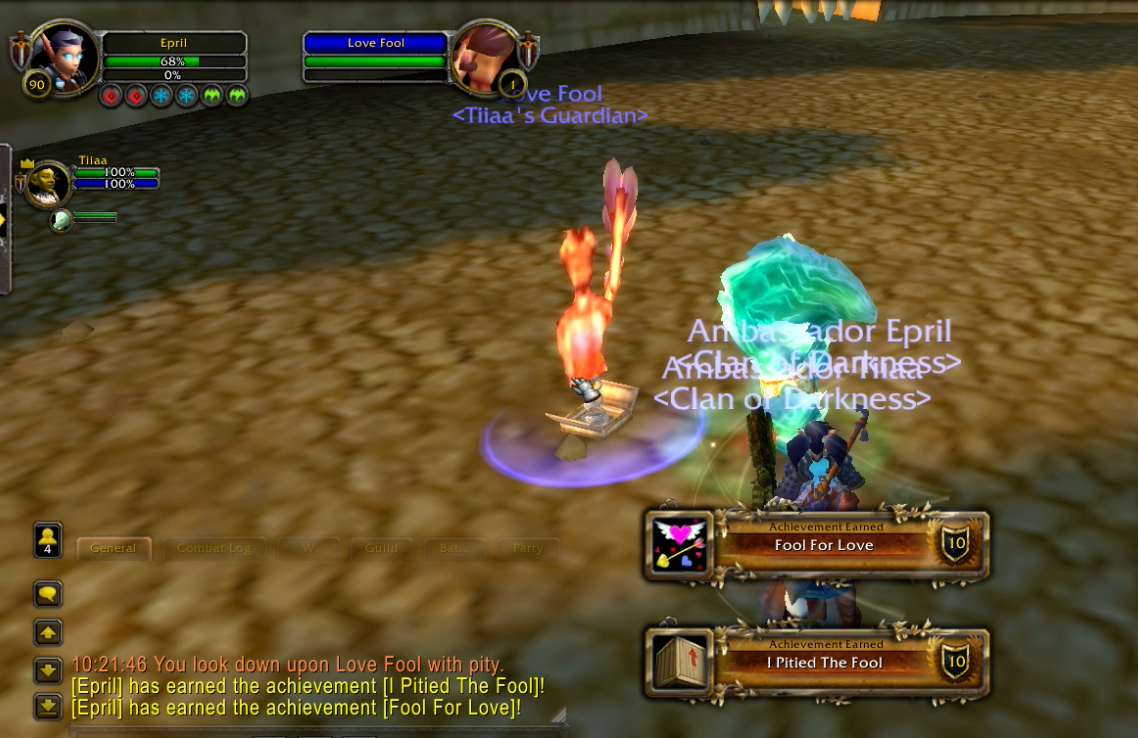 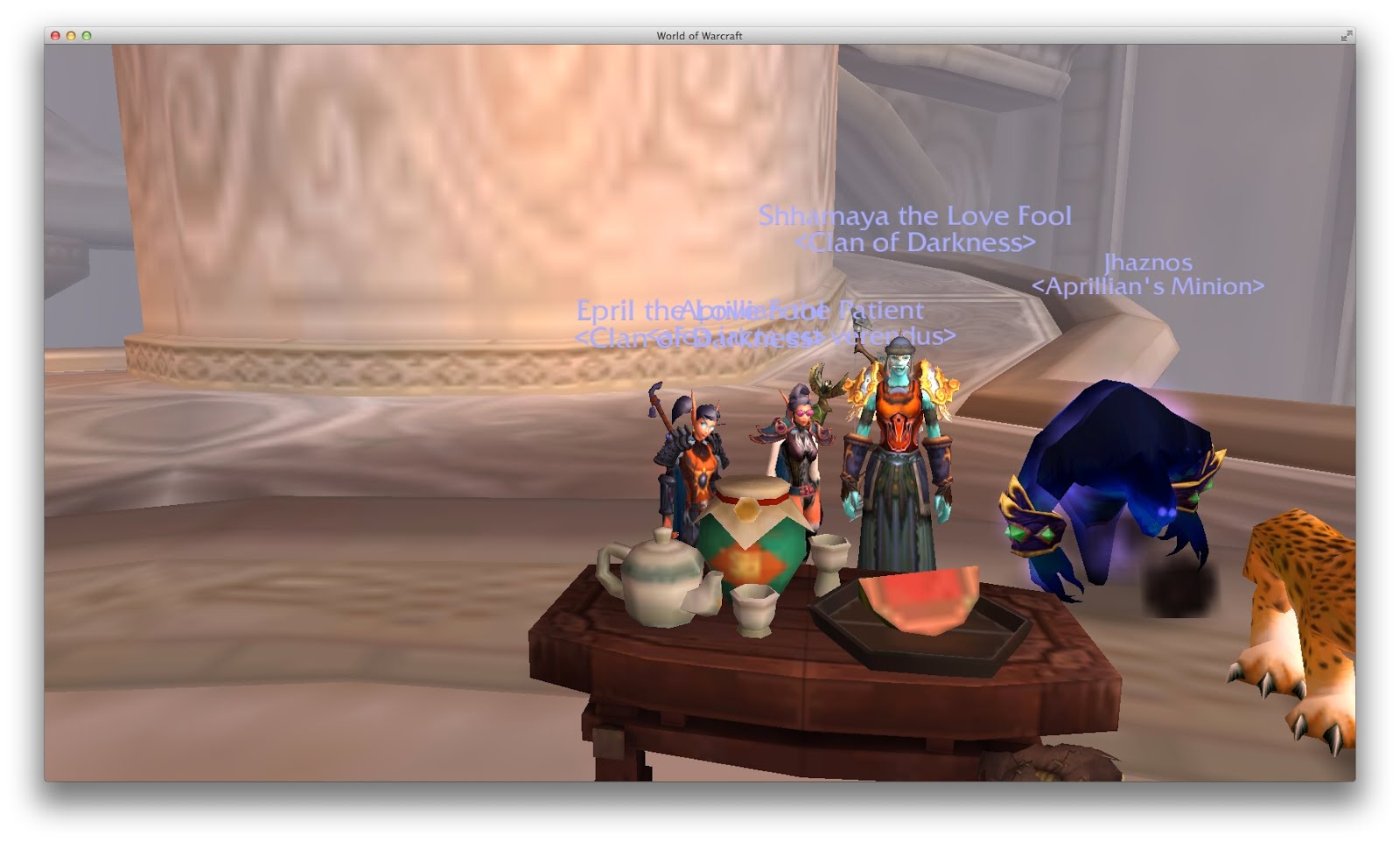 Grand Master Payne certainly lives up to his name ; Molly and Leeta both stuck on him. Got lucky and managed to take him down. Mechanical cub to take out his healing/stunning bear (supercharge & demolish to one-shot it), Frosty (wrath collectors edition) to take out his mechanical chicken, and an aquatic to take out his elemental.

Naxx, AQ40 for pets ; got Viscidus Globule - after a long kill. Took DK to twins … MUCH easier!

LFR - tier shoulders. bought the wrong ones. more spirit on dps ones than healing, and crit on healing, mastery on dps.

Been farming for Mr. Grubbs

Got Exalted with Tillers, but hadn’t done the Growing the Farm III: The Mossy Boulder and damn...that was long.  42 gave me a great hint that when I have an entangled plant, just blink and

I hope everyone is doing great, in and out of the game! I know it has been a while since you have heard from us, so please don't be too mad.... By the way, Jeppy, we both hope you are feeling better! We miss you, mi amigo!

We hope you like our submission, and everyone have a great week!

Dreams and Kithore, of Earthen Ring, CoD, and Dragonblight!

Thought I give you an update and maybe some complete sentences.

Got my Rogue up to 89.5 and I think I will stop there. Rogues are worthless. That's all I have to say about that.

Been doing a lot of dual boxing while running guild mates through ICC 5-mans for gear, so that we can get the Ulduar achievement (Herald of the Titans).

Got yet another toon to max level fishing and hope to have another Giant Sewer Rat soon.

I hope you are all having a blast!
Please say hello to the chat room.

FOR THE HOLY PALADINS

P.S. A Big 'Thank You' to Ashayo for turning down a chance to defeat Elegon. We missed you mate.


Necronomicon (Audio)
Greetings CaW crew, Aprillian, Ashayo and the, so happy he's up and about El Jeppy, and Tedra and this weeks special mystery guest.

Big hugs and helloes from your friends the Nekrobob's. Below please find some screen shots of my "no kill no quest" toons and this weeks audio submission.

and remember undead love is forever….

Bonk em on the head and take their stuff
or "Root and Run"….
Then sell all that junk at auction and reap the rewards 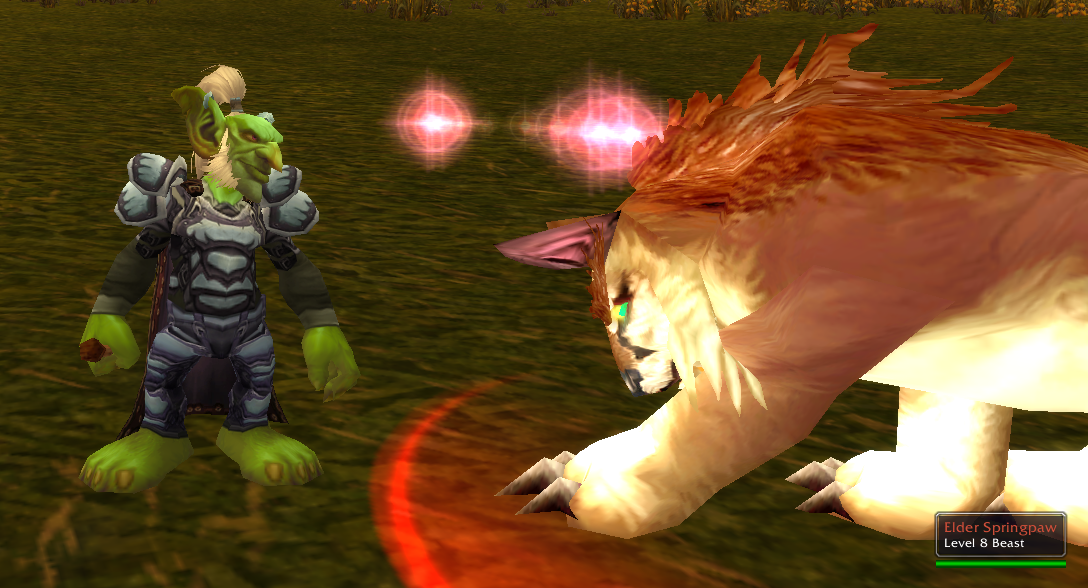 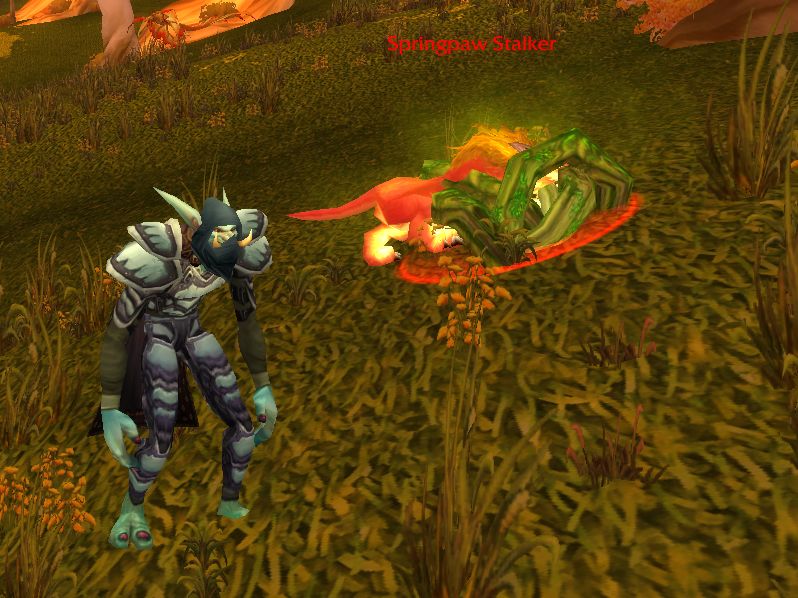 It’s been a fun time in and out of game for Mel and I. I think the most fun thing we did this week was with the "The House of the Undead " ie Mr Nekro since Mrs Nekro was not available . We were online and 42 had just hit 90 and Mel was at 89.9999, perhaps a bubble to go when we spotted in General Chat a call for a group to kill the Sha of Anger. We joined and they needed many more - we checked in Clan of Darkness and Mr Nekro was on. We whisper him and ask him to come along. He was worried about not being good enough and so on but we encouraged him and we all joined in. Shock and Horror!!!!! Alliance had actually tagged the Sha before us! There was much PVP flagging on our raid’s side, to try and “accidentally” become targeted by the Alliance AOE attacks, but they were wise to that trick. We had to stand by the side and watch them agonisingly slowly grind the Sha down. The raid spread out to every known Sha point – without Mel who could not yet fly and had to rely on the kindness of others for transportation. The Sha sulked for a few minutes but then was back up

It was On!!! Or was it – we were too spread out over the whole zone and anxiously waiting for the group to re- assemble before the Alliance got there in numbers

Finally after a lot of faff-ing around we eventually start and we wipe. Talk about anti-climactic Lol. The group reforms and after a few minutes the Sha tumbles to the earth dead. The three of us loot the body and get the quest for the boots. Poor Mel was still not 90 so she could not start the quest although she had looted the item.

42
PS Mel made it to 90 later that night, so now we can start doing dailies Yeeeeaaaaahhhh :-)


Hail JATA hope all are well and Jeppy is back soon. Been an up and
down couple of months with WoW for me.

I started a ten man team at the beginning of January <Heroes of
Canton>. We did great out of the gate but then lost some people and
have been rebuilding since.

I'm good at analyzing boss, researching and developing strats as well
as teaching the fights. What I stink at is recruiting and keeping all
the people organized. It's hard for me to concentrate when I've got
7-8 whisper conversations going on at once.

Originally I formed the team to raid with 4 other AIE folks I know but
they have all dropped out for various reasons.

So I'm spending 6 hours a week with some nice people that I didn't
know 6 weeks ago. We are building a good group and once the roster
firms up we'll be able to keep up with progression. Currently we are
4 of 6 bosses down in Mugo'Sha Vaults and 1 of 6 bosses down in Heart
of Fear. We hope to get the last two bosses down in MSV before 5.2.

For full week last month I was in San Francisco on business. The
hotel internet had terrible lag so all I could do was dailies. I was
waking up at 4AM each morning so I took that time to finish all the
Pandaria Rep grinds. The Kite mount you get as a reward is currently
my favorite mount.

With the rep grind done on my main I finally felt I had the time to
level an alt. I love playing my Blood DK, Dureau. He would have been
my main but I like having the option to heal so I chose the Pally.
Leveling went fast. With each Ding I skipped ahead to the highest
level quest available. At 89 I started the Kalaxi. I was revered and
50% to exalted when I hit 90. I think I only died twice from 85 to
90. Blood DK's do a ton of self healing and put out a good amount of
DPS.

The night I dinged I went over to the Dominance Offensive and blew
through the cave set of dailies in quest greens and blues. After a
few nights of grinding heroics I got his iLevel up high enough for
raid finder and tanked MSF. I am making sure to cap his valor each
week. When 5.2 hits and the valor cost drop for 5.0 and 5.1 gear his
iLevel will almost be as good as my Palidyn's.

I have enjoyed all the guest host but I'm ready to have Jeppy back.
When he tweeted that he was home on Saturday it made my day.

just a last minute mail, with some updates on my toons and all.

My new DK "tank to be" Marouk, is lvll 90 now, she has started equiping for LfR and i do much
look forward to doing ALL the dailys again, with NO commendations... NOT!!

RL i am way over my head with work and looking forward to 2 weeks holidays starting on the 11th .

Nothing much else from me, besides some greetings to CAW and all and to JEPPY of cause, get
better soon buddy:)


Sorry for the late ness but I been busy ok I sorry please don’t spam me bro.
Big G

Molly has a new blog! Check it out: www.zombinista.com

Donnie (Audio)
Hey Gang! This weeks audio! Clan of Darkness is THE GREATEST GUILD IN THE WORLD! You all are awesome!