Hi Aprillian, Leeta, Rogueslayer and Tedrah and all of our awesome guildies & friends!
Hope everyone is having a awesome week, in an out game!

Wow did we have fun last night (Friday night) and you'll hear more about that on our submission,
hopefully Juuno got it edited and sent in. But we wound up with a awesome group and in Rokwyn's own
words: Yoggy down... Grats to CoD who now has Glory of the Lich King Raider! Woot!! Yep Grats guys,
awesome job, we had a couple of new guild mates join us this time Wing, Golcan and Deathstdyer hope
they had fun and will be back for more.

If it hadn't been for Clogalis we wouldn't have gotten the ach., he had to leave and left his poor toon with us.
Thank you Clogalis I salute you for sacrificing your toon for the guild achievements :)

It was a little hard getting a big group together last night, so I thought about it and will start posting in game
again plus on facebook by Monday. This I feel was my fault for not getting the word out sooner and in more ways.
also I think on twitter like I use to do. By the time we got around to doing the main raids it was late, everyone was tired,
poor Grand Nagus had to work in a few hours. But still all in all it was fun and it worked out thanks again too all
of you! And we missed Donnie & Lisa last night, Donnie is sick so hope he gets to feeling better again soon. But
as we've said in the past if you would like to join us on these raid please just pop in and say invite :)

Okay that's it for me this week, haven't gotten the little dirty helper pet hope you have Leeta.

Hugs & Kisses
Pixie
For the horde & Clan of Darkness

Crafted Leggings of the Night Sky, ilevel 553 for Aprillian, 28 days of cooldowns, bam gone. Aprillian’s ilevel went from 481 to 485 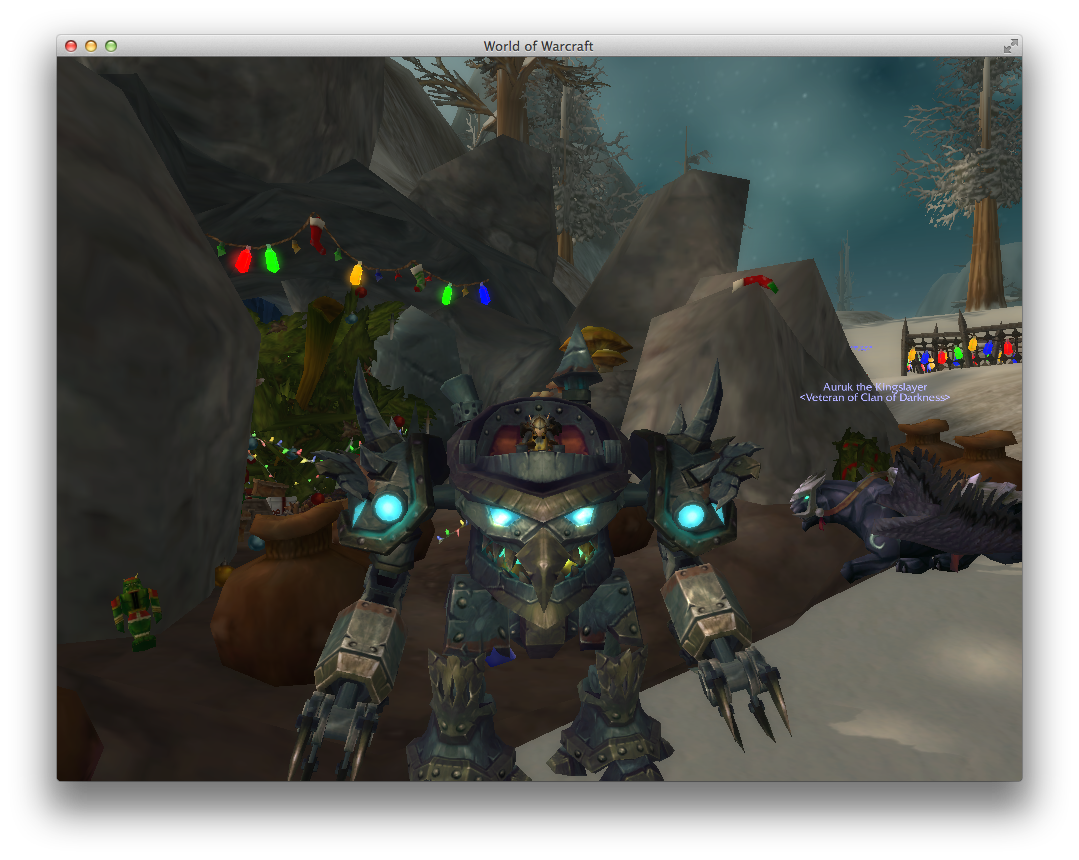 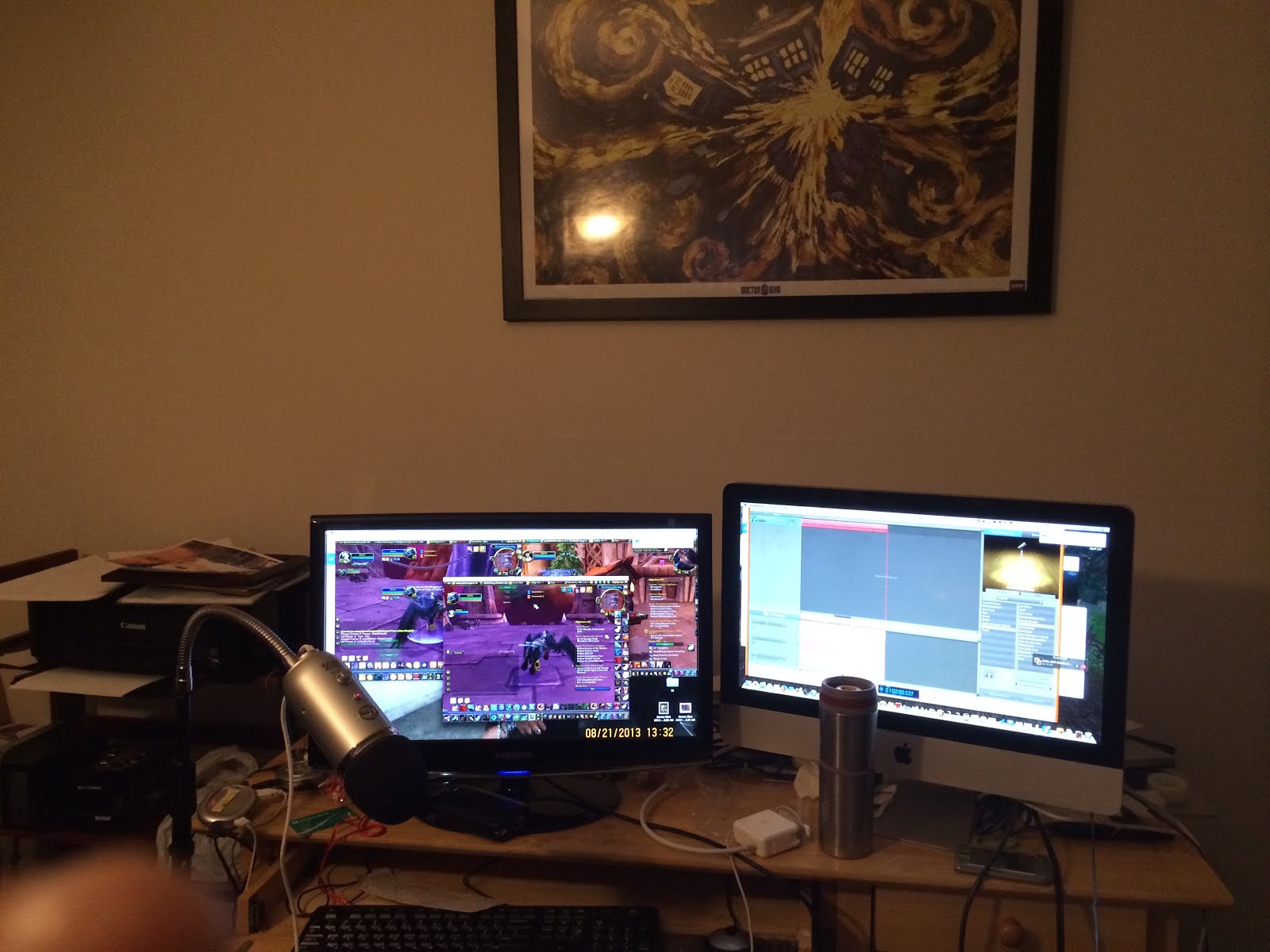 1/ Clan of Darkness - Moved my Death Knight across to CoD and started levelling her
* Been questing and pet battling on her - trying to figure how to play a DK again!
** Macros - is there any good ones for Frost DK for DPSing?
*Ran Ulduar for guild achievements - Grats to everyone & great job! 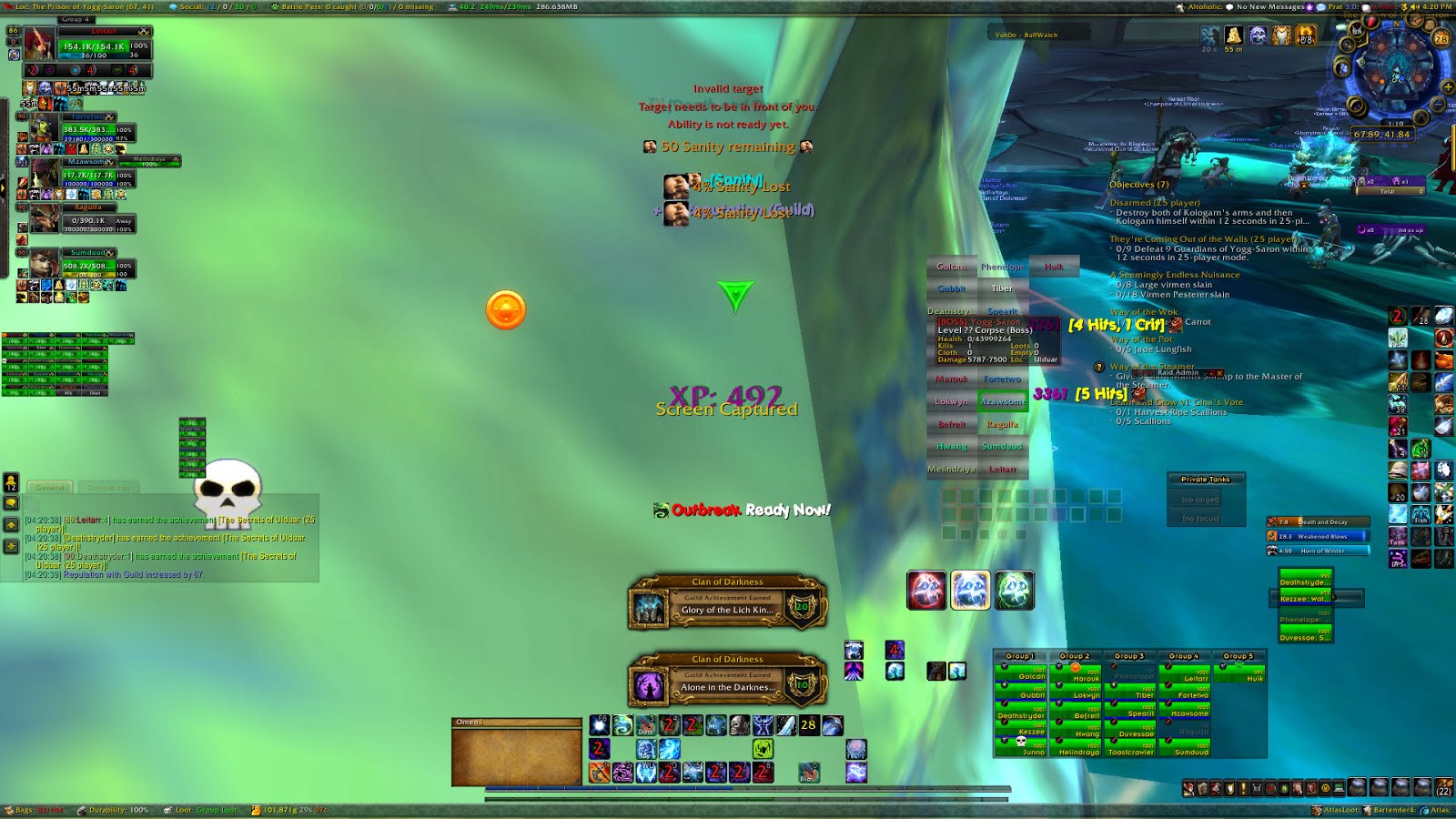 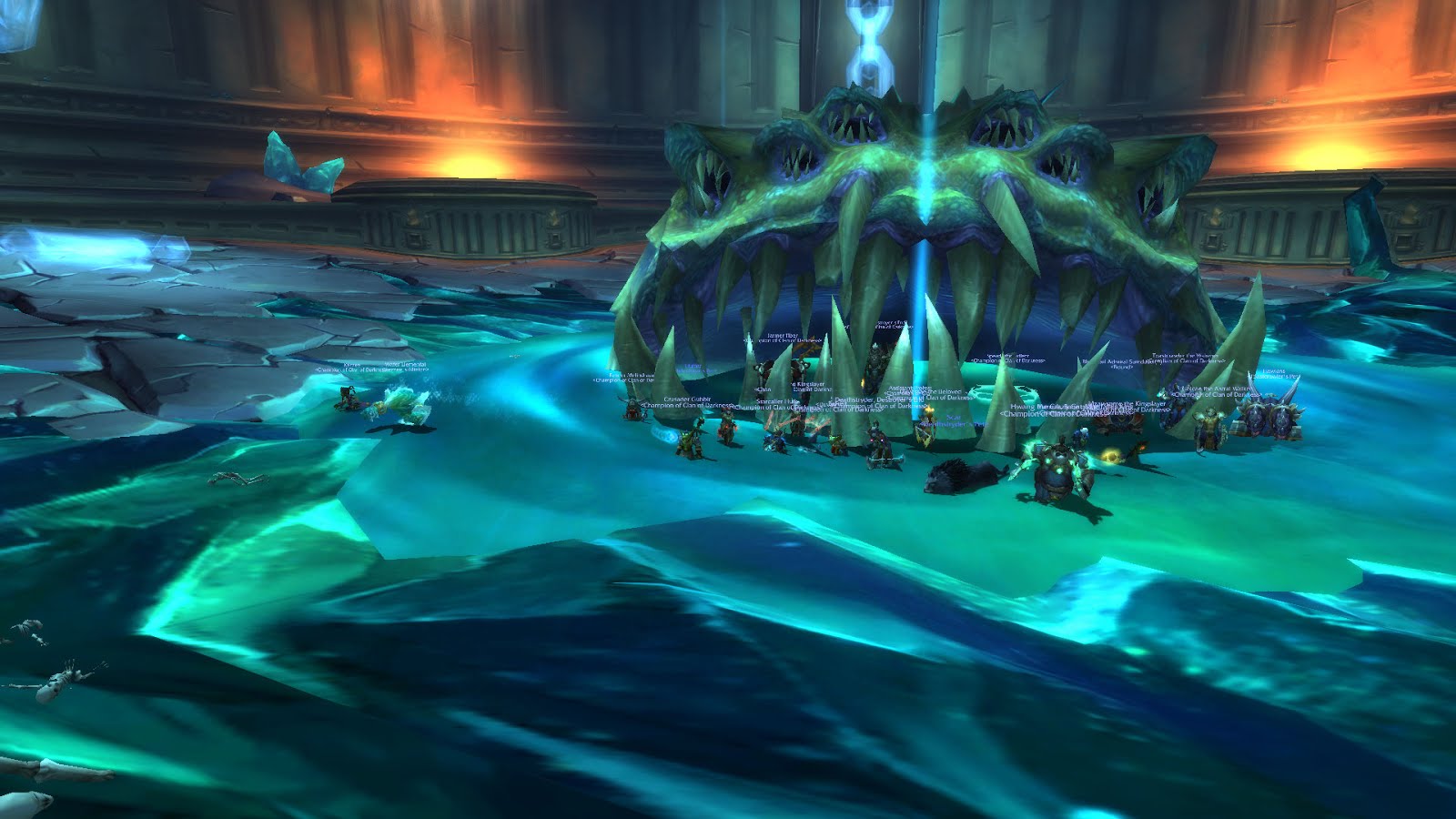 2/ TNAK - My Mage hit Lvl70
* Had to turn exp off! Must remember to turn it back on! lol Feels weird going into dungeons and not getting any exp but yay for rep :)
We ran quite a few dungeons this week - Sethekk Halls, Mana Tombs, Escape from Durnholde and Utgarde Keep 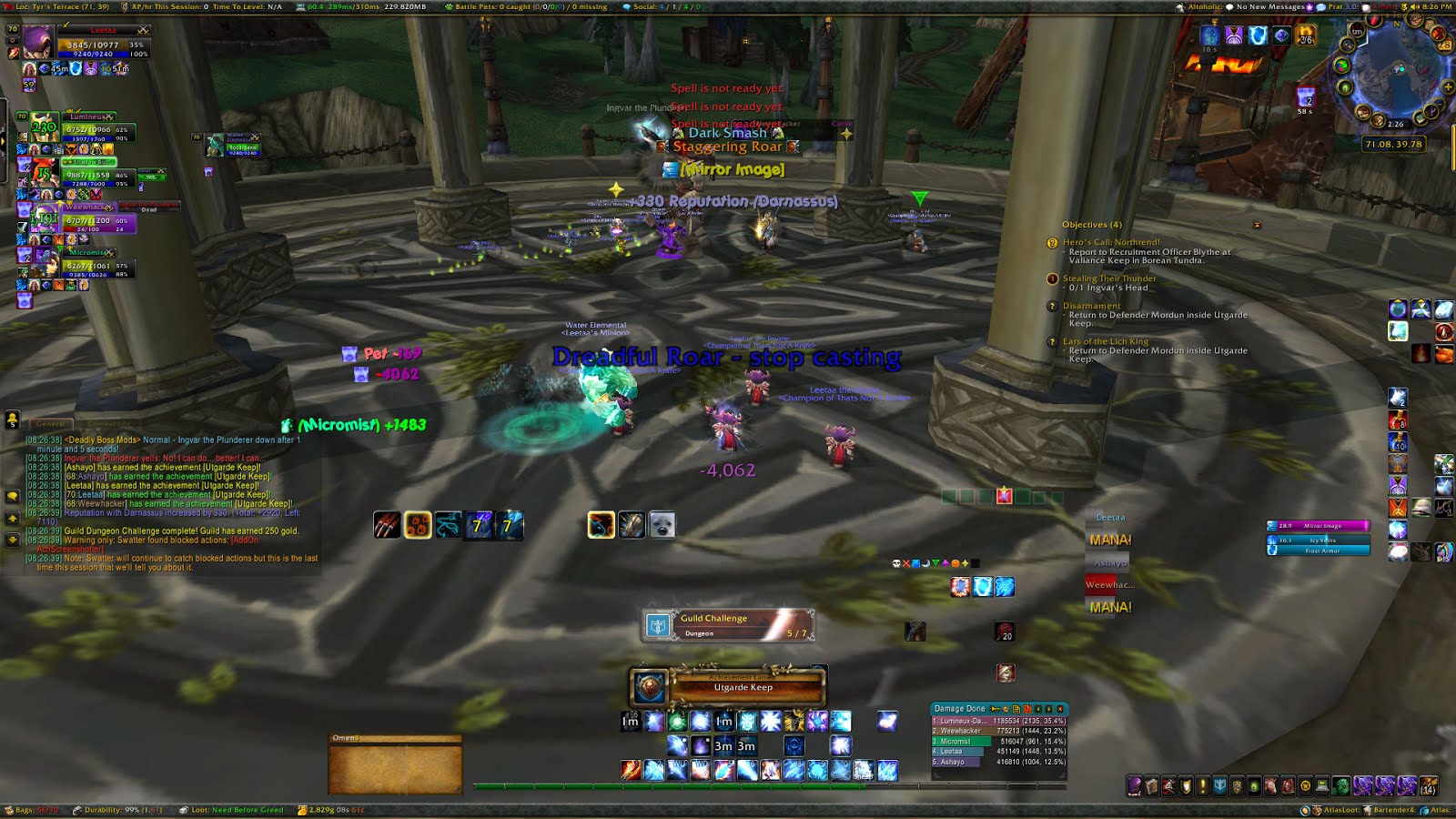 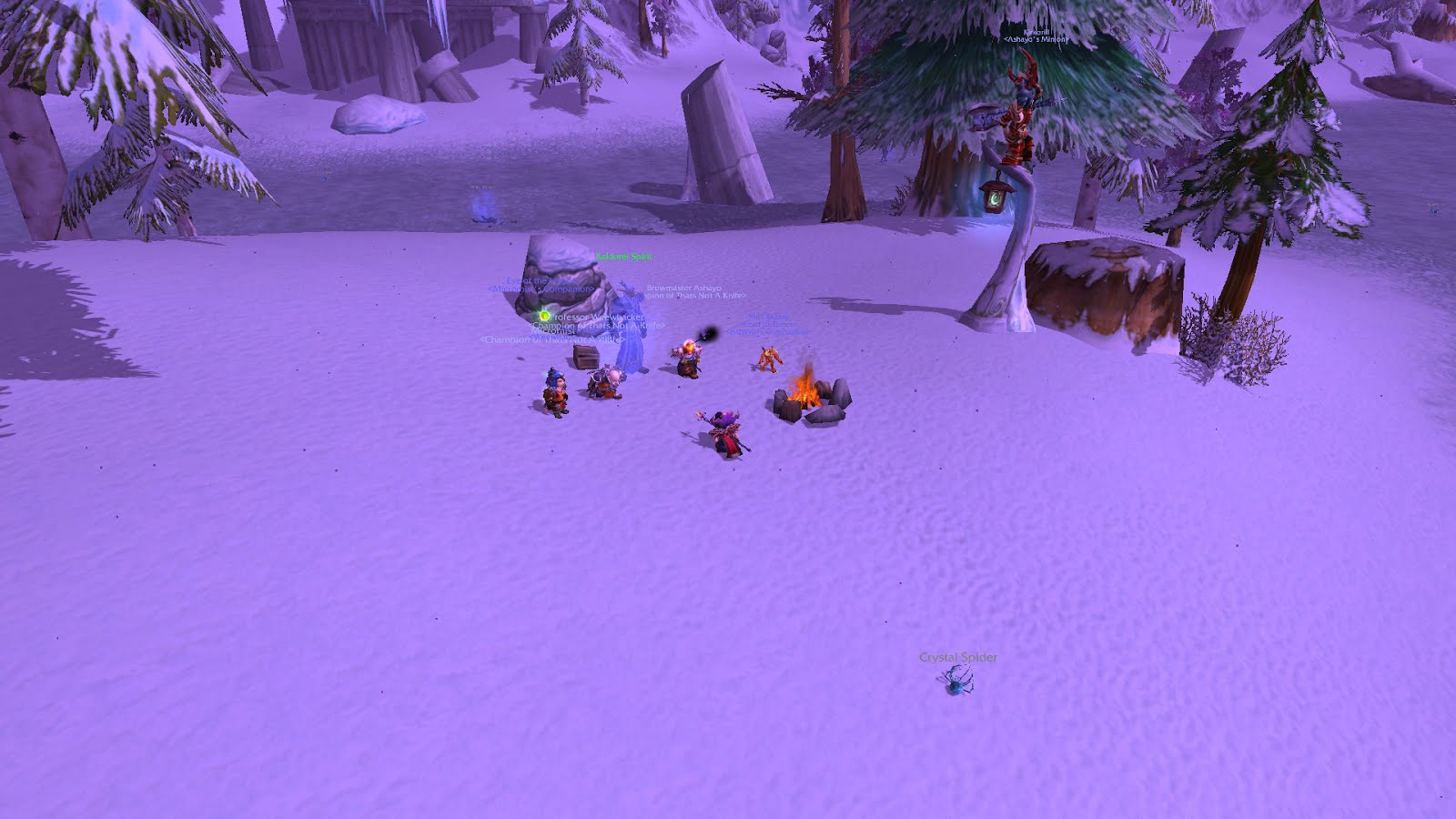 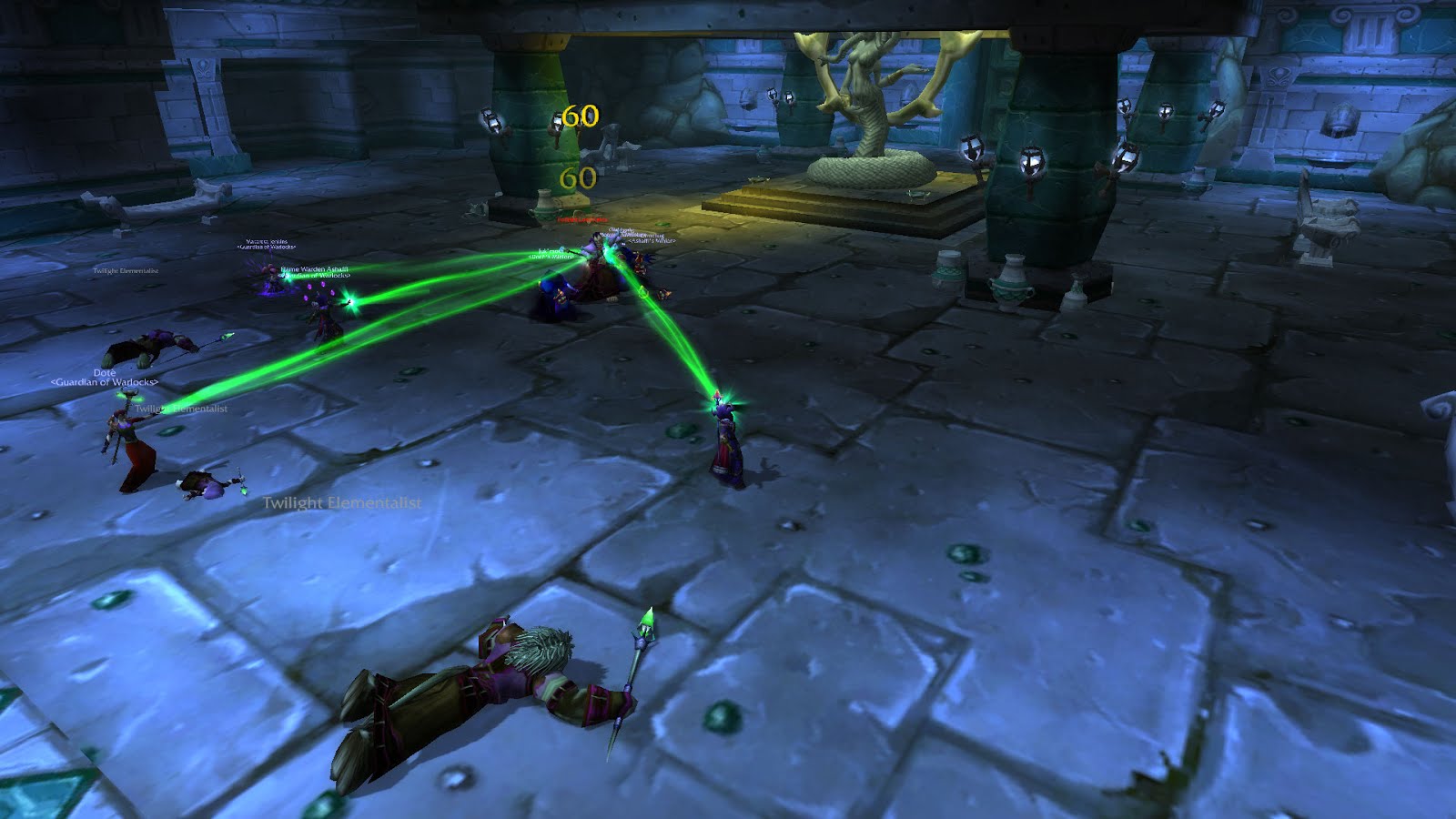 4/ Winter’s Veil - Been running 6 toons everyday - from my Lvl90’s down to my Rogue Lvl83
Finally last night I got the Rotten Little Helper :D 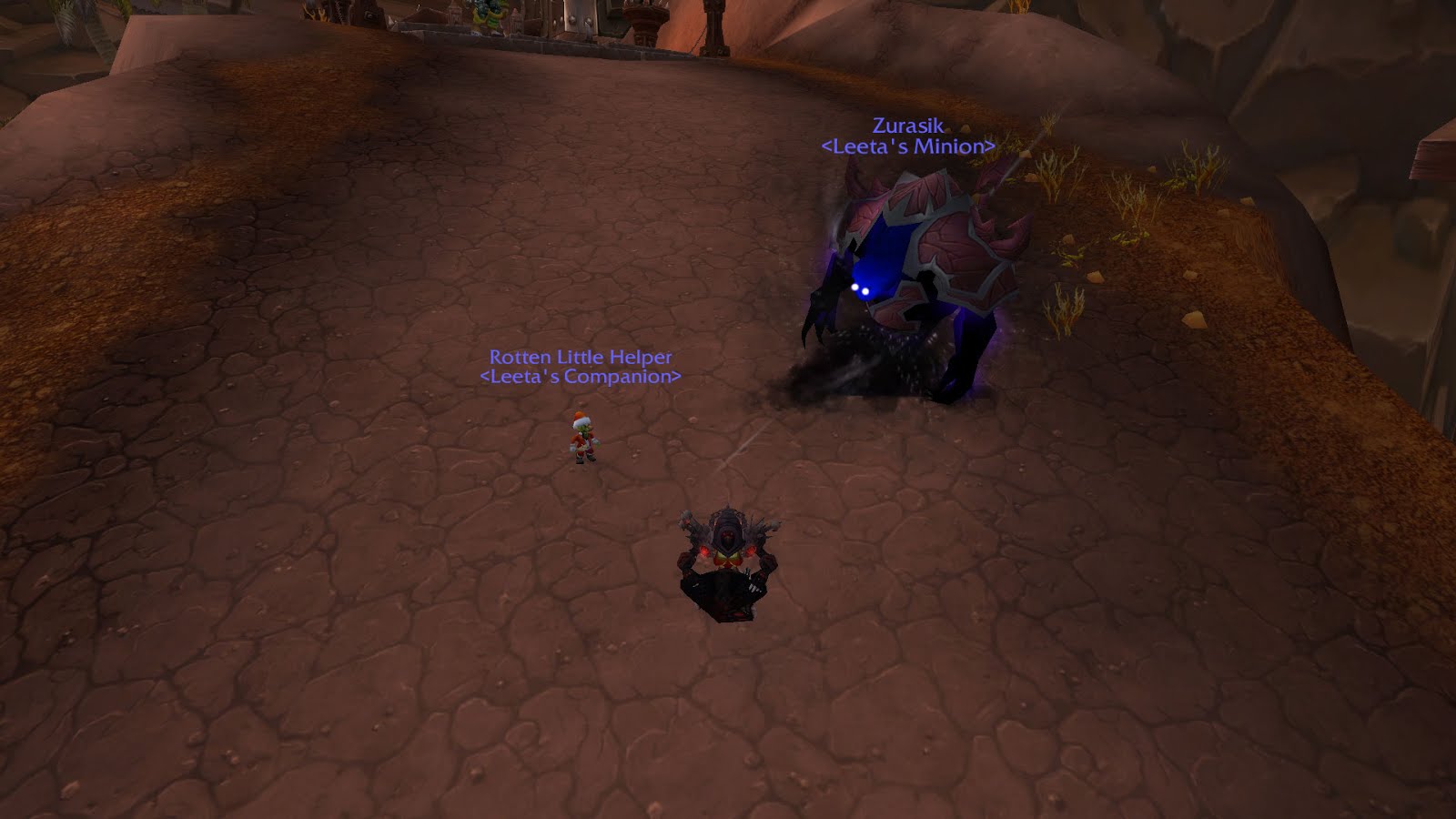 5/ Ran Firelands and got the last of the Eternal Embers for the legendary Staff quest - may get myself a legendary after all :)
* Now up to Delegation - http://www.wowhead.com/quest=29234

What’s everyone’s stance on game sounds/music? Julie doesn’t like hearing the music.
Had to take Everrose out of her fishing gear to battle the Greench - 13 eligible toons

Thursday morning, read 10:00 pm email that a pw change request had been made, and at 3:19 am my password had been changed!! Didn’t follow link (in case phishing), went to battle.net, couldn’t login. Used account recovery page, success. Nothing missing - thank you, battle.net authenticator!!! 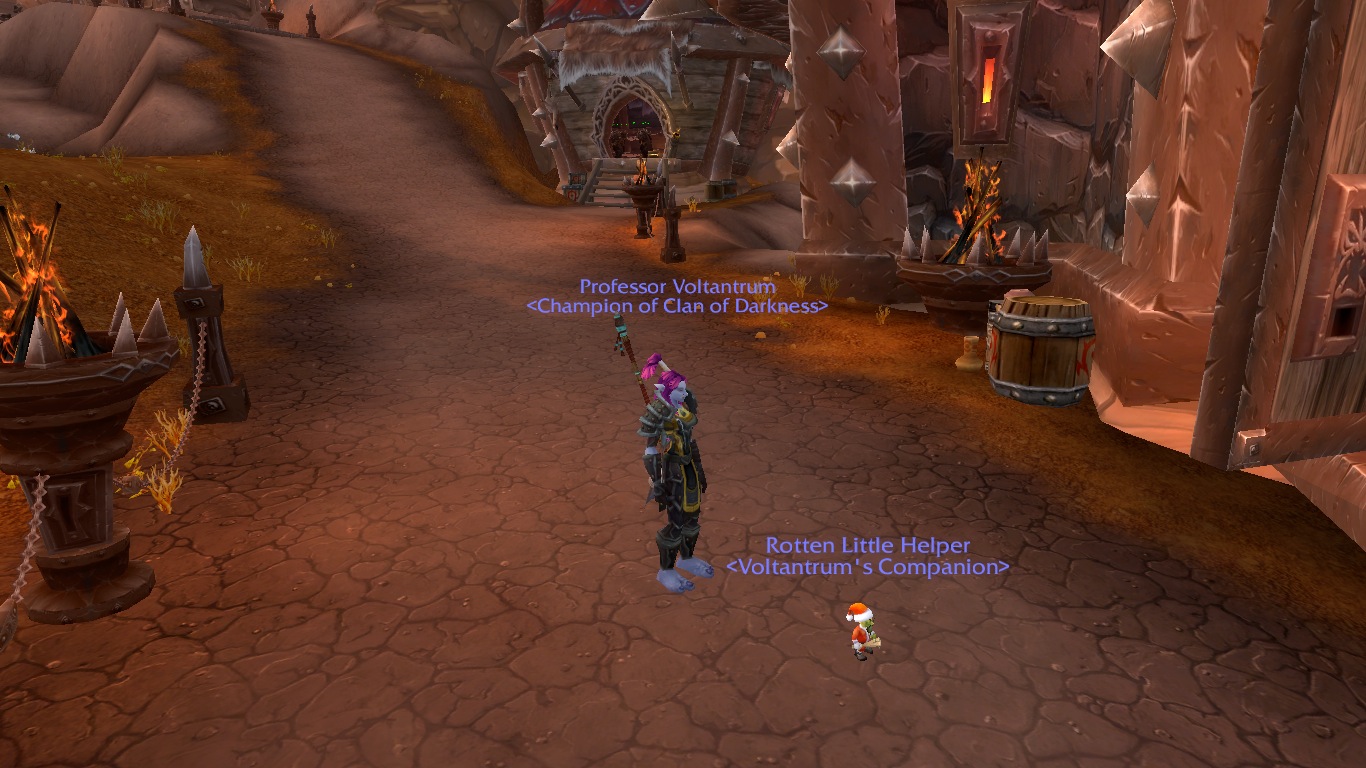 In Game from Duvessae:
Jade Owl Pattern
Listening to Ep 346. You may already have the answer, but the jewelcrafting patterns drop from doing the Serpents’ Eye Daily

Thanks for helping create a sense of fun and family in game. I'm glad to be part of the CoD family. Though I rarely get to visit Earthen Ring, I enjoy keeping up with several of you (somewhat sporadically) on Twitter.

In the meantime, what little time I've had to play of late has been used creating several new alts with my kids on a PVP server (shudder). I will say it has been nice reconnecting with some ok guild friends who made the leap to the server over a year ago.

Props to the high level Tauren Druid who pulled one of the four crocolisks off my lowbie rogue and saved me from a corpse run. Boo to his Pandaren Monk friend who killed me almost as soon as I stepped off the boat. Boo to the level 90 undead Mage/Orc hunter team griefing lowbies in Loch Modan. Thanks(?) to the level 90 undead paladin who noticed I was stealthed AFK in Wetlands (I was about level 24) and patiently for me to return and stand up before killing me. I guess he didn't want me to miss the fun!

Well, Dec 24 is here, so I guess I should go do some shopping!

For the Alliance! (Sometimes) for the Horde! For getting ganked repeatedly?!? Why? For the family! And for Ctrl Alt Wow!

Liteharted and his many (and increasing) alts

Good Morning CAW crew,
It has been an awful long time since I have written in and wanted to drop a note and let you know how things have been going. I also was a bit surprised to find out you have an entirely new cast. The last time I was enjoying your podcast you had 3 stellar gentlemen, whom will always be fondly thought of, but in catching up with an abundance of missed episodes, I must say you ladies are totally awesome and could not be more pleased with the new lineup.
Well, I certainly have been busy in game despite my lack of communication. I am happy to say I have gotten all of my Alliance toons to 90 (11) and have 3 of my Horde toons as well. My goal is to have all 22 characters to 90 before the next expansion, which may be a bit optimistic, but will try nonetheless. They are all LFR geared (90’s) and the remaining toons have their Timeless Isle gear sitting in their banks waiting on them. I am also very happy so say that I finally completed, and received, my Legendary cloak. It took a while but is well worth it. It is the first time I have gone after a legendary item and stuck with it. I highly recommend the journey. As you can see, my altoholic tendencies have never wavered, LOL.
I want to thank you all for the wonderful job you do and wish you all the best, an extremely Happy New Year, and the most success in the coming year. Keep up the excellent work and look forward to hearing you each and every week.
P.S. It would be awesome to join COD again with one of my alts if you would have me.
Regards,
Segwick
“For the Horde, for the Alliance, and for the Legendary”

I wanted to be in time for your 7th birthday, but holidays and family have kept me away from some of my favorite things!

The point is that I tip , that to the best long-term show out there! Congrats on 7 years Ctrlaltwow -

And happy New Year to you all!

It’s been a work filled week this week so here’s my audio and the last three days have been fun split shifts. Plus Nikki broke up with her new guy after 2 weeks just when I think I have her all put back together she go’s and shatters herself again. Lastly watch the Dr who Christmas special I had tears.

Hey gang!! Well what have I done in game this week?....NOTHING!!!!! I've been flat on my back with the nastiest flu bug!!! But as Santa has many little helpers, I have one big awesome helper in Big Steve!!! He will be filling in for me this week and you know he's gonna do an awesome job!
Take care everyone!
Donnie


Hello Ctrlaltwow Crew
It has never happened that I write to you 2 weeks in a row but I come bearing a gift.
I won the top 25 in Guild activity competition we had last week in the game. I won an Armored Bloodwing and I thank Donnie for the gift. I already have this mount so I thought I would give it to you Ladies to give away.
You might be able to have a competition of your own and get somebody to make you a new Email bumper.
Anyway I love the new line up. You Ladies are awesome. Have a great week.
Sincerely Matahorn
Ps I must thank Donnie for letting me give away my prize.

Posted by Aprillian at 7:48 PM