Sorry it's been a little while since I sent anything in, been busy really busy this summer but having fun too! Gone to visit my oldest son and his family a few times so nice having them up here and very pretty at the coast. Other than that painting my home so far bathroom & kitchen are done now only another ten rooms to go. Then off to the workshop and yard not painting but cleaning lol My brother in law is here now for a few weeks so sneaking when I can onto the game, leveling my Shaman got too say I kind of like the globin. And she had a pretty awesome week in the game, got the eye from Jeremy Feasel yep he finely gave it too me! Then she got another Moon Moon and to top it all off got the Unborn Val'kyr, the last two she got today :D
But I really miss all of you, only I know if I log into our guild it won't be 20 minutes more like a hour or two! So for now until my brother in law goes home I'll be good well a little anyway and visit with him, instead of playing the game a whole lot :)
Anyway that's been my week or two and I'm including pictures of the pets. Plus sending two pets too Rogueslayer so if you haven't checked your mail please do. One is a Moon Moon and the other a seahorse home who ever gets them will enjoy.


Love & Kisses
Pixie & Junno
for the Horde & Clan of Darkness 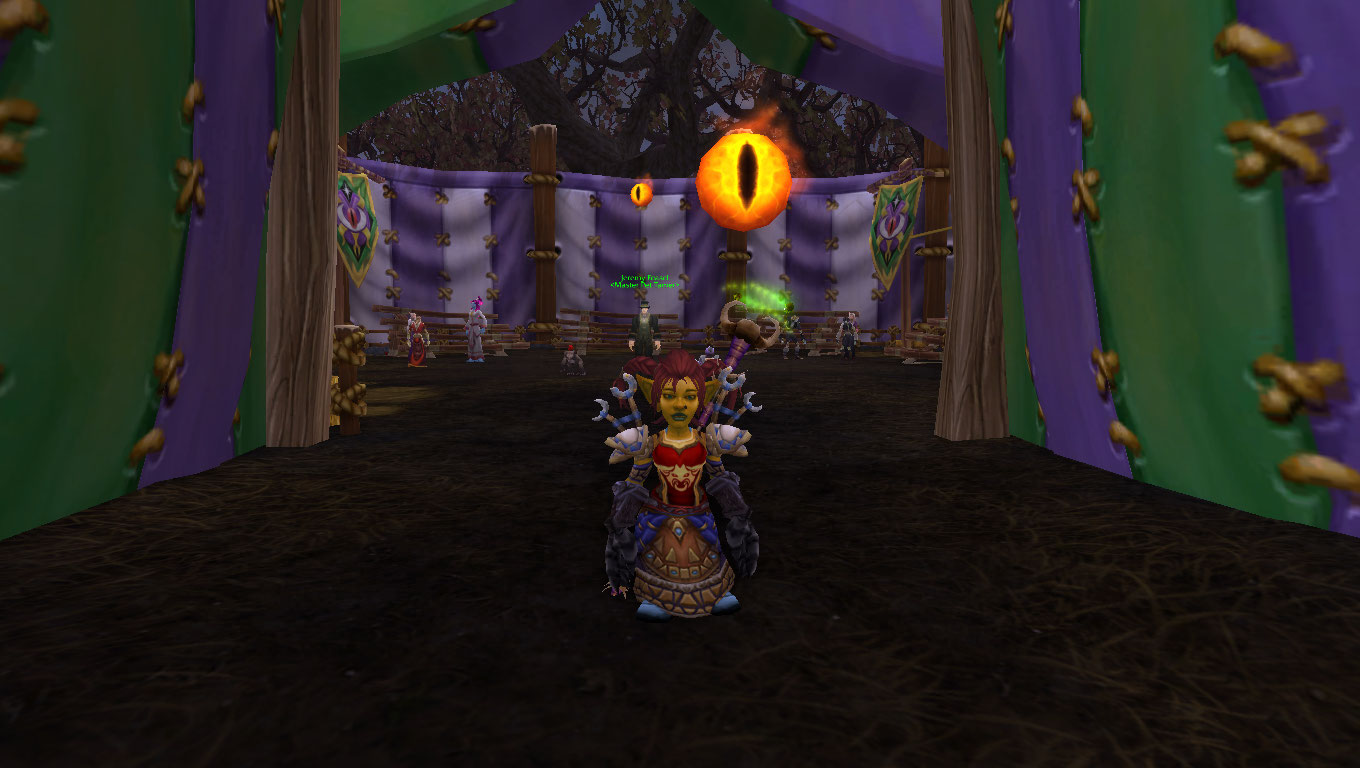 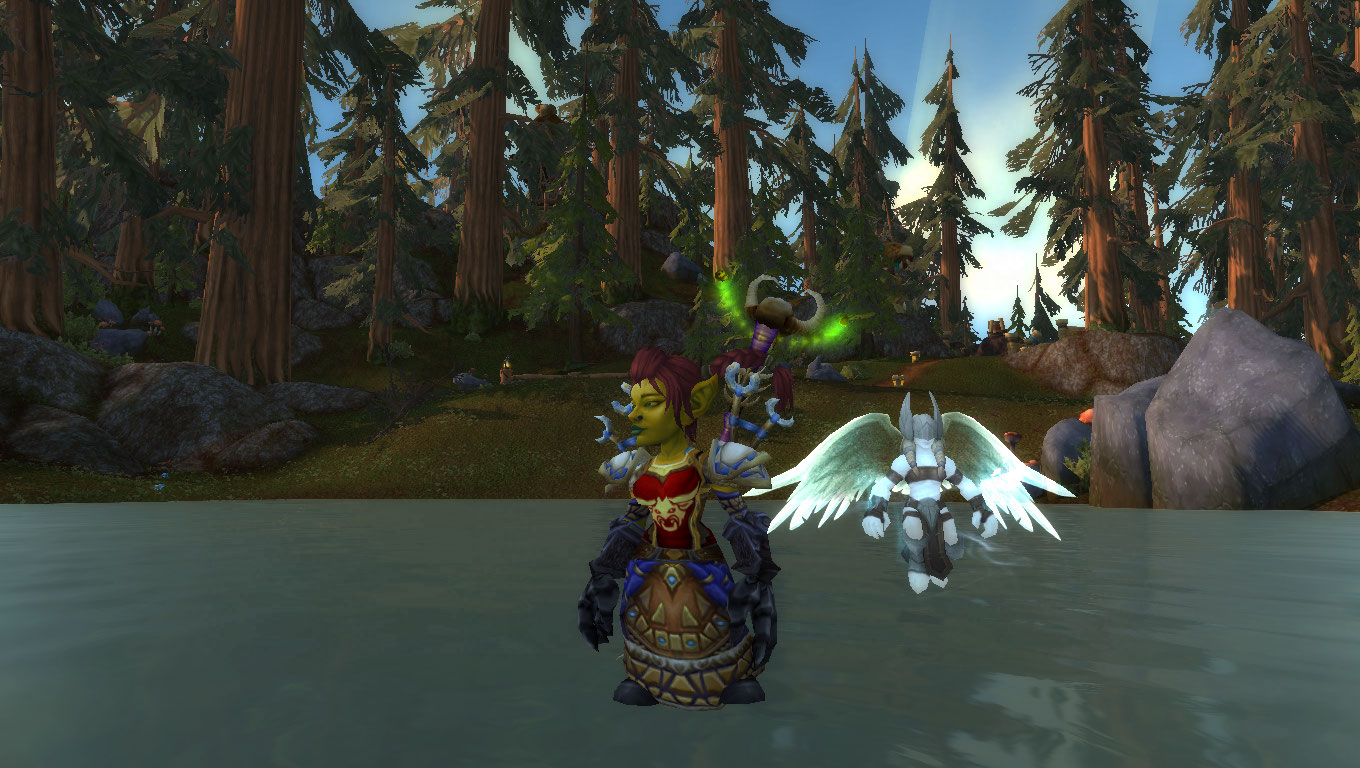 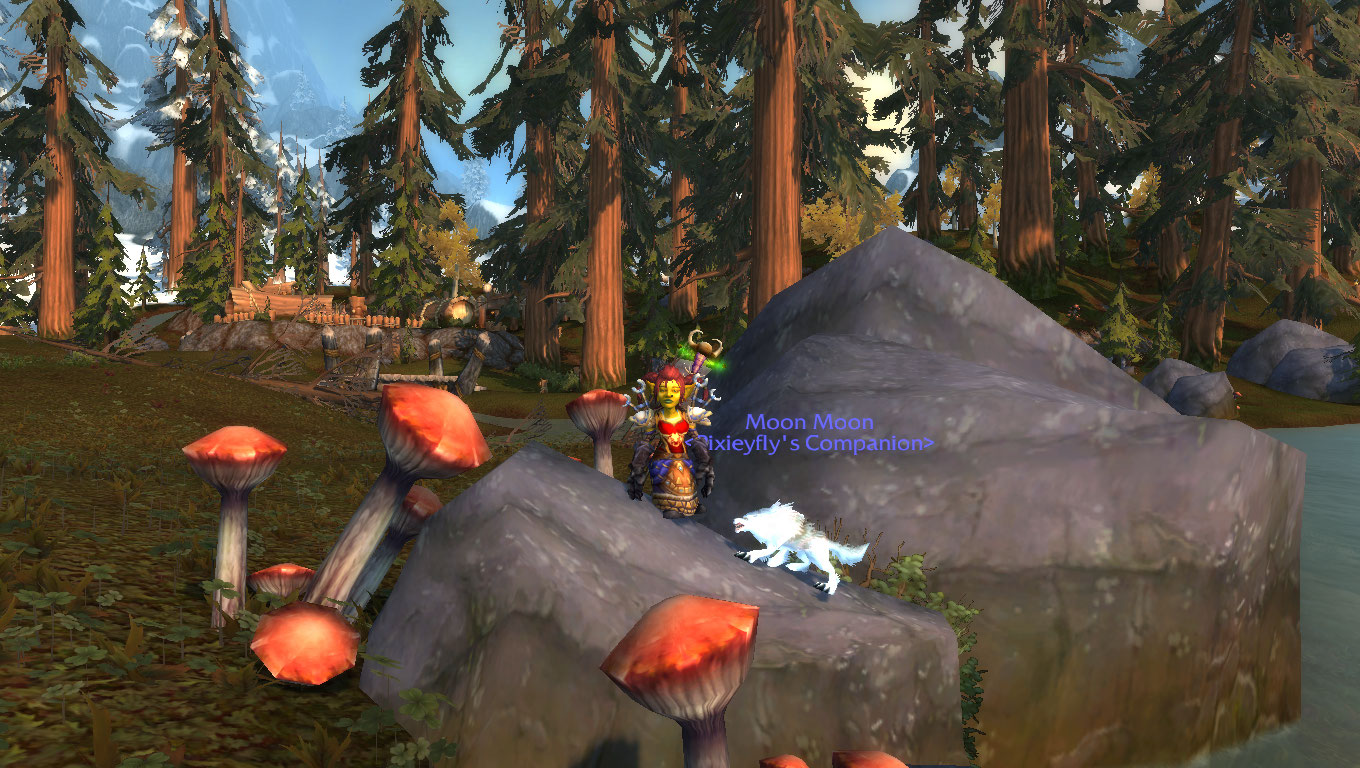 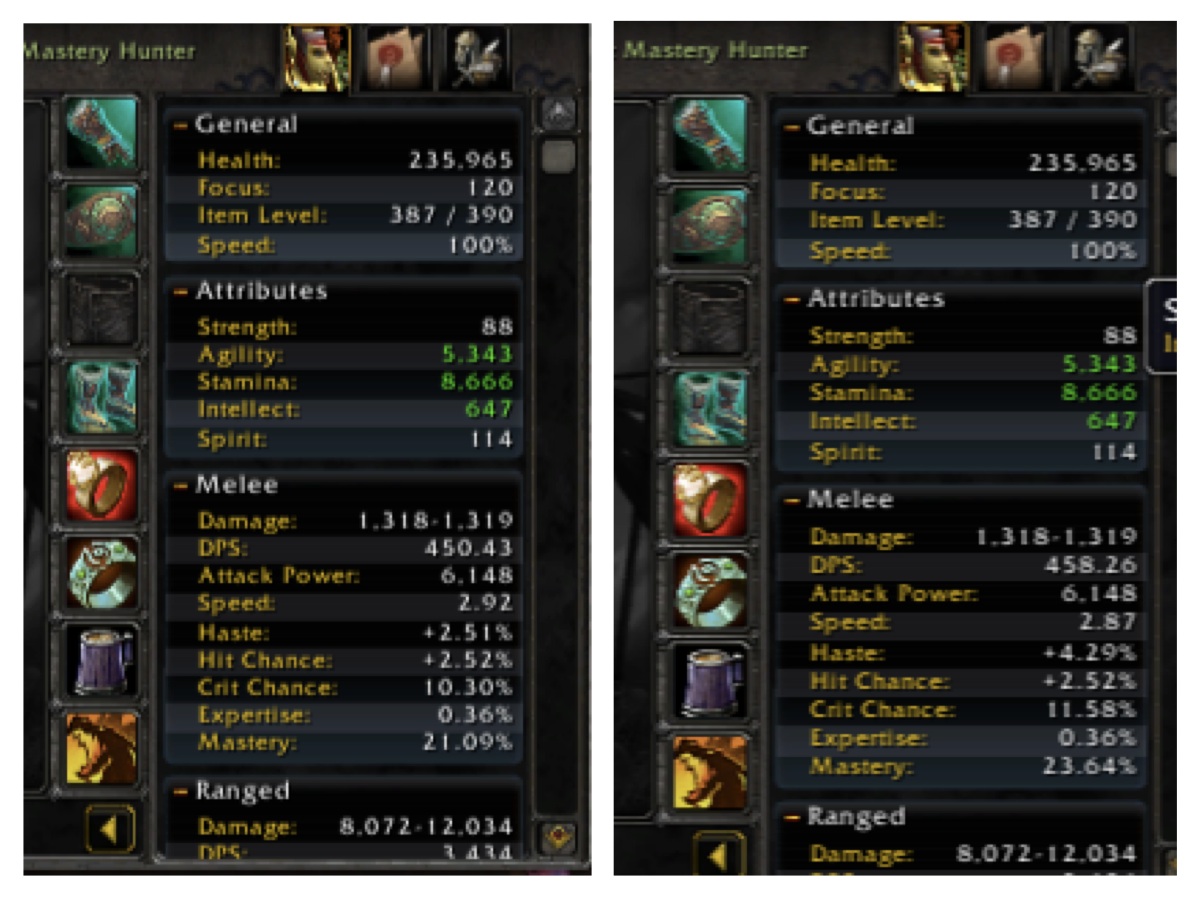 Hunter’s range - bravo
AOE Skinning?
Forgot there’s no timer on mammoth mount.
Fighting Tank in Tol Barad, how can I see where he is?
Upgraded Auruk’s gear for like under 500g 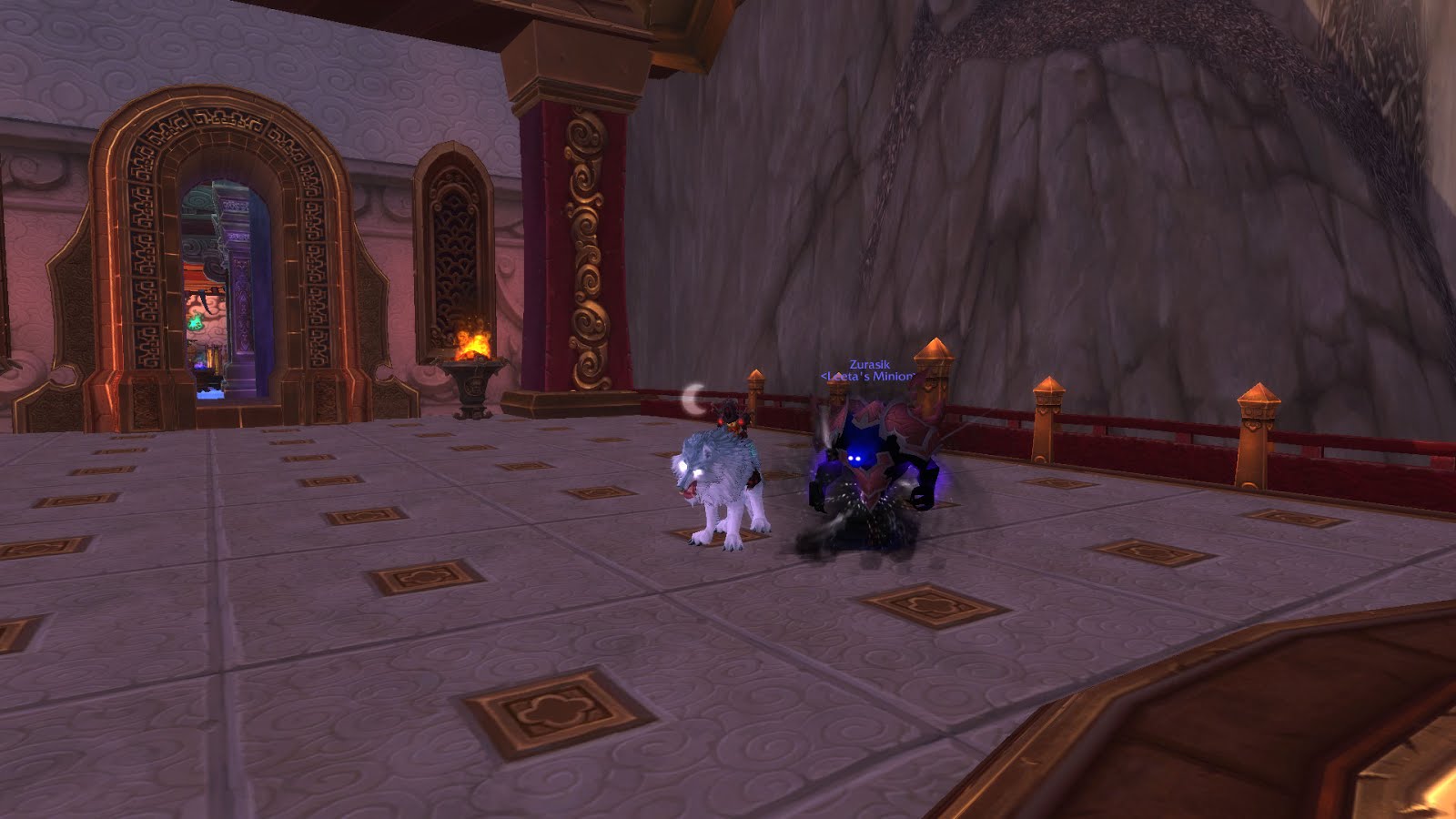 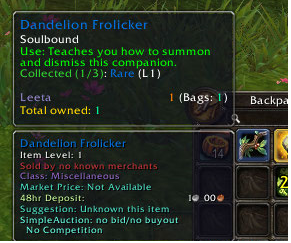 Only 16 more things left on Need A Bigger Bag Achievement!
b/ Mount runs
ZG, Stonecore, Vortex Pinnacle, Onyxia, Tempest Keep and Warbringers!
The Reins of the Slate Primordial Direhorn dropped! Big grats to Ashayo!
http://www.wowhead.com/item=94229
c/ Archy - spent some time dig, dig, digging around Pandaria.
d/ Legendary Cloak Quest
http://www.wowhead.com/guide=1653
Got the 3000 Valor.
Did the PvP part - Glory to the Horde
http://www.wowhead.com/quest=32431
Win a battle at the Temple of Kotmogu
Win a battle in the Silvershard Mines
And now I get to do LFR to obtain 20 secrets! Woohoo \o/
3/ Healers - Maraudon Lvl32-34
Wingy, Mata and I 3 manned Maraudon - mobs were 3-5 levels higher then us! 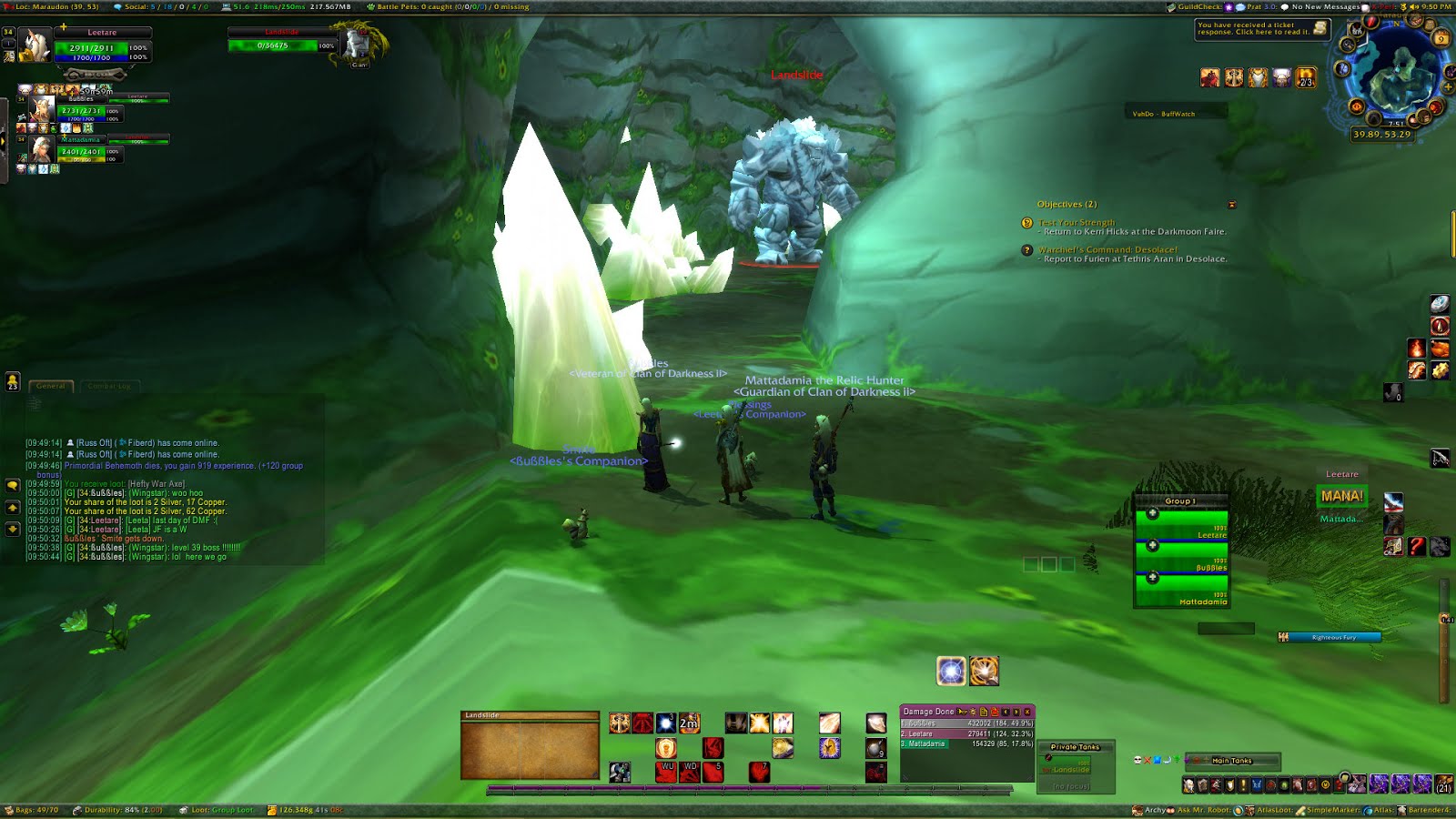 4/ Hearthstone
Played on the iPad - game dropped me out twice yet when I opened the app everything was fine and I continued until the 3rd time when it disconnect me and the game vanished!
Was winning too! Was not happy!
But I made it through the first Arachnid Quarter finally!!
Anub took me the longest time to defeat but I managed to 1 shot both Grand Widow and Maexxna!
http://www.hearthhead.com/curse-of-naxxramas
5/ Warlocks - The Blood Furnace - Lvl60-61
Wingy, Ashayo, Mata and I went to Blood Furnace and rocked it like a… warlock! ;)
DrainLife Pics 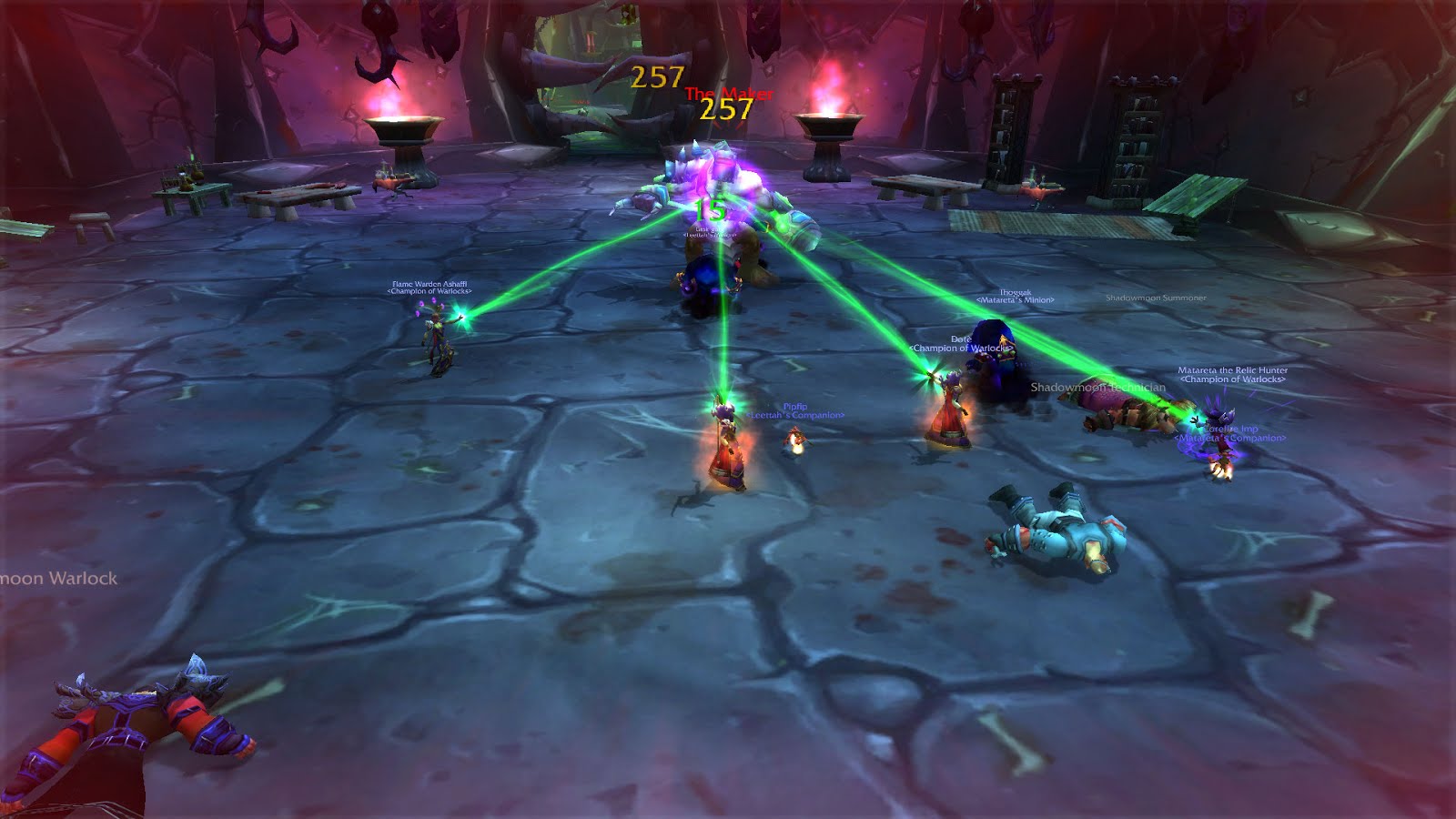 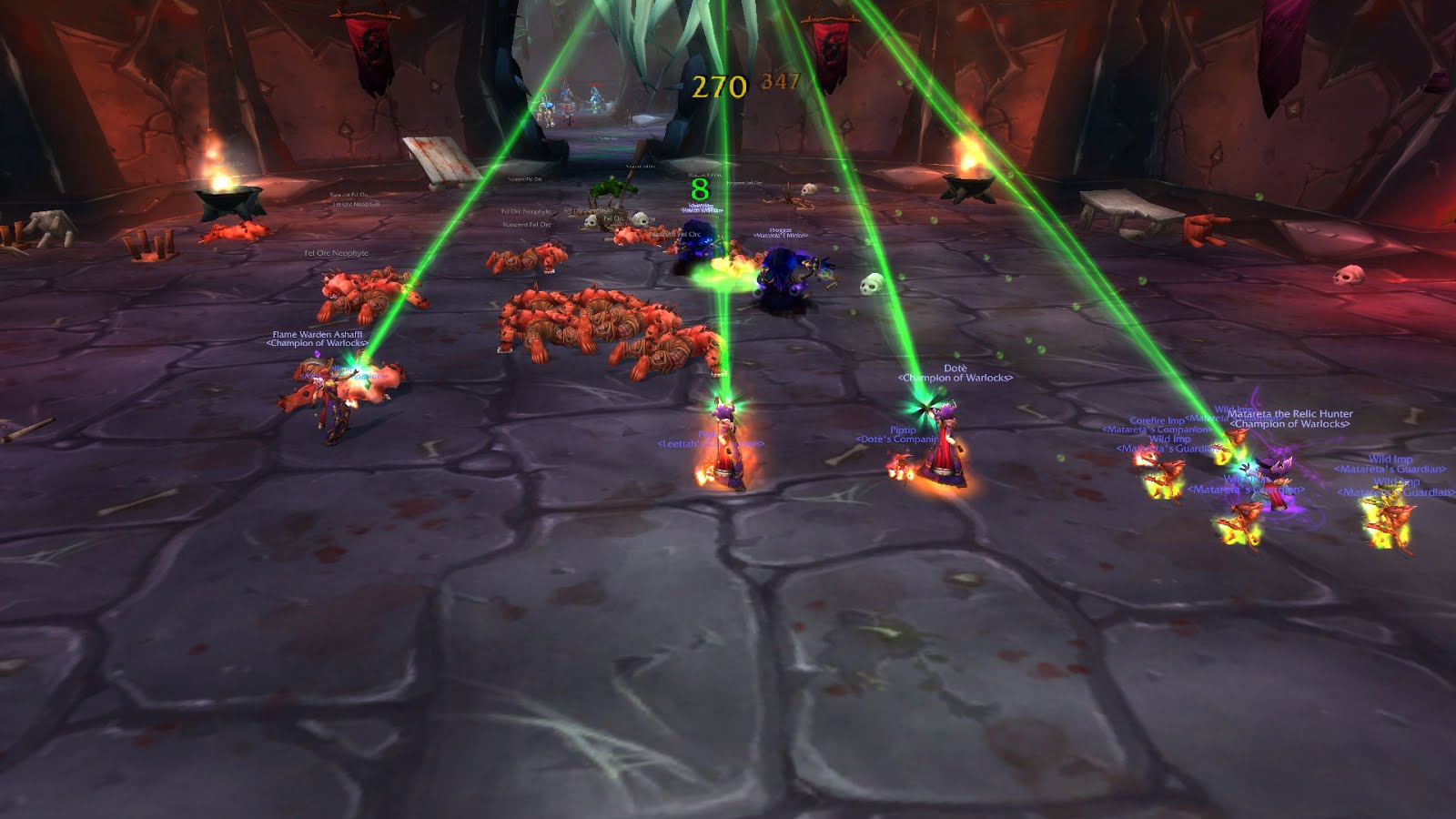 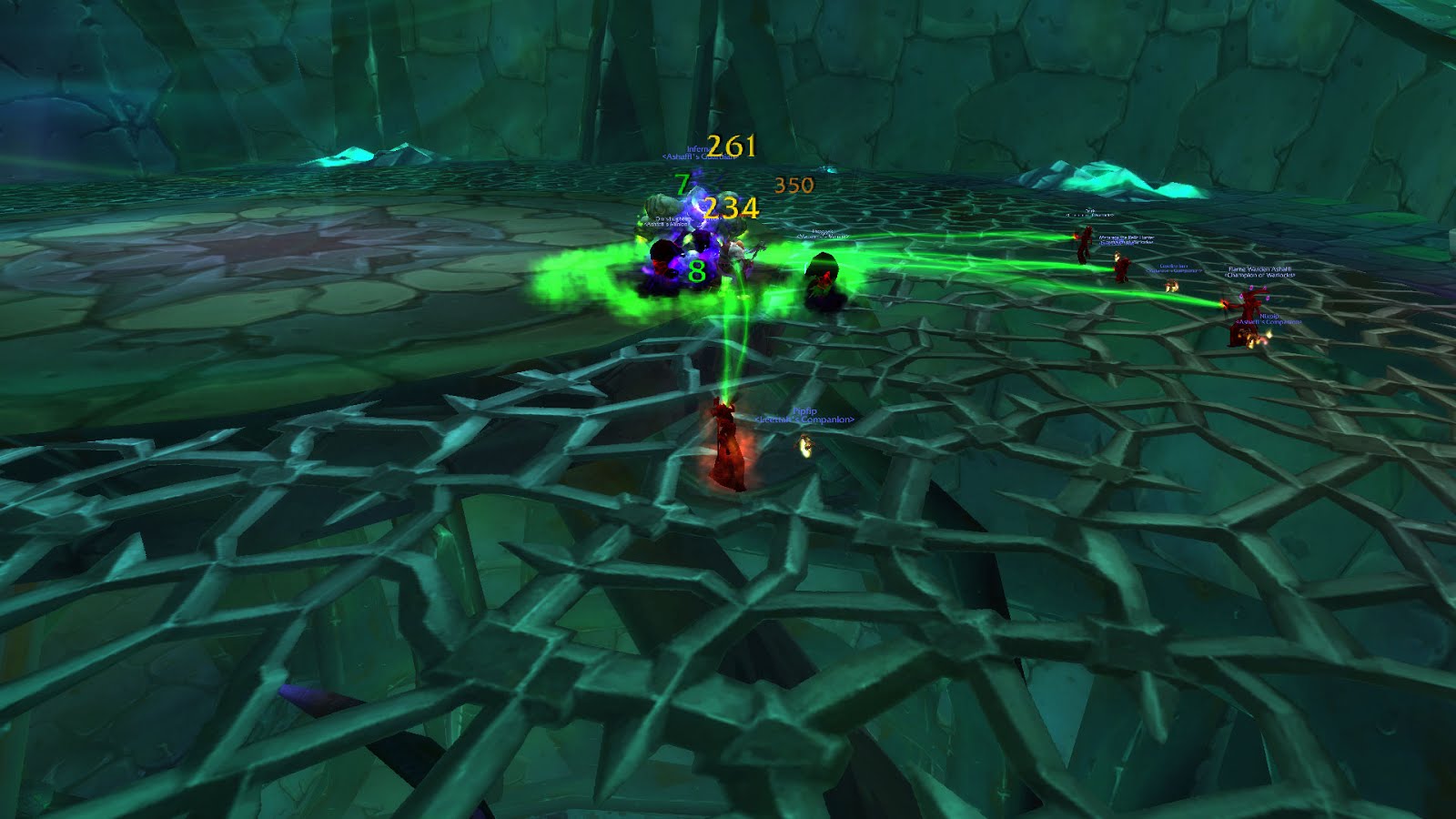 Warlocks rock! \o/
6/  And shout out to Game Masters Soscassien and Babsmorthus for helping resolve my transfer character issue! Thanks so much!


I listen to your podcast every week and enjoy listening what you all get up to and your guild seems like a lot of fun. I am a New Zealander living in the UK and I am on the EU server Stormscale-Horde (strictly PVP) so I thought I'd write in to give advice to my antipodean friend Leeta as she is having trouble getting to the rares on time on the Timeless Isle.
What I used to do is use Falling Flame with a Golden Glider to get around the isle faster.
If I am at the flight point and the call for Huolon comes up on the general chat I aim in the direction of the spawn point and FIRE! As soon as you reach a good height pop your golden glider and if you get it right you should reach Huolon spawn point is 15-20 secs. It takes a bit of practice but once you've cracked it should make your life much easier. The Falling Flame has an hour cooldown so if your lucky it should start to match up with Huolons spawn time.
Hope this helps and keep up the good work everyone.


My name is Lightts on Earthen Ring, Forsaken Monk. I have a few 90's on Agamaggan, but since my brother stopped playing and never did the whole guild thing, I did the whole solo experience. Which didn't stop me from getting Legendary Cloak, full Prideful PVP sets or gearing up in flex...but I think its time for a new aspect of the game, joining a guild and being part of a community.


Over the past week I have listened to a bunch of your podcasts, and decided to roll a character Earthen Ring. The guild just sounds really helpful and just fun to play with. Some IRL information, 25, I grew up in Rhode Island, left in 2008 and joined the Marines. Finished my service in 2012 and now reside in San Diego with my 2 year old daughter. Hopefully I can join your guild and contribute to your podcast, and if not thanks for your time anyways!


only a e-mail from me this week, why? i'm getting to that at the end of the E-mail, now for
a little update of my week in WoW:
First I finally got the Grand Expedition Yak
i finished my 2nd legendary cloak Fen-Yu, Fury of Xuen last week, on my Hunter Wanrong.
I started the next one, with the Monk Gotamí and finished Chapter 1. Also, she has completed
the Cloud Serpents rep for the ability to ride Onyx Cloud Serpent,
her designated flying mount. Her ground mount of choice is the Blue Shado-Pan Riding
Tiger both go with the transmorg set of the Shado-Pan look alike i presented last week
(witch i completed during the week). (screenshots attached for the shownotes).
As for other activities in the game, i haven't really been up to too much in the game over the
last week, due to upcomming IRL stuff.


so in adition to my week in wow, i would let you know that i had a interaction with a GM
last week, and i must tell you about a importent issue.:


If you turn in a quest, and i wanted the quest reward for my transmorg set, and you choose the WRONG
quest reward item, you  are STUCK WITH IT, since the GM's will NOT change your chosen quest reward
to the one you failed to choose.


Thats my little story with the GM's from last week, so BE AWARE of what item you choose.
In closing, i want to let you know, that i will be away from almost any form of internet and playing
WoW for the next 3-4 weeks. If i will be able to be in the chatroom at recording time on sundays...
i don't think so, but i guess we'll have to see. it's what my mobile internet rate can handle i guess,
and the data limit from the provider:(
There will not be any segments comming from me in that time!


P.S.: Rule of Aquisition #19: Satsifaction is not guaranteed


P.P.S: If you have any questions about stuff like Addons, Lore, transmorg, you can still reach me
on Twitter ( @GrandNagus1 ) and via mail ( towerofcommerce@gmail.com ).


Be safe and have a great couple of weeks,

Well hopefully this one will play as i have upgraded my hard disk and had to reinstall everything
biggherth@gmail.com 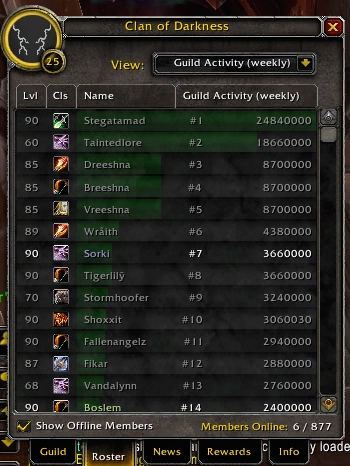 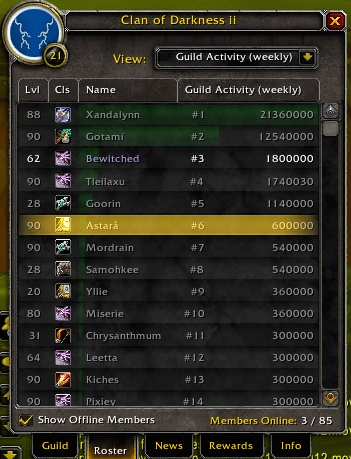 Clan of Darkness
Hello Ctrlaltwow Crew
It has never happened that I write to you 2 weeks in a row but I come bearing a gift.
I won the top 25 in Guild activity competition we had last week in the game. I won an Armored Bloodwing and I thank Donnie for the gift. I already have this mount so I thought I would give it to you Ladies to give away.
You might be able to have a competition of your own and get somebody to make you a new Email bumper.
Anyway I love the new line up. You Ladies are awesome. Have a great week.
Sincerely Matahorn
Ps I must thank Donnie for letting me give away my prize.

Posted by Aprillian at 1:58 PM