Aprillian, Leeta and Rogueslayer discuss another week of playing World of Warcraft, Blizzard's greatest MMORPG. The show features audio segments by Grand Nagus and Donnie of Clan of Darkness.
If you want to join the conversations on the show, we have a live chatroom with in-game giveaways moderated by chatroom-chick Marzana. So come and join us every Friday at 6 p.m. EST / 8 a.m. (Sat. Australia’s time) on our Ustream page!
We also have an ongoing contest. Send an email to ctrlaltwow@gmail.com telling us how you play WoW, either as an altaholic or dealing with it in your family life to being placed in a drawing for a WoW Pet or an Authenticator.


In this episode we have a special guest. Stone from WoWChallenges!

Questions for Stone from WoW Challenges

I'm late!  Late late late,but hopefully this gets to you on time...hehehe...hope you're doing well, did do audio, no music, pics of stuff...sending now!  /hugs!!!!


p.s. gots pics of getting my ring from Khadgar, a funny raid where a guy laid down a WHOLE BUNCH of feasts, and my new transmog look... =D 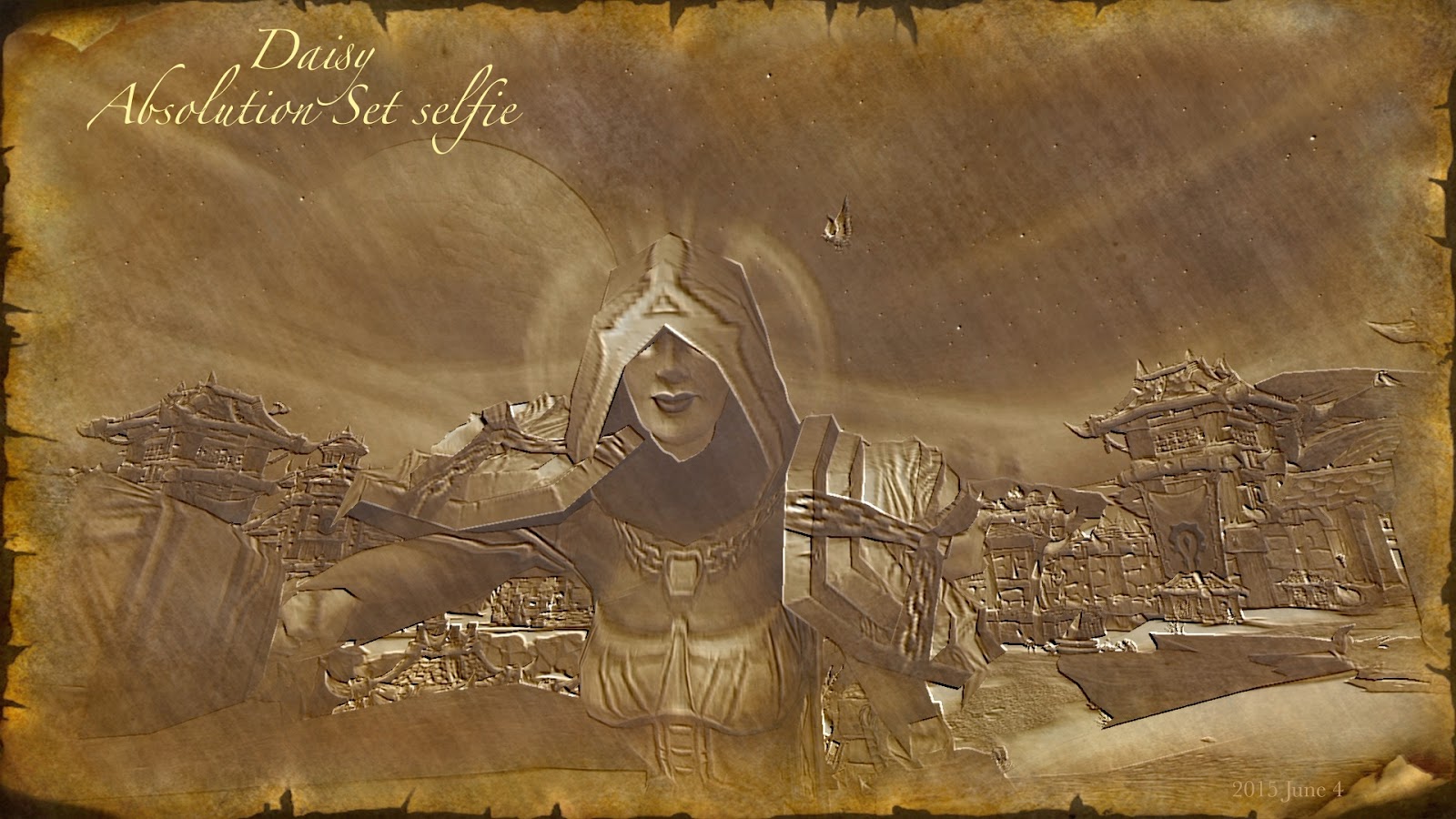 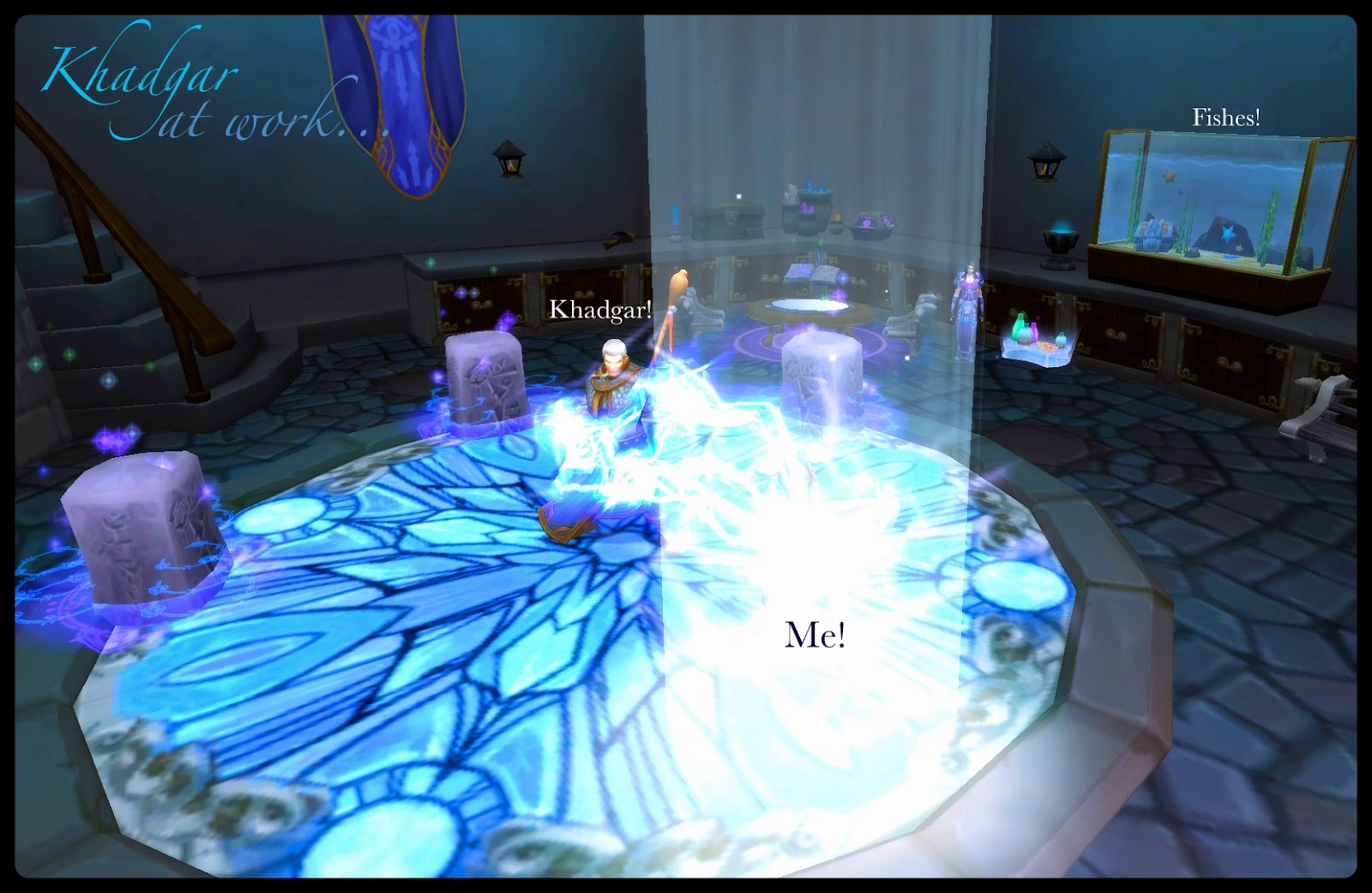 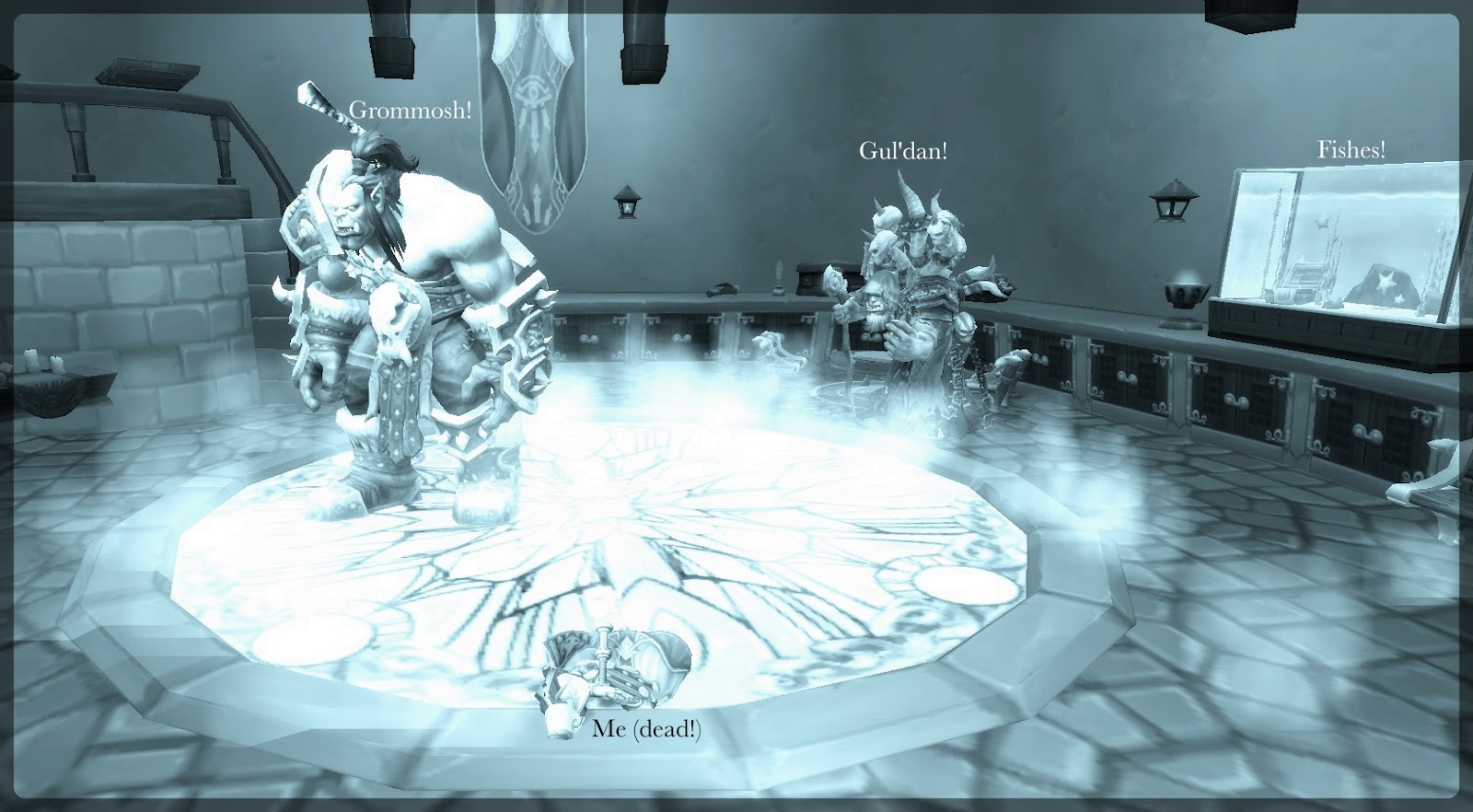 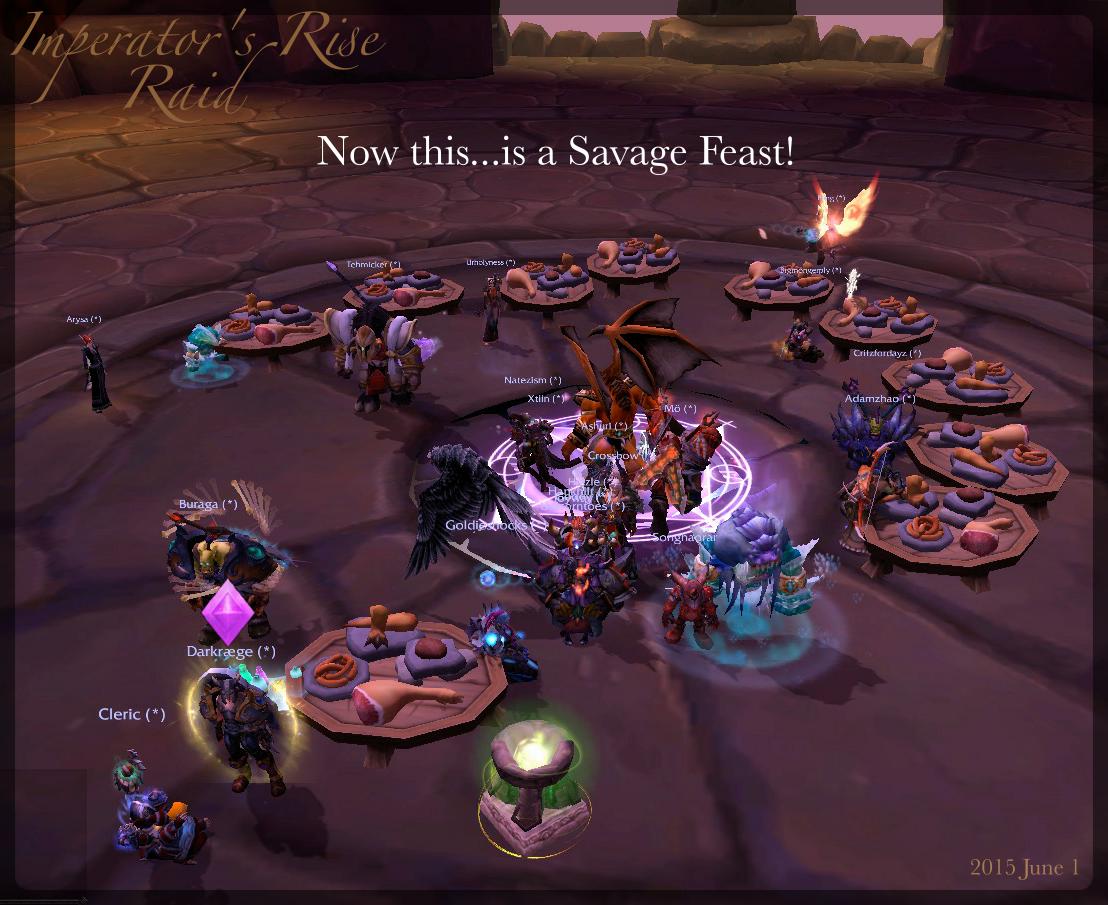 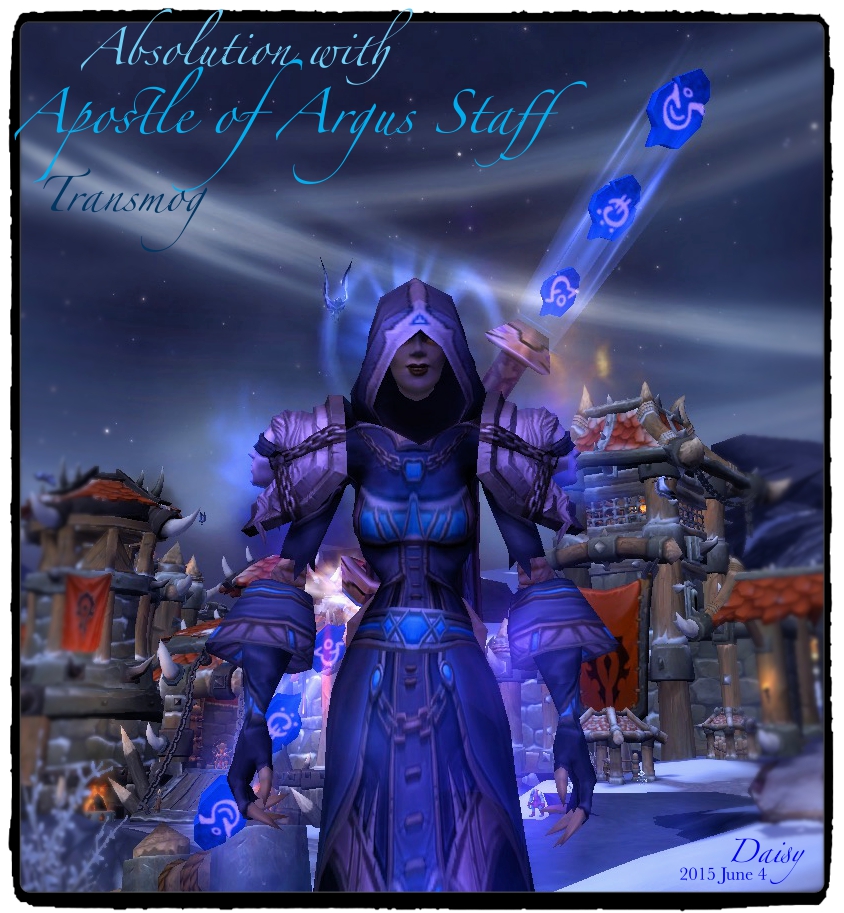 Been killing mobs over in Darkshore.
Logged in and went to explore… a Stag charged from over a hill!! Lvl19!! 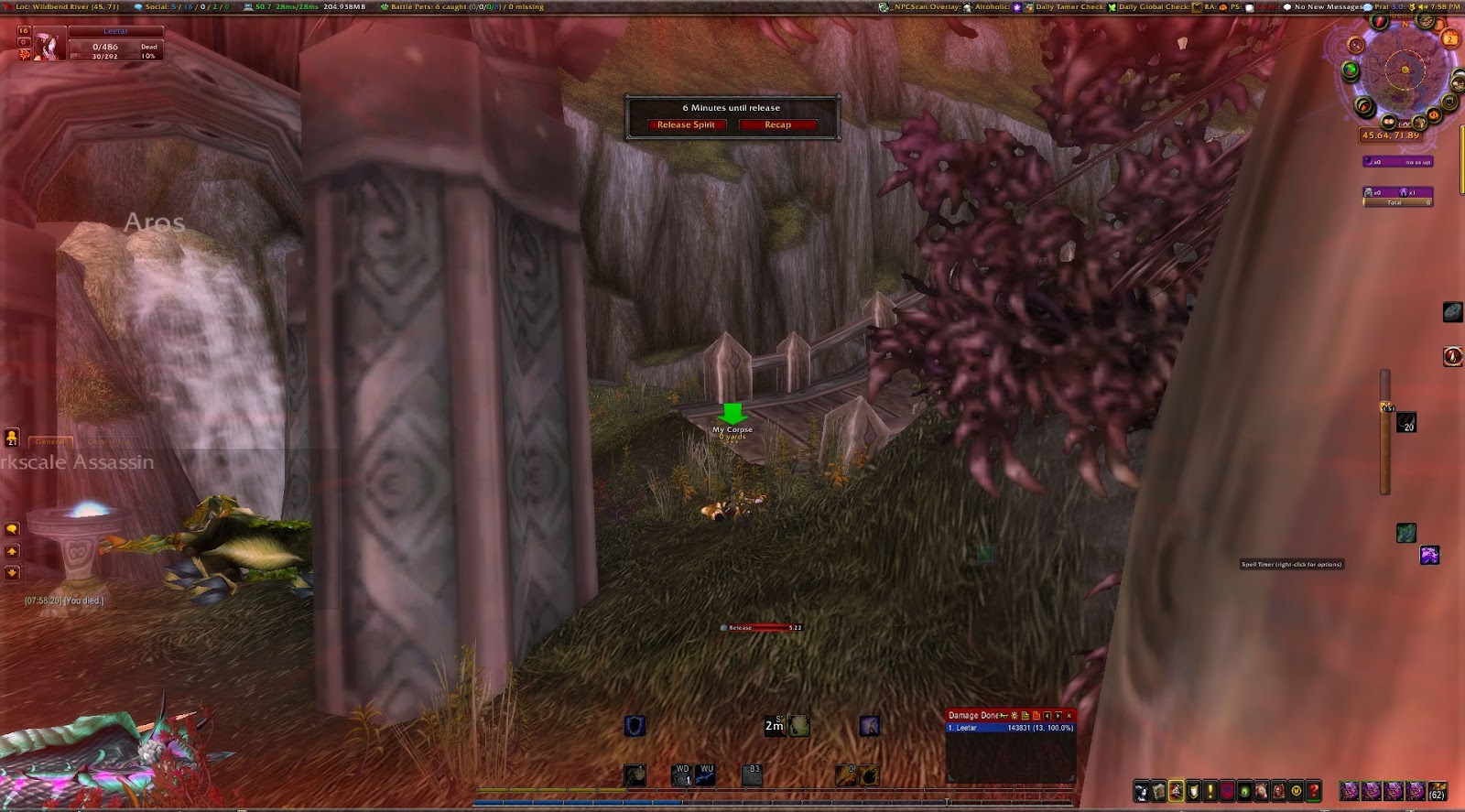 Dead!
So I decided this time round I would make a Pally!
Blood Thirsty Paladin - Leetaa
Dwarf to be precise! 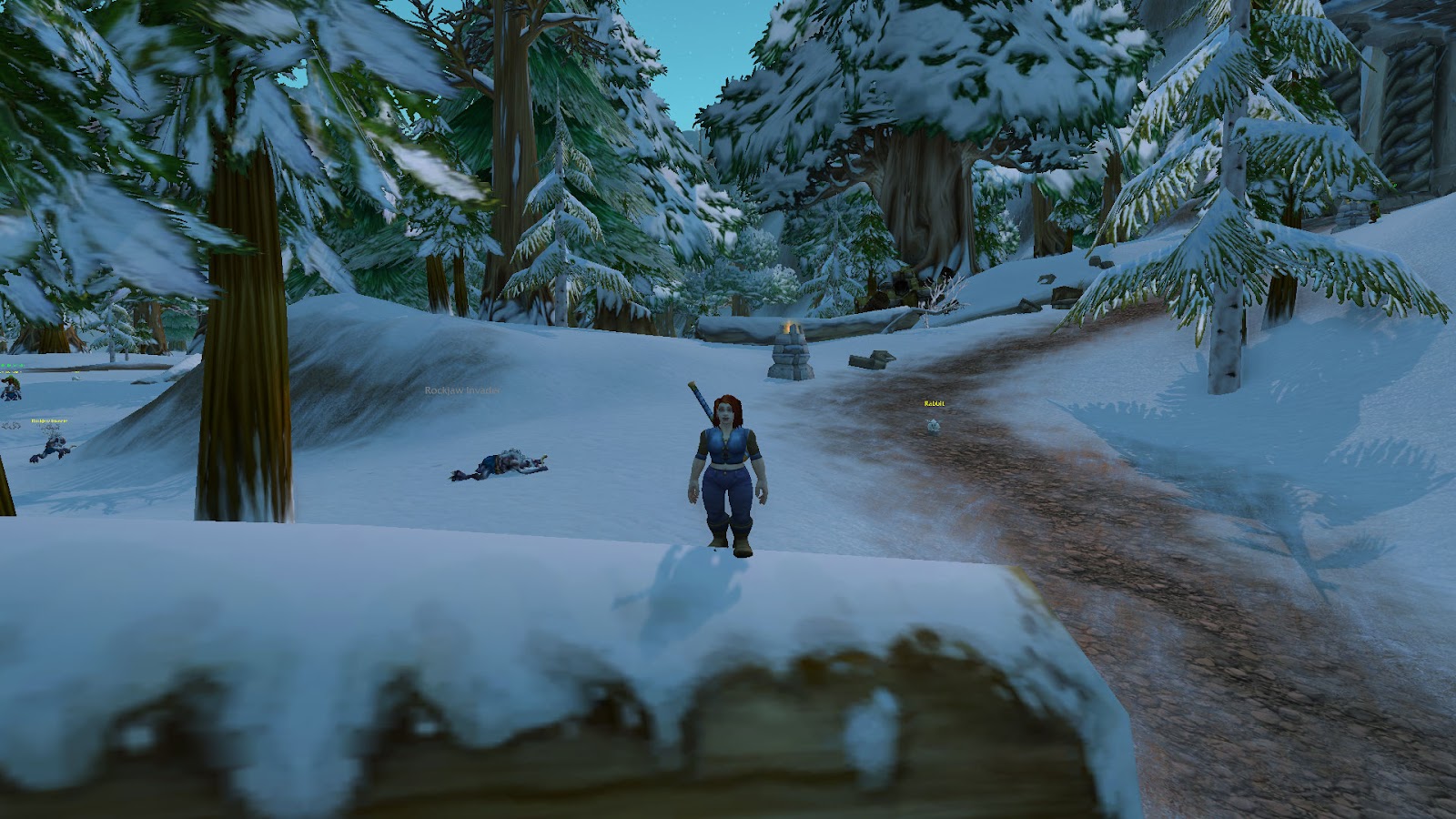 She is currently Lvl7! 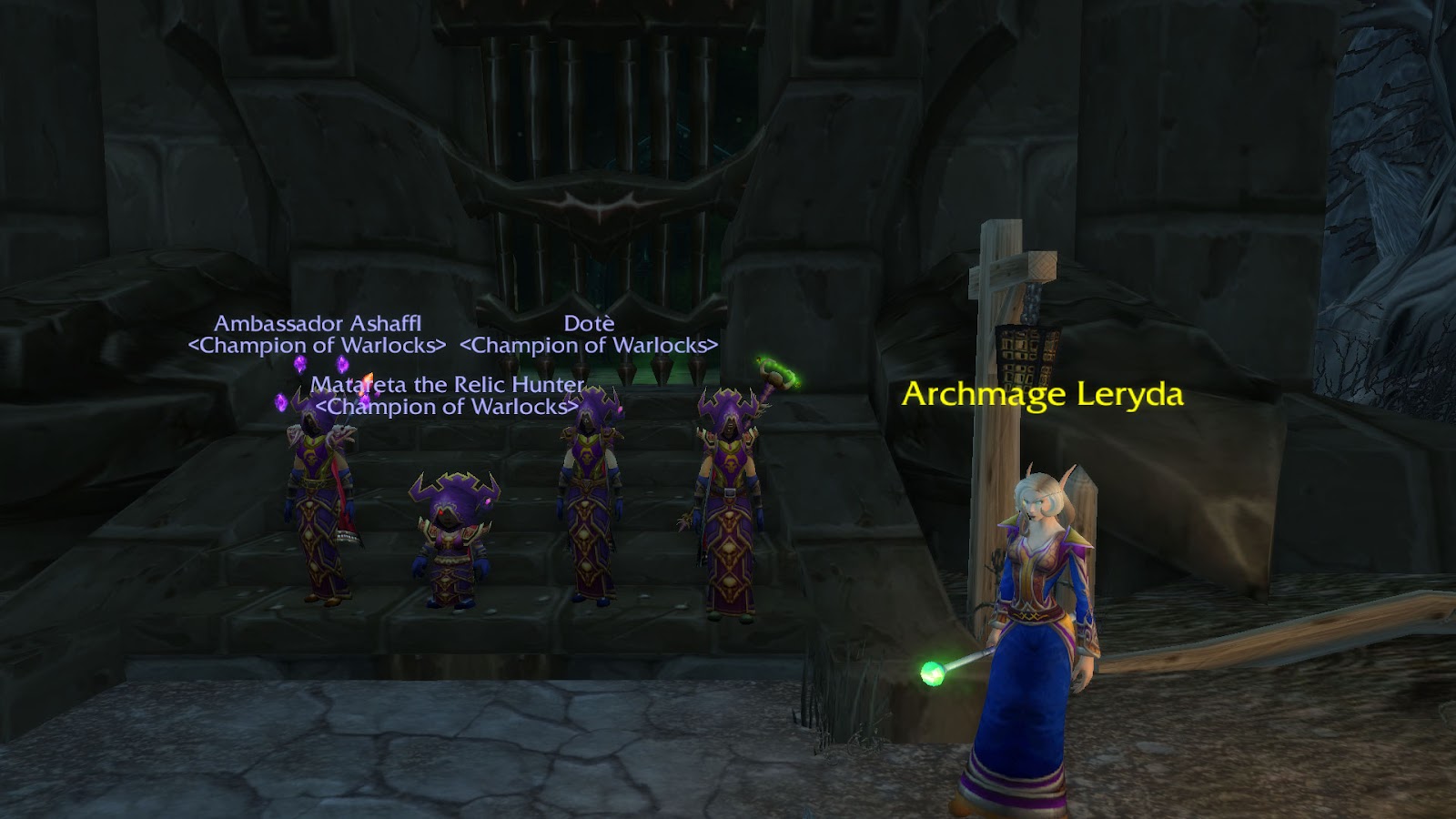 Chilling with the Archmage!
Managed to get the mobs down and made it to Attumen…
Didn’t get him down!
So we went over to Utgarde Keep! 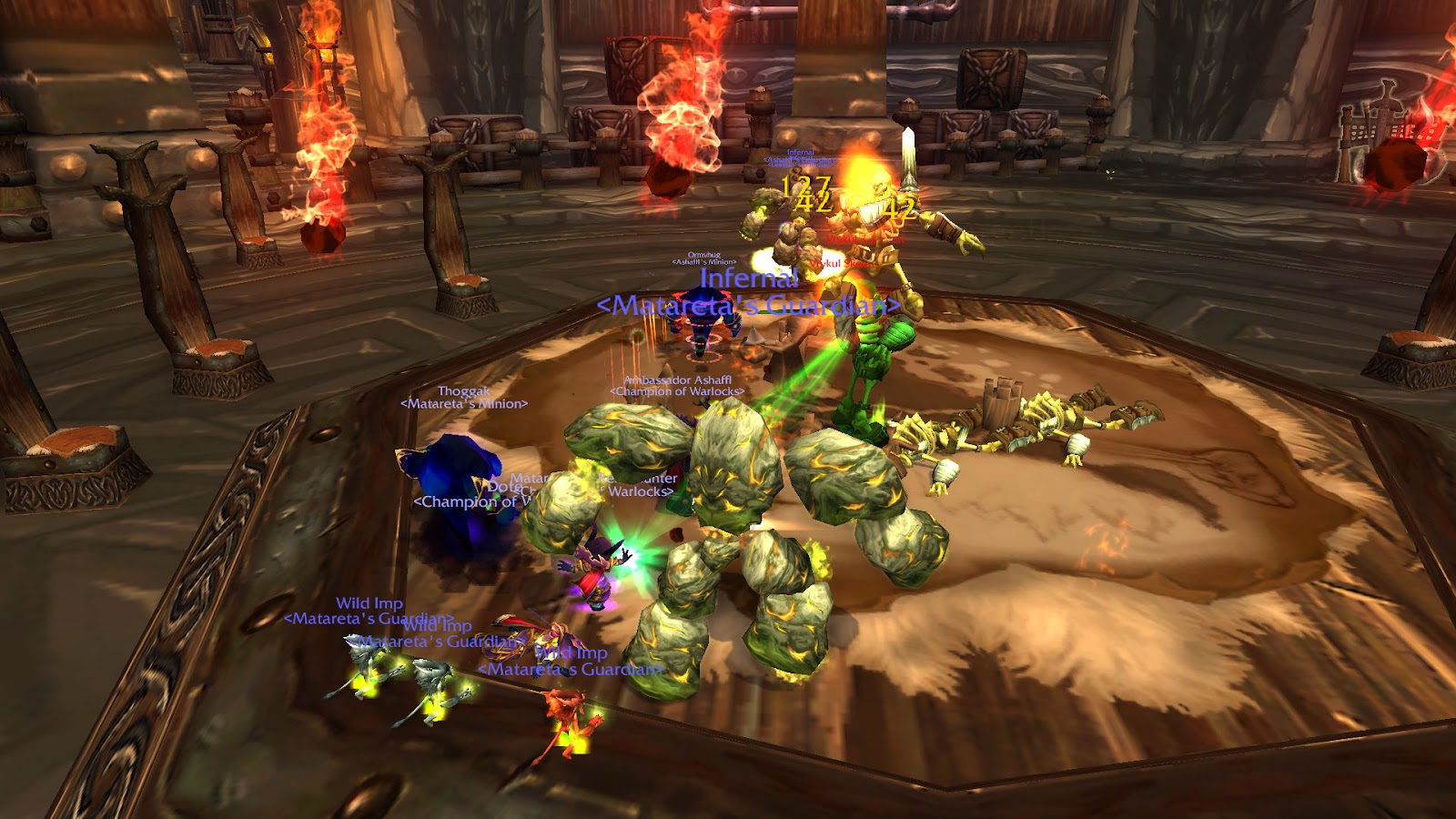 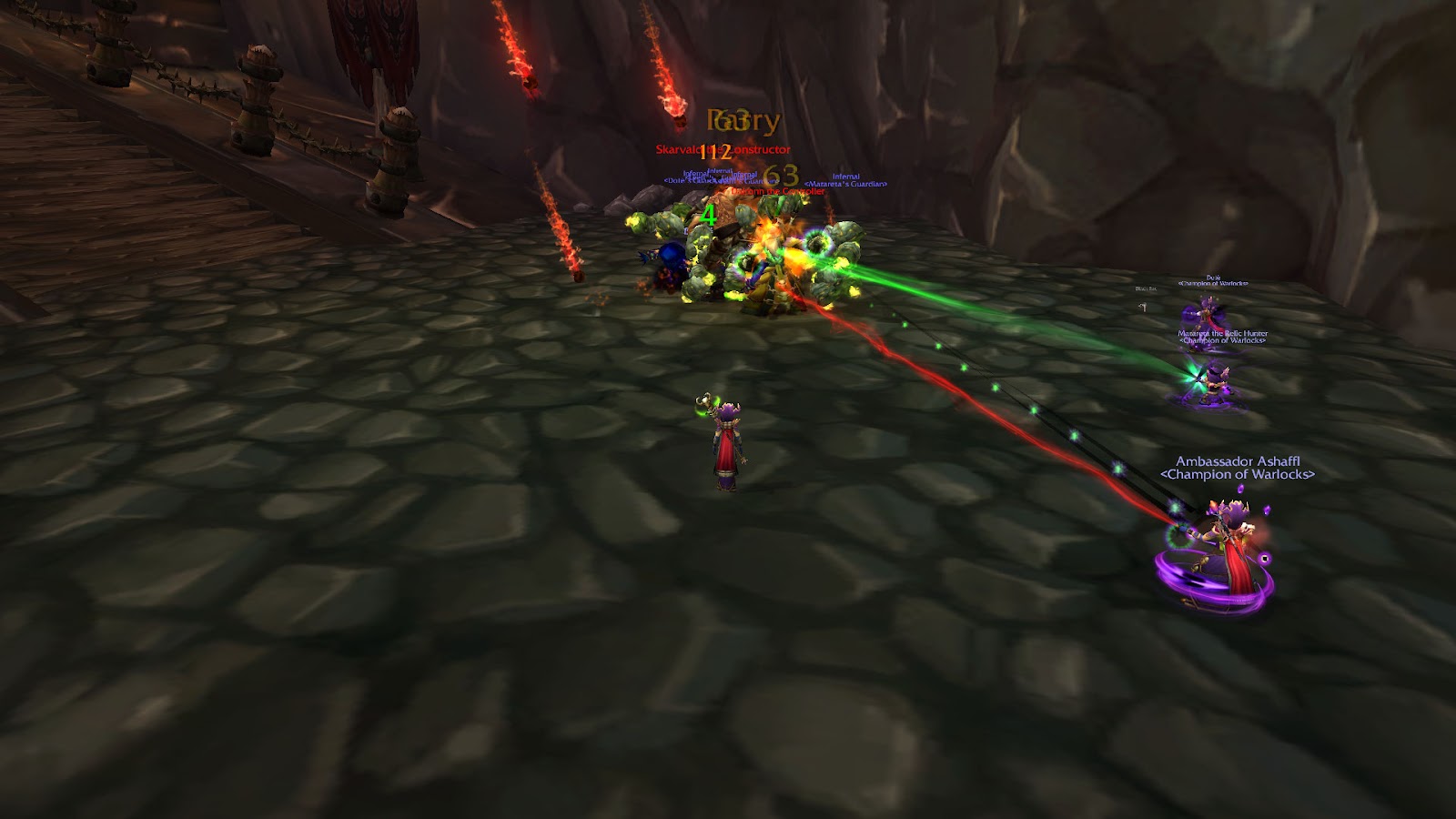 Destruction!
Couldn’t get second boss down!
Looks like we need to be abit higher!

Right after the show last week, this happened: 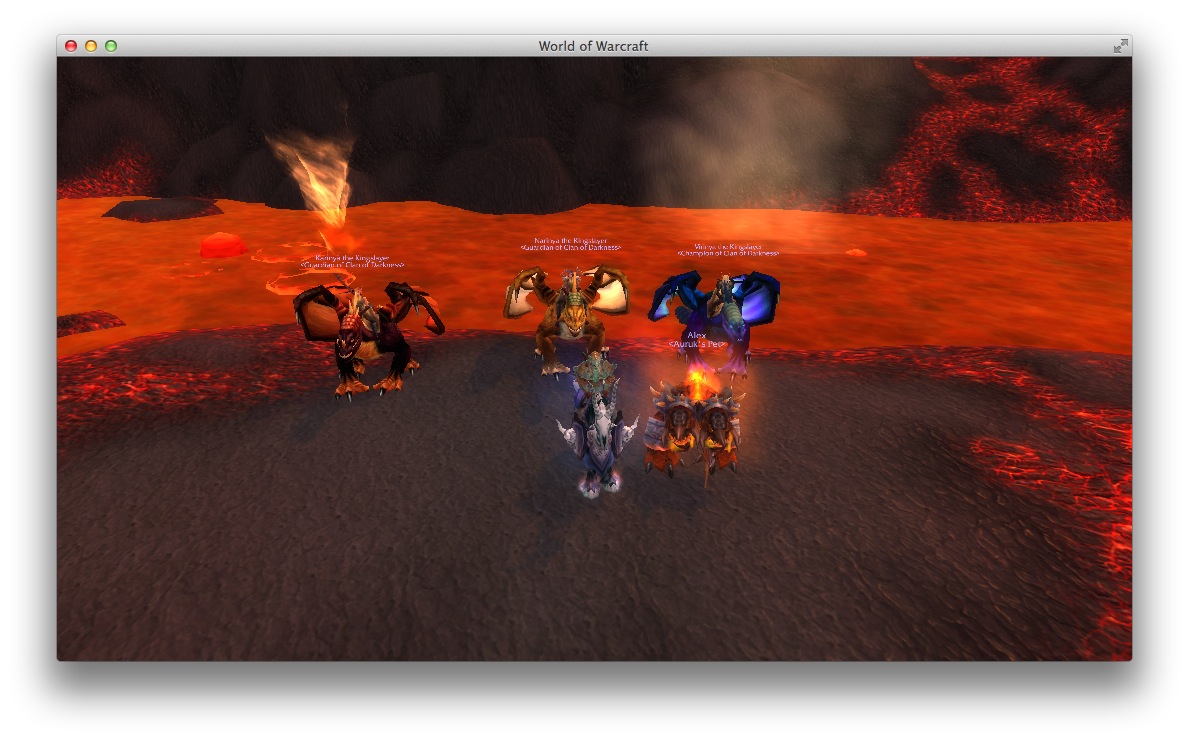 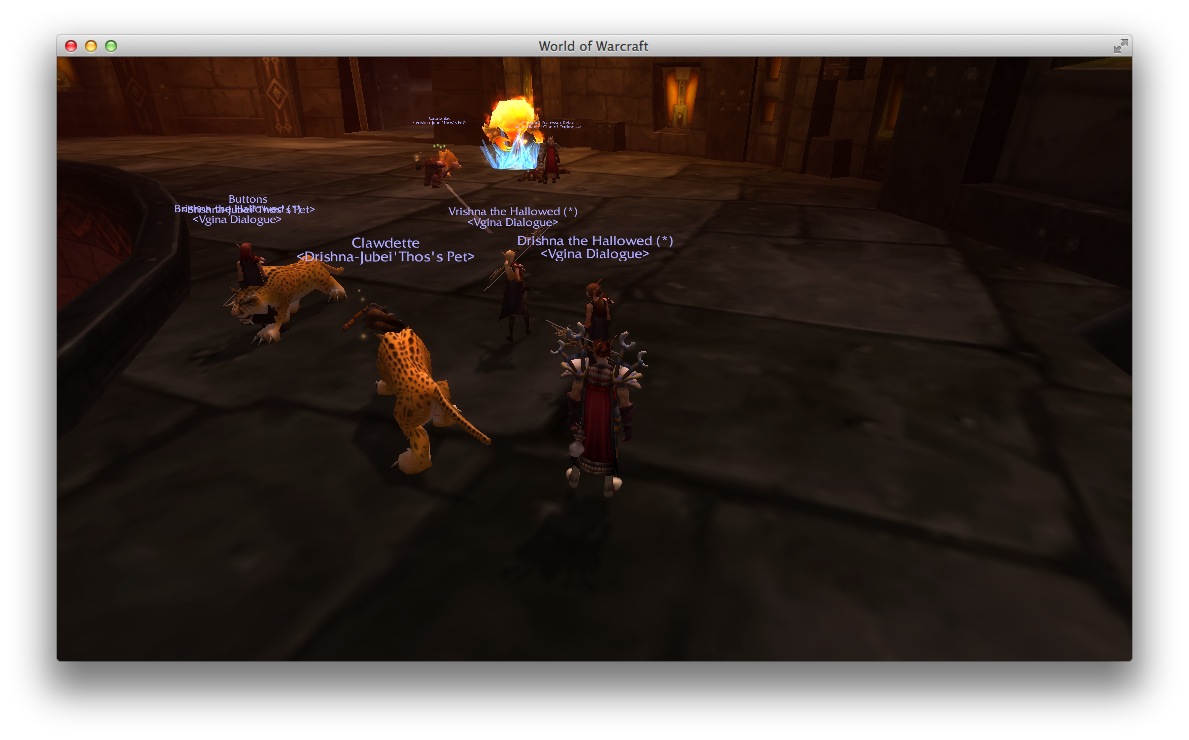 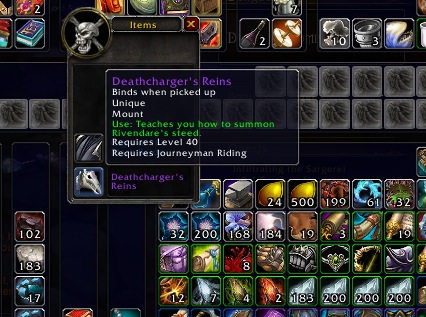 Ok for Iron man on Earthen Ring are you all Horde or alliance? Is Clan of Darkness on this server?
I'll be named Alisaunder and say hello. :)


Someday I'll catch your show live, but I think it records while I'm at work.


Just wanted to say that even tho that wow token addon is a great little addition, there is another way to see the current price without going to the AH.
In game , Just hit ESCAPE key, choose SHOP from the menu and click WOW TOKEN and tada, there is the price!

Goldfinger
Hello Ladies and gentlemen of Clan of Darkness,


Playing on US server from europe is sad when it means that I cannot buy Tokens in game. So, last week I gave in to my lust for gold and reopened my old account. This sounds like a paradox. But, what I wanted was to feel what it is like to open your bag, and find that you suddenly have 120.000 gold. And I did, and I have. It feels soooo good.
When I bought my tokens they were priced at 41.801 gold each on the EU server (Outland). Don`t know if this is like the normal price, of if I just got really, really lucky.


But after the goldrush, the goldhigh, I started thinking. The ability to buy gold really changes the game. It takes away the hard work you have to put in to be able to buy stuff, and this changes how you experience the game. Of course you can say no to Tokens, and not buy them, but if you do buy them, even just to try it out like I did, you may feel a little bit damaged. Because now you have experienced the quick fix, the how to get lots of gold fast fix, and going back to grinding for gold is a little bit....sad...after that.


Guess it`s like if they made it possible to fly in Draenor, yes, you can decide to keep riding and not flying, but looking up and seeing everyone swoosh by you,....it`s not a cool feeling.


So, will I continue buying gold? At least back on the EU server I probably will, because there my gaming will be about pvp and getting the best gear at all lvls, so yes, I will buy and sell Tokens there.


But I will continue playing with you guys on the US server, even though I never will have lots of gold, and my gear always will be so, so.


For the Horde!
Love and kisses from Ravn in Scandinavia


Attached a bit more of an audio for you and far better than last week's. Hope you enjoy it!


For the Horde, For the Alliance
For loving Wow and making many alts!


Rigarmorty
Just a picture of my The Sha'Tar character screen with Eyrdrown highlighted. Below and attached. 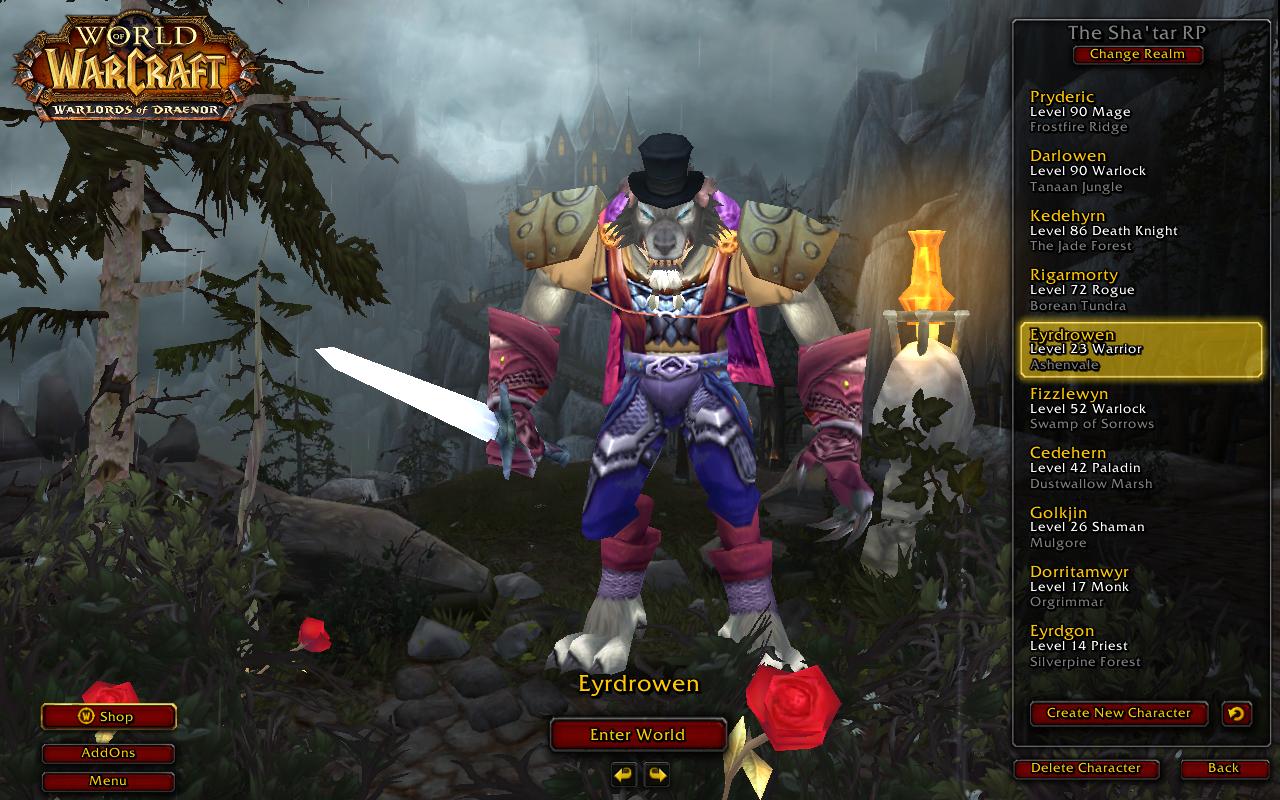 Evil donut from hell
So I was put in a CT scanner today fun fun fun plus grammar is not my friend hence why I use. Wrong and tend to dribble on and not put in. at all the places. should be placed have you not heard me speak am I not a great talker who everyone understands and I bring people to tears daily. Hi patchwork girl good to hear of you in Girls gone WoW. plus went to a friend's going away party to night we were about to leave one bar when security stepped in and asked us all to move on. one of my co workers informed them that his security detail was larger they laughed then went pale as i rose from the group. My coworker stands about just under shoulder height I had at least a head on all the security. On the plus side I was offered work on the way out turns out they were in need of a moveable wall.
Big G


Just a quick update from my week in Wow and Heroes of the Storm ... After a quick e-mail to the show last week I got impatient while I waited for podcast the next day, so I jumped right into Heroes of the Storm determined to make progress in that game even without knowing anything about it except for a few advice from other podcasters.


I levelled to 5 easily while playing the Artificial Intelligence (computer).  The tutorial bugged out on me so I wasn't able to complete any tutorials until level 13. At level 6 I jumped into quick match, which is the most intensive form that you can fight, the matches were very intense, I lost many battles but you still get the same experience ( double XP if you WIN -- even triple XP) and a little bit of gold.  I bought Raynor Hero because I thought he might be easier to play than other heroes.


At level 14 your podcast came out and Marzana explained that it was like levelling to 100 in WoW, I figured I would iron out a few more levels before reset on Tuesday.  I played all night and got to 20 at 10 am the next day. I invested between 25 and 30 hours over 2 days, a lot of player fatigue for the next 5 days. When the game Launched, I remained level 20 for the requirement of Graves Pet.


I don't recommend this approach, but if you want to level in heroes of the storm there is a Buff to experience increasing over the first 4 weeks of the game release on June 2nd.  Also the podcast "The Training Dummies - Episode 97" has an explanation for all the ways to gain experience and what some of the easier characters to play are.


I logged into the game on Wednesday and I was informed to open the launcher for heroes, when I did so 5 prizes appeared in the main menu, I collected Graves pet, a Hearthstone Cardback, a Heroes of the Storm mount and 2 other prizes I cant remember.  Graves pet looks amazing and is crazy good for the pet menagerie dailies, even if I have the wrong pets when I zone into the battle, Graves just murders all the pets with little effort.  I looked up Graves on warcraftpets.com and it shows that only 0.2% of players have him at the moment.


If you don't like multiplayer you can just play the AI, it takes longer, you don't get gold, but you do learn to play all the different maps and how to make progress quickly.


I got another Weebomination from pet menagerie on Tuesday :) fun stuff.


Thanks for the awesome show


Setnuh's week
Hello ctrl alt wow folks. Setnuh here and I just wanted to share with all of you wonderful people my week in WoW. I did my typical leveling of Setnuh my shaman in CoD but I tried to do more with pet battling and collecting this week. As far as collecting goes, I didn't have much luck for most of the week. I looked for world drops I hadn't found yet and discovered there was two Rares in dread wastes that dropped pets that I didn't have. This was very surprising to me because I spent a ton of time during Mists in these areas, Since the Klaxxi is my favorite faction to quest with. I set 3 characters all on different servers camping these rares and would check in on them from time to time killing them as much as possible. After many attempts Karr the Darkener dropped his Pet Grinder.
Then one evening I was talking to Grellic and he asked if I had gotten a wiggling egg from Frostfire Ridge. He told me where to find it, which I did and three days later I received a Fruit Hunter. So Thank you Grellic

Last night I decided to Try and finish getting to level 100 but first I checked in on the rare I was camping Nalash Verdantis. He was there for two of my characters and the second time he finally dropped the Aqua Strider. I then jumped on Setnuh to level and NPC_Scanner went off. It was Luk'hok the lvl100 elite meadowstomper. I didn't know if I could take him myself but figured might as well try. Someone was fighting him already with not much success. I joined in and between the two of us we took him down. I was pleasantly surprised when he dropped the mount Mottled Meadowstomper.
Not twenty minutes later I dinged 100! I hope everyone had a great week and I hope you all have a great show. I am very sorry to say I will not be in the chat room tonight. I was looking forward to the guest and to continue with the live ironman challenge. Take care with those iron man toons and DONT DIE! 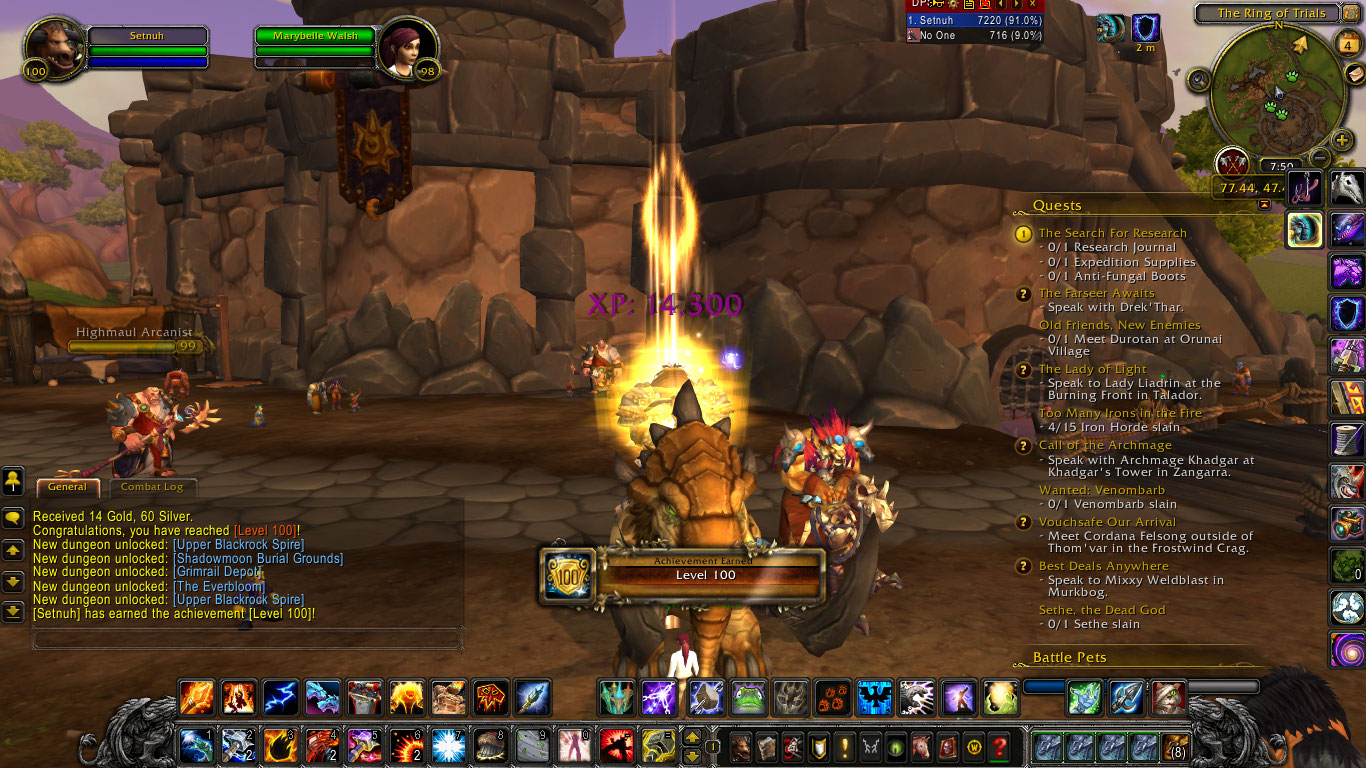 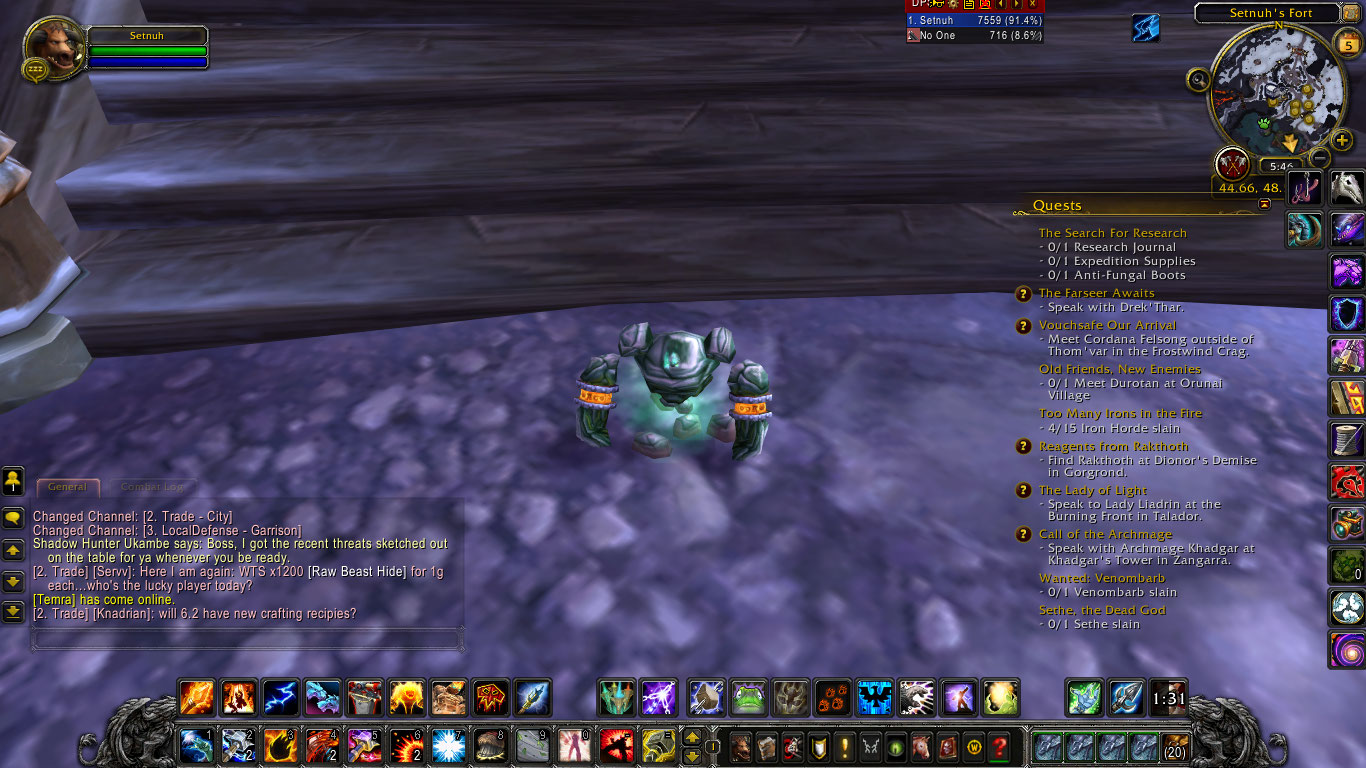 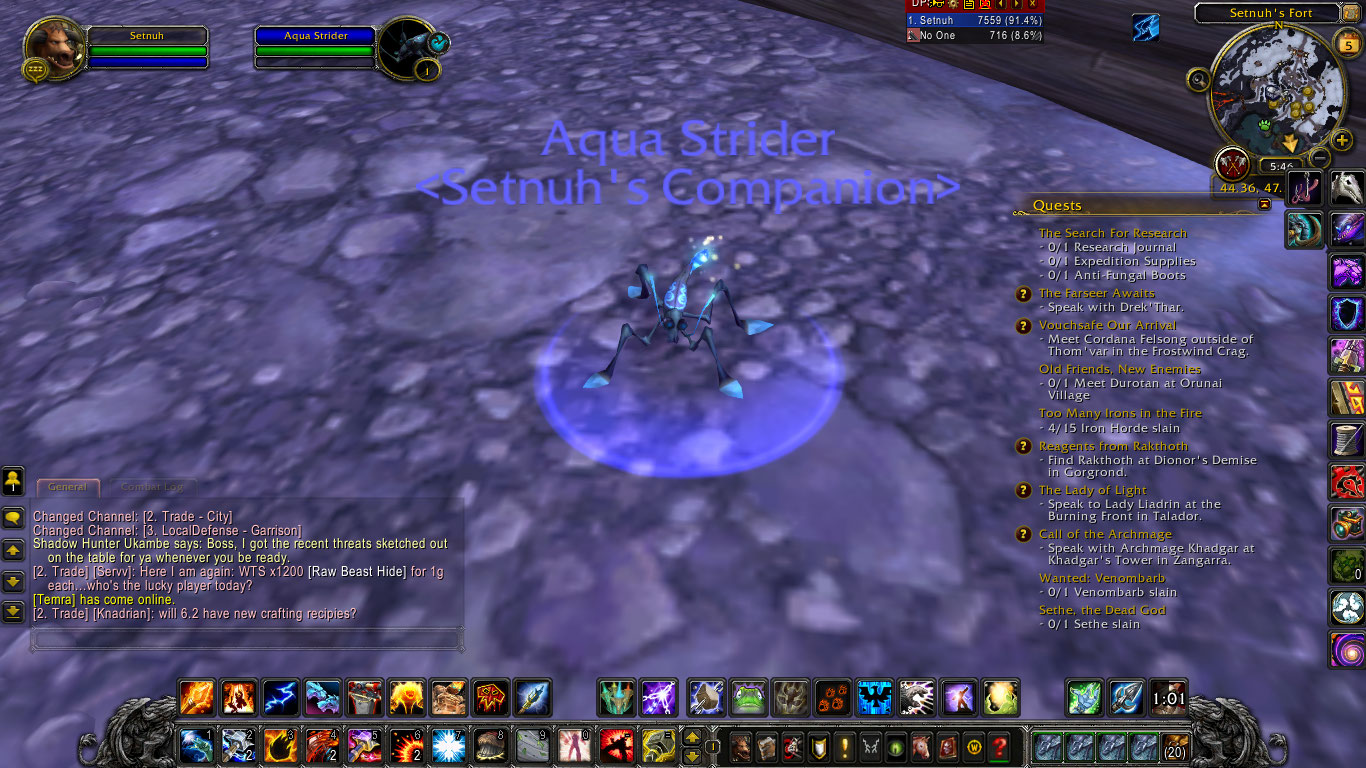 
Time Flies When You’re Having Fun:
- 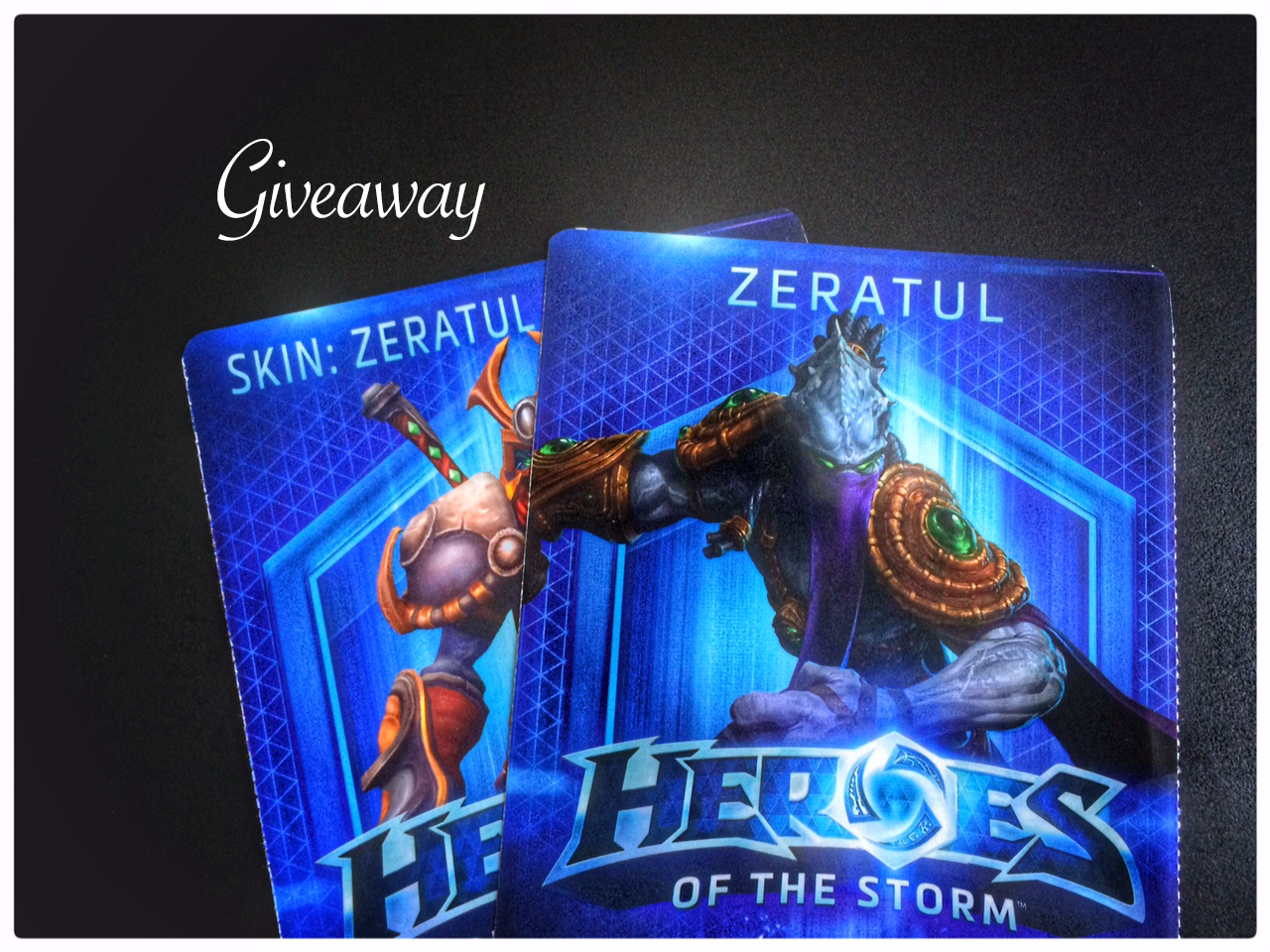