Hiya Aprillian, Leeta, Rougeslayer, Tedra and of course our awesome wow family.
Hope everyone is kicking butt on and off the game :)
Sorry haven't really done much in the game this week, and when I was on just catching up with everyone. Which I love doing! Didn't join in on the raid Friday night but did join in on mumble and chatted for a bit. Made my day a lot nicer then it had been, yep it was a rough couple of day's but better now. And as I was on the game saw Ach. flying around like crazy it was awesome! they were coming so fast that by the time I got one grats out there was another grats due. That is one thing that always make me smile, knowing all of you are having fun, I love it. But today I did group with Mstake and our new guild member Gorluk and had some fun on the Timeless isles. So if you see him on the game say hi, I think he is going to be a good fit :)
I've been a little worried for the past month and haven't said anything, but now that the scare seems to be over. One of the test I had showed a lump so a second test was needed, and yes it's a lump but they think it's not cancer Woot! So for now I've got to go back every so often and they'll check again, make sure it's not changed any. Good news for me! Guess my point is if you haven't been like me to see a doctor in years, really you should just you know to be on the safe side. And I got that news today :)
Anyway Aprillian I love the pictures, you really look happy and that pup is a sweetie. I'm happy that you have her we need our furry babies they make us happy!

Love & Kisses
Pixie & Junno
For the horde & Clan of Darkness
PS Junno sends her love and she is playing the alpha part of Warlords of Draenor, but she said it's really buggy!

1/ Leeta
a/ Timeless Isle
Had a more successful week this week! :)
Forager’s Gloves dropped from a Burning Berserker! Which is awesome coz Leeta is totally NOT a gatherer! lol
http://www.wowhead.com/item=86566 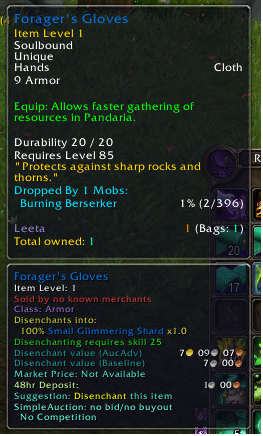 Also got myself a Jademist Dancer!
http://www.wowhead.com/item=104164 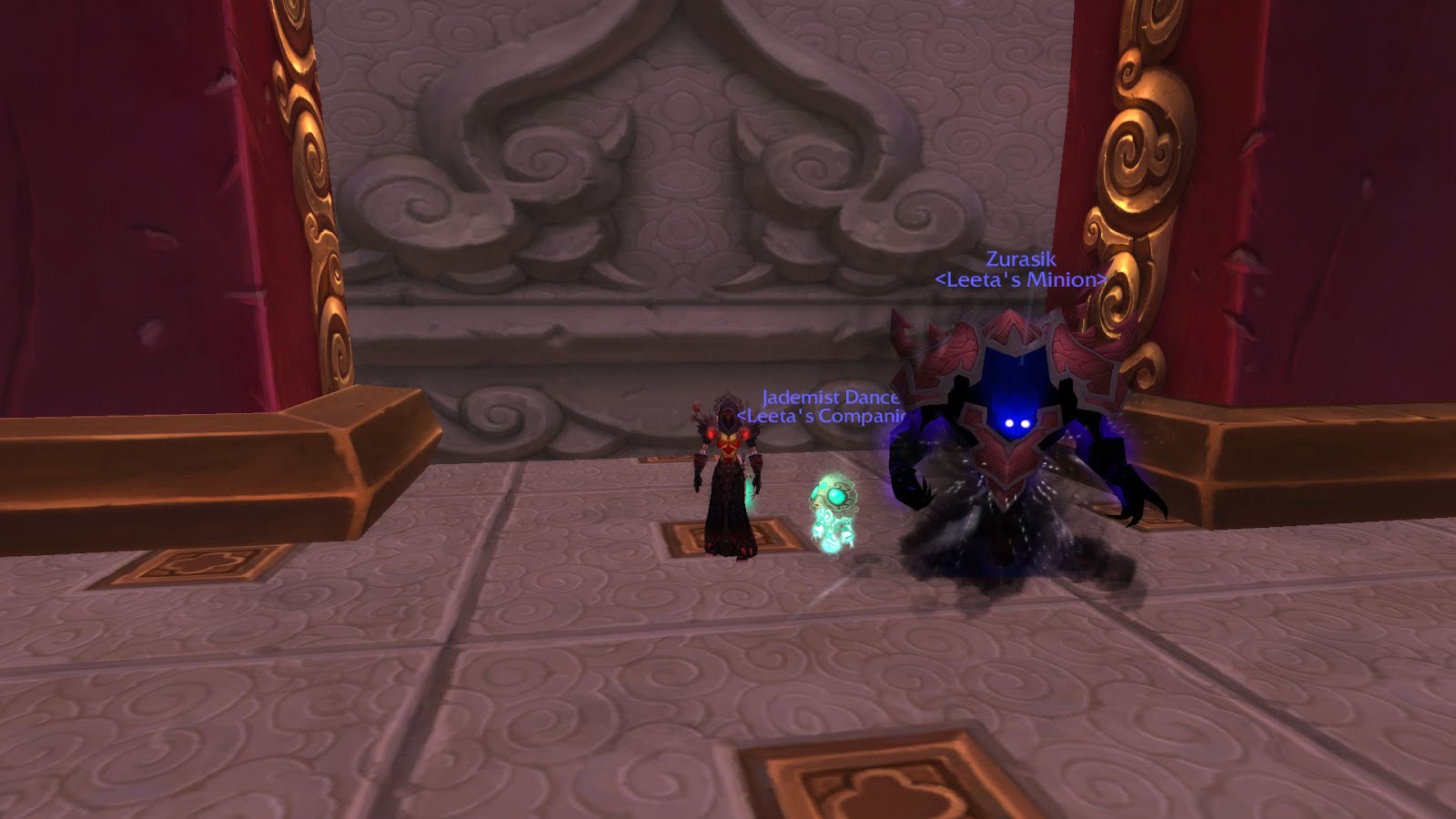 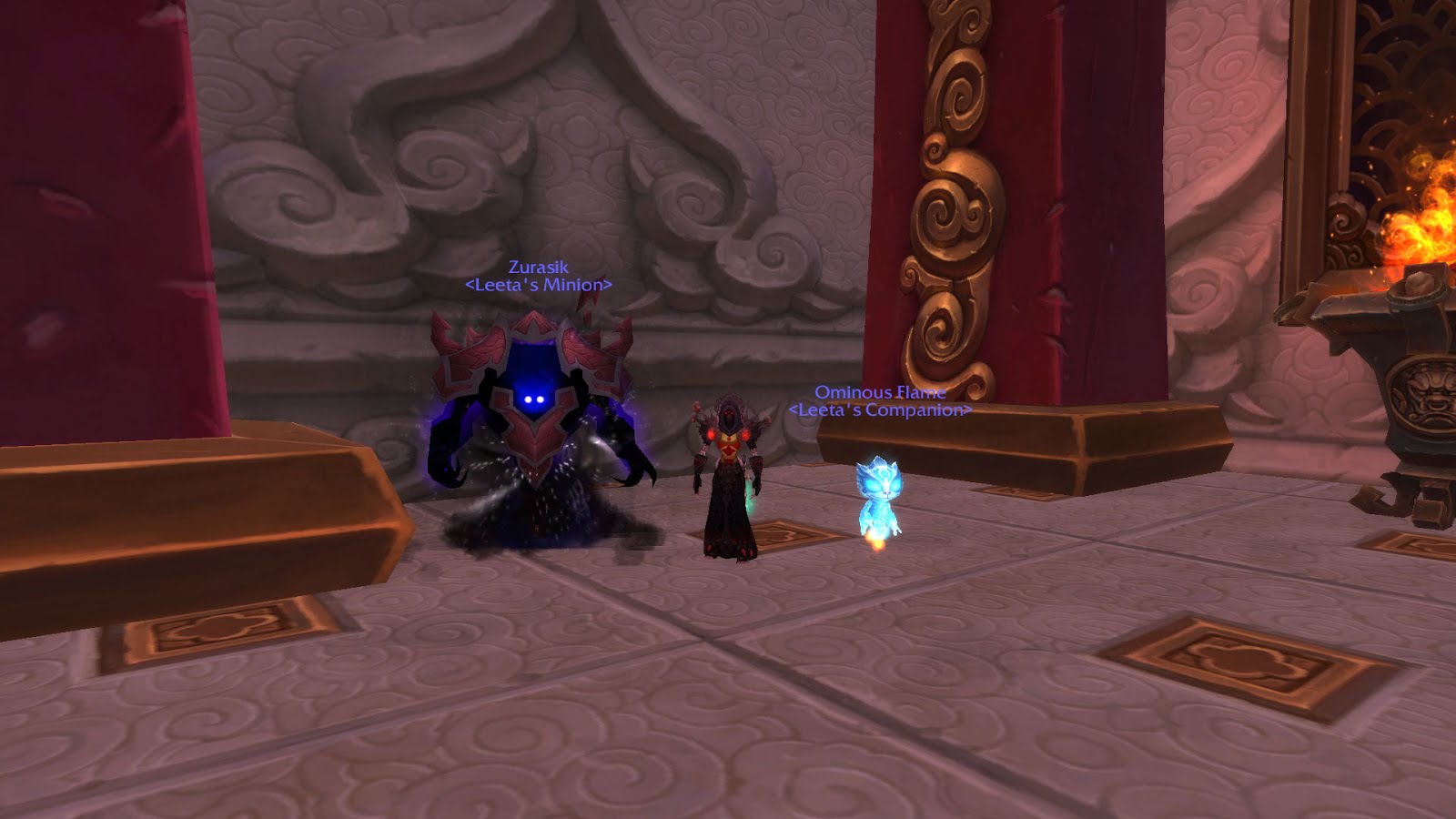 b/ Did ICC 10man Heroic and got a few achievements and also the title Bane of the Fallen King!

http://www.wowhead.com/achievement=4583
Was great fun and grats to all!
This picture is of both Lokwyn and Wansu being alive while the rest of us are dead AND since we killed him too fast we did not get our rez so I am calling it “Bane of the Dead Squishies” :D 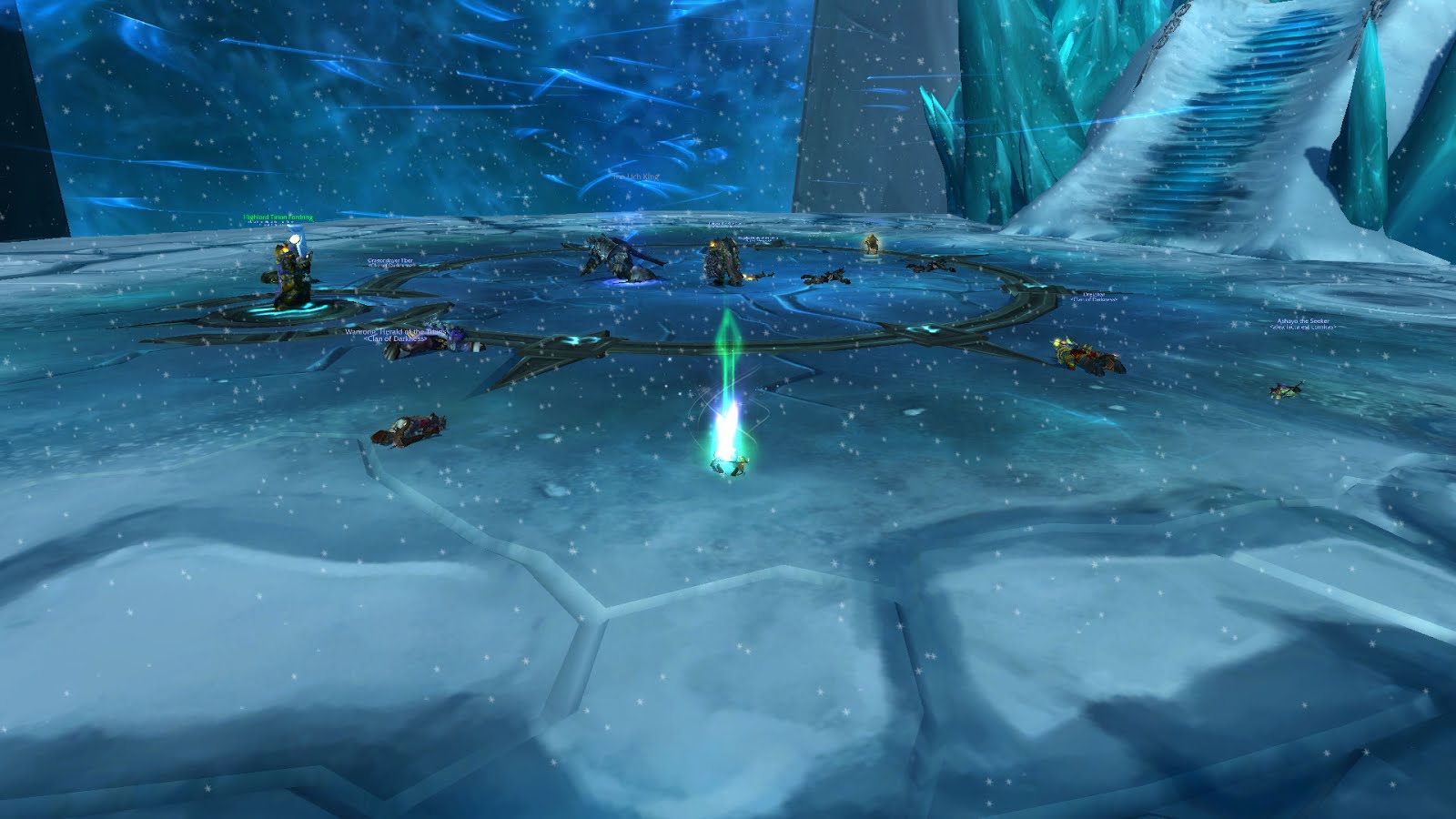 c/ Ebonlocke - Warlock Green Fire Quest of doom!!
Had another 18 goes at it yesterday… best I got him to was when the Fel Puppies came out around 65%!
Just struggling to get the “dance” right!
2/ TNAK - Mage Lvl89
We decided that we would do some questing as levelling in dungeons is taking alot longer so we hit up KunLai Summit on Mata’s cool looking Steed!
Warforged Nightmare https://us.battle.net/shop/en/product/world-of-warcraft-warforged-nightmare 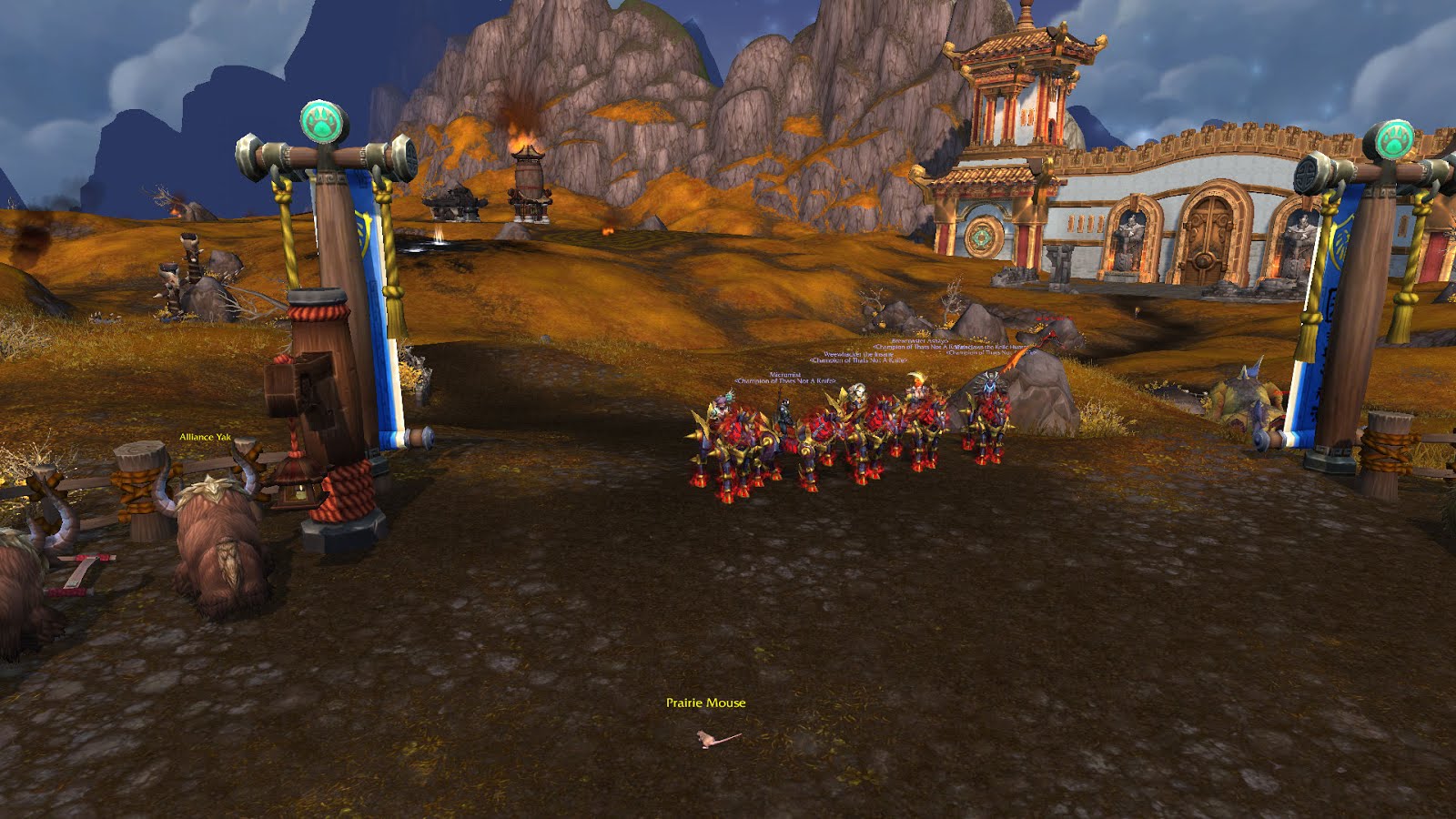 3/ Herald of the Titans - Druid
We stroll into Ulduar ready to take on the big man himself… Algalon! 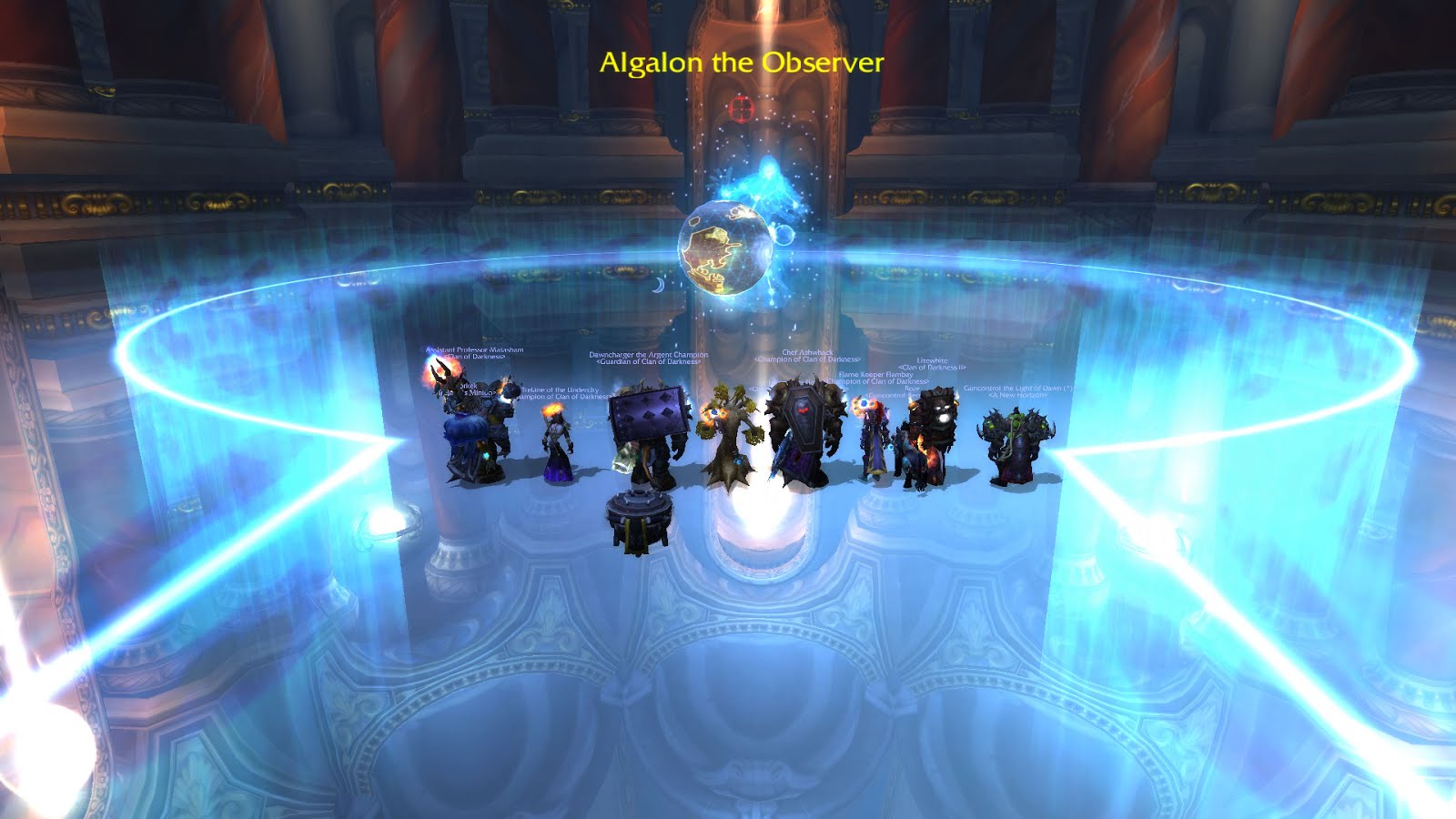 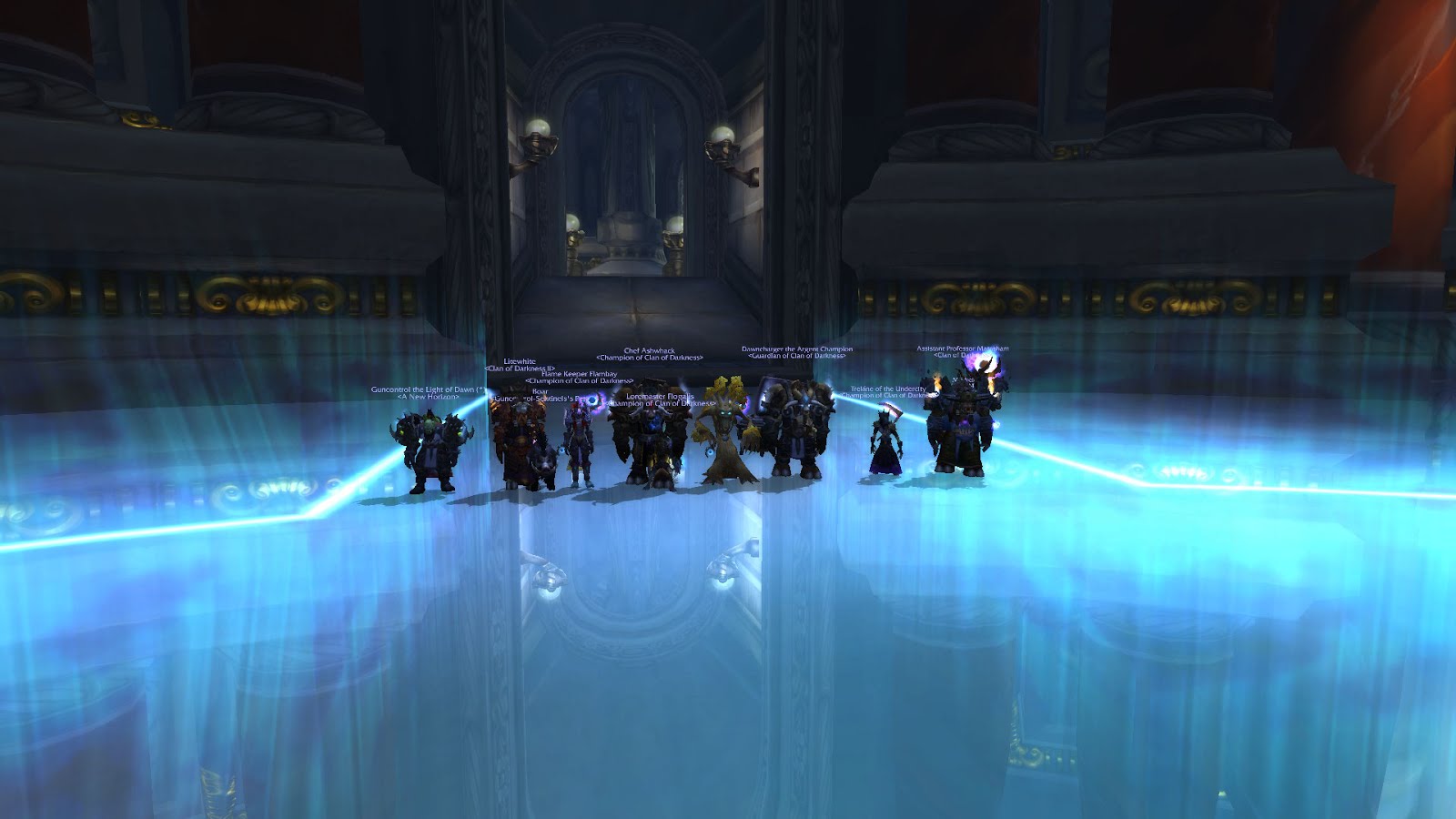 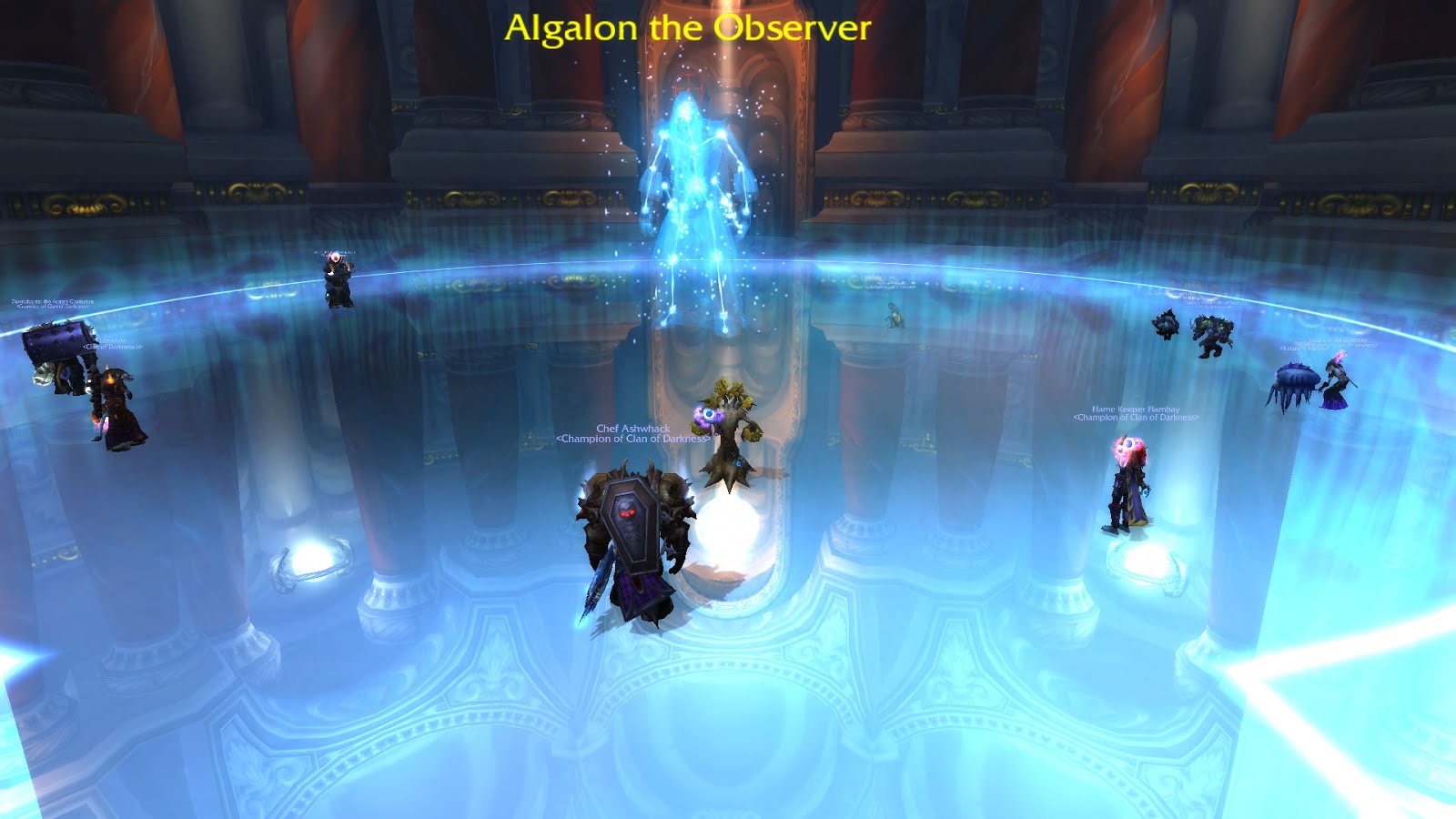 And on the 2nd attempt we did… 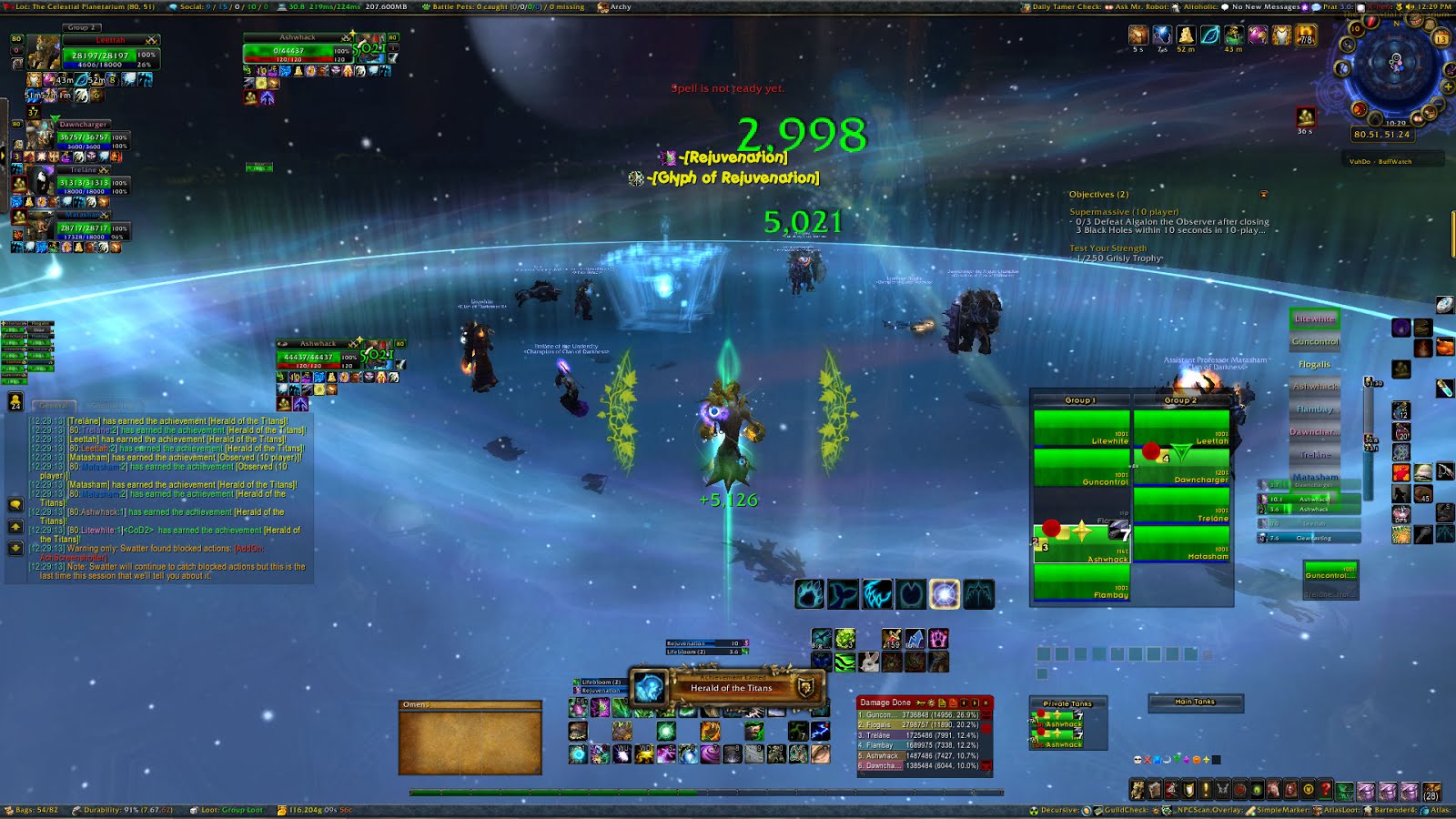 Huge grats to all - Wingy, Ashayo, Mata, Tiber, Cloggie, Dawnchaser and Grand Nagus!
Special thank you to Guncontrol who came to help us with his twinked out Hunter!
He was doing nearly 15k DPS! Amazing!
Oh did I mention… we 9 manned it! :D
I want to also say a huge thank you to the Clan of Darkness guild for helping us along the way with runs through dungeons and raids to get us gear, for those who contributed with mats for gems, potions, enchants etc! Your help has been invaluable :D so thank you!
To all those that missed the HoT run we will be doing this again as we want to make sure everyone who has taken part gets the achievement!
My Herald of the Titan ;) 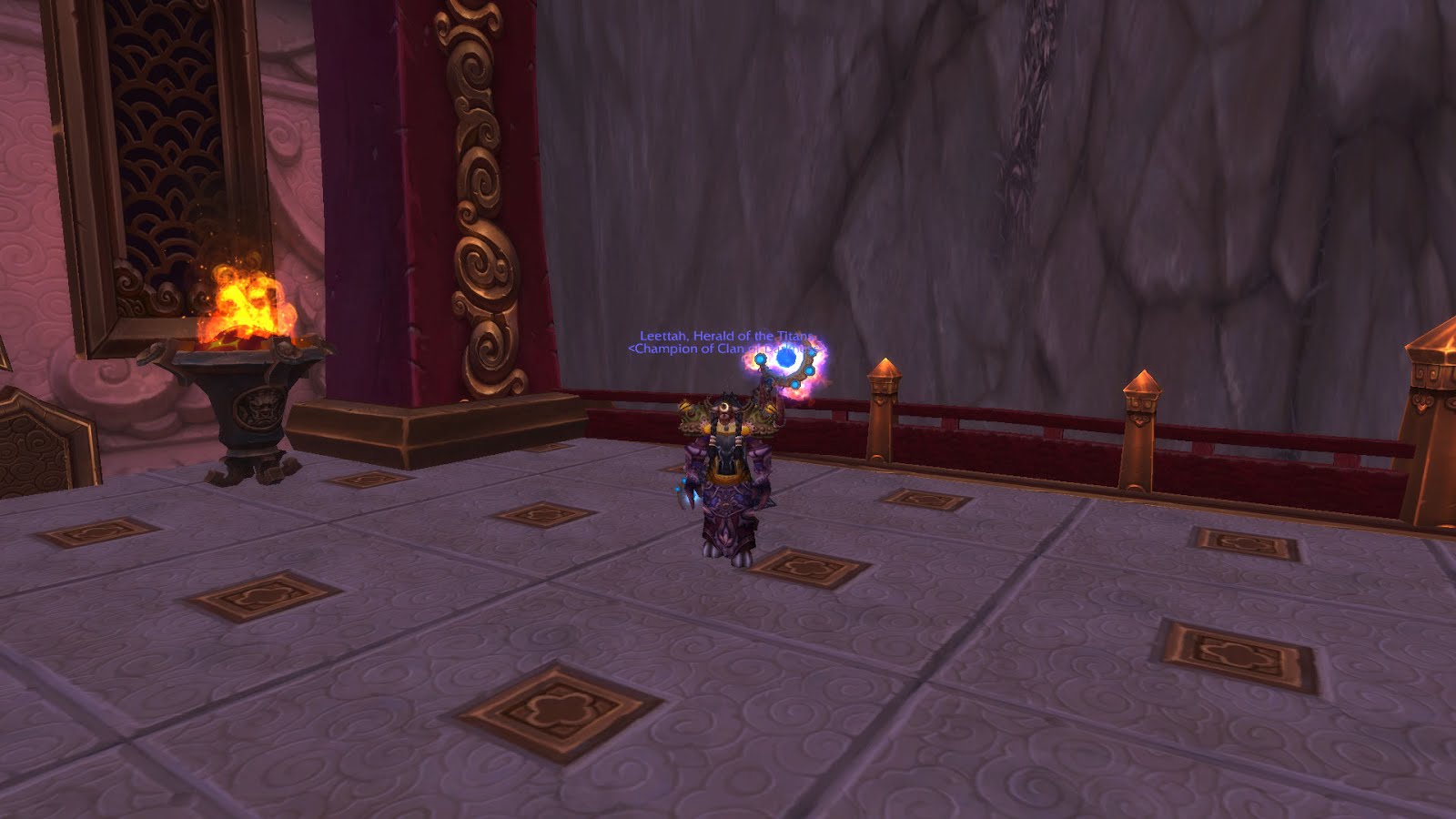 Forgot last week - After an update, my graphics (especially starter screen) were amped way up!
Warforged nightmare - everyone hopped on at Eye of the Storm!
23232 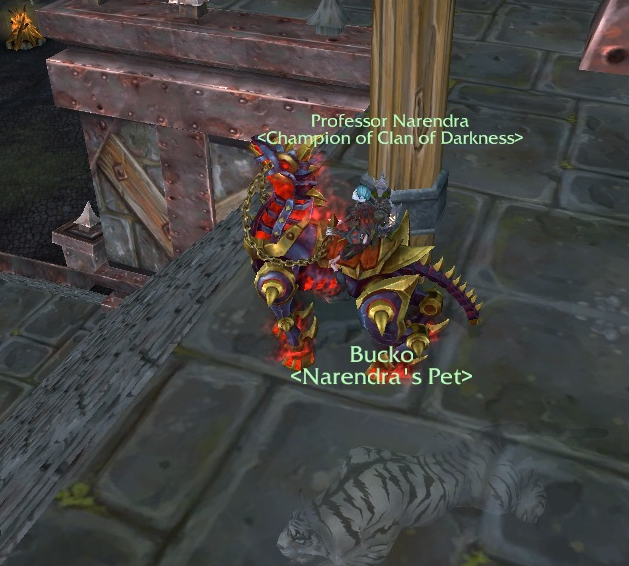 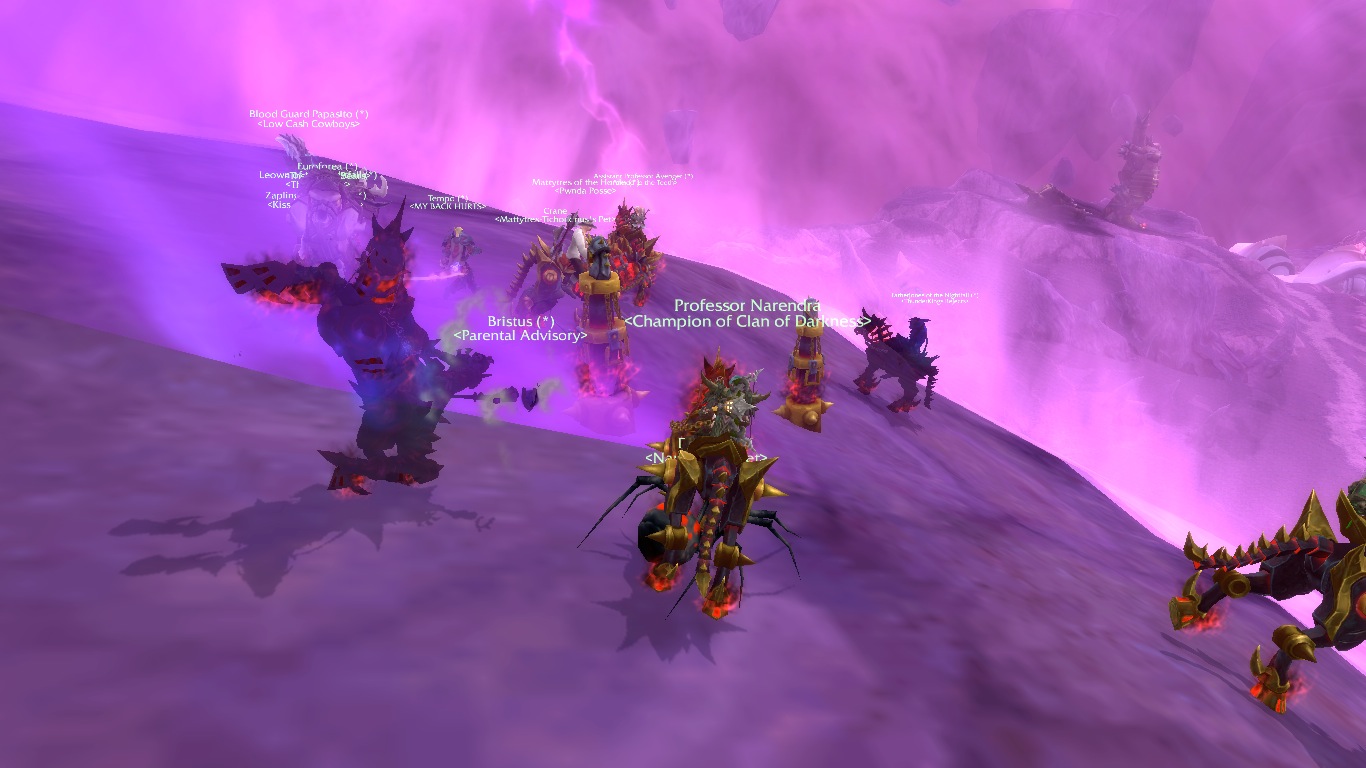 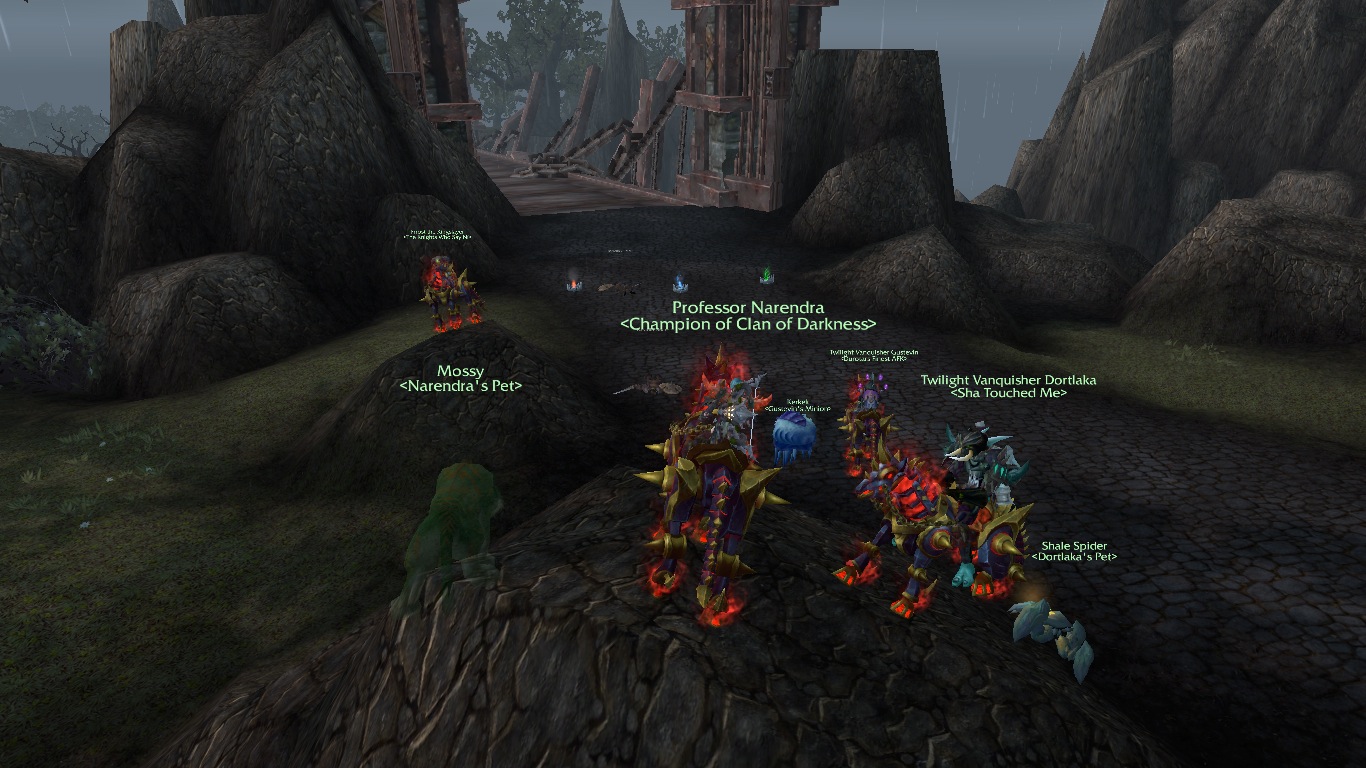 requesting a clan of darkness invite.Hello

I'm a long time listener, and your show has got me to re-up my sub.
I was hoping to join your earthen ring guild, COD.
I started a new toon named kenie on the server.
When i has some more cash, my other toons will join him.

If you would like more info about me or my toons.
don't hesitate to ask.


Wow talk
I absolutely love wow. everything about it. the graphics the raids...not so much LFR trolls..but the teamwork aspect. i mainly tank. thats my prefered role. dps and heal are boring to me.

im 28, male, 6'1 and been gaming since i was a wee little lad. i met two amazing people Mstake and phenelope. Pixie sent me so im interested in being a member. :-D

have a great day!
Lorne


Greetings Aprllian, Leeta, Rogueslayer, and Tedrah
I hope all of you are happy, and well in, and out of game.

I am doing pretty well myself, maybe working a little more than I'd like, but there are far worse problems to have.  I was present for this weeks Herald of the Titans achievement, and that was a lot of fun.  The fun of it, wasn't just the boss kill, but the whole process leading up to it.  All the teamwork involved in gearing up the group, and the trial runs on the encounter were pretty neat.  I've never been a raider, so watching how Wingy, and the other leaders managed the team, and learned from the set-backs, to make each attempt better, was really interesting for me.  I'm sorry some of our regular team members couldn't make the run last Friday.  My mage Flambay will remain at 80, and in Herald gear to help future attempts at the achievement.  A hunter from the Sentinals server named Guncontrol came along on the run, and even with him we only had 9 for the attempt.  I felt we were ready for Algolon this week, but I would not have expected us to 9-man him.  I think Guncontrol's amazing DPS probably made all the difference.

During the practice runs for the Herald achievement, I wasn't really too happy with the way my monk Tirisfel was working out.  I'm not sure the whole melee-DPS thing is a good fit for me.  So I crash leveled my fire mage Flambay through Darkmoon faire week, so that she could gear up, and be ready for this week.  All that leveling got me 2nd place in guild activity, and when I checked my mail after last show I found a Panderian Water Spirit pet from Voltandra.  Thanks so much!  The Water Spirit is a really cool pet, and I have no other like it.  Which reminds me, I need to find some time to level up my pet battle team...  (so much game, so little time...)

If you play many Alts, on many servers like I do, you are probably loving the change that lets us send account-bound items across server, and across faction.  What you may not have noticed is that the Illustrious, and Renowned guild tabards that we can buy from the guild vendor have a decent vendor price, and are account bound.  The Illustrious costs 112, and vendors for 31 gold.  The Renowned costs 225, and vendors for 62 gold.  Nobody's going to move major amounts of gold this way, but if you're starting out fresh on a new server 31 gold goes a long way to buy a few bags, and pay for flightpaths.

Thanks for all the fun guys, I'll see you in game!
For the Heralds,
Tiber


achievements abundant
Hello Aprillian, Leeta, Rogueslayer and Tedrah,
I’ve been busy in game with my legendary cloak goal. My priest Tennish has now 38% of the quest chain completed and my alliance rogue Cloggie has completed 31%. I haven’t progressed any further with my other 6 level 90s, they’re all pretty much 2 quests in.
My rogue Clogalis manged to find himself a pick up group for Normal Siege of Orgrimmar the other night. We completed the first 2 wings, so up to General Nazgrim before the group fell apart. It wasn’t a bad run, I won one upgrade too.
After our awesome achievement in Ulduar which I’m sure you’ve all heard about by now, I decided to complete some other achievements. So I had a look in my achievement log and found Glory of the Raider (10 Player) was almost complete. It required only 3 more achievements. So I headed to Nax and solo’d the last 2 required in there, and then went off to Malygos and killed him too. To my surprise later that day, I was cleaning out my bags and found I had a Blue Riding Drake. It dropped in Malygos and I must have missed it. I aslo found a Direhorn Runt pet that was eagerly waiting to be added to my collection.
Leeta has given me an idea, I am going to leave my HotT rogue locked at 80 and twink him out with the best gear I can find for a dps challenge. This may or may not require unfreezing some of my other accounts to give him some gear runs J
Take care and talk to you soon.
Cloggie
Hi,
A quick update on achievements … hope its in time to add it to my previous email.
While in the Temple of Kotmogu battleground for the pvp quest in the Legendary Cloak quest chain, my priest Tennish helped Clan of Darkness II earn the achievement Human Slayer (get an honorable kill on a level 85 or greater Human on each class listed below).
Tennish also earnt the achievement I’ve Got The Power – Win a battle of the Temple of Kotmogu while your team controls all 4 orbs.
Toodles!
Cloggie 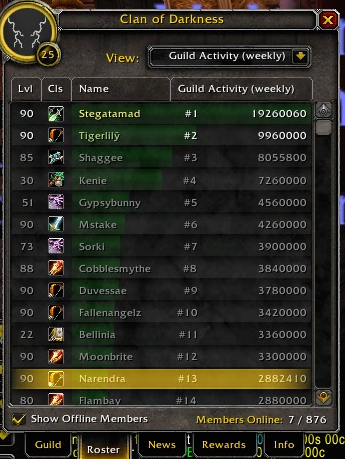 Posted by Aprillian at 5:06 PM