Got Prillian to 85, we just need a Troll Monk. I’m focusing on Deepril now, she’s my Orc Rogue.

Where you accept making home is where you zone in. I hate zoning in on the steps at Lazy Turnip.

Anonymous donor - Nice, feel a little guilty but I didn’t want to lie.

Understand about getting one team to 25 to catch higher

Someone stole my pet
she whispered me back Spawn of Onyxia has been added to my pet journal, get over it
I told her I'm glad I'm not like her, we are on the same side 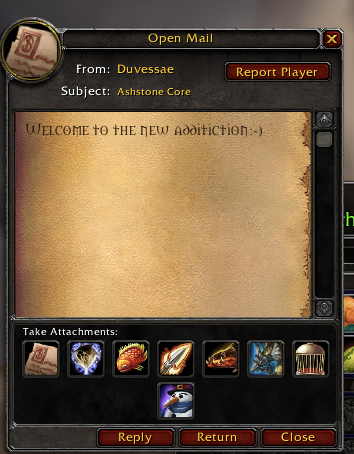 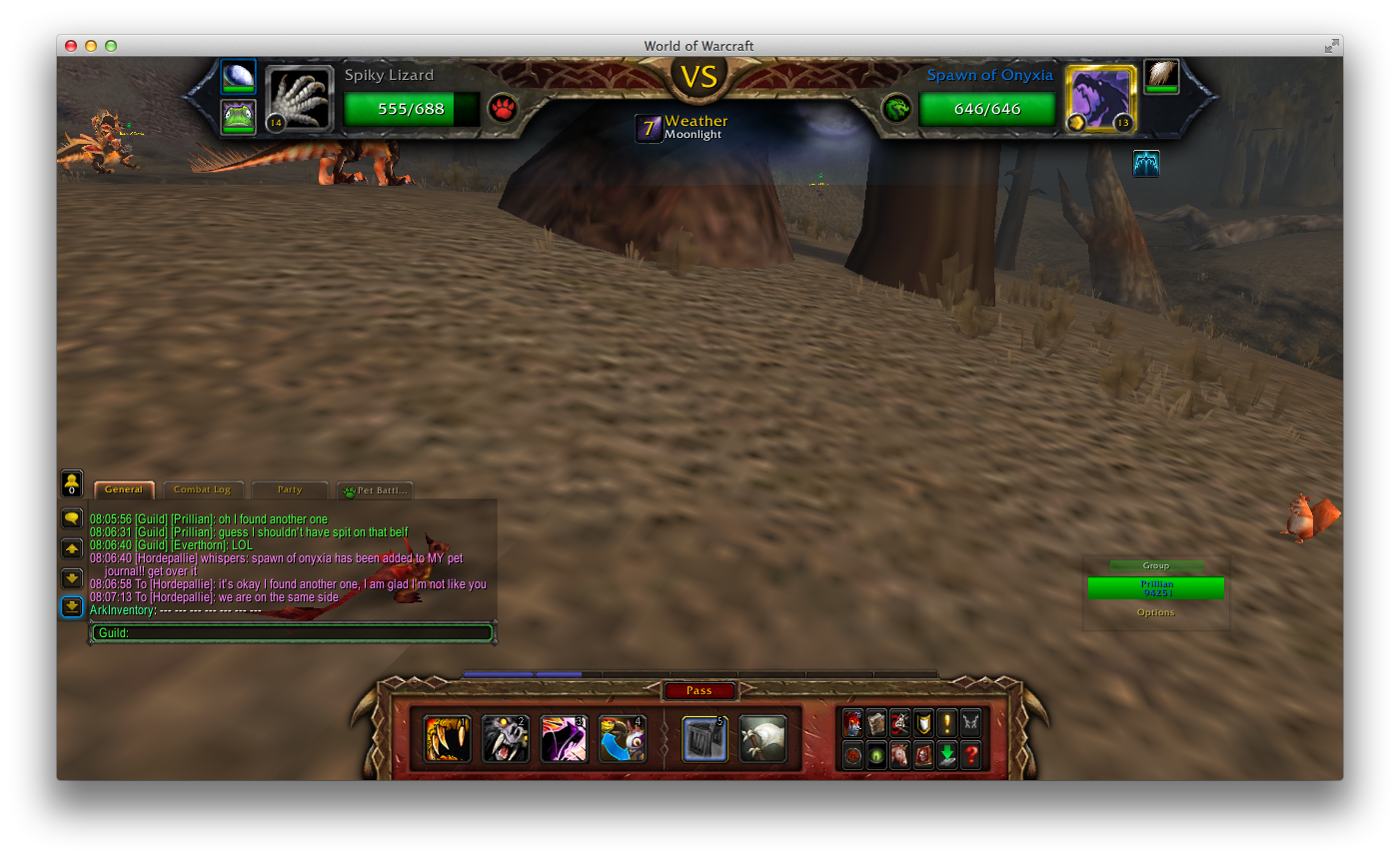 This is Painfulness, 90 warlock on Saurfang. I have been listening to your show for a few months now and I must say it is very entertaining. It is really different from other shows because most of them focus on end game but here we get a little bit of everything and everyone is an altoholic. I remember around the first few times I listened, Aprilian was talking about her runs in Wailing Caverns and I really enjoyed the parts of leveling with Shemaya (sorry not sure about the spelling).
I am a bit of altoholic myself, with 4 characters at 90, 2 86 one 84 and the rest are kinda low. Listening to your show really made me want to join your guild and I took advantage of the character transfer sale last week to transfer my hunter Barcahamil to Earthen Ring in the hopes of joining all of you.

Keep up your wonderful show and I look forward to seeing you in game.


Hope this finds you all well.
I know, I don't call... I don't write... What kind of kid am I?? Well, things have been pretty crazy around here the last couple of weeks - I hope you'll forgive me. *smile*
Here's a couple of pictures to go along with my audio - and an audio!
~Maggrathea 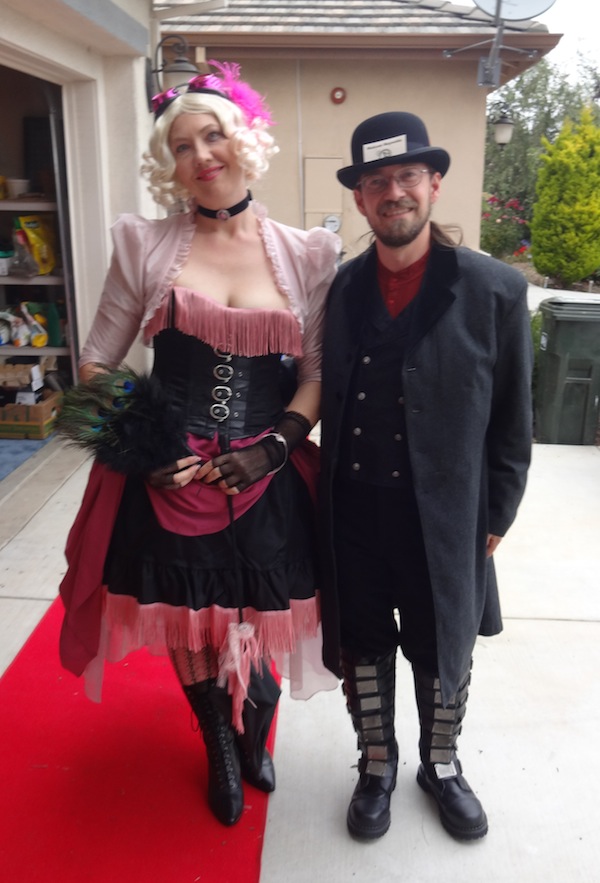 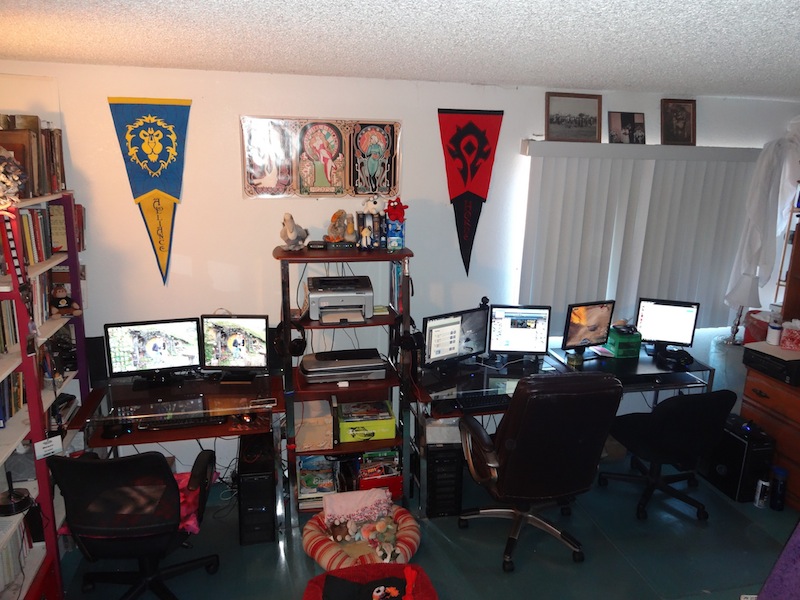 PS - just logged off from doing the "Friday night" thing with Juuno & PixieGirl - SO. MUCH. FUN!  We had a small group, just eight of us, but it was a good time and a ton of laughs. Thanks everyone for the enjoyable evening!

Greeting to the CAW crew,

I was able to join in the Friday night group this week, as I was on day shift for training all week.  I had a blast talking with everybody, mostly listening though, as my headphones went out halfway through, and my backup headset did not have a working microphone.  I still got to hear everybody though, and had a great time.  I was the winner of the Twilight Drake this week.  And after the sign off of the group, I was the 3rd hunter to win the Tome of Dinomancy that night.  I was so happy to be able to join in with everybody, unfortunately it will not be able to happen regularly, as I work on Friday nights.  Many thanks to Pixie & Juuno, and the whole group.

Sorry for the lateness of my audio this week had to work extra hours at work as someone called in sick. Plus I would really like this for Christmas.
http://www.knifecru.com.au/bolt-action-knives/damascus-bowie-knife
Big G


Midsummer but it's Winter Here!!

Helloooo Sweeties,
Here's my audio :) have an awesome show!
Huggles always
Love Leeta xoxo
PS - Big thank you for all the support for my show - Behind the Avatar :D you all rock
Have great show xoxo

Hey CAW crew. It's been a long 3 weeks. I had quite the eventful past few weeks. I missed the show two weekends ago due to my wife's grandfather dying in Tennessee and had to be traveling during the show. Then the following weekend I was actually finally moving into my new home and was just too busy to do anything game or even computer related.

That all being said, and being over and done, I finally get internet this weekend! They're coming to hook it up on Saturday morning between 10 and noon. I'll finally be able to come home from work (10 minutes away instead of an hour) and play some WoW. I can't tell you how exciting that is! Not only that, the internet speed is going to go from what we had out on the farm at 150kb/s to 50mb/s down. Which is like comparing dial up to cable.

I did manage to get in a good deal of playtime a few weekends ago however, and got my Panda Monk, Yeiro, to level 41, and then started a DK alt as promised, and yes, he's an Orc. Additionally, I made 1300 gold on Earthen ring finally. Which means I can afford my first BOA from the guild vendor and can get 10% more exp on Yeiro with a Stained Shadowcraft hood.

That all being said, I hope everyone is doing well, and I can't wait to see everyone in game, as well as get my voice chat set up so I can chat with all of you. Look for pictures of the house on Twitter and feel free to make requests!

Hope you all have a wonderful week,

Apologies for my recent radio silence. I've been dealing with some health issues, and haven't been able to put together a recording. Thought I'd get something done today, but I don't think you'd enjoy hearing the nagging cough!

I've been making the alt rounds, getting Voltessa to 90, then running Midsummer events with a few toons. Rogueslayer (Blood Elf mage) went from 32 to 40 on mostly flames, and Jolantru went from 52 to 60 mostly on the same. Right now I'm working Everthorn from 64, with an eye on 68 and Northrend flames. Got her to 67 on festival quests, now dig-dig-digging her way to 68.

In other news, Lilbitironic the gnome rogue met her match at level 23 in a gang of furlbogs in Darkshore, but she's back in business as a warrior.

On a staycation (aka WoWcation) next week, so I look forward to playing and recording a little something. Have fun, everyone!

i have put another audio into the dropbox to play also, so this is going to make 2 audios from me this week, thats what you get from canceling recording, a double-dose of Grand Nagus Audios, now i don't know if thats good, i'll leave it up to you guys to figure out, if you want to run that risk ever again :) 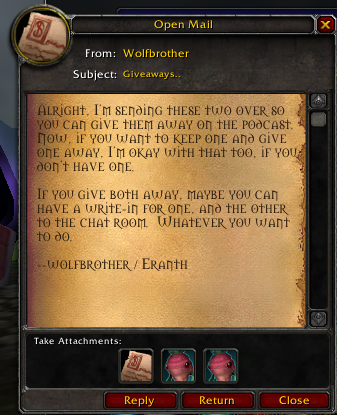 Posted by Aprillian at 8:22 PM