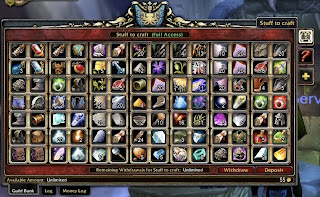 Episode 44 - Even numbered episode, it's time to train!

What We've been doing:

Aprillian
We decided to start over on a PvP server, as alliance.

Patch stuff
Guild banks are cool. Perfect for people with alts. No longer do you have to remember who is holding what or use Rpgoutfitter.com. You can store stuff in the guild bank. Not too much room so you won't be storing silly stuff. It's going to make all the difference for true altaholics. If you have 3 accounts like I do and a bunch of different alts, it's worth it to invest in a guild and guild bank.

Tips:
Eggs, start collecting small eggs for the Holiday season. You'll need them to make cookies. So will everyone else. You can sell them on the AH right at the start for a few gold.
Posted by Aprillian at 11:49 PM No comments:

Ctrl Alt WoW Episode 043 - So Much Questing, So Little Time.

Episode 43 So Much Questing, So Little Time

Hollow's Eve is here and there's so much to do. But sometimes RL intrudes. Sorry for the Hiatus. Timing and colds prevented us from recording.

I felt like doing some triple boxing. I had been dual boxing here and there, including some double dual boxing with Ashayo in the Hinterlands. It's nice because we both understand the intricacies of operating two characters at a time. This week I took Aprillian my Level 33 Belf Warlock, Rilfire my Level 51 Orc Hunter and Auntrillia my level 60 Troll Hunter to Felwood. It's very tricky because at level 33, in an area where the mobs are 49 to 52, Aprillian aggros everything in a very large area. But the beauty of bringing her with the higher level hunters is that while standing back and offer auxillary assistance with one of her demon pets, she accrues Timbermaw Rep. Oh and a bunch of exp. By the end of the week, she was neutral with Timbermaw and had dinged a level. Rilfire is now friendly as well. Auntrillia didn't get much because at her level, she only gets 2 points of rep for every 10 that Rilfire and Aprillian was earning.

New Mail Rules - I was afraid they were going to affect me.

Someone says in trade they needed a Deadly Blunderbuss. I whisper back that I have one for 2g. They whisper back, there's one on AH for 1g. Okay then buy it. He said something about not being born yesterday. Well to me 2g for an item I trained to craft and gathered the materials and then stored it in my inventory is not a lot of money.

* Been trying to play Arlaerus some. I just missed Alliance so much. Ironforge and Stormwind are just such great places to hang out. Did some grinding and questing in Stranglethorn Vale as well.
* Grinded the good-old Bloodsail Buccaneers. Even killed one of the captains (all while soloing).
*

Do the alliance get turned into Horde characters? Seems the answer is no.

Are you on an RP server? Tell us your experiences in RPing.
Posted by Aprillian at 9:58 PM 2 comments: