Second Guild – One day logged on and it didn’t exist – felt homeless and confused
• Regrouped, got stronger, felt good
• One day we got a message everyone was joining another guild
o Felt betrayed
o
Decided to make a guild of one – Enjoyed it, especially with dual boxing
Then came The Instance Podcast Invitation, decided to try it out. Found out what it’s like to be in a really good guild


Being a Good Guild Member takes work and dedication. The transition from being a Guild of one to one of 1000 is amazaing.

Read the forums for both what’s coming up and what’s going on. It’s also a good way to get to know people.

Speak up in chat, even if you don’t have a lot to say. Don’t be afraid to ask for help and to offer it.
• Aprillian is an enchanter on Earthern Ring and I love running up to people with the Guild tag, inspecting them and then offer them the enchants I can do. Ctrlaltwow is a Jewelcrafter and gives his stuff to Aprillian to give away in similar fashion.

What I did this week

Ran Instances for the first time in a long time –

RFC – Ragefire Chasm – 2 times with some great people from the guild
• I love this Instance
Wailing Cavern – another great run. Got some good loot – finished a quest

Went on a raid to Stormwood. It was so much fun. I put pix up at:
• http://web.mac.com/ctrlaltwow/
It was exhilarating. There were many of us and as we ran up through STV and through Duskwood and then getting clobbered in the first little town there I think it was Raven Hill

Didn’t do much on my “Main Alts”. Spent most of the time on Earthen Ring

I transferred two alts to Earthern Ring, mostly helper Alts.
• Prilfire, now known as Iwari, from Lightenhoof. She was sitting there all alone and I never use her. I had gotten her as high as level 37, she’s a Warlock and has Engineering 247 and mining 238.
• Rillia, now known as Veyle, from Baelgun, she’s a level 36 Rogue with Blacksmithing 269 and enchanting 246.

I won’t be playing them much but their skills will come in handy. It was fun to transfer them over. And yes I paid the $25 fee twice, but it was worth it.

So my new main alts are now:
Pair
• Aprillian Level 19 Warlock Enchanter and Miner
• Ctrlaltwow Level 16 Blood Elf Hunter
o Because it’s a Role playing server, these two have a story. They are brother and sister sent out into the world and they have a character blog, something that was suggested on the AIE forum to help people roleplay better, and it’s a series of letters home. You can find it at http://aprillianer.blogspot.com/

Singles mentioned above and Jajal, replacement for Ctrlaltwow because of his name. Right now I am trying to level him up to 20, so he can do JC to 225.

Banker Alts
• Trexrar, Gruzilla, Wateva
• Wateva is a Blood Elf and I got her to Dustwallow Marsh from Menethi Harbour. From there she swam to Ratchet. She died a couple of times from these things in the water, but each time she ran back to her body, she’d get a little further out and then was almost at Northwatch and she died again, and ended up at Ratchet graveyard and since she was only a level 5, I let the Angel bring her back to life and got on the boat and went to Booty Bay. So I have my dragon hatchling connection going again. Not as lucrative, I think others are catching on but still making money. I’ll have to find a new money maker.

After finishing the Lady Sylvanas quest, I was sent to Sepulcher and Tarren Mills and walking along the road through Silverpine, I forgot how beautiful that area is. I will have to back there and kill stuff.

No new email
Did get a nice comment on iTunes, thanks Priesteffer. Run over there and add your own.

Find a guild that fits, keep looking until you do. Don’t be afraid to /gquit and don’t hesitate to join one because you can always /gquit. If you do join one, jump in feet first.


I lost a good friend Steve Soltys, I just wanted to shout out to him the he will always look good to me and that I miss him more than words can say.

I put up a special presentation yesterday of the Lady Sylvanas’ performance. I’m going to close the show with the full uncommented version of her lovely song. 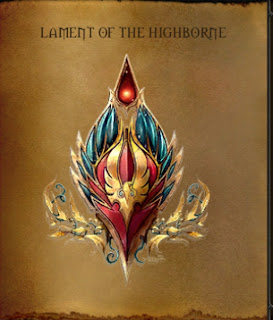 I had the pleasure of seeing Lady Sylvanas perform her hit single "Lament of the Highborne.

The video is up on iTunes right now. You can find the song without commentary at the end of Episode 017.
Posted by Aprillian at 7:48 AM No comments:

Ctrl Alt WoW Episode 016 - Sweet Sixteen and I Got Mail

I got two whole emails

First, thanks so much for doing the show! I also especially appreciate your taking the extra effort to put chapters, artwork, and notes in for iTunes. :) It's extra work and I appreciate it lots!

My first question is: How do you decide which alts to focus on at any one time? I only have 10 characters, all on the same server, but even that is enough to put me at sixes and sevens sometimes.

When you sit down to play, how do you decide -who- to play?


Second question: Do you let people know who all your alts are?

I do, in that I have a traditional naming scheme for all my characters, which is that they must all begin with "Ab". The story behind that is a bit long, but anyway it lets everyone know, especially in the guild, who's an alt of mine and who's not, and that helps with any guild-related business I may have to take care of. People always know it's me so they always know how to get ahold of me.


Thanks for your response!

First off, love the podcast. This podcast hits close to home for me because I to have many alts (mostly alliance toons). I have a 63 human warlock, 61 human warrior, and my new main a 37 troll mage on Earthen Ring. I have several questions to ask. First, you mentioned that you dual box and your current favorite combination are the hunter and rogue. What other combinations have you tried? I recently read an article where a guy multi boxed five characters at the same time (Army of Xzin if I remember correctly). Since you play many alts do you have a favorite class overall? I've played most classes up to level 10 (with the except of a shaman which I have not played at all). My favorite class was the warlock (level 63) but I got tired of him and now is retired. Currently, mages are my favorite class.

Second, I'm a big fan of instances (Scarlet Monastary is my favorite pre-60 instance). Do you have a favorite instance? My highest level character is 63 so I haven't seen that many post-60 burning crusade instances. I'm really looking forward to the Old Hillsbrad instance located in the caverns of time.

Lastly, I'm a big fan of mods. Do you use any mods? I use the basic mods such as titan panel, ctmod and kth threat meter. I used to use class specific mods such as necrosis for warlocks.

Thanks for taking the time to read my e-mail,

Didn’t do much on my “Main Alts”. Spent most of the time on Earthen Ring
http://armory.worldofwarcraft.com/guild-info.xml?r=Baelgun&n=Ctrl+Alt+WoW&p=1

WoW can be whatever you want it to be. There’s no limits, choose what makes you release the most endorphins.
Posted by Aprillian at 11:16 PM No comments:

New Phrase for us Alt Addicts – Instead of Main player, I have a Main Server

Does anyone else Dual Box?

Ran around Darkmoon Faire – it was fun, got the mugs of Dark Iron Ale and got JubJub for Pril

I love the Armory

World of Warcraft: The Burning Crusade has established a new sales record for PC games, with approximately 3.5 million copies sold within its first month. Keeping pace with the expansion's sales, World of Warcraft's worldwide subscriber base now exceeds 8.5 million. You can read more about these achievements in our latest press release. We send our sincere thanks out to the players across the globe who have continued to help us bring Azeroth, and now Outland, to life, and we look forward to adding more great content to explore -- and seeing how the arena tournament plays out -- in the months ahead.

Pril & Zee – Blood Elf Twins Pril = Hunter LW/Skinner Zee = Rogue JC/Miner
• 22/21
• Zee made [Figurine - Jade Owl] and was so excited to give it to Treshel, my level 44 Hunter who always needs a burst of mana but then after making it
o Binds when picked up
o Unique
o Trinket
o +3 Intellect
o +2 Spirit
o Requires Level 35
o Use: Restores 30 mana every second for 12 sec.
o Cooldown: 5 min
o Sells for 15 Silver to vendors

Good week, lots to do.

Lunar Festival is still going on, get those flight paths and rep points
Posted by Aprillian at 11:15 PM No comments: 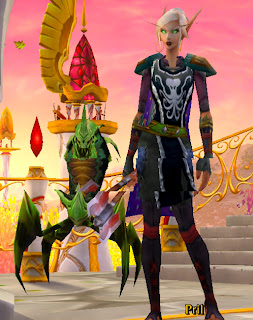 I spent some time "Seeding" Servers with my alts. The Lunar Festival is a great time to put alts up and get Flight Paths. Then when or if you want an alt on that server, then they already have the flight paths.

I wanted a Ravager on my Blood Elf. I figured out a way to get my Horde Character into the Alliance starting area. All it took was some trial and error and some dying.

Pril & Zee – Blood Elf Twins Pril = Hunter LW/Skinner Zee = Rogue JC/Miner
• Level 22/21
• Grinding for Leather in Southern Barrens. Quite successful, Thunder lizards and their yummy tails, thunderhawks and hyenas. Pril got her cooking to 125 and got the book from Aprillian
• And of course Pril got her Ravager from Bloodmyst Isle

Treshel Orc Hunter Miner/JC
• Level 44, dinged in the Badlands
• Grinding Scalding Whelplings for leather with Rilfire
• Did some jewelcrafting, got a bunch of jewels prospecting horded iron ore. Hard to get tin for bronze 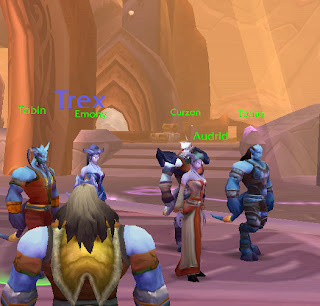 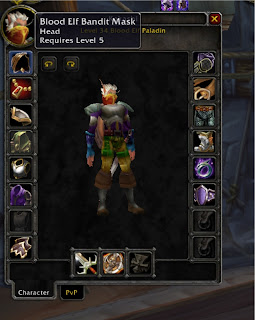 
Email
ctrlaltwow@gmail.com
Posted by Aprillian at 12:04 PM No comments: