Sorry about the delay, technical difficulties beset us.
Posted by Aprillian at 10:07 PM No comments:

What We've been doing

OK, It's that time of year again -- when everyone goes to the mall. So, work has really picked up. And, because of that I have very limited time for World of Warcraft. Now, I know a lot of people think that there's ALWAYS time for WoW, and you're right. However, last week also marked the release of Mass Effect, an Xbox 360 RPG that I had been waiting patiently for. New always takes the place of old, but I find that WoW is like your comfort foods. You may want to try snails, you may even like snails, but grilled cheese sandwiches will always be delicious. But, going back into WoW after some time away can be disorienting. Here are some things that I do to help get me back in the saddle again (which ever mount it happens to be):

- Challenge allies to duels outside a capital city. This will help you refamiliarize yourself with your hot keys and keyboard layout. The point is that it's OK to die. Better than running to your corpse across STV.
- Look over your quest and remember "The Tubes" are a great resource. Get your bearings and remember all those quest items and XP you were lusting after
- Go shopping. Nothing gets you back in the mood than a little spending spree at the AH. What good is fake gold if you don't spend it. Splurge and get those blue leggings you have been craving. If you're low on gold, then spend some cash on materials for professions. Leveling your professions also helps get me back into the swing of things.

Play your own way 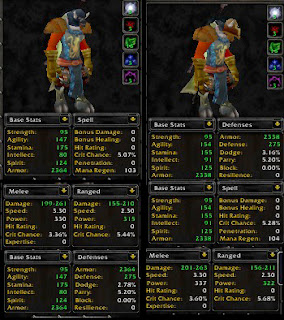 Contest Announcement - Tell us why you are an Altaholic and you could win a WoW Battlechest!

Dual Boxing reintroduction
Posted by Aprillian at 10:28 PM No comments: