Aprillian and Ashayo discuss another week of playing World of Warcraft, Blizzard's great MMORPG. Another Fun Week in Azeroth. Glanthur pipes in with a segment. Full Show Notes at http://ctrlaltwow.com

Some of the ways to learn your alt, most are very obvious. But we'll discuss the ones we've used including some pay ones.

Decided to triple box Maradon. This was my first time there and I loved it. There's nothing like seeing an instance for the first time.

Aprillian went to Outland to train tailoring and there was a ! for her. It was Report to Nazgrel, she couldn't get the next quest but she got 4750 for that much, cool. Grinding in the crater.

Full inventory, put stuff on AH, made some money


I listened to episode 58 today while questing on my Orc Hunter and I heard you speak about bad pugs and good pugs. I feel I have to take issue with a couple of the things that were said.

What you have to keep in mind is that even though we all know "it's a game," it requires a great deal of time. It's more of a hobby or pass time than a game of checkers. Time is something of value to almost everyone and should be respected. Though WoW is "just a game," many people become extremely serious about how their time is spent. Some people, in particular children, have limited amounts of time they can play, and as such get really harsh when they feel someone is wasting that time.

Second, we hunters are often some of the worst players in the game. People will call you huntard and boot you on the Horde side just as quickly as they will on the Alliance side. There's lots of us hunters and the vast majority SUCK. Playing a hunter is very easy. Playing a hunter well is *extremely* difficult. There is a reason the word "Huntard" exists.

Few hunters understand the mechanics of their pets, and fewer still actively manage their pets during gameplay. Most hunters use the same pet for everything. I keep a black lion for PvP and a white lion for raiding, specced very differently. One of the things I am extremely careful about is pulling aggro off a tank. You need to develop a feel for it. Wait for the tank to get multiple sunders in before allowing your pet to join the fight. Get an aggro monitoring tool like Omen to watch, and if you and/or your pet start to creep up there in aggro, back off. Feign death. Pull the pet back. Also as you indicated, in an instance turn Growl off.

Since Burning Crusade, we have a great talent called Misdirection that can be used to dump even more aggro on the tank as well. Let the tank gain aggro, cast Misdirection on the tank, then send your pet and fire.

Though it may have seemed like a rude comment from your PUG leader, learning to trap, chain trap, and kite is best done outside of an instance. It's more fun, no pressure, and you don't risk screwing up the instance run for everyone else. For fun, see how far you can kite some wacky mob out in the "non-instance" world. It's great practice. Just the other day I kited Volchon, a 60 elite monster, and a 58 elite dragon out of the Burning Steeps and into Redridge. I was in no danger of dying from the two, but the idea wasn't about defeating them and surviving. The exercise was to see how long I could keep them both on the kite string, how far I could bring them, and managing their aggro. The fun part is when all the lowbies look up and see the giant monsters show up in Redridge.

The hunter is one of the few classes you don't learn to play in a week or a month. You don't know how to play it just because you made it to 70. The hunter's abilities are subtle.

Be prepared to be criticized repeatedly as you learn to play your hunter. If you want easy mode, roll a lock. When you see a good hunter, it's a thing of beauty.


Glanthur submits his segment. Let's hear it for the Alliance.
Posted by Aprillian at 7:51 PM No comments:

We now have our own YouTube Channel. I posted the video from last year, while I work on my new dual boxing video.

Posted by Aprillian at 9:17 AM No comments:

Aprillian and Ashayo discuss another week of playing World of Warcraft, Blizzard's great MMORPG. Dual and Triple Boxing in Instances.

The joy of running an instance alone with either a high level alt or dual/triple boxing.

What We've Been doing:

Aprillian made Primal Mooncloth and then got this cool buff. Primals are expensive

Spent time in the Hinterland. I brought in Treshel and was surprised that she and Aprillian are both 54. 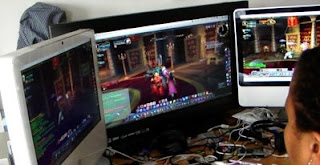 Played hookey from work. I know terrible. But I needed a mental health day. I took Aprillian and Treshel with Ardrion into SM just for fun
Learning how to use Curse of Weakness for crowd control
Did the Library and the Armory. Died trying to get the Scarlet Commander without clearing the Cathedral

Friday:
Ardrion dinged 42 in SM. We cleared the armory and got to the guy who dies and then is resurrected. It was funny because I was panicked when I killed him easily and didn't get the little check mark from the quest thing.

Treshel hit 55 and swapped out food for her pet and her.

Got the Field test quest in tanaris, while hubby went to the grocery store, took Aprillian and Ardrion failed it because I ran out of time
Posted by Aprillian at 12:18 PM No comments: 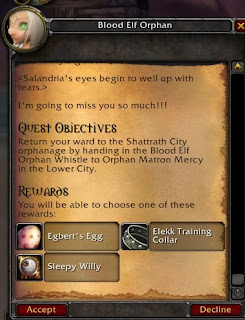 Polymorph currently isn't bound to a key - I just mouse click that. Typically it's only used pre-fight as CC, so this isn't time critical.
28282
Posted by Aprillian at 3:26 PM No comments: