http://ctrlaltwow.podbean.com/2013/03/06/ctrl-alt-wow-episode-310-where’s-my-green-fire/
Aprillian, Ashayo, Tedrah and Jeppy discuss another week of playing World of Warcraft, Blizzard's great MMORPG. Contest Ongoing send an email to ctrlaltwow@gmail.com telling us how you play WoW, either as an altaholic or dealing with it in your family life to being placed in a drawing for a WoW Pet or an Authenticator.

Hello CAW Darlings!  I'm sorry but Mom & I didn't get to play this past weekend, and darn hockey is blaring in the house as well, so I didn't manage to get an audio done for you this week.  <=(  BUT...I did get an email and a couple of screen shots from Pixie, so that's good!  =D  Here's her email:


"Hi ya Aprillian, Ashayo, Tedra, and whichever awesome co-host you have with you this week! And even though I know our Jeppy hasn't made it back, a big hello to him as well! :)  We're so happy your feeling much better, we all have missed you so much!  I hope everyone is having a great time in game as well as out of the game this week! :)


Been a busy past week for me in the game, had lots of fun and got to talk to some of my favroite peeps! Juuno & I didn't get to play Sunday, my fault this time as I did a little running around town and then watched movies with my boys.  Tommy bought me the Breaking Dawn part two so we watched that, told Speedracer if he said one thing during the movie I would have him grounded for a year... lol! And by that I meant no PS3 or computer, TV and he would have to wash walls...it worked! That boy can not shut his mouth for one second...he's got something to say about everything. Oh and it's a great movie.... much better than the last one!!


Anyway, on the game this past week Pixie got her farm all done, then went on holliday!  She only comes out if her sisters need a potion or two, plus to take care of her garden. But now that 5.2 is here it's back to work she goes! And she is on her first part of the new farm duties, and her home is now Sunsong Ranch!


My mage is finally holding her own so I guess she gets to live a little longer; she has Willopelt to thank for that. It's really hard soloing with her but I took Willopelt's advice and it's working. She is almost exalterated with the Klaxxi and only dies now maybe once or twice a day... lol.

Phenelope is doing really good and I am very proud of her; she is now exalerated with the Klaxxi. She's also doing dailies in the Vale, and she reached revered with them last night, so maybe today the rest will open up.  I can't wait to start the Shado Pan dailies.


Now here's a shout out to Kara... she made me a Ghost Iron Dragonling!  It's awesome! I almost died the first time watching the little dragon... he shoots lighting!!  So very cool!  She also made me a new shoulder enchant for Phenelope which brought my intellect up to over 9000. With the extra buffs from potions and food she reaches well over 10,000 plus, I think thats good right?
Donnie, Kara and I did Arena of Annihilation!  It was alot of fun.  We did it once before with Willopelt and got the dragon staff for my mage. I forgot about stage 3 at first (the guy who does all the fire damage), then it was too late to warn Kara.... I'm sorry! :(   But all went well and we got new weapons. Hoping she'll go with us again... maybe into dungeons.


Sweet Leeta... it was so very nice talking to you on the game last night...I guess I'll have to stay up late more often! I'm hoping maybe someday I'll get to give you hugs in person!  A trip to Aussie would be nice & yes, Juuno, you can come too! :)


Well thats been my week in the game.  An awesome learning week full of fun! So for the horde, the alliance & the wonderful people in my life :)

PS Waited all day for the patch and now it's up and I'm soooooo excited!!! Have fun :)
PPS Screenshots are the before and after shots of the shack!" 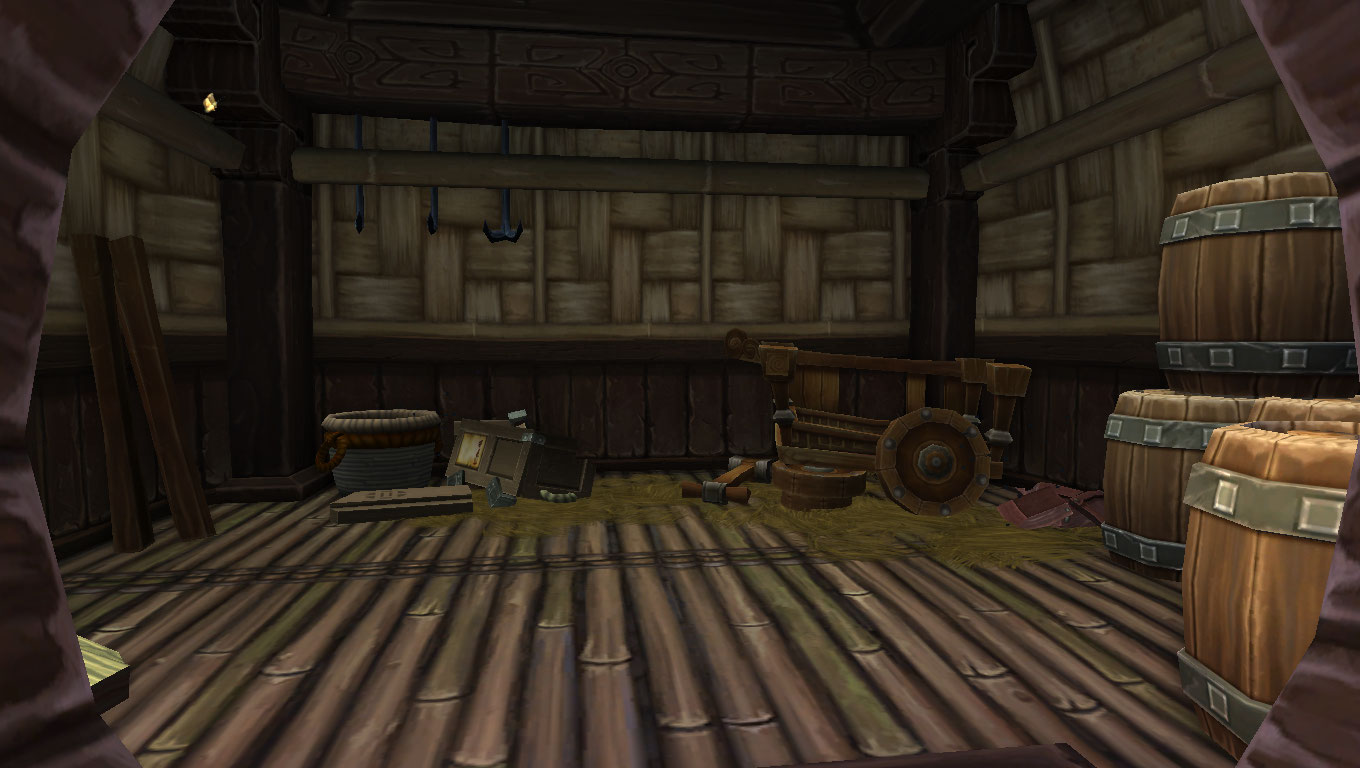 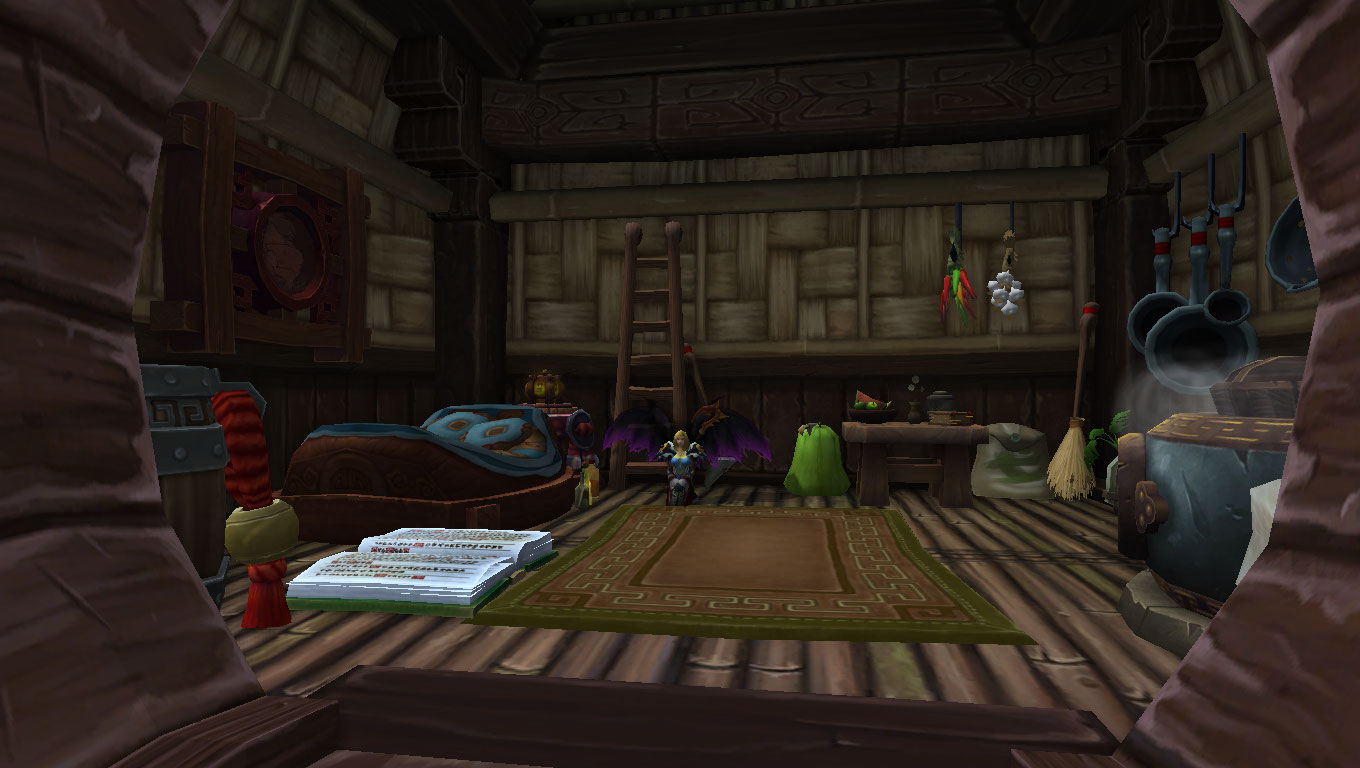 Okay, my CAW Darlings, I promise I'll have an audio for you next week!  I hope everyone's doing GREAT and that we ALL get to hang out at Blizzcon!!!  C'mon Pixie, C'mon Aprillian!  Wooooot about Ashayo, Donnie, Molson, Slainte and Strumpet going!  And also Twitter friend Terrence! I can hardly wait!!! *squeeeeeeeeeeeeeee!*

Sucking up to the Tillers
Digging up daily Yoon,
dual boxing weed killing
AH Armory
Fighting beast in valley, stand with wall at back
Shamaya’s segment
We did Heroic Vortex Pinnacle! 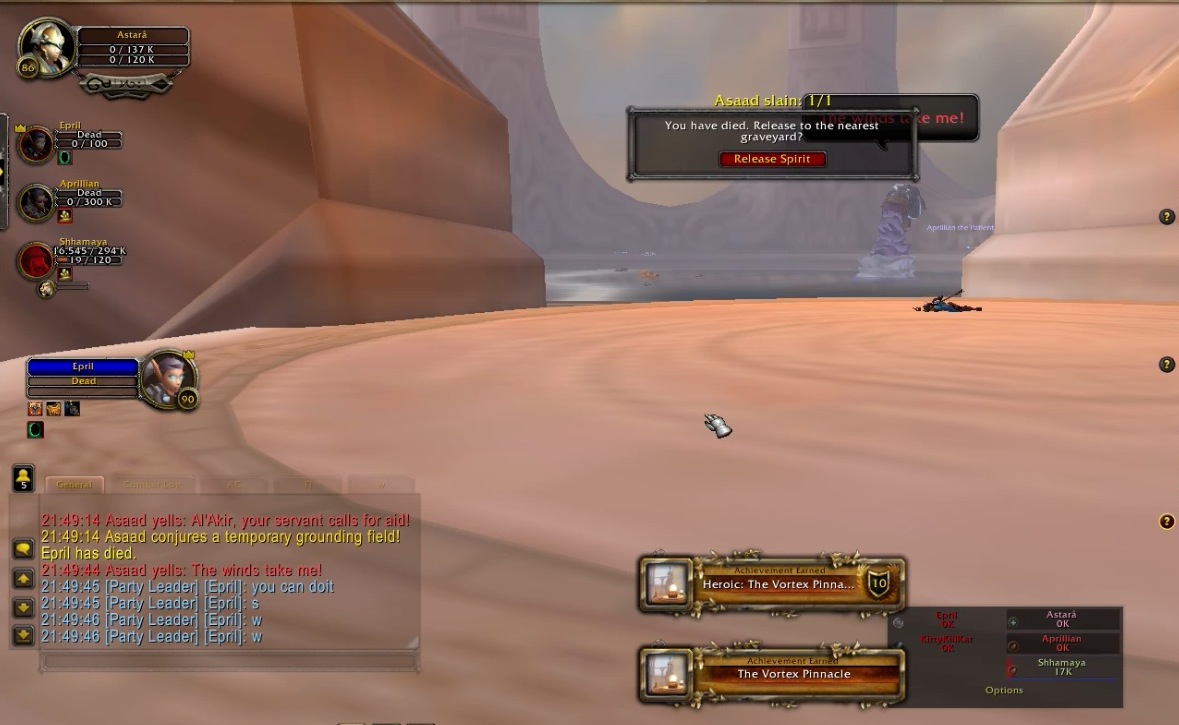 Back to Brawler's Guild
I suck at dps! Couldn't dodge cyclone, interrupt, and dps all at once.

Levelling Ashayo
- Tried Strand of the Ancients but it was a kill fest ... for the alliance
- Eventually got into Shado Pan Monastery LFG. First pull, tank dings 90 and drops group.
- I was worst dps - 17k compared to 23 and 26k
- Questing/Digging/PetBattling/Herbing
- Big Bag of Herbs - 20 golden lotus,

Rare in [Big Bag of Arms] with epic staff and epic leggings in it, in addition to blue item!

First, some music info: yes, Big G was correct that my last audio was Pink's "Glitter in the Air." If you want to see an amazing performance of this, do a YouTube search for Pink Glitter in the Air Grammy Performance.

My previous audio, the stressful one, was "Politics Polka," by Tina and the B-Side Movement. I used another of their songs, "Shine Your Light," for my Lunar Festival submission.

Back to the game. Since my last submission I did get my original toon, Rogueslayer, to 90. Since she's Alliance (human rogue), that gave me Double Agent, along with Terrific Trio. Woot! I've attached a screenshot of that event. As usual after I get an alt to level cap, I then jump around from toon to toon. Darkmoon Faire is here, so of course I'm doing lots of profession dailies with lots of alts.

In this week's audio, Voltandra provides some answers to a question I'm sure we've all heard. Enjoy!

Attached is a relatively random update. Just the usual alts etc while
driving in my car.

Hope you've all been well and ghat Jeppy is getting better!

Hi folks, here is a submission for the podcast. Perhaps one day it will include some background music.

Once again a big shout out and get well to El Jeppy if he is back damm man what took you so long. Shout to clone Rho loving his work. Plus one last shout to Juuno and pixiegirl who I like to go on long romantic walks with when they don't know about.


Necro
Hello CaW friends, Aprillian, Ashayo, El Jeppy, and Tedra and whom ever might be this weeks special guest.

I'm afraid there will be no Nekro audio this week as I've come over quite sick these past few days. Not sure what caused it though I have my suspicions it might have been that dead Worgen priest I cannibalized in a battleground Monday evening. I guess my old mum was right, never eat things you find on the ground.

My new toons are coming along nicely. Rumplekuss, the Goblin Rogue is now level 13. Rootagaga, the Troll Druid is now level 11 and Tinlock the Ironman is level 13.
For some reason I'm really going crazy with new toons, I even rolled a Warlock Gnome to be my new alliance side Ironman toon. His name is Nekrognome and he's currently level 5.

Thats all the news from the house on the hill this week. Big hugs and Many thanks for your wonderful podcast we do enjoy being a part of the ctrlaltwow family.

and remember undead love is forever….

Clan of Darkness
Hey Gang....If you've maxed out your cooking ways all to 600 go to Nam Ironpaw and buy the "Cooking School Bell" for 50 ironpaw tokens. Here is a link to a Consortium page that guides you through this awesome set of dailies that will net you some awesome rewards... http://stormspire.net/professions/8853-cooking-school-bell-beyond-ironpaw-shuffle-print.html
Take care everyone you all are awsome!!!!!

Posted by Aprillian at 8:12 PM