I hope everyone's doing well this week!  I wasn't feeling so hot when we recorded this last night, but hopefully it still sounds great...lots of other great voices to hear...hehehe... =D

After the recording, Tiber, Grand Nagus, Donnie and I tromped out to the Isle of Thunder, spent about two hours or so murdering all of the Animated Warriors we could find, and got all of our reputation up to Exalted with the Black Prince!  It was great!!  Thanks again guys!

Also, attached is a screen shot of the mighty Clan of Darkness after our first successful Heroic Sinestra kill!  Woot!!!  It was GREAT! It was easy once we figured out the strat!  Also, I accidentally rolled "need" on EVERYTHING... I was so horrified when I realized this and then gave everything away, but still...what an awful feeling that was...hehehehee.  <=S  I swear I'm not a ninja looter!  *giggle*  Anyway, have a great week!! 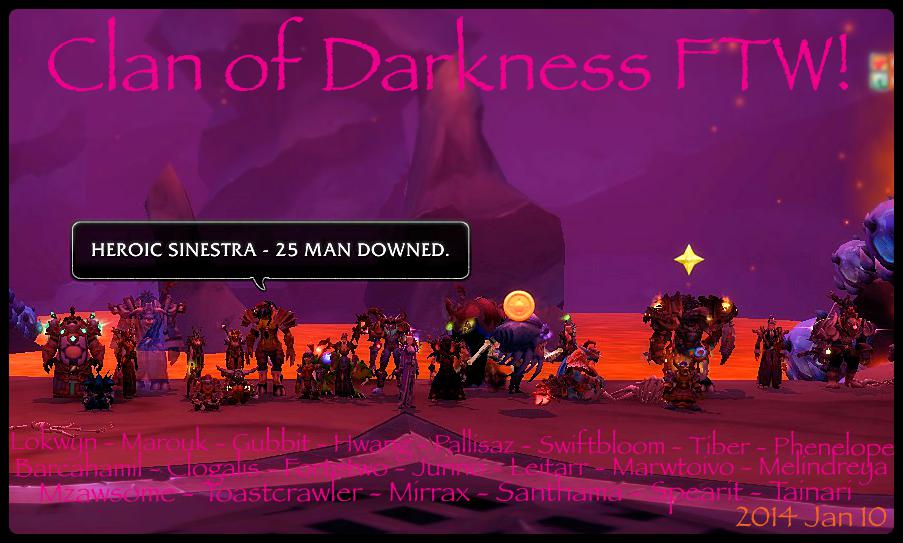 Missed a day of farming and fell behind on mats for living steela
kyprite is breaking me.

Got a special gift in the mail from the lovely Leeta. Named her Leeta and almost killed her.

1/ DMF - Dinged Lvl 51 on my Monk and Lvl 49 on my Warlock on Earthen Ring
Jeremy Feasel is still a weasel!!
2/ TNAK - Mage hit Lvl74
Did a few dungeon runs - Azjol-Nerub and The Nexus
*see screenshots** 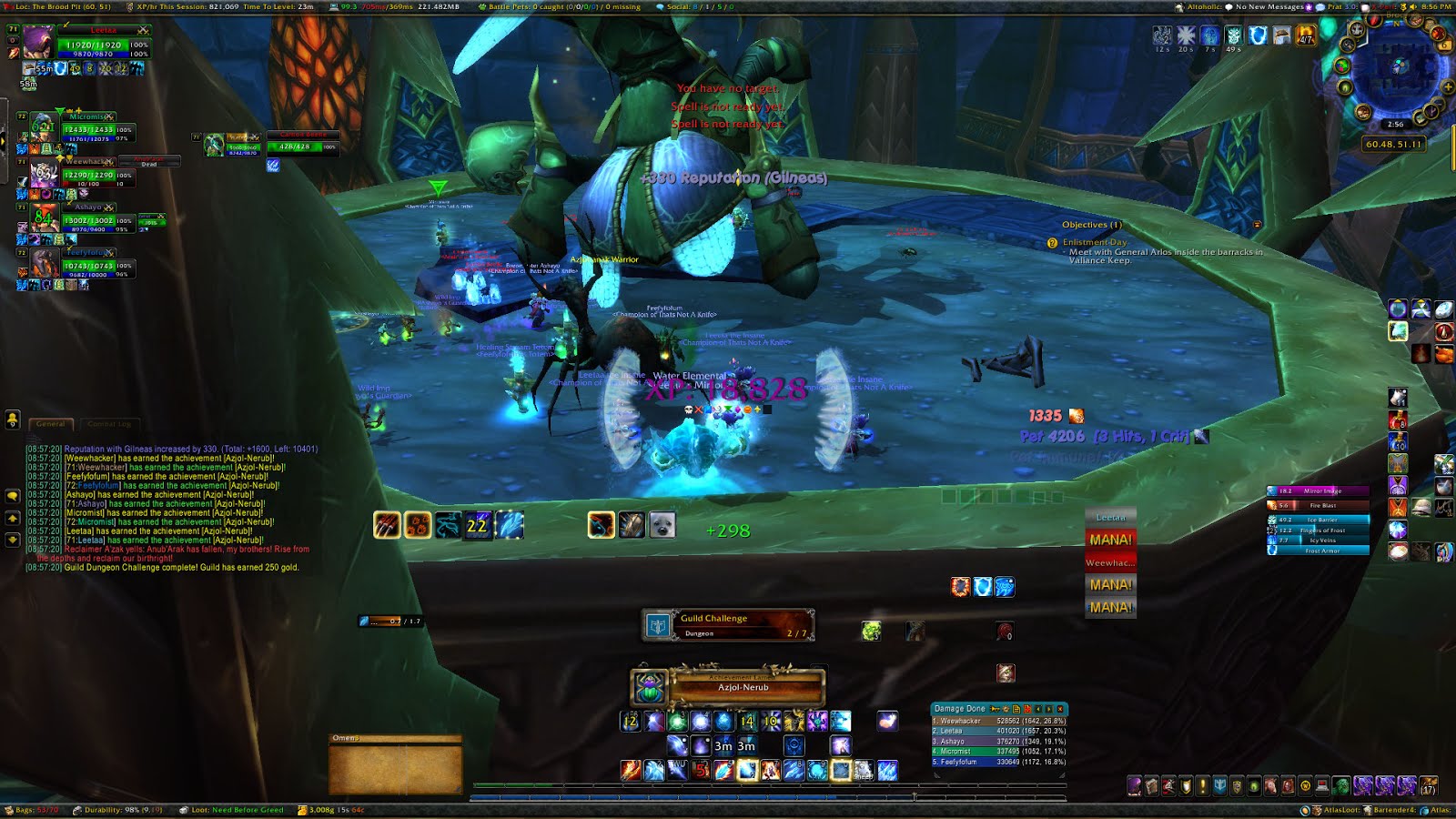 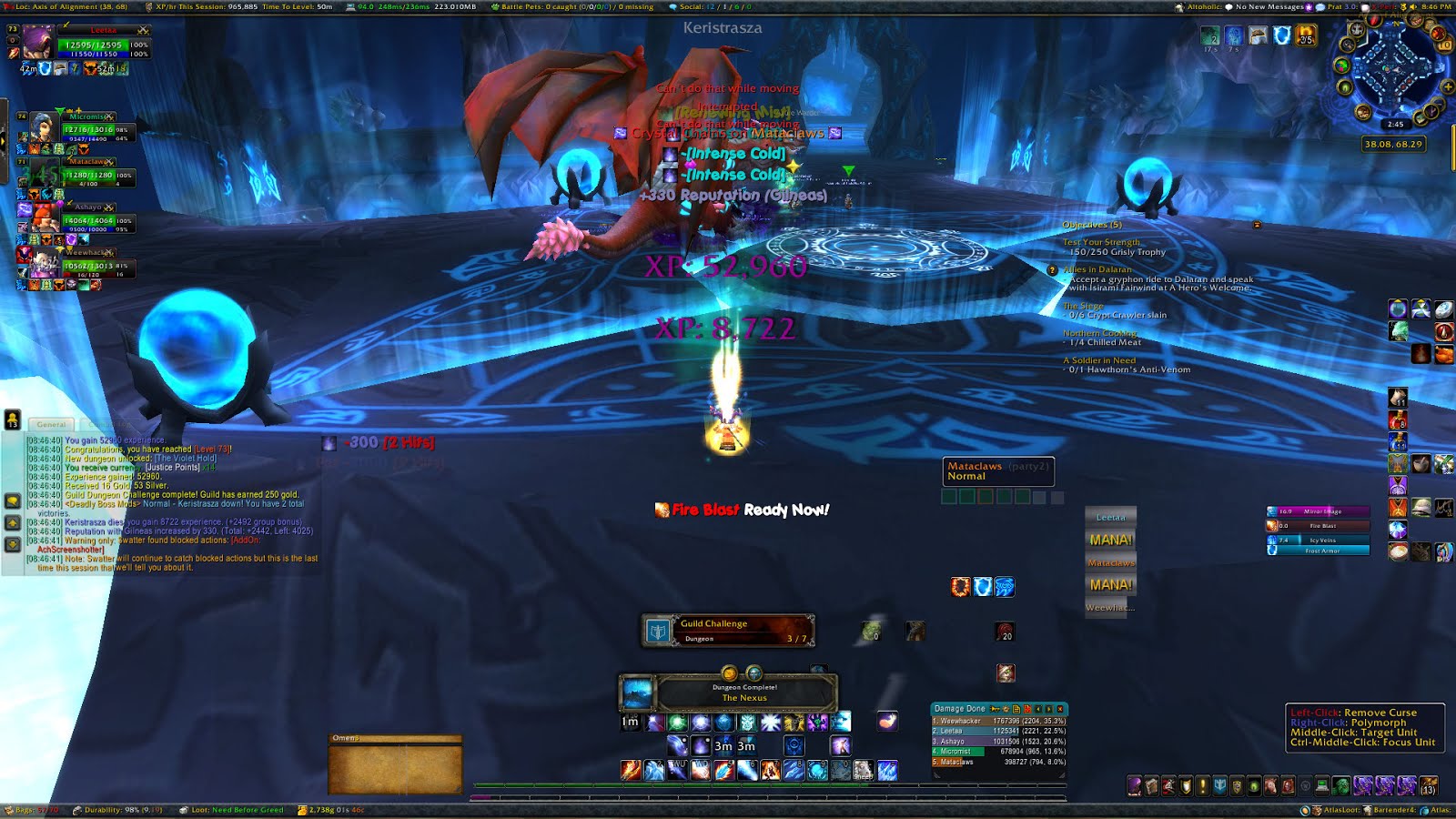 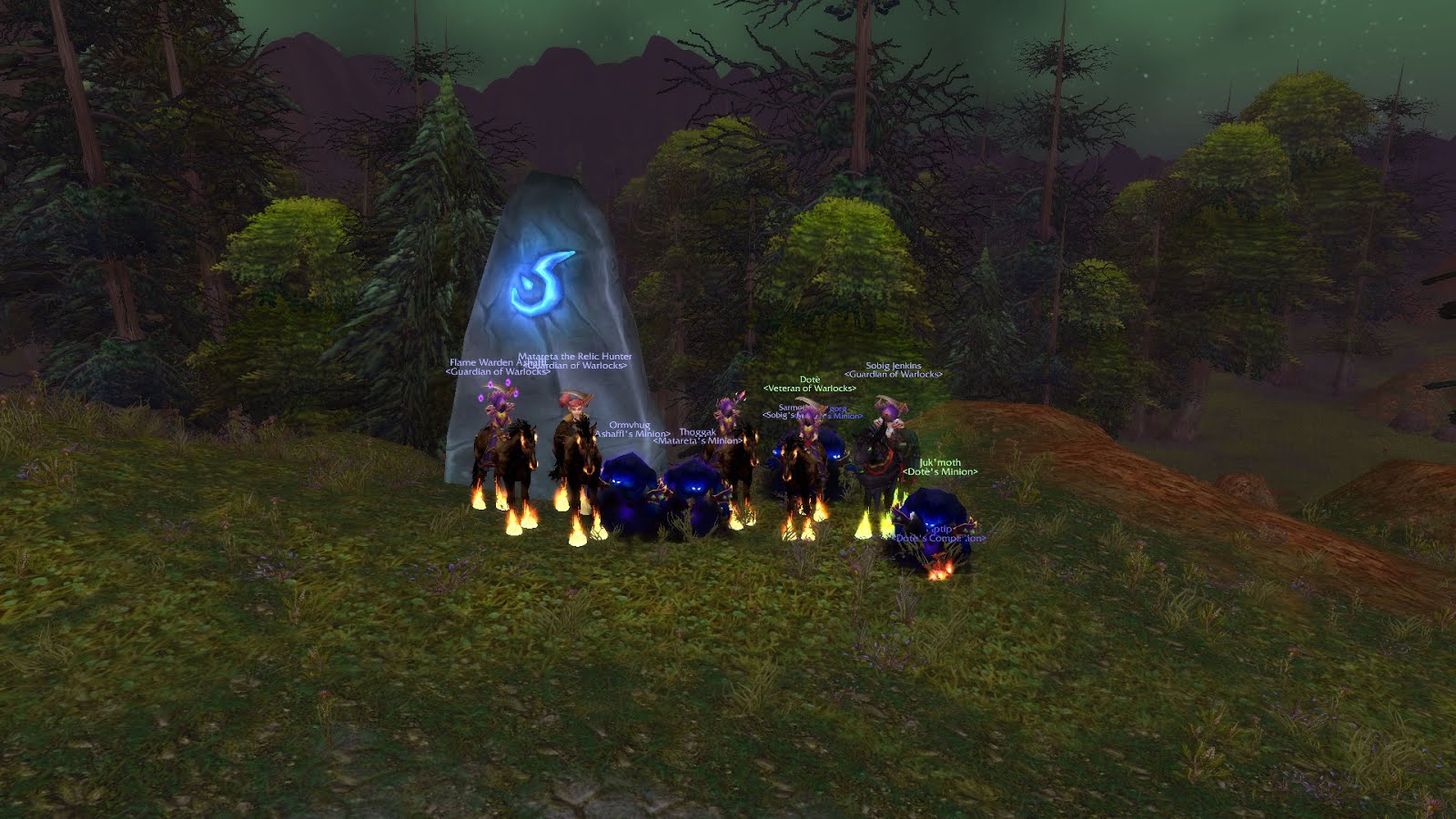 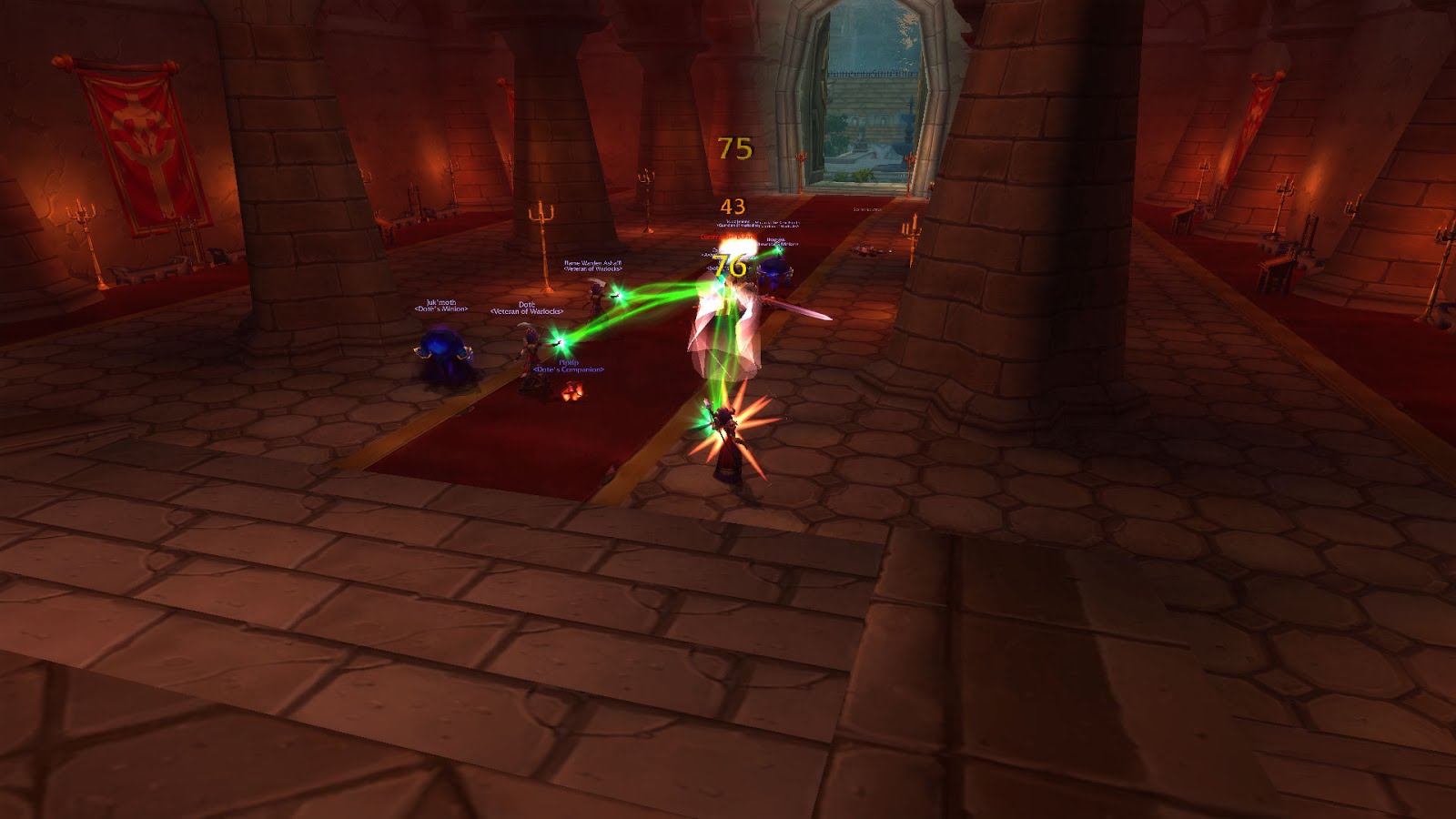 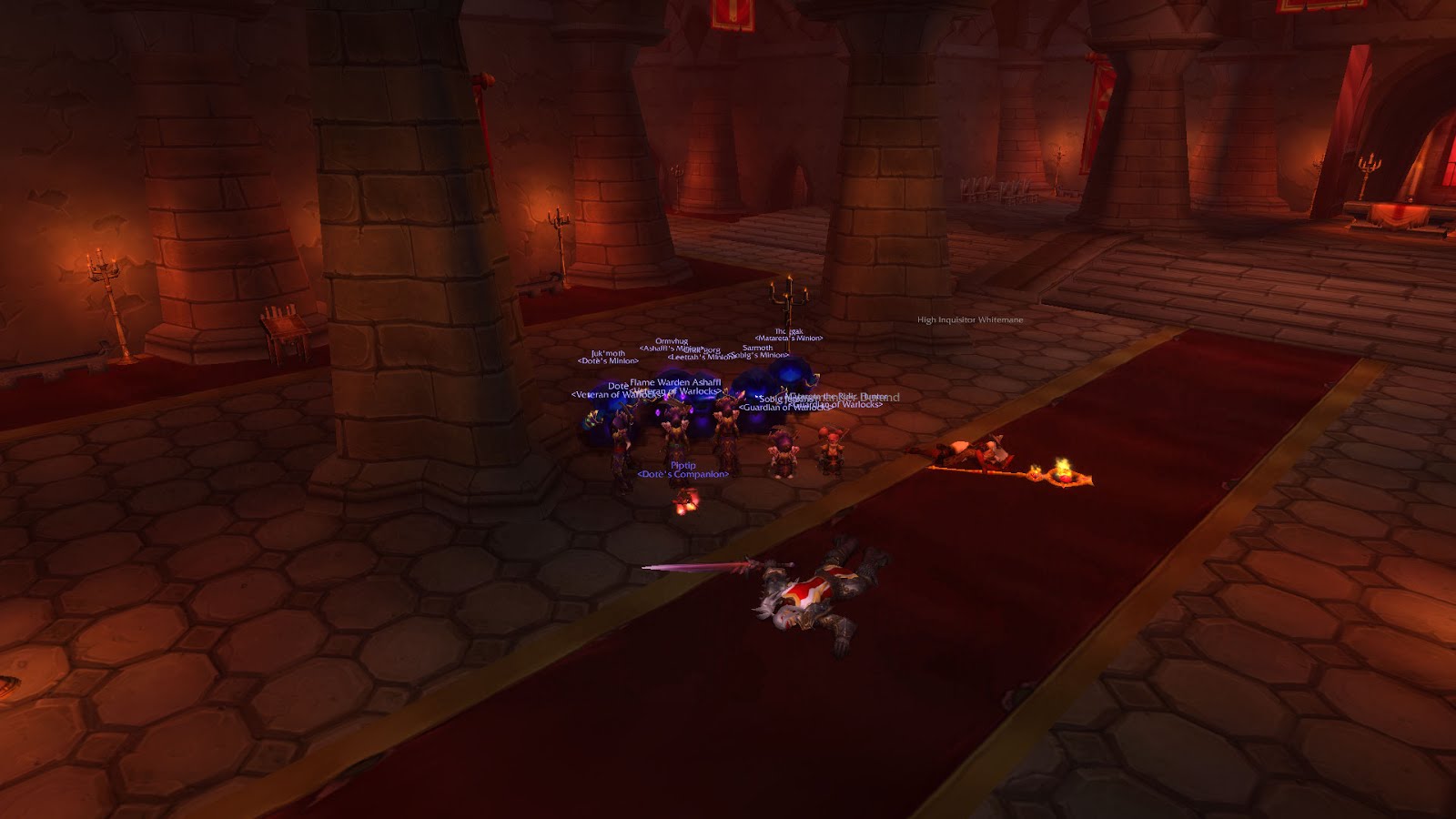 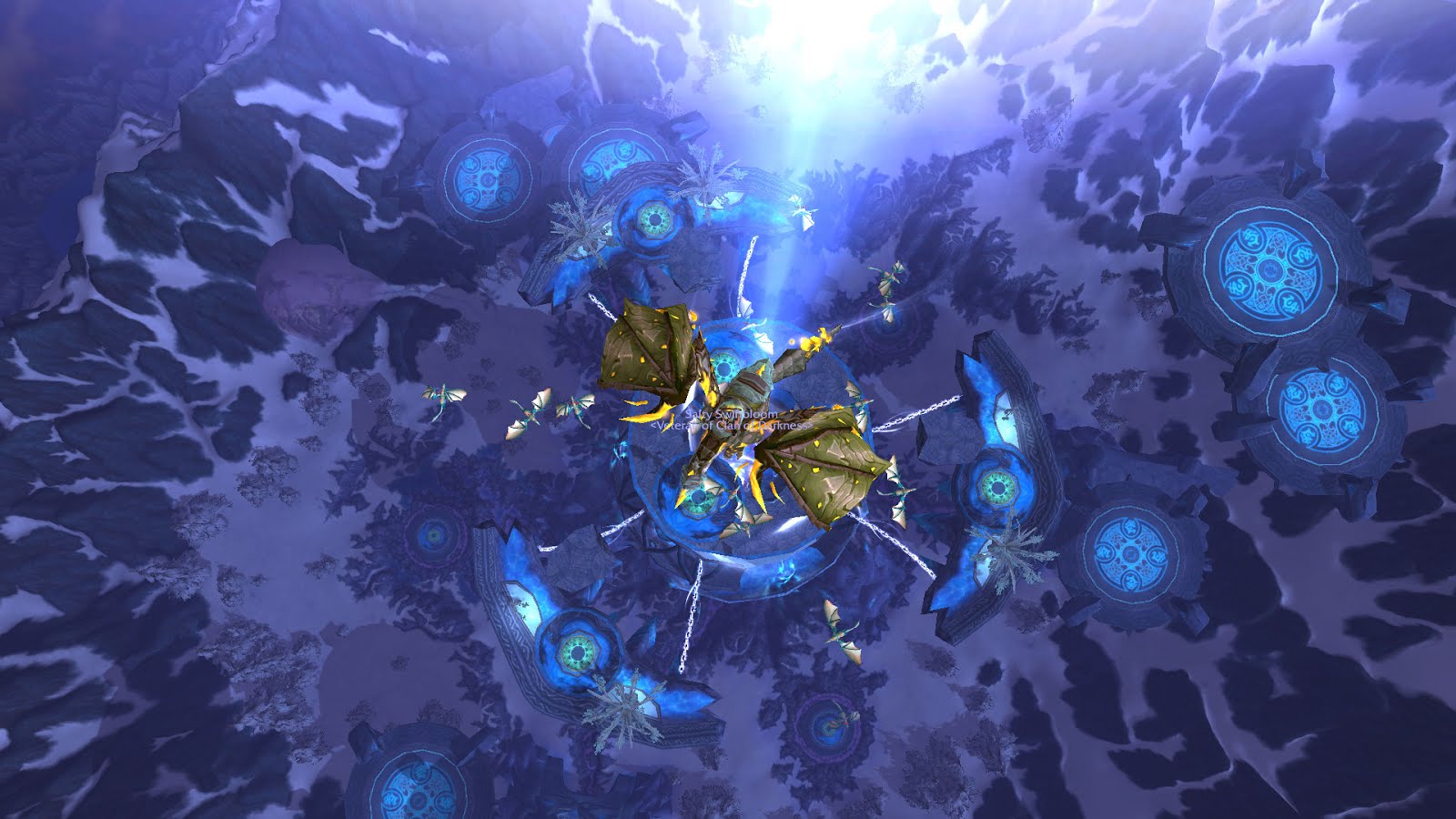 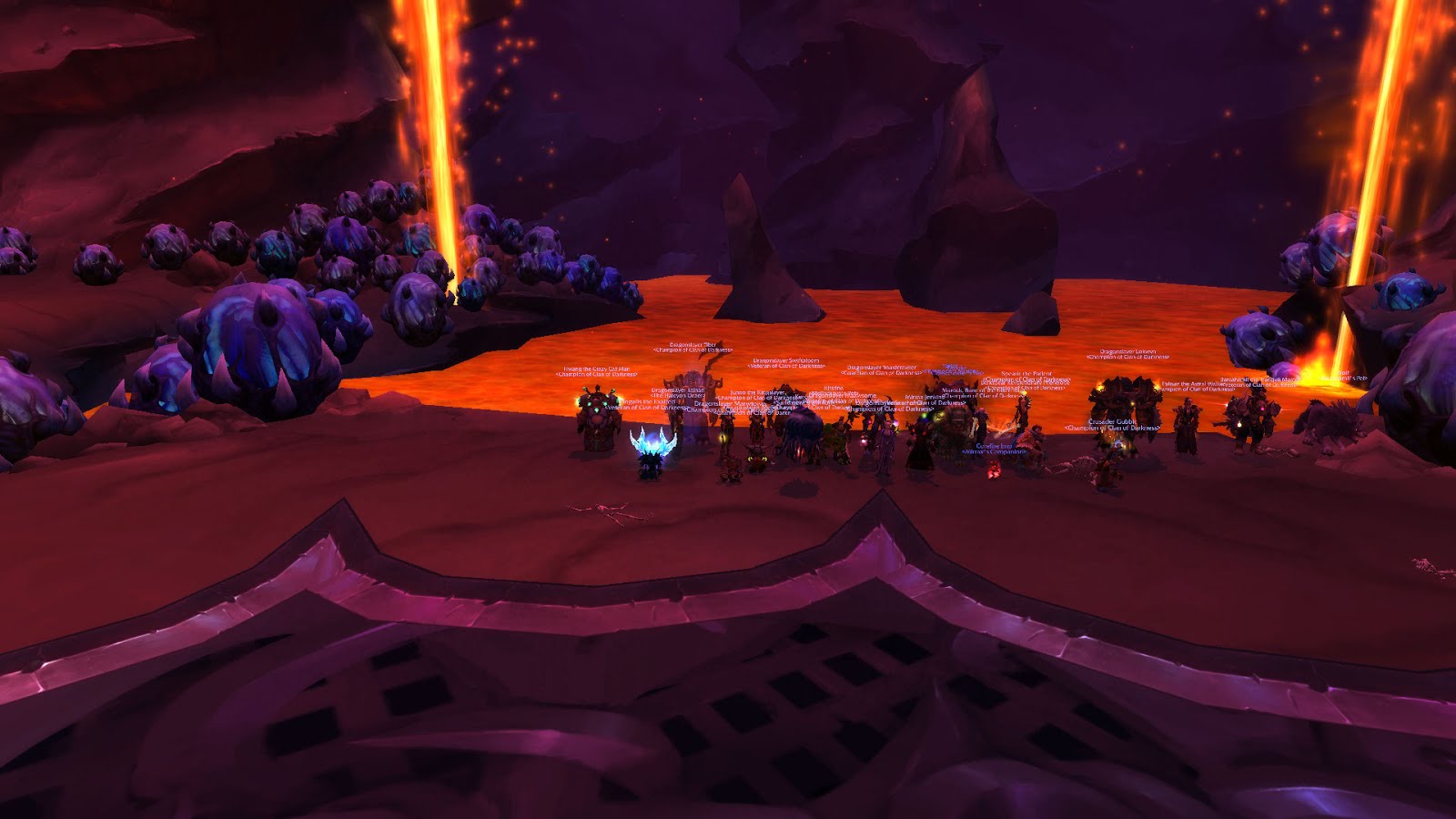 Shot of CoD after Heroic Sinestra is down!!
***GRATS TO ALL*** 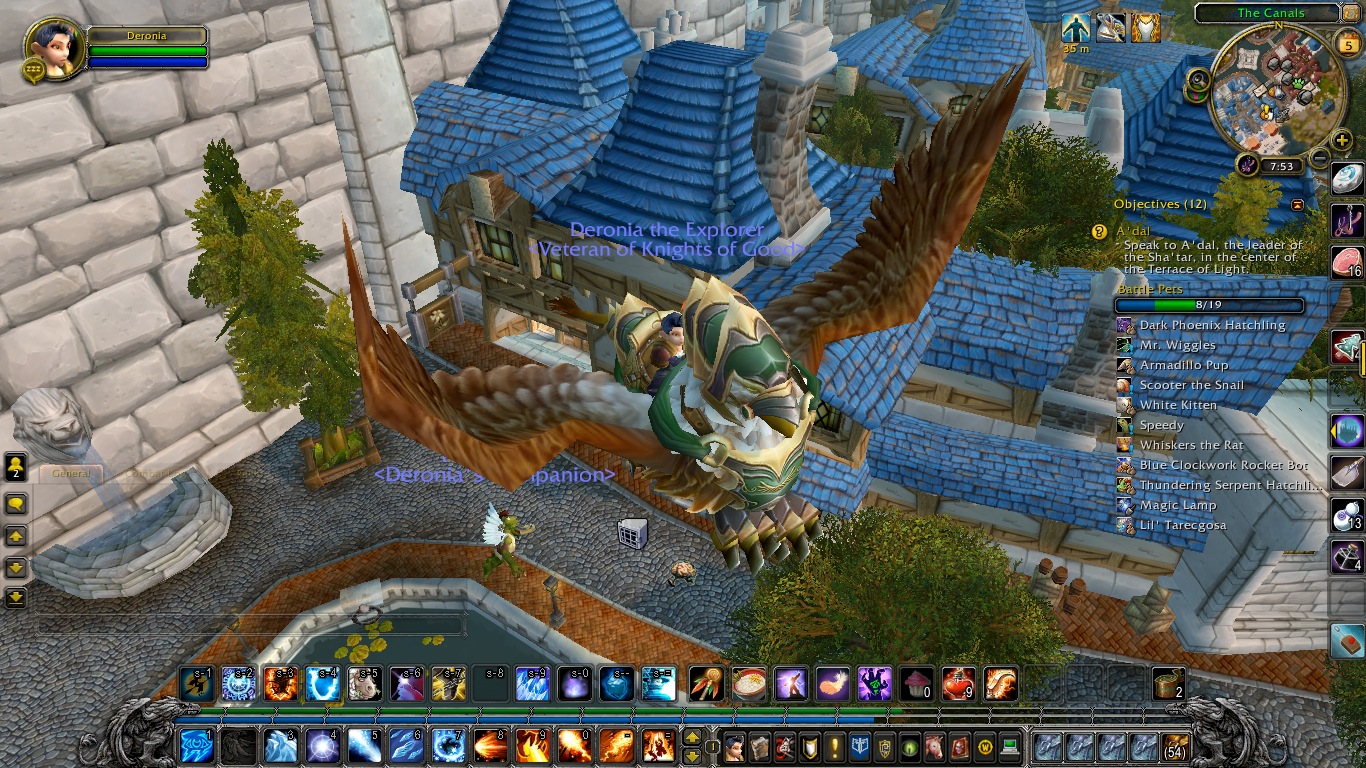 Hello everyone,
I would first like to say it was a great pleasure to meet you Friday night running dungeons. I was so nice to actually see thank yours and other kind words. After words I felt really bad I let your tank die. I though I could get a beer before he needed healing. But I was wrong

That is way I am preparing my Druid Healer to move to your server and become part of your guild. That is if yall will have me.
But first let me give you a little life history about me.
Early Early in the days there was a great game called Everquest or as most called it Evercrack. Yep played it, played a Druid and a Necro and just loved it I think I played it for like 3 yrs. Then in the far reaches of space came a game called Star Wars Galaxy ( SWG). I just loved this game and loved it always to the end when Sony came in and destroyed it. I left with a deep empty volved in my life. Had a Imp guild and we built a city it was great. not sure how many yrs I played it but I think I live there quite a bit.
Then there was a  couple low games like EQ2, Conan, etc.
Then came WOW and it first it was a so so game with lag that could stop a city. I remember when you went into Org you had to look at the ground as you ran due to the lag being so bad. But it was a hit with me and my friends and I think we settled in on Darkspear. We always played the Horde never the other side. Its funny back then u didn't if anyone found out you where labled a spy and booted out. I to have had many alts on weekend nights we would go to the Barrens get drunk ( RL drunk) and run our chars off one of the high mountains and kill them. I still have 1 char from my early days of playing and that is my Hunter Salmonhunter. I do not play him any more but he was king in his days. in my life in WOW I have had 2 guilds under my control and they where fun and kinda like family. Its been along time since I've seen that.
I've seen this game go from worse to better to bad to good. I've heard the cries from the people complaining about how other chars are so OP or its to hard, mainly from kids. I think it pretty sad.
Right now I have 4 lvl 90's one Ill be moving to your server Badgugu and some lower 80's thru 60's sitting on Darkspear.
Well I feel I've probly ramble to much so Ill be leaving now.
PS
I just love the pod cast they are so funny.
David T. Barber
aka
Badgugu     Druid Healer
Rustybone Arms Warrior
Dirtymartini  Pally Healer
Icbones        Lock

And gentlemen too - there are lots of them here!

Just wanted to wish you guys a happy New Year!  I've been so busy with family, so I'm like 3 episodes behind, but I hope to catch up soon! From what I can gather, you guys are keeping so busy with raids and stuff! Good for you!

I'm mostly logging in to my main account to manage profession dailies and maintain their stuff - you know - make sure no one goes hungry on my account!

And, of course, I am still leveling all my favorite pets - trying to get at least 3 to 25 each week - not always succeeding, but eventually, they will all get there!

I tried out multi-boxing - I would tell you about it, but I think Jeppy has exclusive rights on The Duvet Cave this week (fingers crossed we get it together lol)!

Much love to you all!

Thanks Strumpet for your generous donation.
Hi April,
I previously won a Hearthstone beta invite.  Recently, Blizzard sent me another one.  I know the invites aren't very scarce any more, but if you would like this one to give away on the show, or if someone on the cast would like to use it, the code is:
I hope someone will get some fun from it,
Rob/Tiber