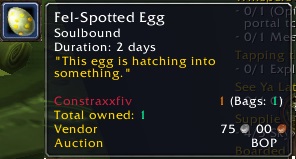 Got a ticket for BlizzCon
Looking forward to this years BlizzCon and the community events very much,
since it’s halloween this year.
Getting a bunch of achievements to finish out meta achievements and having
issues with cross faction transmog.


I don't know what it is but the past few weeks have been crazy busy.  Not much game time except for a tiny amount of leveling here and there.  My mage has finally made it to Draenor, and it is a lot harder than I remember it.  I wonder if it is because of the new scaling. Before I could just hop around to different "star" enemies to collect their rare treasure to get better gear, but now they are a tad too strong.


Here's a new Blast from the Past coming to you from episode 333.  Enjoy!