New mount Wild Goretusk (1000 Blackfang Claws) lot of spikes, Tanaan Jungle honored version of the big mount 20% of the cost, 15 to 20 minutes to farm the humanoids in the cat people area… 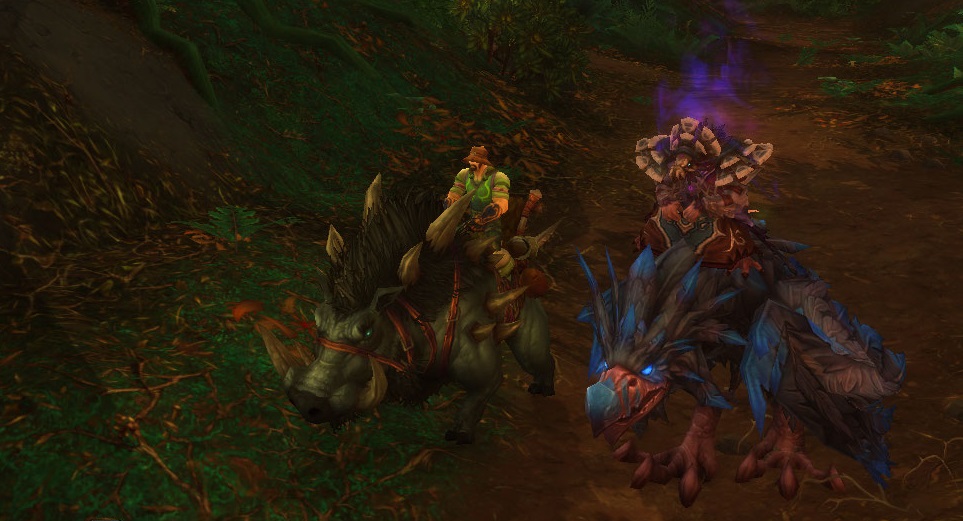 Some PvP and a few achievements :

Ion Hazzikostas interview with WowChakra:
We will get Tier Sets back in later patches of Shadowlands
Set bonuses are a reason why they where removed.
My take on them, let us remove the bonuses form a acquired piece and store them when
You destroy the item, like disenchanting or scrapping it.
Then you can apply them to a new item of same or lower iLvl, and you use it, almost like a mix of a enchant and a Azerite Power.


A bug i encountered when doing BRC, fighting Karsh Steelbender:
We where running with a Unholy DK and couldn’t get the boss to stack the debuff to remove his shield ( -99% damage taken )
He was using Outbreak and that is bugging the boss to not accept the interaction with the fire in the middle to get the stacks to be able to kill him.
So make sure your Unholy DK party member doesn’t use Outbreak in this fight.


Highmountain Tauren Druid has reached 110 and earned the Highmountain Tauren Heritage Armor.
Zandalari Troll and Mechagnomes Allied Races are not something i’m gonna focus on for now, i just don’t feel like doing that atm, i unlocked both, but i’m not after leveling them atm.
Next projects are to get my Forsaken Mage to max, leveling him as Arcane, and finally get a Priest to max on ER, Vulpera Holy Priest
Currently the Mage is 86 and the Priest is 72.
The Priest is a engineer/miner and finished leveling Vanilla Engineering to 300/300.


Didn't do too much in WoW this week.  This week's Blast from the Past is brought to you by episode 410.  Enjoy!

Each week GrandNagus takes a closer look at some of the most useful World of Warcraft addons out there.
Addon(s) of the week: Farmhand
Farmhand adds dynamic buttons on the screen while you are at Sunsong Ranch.
The buttons allow quick access to the Plow, Shovel, Bug Spray and Watering Can if they are in your inventory. If you do not have a given item, there will be no button for it. Also adds buttons for seeds that are in your inventory. You can even sell unwanted seeds at a vendor without having to open your bags.
When you leave Halfhill, any tools remaining in your inventory will be dropped. You can pick them up again at the farm. (You can disable this feature.)
A special Crop Scanner tool will let you quickly find any plants you've overlooked that need special attention. (Very hand for the hard-to see Smothered and Runty plants.)
To move the buttons, hold SHIFT and drag a button with the left mouse button.
In the Interface Options panel, you can turn on/off tool dropping, turn on/off chat messages and sounds, turn on/off the portal shard buttons and control whether Farmhand automatically hides itself during combat.