Aprillian, Ashayo, Vrishna and Jeppy discuss another week of playing World of Warcraft, Blizzard's great MMORPG. Contest Ongoing send an email to ctrlaltwow@gmail.com telling us how you play WoW, either as an altaholic or dealing with it in your family life to being placed in a drawing for a WoW Pet or an Authenticator.

Ran RFC, used portal to get back

Took Epril to do JC quest in Hyjal, charms and
Can't decide which to do.

Dragonblight
- Having done the Horde side of Wrathgate so many times, nice to finally see the story from the other side.
- One quest (just after you get sent to Wyrmrest) has you go help kill a Frigid Abom, Geist Attackers, and Ghoul Attackers. But from the other side of the Ruby Dragonshrine. Not sure if it's bugged or not, but no Ghoul Attackers were spawning on the Alliance side. After about 15 mins, I wandered over to the Horde side and there were heaps. So I started merrily AOE'ing. Until I realised I was hitting horde NPC's , got flagged, and promptly jumped on by half a dozen guards!
- Alystros in Emerald Dragonshrine no longer elite
- The Magnataur chain is no longer elite
- Alliance don't have the whole quest chain in New Hearthglen - go straight to killing the High General - and she's not elite.
- We find out why Naxxramas is hovering where it it - it's over a mausoleum.
- Since when do druids get 310% flight for 11g?
- Lots of Lore on the Alliance side , including seeing how Arthas gets hold of Frostmourne
- Might of Dragonblight - 9% into 81

WoWGlitch in Dolanaar reoffering the Dreamcatcher quest that I already completed.Massive streamlining of remaining quest chains.  NPC's moved to better locations for turn ins. No longer running back and forth to Darnassus and Denalan at lake outside Dolanaar. Rellian Greenspyre is now at the hut alongside the road toward Darnassus where the skinning/leatherworking trainers are. The NPC that gives you the quest for mossy tumors is now there too. And when you go to turn in that quest Denalan is visiting Greenspyre so you don't have to go back to his original spot. They've also moved Oakenscowl.  No longer in the cave, now just northeast of the hut area.The NPC that gives you the quest to kill the spider Lady Sathrah is now at the Oracle Glade instead of in Darnassus.Corithras Moonrage moves from the moonwell in Dolanaar to a spot at the crossroads right outside Darnassus.So you meet him there after filling Oracle Glade phial and then he sends you to last moonwell at pools of A. can't pronounce.  You no longer fight the satyr here instead there is a new NPC is just down from the pools and she gives you a quest to kill the Bough of Corruption that is the source of Teldrasil's corruption.  She gives you a buff that changes your action bar and it's the first little epic kind of end to a quest chain.  Kinda cool. She sends you back to Moonrage who has you turn in the waters you've collected to Tyrande in the Temple in Darnassus which is the end of the starting zones.Couple of screenshots. One of me turning in waters to Tyrande and one with my cat, baby moonkin & cool armor set. 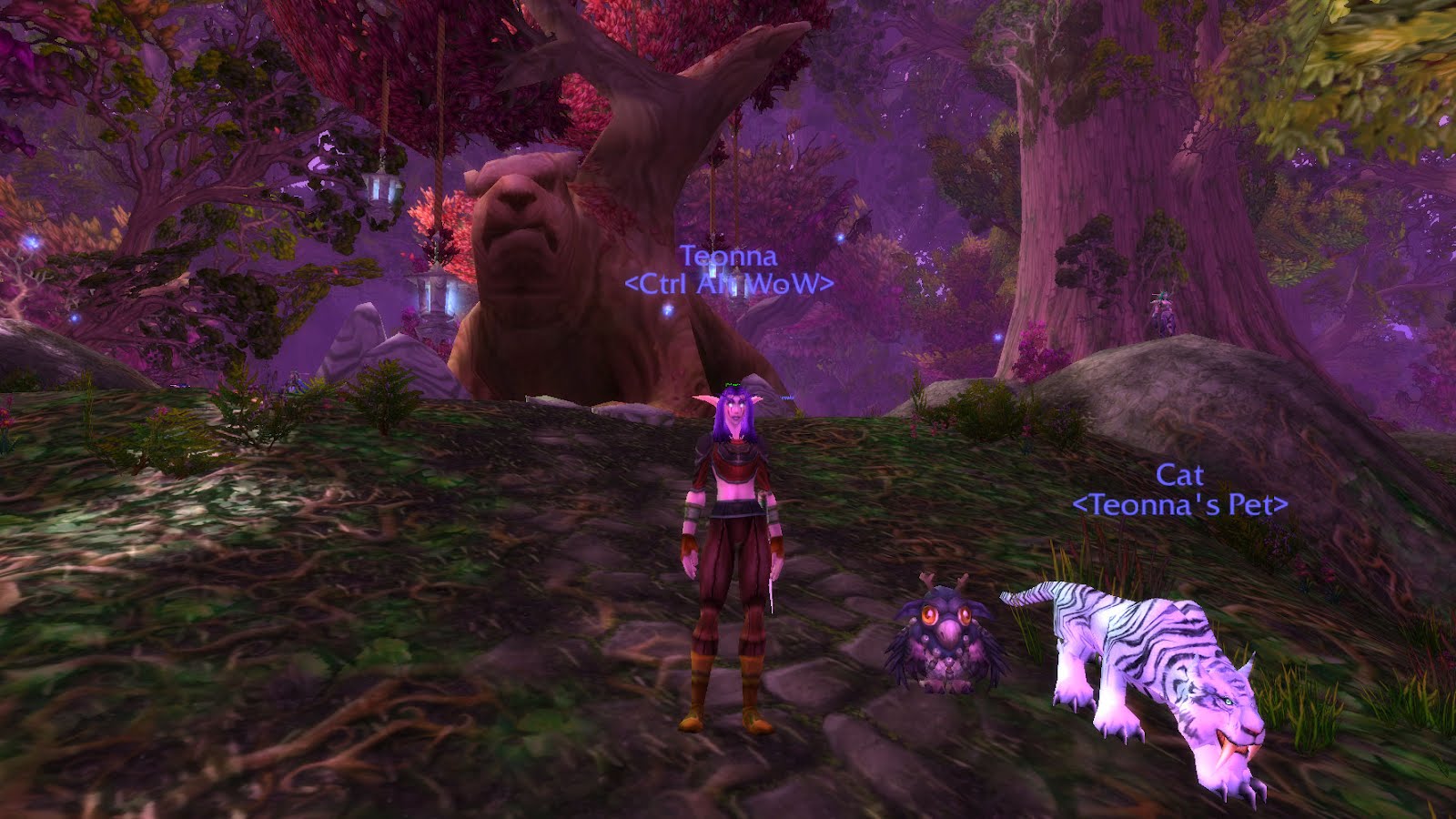 Decided Teonna is going to have an affinity to cats. So all her pets are going to be cat models.50 quest achievement when turning in mossy tumors quest.

Didn't get a chance to play my toon with Aprillian this week.
Only played Saturday on my highest toon Linx.  Got her to level 35 with help from Darcian & Laleh.
Got her third companion on Taris.  All kinds of flirt options with him.
Confusion buying modifications because you can't have the vendor window open and your character window open at the same time. So comparing what you already have to what's available is hard.
Dropped Arms tech and picked up Treasure Hunting.  Need more $$$$$$

I've been listening to your podcast for about a year, and kept telling myself I would write in.  Of course, that never happened - until now.  I've been playing WoW for about a year and a half, ever since my wife (we're a two wife, but one geek household) went off for a weekend with friends.  I decided to give this WoW thing a try, as a friend had been playing for several years.  Friday evening after work I created an account, downloaded the free version and started up a toon.  I stopped for sleep when I realized that the birds I heard singing weren't just in game - they were outside my window, as was the rising sun.  After a solid four hours (okay, maybe three) of snooze, I was back on.  By then it was a fully paid account and I had downloaded the full version (WofLK, at that time).  Now I've got 23 toons, including six at level 85, both Horde and Alliance.  They're spread across six realms, to minimize nonplaying time during rolling restarts or realm-specific issues.  I almost exclusively solo play, and very rarely venture into dungeons (unless I'm well above level and can solo them).

My wife is going away again this weekend, so I thought what better time to finally roll a new toon on Earthen Ring so I could join Clan of Darkness!  I started a Blood Elf Paladin yesterday evening, and as of now Voltandra is at level 11.  When I hit lvl 10 and teleported to Undercity to do some dailies, I ran into Kallisto.  Actually, Kallisto flew through me while my mountless toon was walking onto the elevator.  It was my reminder to send the email and contribute to your awesome podcast.  I'm looking forward to joining Clan of Darkness., now that I've contributed.  Thanks for all the great podcasts!

Voltandra
aka @Rogueslayer1 on Twitter
aka Beth, Framingham, MA

Sorry about the lack of audio submissions but  Ive started the next module of my Open University course and its put a lot of demands on my time and concentration, also I haven't been playing as much WoW as I would like so I have very little to talk about. In game when I have been playing I have been working mainly on leveling my professions. On Saulius Ive maxed out fishing and cooking (as well as Alchemy and Herbalism which I had already leveled) and Ive started working on Archeology. On my bank/personal guild alt Alysius I have been leveling tailoring and Enchanting. I have also started trying to make gold flipping items for tranmog after being inspired by Keelhaul AKA the mogfather. I have had some success but not a millionaire yet!

I guess that's it for now.

Keep up the good work!

As you can tell from the title I have been doing a lot of BG’s this week and I have taken up resedeints in the bottem 3 in most matchers sometime I get up as high as 5th from the bottem but not many.

Week in wow with the Nekros

Prospero and Kalisto did their first Heroic dungeon, Vortex Pinnacle with peter rabbit and a friend of his. It was crazy fun and took a wile to complete (we were up till 5 am). Peter rabbit talked with us in Vent and managed to get us through the the battle with minimal casualties. Thanks peter you and your pal are the coolest of the cool :) oh and thanks to the mystery Druid who did very little in the way of fighting or healing or talking but he did do a fair amount of dancing. Thanks dancing Tauren druid for your truly heroic disco moves.

Prospero received the Bronze drake from Heroic culling of Strath Holm with the help of Auntpol and Kallisto. We've been going through the instance when ever we find everyone online so that all our toons can have the marvelous mount. (we have the most  casual raid group in the history of WoW, LOL)  Its Auntpol's turn next. Go Aunty, go Aunty, its your birthday ;)

Wraith the mage is level 74 thanks to Aprilian's brilliant tip of having the little toon following the big toon on a flying mount wile the 85 is farming. Thanks Aprillian

Lots of work and fun on the tripple holiday week Prospero and Kallisto managed to get the the ugly love bird mount  "Love Fool" title and to loot the coveted "toxic oozling pet"  (two three each in fact, hopefully they will make these bind on equip in a later patch cause all our other toons who were able to kill the holiday boss didn't get squat)

Nekro-bob (aka Nekronomicon) pulled an all night digging marathon on Monday and worked his Archeology from 300 to 525 earning him three achievements in close succession,
Illustrious grandmaster in Archeology, What was briefly yours is mine and Tragedy in three acts. His next task will be to find the rare recipe for the vile of the sands for his lovely wife so she can transform into a dragon.

The Highlight of our week in WoW was a rare celebrity sighting of the illustrious and glamorous Apillian. She was at the inn in Dallaran and we chatted for a moment and took a few screen shots. Thanks Aprillian you're awesome ;-)

Thats all for now CaW crew, a million thanks for all the great shows... keep it up :)

and remember Undead love is forever

I finally got around to recording an introduction before the song this time.

Alliance side: Last week we got our love birds. Yay for pink flamingoes of dooooooom! I also managed to grab an extra one, which I'll try and sell later when the market isnt flooded with them. No love rocket though on any of my alts, oh well, I'll try again next year! I completed a transmog outfit for my rogue at 60, which is great since It means I wont have to look terrible when leveling through outland.

Had little time to play in CoD this week, so sad. I have grand ideas for my Warrior. I am also debating on rolling and "Iron man wow challenge" alt. It sounds like an interesting challenge.

Anyways, here is our audio segments for you guys. Man my voice sounds REALLY hitch pitched when I record it. Maybe I need to adopt a non american accent. Whenever I use an accent in a show my voice drops a lot. Hmm.