Cheers and thanks for your smashing podcast 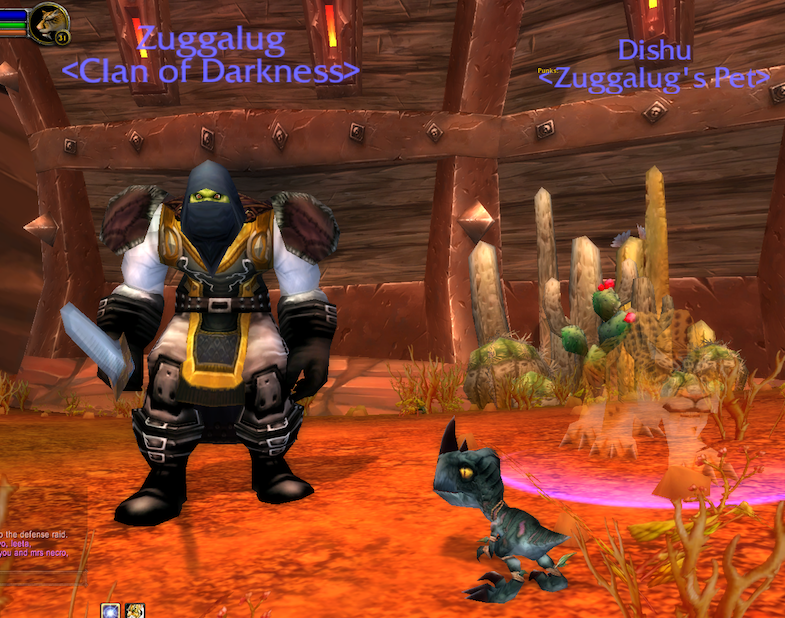 
Sent from my iPod
Kurly

Greetings CAW Crew - Aprillian, Tedrah, El-Jeppy, and Ashayo
This is Tiber-Clan of Darkness, (Tiebur on U-stream)
As I promised last week, here is an update of my adventures in Azeroth.

After I was admitted into Clan of Darkness last fall, I was inspired to try a rolling Recruit-a-Friend with my two permenant accounts, and two temporary accounts.  While I was doing that, Brewfest started, then along came Hallows End, and then, the new Darkmoon Faire launched.  I was like the proverbial cat, in a room full of rocking chairs.  My RAF result fell far short of El-Jeppy standards, but that's okay, I had fun, and I decided that spreadsheets are for work,  not for play.

I was probably the only WOW player that was sorry to see the old Darkmoone Faire go away.  Playing not only many Alts, but also on many servers, the Faire was key to my casual method of financing my scattered operations.  The Faire vendors sold Herbs, and Gems at far below AH prices.  I generally only bought items that I could mark up at least a 100%, and gradually sold them through the rest of the month.  By the time the new Faire began, I mostly had the vendors to myself, but before the start of Wrath there was fierce competition, with some players (or bots maybe) seeming to camp the vendors 24-7, and world PVP breaking out frequently.  One of my favorite adventures was stealthing my low level rogues over to the opposing faction's Faire on PVP servers, and seeing how much of the goods I could make off with.  That's a real good way to learn the limits of stealth in game.

I was pretty apprehensive when the changes to the Faire were announced.  I though my gravy train was gone, until I cast into a shipwreck debris while doing the Darkmoon fishing quest.  Now I'm not only auctioning the contents of the sealed crates from fishing, I'm also gaining levels, and leveling professions.  So change is good after all!  I still miss stealing the other factions loot though...

I got to participate in the AIE Rememberence Event that Ashayo described two episodes ago, for the first time this year.  It was a really unique, and solemn in game gathering, and a reminder that all these outlandish creatures we see around us when we play represent real people, with real lives, and real cares.

I wasn't able to attend the Attack on the Alliance that Ashayo described, but I like to think I helped pave the way.

On 3 August something more than fifty of us rolled blond blood-elf paladin guys, joined the Beefcake Bronie guild, and wearing nothing but our pink guild tabards, launched an assault on the Alliance.  After forming up with our crack level 85 escort team we made our way from the starting zone to Garrosh's throne room, where he told us "You will serve the Horde or be crushed beneath it!"  Suitably motivated we ran accross the barrens, until we encountered surprisingly strong opposition at Northwatch hold, and were wiped out, along with our escorts.  Rezzing beyond Northwatch  our guardians hacked a pathway through Theremore so the herd of level 2's could run to the ship to Menethil Harbor.  After landing, our pink stamped thundered across the Wetlands, through Dun Morogh, and into Ironforge.  Many deaths later we all had tickets on the Deeprun Tram, destination Stormwind!  I'm sure Garrosh Hellscream was proud of our blond, pink clad assult team as we charged out of the Tram, and into Stormwind.  I think our final moments were a lot like the final scene of "Butch Cassidy, and the Sundance Kid", only a lot pinker.

I'll give my narrator a break now, and wrap this up.  I'd just like to say that nothing puzzles me more than the people who moan "I'm so bored" in trade chat.  There are so many fun things to do in WOW, that I don't think I'll ever have time to do them all, and Pet Battles haven't even come out yet!

For the people who still find fun in the World of Warcraft,
Tiber

Hi CAW crew and or guest host lets see well this week I saw the new MOP trailer and it was awesome kung fu panda here I come as I write this I am less than 24 hours away from heading back to Esperance and my PC I have missed it I wonder if it misses it's daddy. Went to Perth got the all clear on the cancer check talked to a specialist and he told me he has no idea whats wrong with me so 4 months of blood tests then back to Perth to see if that sheds any light on my medical issues. I got some new drugs to take and they are not the type you swallow I have found when you take off the wrapper they hurt a lot less. Guild wars 2 is out next week so I will be giving that a look thinking of playing a big kitty rouge got informed by a truckie that rugby league and rugby union are two different sports and grid iron is not rugby in body armor he also informed me that if I wasn't so big he would have hurt me. Because of the drugs before the op I had to let my mother drive me around and that was truly frightening to make it up mummy brought me a knife for Christmas it's so pretty. Had to stay with my grandmother while we were in Perth she made it quite clear from the moment I walked in that she was not pleased with the hair choice and mocked and insulted me the whole 2 days I was their but thanks to you guys her insults failed to land a killing blow. Also saw Abe Lincoln vampire hunter it was quite good mainly the lack of sparkle on the vamps helped a lot well that and the great axe work.

and for the West coast Pirates arrrrrrrrrrrrrrgggggggggg
Big G

Sorry for the lack of audio lately but with my morning recording times not available at the moment and working at the warehouse all last week I've had literally no time to do any recording, not even to put one of my own shows out this past week!

In Wow stuff, I pre-ordered my copy of the regular version from the local video store who only require a tiny initial payment and you are guaranteed to get it on the day and the cheapest they've offered it including before and on that day. I've not had a great deal of playing time either. I got hooked on playing some Wolfenstein - Enemy Territory http://www.splashdamage.com/wolfet/ which is pretty addictive. My first plans for MOP is to go for loremaster on my main Pryderic the undead mage. It'll probably take quite awhile but I think it didn't take more than a few of weeks of my spare time to get the Cata Loremaster.

Anyway, hope your all well and catch up with an audio for next week!

Hope you are all well and having a wonderful week.

Please find attached my audio for this week - sorry the quality is a little off tonight, I think I need to adjust my headset and stop heavy breathing down the microphone or something lol.
Will have to have abit more of a play with audios I think :)

Have a great show tonight and I will catch you all in-game soon!

Almost forgot to send one in again, because of your time recording this week, so very last minute!

Just sending in a quick WoW update as we finally relax after our show. We had a standing ovation all but two nights, and everything went awesome. Except the night Morgaine's parents came and I ripped the seam of my pants during the show. For the rest of the run I made sure my underwear matched my pants, haha! It was super awkward watching Morgaine kiss two different men on stage, but that's one of the sacrifices one must make for theater.

Morgaine's week in WoW: Wren ran my Warlock through Ramparts to get her a few quick levels (since I HATE Hellfire). We also played a little more on my disc priest with his death knight. Been transmuting Airs like nobody's business and finally updated our WoW blogo.

Wren's week in WoW: Started leveling my alliance toons again, hoping to get them all to 85 before mists hits. Lowest leveled toon alliance side is my level 64 rogue, then my level 79 priest and shaman. So this looks very possible. Other then that and helping Morgaine out little time to play as we wrapped up our show.

For the Horde, For the Alliance, For the "Holy crap, a day off that I actually have no plans?!?!"