I've put an audio in the drop box for you, and here are the links I mention in the audio...hehe... love ya!! 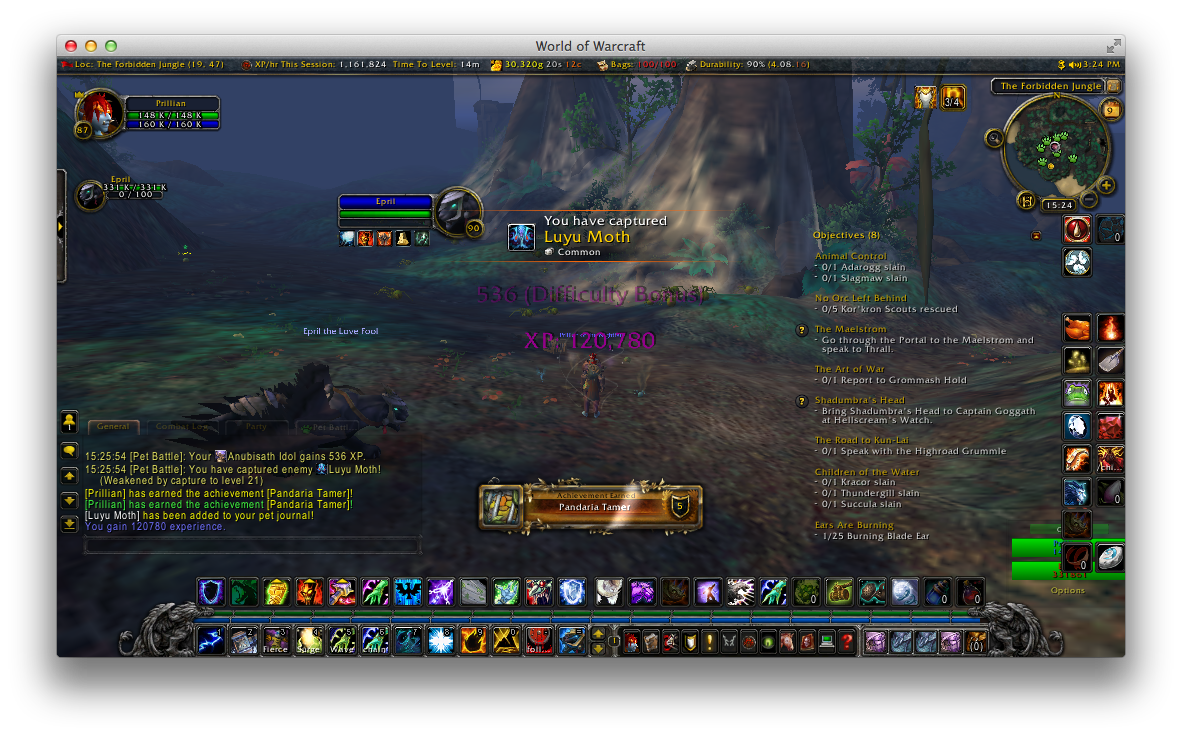 Second account trying to catch up!
Dying after removing from battle
[Anubisath Idol]
Motes of Harmony

Melee Druid even worse over wireless. Maybe latency is why I dislike melee?

Not as fun playing on small mac and no addons

Yo! For the show.

Firstly apologies for once again being absent. I am currently having the NHS try and turn my frown upside down. From the rather gruesome video they showed me this seems to involve a hammer and sticky tape! I am assured it is for the best though.

The heat here continues to be a problem. As mentioned last week the spontaneous combustion of elderly folk has left blackened tweed stains all over the high street. I have found ice in the banana hammock keeps one cool though if somewhat artificially shrunken.

As promised to Big Steve and others I have tried to do something other than pet battle this week. This has included some monk levelling. I have to say that the monk is becoming my least favourite class. Just not really getting the hang of it. I will persevere though. I do like rolling and the flying kick is great of high places. An event for the Azeroth Olympics I think.

I also did a bit of PvP. Not in battlegrounds but over on my old PvP server. Talk about your pixelated hellfest!! I forgot just how hideous the experience can be. I did however get to see many new and exciting graveyards so mustn't grumble.

Of course pet battling did take place. I grabbed a crow and glow fly from the Darkmoon Fair. I also headed out to Thunder Isle. Have to say being back in a place where pretty much everything can kill you adds spice to life. Coming out of a battle to find yourself being bore down upon by a T-Rex certainly gets the heart pounding!

Ok well I will say goodbye for now. Hope you have a great show and I look forward to listening.

Leeta
Darkmoon Faire - one of my favourite Events
16 toons - level professions mainly
DMF Tamer - Jeremy Feasel - one shot him everyday except yesterday where he was rather nasty and took me about 9 times to finally get him - no pet from bag yet!!
CoD Raiding Friday night - with Matahorn, Pontis, Kittyfox, Danarra, Kurly and Zikar
Onyxia - no mount
Sarth 3D 10man - mount went to Danarra
Pixie and Juuno joined our Skype call - was great to hear & chat with them!
Serpentshine Cavern - Mel and 42 joined us
Attil - Tillers Rep - Dark Soils
Isle of Thunder with Aprillian
Solo Raiding with Leeta - Kara - no pet or mount, Temptest Keep - no pets or mount
Kael’thas is a difficult boss to solo as the mechanics are still tricky thou took me 3 times to get him down.
Beasts of Fable - finally started on these - smashed Lucky Yi but no luck on the other ones yet!
Pet Battles - best addon to get PetBattle Teams
http://www.curse.com/addons/wow/pet-battle-teams 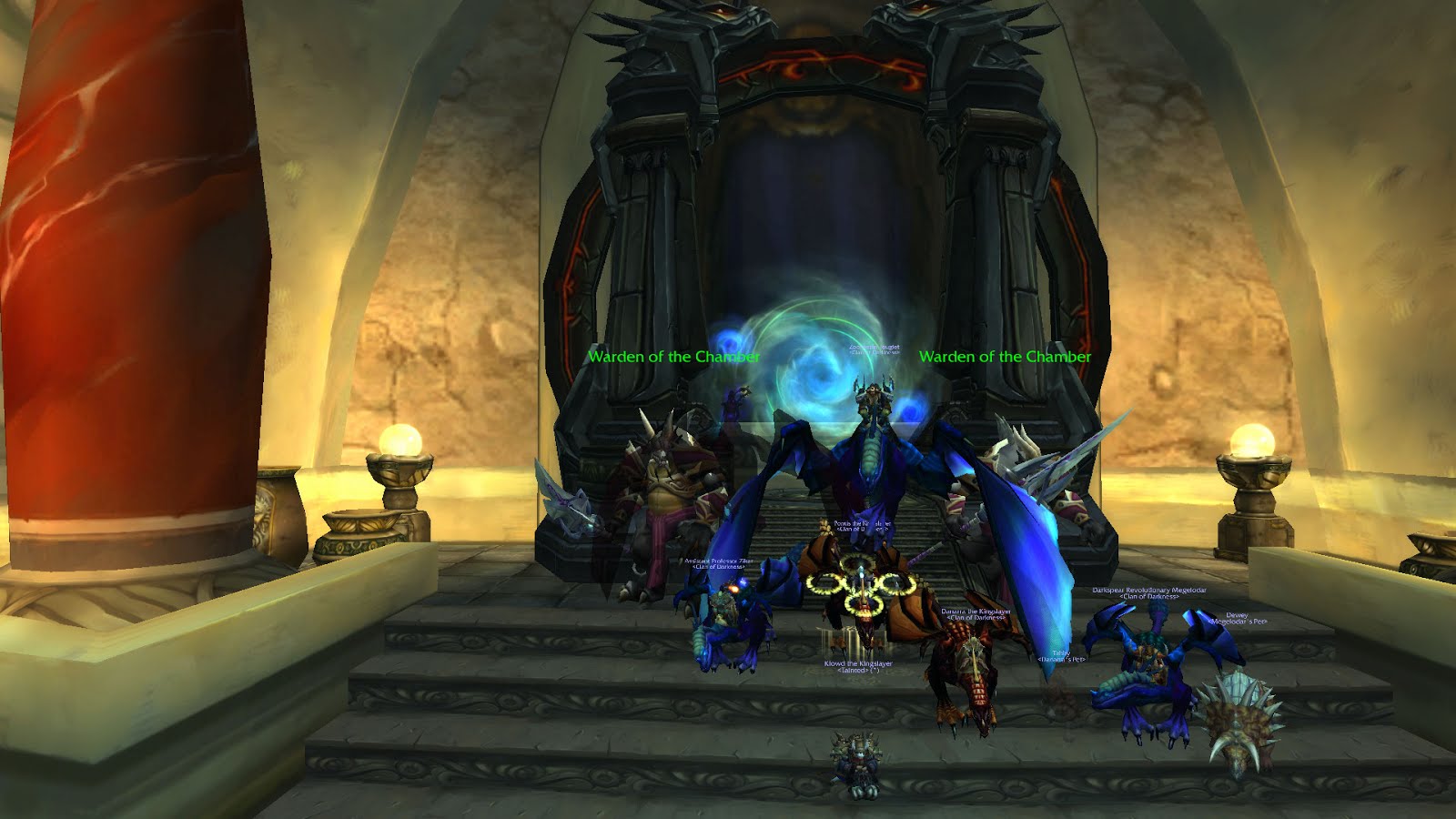 Clan of Darkness Raiding Photo
Strumpet
Yes, PB/s but have also been doing some other stuff
Helvette has pretty much turned into my main -
LFR - afraid but I go in and do my best - past the loot in the ones I’m queuing for
Today - Nightmare of Shek’zeer! Heart of Fear
explanation vs blame
Scenarios with Molsan -
Thunder Isle
Incantations of Deng
Dilemma about weapon
Double Agent quest
Strange things at Argent Tournament
Mountain panda! (greyhoof actually!)

I know we have not sent in very many submissions in quite a while, so you may have forgotten who we are. We are InMyOwnDreams, or "Dreams" for short, and her hubby Kithore.

We will try to send audio more often - it just happens that life has been quite the roller coaster ride for the last year or so...

As always, we hope that everyone is doing well in game and out of game!

Sorry not much to report this fortnight awesome time to record by the way. Here’s my audio
Big G

Greetings, all!
So, I'm apparently not good at organizing myself to submit every single week. Oh well - I do what I can. :)
Here's an audio of what I've been up to the past couple of weeks.
Later,
Maggrathea

This week's submission has been a last minute thing, i almost forgot,
cause i wanted to get as much as possible in, and i just now realized,
that if i don't start doing it now, it's going to be to late, and we can't
have that, so, i hope you enjoy it despite the lastminute effort.

Sorry no audio yet, didn't think you'd be recording so soon. I do have a few parody songs bouncing around in my head, but between actually playing WoW and theater haven't had the time to record it.

In the past few weeks both I and Morgaine leveled our CoD toons to 90, yay first level 90's horde side! I also leveled a few other toons to 90, mostly so I can start farming motes at halfhill. I've gotten back into the living steel market again with my characters on Kael'thas. It's good money whenever I find a good "unload" time.

Achievement wise, I got the Zookeeper title, which was very fun. Have like two or three captureable pets left to go. Then I get to start collecting the argent tourneys etc. It's a lot harder since I have no collector editions except mists.

I've gotten my friend Alan back into the game, and me and Morgaine have been leveling new alts with him. At some points I need to convince someone to log on Nevikhoof to add morgaines newest alt to the Ctrl Alt WoW Guild.

Anyways, thats been our last few weeks in WoW, I promise to get you a new song in the next few weeks, Grease Rehearsal has been kicking my butt.

For the Horde, For the Alliance, for the "Does anyone else find it weird that Eugene is older then Miss Lynch?"

PS: Whatever it is, It's Leeta's fault.

PPS: I've started work on creating a home arcade machine with my wii, since I never use it for anything else.


Clan of Darkness
Hey gang! Had to get this in early! You all have a great weekend!