Aprillian, Vrishna, BigG, Tedrah and Marzana discuss another week of playing World of Warcraft, Blizzard's greatest MMORPG. The show features audio segments and email submissions from our lovely listeners.
If you want to join the conversations on the show, we have a live chatroom with in-game giveaways moderated by chatroom-chick Tedrah. We record every Saturday at 6 p.m. EST / 8 a.m. (Sun. Australia’s time), on our Ustream page! http://www.ustream.tv/channel/ctrl-alt-wow-world-of-warcraft-podcast
We also have an ongoing contest. Send an email to ctrlaltwow@gmail.com telling us how you play WoW, either as an altoholic or dealing with it in your family life to being placed in a drawing for a WoW Pet or an Authenticator.

Sorry for the absence...I'm on Spring Break! Hehe. Happy Easter!

Happy Easter! And yay for Noblegarden soon!! Here's my audio for this week! 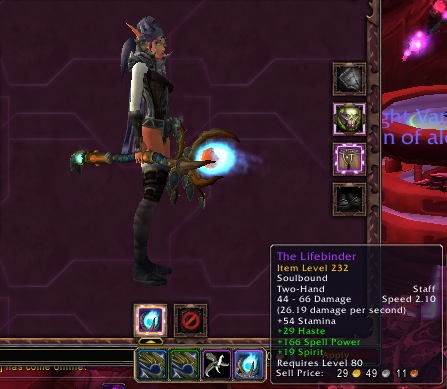 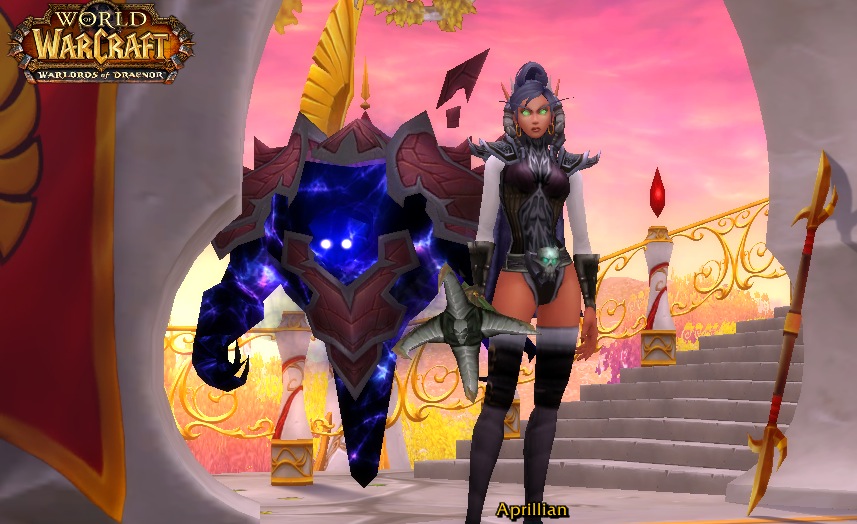 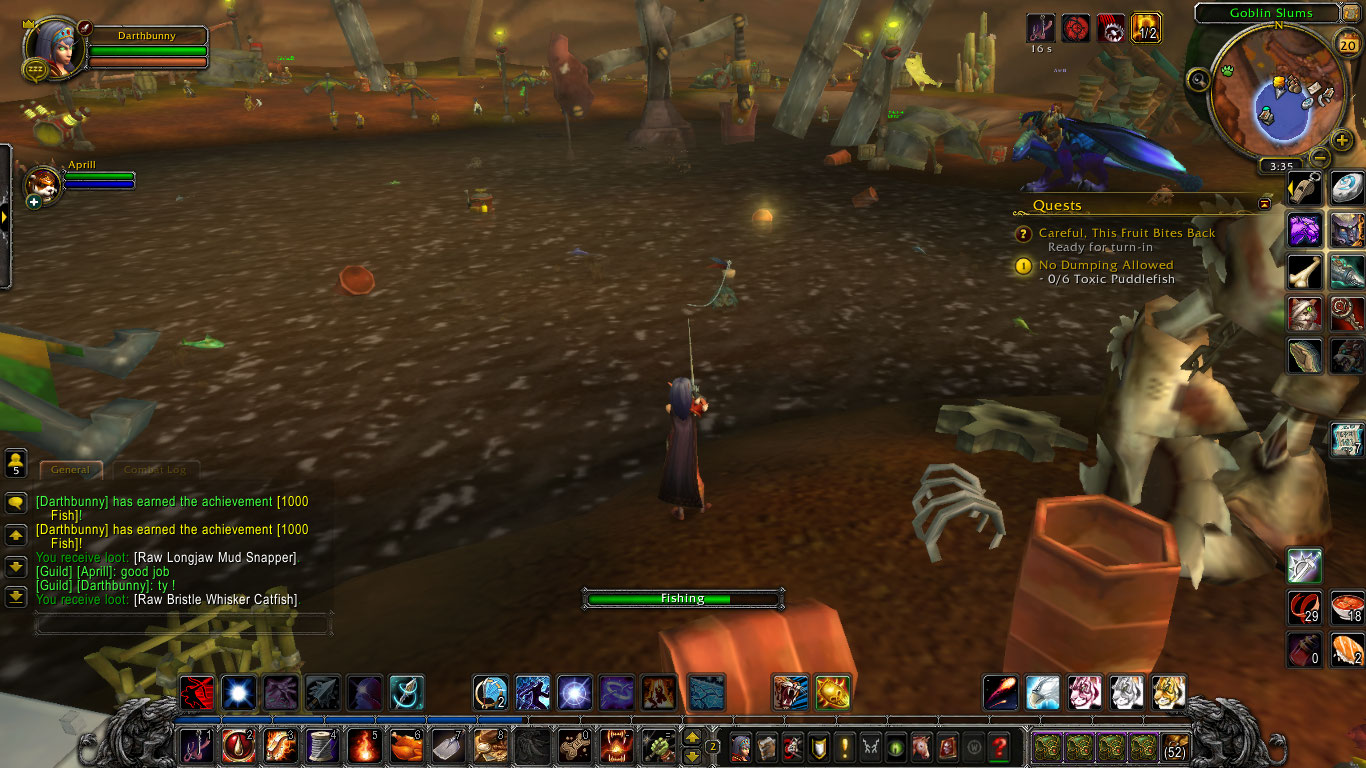 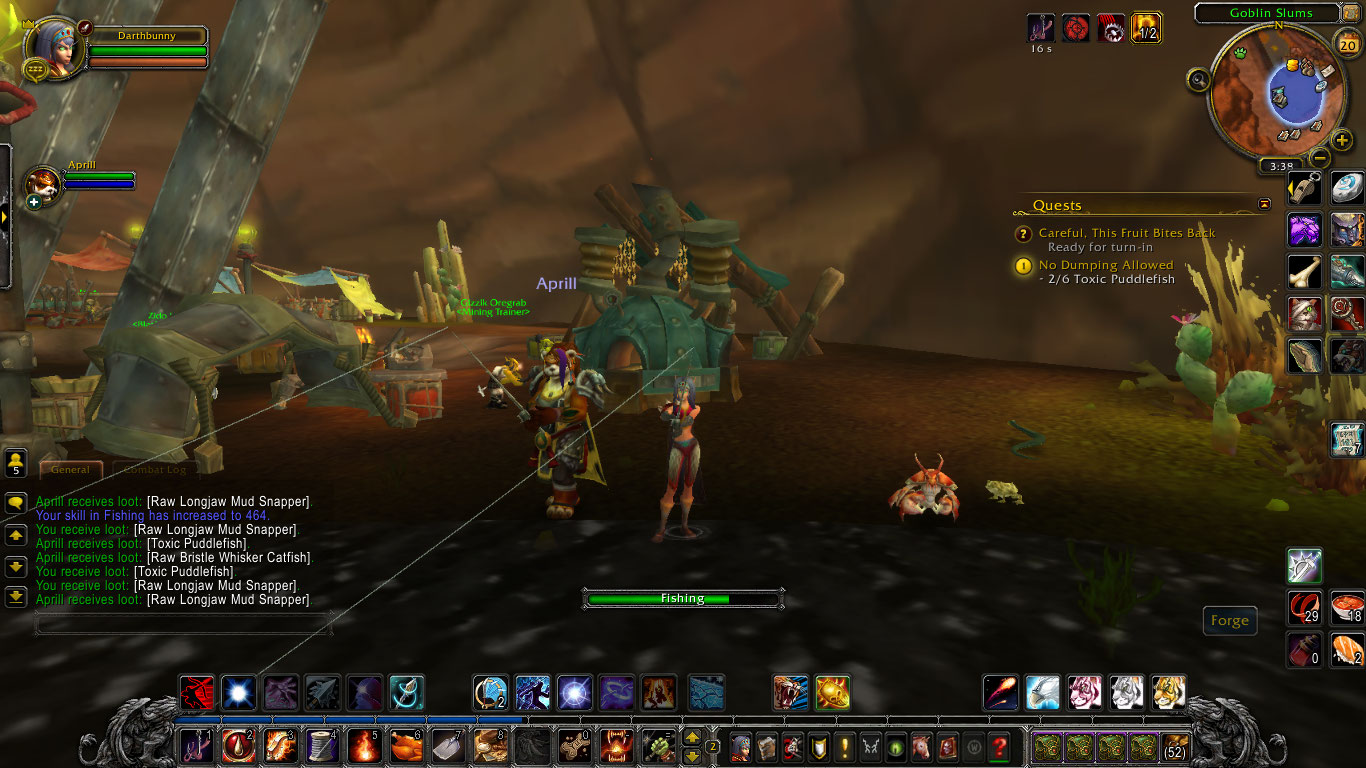 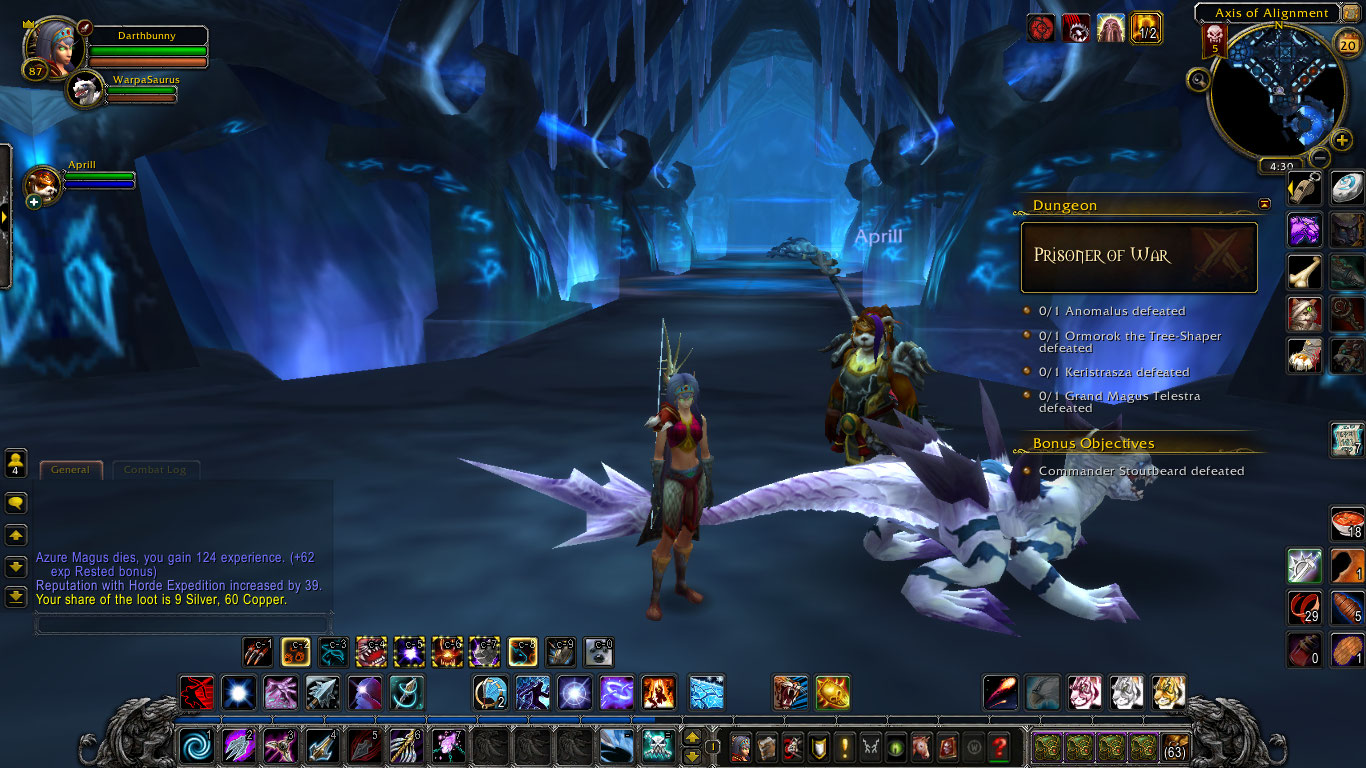 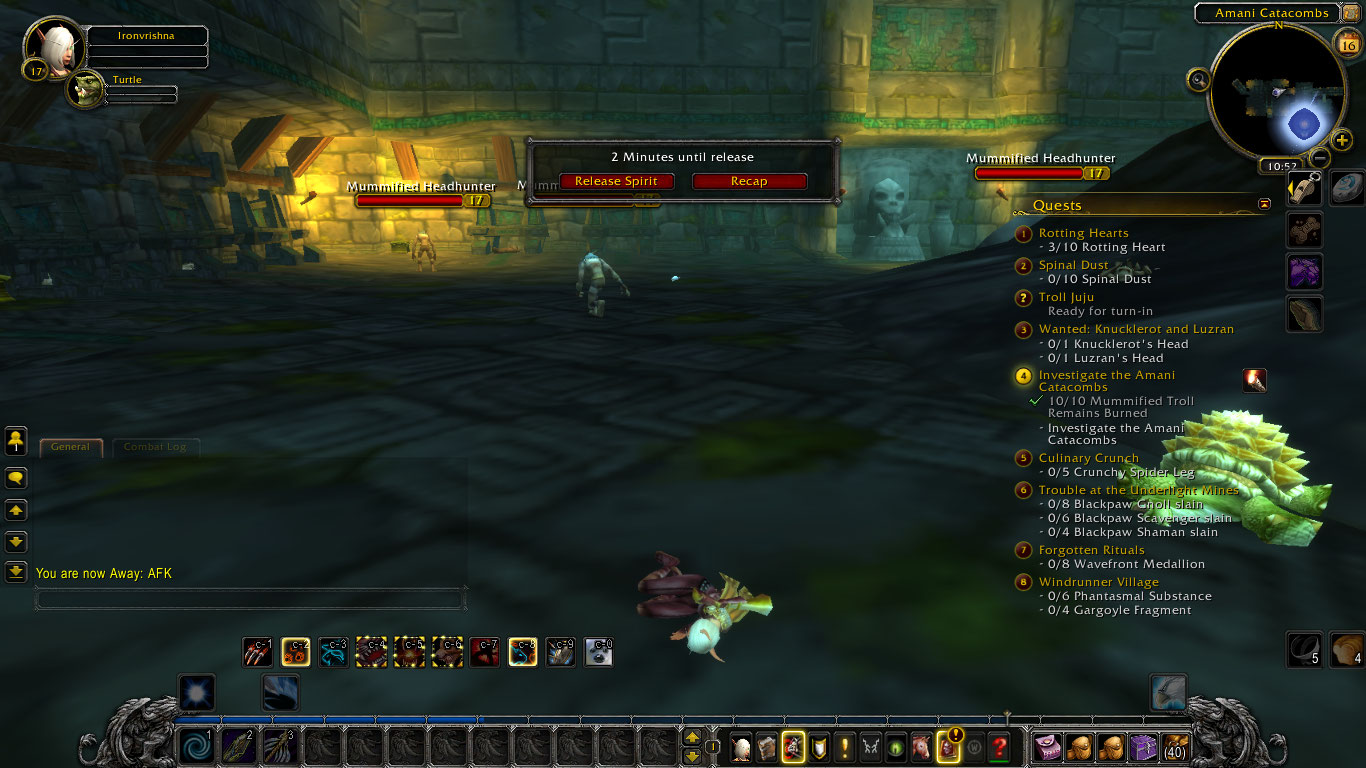 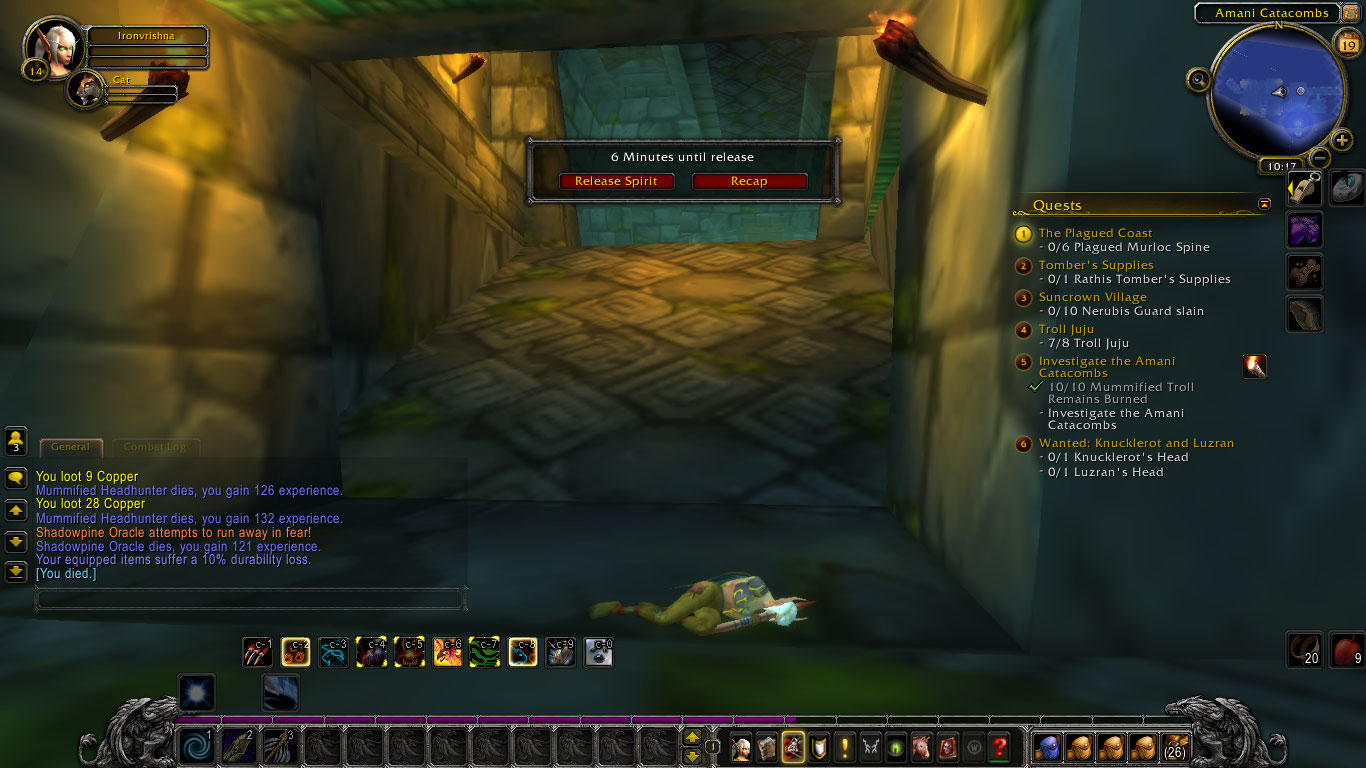 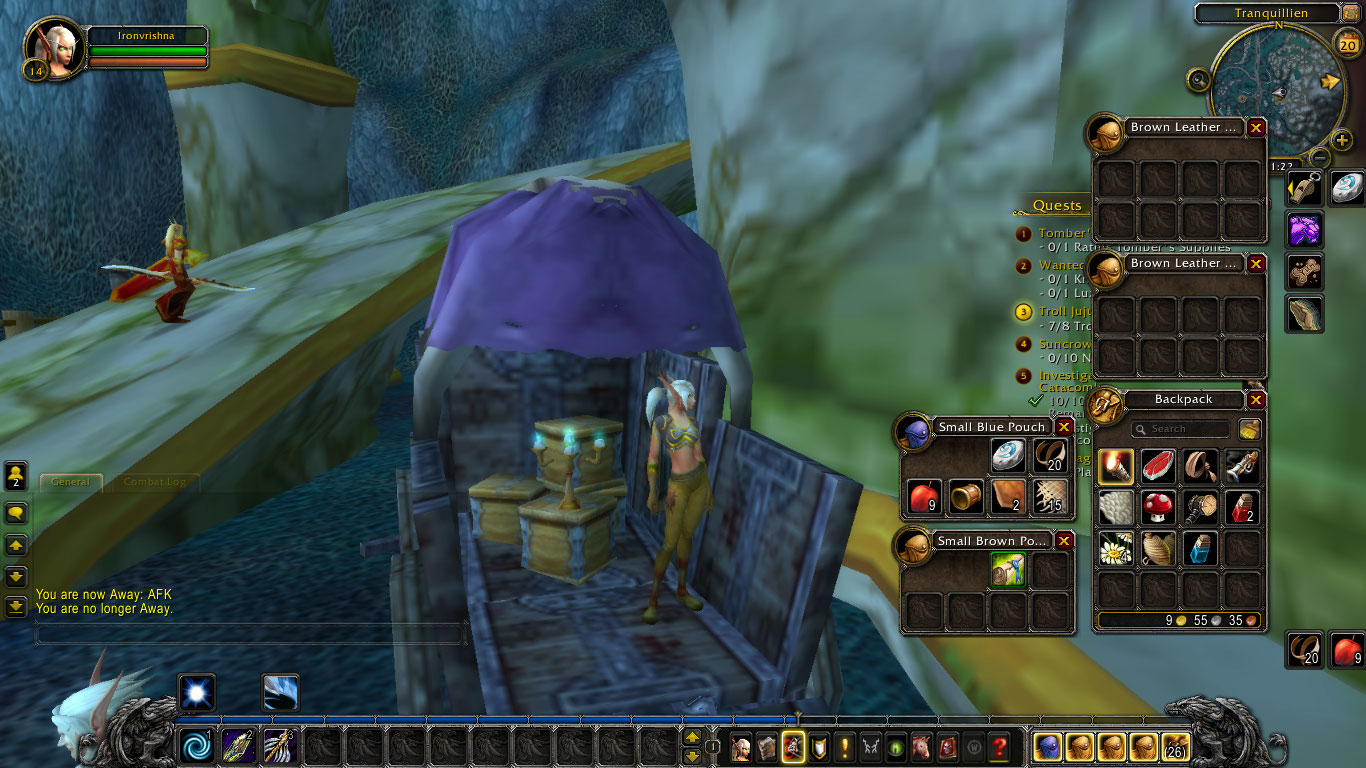 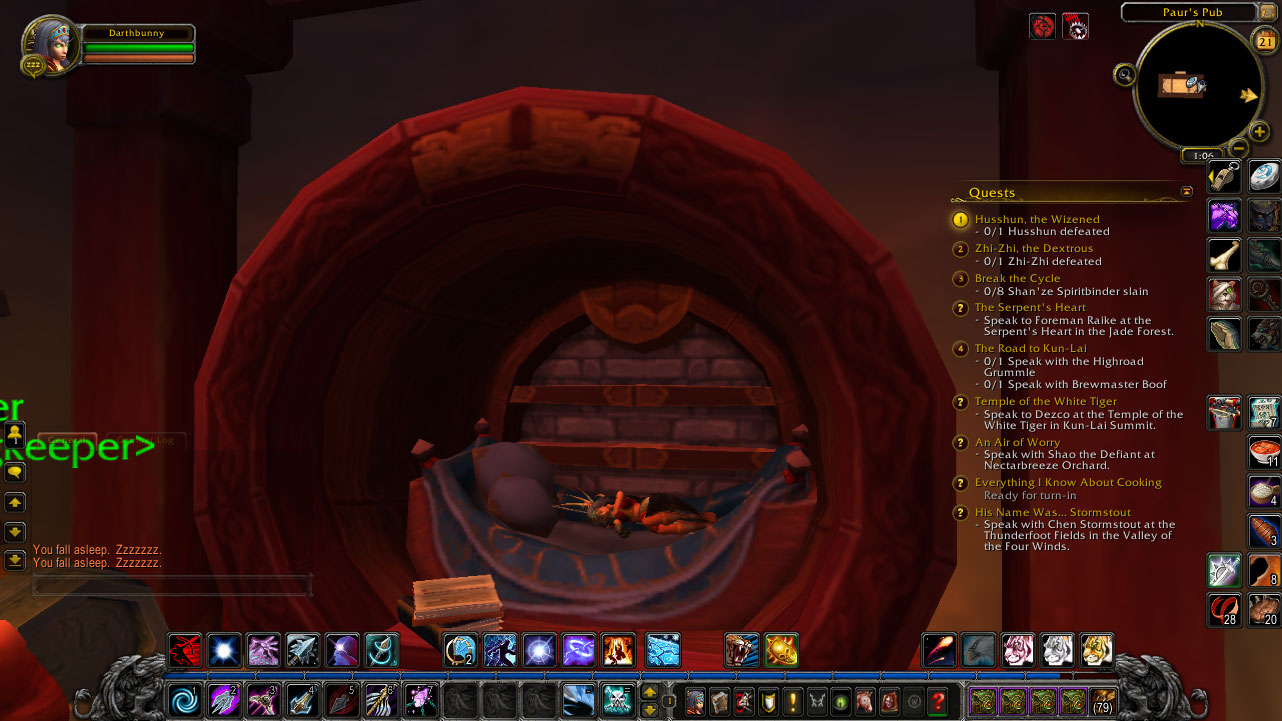 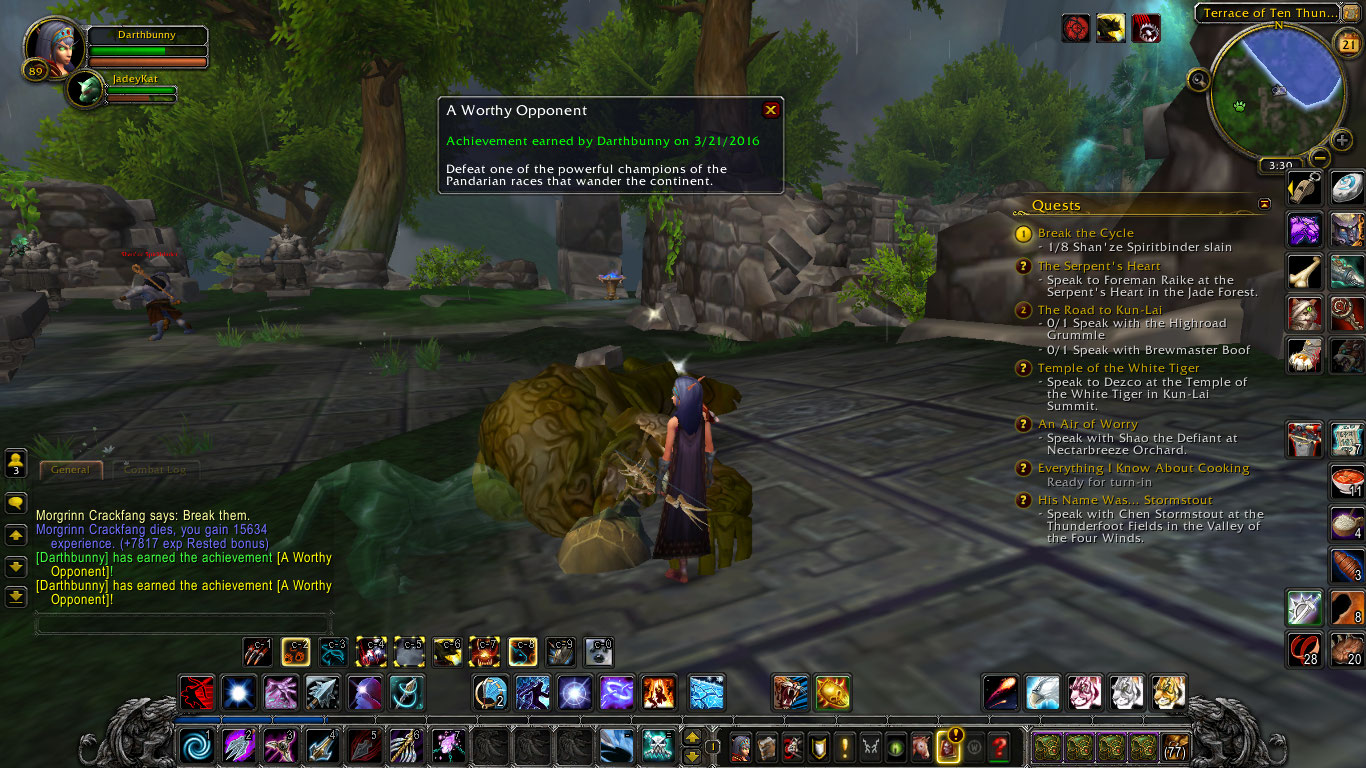 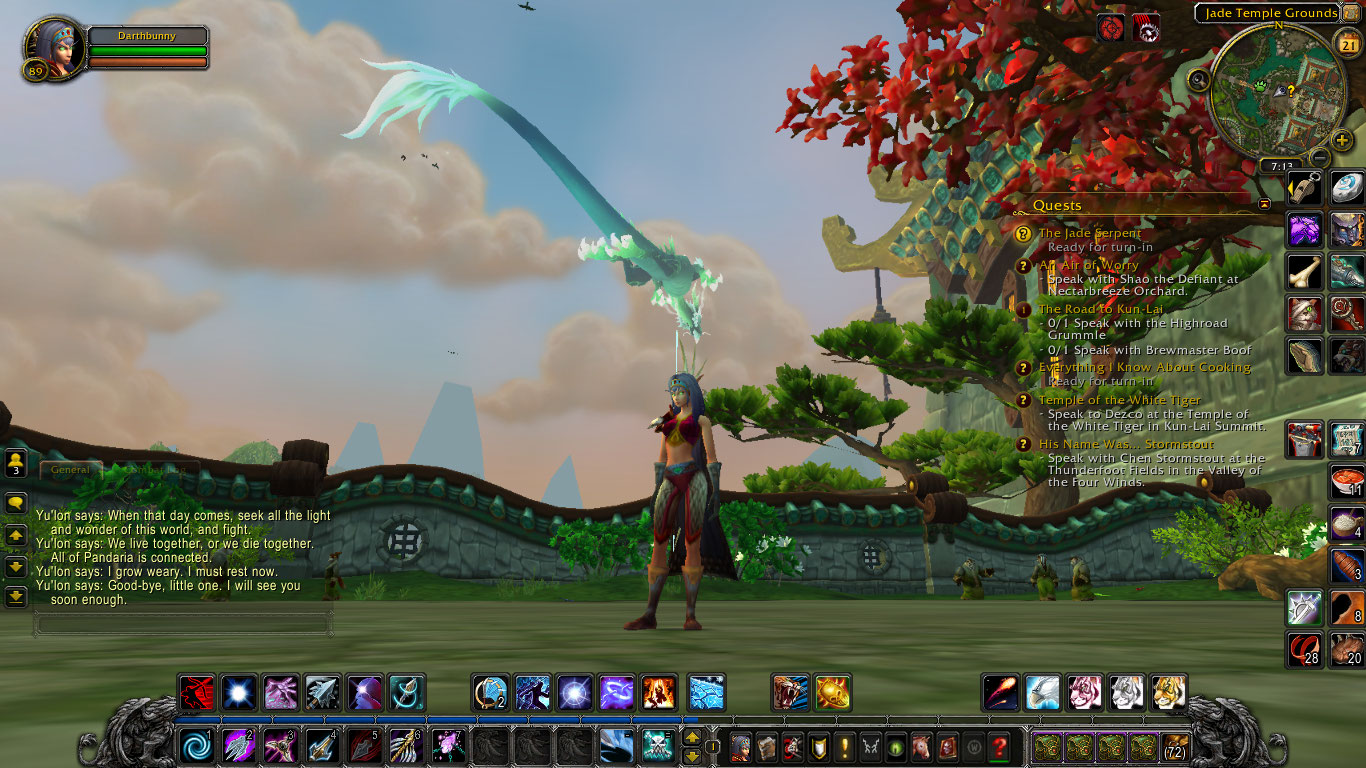 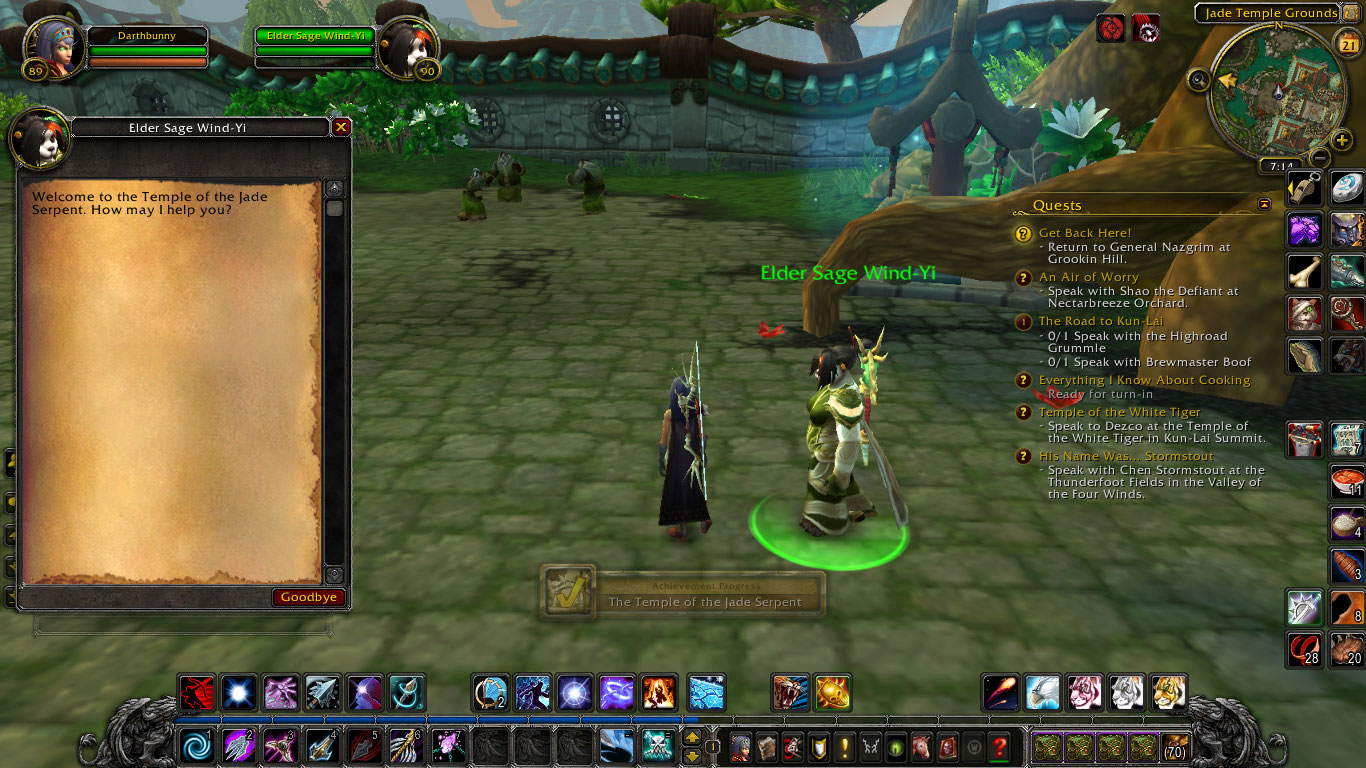 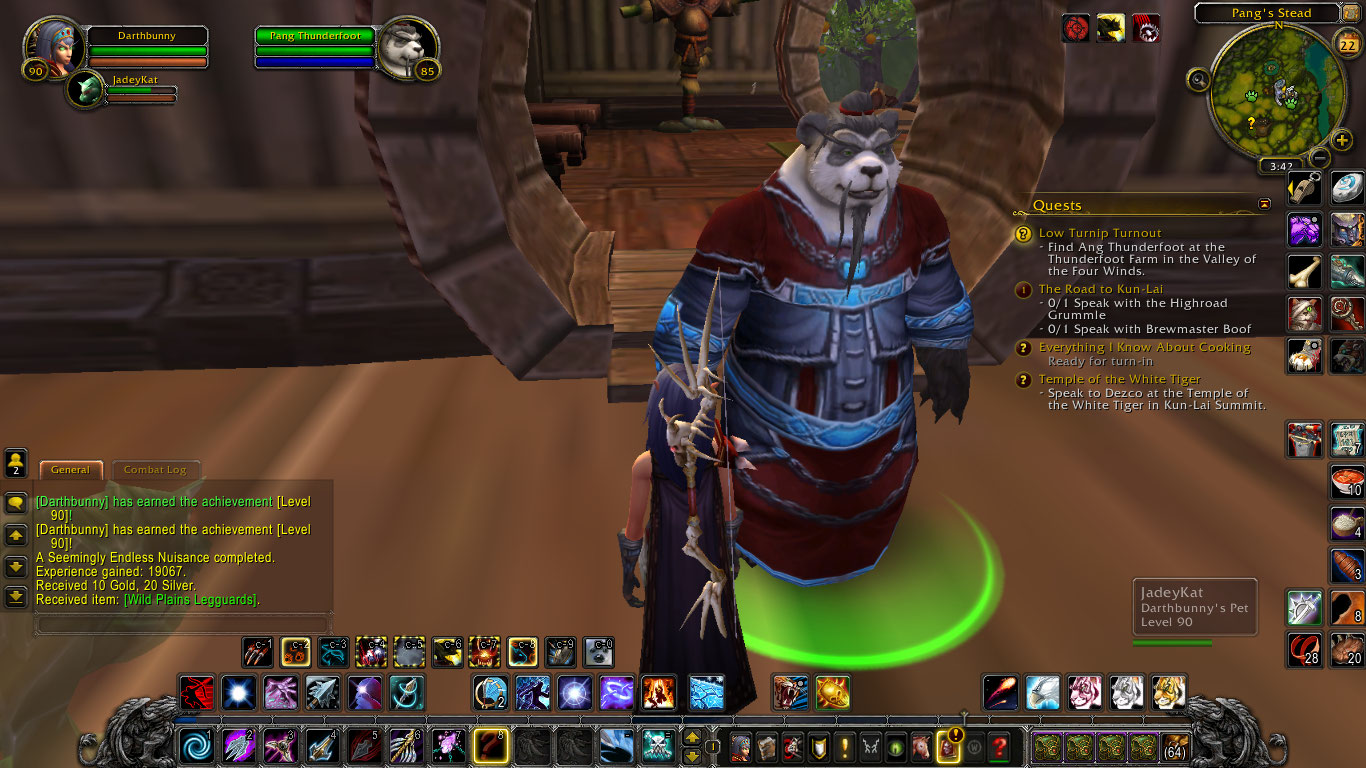 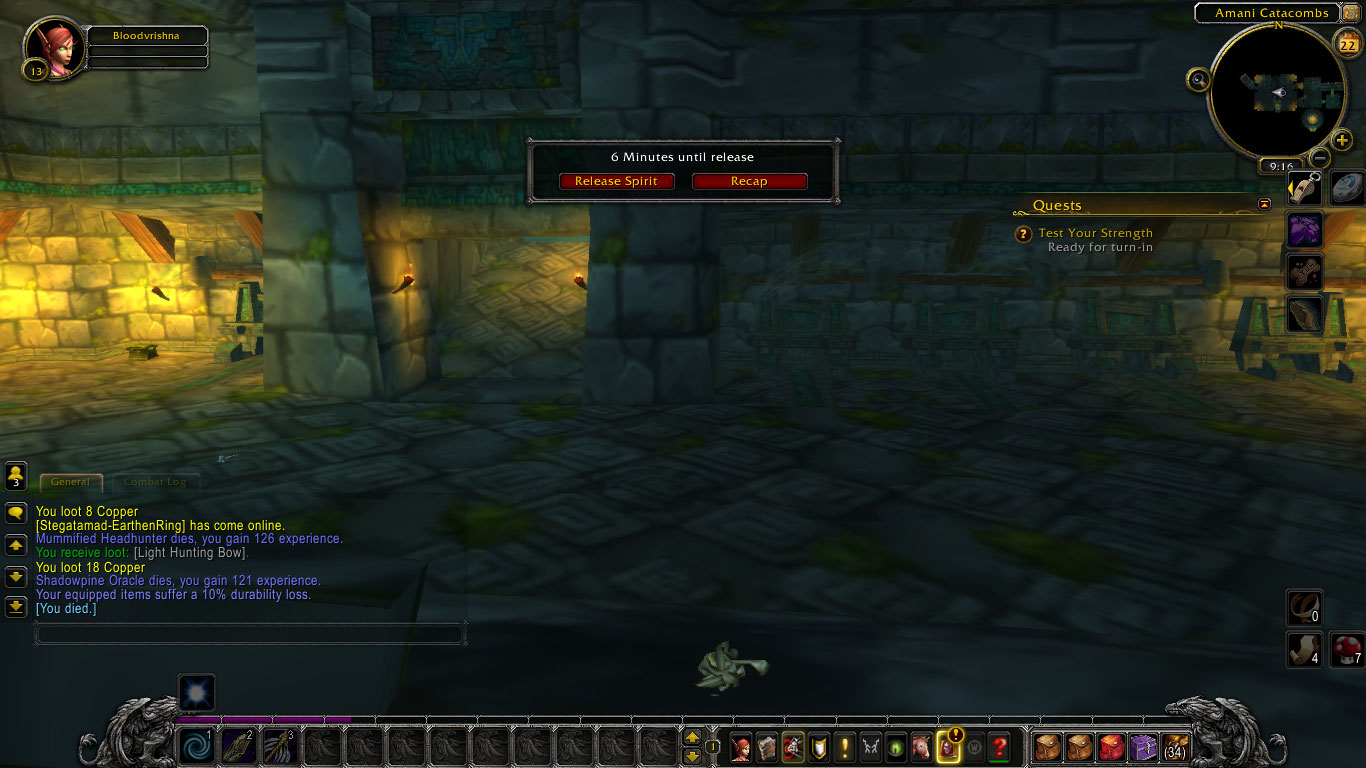 Boosted a pandaren hunter and started to equip her LW / Skinning

My week in WoW (and out of it too)!
Hello again CAW Crew!

It's Saeureon (or just 'Sae' if you prefer :D ) again, hoping you're all doing quite well! I was going to send in a voice submission this week, since it was mentioned I can do that now, but sadly I just couldn't find the time (or a working mic for my computer!) and so I'm left with writing to you once again.

So my week has been a busy one, and I didn't have as much time to dedicate to my endeavors in Azeroth as I had hoped I would. I still got some things done, though, so I guess it all worked out. I leveled Boulderhoof, my Iron toon, a little more and he now sits at level 23 while I decide where to level next. I wanted to continue through all of Azshara, but I started a questline that involved killing Night Elves and after managing to accidentally pull 6 mobs at once and very nearly losing Boulder in the battle, I figured I should find some new stomping grounds.

I also went and made a new toon (just a regular one, not a challenge toon) after listening to last week's episode! I thought Vrishna's 'Friday Night Noobs' idea sounded like so much fun, but I sadly don't have a level capped Horde character, so I challenged myself to try and see how fast I could get one to max. I created Saeureon the Blood Elf Paladin, who currently sits at 36. I'm hoping he'll be 40 or even close to 50 before the end of tonight. I was actually really surprised at how much fun I was having playing as a paladin, as I have a level capped one I barely touch these days. Maybe this will convince me to go back to my poor Alliance pally someday and give him the love he deserves. :P

I'd love to say that I did so much more in WoW this week, but I unfortunately got busy at work (I work with taxes, so this is basically GO TIME at my job) and I'm fairly certain my wife and I will be painting most of the rooms in our new house sometime this weekend. If we do, I'm hoping she'll let me take a break long enough to come enjoy your show live for once, lol!

I'll not keep you any longer and I hope you all have a very spectacular week!


My week in WoW
Morning Aprillian, Vrishna, Tedrah, Jeppy and everyone else who is listening to the show.

I'll say it now...long time listener, first time writing in and I want to say I love your show, I always make sure I listen and do try to catch the show live, but Saturdays in my house is crazy!!

Here is a little bit of information about me.

I'm name is Shinn I'm 39 and i'm from England and have been playing WoW since just before BC  came out and I love this game and the people who play it!

So my week in World of Warcraft has been a busy one, I have lots of alts to sort out as I have two accounts, one EU and one NA. Over on the Eu account I've been working on getting my 4th lvl 100, right now I'm 98 and the way I'm leveling up is by flying around doing pet battles. Its not the fastest way, but I'm trying to level lots of pets up to lvl25 so i can sell them on the Auction House. The daily quest that you get from the Menagerie can be tough, so I've been trying to get the right pets to win each fight. Its taken me nearly 3 weeks to get there, but this week I'm pretty sure I've got a team that can win most times. Also if you go to Tanaan, there are these pets that you can fight called the Tiny Terrors and I found these really hard, but I now have a team that can beat all but one of them.  If anyone wants any help with that let me know and i will try to help.
On the rest of my toons I'm doing Garrions missions and gold making, which I really enjoy! I know Jeppy is into gold making and the advice he gives out is always sound! Gold making has been slow this week due to most of my time doing pet battles, but I'm at around the 1.3 million mark and my plan is to get to 2 million by Legion.

My NA account is quite new and only have a couple of toons, one level 100 and a level 28. I haven't done very much this week, so not much to talk about. I have made a new toon on Earthen Ring and was hoping I could join Clan of Darkness as you guys and the people who write in or you have guest on your show seen like the kind of people I want to play Wow with. So can I please have an invite?

Each week GrandNagus takes a closer look at some of the most useful World of Warcraft addons out there.
You can find GrandNagus on Twitter @GrandNagus1, or by email at towerofcommerce@gmail.com

Time Flies When You’re Having Fun

Trying a 24/7 chat app for guildies to join and just keep in contact and have chats with during IRL :)
Also has a voice channel just like vent/mumble! And very easy to use! :)

Join the live chat-room on Ustream