Global friends lists (thru Battletag). Friends on different continents are identified by their continental tag before their names.

This is, according to Blizzard, only the first step, where billions of players worldwide can make friends and play together.

What do we think about that?

Will that eventually extend to a global WoW with no more regional restrictions?

According to the list of origin and target realms for free realm transfers,

that service ends on June 15, so on Monday it will be ending.

After that the normal costs will apply again. 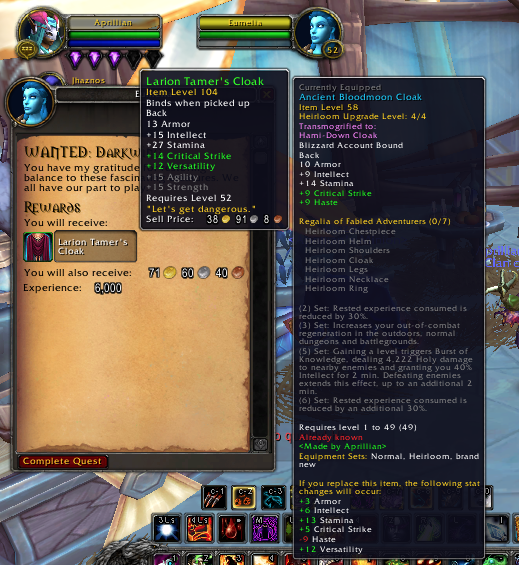 Spending time doing Callings in Shadowlands.  Killing rares.  Doing Court of Embers.  Getting whee! Buff from Darkmoon Faire to increase Reputation Gains. Eye of the Jailer seems to have harsh repercussions when you have a legendary equipped, less than 10 minutes to reach rank 3.  Went to Molten core, Pandaria, and Grizzly Hills for a quest in Oribos to have new decorations at the Ember Court.

My Forsaken Priest is now 69, only one more level to go.

I finally bought fast riding for 510g and an epic mount for around 83g both numbers with revered rep discount.

Farming rep in the various dungeon hubs and zones.

The first zone i’m going to have done will be the Cenarian Expedition in Zangarmarsh.

That means that i can then buy the first of my four (4) heroic keys that are used to unlock the heroic difficulty of that respective hub, in my case Coilfang Reservoir with Slave Pens, Underbog and Steam Vaults in it.

You need all those unlocks to attune yourself to be able to run the Karazhan Raid since some of the attunements are, if memory serves, done on heroic difficulty.

So far i’ve had luck in getting a very good shoulder item from Old Hillsbrad.

I did also get my first piece of dungeon set gear, Hallowed Raiments, so I'm really happy that I’m ready for level 70 with the Hallowed Garments.

I love the fact that they put in dungeon sets for each class in TBC. These are the set bonuses:

(2) Set : Gives you a 30% chance to avoid interruption caused by damage while casting Binding Heal.

(4) Set : Your Prayer of Mending heals an additional 100 health.

To buy the TBCC Digital Deluxe Edition or not to buy it?