Aprillian, Ashayo, Virshna and Jeppy discuss another week of playing World of Warcraft, Blizzard's great MMORPG. Contest Ongoing send an email to ctrlaltwow@gmail.com telling us how you play WoW, either as an altaholic or dealing with it in your family life to being placed in a drawing for a month free of WoW or a $10 iTunes Gift Card or an Authenticator.

Hello darlings! Shoot...I just checked twitter and saw that you're recording tonight! I won't have time to get an audio done, and I won't be home to join in all the fun... <=( Today is April 12th...which means it's the 2 year anniversary of my Dad's death...so we have some stuff planned for tonight. I'm so sorry I'm missing you all AGAIN... I'm attaching the disco song for the chat room though, in case anybody needs to disco dance...hehehe... Great big, giant hugs full of love! Juuno =) p.s. Please send me some positive vibes...I am sad today...<=) What We've Been Doing:
Aprillian
Did podcast and forgot to turn in AT on Astarå and Tiiaa

Bountiful bags perk means more infinite dust, which is just in time for Astarå last Enchanting levelling push
So Aprillian made items with all the glorious Frostweave she's been getting. also made some bags. Had a ton of Rune cloth so made some Rune cloths bags for guild.

Astarå got to 425 Enchanting. The next day she got to 450, she's de'ing stuff Epril made while levelling JC
Monday Astarå got to 470 using the 5 point levelling

Played Rift on MT, Kudos to Ralffie for helping me out. Made a youtube channel:
http://www.youtube.com/Aprillianme 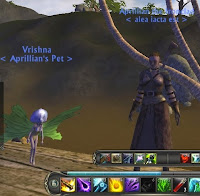 Brishna and Treilana do Wailing Caverns and Gnomeregan. At level 29.

Hi,
I just thought that I'd write you something for your contest, although it's pretty mundane.

I play in a pretty awesome guild on Sisters of Elune named Unbroken.
A few of us good friends founded it and are all still in the guild (although one of them wanders off now and then, but she always comes back).

We do some decent raiding, have done most of the content up to the new raids. The main focus is raid progression, at the moment, but many of us do have a fair bit of alts that we like to play. To that end, I followed a couple of your more longtime listeners over to Earthen Ring to hang out. They got me into a Skype call with another long time listener, Sarah, and we all chatted while I started up a new DK as a goblin. It was pretty fun playing a goblin as I've never played a smaller race in WoW. I think Earthen Ring will be a nice vacation home for my alt. It does suck not to have access to my heirlooms and gold though. They said I should join the guild they were in, but that I needed to contribute something to the podcast. Then I saw there was a contest so it seemed like two birds, one stone.

Anyway, thanks for reading!!