Aprillian, Vrishna, Ashayo and Jeppy discuss another week of playing World of Warcraft, Blizzard's great MMORPG. Contest Ongoing send an email to ctrlaltwow@gmail.com telling us how you play WoW, either as an altaholic or dealing with it in your family life to being placed in a drawing for a month free of WoW or a $10 WoW Pet or an Authenticator.


Took Beastie and Relaq mining for iron, trying to get Relaq's BS up. Discovered quite a few toons with low level BS. We did Ferales. At first Beaste couldn't mine because her mining was too low. Then I got the bright idea to check what her level was and she was just 5 points from mining iron and only needed to smelt some silver ore, which Relaq had. 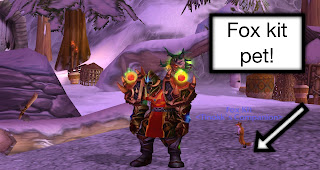 
In gratitude to a guildmate

Hi guys, Thanksgiving  is over and Christmas is almost here so I would like to share with you something great that happened last night. After a really crappy double shift I came home and hopped on to WoW so I could decompress. So I'm cleaning out my mailbox and starting the quests in Thrallmar and chatting with guildies when I was whispered by Shalick and invited on a run thru what's that dungeon's name right by there? Whatever that one was (I've only recently tried dungeons and am not good at them. Hopefully practice will improve proficiency), we went, and on heroic no less. I spent my time looting, that is after I figured out that I wasn't high enough level to make an impact on the fight( it was a dew minutes spent spamming keys while thinking "Why do my spells keep missing the target? Lol) and as soon as I realized I was supposed to grab as much loot as I could(sweet boy, that Shalick), I went and aggro'ed a big and nasty, and found myself laying in a heap. With my new friend and our lovely guild perk "bring a guild back to life" I was back in the game, off to robbing the dead once more. Well things don't always run smoothly with me, so while trying to be a greedy cow, Kharma ran up and smacked me. My mouse froze. So here I am, with 1 job to do, and no mouse. My keyboard worked, but I am stuck. What did I do you ask? Well I did what I do best, I started swearing creatively. That didn't work, so I tried to punch buttons hoping to open up chat, to let Shalick know what was going on. When that didn't work I panicked. I restarted the game, found Shalick( did I tell you he was a sweet boy?) who welcomed me back, and finished the dungeon. That's the nicest thing that's ever happened to me in game.
He helped get me to lvl 60 and let me keep all the loot!! How awesome was that?  Thanks Shalick for putting up with me. This is the best guild EVER!
For the horde and for the guilds! Moonah
Sent from my iPod

This is Shandraya. You don't know who I am so let me introduce myself . I am the daughter of Mel and Fortytwo from the night shift.

I am a  hunter but on the good guy's side with the alliance but I do play sometimes play on Mum and Dad's toons . I love to play in Battle Grounds and I enjoy  organising the correct strategy in the   battles . I like to imagine the reaction of the other players in the BG if they were to discover  I am only a 14 year old girl and I am telling them what to do  and that sometimes we even win  because of my advice   !!

First  I would like to explain social dilemma I have ...  I play a computer game that my parents play and My biggest fear is that my Dad will talk WOW with my friends... Well to my story . We were in the car a few weeks ago  and Mum was making us all listen to a podcast called Cnt Alt Wow and of course I was  not listening. Then I heard Mum and Dad's voice discussing WOW, not in the car , but on the podcast. They were in the part you call the COD piece. MY PARENTS. The embarrassment, the shame .

Well once I recovered my composure I thought I must get my revenge ( in a nice way) for the  embarrassment they caused me , because I am their daughter.

This is it.  Would you  please wish  Mel, 42 , your good selves  and the other  listeners and their children   a Merry Christmas  and a happy new year from me.

I do love the podcast but please don't let my parents talk again as I can't take any more scares like that.


PS I totally agree with the guild philosophy . Do not kill bunnies and I enforce that policy in our house . So if Mum or Dad kill one they answer to me!

My Week in WoW Episode 1

Another week another submission! I made notes this time, they can be found here.

Keep up the great work!

Saulius
PS I meant to ask, did Virisna get round to playing Shamus?

Good morning Aprillian, Ashayo, Vrishna and Jeppy, greetings from the other side of the world.

It was great week in WoW for our Death Knights, Prospero and Kallisto. They have been death gripping their way through Outland on a steady rampage toward Northrend. Things were speeding along nicely until... they arrived at the dreaded "Blood Ring" in Nagrand. Since they'd had no trouble with any of the quests or mobs thus far they decided to give it a go. Needless to say they got their belf butts handed to them by the first elite boss. (Hmmmm, maybe they really meant the "5 player suggested" thing this time)
As they were wondering what to do about this a Blood Elf Paladin named Rhin, offered to help them by healing as they bravely battled.  Six elite bosses later (and with some help on the last "surprise I can rez myself" boss from Rhins friend Amiss) they completed the quest. Thanks Rhin and Amiss, Its moments like this that make the game so much fun.
The quest reward was the mighty (and very sexy looking) Honed Voidaxe. So with new uber weapons in hand the intrepid pair raced their way to level 67. Tonight we hope to reach level 68 and then on to Northrend where more legendary adventure waits.

Cheers and best wishes from the Necronomicons

and remember Undead love is forever.


PS
Transmogging is fantastic, we've been in Outland for two days and upgrading our gear the entire time and we don't look like we belong in a clown car. Thank you Blizz!

Hi Aprillian, Vrishna, Ashayo & Eljeppy!
Unforunately, I didn't get round to doing an audio this week.
What I've been upto:
I've barely been in Wow this past week though I am keen to crack on with my DK and I want to abandon the quests I have outstanding on my level 72 mage so I can port him to Origammar and pickup the Call To Arms Quest. I've got several Karazahan bits of gear so I might do some transmogging but my evening gaming availability is non-existant at the moment so I'm not able to do any old raids with my EU guildies.
Other than that, I'm late getting Christmas stuff all setup and will be cooking and decorating tonight while your recording.

I'm also up late tonight as I've been invited as a guest on show at 3am GMT which will hopefully go well though it's my first time on a podcast.
I'm on holiday from the 20th and home for 4 days before heading up to Glasgow, Scotland to see the mother-in-law on Christmas Eve so fingers crossed I actually get some Wow time in!
Until next time...
Cheers,
Rigarmorty


Update from Caoboi and Iceflow


First of all, we want to say that we hope Jeppy is doing better and we miss him bunches.  CAW isn't the same without him.

We are so glad that we are able to send an update with what we have been doing.  And I thought I had an update for you last week.  Well I'm not sure if that can compare to this week's update!


Last Tuesday, Muerten (aka Prodigalsun) invited Caoboi and I on a LFR run of Dragon Soul and The Fall of Deathwing and we got all of it done within a couple of hours.  The content is seriously dumbed down but you still get the achievment.  We think it's funny that we beat Deathwing and we haven't even beat Ragnaros yet!  Caoboi even got a couple of pieces of gear.!  A lot of rogue gear dropped but I had to compete with too many other people and didn't get anything.  There were 25 other people, after all.  I love that Blizzard is still finding new and fresh ways to present content.  I had a blast!


And Muerten even did another favor for me!  To start the rogue legendary quest, you have to pickpocket the fourth boss in the new Dragon Soul raid.  He was so nice that he let me sub in on his ten man at the fourth boss to pickpocket the boss.  Then I  started on the quests after the pickpocketing.  They actually force you to use your stealth, distract, and sap skills in that one!  I got two epic daggers for my trouble but, sadly, the next part of the quests required 333 items that I would have to get my raiding.  I've hung up my raiding hat so that's as far as I go.


I've finally realized that the raiding phase for Iceflow is gone so I am no longer a raider.  But there is plenty of other content for me to enjoy.


While fishing at the Dark Moon Faire, Iceflow actually fished up the Sea Pony Companion!  It only took me about 100 to 150 casts!  It's super cute.  Caoboi got his as well even though his took about 1000 casts.  But he was persistent!  I did the dailies as much as I could but I probably won't get all the mounts and pets I want for awhile but I intend to keep at i!


You are a lazy sod for following people to get to the Dark Moon Faire, Aprillian, but it's really cute anyway :)


Iceflow is still plugging away at Tol Barad to get the pet and mount and still at the Argent Crusade trying to get my badges for the mounts.  Let's just say it's going to take awhile.  But I'm nothing if not persistent.


Well I hope you all have a wonderful time in and out of game.  Bye!!

No audio for another week

Sorry for the lack of audio again but the curse has continued to kick my arse it struck this week in the form of some localised flooding and the loss of four of my brothers cows. Due to road train and rain we are now 4 cows less I recived the info on the place I wanted to rent today also so I can now try and move forward on the gaining of a rental property so I am now closer to the self imposed exile from the game and internet.

And for who ever has laid this curse upon me seeks me out so I can introduce them to my collection.