Aprillian, Grand Nagus, Tedrah and Kameo discuss another week of playing World of Warcraft, Blizzard's great MMORPG. Contest Ongoing send an email to ctrlaltwow@gmail.com telling us how you play WoW, either as an altaholic or dealing with it in your family life to being placed in a drawing for a WoW Pet or an Authenticator.

Hello darlings!  I was running late this morning, but here I am & here's my audio! 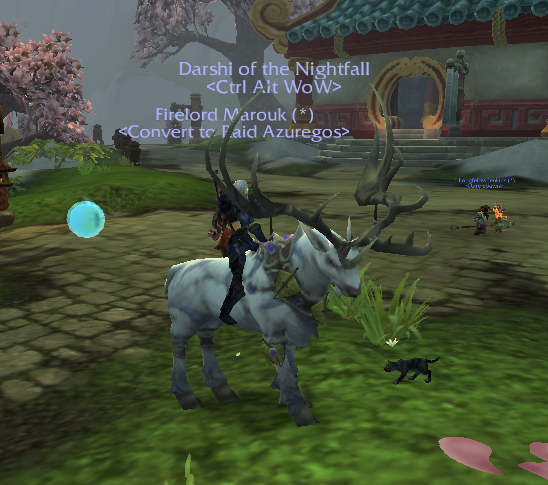 - Redoing all my Ark Inventory settings
- GOT A REAL ID REQUEST FROM A GOLDSELLER!!!
-Calls to Blizzard

-THE VALLEY OF FOUR WINDS:

- Both encounters with the celestrials so far, didn't produce any loot, DOUBLE GOLD!!!

-LFR SoO I: 2 pieces dropped on regular drops, 1 piece dropped on a bonus roll, total of 3 pieces from 4 bosses + 1 Titan Runestone from the SHA OF PRIDE.

Tedrah
Did flex raid Friday night with Unbroken guild on Sisters of Elune. We downed the first two bosses and made good progress on third.  I got new boots - yay loot. Saturday I tried the proving grounds. Managed to complete the bronze level - took two tries.  Silver is definitely more challenging. I’m not a very good player so going to take some practice.

Control-Alt-WoW Gang!
Hail and well met!
So, the Timeless Isle.  Well, I have to say, they’ve done a very interesting job with this one.  I think the quests are …ok. The discovery type quests aren’t as fun as I thought they might be, to my point of view.  Now that we’re into the second week, we get to recycle some of the quests from the first week and kill more stuff for stones and such.  Plus, there’s that Rep Grind with the Emporeror…5 ot 6 or 11 rep points a mob kill. Wow.  It did go much, much faster in a group of five random folks from AIE.  It was uplifting, by the way, to get a random invite from a guildie just because of the tag over my head.  (The funny part was, at one point there were two AIE groups in the area working, and it was one of those ‘Slay them all, let Ordos sort them out..” moments.) I’m also very pleasantly surprised to see Clan of Darkness folks here and there on the Isle!
What has the Isle done for me? Well, in the week before the patch dropped, I actually got a second character to 90.  So, now both Wolfbrother my Paladin and Eranth my Hunter are 90. I ground out the most of the last 5 levels by dungeon, and doing quests while waiting for a dungeon queue.  That said, Wolfbrother went to the isle first, collected a bunch of Timeless Mail armor pieces and sent them to Eranth.  So, Eranth hit the ground running with all purples save his rings, trinkets, neck piece and weapon.  Since then I’ve been collecting lots of leather with Eranth, picked up a ring and neck piece, and upgraded my weapon to the one you can buy with Timeless Coins.  That gets him to about iLevel 488.  About the only thing I see useful for Wolfbrother on the Timeless Isle is for him to collect Timeless Coins so he can get enough to buy those curio’s that upgrade a Timeless Isle armor piece to 533, since most of his gear is in the 502 or 522 range.
I’ve noticed that a number of those wonderful chests that you find about the isle (not the Moss Covered ones), will respawn for you each week to re-loot!  I don’t think I’ve seen any gear from them, but there’s gold, coins and so forth.
I anticipate that the leather market will make a huge decline, since there’s more leather available for skinners there than should be legal.  I was surprised to wake up to find my mailbox full of gold from leather auctions that sold.
There was some hope that we’d see some interesting patterns drop for leatherworkers on the Isle, but I have yet to see one.  Being a fresh 90 still, I don’t have much more than PvP blues that I can make as far as leatherworking gear.  I hope that changes sooner than later.
I’m a bit amazed by how well the phasing is working on the Isle.  The zones that you’re phasing in can’t be more than 50 or 60 meters/yards across.  Mounted up  you can see a bit of lag in the zoning if the Isle is busy on the server(s) you’re on have lots of folks in the zones you’re moving through.  However, the lag hasn’t ever been enough to really cause a problem.
With all these things going on with the Timeless Isle, I still have to work Eranth through the Legendary quests with the Black Prince! I need to queue for more LFR, I suppose.
I’m looking forward to the show.
“Be well…”
Eranth / Wolfbrother
AIE – Earthen Ring
lion.man@att.net

You all know what time it is... Come on - everyone in... It's group huggles time!!!  /squee :)
Hope this finds you all well and having a wonderful week!
It's been a fun and busy week in game... killing and looting! ;)
Can I just now say... I LOVE LOVE  LOVE  Timeless Isle!!!
Been busy killing rares and doing rep and gearing up alt 90's and getting coins AND even managed to smack that Little Tommy Newcomer with his Lil Oondasta pet!!! \o/
Although still no luck with the Pet Battle Scenario I am making headway into working out what works for some fights and what pets I NEED to level!!
If anyone has had any success with getting through the whole thing let us know your secrets!!
Also remember Brewfest has started so Ram Racing is back baby!! Heehaw!! hehe
Anyway Brewfest has been one of my fav World Events so I've included the WoWhead link for those people interested in checking it out!
http://www.wowhead.com/news=220216/brewfest-2013-guide-september-20-october-6
Well that is all for me this week!
Have a great show!
Lots of love and big huggles
Leeta xoxo

Hi everyone! The attached audio sums up my week, and also has a few words of wisdom from Voltandra and Everrose. Here's wishing everyone continued good weeks, in game, out of game and everywhere.  Enjoy!


Clan of Darkness
Hey Gang! I'll be doing a Cancer Charity Bike ride with my family during recording time so have a great show!!!!
Take Care,
Donnie

Posted by Aprillian at 9:41 PM