Ctrl Alt WoW Episode 377 - Out With The Flames, In With The Feasel!

Wow what a great, awesome Friday night! Had so much fun and even better learned a lot, Wingy, Ashayo, Grand Nagus, Leeta, Cloggy, Pontis, Tiber, Duvessa, Winslow, Moonie, Danarra all went. We did the first two wings of LFR, and let me tell you what a difference it's makes when you have 3 awesome people with you that knows the fights! And has the patience to explain everything in a very clear way, so thank you Ashayo, Wingy & our awesome Cloggy :)
I got the nerve up to try LFR with my mage Kiche and went all by myself last week, then dragged Pontis with me later that night. We did the first one Vale of Enteral Sorrows which wasn't too bad, but the second one Gates of Retribution was terrible! The tank pulled everything down on top of us, and of course we wiped and then the yelling started, Pontis and I left. The next day got Danarra to group with us got him some gear and ran the first wing again, and again was okay.
But doing all of this with guildies is just so much more fun and having awesome people with you that knows what to do and takes the time to explain is just so much better! :)
So this coming Friday Wingy, Ashayo have agreed to run us through the last two wings and I'm very excited about this. So come join us and have some fun, plus get loot and maybe even a sigil or two, got to get the Legendary Cloak before Warlords of Draenor comes out.
Anyway that's been my week lots & lots of fun!

Hugs & Kisses
Pixie & Junno
For the horde & Clan of Darkness 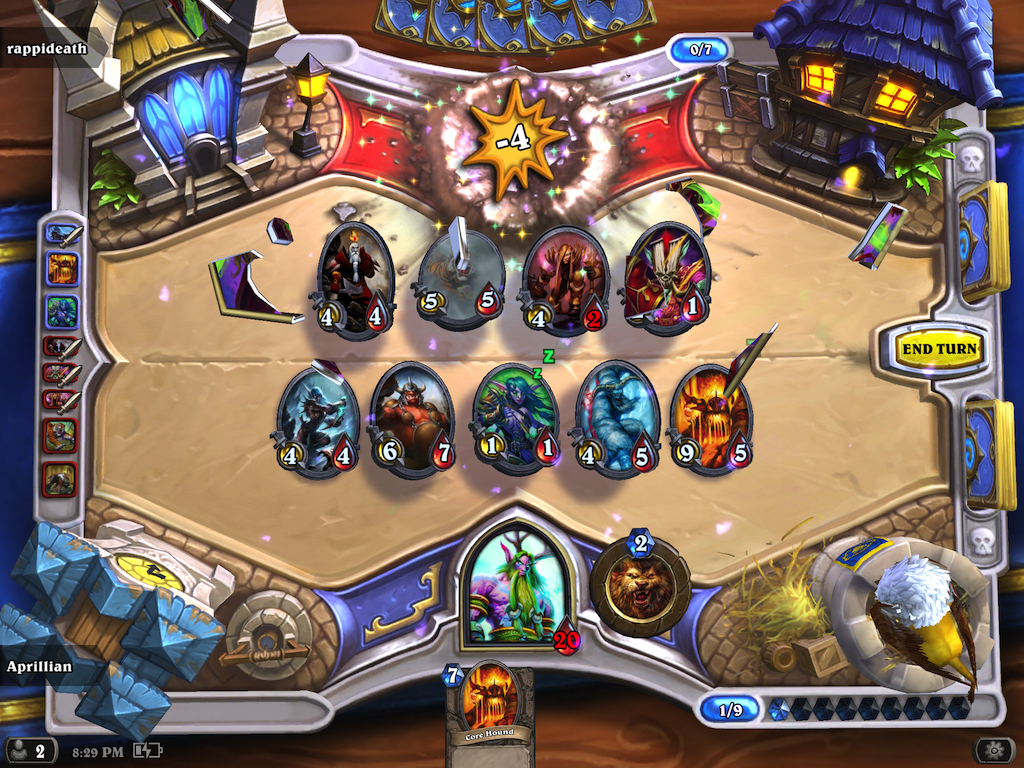 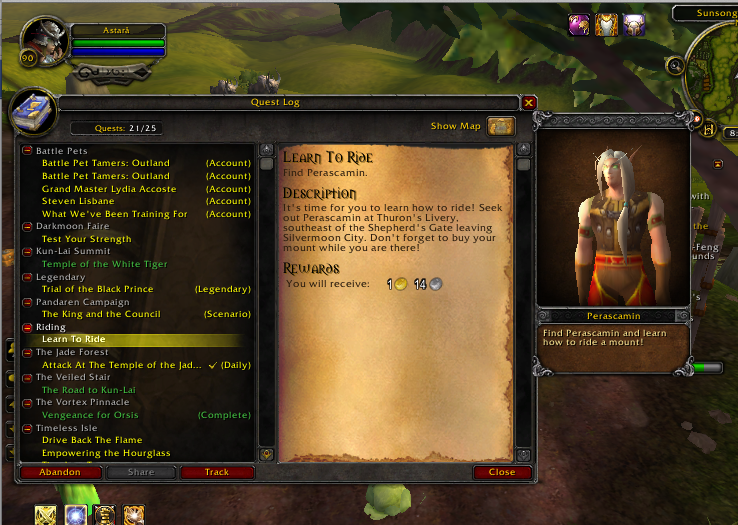 1/ Healers - Paladin Lvl12 - 17
Did RFC with Wingy, Ashayo and Matahorn a few times to catch up on some levels and then Ashayo and I 2 manned it! 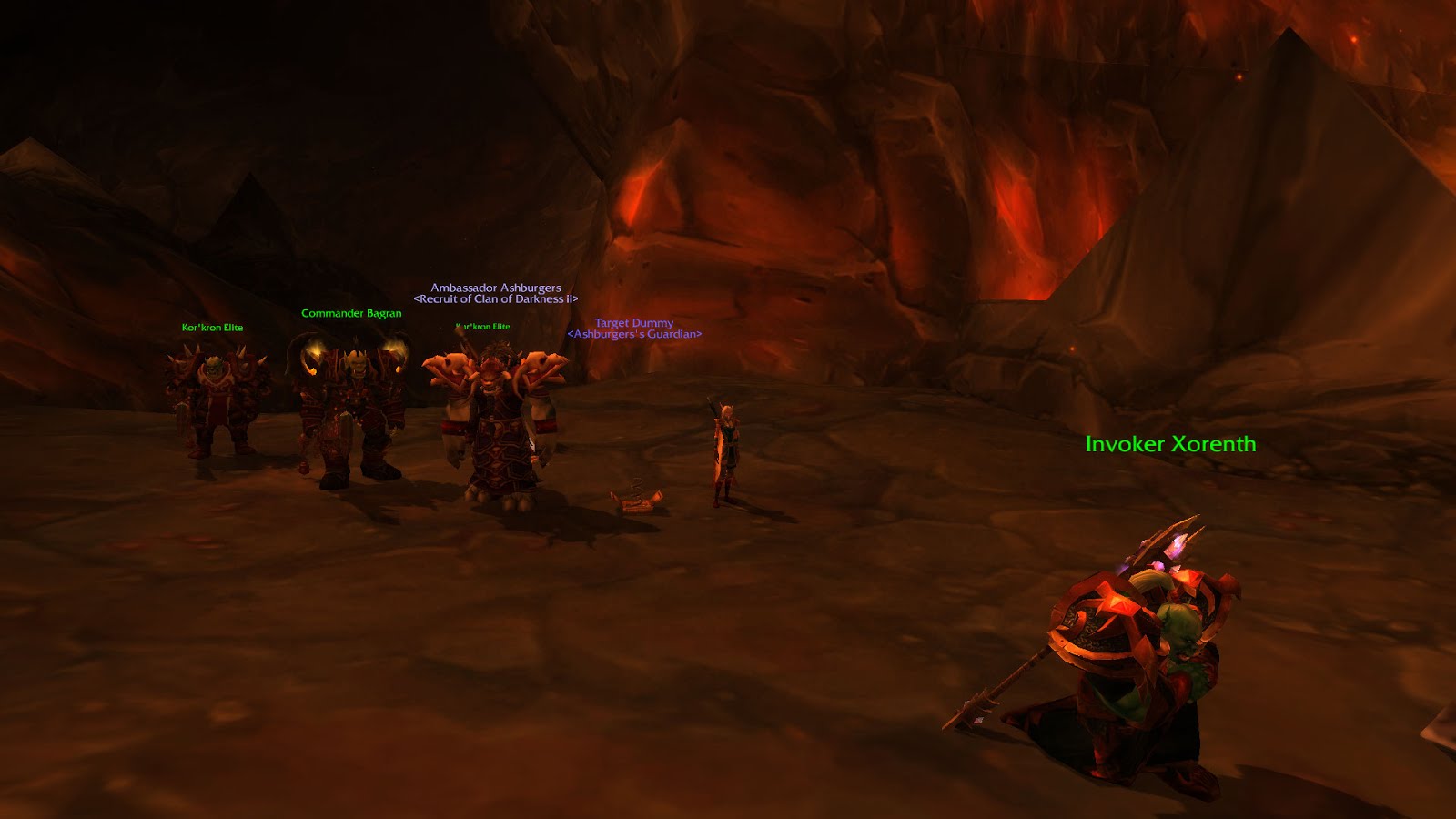 Pally Power!
Then we did Deadmines tonight! Went from Lvl18 to Lvl19! 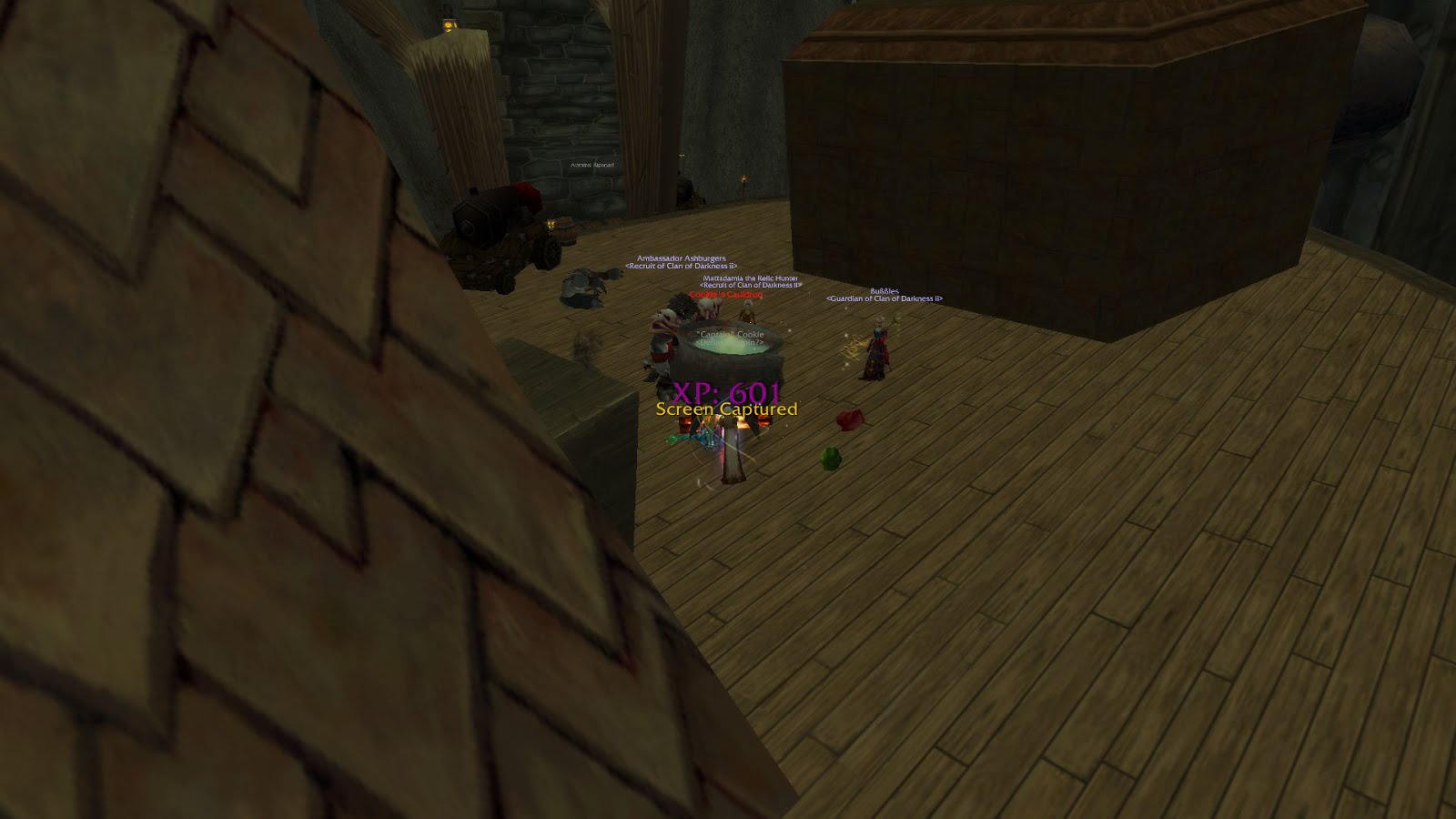 What a motley crew!

Clan of Darkness 2 Guild Dungeon Run Achievements!
Healer mount - Swift Timber Wolf
2/ Midsummer Fires
Took my lil Warlock around to get fires in Azeroth and found a cave around the back of Dun Morogh. Spun around to this sight, which I had to capture in a picture! 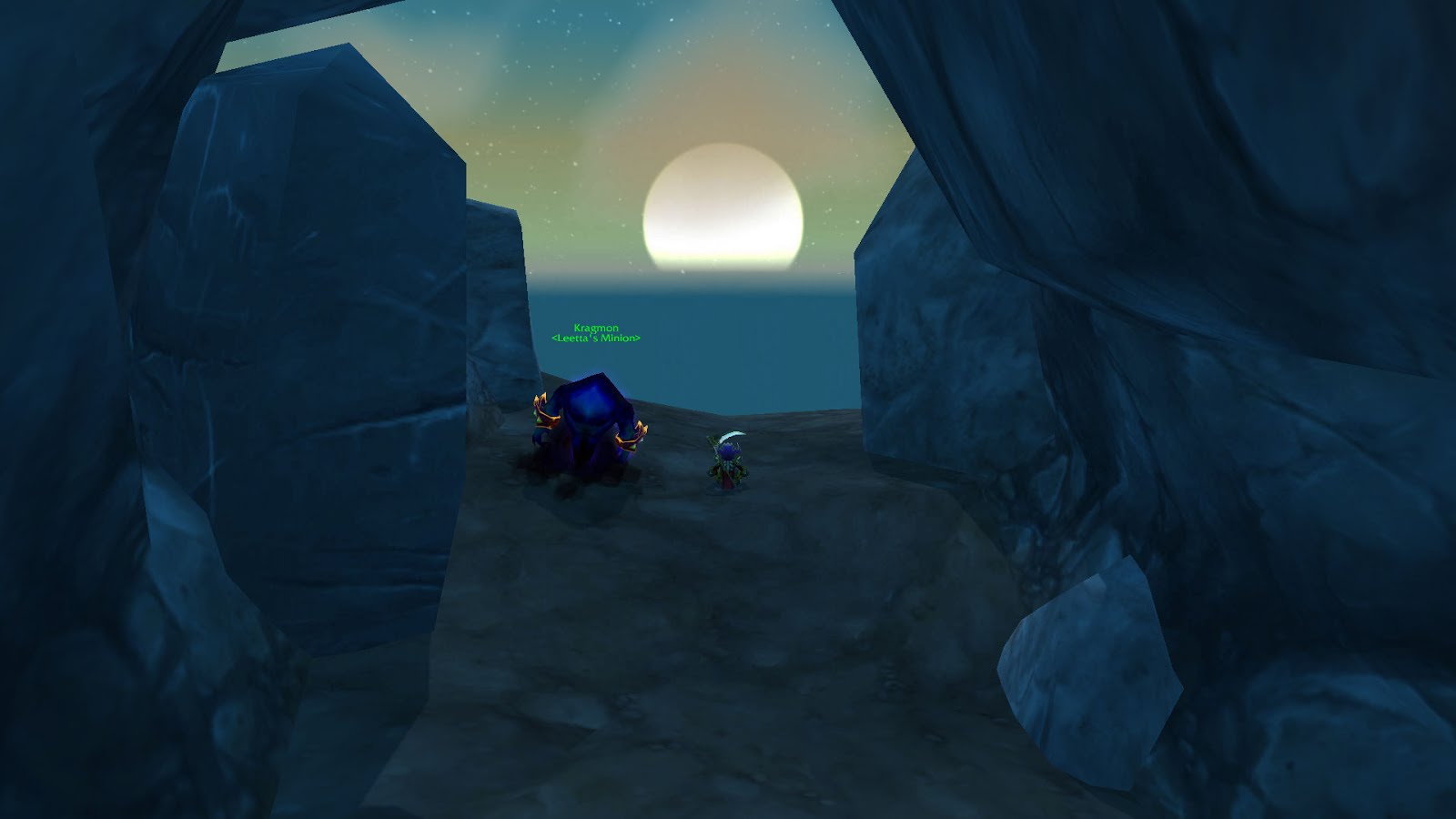 Morning has broken!
And as I was flying over Duskwood took this picture! 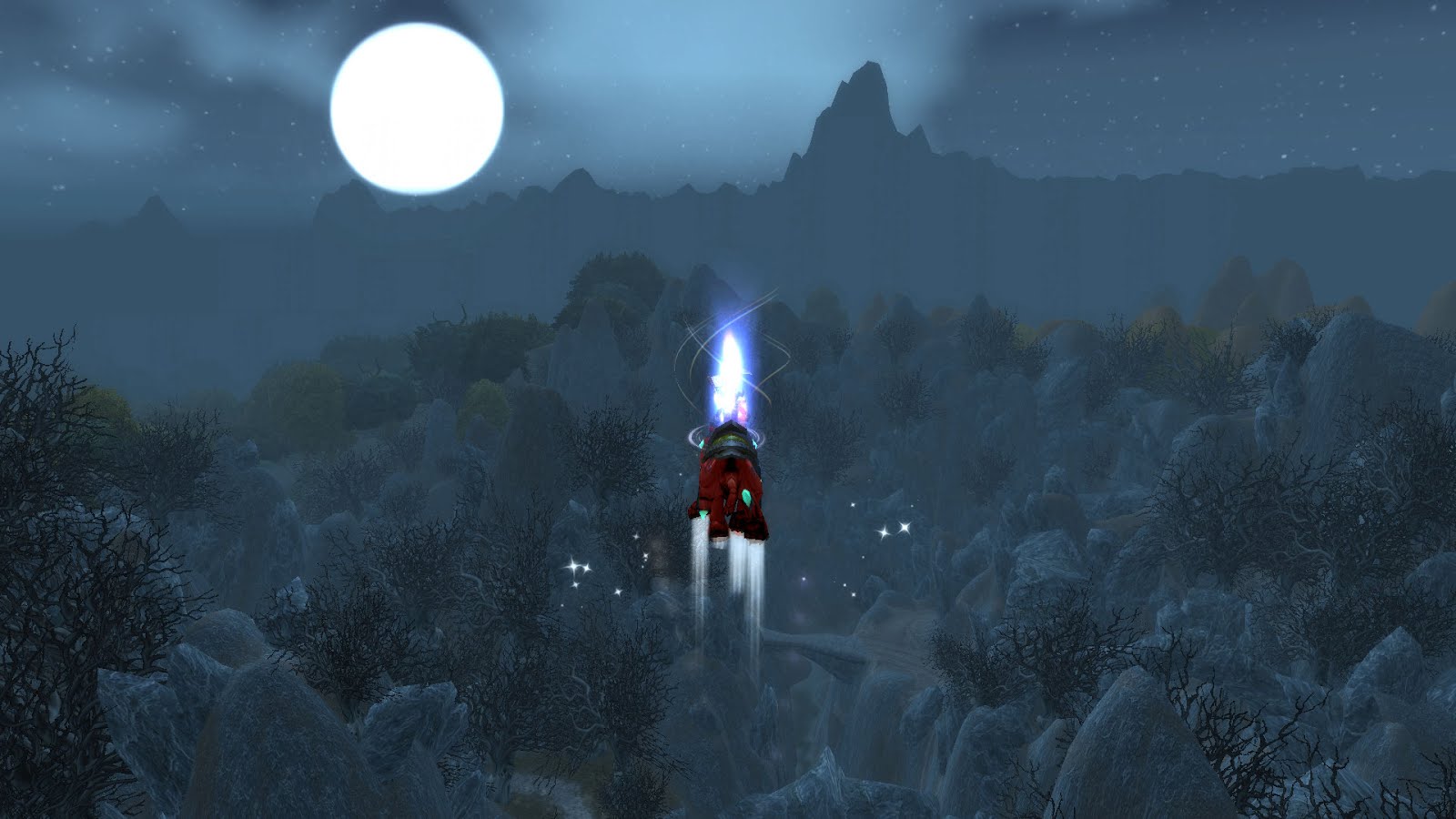 Dusky Moonlight!
The scenery still amazes me how gorgeous this game is!
3/ LFR CoD Style
Friday night fun was about doing LFR of Siege of Orgrimmar
Wingy, Ashayo, Cloggie, Pontis, Grand Nagus, Pixiegirl, Tiber, Winslow, Moonie, Zikar, Danarra and Duvessae all came out to play!
Many of us had not done any of the current raiding content!
Huge thanks to Wingy, Ashayo and Cloggie for explaining the fights in a way that we understood what had to be done :) 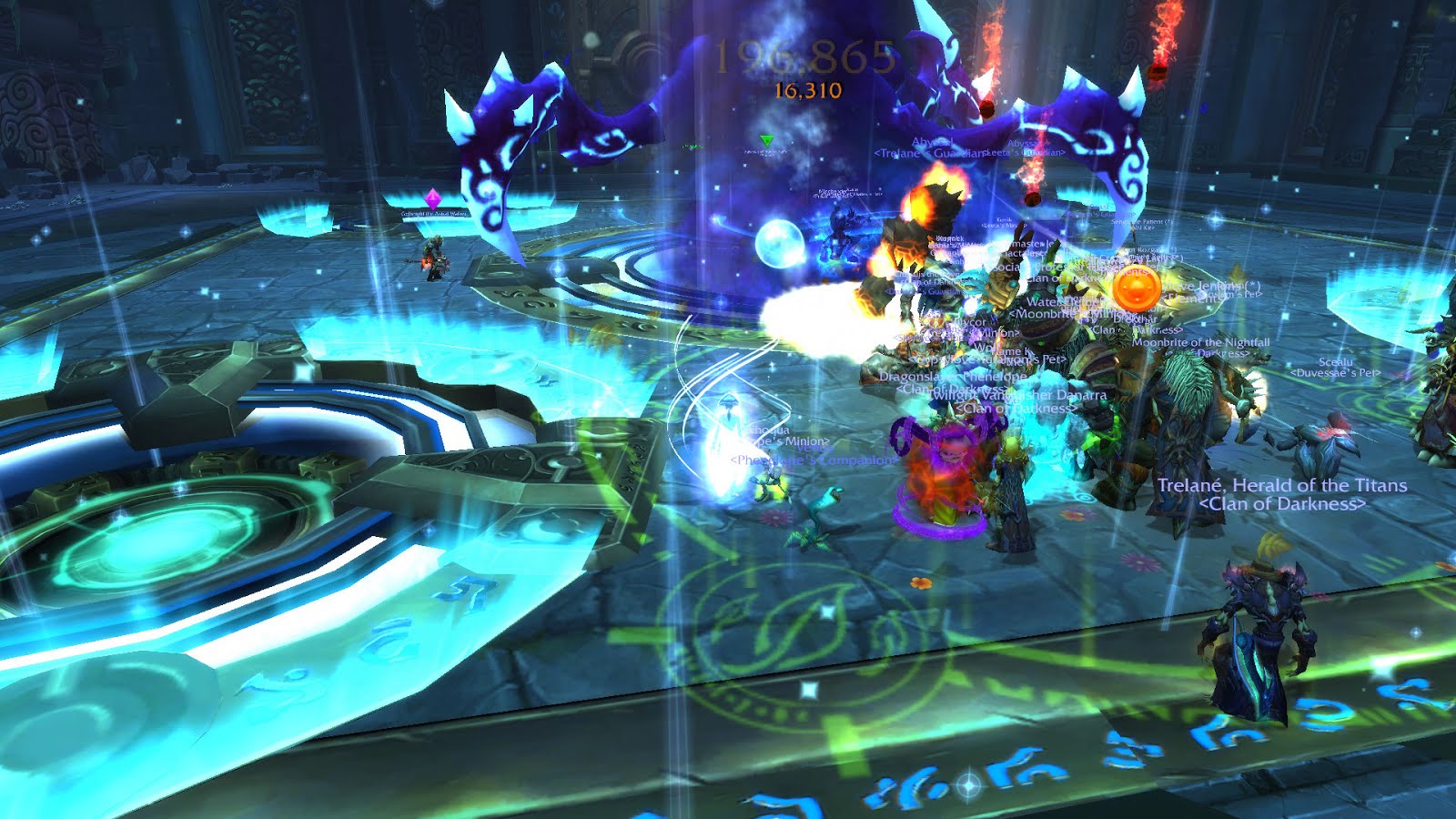 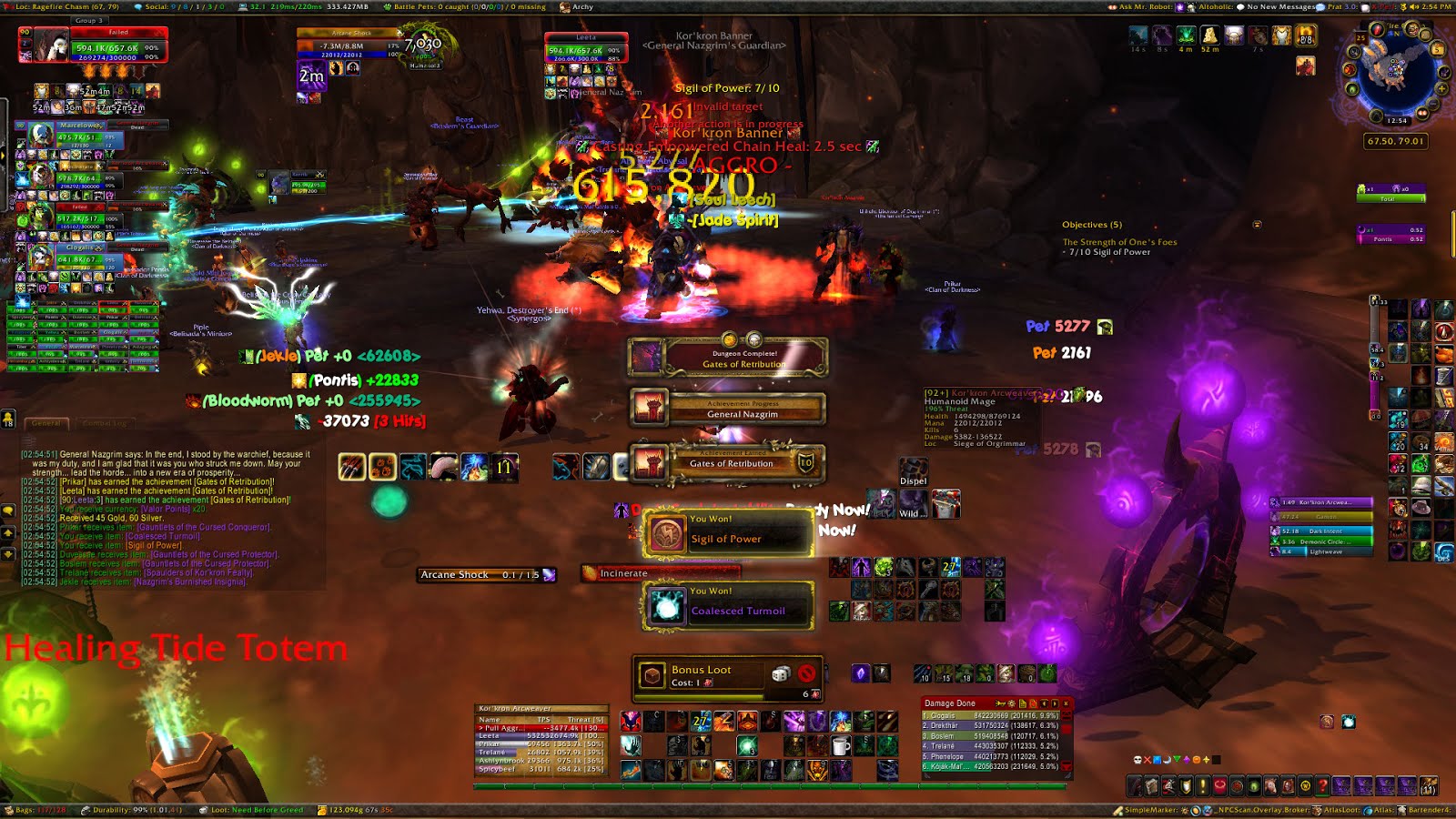 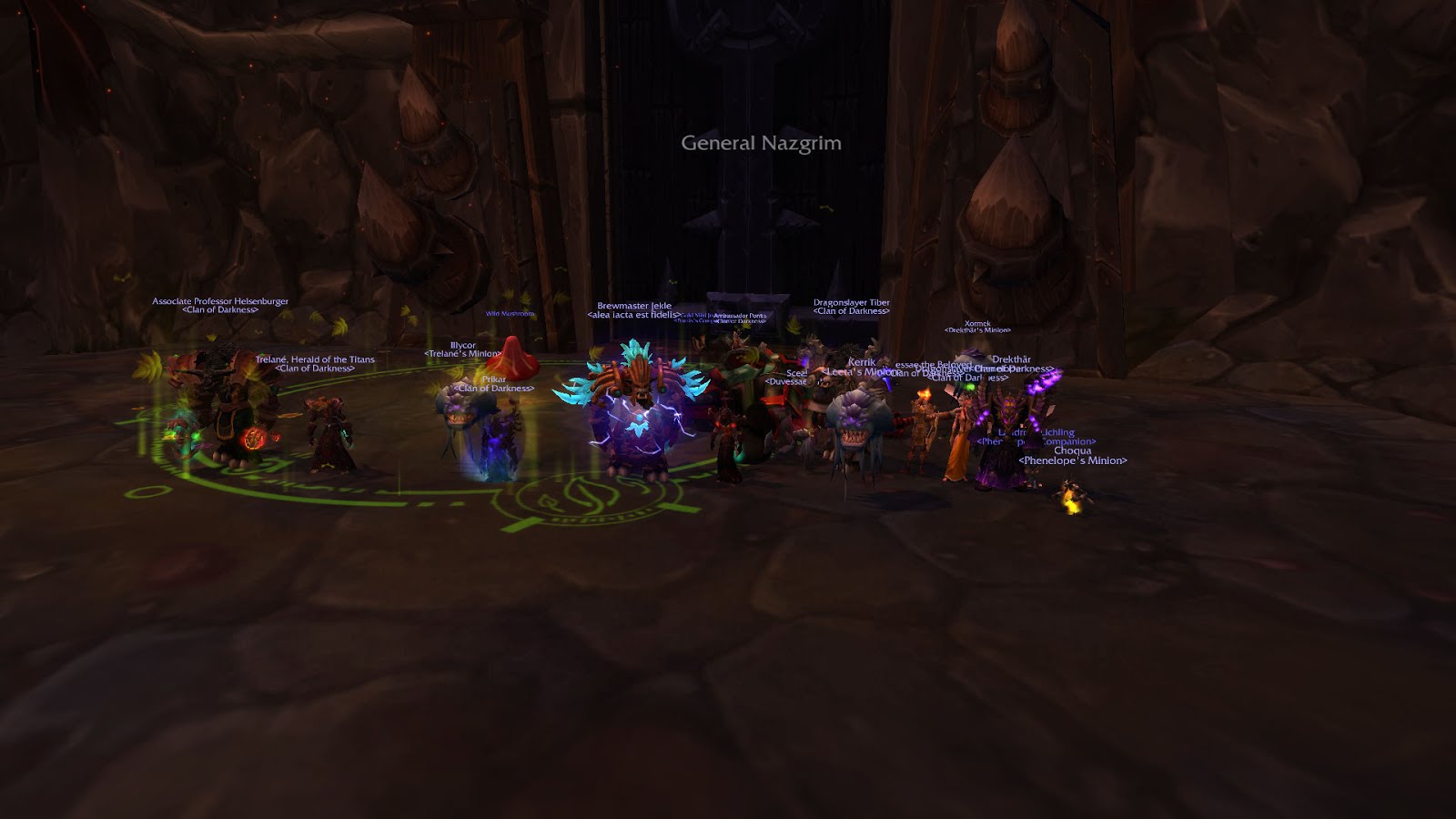 Raiders!
4/ Darkmoon Faire is back!
A reminder to get your flour, dyes, threads etc ready to hand in!
Utilize the fact that by getting the Whee buff it will help with rep grinding as well as grabbing a Darkmoon Hat for the extended grinding times!
http://www.wowhead.com/event=374/darkmoon-faire
5/ Because I Don’t Have Enough To Do
New toon - Orc Shaman hanging out with Vol’Jin and Baine in Razor Hill 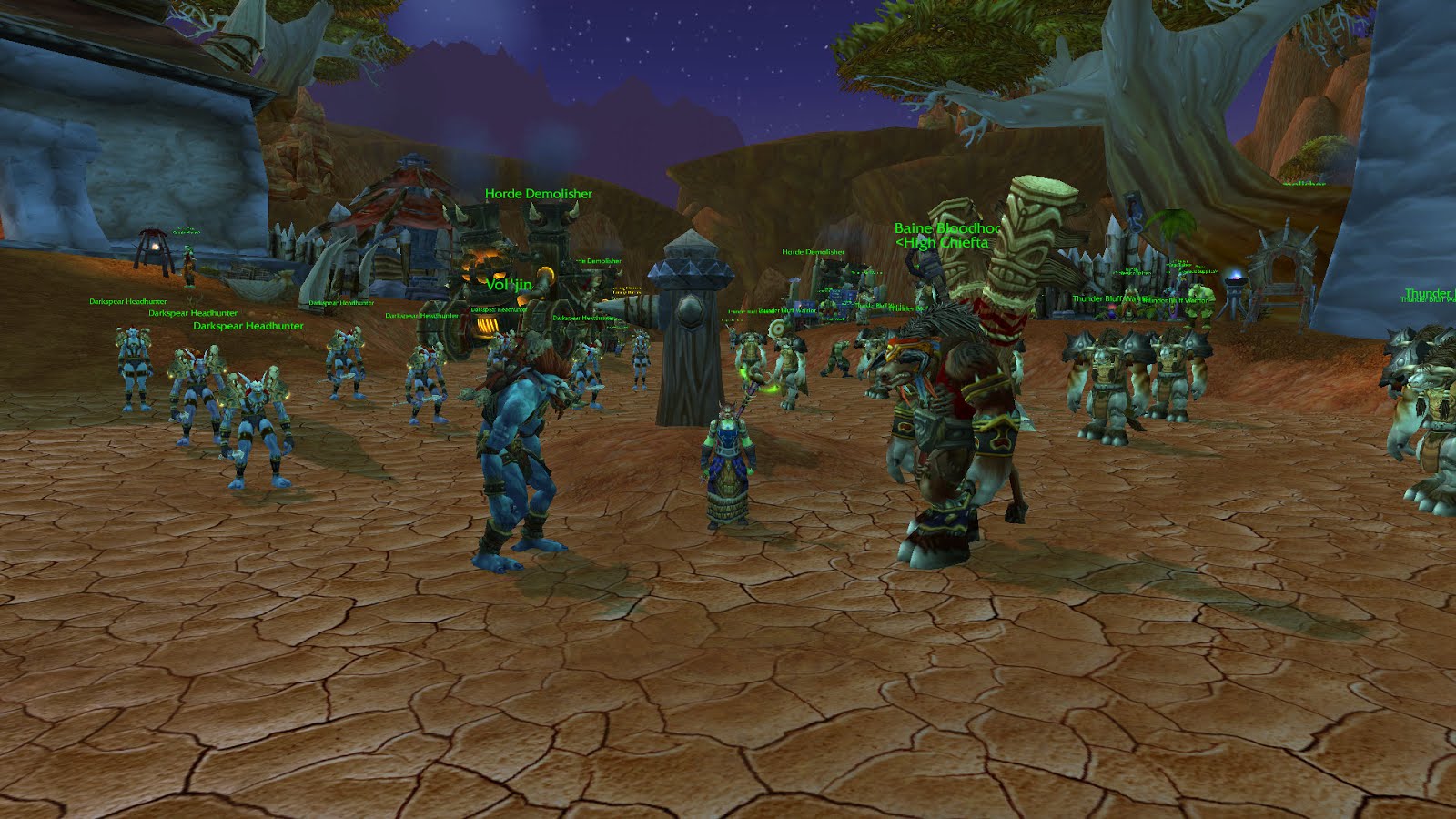 My name in game on Earthen Ring is Belkairne.  "m new to the server coming over from Cairne, I have a few 90s over there and a 90 spriest on Garrosh.  My first toon is a druid named Shadowspite,  that I started playing just before BC came out.   Unfortunately the guild I am in on Cairne has gone dormant and I am looking for a new home.   I heard Grandnagus on Corpse Run Radio and one day on Aeirie Peak I had the chance to talk to him and he recommended I listen to Ctrl Alt WoW.   So now I'm hooked on Ctrl Alt Wow, and Corpse run radio.

For the past few weeks I have been listening to the show during work and I would like to request an invite to Clan of Darkness, I love Leetahs pet guides, Grandnagus' knowledge and would like to contribute somehow to the guild.  I don't want guild repairs, access to the gbank  etc. just a nice community.   In real life I'm a father of 4, married to my lovely lady 24 years this week, and turn 47 next week.  My oldest daughter is 22, my son 13, my daughter 11, and my youngest 6 years old.   I don't like drama and to cause problems but I do love to help.   Belkairne is only lvl 13 but I'm working on him.   If you send a ginivte let me say think you beforehand, and if not that's fine too thank you for your consideration.

So, I'm sitting on the Timeless Isle trying to get that *one last piece* I've spent several days trying to get when Leeta pops online and reminds me that I need to send in a submission for the week.

Not so much to report in-game.  Got Quinnz to level 40-some-odd.  And I raised my hand when Aprillian asked "who doesn't have a level 90 hunter?" during the last podcast.  Now?  I have a level 40-some-odd hunter.  :D
I tried to gear up my mage enough to join in on the LFR that Pixie was putting together for Friday, but...well...I managed to dump half a bottle of acetone on my computer desk...and then proceeded to *wipe.  it.  off.*  The bottom of my mouse.  Which resulted in a non-functioning mouse.  This happened early Thursday evening, and I got home with a replacement late Friday night (yay for double-time-and-a-half work!) so needless to say the gearing did not occur.
I've spent the day today packing and cleaning house because I leave earlyearly Monday morning to go on vacation: DidneyLan! It seems like everyone I know and then some were there last week, so hopefully it won't be quite as packed as it can be.  :D
However, visiting rodents will mean I am several hundred miles away from my computer, so I will be unable to join in on the completion of SoO...sorry Pixie!  But if I can get a dang drop of gloves from Timeless then at least I'll be ready when next I'm able!

And that's my email for the week!
For the Horde, for the CoD, and for finding Stitch in the park!!!


Hello Aprillian, Leeta, Rogueslayer and Tedrah,
I hope this email finds  you all in good health and spirits. I haven’t been up to a lot over the past week as some real life issues have been at the forefront.
What I have done in game though, has been achieved surrounded by friends. We completed the first two wings of LFR Siege of Orgrimmar which was a lot of fun. I helped Wingy, Ashayo and Leeta to complete part of the noodle cart quest so I brought along Clogalis and met them at the Storm Stout Brewery. I thought it would be funny if I shadow stepped behind one of the little mobs that can be found floating high up in the first area of the dungeon, but soon fell through the world and found myself in another dimension somewhere underneath the brewery and had to be summoned back (Screenshot attached).
I ran around on the Timeless Isle with some of my alts and acquired the assistance of Leeta when I could because unlike my rogue, my alts seem to be very very squishy and some of them (looks to see if they’re in ear shot) couldn’t fight their way out of a paper bag.
As far as the Legendary Cloak quest line goes, I won’t bore you with the status of each toon as some of them haven’t progressed since my last update. Ochay and Ragulfa are both on the A Test of Valor quest with 1238 and 1000 respectively of 3000. Ragulfa has also earned exalted reputation with The Black Prince. Tennish is now 63% of the way through the quest chain after completing The Crown of Heaven quest. It’s really been an eye opener for me as I usually play melee, but after playing my holy priest Tennish quite a bit lately in raids, I have a lot more appreciation for healers. My favorite pmsl moment was when a tank pulled one group of trash but then ran kicking and screaming to a second group of trash and promptly died due to running out of range of all the healers.
Clogalis has been running SoO on normal with the help of the oQueue addon and was lucky enough to win a new pair of boots using the bonus roll which means this item is classed as Warforged and has an item level of 559 rather than the 553 which usually drops in normal. Kil’jaeden is still, as Leeta would say, a weasel. I have the full Sunwell Plateau set except for the helm which drops from him. Patience is a virtue.
As far as real life goes, I’m simply waiting for the all the stars to line up. That being, my weekend with no rain and no wind. Then, you’ll find me in the kayak. Unfortunately being winter time here at the moment that might take a while.
I’d like to finish off with a quote; “Sometimes you find yourself in the middle of nowhere, and sometimes, in the middle of nowhere you find yourself.”
See you all in game,
Cloggie \o/ 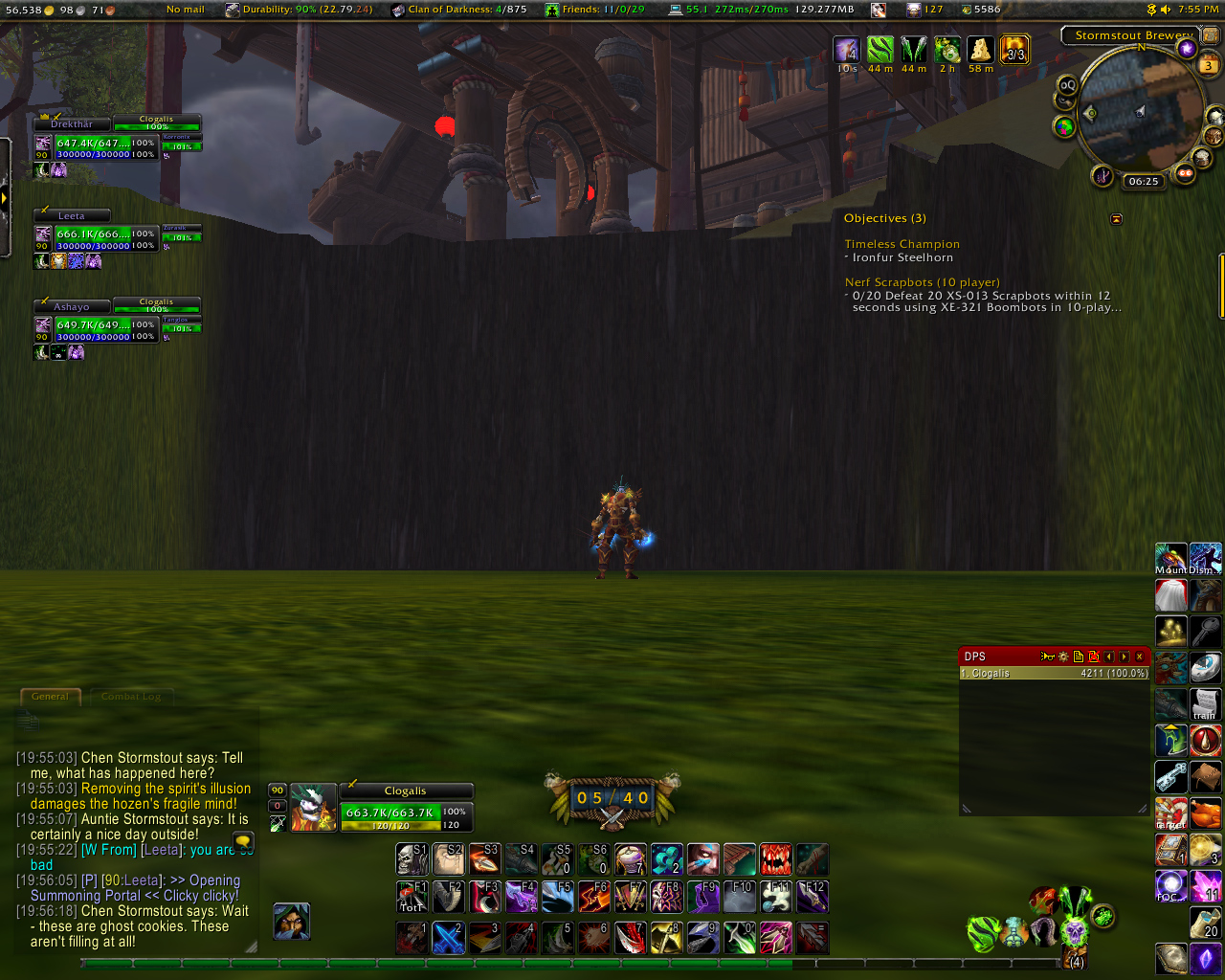 Addon Spotlight with Grand Nagus:
This list of Addons covered on CAW including the shows number it was covered on and the link to the download page on http://www.curse.com/addons/wow and http://www.wowinterface.com/addons.php
If you want to make it easy to install addons and keeping them up to date you might want to use the Curse Client v5: http://clientupdate-v5.curse.com/setup.exe
BE AWARE MAC-USERS: IT HASN’T GOT THE FULL FUNCTIONALITY THAT THE WINDOWS VERSION HAS!! It is usable but to a lesser extend.
Here is the list of Addons with the respective links: 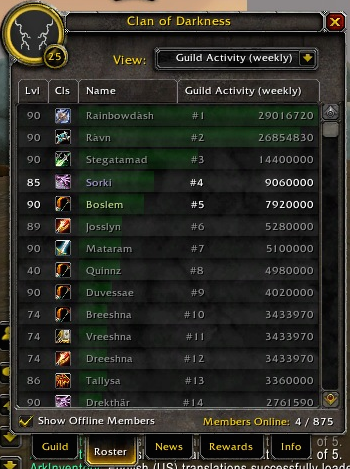 Posted by Aprillian at 7:47 PM