No Juuno and Pixie Girl. It's summer time!


Farming in Halfhill
Did some time on the Timeless Isle.

Not alot done in WoW this week as I spent most of the week curled up in bed recovering from nasty muscular flu!
However did get a few things done :)
1/ Healers - Pally Lvl29 - 30
Did Scarlet Monastery with Ashayo and Wingy!
We managed to get the CoD2 guild Achievement :) 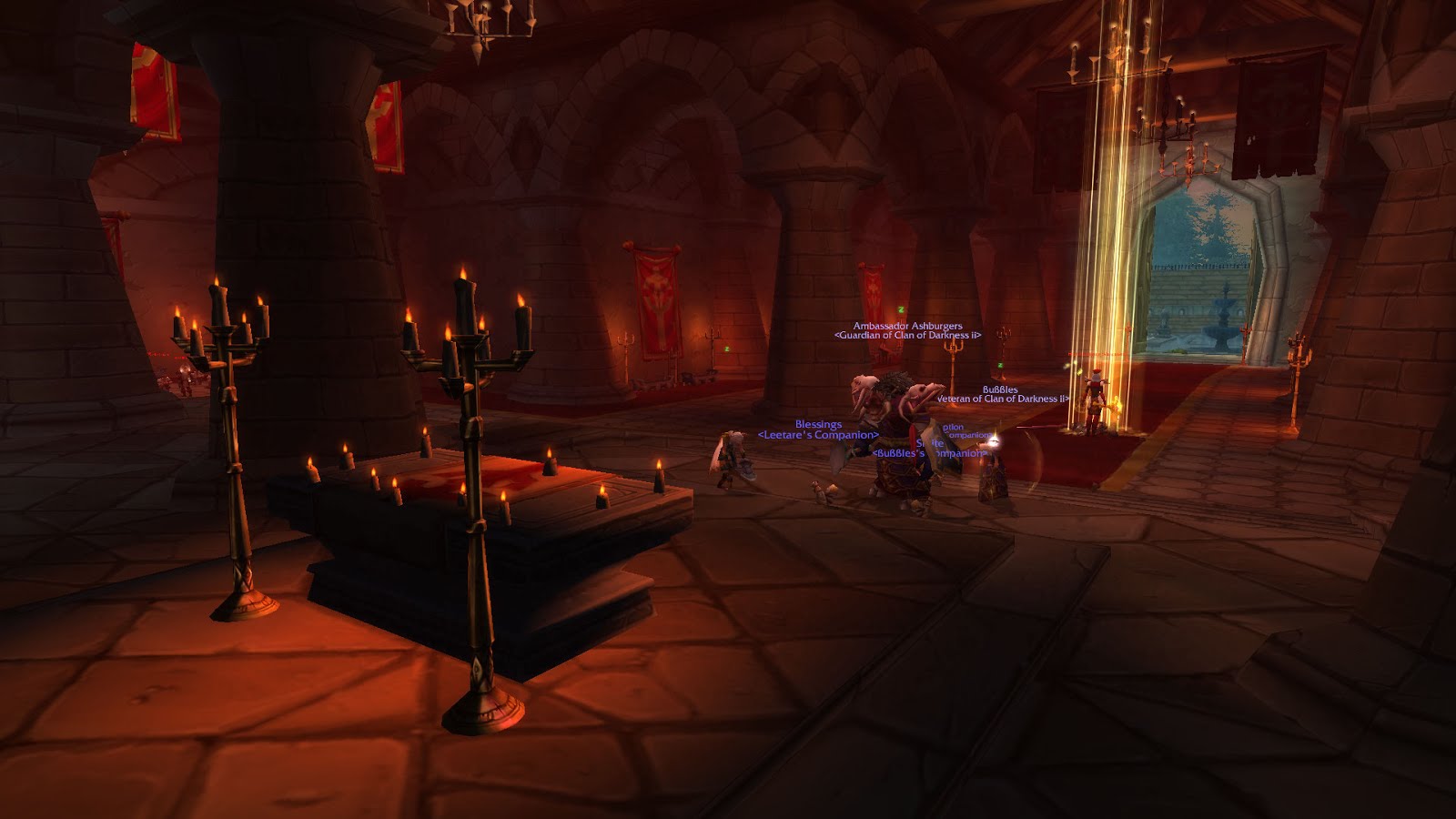 The ‘NOT’ Drain Life Screenshot! 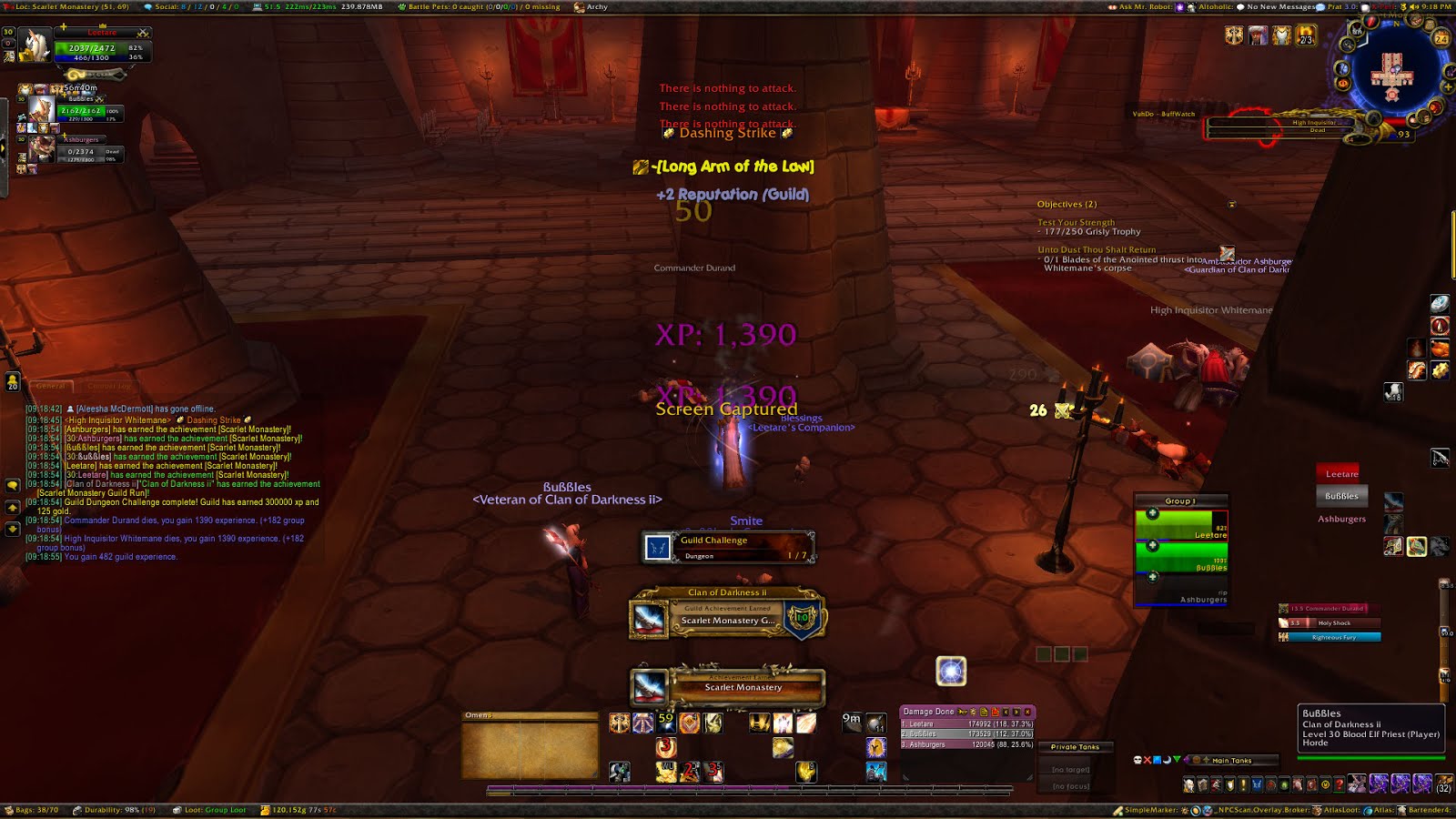 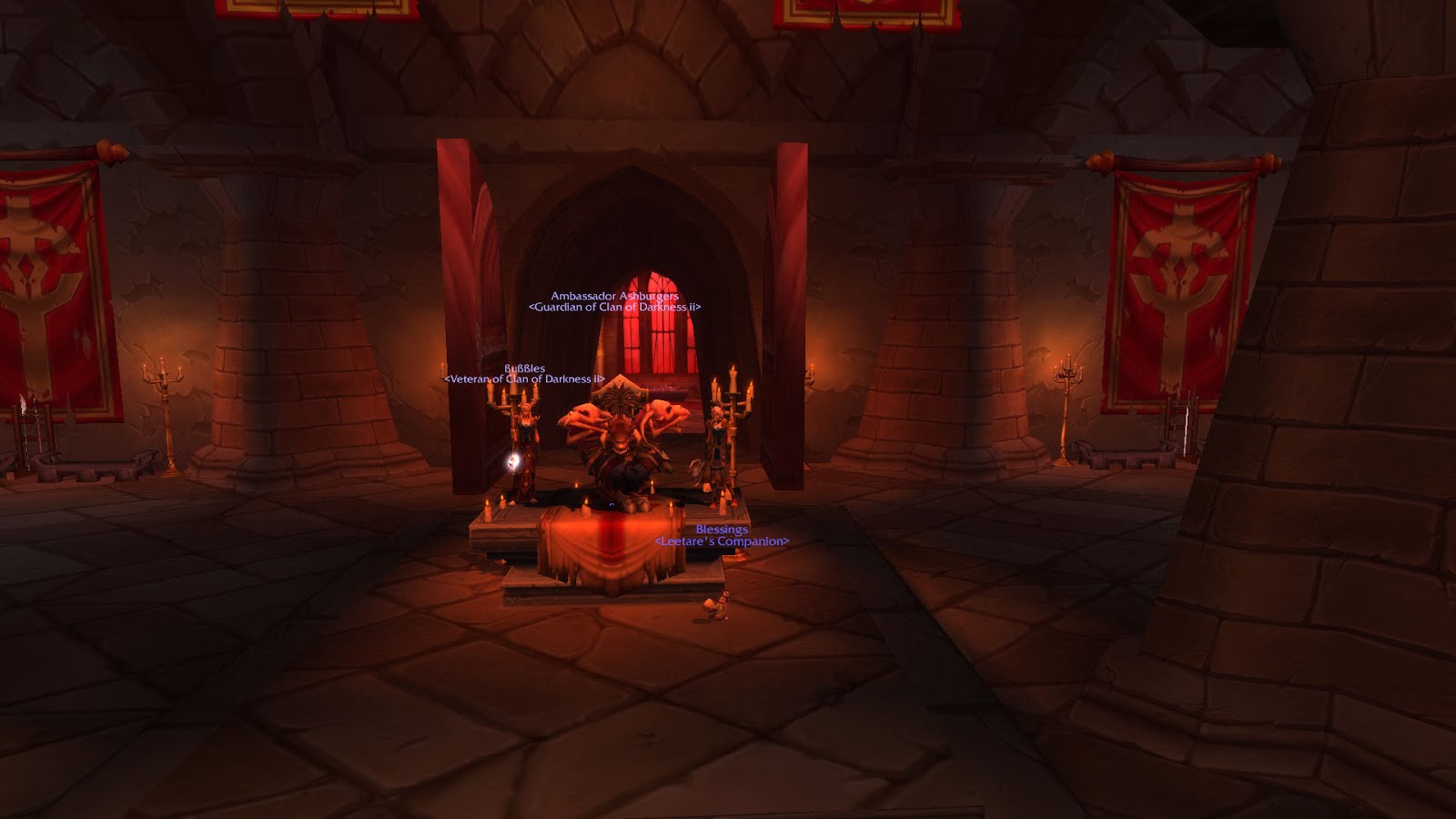 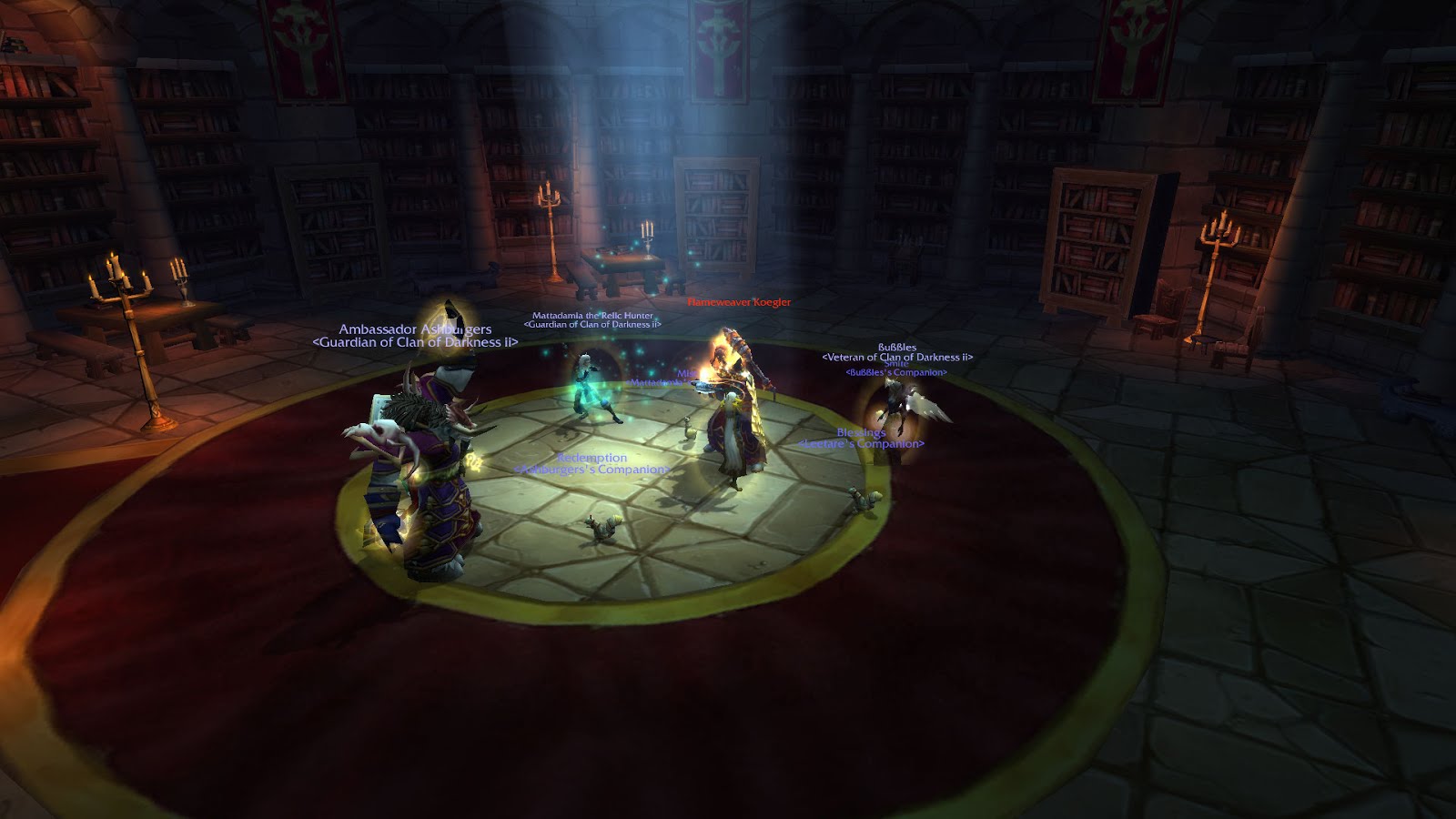 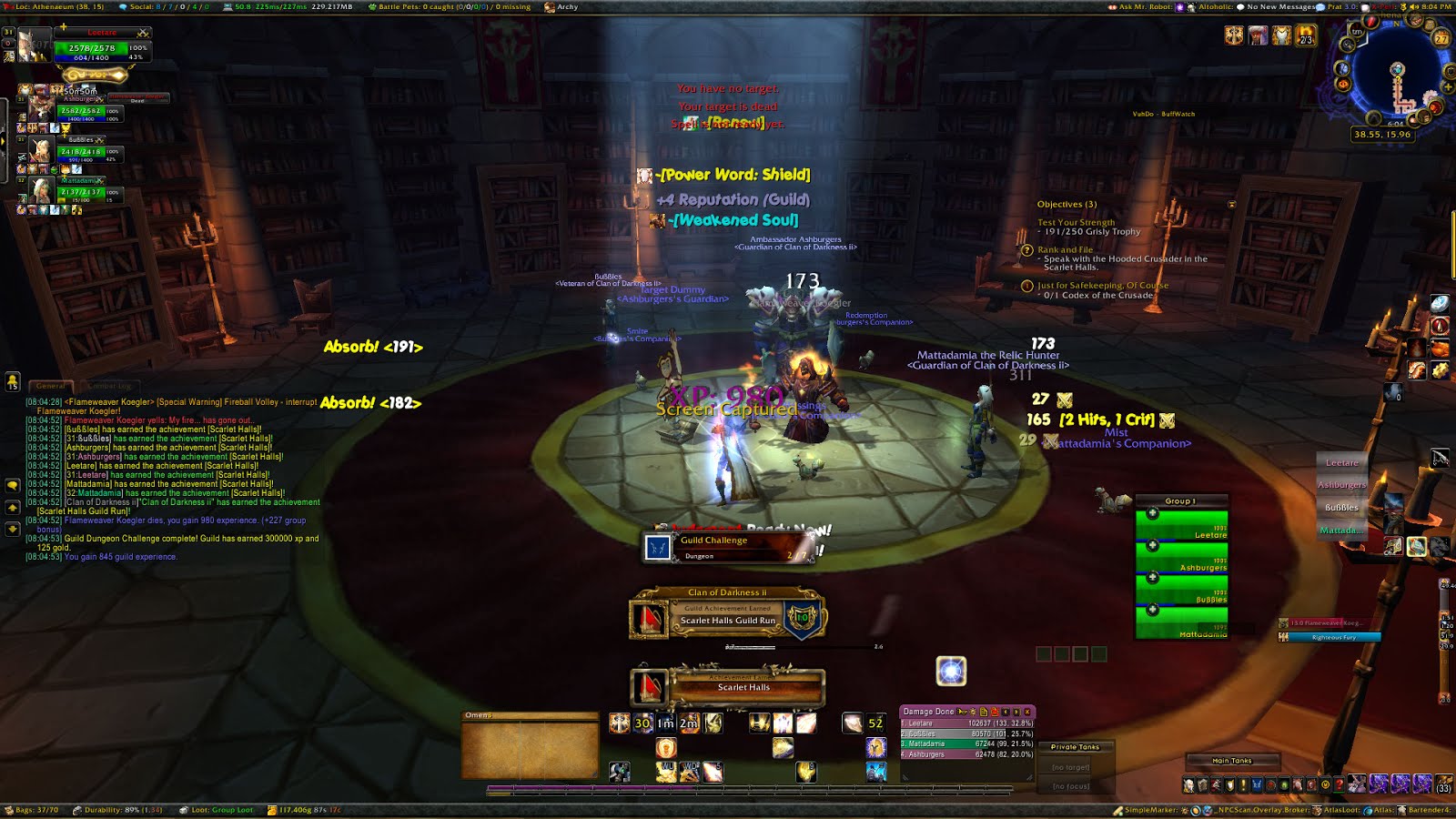 CoD2 Guild Achievement!!
And then we decided we’d do Maraudon - The Wicked Grotto
Lvl31 - 32
Huge thanks to Hefflock for helping us get into the dungeon ;) 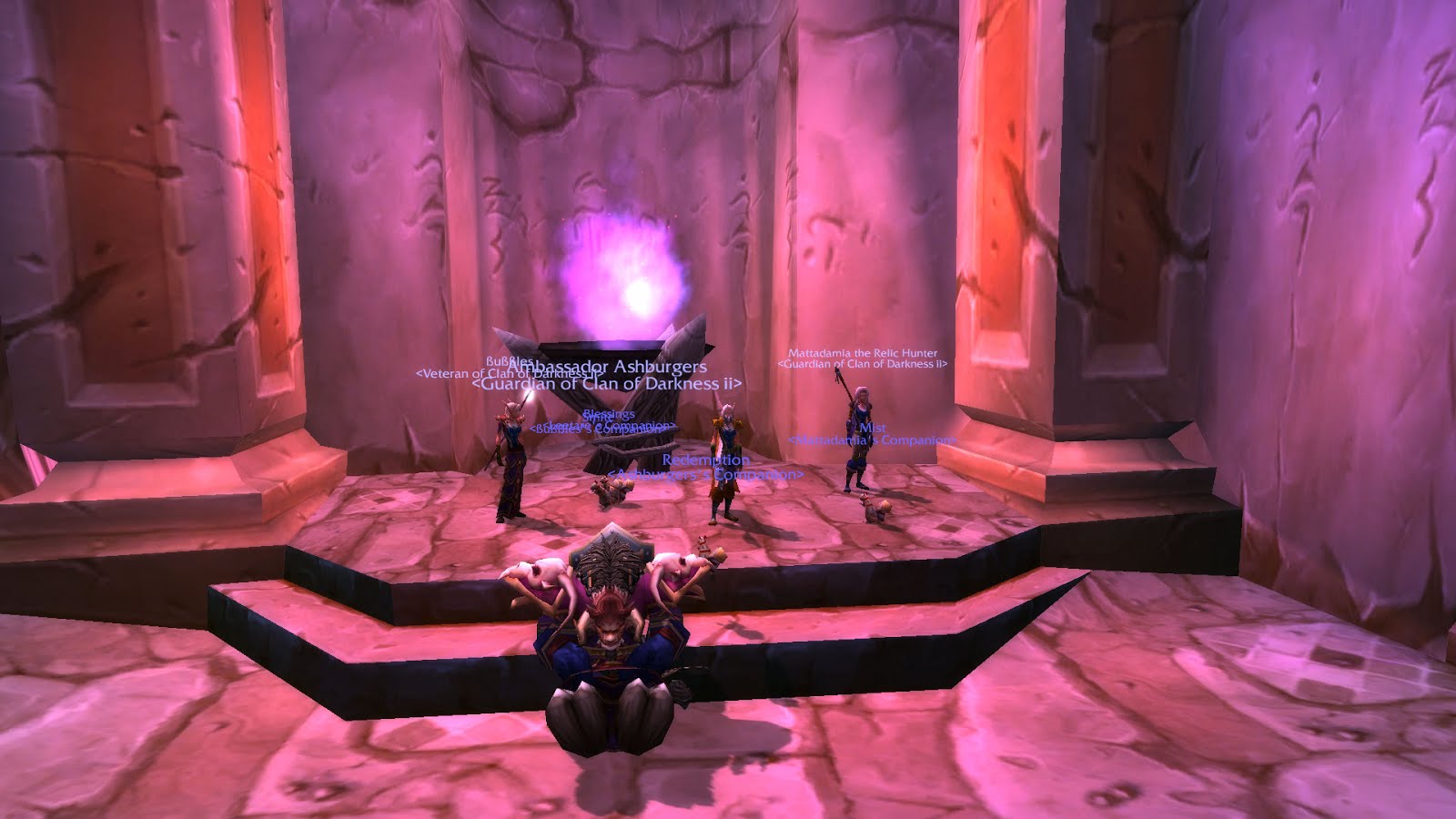 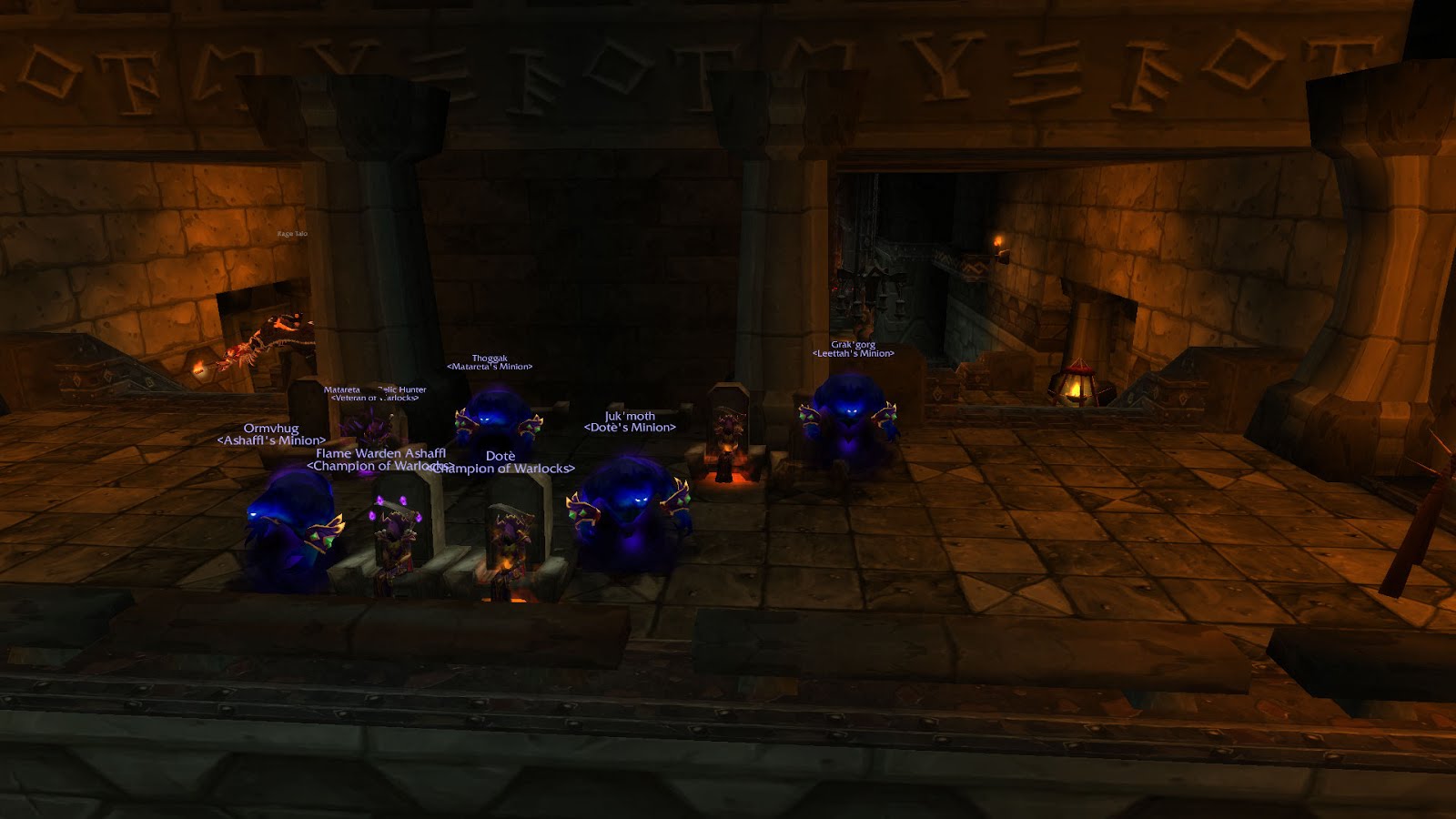 'Welcome, ladies and gentlemen, to this evening's presentation!' 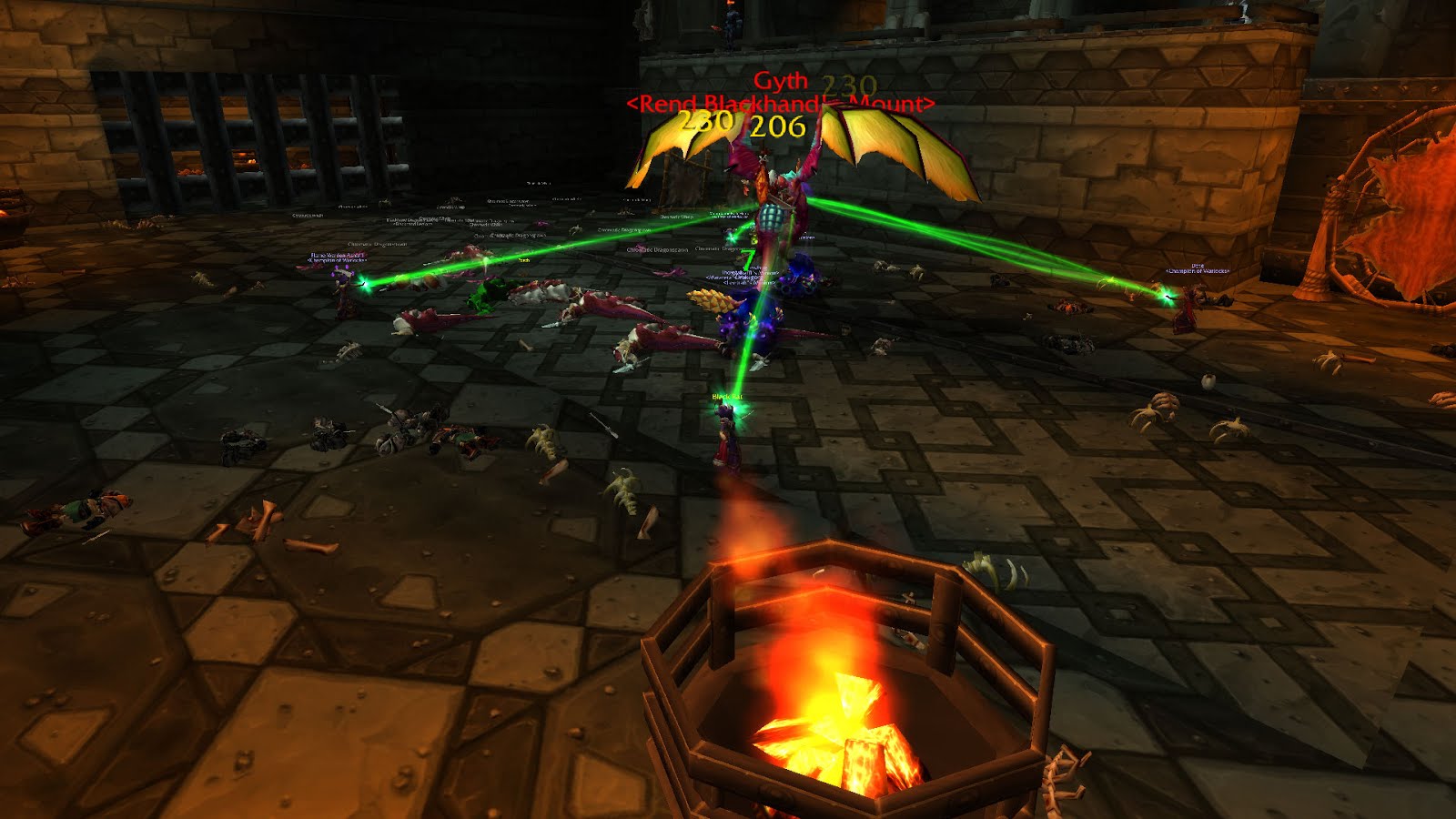 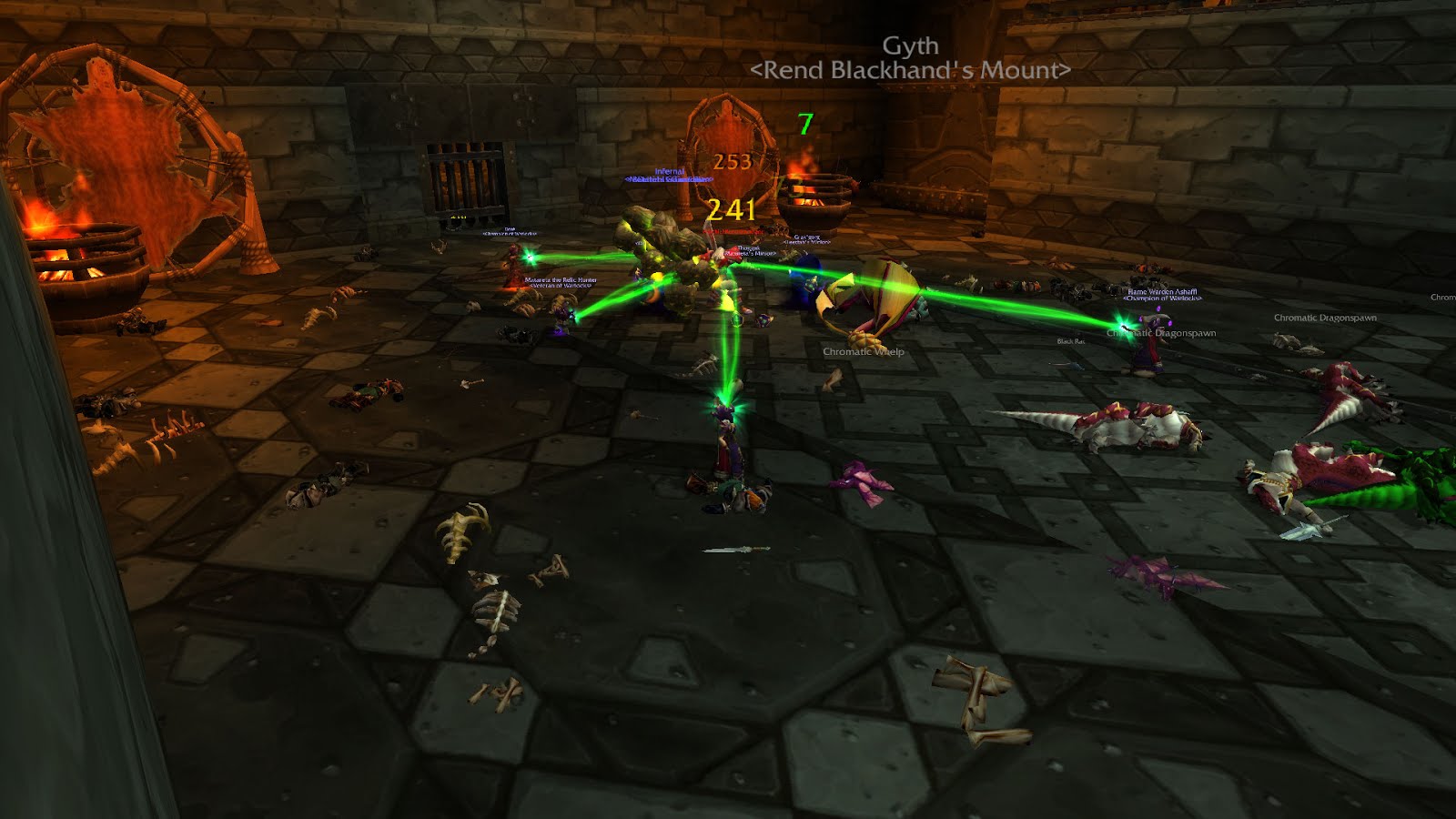 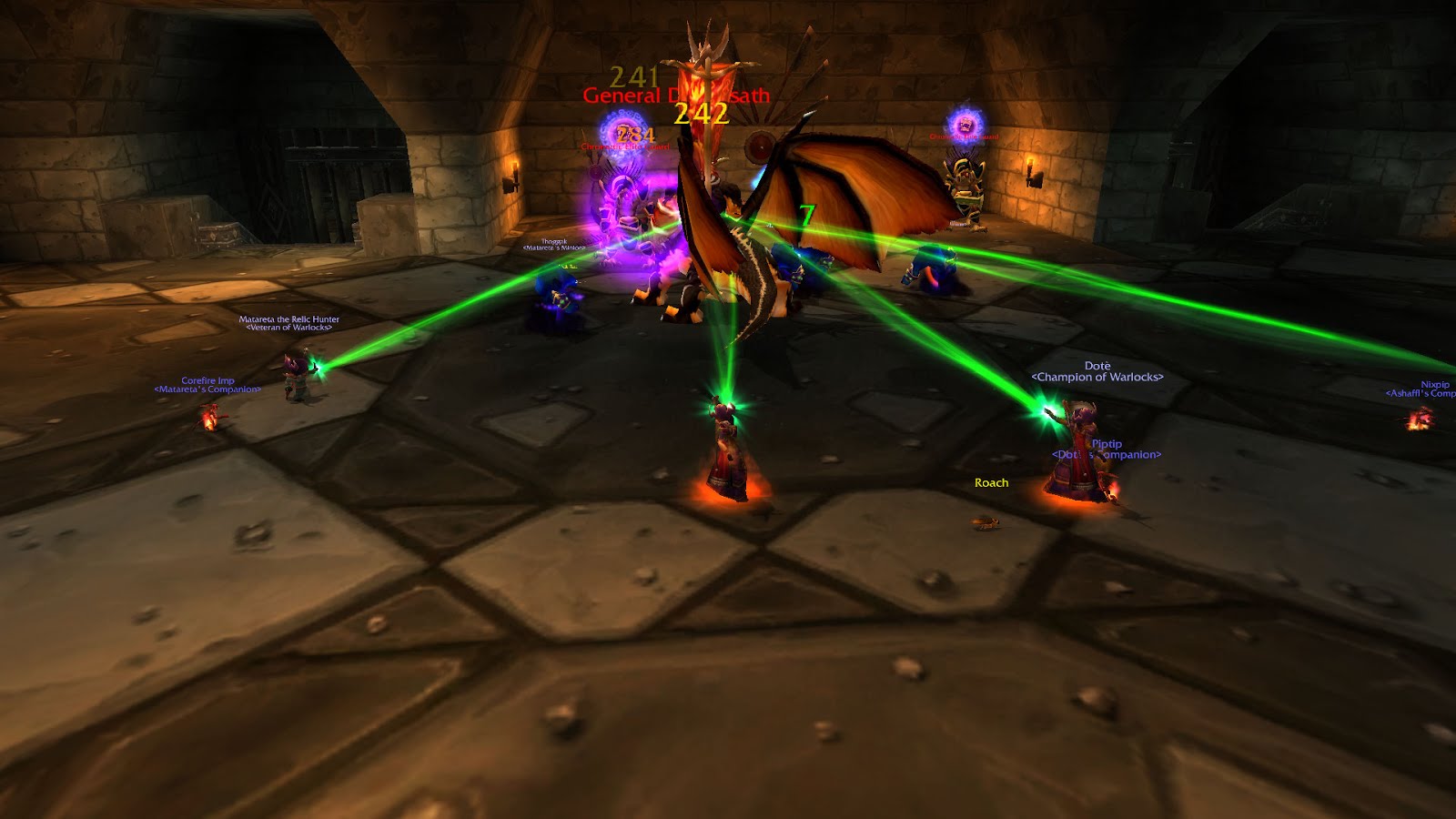 4 Warlocks walked into Upper Blackrock…
3/ Timeless Isle - Leeta
Well my luck for another week has not been great! Nothing added to the ‘Need A Bigger Bag’ Achievement!
I am becoming more obsessed with killing and looting… now whether this is a good thing I’m not sure lol
Some Timeless Isle Kill Stats - Leeta Style
Huolon Feasel - 136 kills
Death Adders - 1859 kills
Imperial Python - 58 kills

Hi all,
I just started listening to the podcast a few weeks ago. I usually listen while I'm at work. I really like listening to you all discuss your weeks in wow.  I listen to a few other podcast throughout the week, but I enjoy yours the most.  What I like most is the excitement and joy you all have with the game.  You play the game for the reason it was made, to have fun.  While others are out their stressing out over the game, min/maxing their character and raging at people in battlegrounds or LFR, you all just play the game your way and have fun with it.

Anyway, since you all have plenty of alts and have probably played through most of the starting zones, what one is your favorite? Mine has to be Mulgore.  My first character was Tauren and I just love the open space to roam in that area.  It's too bad people level from 1-10 in 30 min now and don't really get to enjoy those zones the way we did many years ago.

Thanks, and keep up the great work!


First hearthstone segment
Grand Nagus makes this seem so easy but it's not this is hard bigherth@gmail.com


They freaking love me in that tunnel
Well my rouge crept ever closer to 90 this week and I managed to knock off the normal raid bosses of nax in hearthstone but the heroic is still melting my face.
From Big G


Just stopping by.
Hello CAW Ladies,
I thought I would just send a quick email to tell you what I have been doing in game lately. Well I haven't been on too much lately with work getting in the way but I did finally get my 20th Level 90 this afternoon. It has been a long road but I have enjoyed all of them. I really wish they would join Earthen Ring to another server. I need another 22 character slots. I have played the new Warlords Beta but I have tried to stay out of it too much. I would hate for it to get boring making my level 90's into level 100s.
Anyway I better move along. I feel an itch to create a new toon. You ladies Take Care.
Matahorn
P.s I would like to Thank Aprillian for making me an Officer of Clan of Darkness. I am Deeply Honoured. I hope I can live up to it.


One, two, Wrathion's coming for you ..
Hello Aprillian, Rogueslayer, Leeta and Tedrah,
I hope this email reaches you in time, I believe the show has just started, so I’ll type as fast as humanly possible.
My second Legendary cloak goes too … my holy priest Tennish!
He has completed the quest chain. I had a lot of trouble on the Celestial Blessing quest. This was the part where you are required to either keep Wrathion alive or defeat him, depending on your spec.
Although I do have a shadow spec, all my gear is for healing so I chose to do the healing challenge. It was very difficult. I was healing my heart out but the mob that was attacking Wrathion still had around 80% when I either I died or Wrathion would die. A visit to google saw me watching many videos and reading some guides. But they all suggested using the discipline spec. I have never played disc before and I felt I didn’t have time to learn a whole new spec so I persisted as holy. After doing some more reading I discovered that my stat preferences which favored mastery, was more suited for aoe healing. So, I chose a crit build and let ask mr robot do the rest. After reforging, re-gemming, re-enchanting and a few thousand gold later, I gave it another shot. This time, I kept us alive long enough to get the mob down to 25%. I tried a few more times and eventually I succeeded. I must admit I was very frustrated with this challenge. If I choose a healing challenge, I should be healing not dpsing all the adds and trying to keep myself alive. Regardless, it did teach me to be a better healer and I’ve learnt a few things too.
Ochay is my next guinea pig on the list. He’s completed his 3000 valor quest and is on to collecting secrets.
I’ll leave it here for now in hope that it reaches you in time.
Take care,
Cloggie

Imperial Plate is an item set that contains 7 pieces. 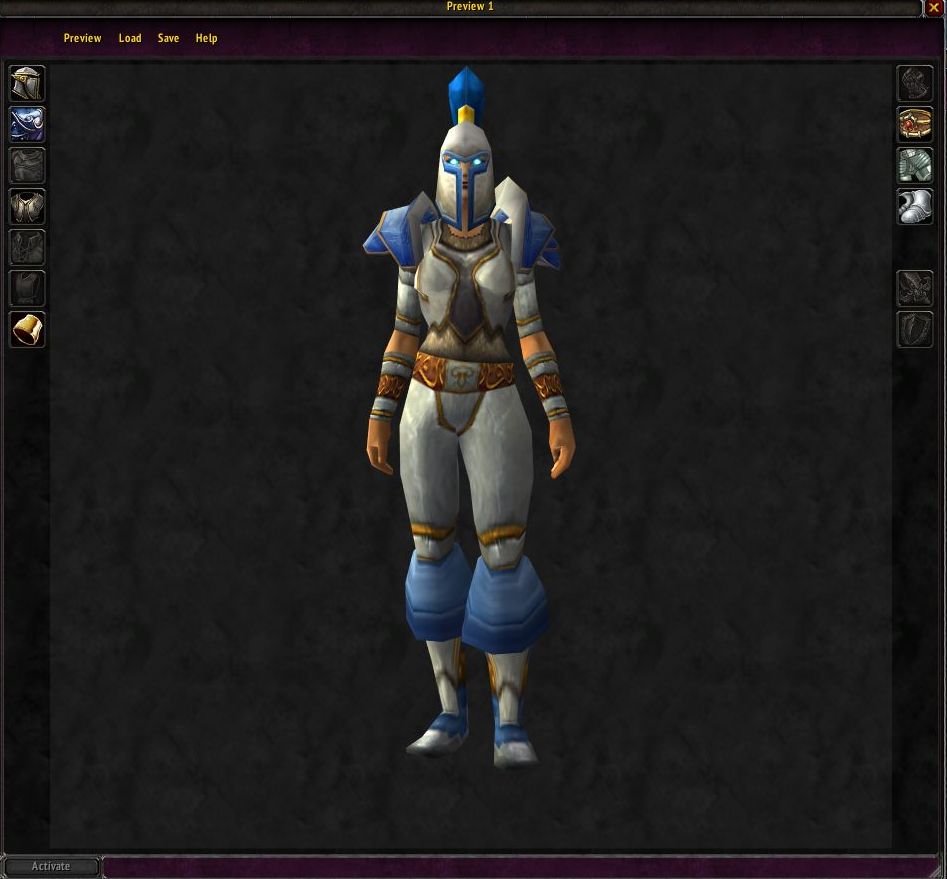 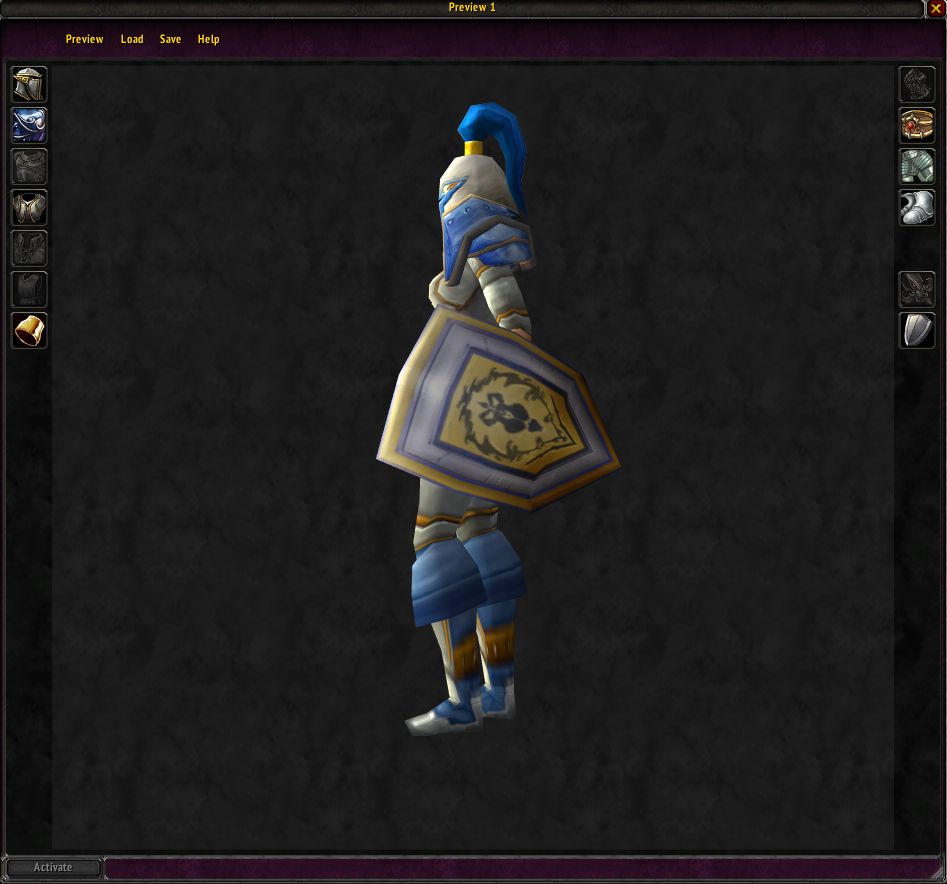 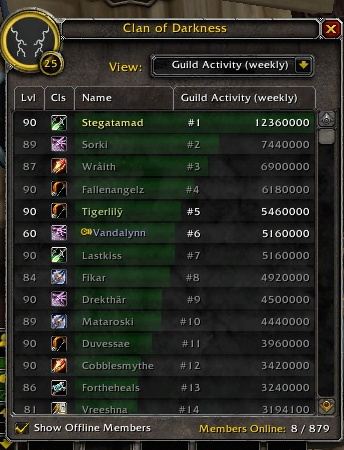 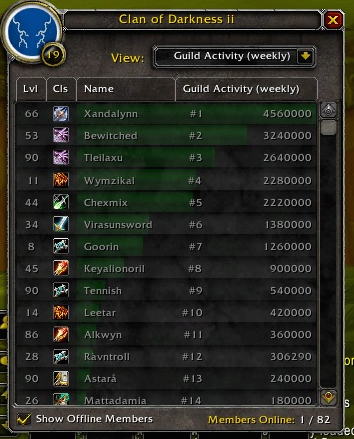 Hello Ctrlaltwow Crew
It has never happened that I write to you 2 weeks in a row but I come bearing a gift.
I won the top 25 in Guild activity competition we had last week in the game. I won an Armored Bloodwing and I thank Donnie for the gift. I already have this mount so I thought I would give it to you Ladies to give away.
You might be able to have a competition of your own and get somebody to make you a new Email bumper.
Anyway I love the new line up. You Ladies are awesome. Have a great week.
Sincerely Matahorn
Ps I must thank Donnie for letting me give away my prize.
Posted by Aprillian at 2:37 PM