Ctrl Alt WoW Episode 420 - What About the Children

Aprillian, Leeta and Rogueslayer discuss another week of playing World of Warcraft, Blizzard's great MMORPG. With segments by Grand Nagus and Rogueslayer of Clan of Darkness. Contest Ongoing send an email to ctrlaltwow@gmail.com telling us how you play WoW, either as an altaholic or dealing with it in your family life to being placed in a drawing for a WoW Pet or an Authenticator.


I hope everyone is doing GREAT today!  Have a great show!


p.s. Music this week is from Auchindoun!
https://www.youtube.com/watch?v=ds0N4TZRSNE 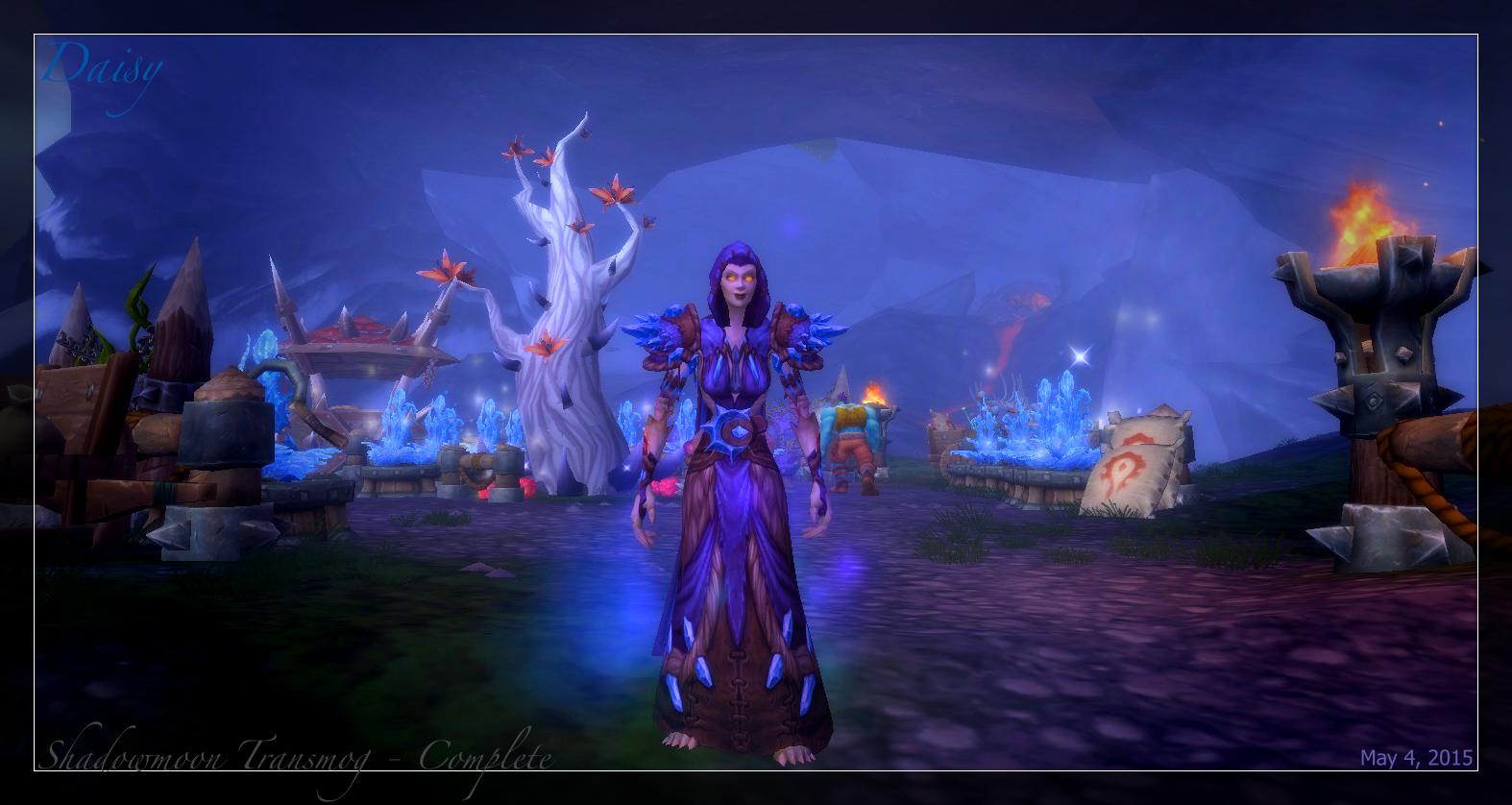 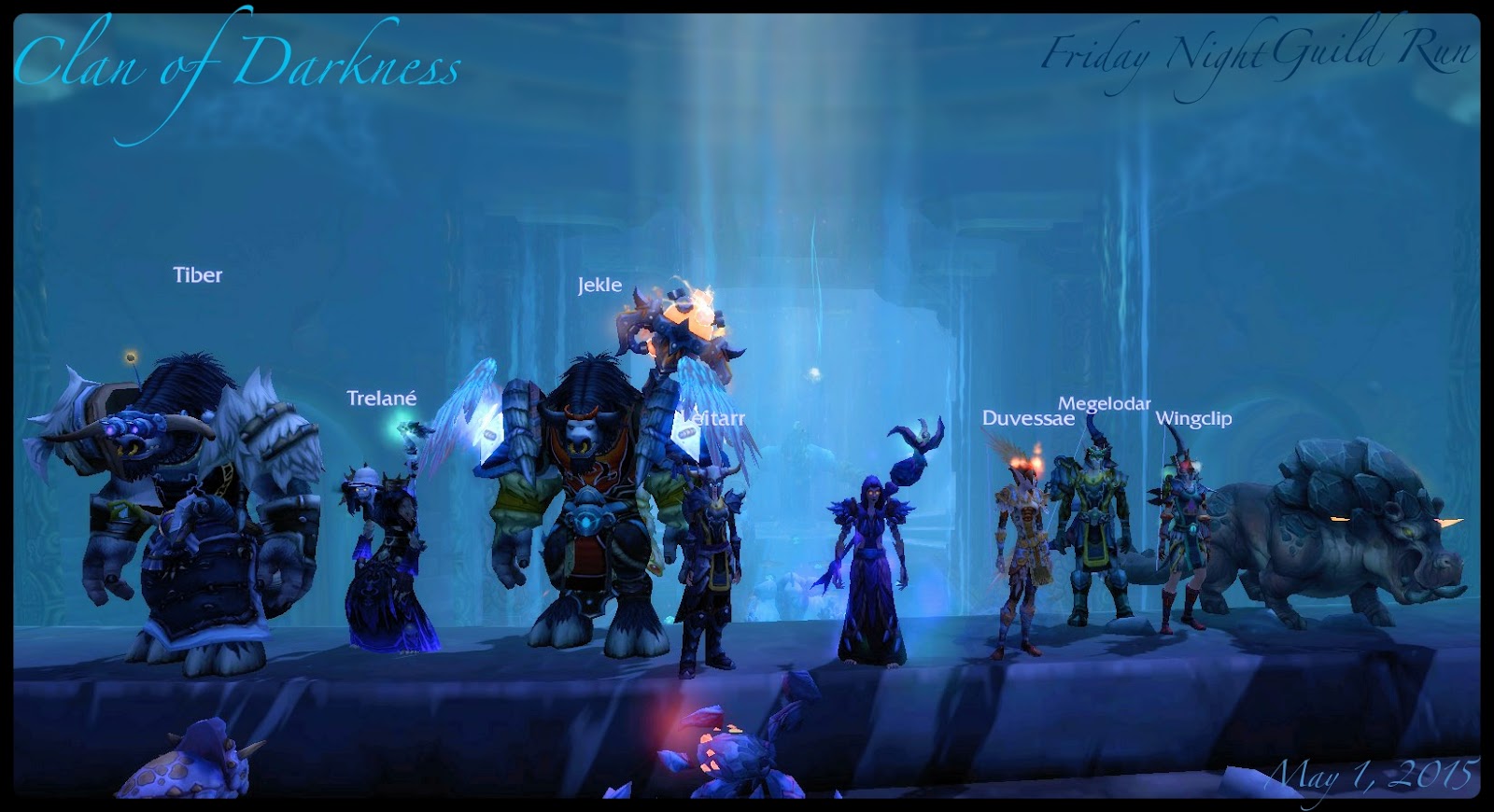 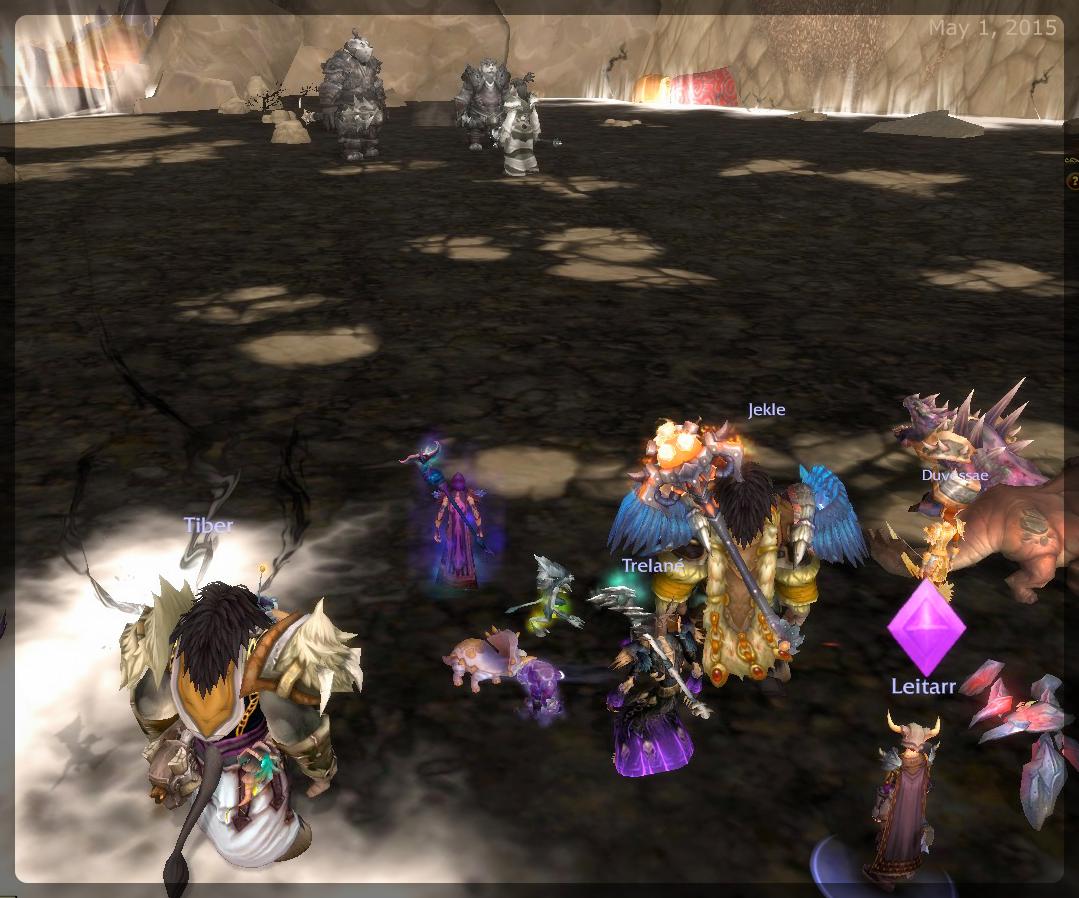 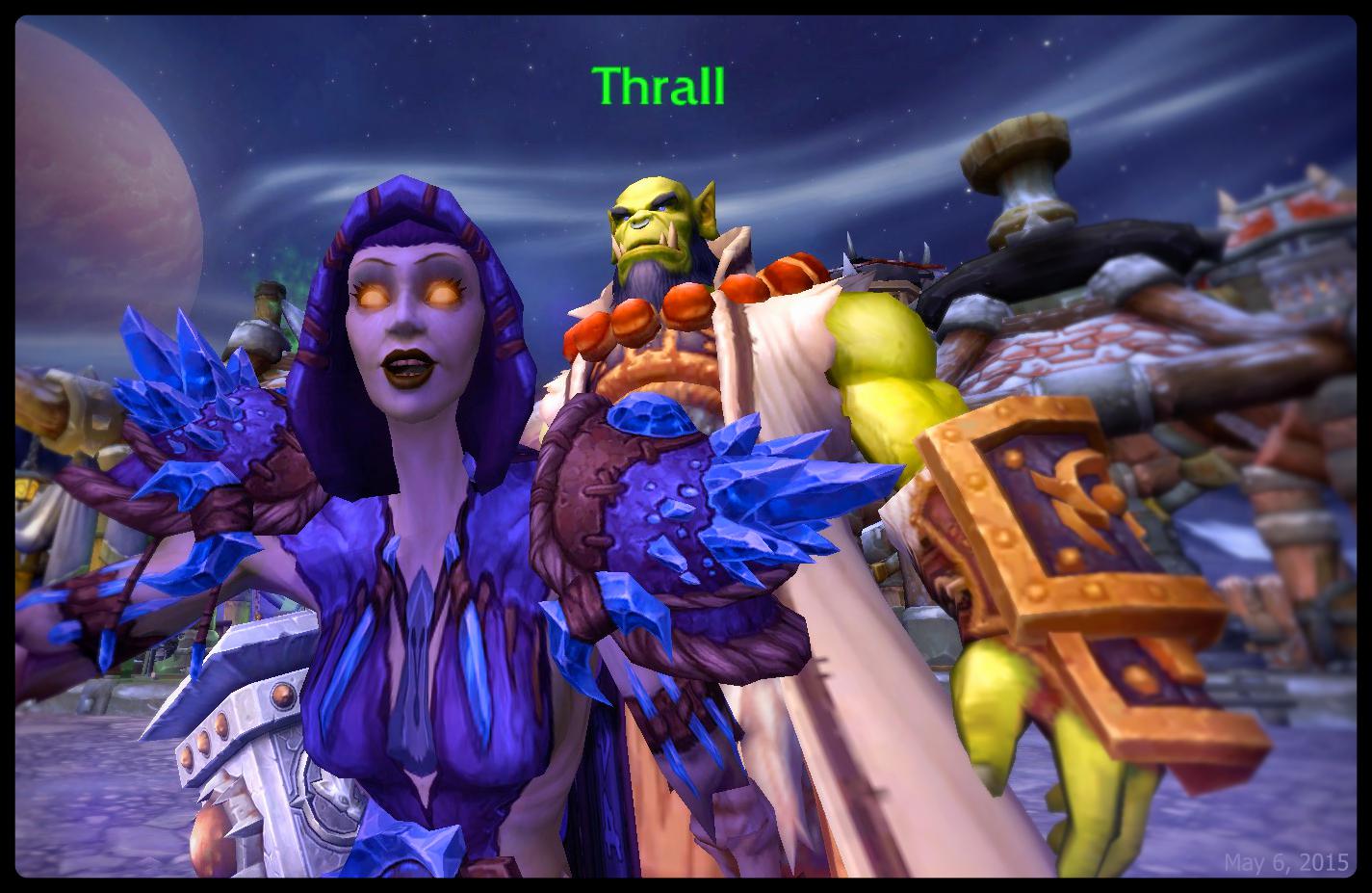 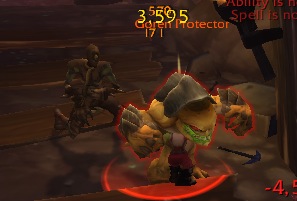 Miner doesn’t even try to help out.


Used my battlestone upgrade on Elk 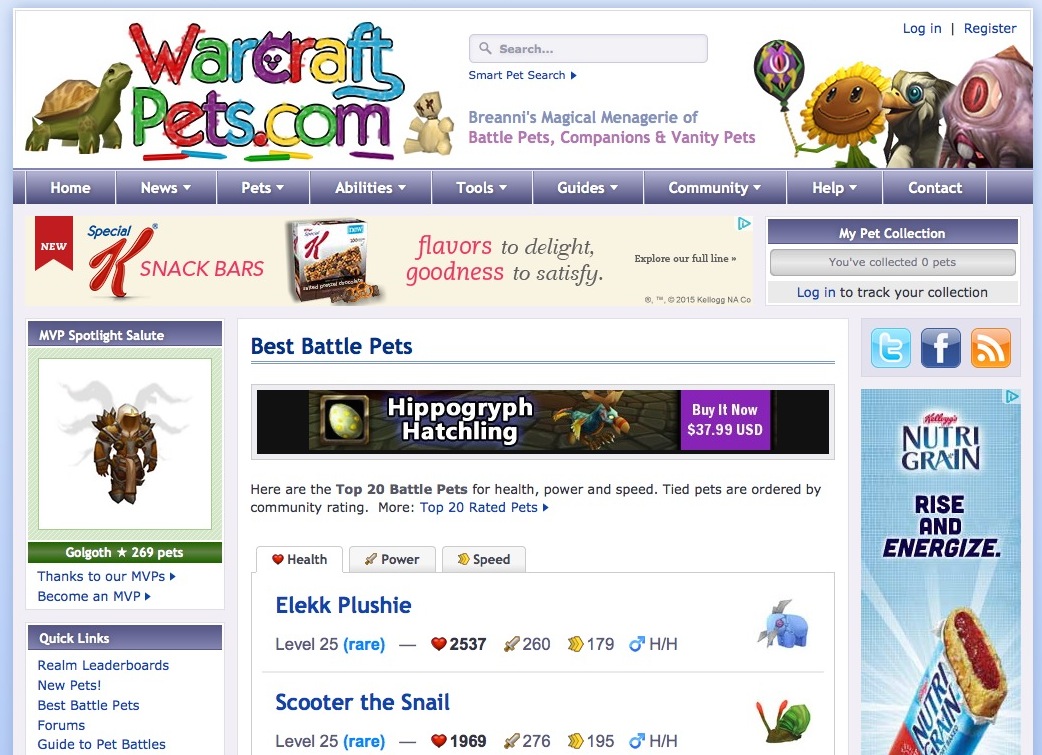 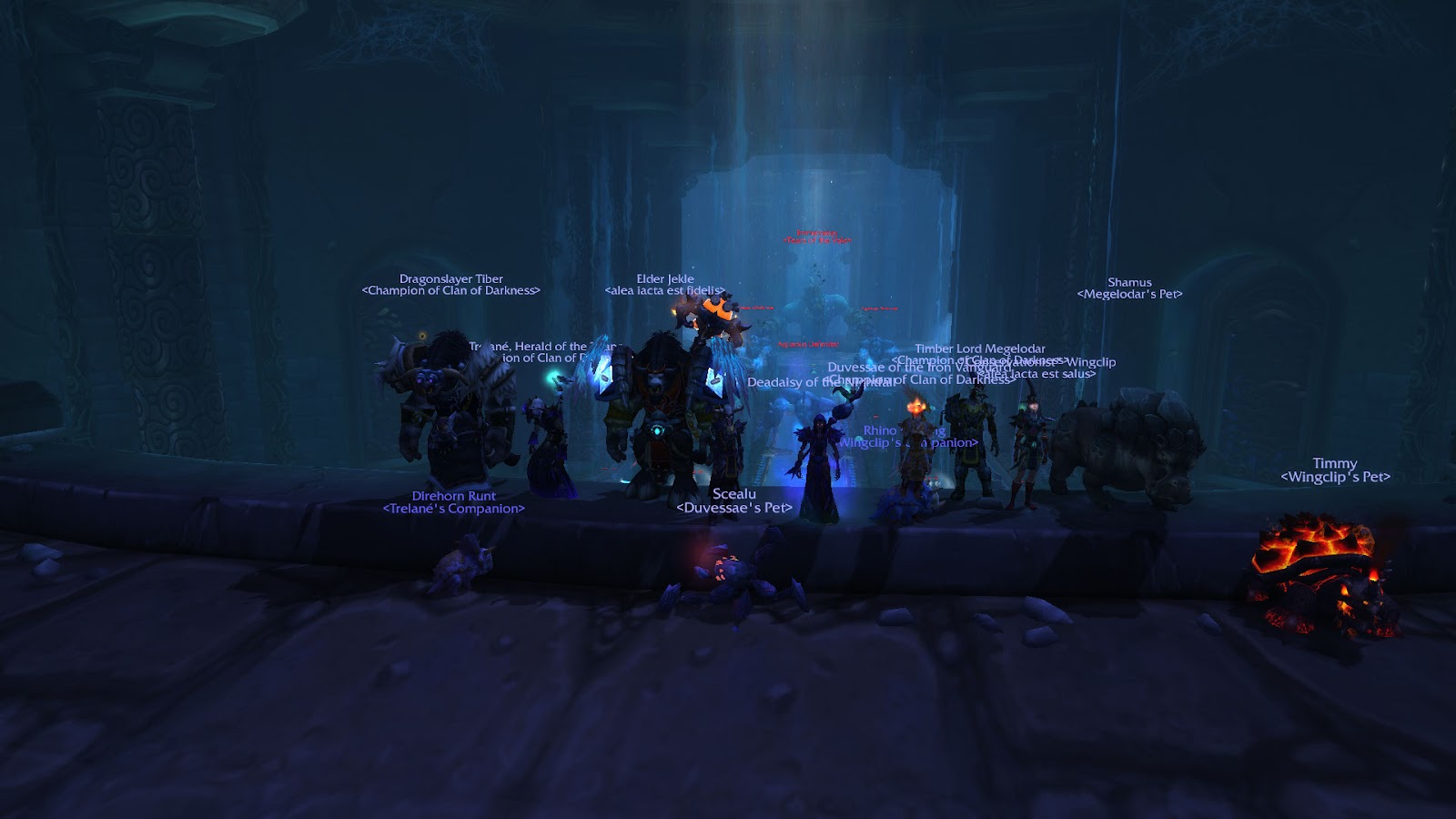 CoD Fun Run!
I tanked it on my DK!!! Was totally so much fun! 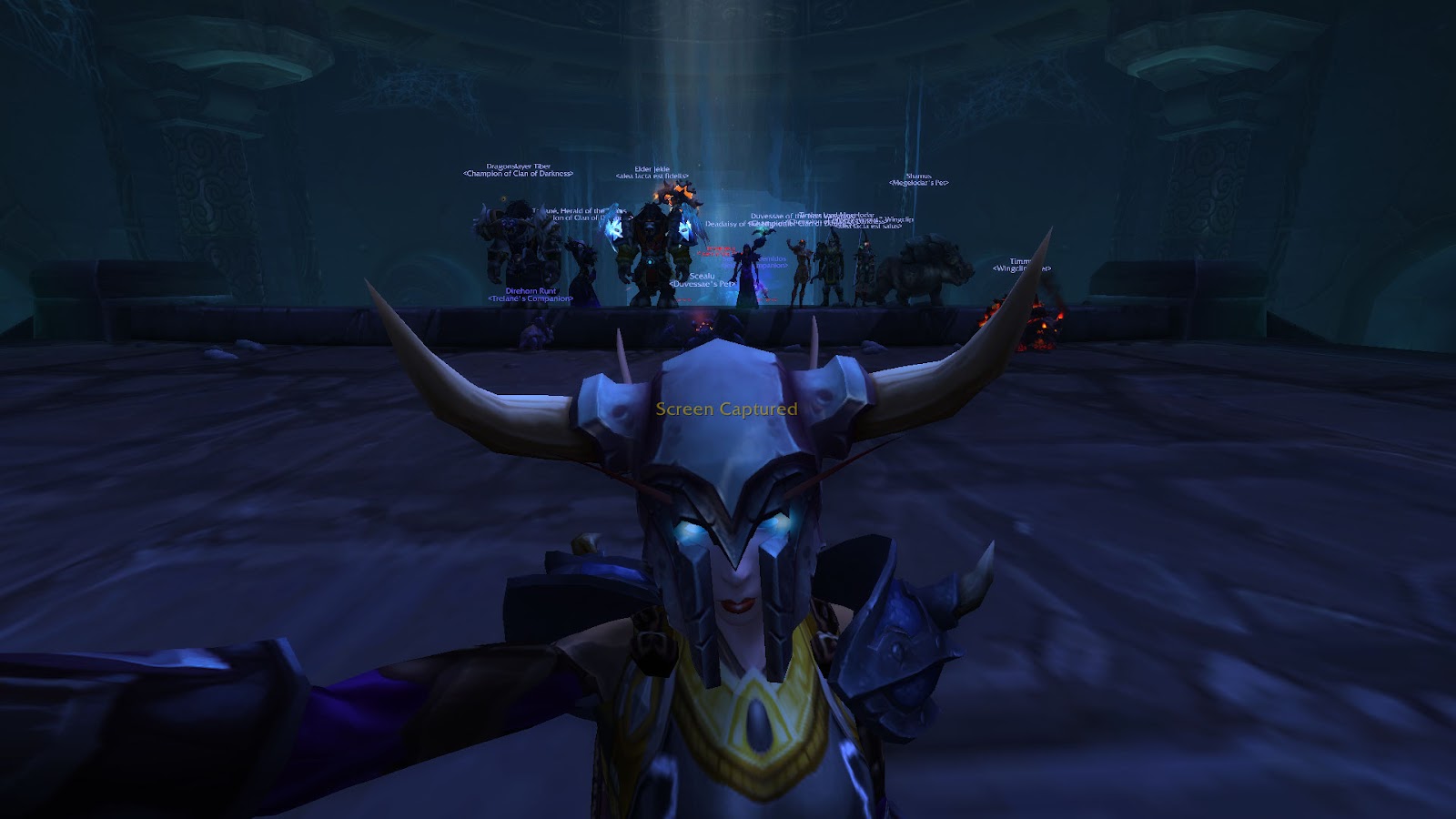 But wait… Let me take a selfie! 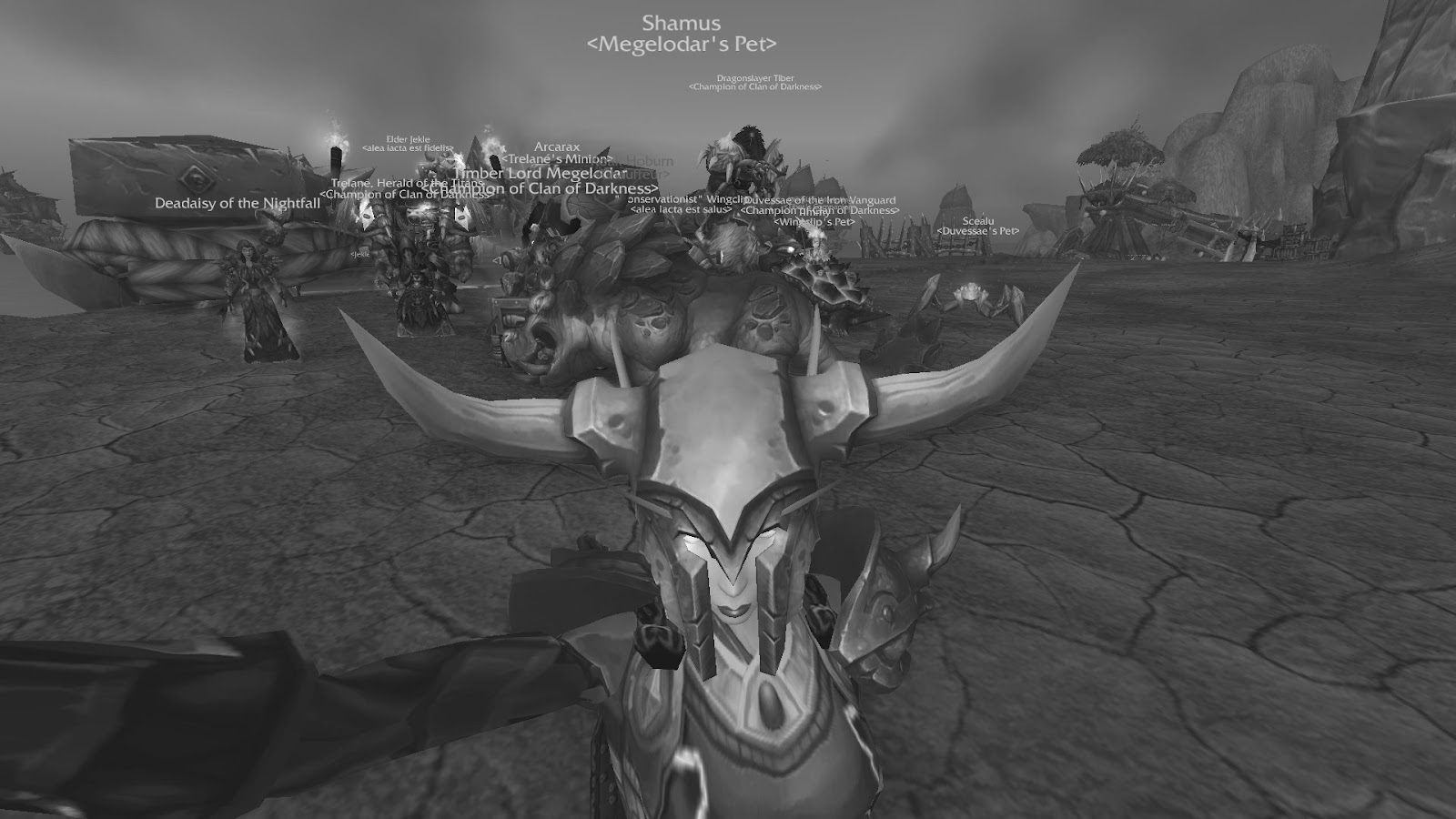 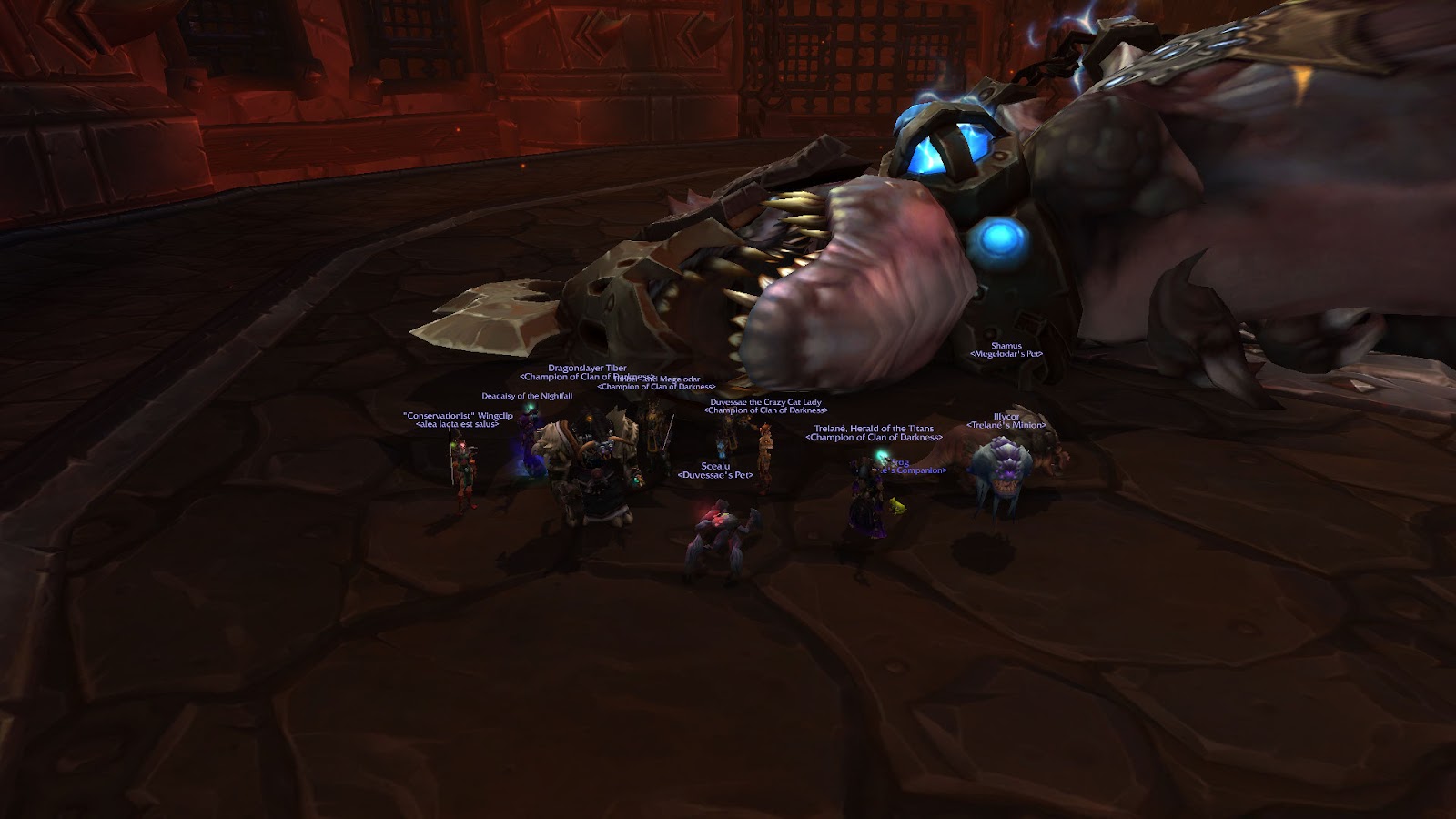 Thok Down!
Made it up to Garrosh and had 3 goes on him but just couldn’t quite get him!
2/ Boosted Druid
Was very excited to get all the flight paths in Northrend!! \o/ 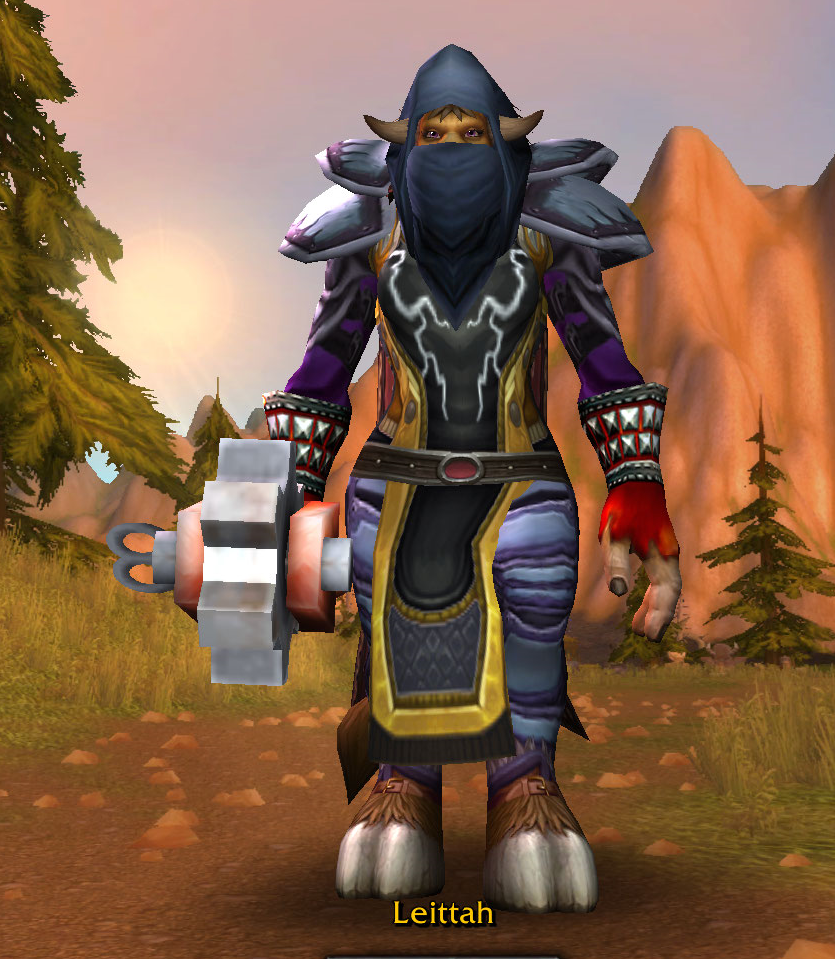 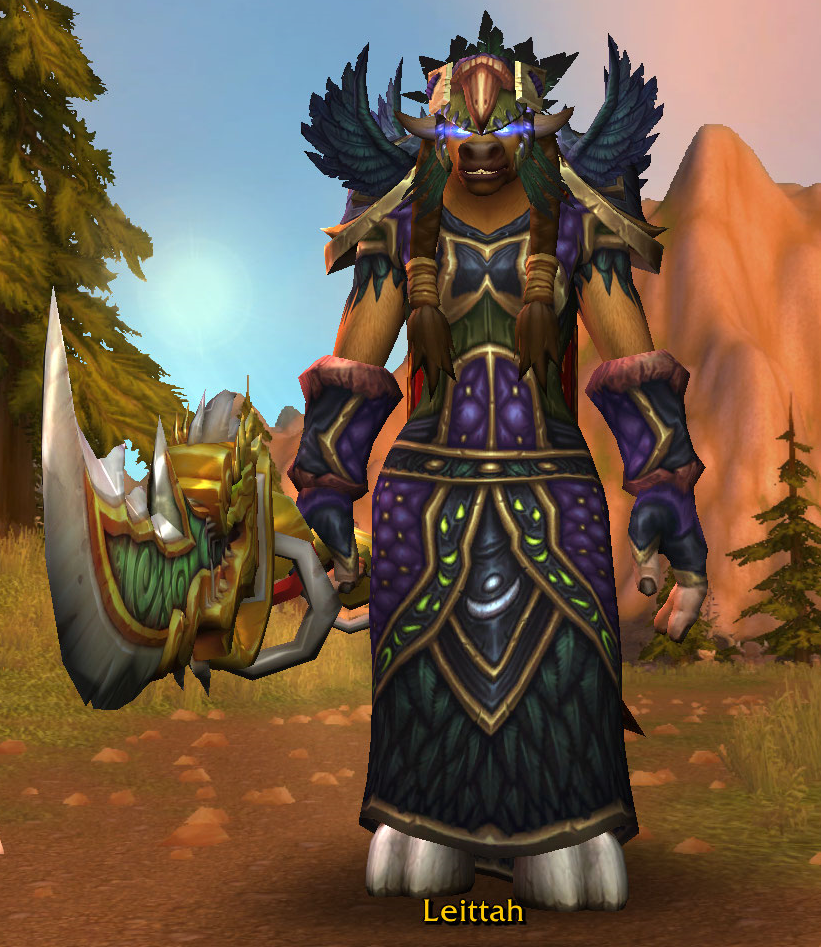 After!
3/ BloodThirsty
Alliance Draenai Shaman
Started in Draenai starting zone! Did few quests to begin (maybe 3) then decided no more - just going to kill and grind through mobs!
Made it over to Azurewatch and Level 7!
***Things to remember!***
1/ Do not play when tired!
2/ If i feel cocky about what I am doing - log off and do not play her!
3/ Think carefully when approaching new areas! 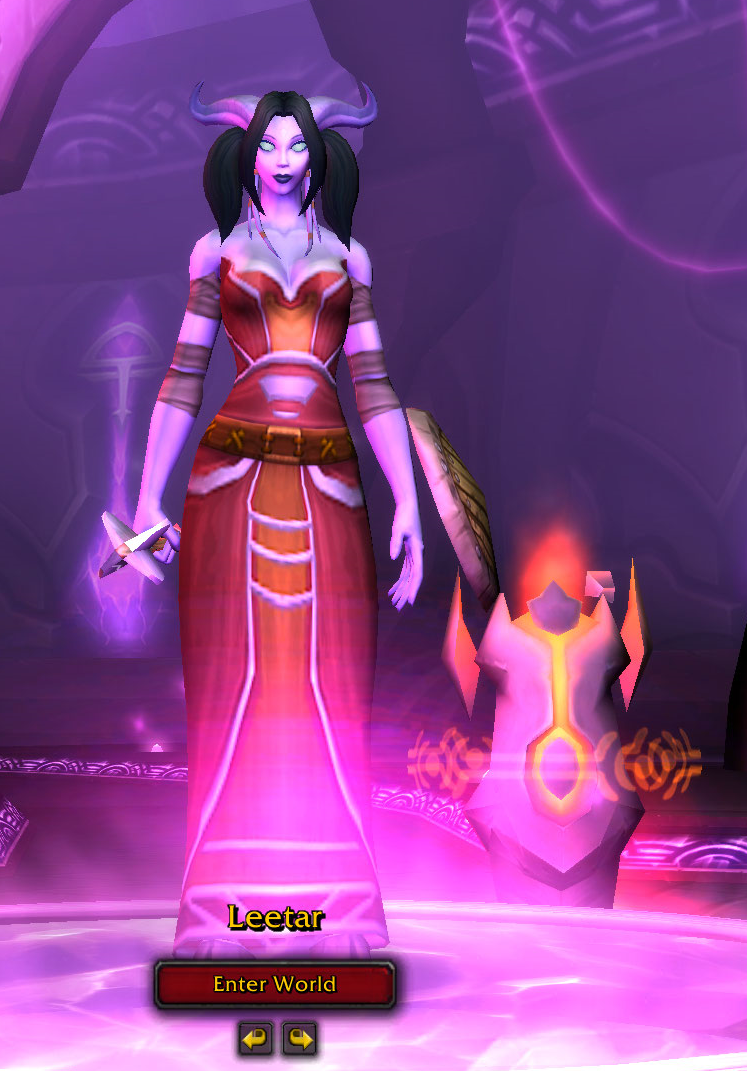 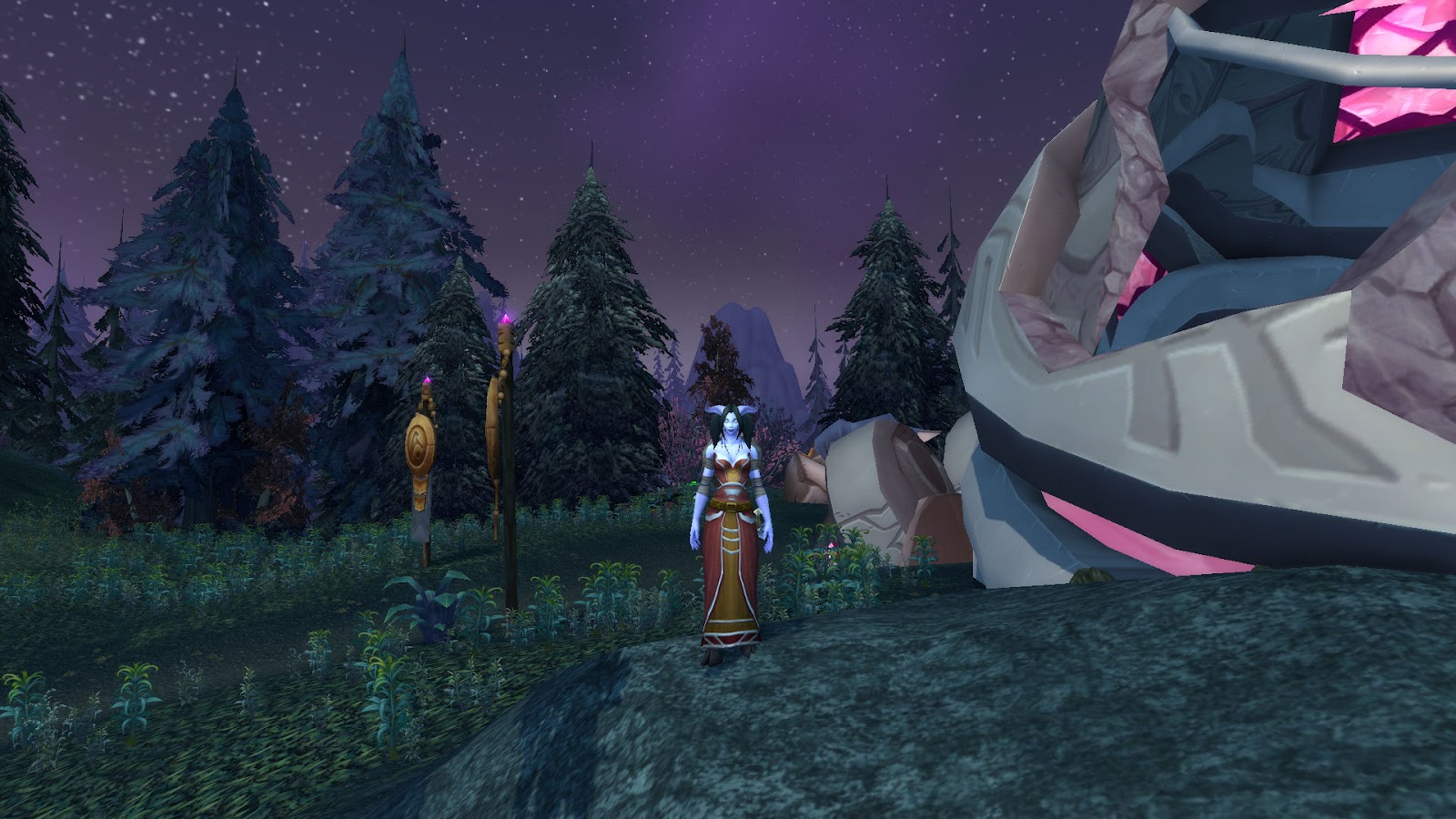 Level 7!
4/ Malware
Had 2 nights of trying to figure how on earth i got some sort of virus/malware on my computer!
Do you know how stressful that feels like when you have no idea what happened???  Stressed to the max!!
Finally fixed with the help of Natanie but took over 5 hours all up!

It’s not a draft anymore!
Hello Ctrl Alt WoW girls, @Patchworkgirl_g here
I’ve started this email a few weeks ago and kept it unfinished for a while in my draft folder, now I finally managed to wrap it up and hit thatsend button.
I hope you are all doing well :) Been listening to your show since last year and I just LOVE it!
First thing I do on a Monday morning when I get on the train to work is “push play > CtrlAltWoW”. Your show always gives me a good mood, so I can start the work-week with a smile. Maybe one day I manage to stay up till 1 am. at night and get into the chatroom to send hugs and kisses to everyone during live recording.
I’ve been playing WoW since 2008, done almost everything in game from progress raiding to PVP, role-play, levelling alts horde/alliance, leading a guild etc. but as it generally happens, we get older, RL gets serious and we have to put the toys aside… :(
I took a longer break from the game during Pandaria because I had to relocate with work to another country. I live now in Germany but I still play on an EU-English server. When I talk to wow players and tell them where I come from, first thing they ask me “why aren’t you playing on a german server?”
Germany has it’s own servers and you can also get the client in the same language, but I somehow got used the everything around Blizzard in English :P (blogs, sites, podcasts). There is also a games convention GamesCom here, which I attend each year where Blizzard makes an appearance and tries to bring a bit of BlizzCon to Europe, but the main target audience remains the german speaking countries.
I have included some pics I’ve took in 2013 & 2014 so you can get an image of how it looks like at the convention. I will try to send you later in August a few more after this year’s convention.  http://patchworkgirl.imgur.com/
Back to WoW….after managing to sort out a bit of work-life balance, I’ve returned to Draenor on a casual level. I do miss progress raiding but I simply cannot manage to get the time for it. Now days I spend my time in-game with collecting toys, running after achievements and doing daily garrison chores. I love every aspect of the game, even on a casual level, somehow it feels nice not to be under pressure and pursue other fun things in-game.
Big thanks to Rogueslayer for the tip of how to get from Timeless Isle to Gorgrond! My squishy Alt-Mage made it safe to shore using your guide from ep. 417.
Big thanks to Aprillian, Leeta and Tedrah too for all the little tips and adventures you mention and talk about during the show. I've really learned a lot from you girls of how to make this game fun and enjoyable on a casual level.
Bye for now! Keep up the good spirt!
@Patchworkgirl_g


Pets
Hey guys.
This expansion my pet collecting has become my main drive so i recommend using the upgrade stones on a hydraling, shore crab or winter reindeer or terrible turnip.
The Hydraling has a great shield, a strong chomp and rips up enemies at will. He often solos the garrison missions.
Turnip has a group heal and the ability to not kill what it attacks, vital for pet capturing and the group heal can keep your levelling pet topped off which reduces downtime between battles.
Reindeer also has a group heal and a so so stomp.
Shore Crab i just picked up last week and it is fantastic. Has a heal and a good attack. I love having that heal available. I think it might have a healing rain that lasts several rounds too, which you can cast just before you switch out pets.
These are not pets people insist are the best, but you will be doing a great deal of pet levelling and these will make it easier for you to raise the pets you do need, up to 25. And, they are all pretty easy to get.
Spawn of Onyxia is a nice dragon kin with a good heal, and breath weapon plus tail slap.
Harpy youngling has done good work for me as well, it's base attack throws 2-3 quills and is fast so usually goes first.
One thing to consider when capturing wild pets is their breed. I don't think you can tell breeds until a pet is captured but breeds adjust the stats on a pet to have more health or more speed or more damage, so the breeds that are more fun for you will help you enjoy your battles more I think.
You will need one 25 in each family, no family is better than another because of the changing families you will fight, unless you focus on just a few battles.
And lastly, a levelling trick is to put one pet, say level 5, first in your lineup then go fight a lvl 15 pet in the wild. Do damage first thing then switch out the levelling pet so the other two who are 25 can kill the 15s.
The levelling pet only needs to survive one hit and will get bonus xp for fighting higher enemies.
Some prefer to switch the low pet in mid fight then out, but then he has to survive potentially two attacks. Much more dangerous.
Oh, Alterac Brew Pup is also a good pet having that heal.
I like to discover my own pet teams to fight the boss battles, rather than going with what everyone says to use but I am more relaxed I think, and want to enjoy puttering around with my collection not turn it into work.
I can beat Jeremy Feasel and most of my garrison battles so far, so good enough till I level more up.
Alisaunder


In WoW
I have about 30 alts across 7 servers, 5 garrisons and no time left in the day so lately I've cut back on the mines and gardens every day plucking.
I set up missions on as many as I can bear to deal with, do my garrison pet battles to start building up charms for 6.2, renew my furs orders at the barn and then I breathe.
If it is Monday I farm fur crates while listening to podcasts.
Tuesday Wednesday I farm Highmaul for the stones Khadgar wants or Foundry if I can stand it.
Thursday pet battling in the wild. Maybe some old raids for rep or pets or mounts or for fun.
Friday I play Civilization .
Saturday listen to more podcasts and farm more furs.  Farm new pets. Auction House. Whatever feels like FUN. Then raid in evening.
Sunday more podcasts including one I am on, more pets. More fun.
This week I worked on pet battle achievements, collecting pets in Silithis and Thousand needles with a stop in at Onyxia. Got my rogue to 100 and her garrison to lvl 3.
Levelled up a new hunter to 10 because I'm crazy and a podcast was live. :)
Ran Sky Reach on the mage I don't know how to play because I felt like completing an inn mission. She's 100 with table mission gear and even not knowing how to play a mage well was top dps which was scary to think of.
My shadow priest bonus rolled the Foundry staff on Gruel she desperately needed and got a great pair of purple shoulders from the table Foundry cache so transmogged her ugly dress to a lovely purple dress from Wrath and a Zandalari staff.
That's about it. On warcraftpets.com I'm #85 on my server in the top 25,000 in the US and I love that.
Alisaunder 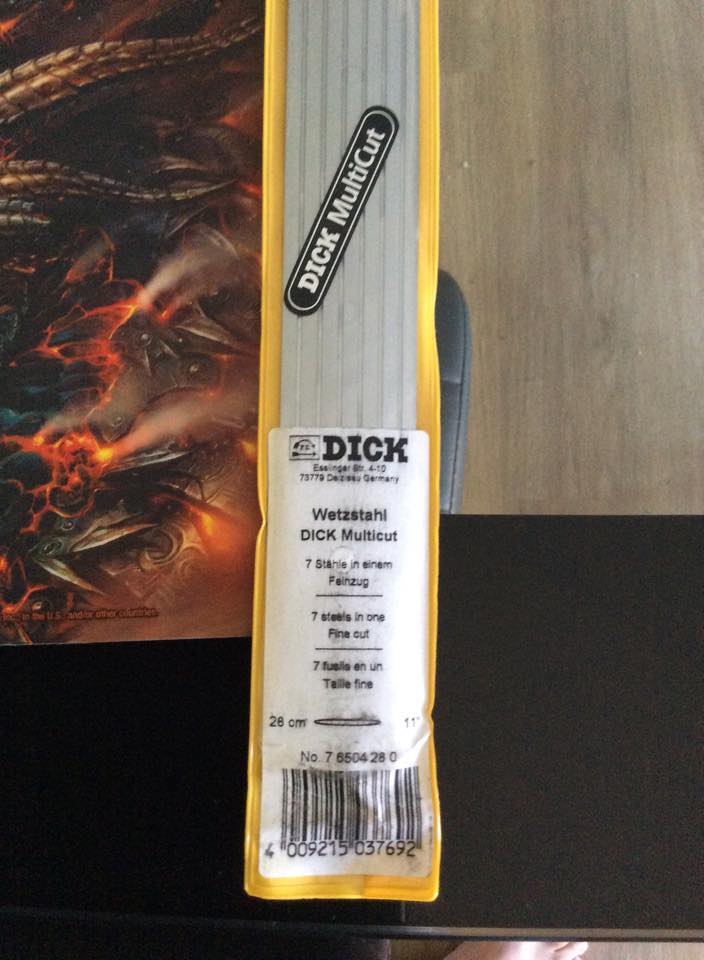 
Sent from my iPad air


Enjoying getting Bloody
Hello CAW Ladies,
Well I am writing to you lovely ladies to tell of the new fun I am having. I was levelling a bunch of my level 90's to 100 as you do, then I heard about the Blood Thirsty Challenge from Leeta, Ashayo and Wingstar. I am almost always up for a new way to level so I joined in and made a new Character on an Oceanic server. We went Alliance and I chose a Druid called Bloodyclaw. We decided to level to 10 to start which didn't take that long but I was hooked. So I made a new toon for the Challenge called Bloodymata. She is a Night elf Hunter. I have two things I am actively trying to do and they are to Not die and to get to the top of Leaderboard. As of Friday Night She was level 24 and she is now in the top 10.
Anyway Ladies just thought I would tell you of my progress. I tell you only being able to do 3 quests per level is killing me. It has the slowness of levelling in Vanilla. Better get back to it!
Bye!
Matahorn

Wingy for cleaning up the bank

Posted by Aprillian at 8:48 PM