I hope you're all doing GREAT this week!  I ran a teensy bit longer than usual...I guess I had more to tell you than I realized, hehe...


p.s. Music is from Ulduar! https://www.youtube.com/watch?v=CZ7xjDGo-XA 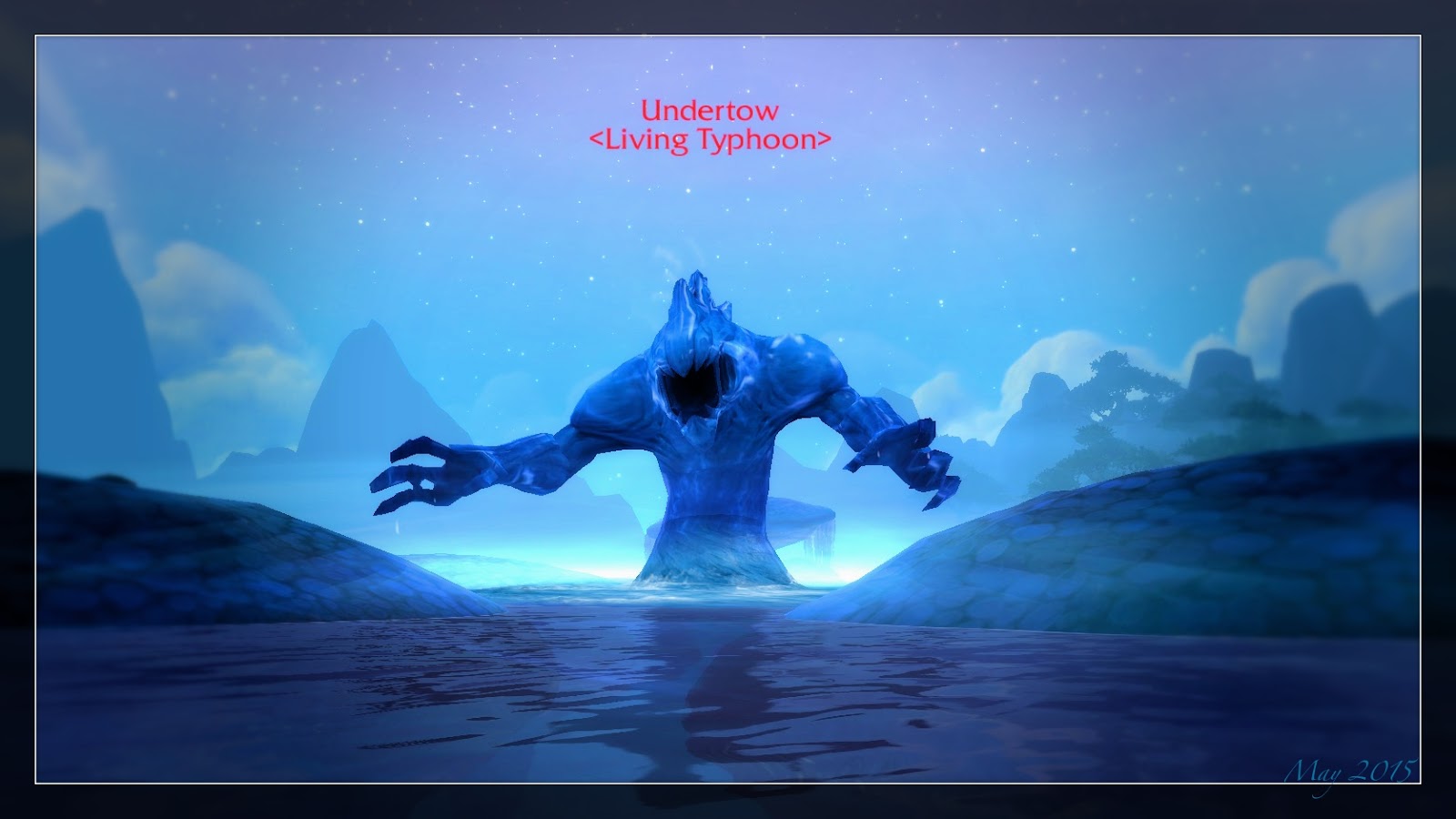 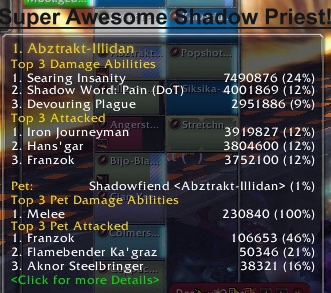 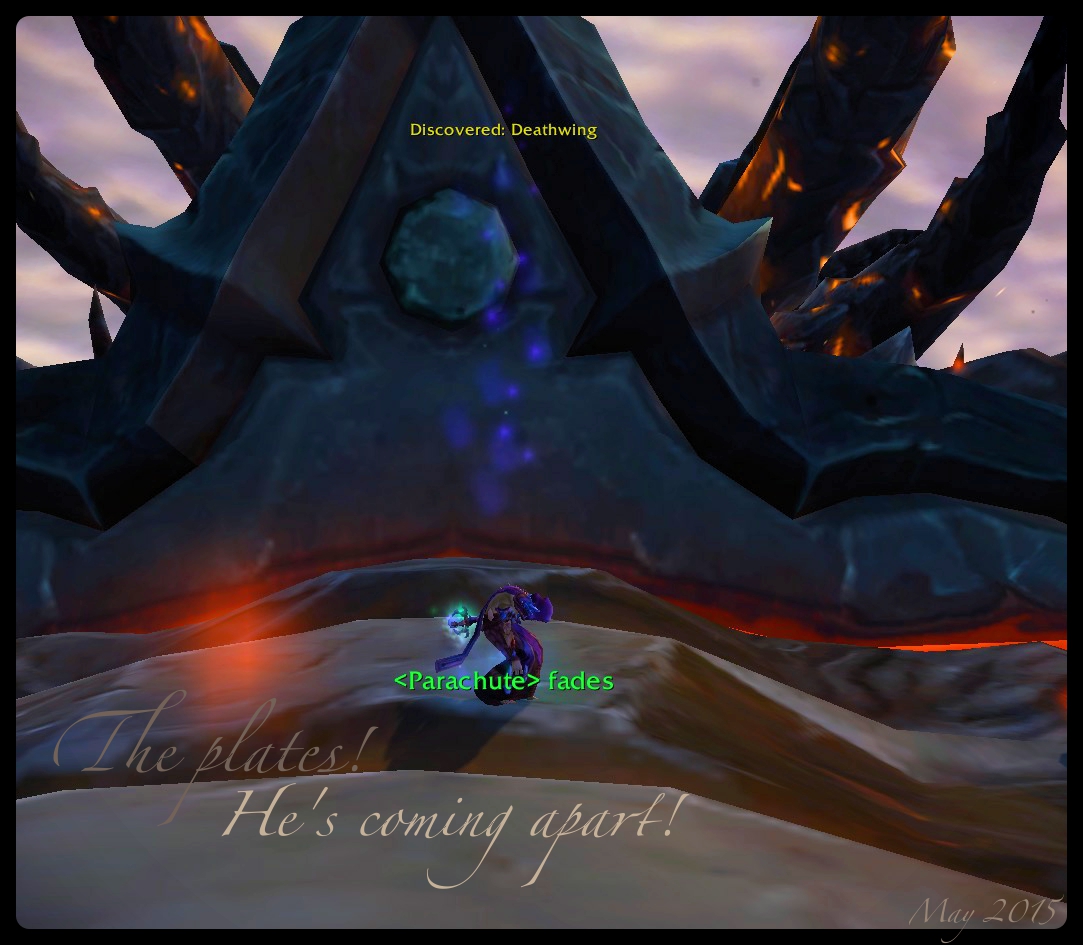 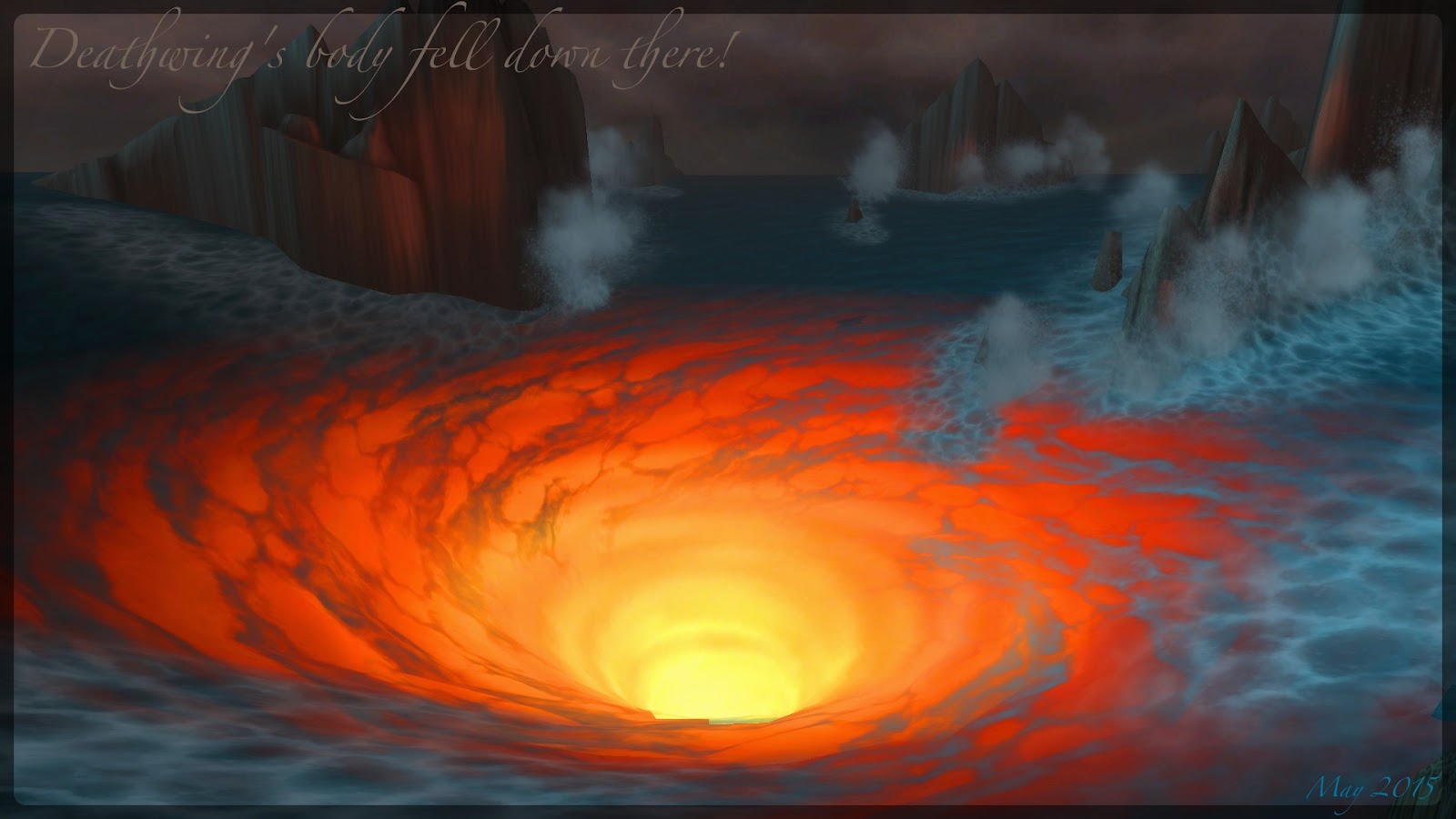 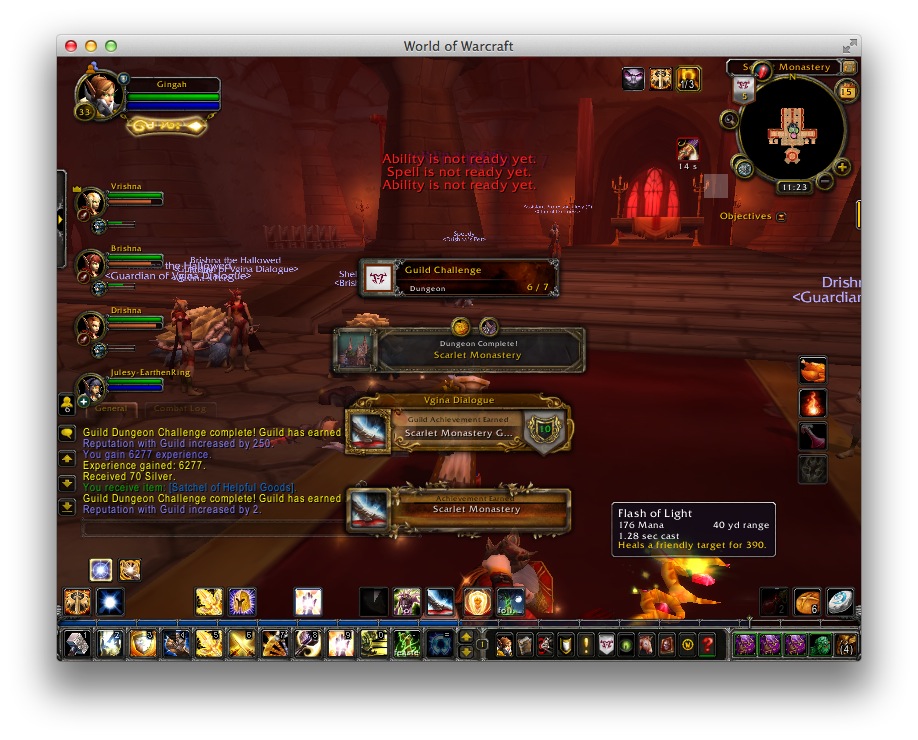 1/ Celestial Tournament on Timeless Isle
With 203 Lvl25 pets you would think this should be cake…
Yeah no!
Still didn’t have the right combination of pets to get through the first level!
2/ Blood Thirsty - Leetar
Went from Lvl7 - Lvl12
Registered on the WoW Challenges website once I hit Lvl10!
http://wowchallenges.com/index.php?Show=BloodThirsty
Killing and looting over near Blood Watch - flowers, bears, murlocs, more flowers, more bears, oh and corrupted trees! 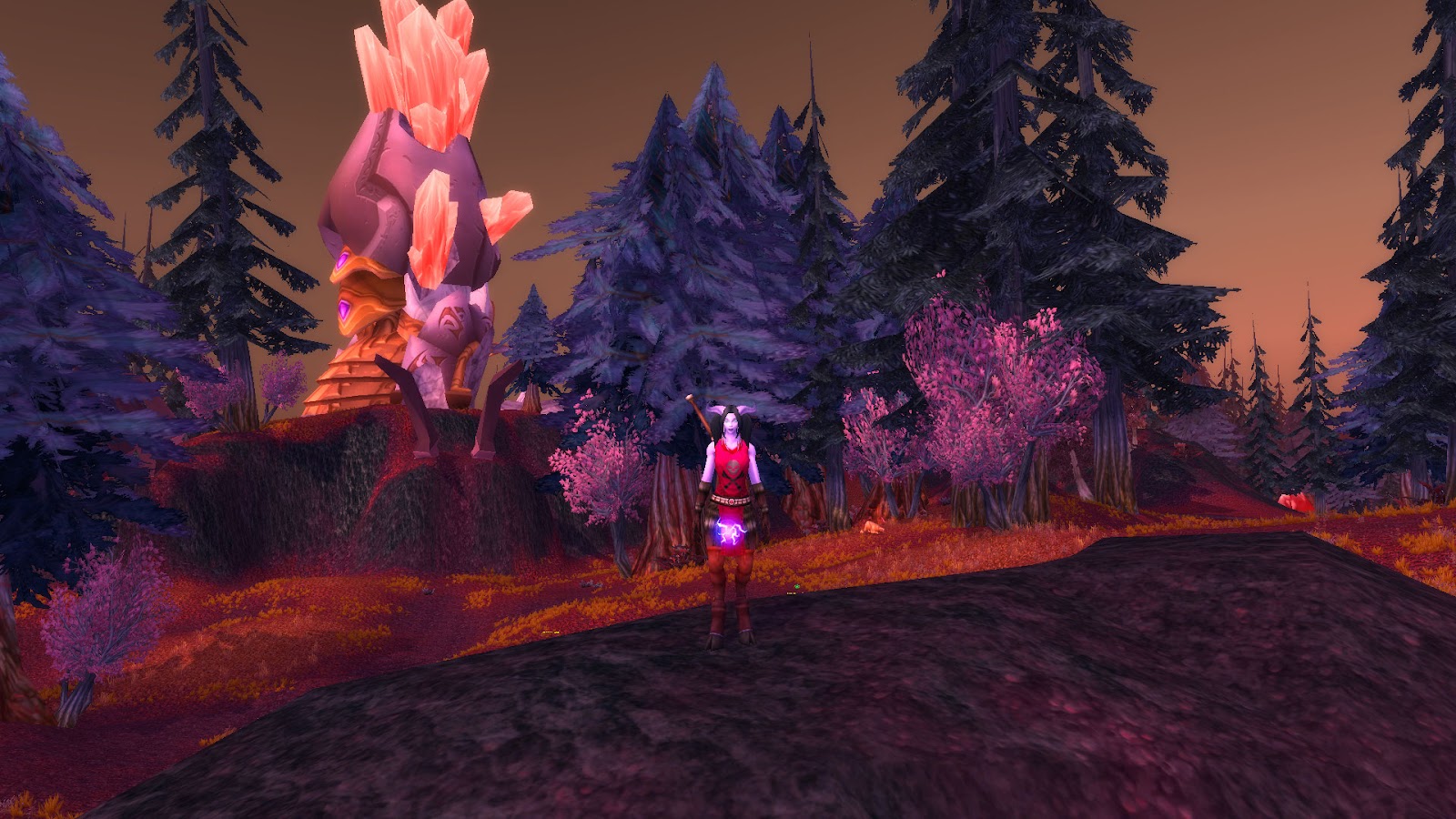 Ding Lvl12!
3/ Healers - Pally Lvl44 -45
Undead Stratholme
Mobs were 6-7 levels higher then us… yes we are a little crazy at times!
We did manage to get Baroness Anastari down! \o/ 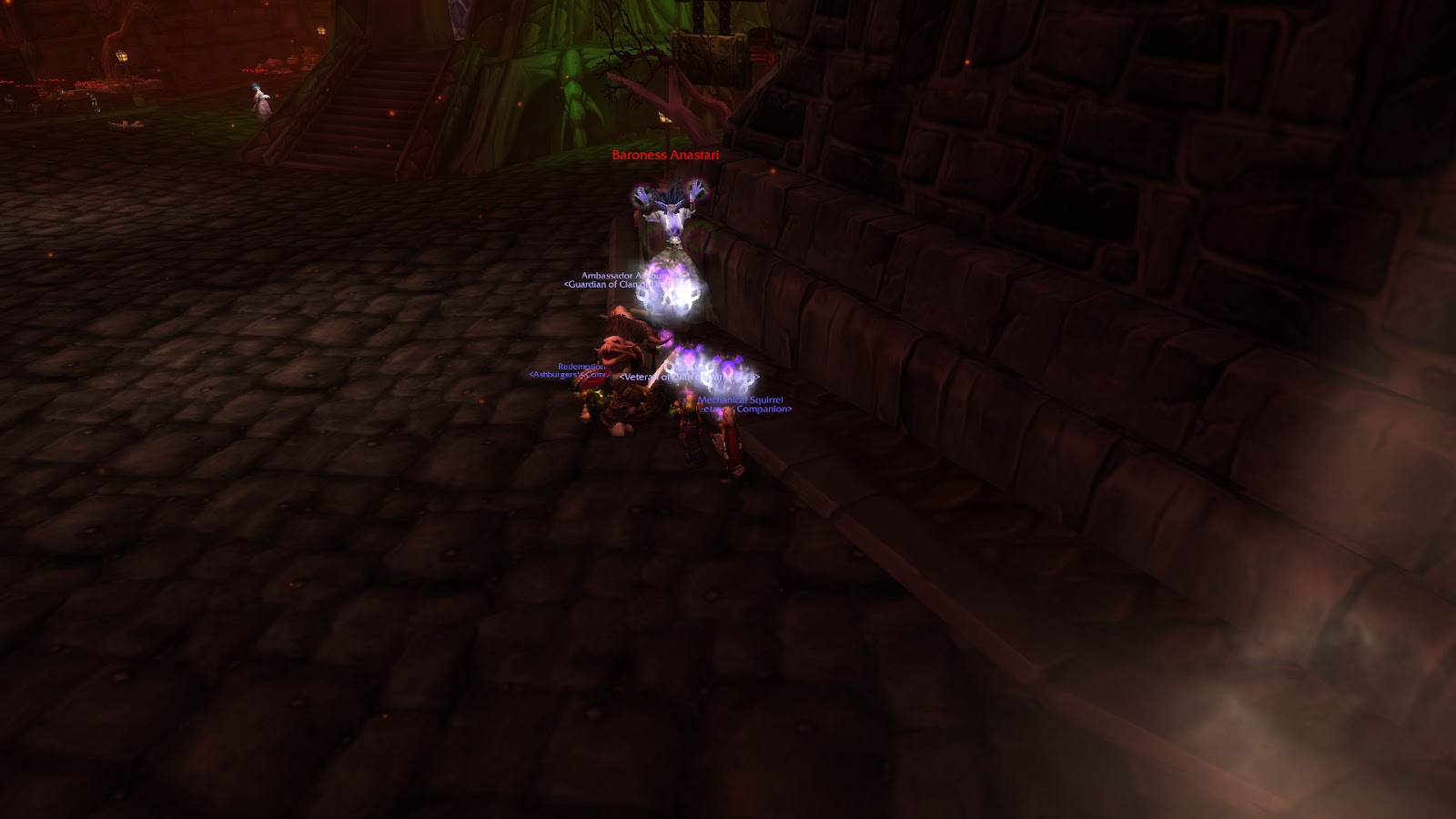 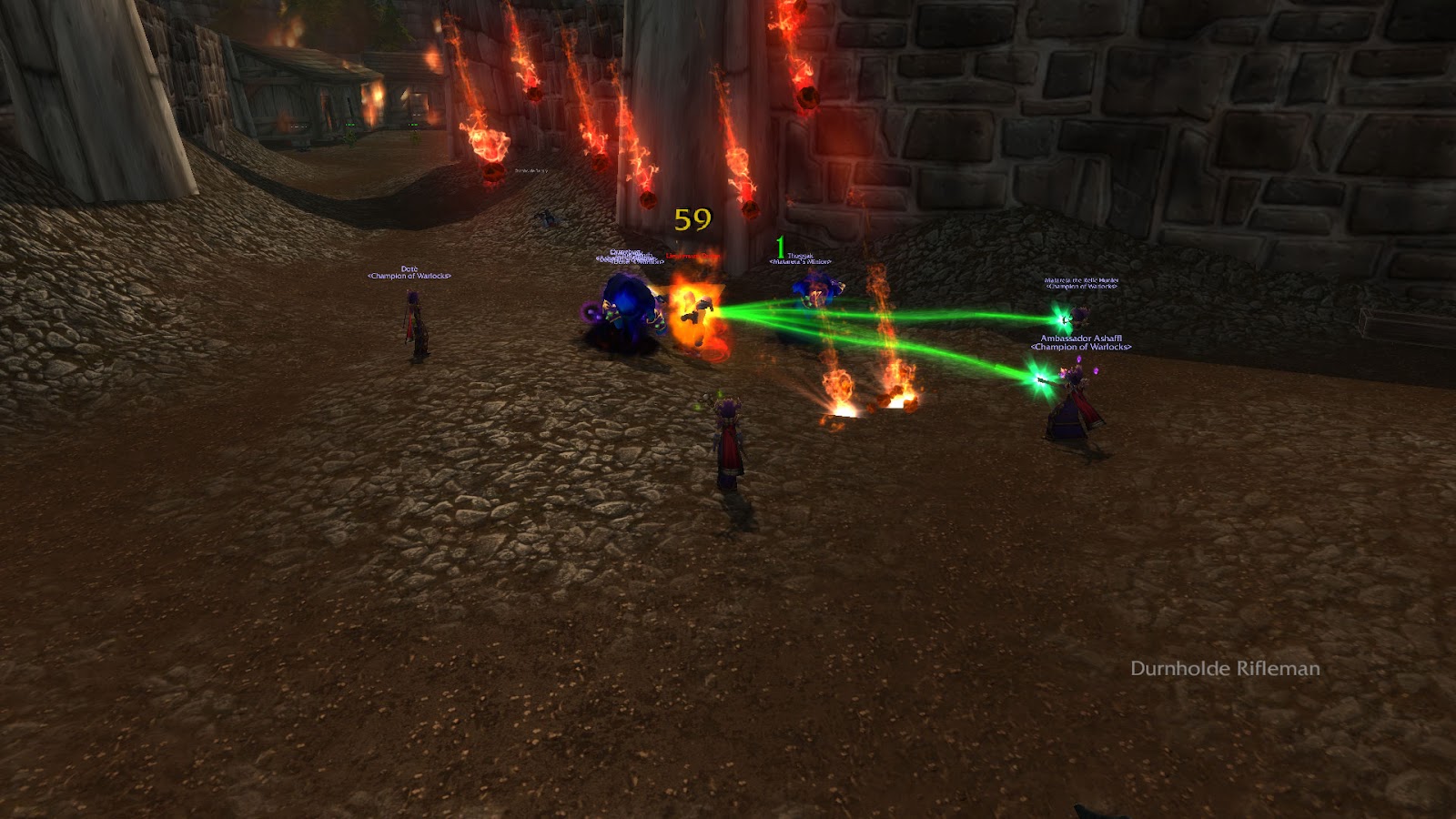 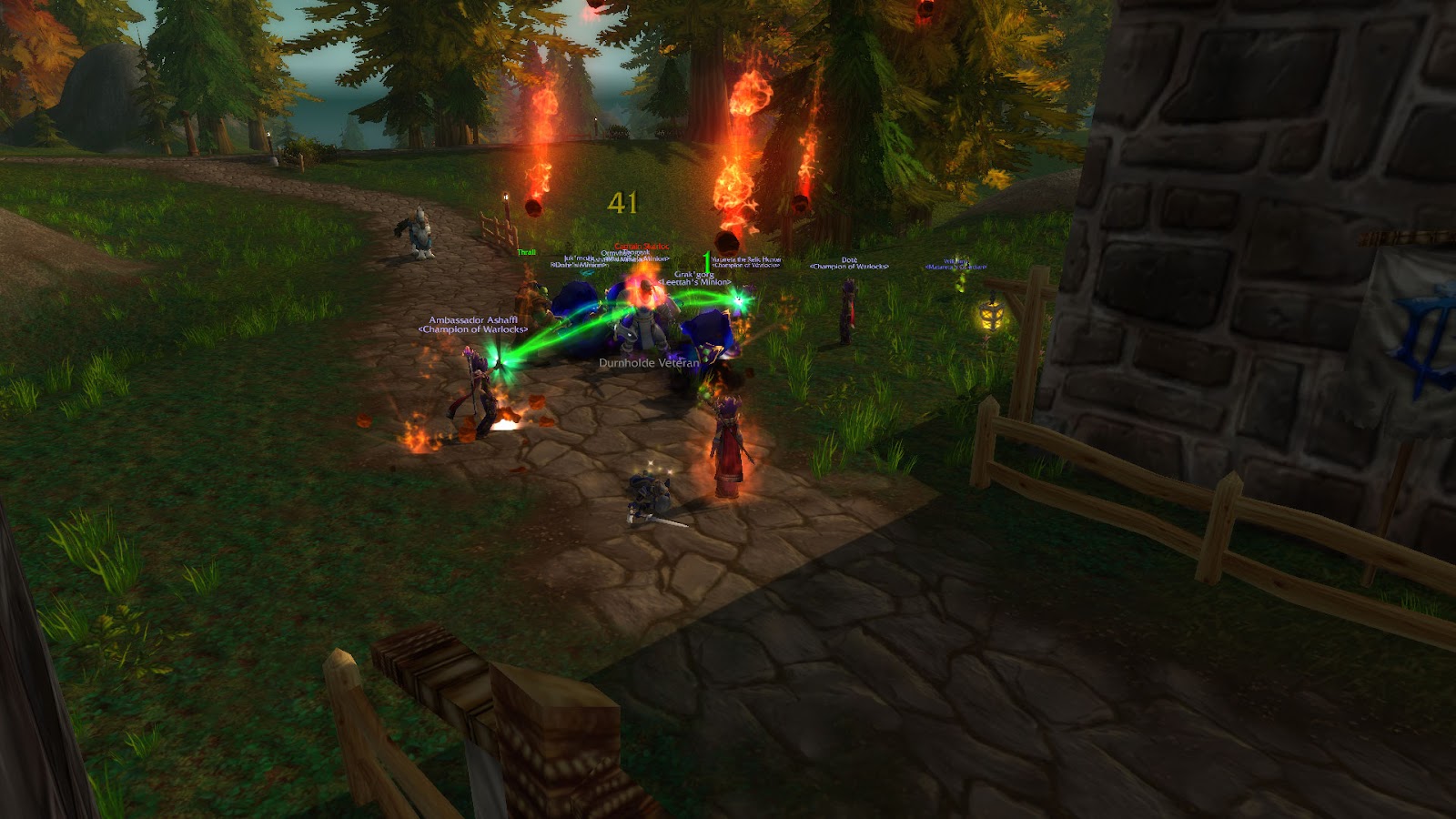 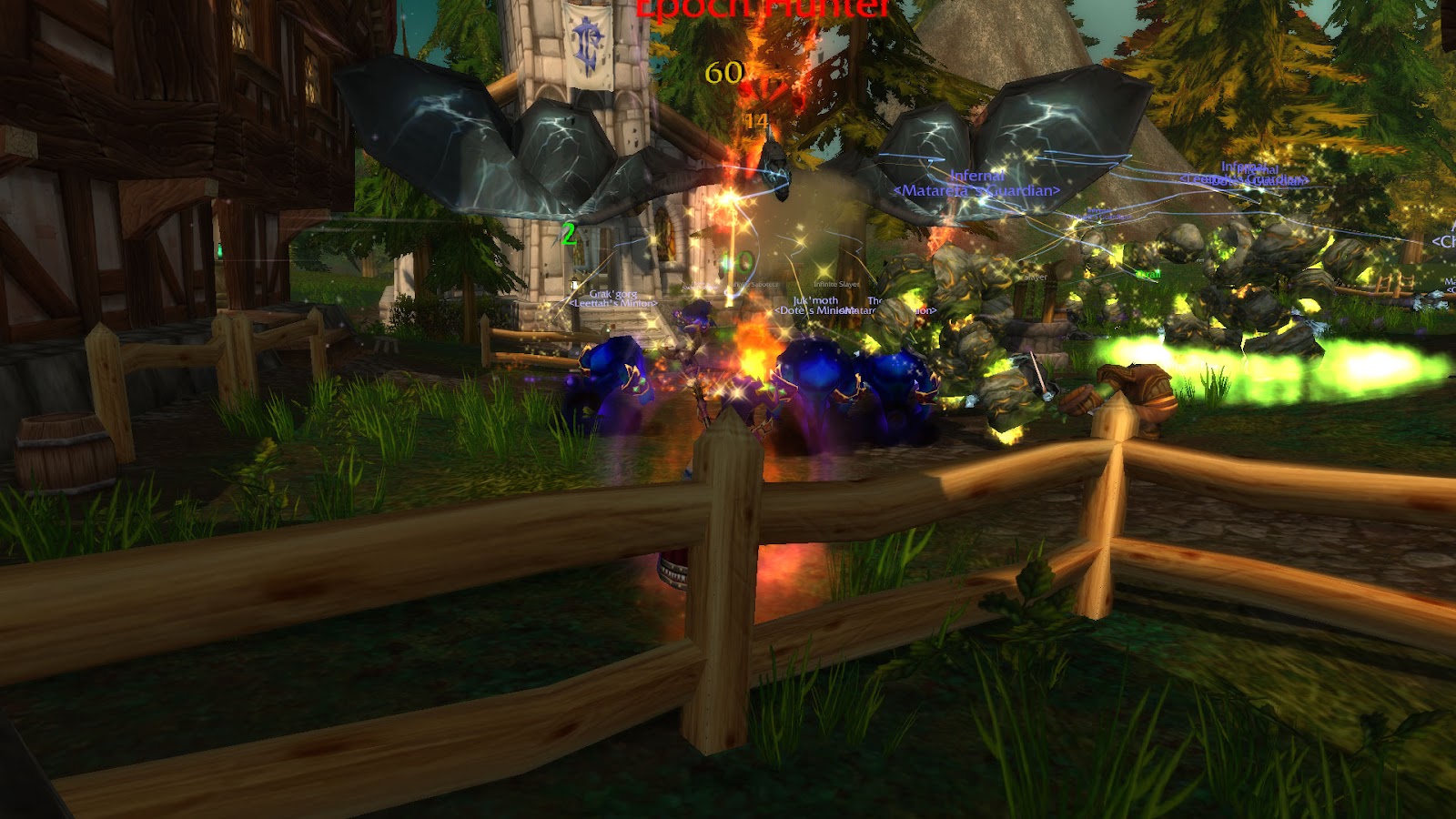 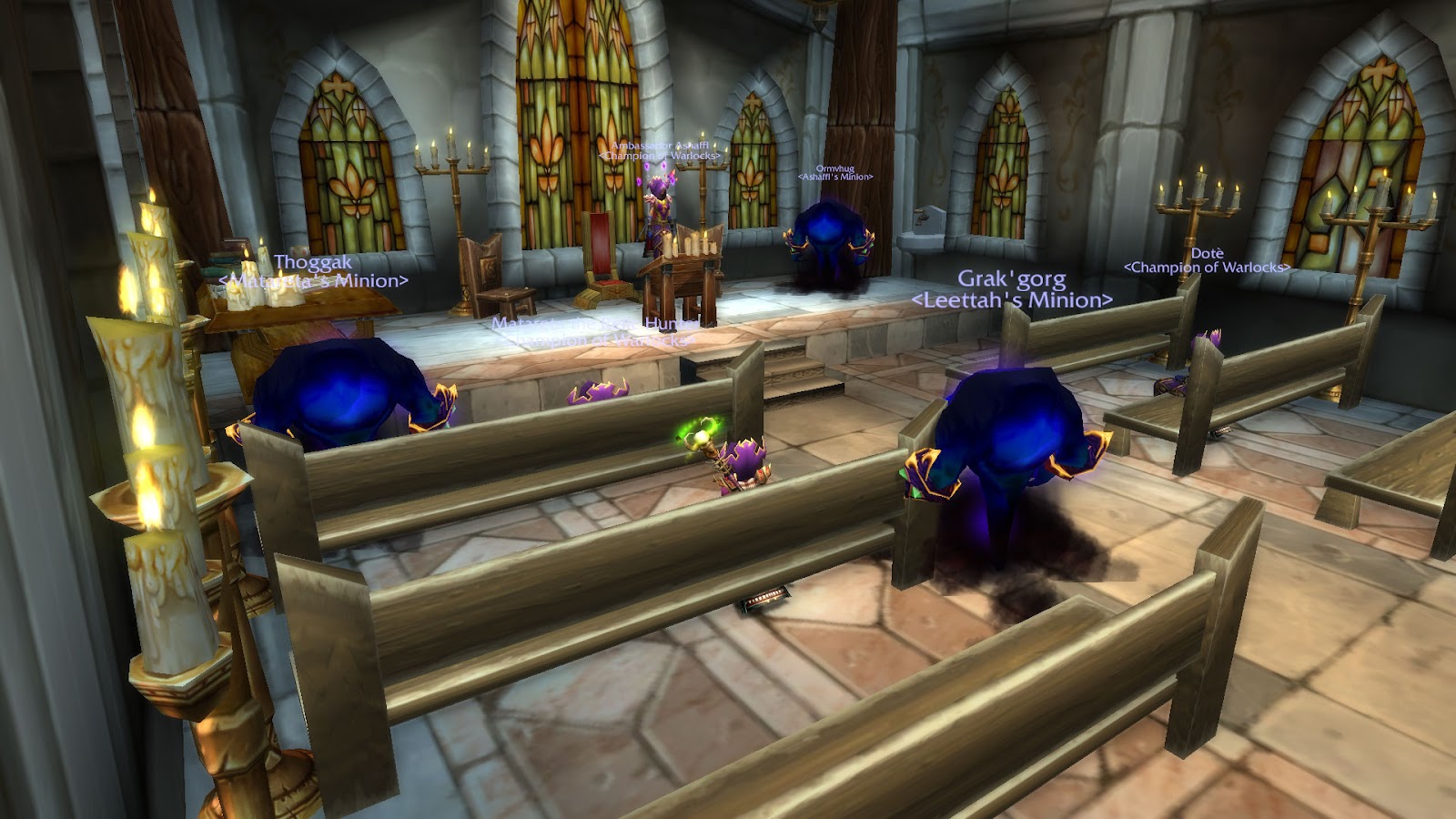 Reflections of a Warlock! 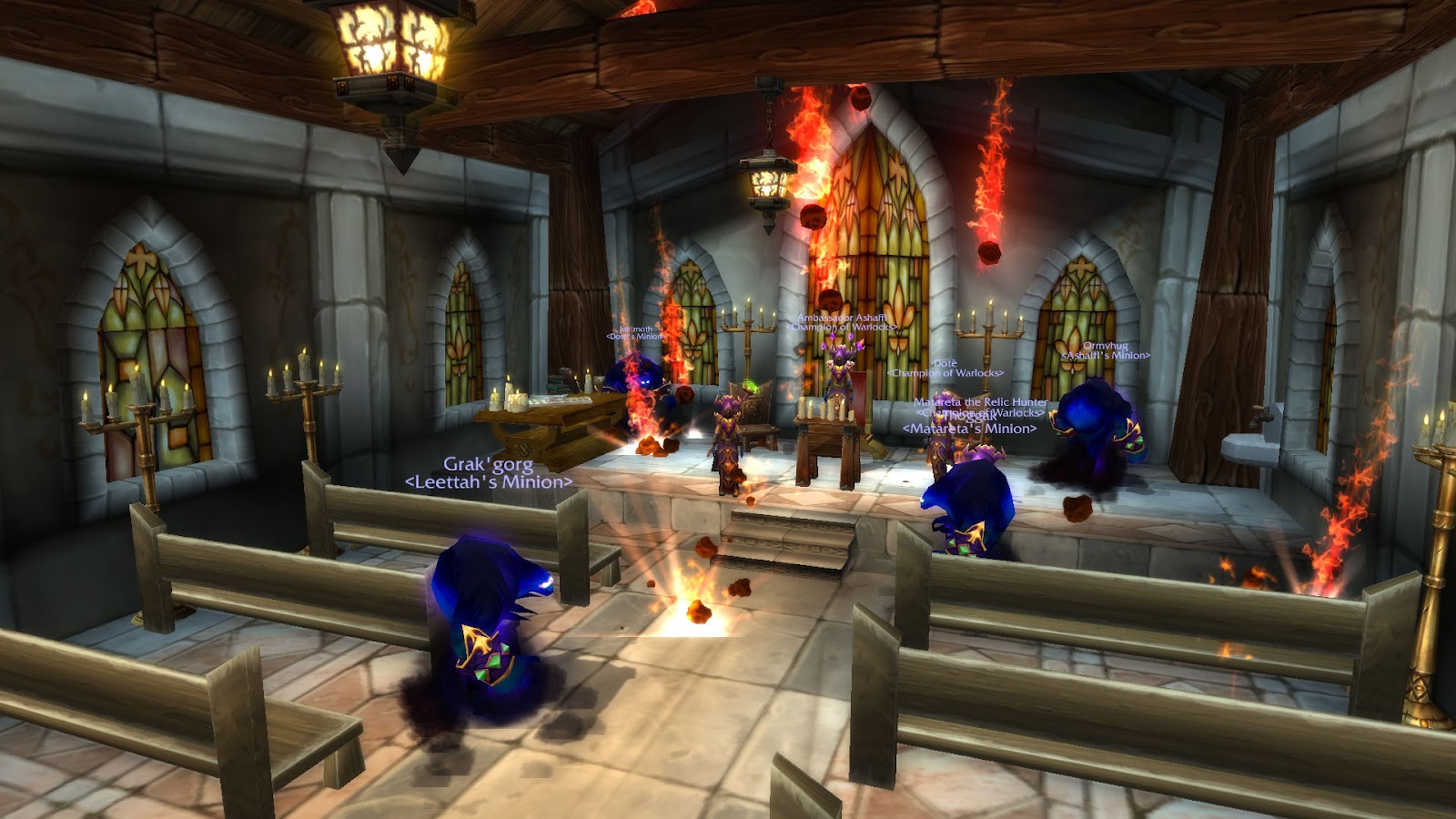 Church Warlock Style!
5/ Mount Runs
Decided I would venture into some solo raids for a chance of a mount!
DragonSoul - managed to get to Spine but alas could not solo it!
Then decided to go see Lichie!
So ICC 25m Heroic and I got through it all but alas no mount!
I think the hardest fight to solo is actually Sindragosa coz of the ice prisms but am managing to work it better!
Blizzard released the new store mount Mystic Runesaber!
https://us.battle.net/shop/en/product/world-of-warcraft-mount-mystic-runesaber 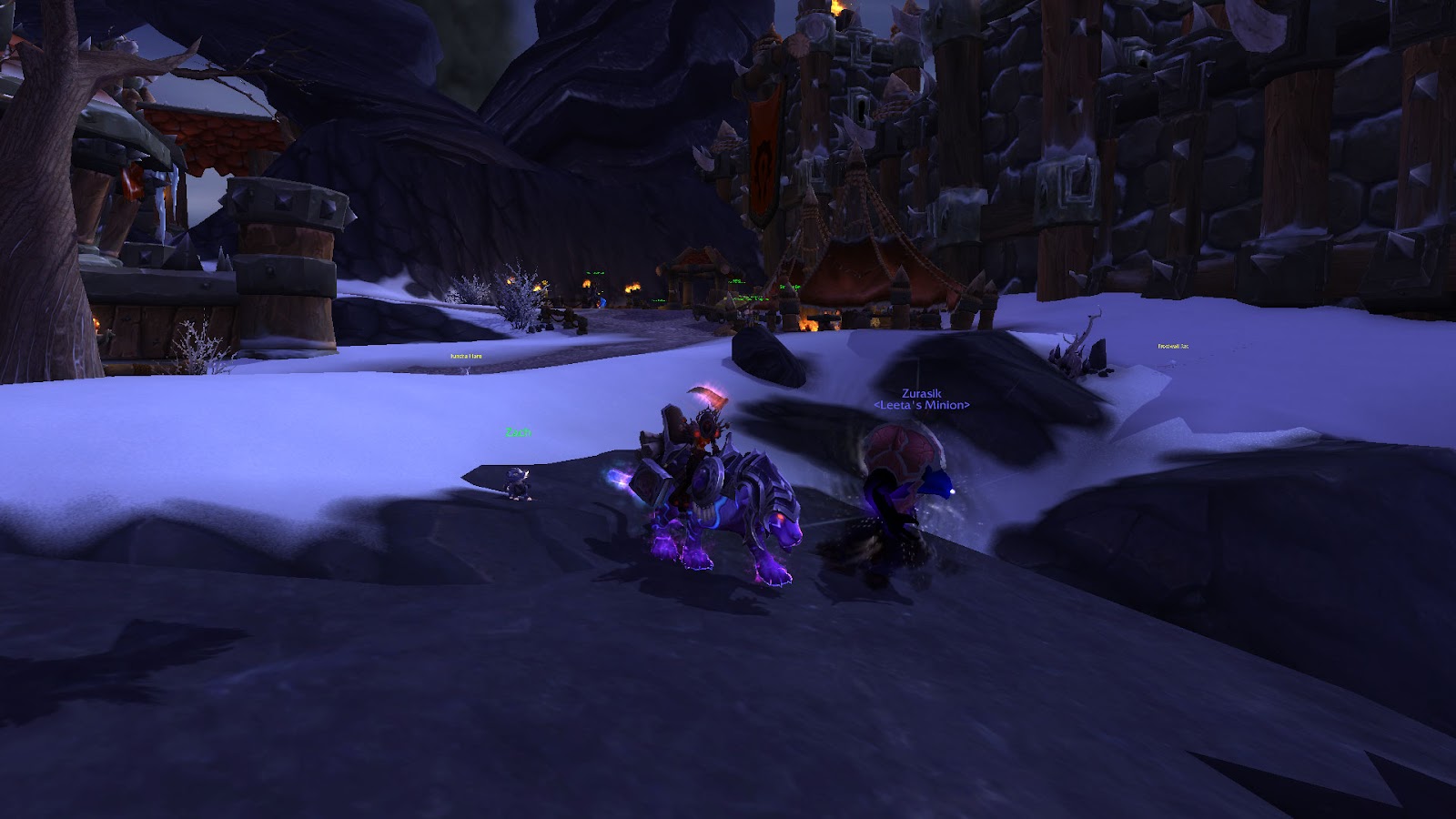 Mount #247
And then I decided to sacrifice a little bit of gold and made myself the Sapphire Panther
http://www.wowhead.com/item=83090/sapphire-panther 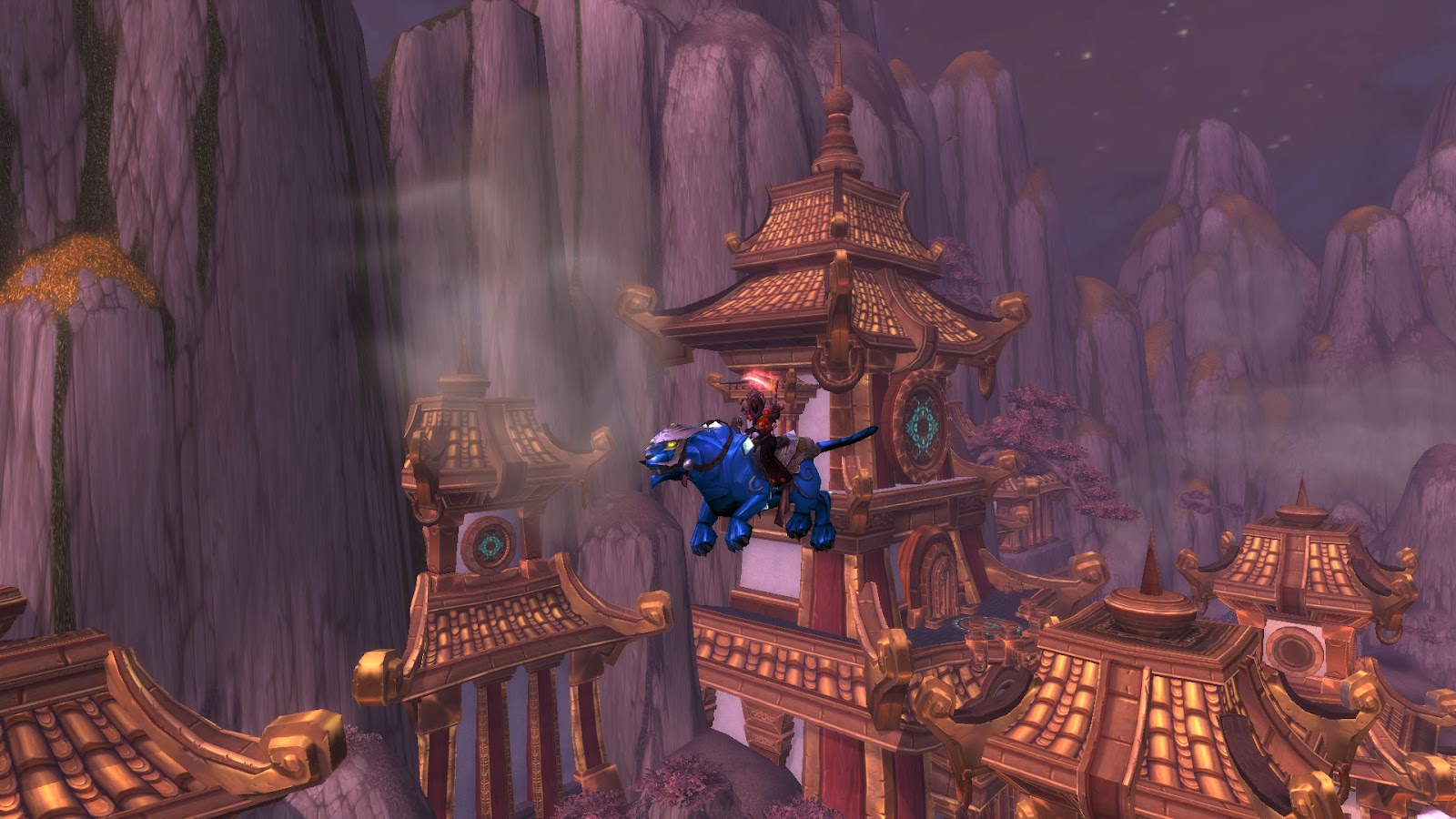 Tents
Hi Ladies.
The collection of tents, crates and a non responsive portal on a hillside by Stormwind is the end boss from the Draenor 5 man dungeon Everbloom, where you go through a portal to the camp and fight a genesaur and his killer daisy friends.
You cannot hop down to the city from in the dungeon version of the camp, gotta port out.
Alisaunder


Hi Ladies hope you are all doing well :D. seeing as you all missed out last week enjoy this weeks one (hope I've made it in time for this week), as you will hear I have been playing with audacity a bit more the last few days. The music I have used is the NightSong track from the Cata album really like that track and can imagine tearing across The Barrens with the wind blowing through my mane whilst in cat form :D.


Hi everyone, Setnuh here. I have been having a great time in-game, when I actually find time to play that is. I haven't had much time to play. In part because how amazing the weather has been. Its nice getting the kids outside to play. When I do get time to play I spend all of it either playing Setnuh or gathering mats for his professions on my hunter. I haven't even been logging in to any other characters to even do garrison up-keep or daily pet quests. For the time being I will continue to try to get Setnuh to lvl100 so I can possibly make him my main. Hopefully I can get him there by the next time there is a CoD fun run. Keep doing what you do and have a great show.

Leeta - Mention CoD Fun Run next week after the show - 10pm server time - will be setting up a Guild Event in the Calendar so sign up if you are keen to come along :)