I have to take it slow this week as well because I am not allowed to sit for to many hours at the desk, but I have prepared an audio for the show and I'll be back online next week for streaming!


Murloc Egg Backpack for my niece 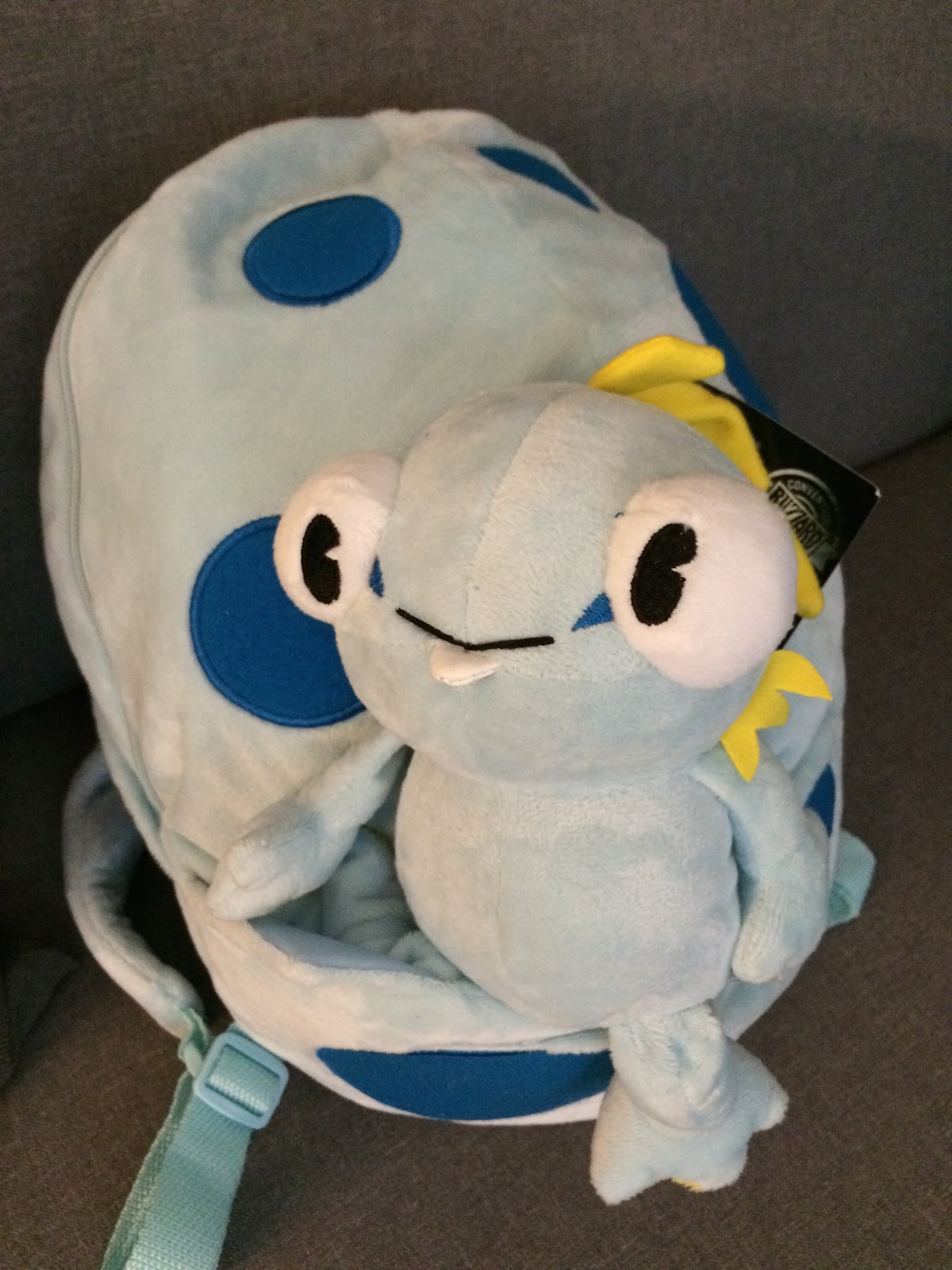 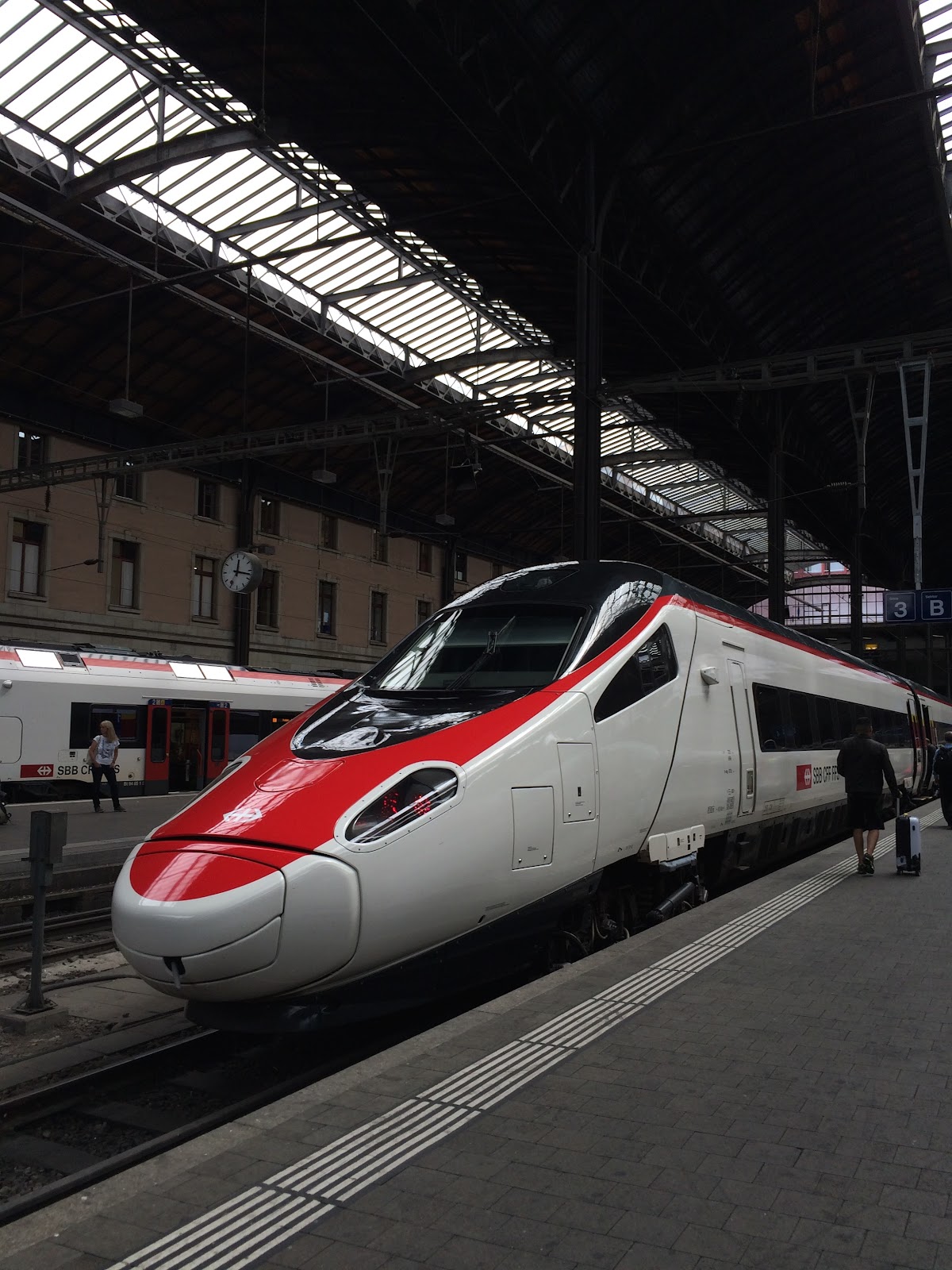 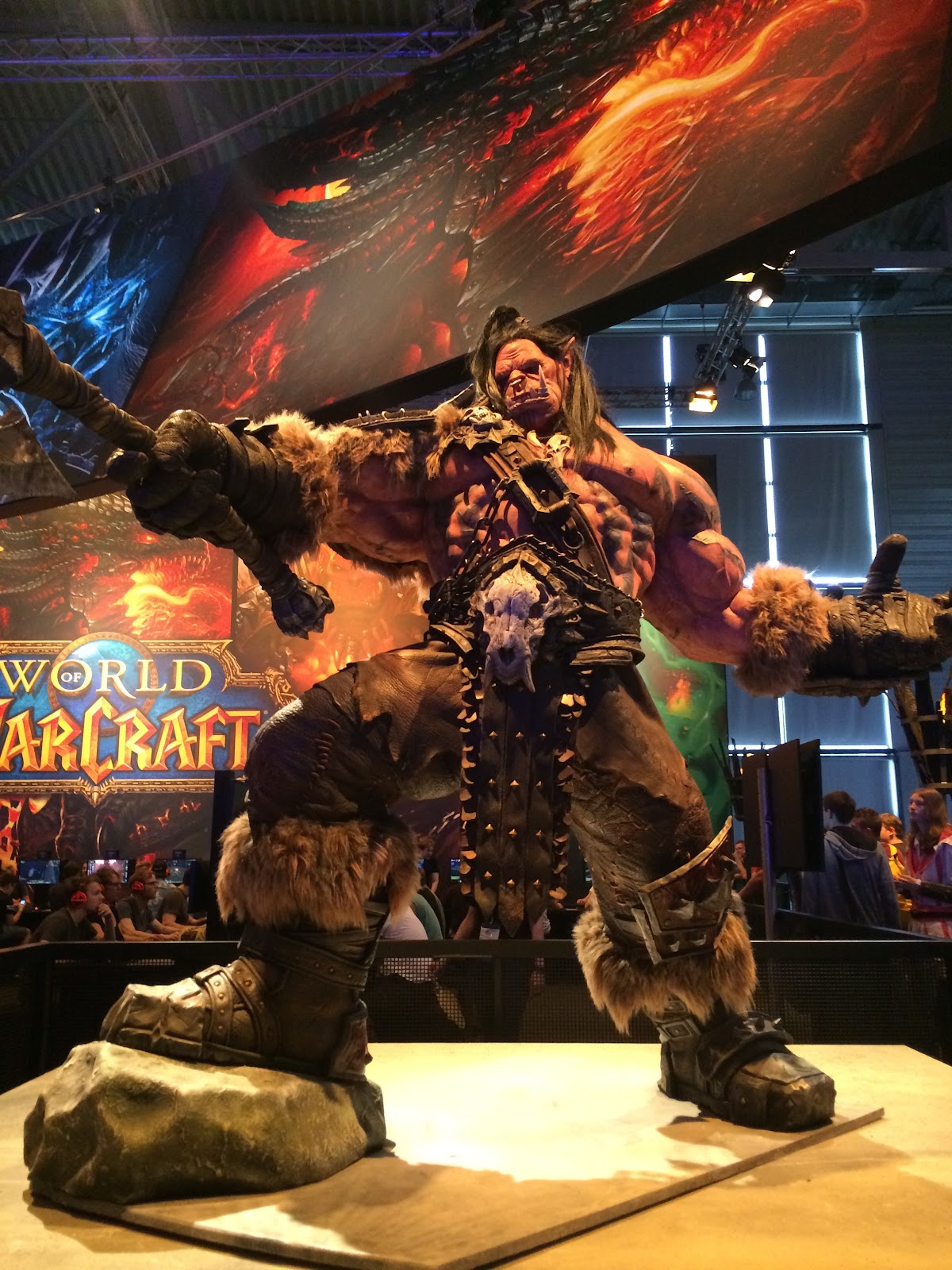 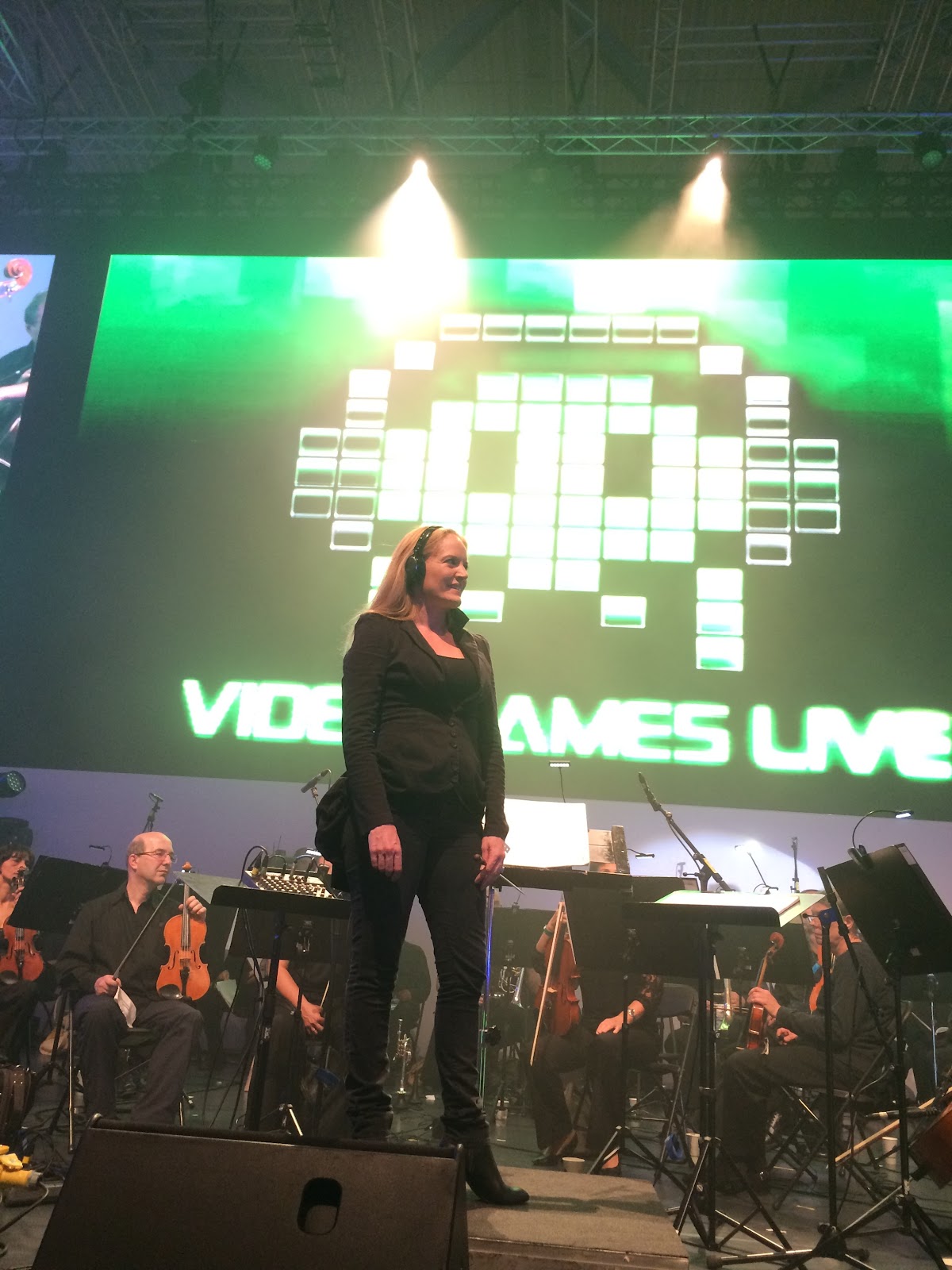 Hello Ctrl Alt Wow darlings!!! Aprillian, Rogueslayer, Marzana, Leeta & Vrishna! And hello Chat Room! First off...I hope we found Marzana!! Hehe! Also, I am so sorry...I got home super late last night & had to come to work today so didn't have any time to record! I know, poor planning on my part, but then again...after last week's submission, you might need a break from my voice anyway! Hehehe 😉 I agree with Wil Zambrano on Twitter, by the way...it's totally time for a musical episode!!!!! *giggling* (I know Rogueslayer is ready for it!) And speaking of twitter, I wanted to give a shout out to CAW listener, Caitrin! She's a super nice person & a big fan of the show...😃 OK....Aprillian & Vrishna....Vegas CAW in January?!?! Huh?? Huh??? Are we gonna have a meetup one of the days with our CAW peeps, maybe?? 😀😀😀
I can't wait to hear more!! Oh shoot, but right now I really have to get back to work before I get in trouble...hehehe!

1/ Iron Leitah - Alliance Warlock - Lvl16 - Lvl17
Left Westfall and headed over to Redridge to see what quests were there.
Then did the long run from Ironforge to Dun Morogh as had no flight paths opened! 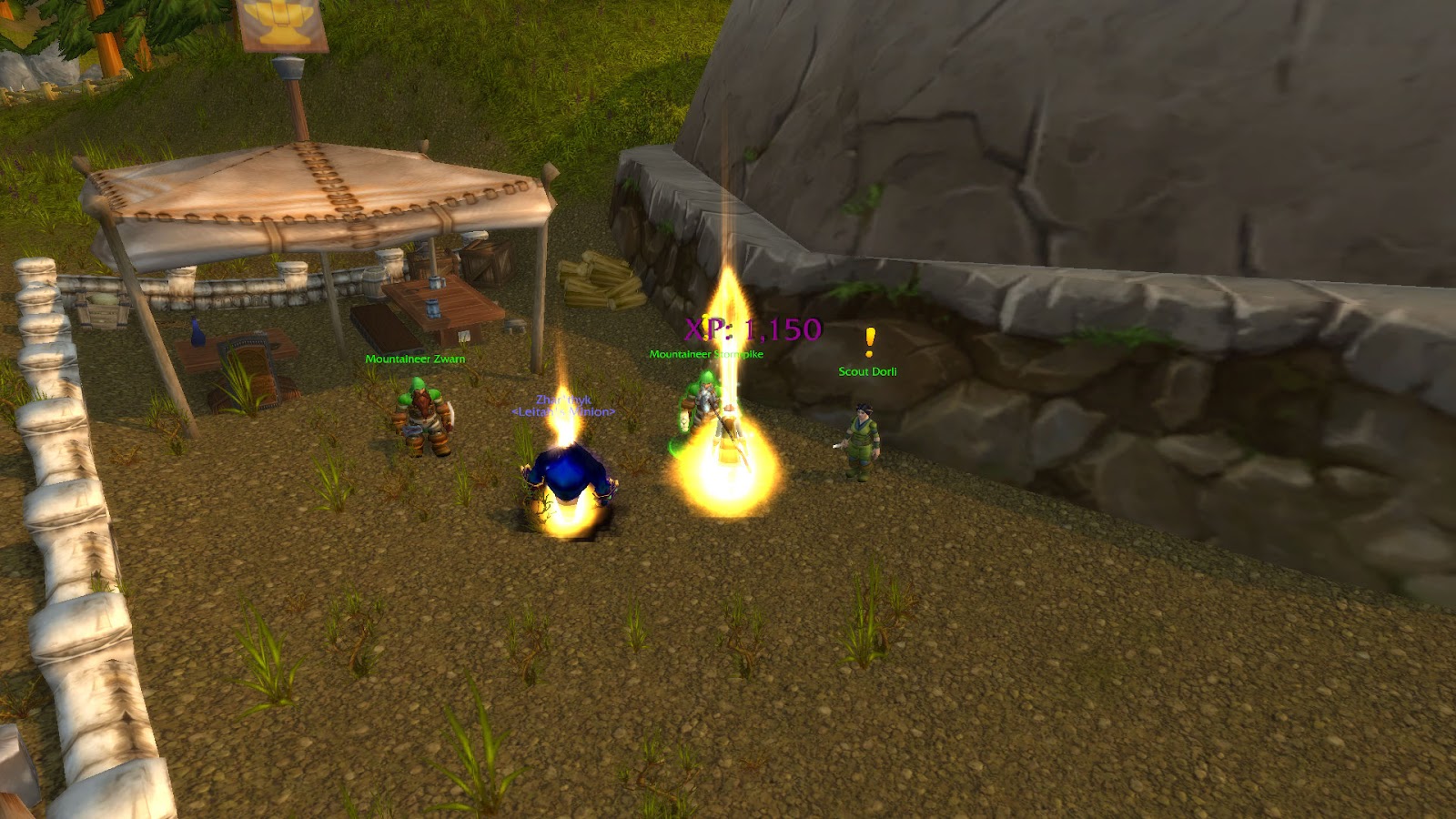 
2/ Bloodleeta - Alliance Druid - Lvl15 - Lvl16
Still over in Darkshore grinding through anything but stags!
Mostly naga and water elementals. 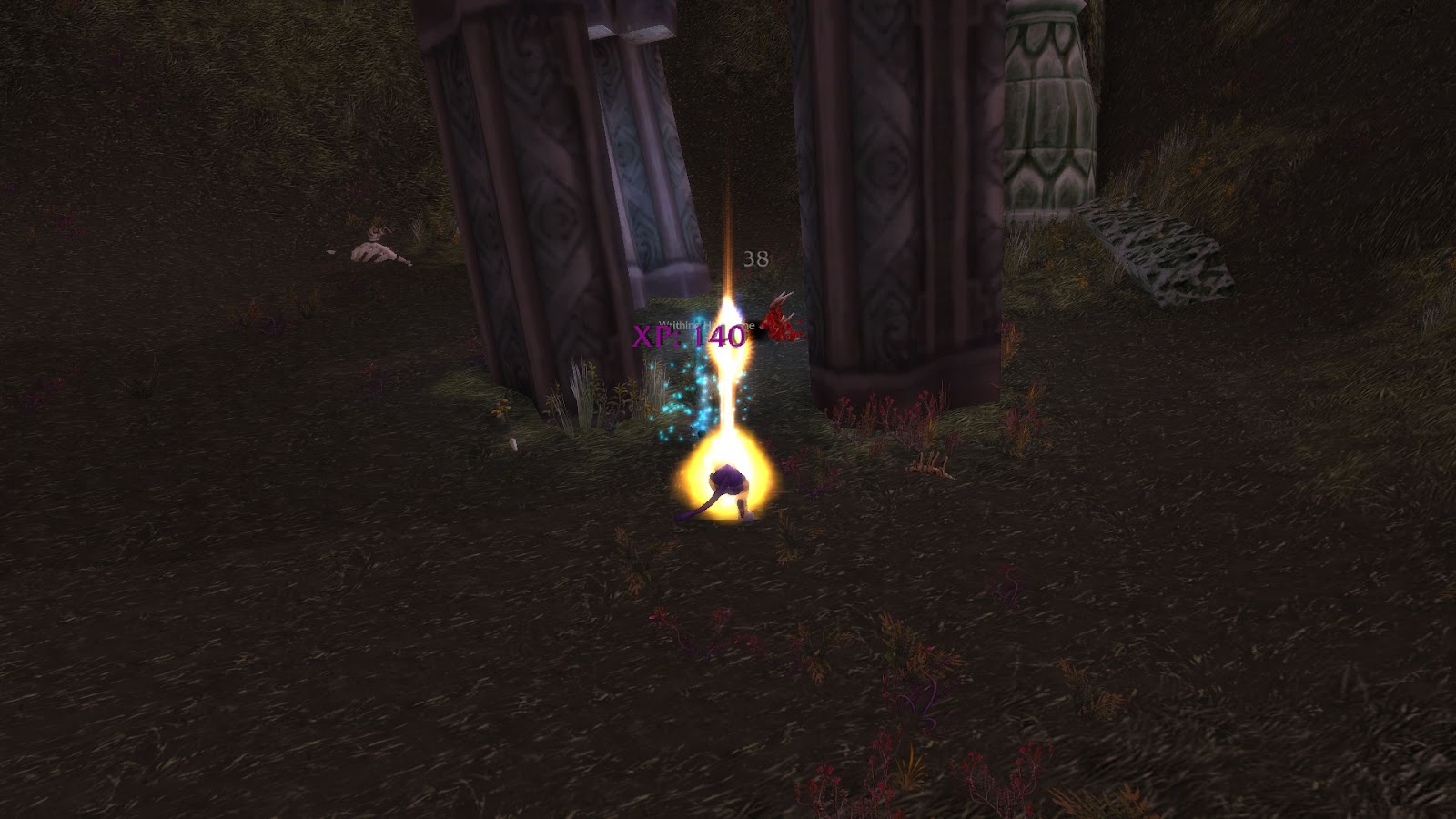 
Spent most of my time questing in Hillsbrad!
Lots of quests to keep myself occupied however did not do Yeti one… was worried that might be a ‘kill me’ type quest! 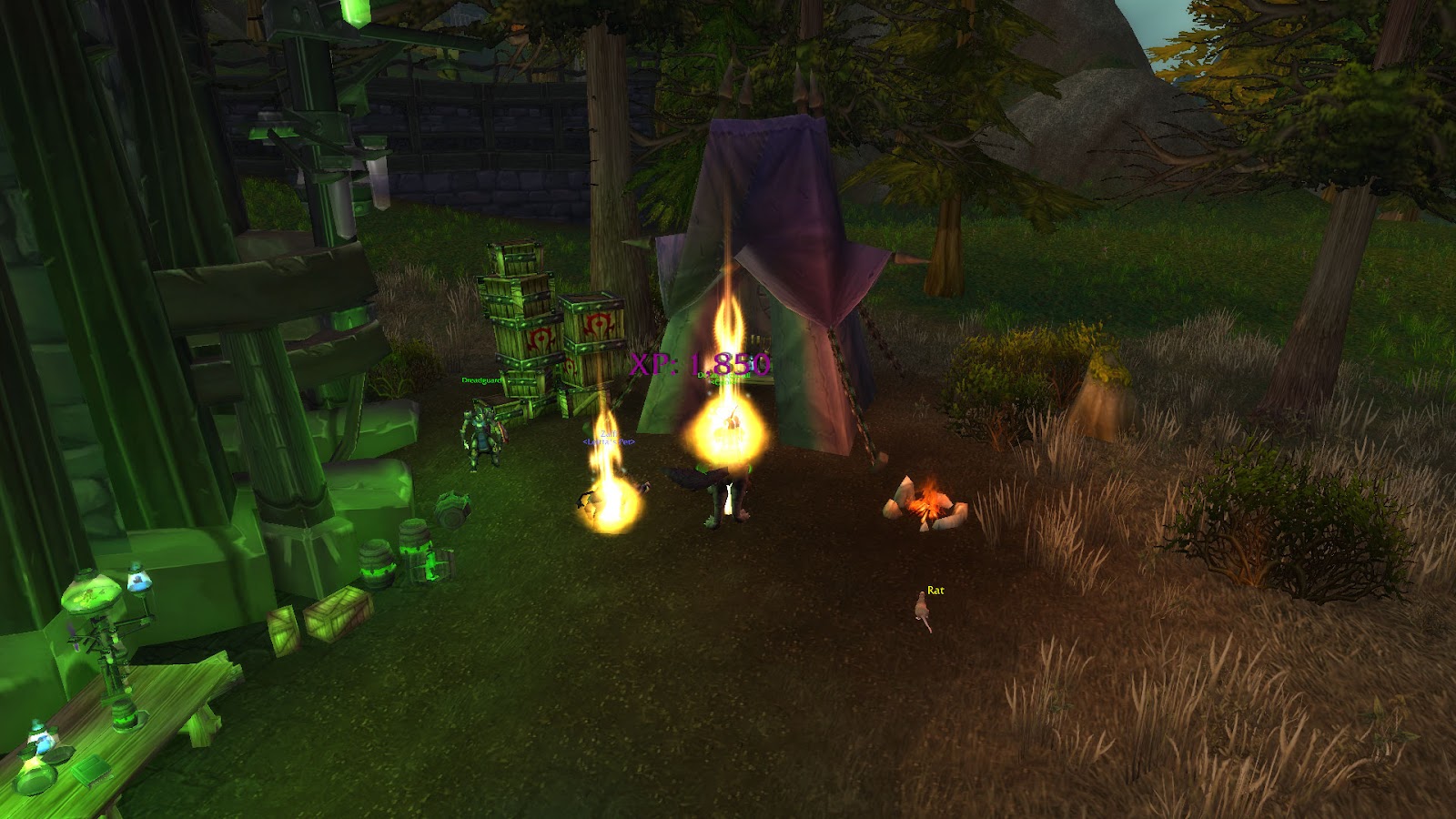 
Grinding Report
2 hours - not once did Monstrous Spineclaw spawn!
1 hour - again not no spawn of MS!
2 hours and 40 mins - no show of MS!
Then went back later before shutdown - spent nearly an hour… with 1min 30s to shutdown guess who showed up!! I was logging out on the beach when NPC Scan went off!! 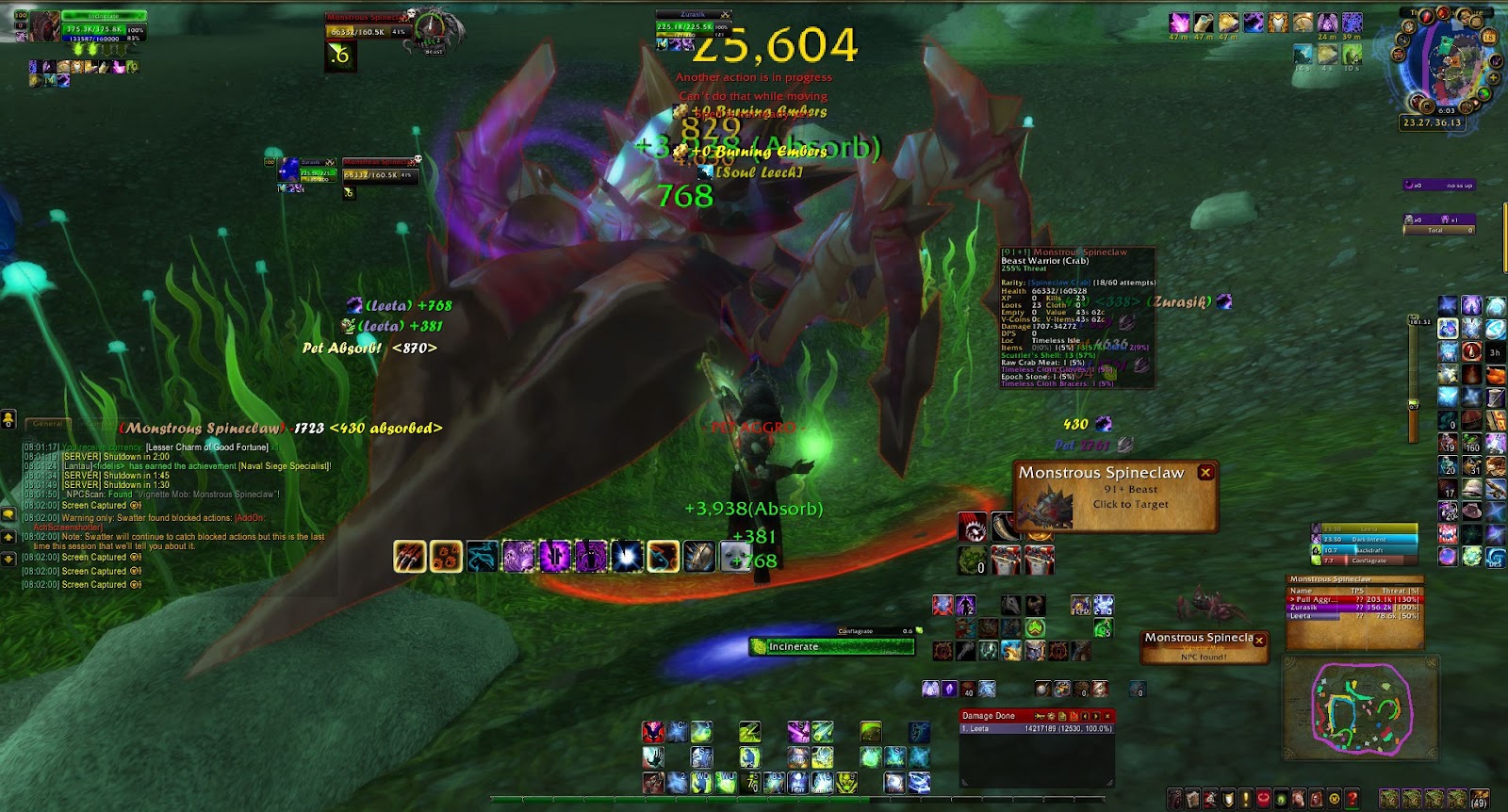 GIVE ME MY PET YOU BUGGER!!!


However last night Osu was kind… 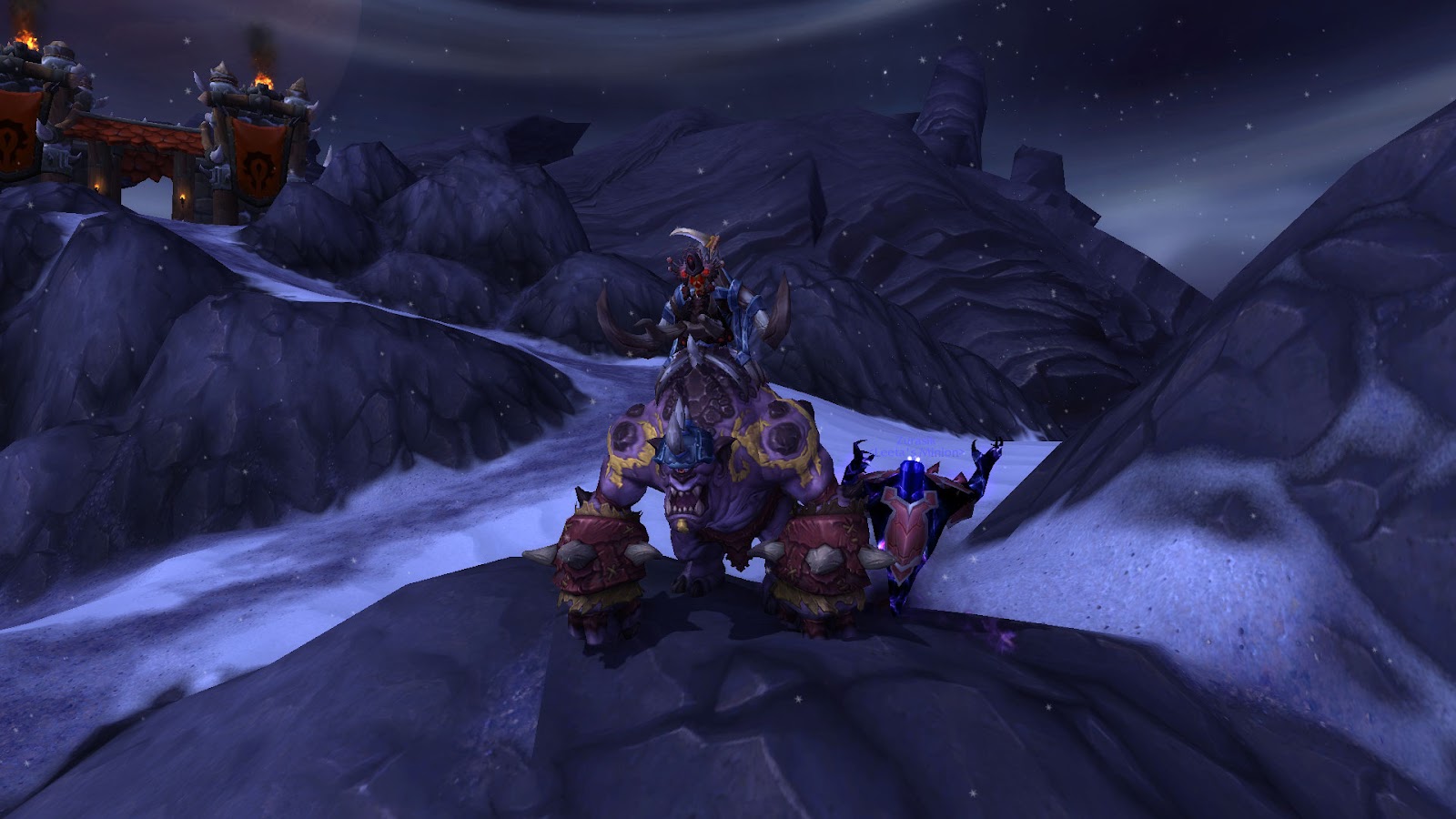 
Did the emote - target Savage Cub then /sit
He walked over and jumped in my lap :) 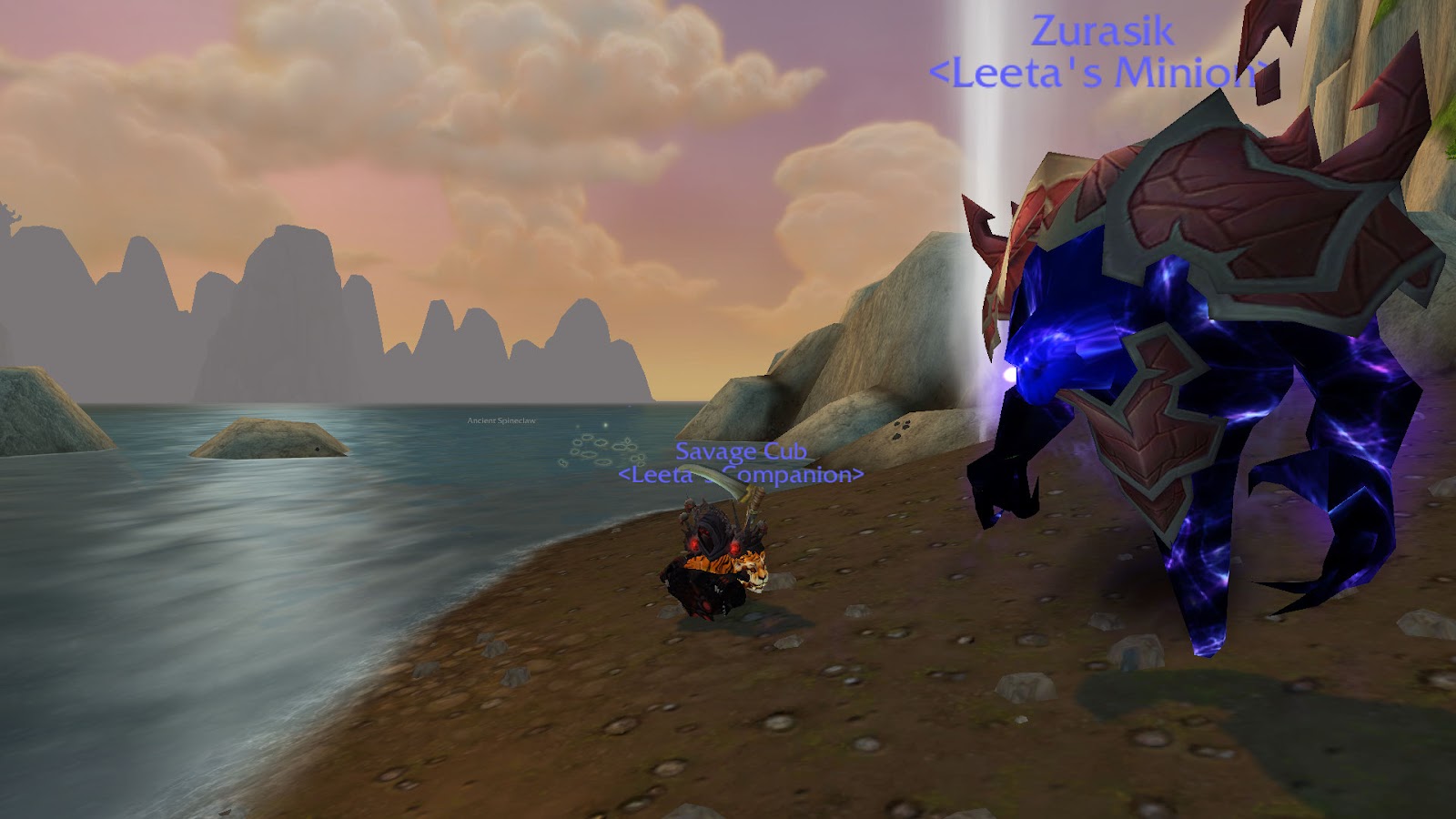 
Created a starter account for challenge toons, will upgrade when one reaches 20


Okay, so we didn’t really make way for warriors this week. But it was fun anyway! 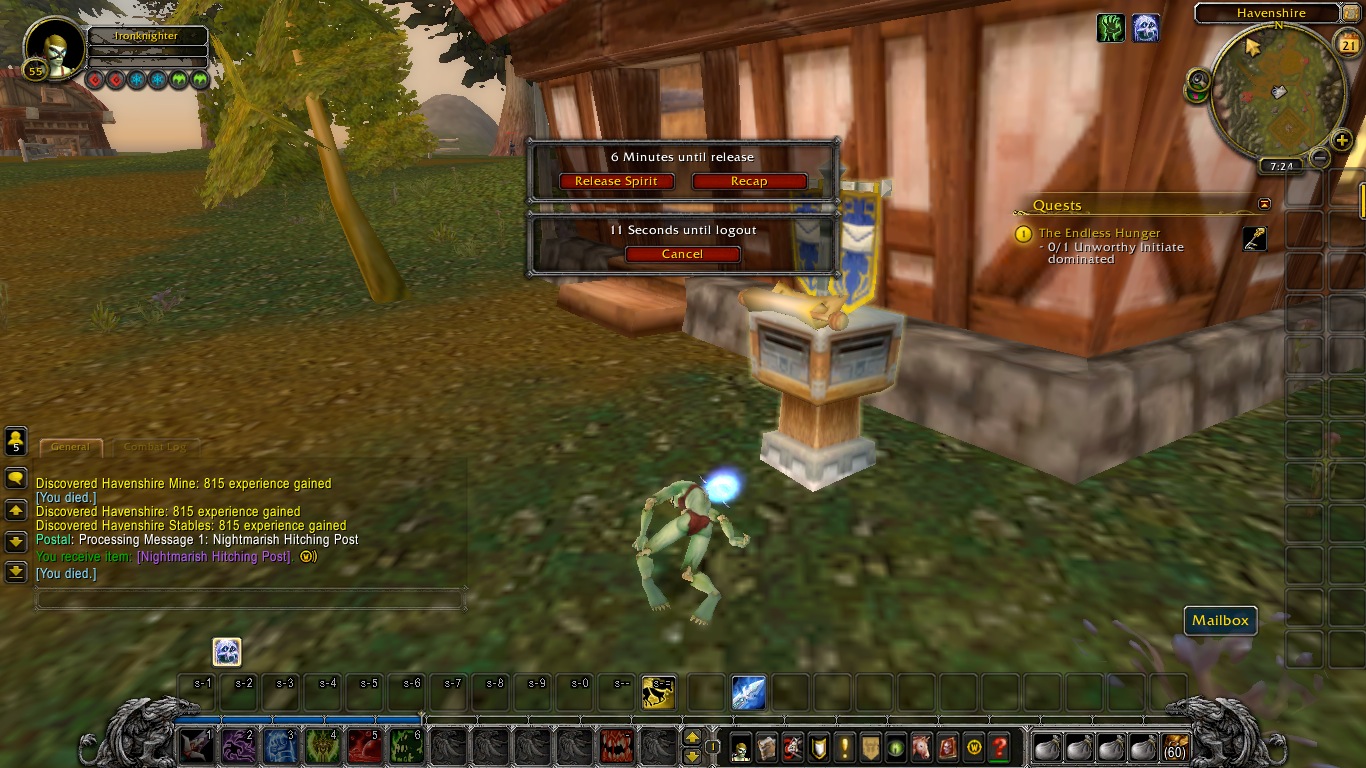 
Wow graphics
From Alisaunder
I've always enjoyed the Blizzard art style but lately, since Draenor caused me to spend so much time in the old world, I've started to notice the old textures and lower polygon counts.
How do you feel about the older art?
Do you not play that much in older content so don't care, or care enough that Blizzard should sacrifice newer content to go back and redo older pieces?
And would it bother you to see a 2015 building planted beside a grove of 2004 trees and squirrels?


Kristen's audio
Hi CaW crew!
Here’s my audio!
Lots of hugs,
Kristen
P.S. Sorry for the baby crying in the background. I forgot to turn off the tv and a baby was crying on it.


Attached is my audio for this week. It's been a busy one with at least one close call with my ironmans and a new alt I started yesterday. Below is pictures of my two level 15 Ironmen Wondavyre (Wonda-vere) and Shalavyre (Shall-a-vere) as well as my new mage alt Rilyannon (Ril-annon).


For the Horde,
For the Alliance,
For many alts! 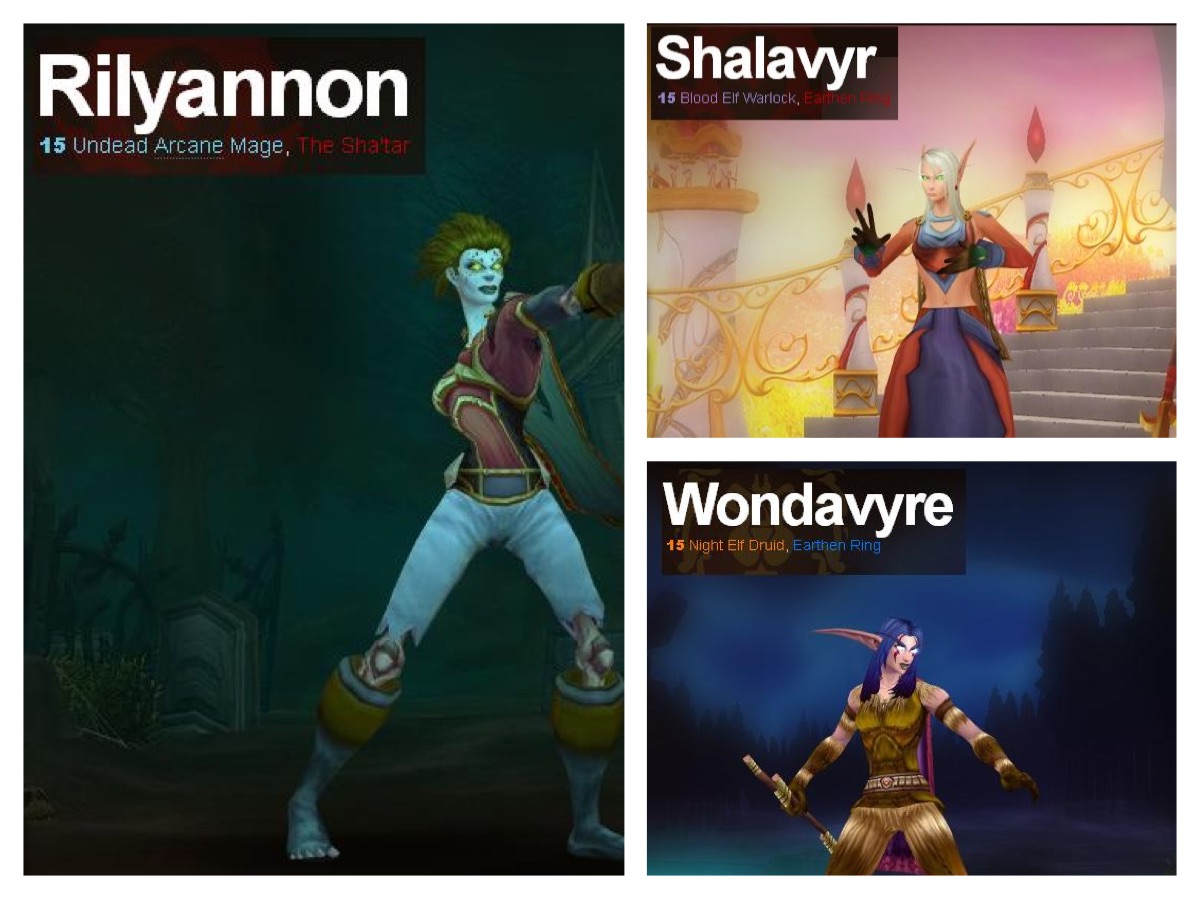 Call me Big G breaker of podcasts
Sorry no audio this week as I had TAFE and work and everything else really cut my game time down. Plus I sent a audio to girls gone WoW last week and it broke there podcast so I decided not to temp fate and didn't do a audio. Shout out to virishna who was awesome on leeta's show.


And for havering some game time next week
BigG


Oh look they got Wrath in my Burning Crusade
Heya folks! Been a couple months, so I figured it was time for one of my increasingly sporadic email updates.


So what have I been up to? Well like most of you I spent tons of time in Tanaan Jungle prepping for flight, and while i was really excited at first, it quickly became Timeless Isle 2.0. I'm so tired of the place that I can't even force myself to send any alts there. I'm at the point where I just go there and kill the big four elites and maybe Kazzak to hopefully get one of the mounts to drop. I honestly expected to be flying around Draenor by now. We'll see if Blizz's "matter of weeks, not months" promise comes true.


You would think my being a bit unhappy with the current content of WoW would be limiting my play time but it hasn't. In fact it's allowed me to focus on the aspects of the game that I really like even more. I've finished up Glory of the Dragon Soul Raider in my many attempts farming for the Blazing Drake. I'm also on the last stage of the quest to obtain Dragonwrath. It's been fun coming up with creative ways to solo quests that are meant to be completed as a group and I can't wait to finally be able to purchase a Lil' Tarecgosa of my own. Running old raids and dungeons for achievements has quickly become my favorite thing to do in game. In fact my Alliance guild has set aside Thursday nights just for running old school stuff and we are now working on the Pandaria raids. It was during one of these nights that I had my first foray into the Terrace of Endless Spring to kill the Sha of Fear and finally earn my Tranquil Master title.


OK it's been months... there's got to be more right? Oh yeah my personal grudge match with Leeta on the Warcraftpets.com realm leader boards still continues even though she probably didn't even know about it till now. I swear every time I nudge ahead of her she logs on and does like eleventy seventy pet battles and blows by me. I'm almost ashamed of the amount of gold I've spent in the AH on new pets but its nice to know I finally have all the TCG pets with my purchase of both the Dragon Kite and Tuskarr Kite a couple weeks ago. I also bought Hatespark the Tiny which is good news for the people who didn't get one from the 10th anniversary event because, with my luck, Blizz will mail one to everyone just for logging on next year. Oh well it's only gold right?


Now for a couple things I just learned that is probably common knowledge, but some others may have overlooked. You can send your followers to do a little archaeology by purchasing explorers notebooks. It's a good way to make the profession a little more tolerable until flying happens in Draenor. Also did you guys know that the Timewalking dungeons are considered max level heroics and thus can be used for the "Looking for... "achievements. I didn't until I got the Looking for Many achievement after kicking butt in the Black Morass last week. Mebbe the Perky Pug will finally be mine.


OK I'm going to go back to looking at the Legion announcement stuff for the 53rd time and buy my Virtual Ticket. So have a good show and I'll work on being more coherent in my next email.