1/ Iron Leitta - Orc Hunter - Lvl45-46
Quested Duskwallow Marsh near Mudsprocket then headed down to Thousand Needles.
Went to Tanaris for flight path then back to Desolace and ran through to Feralas grabbing all flight paths. 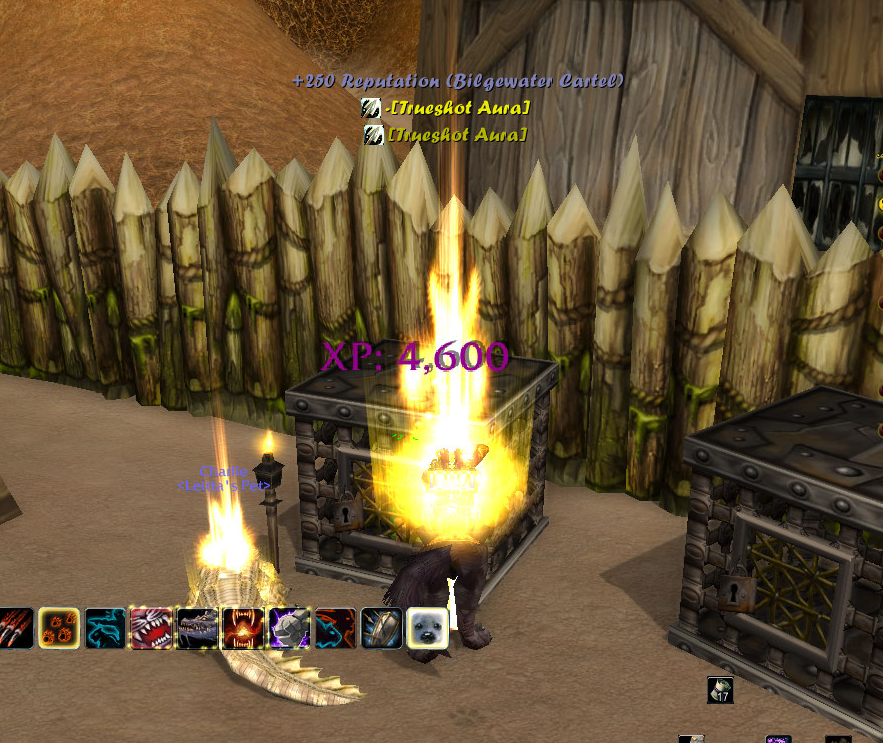 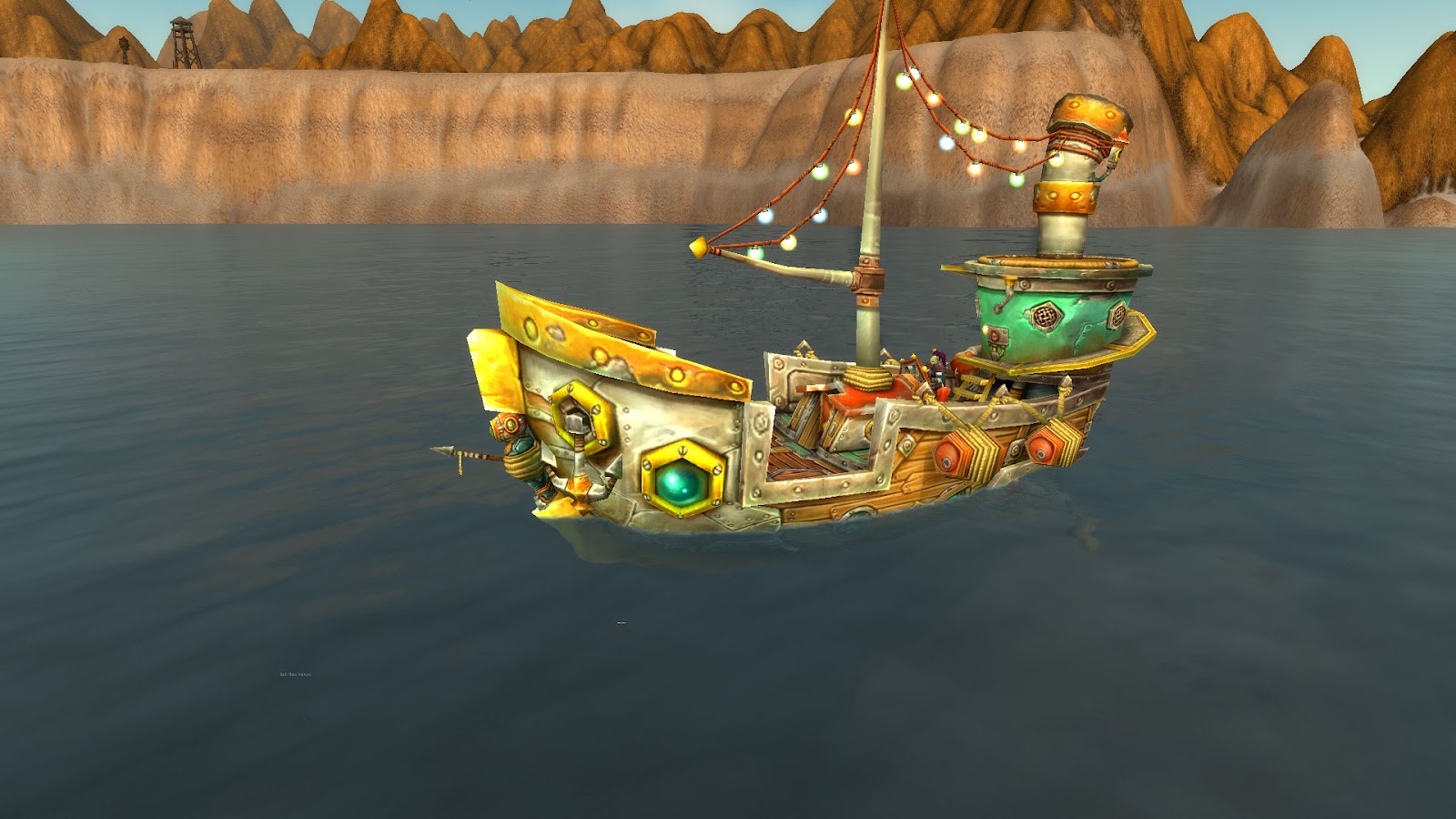 
2/ Warlocks - Lvl71
Went back into Karazhan - made it through to Shade. 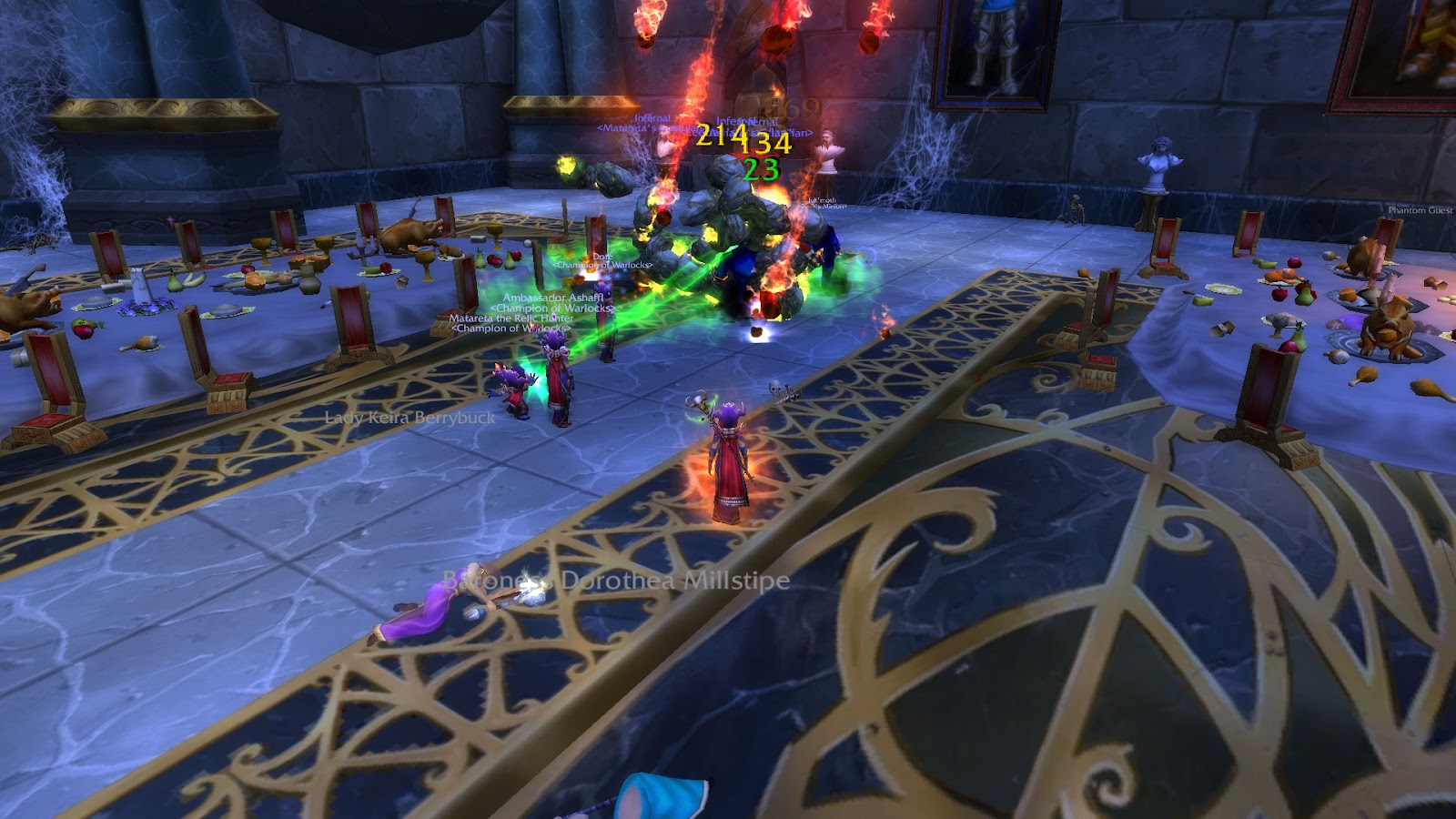 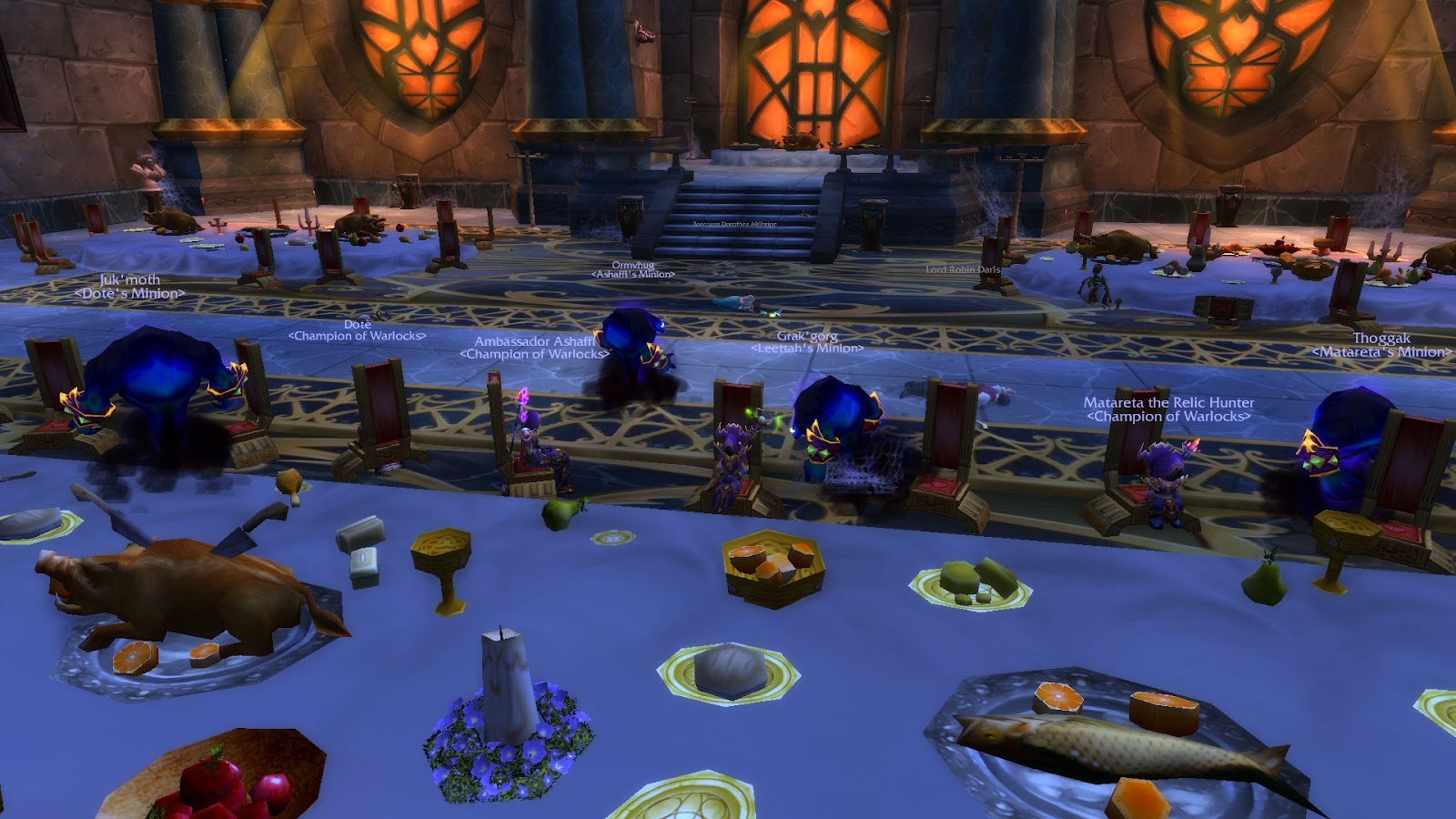 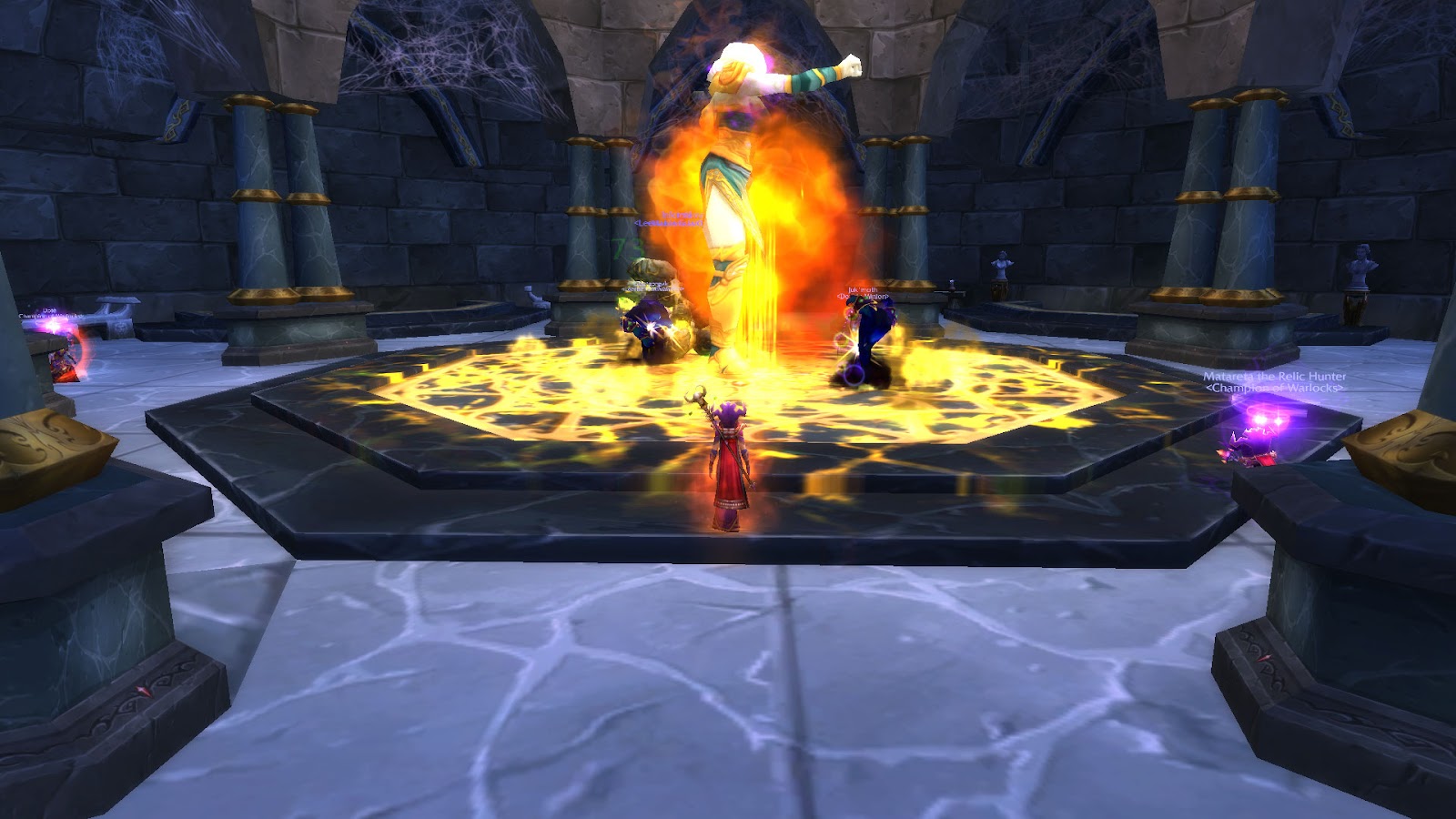 We Don’t Need No Stinking Pally!! 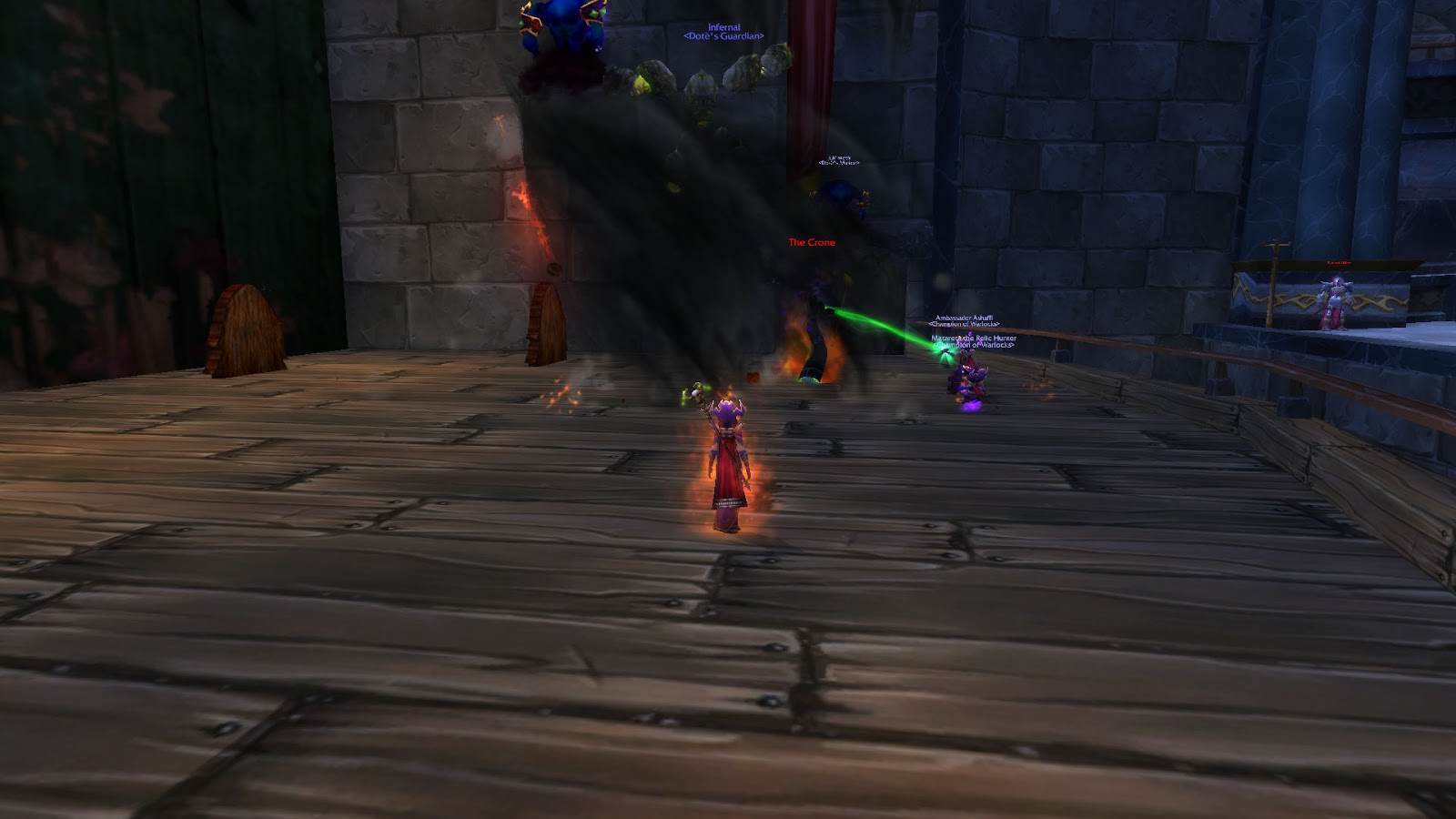 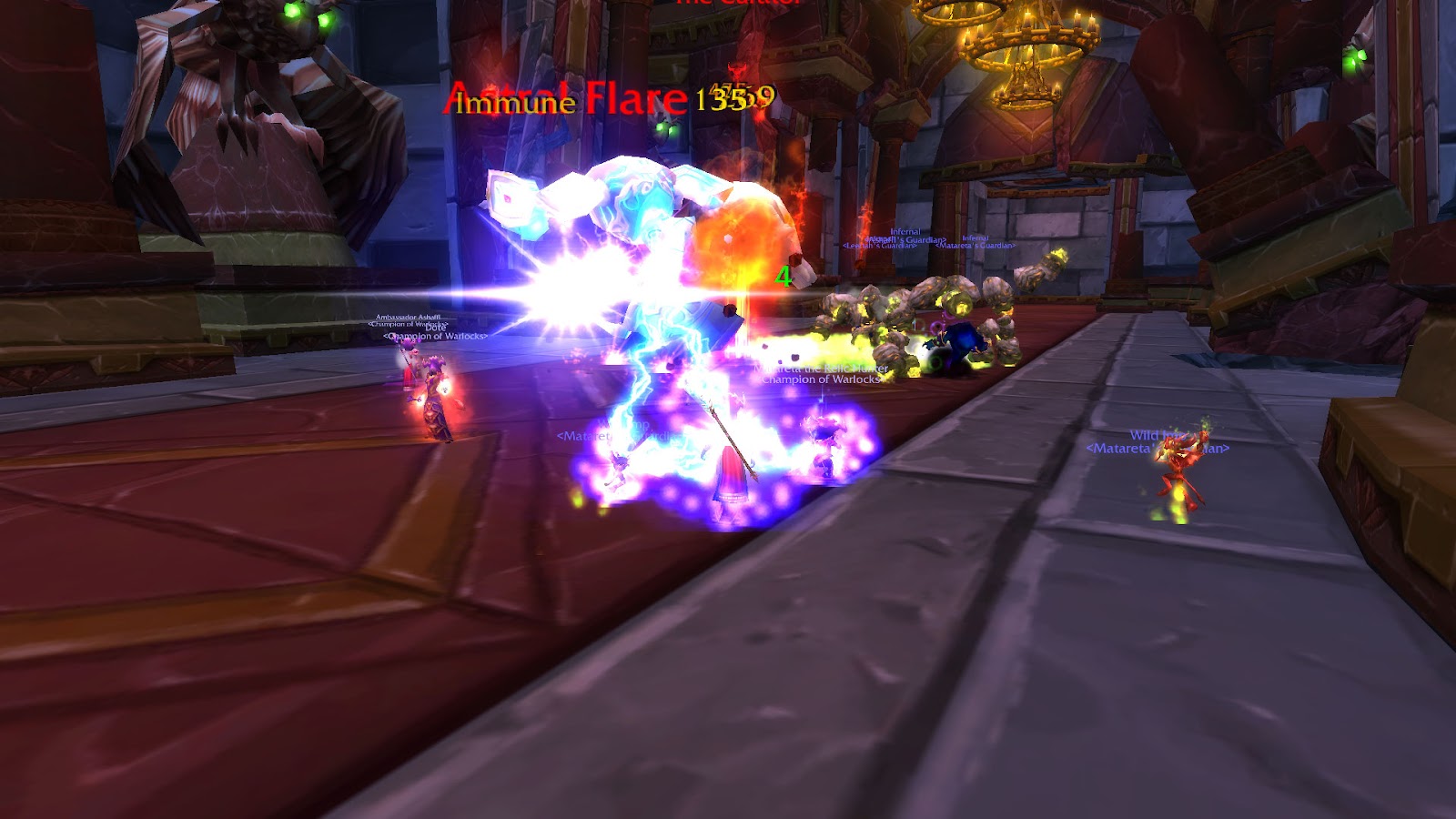 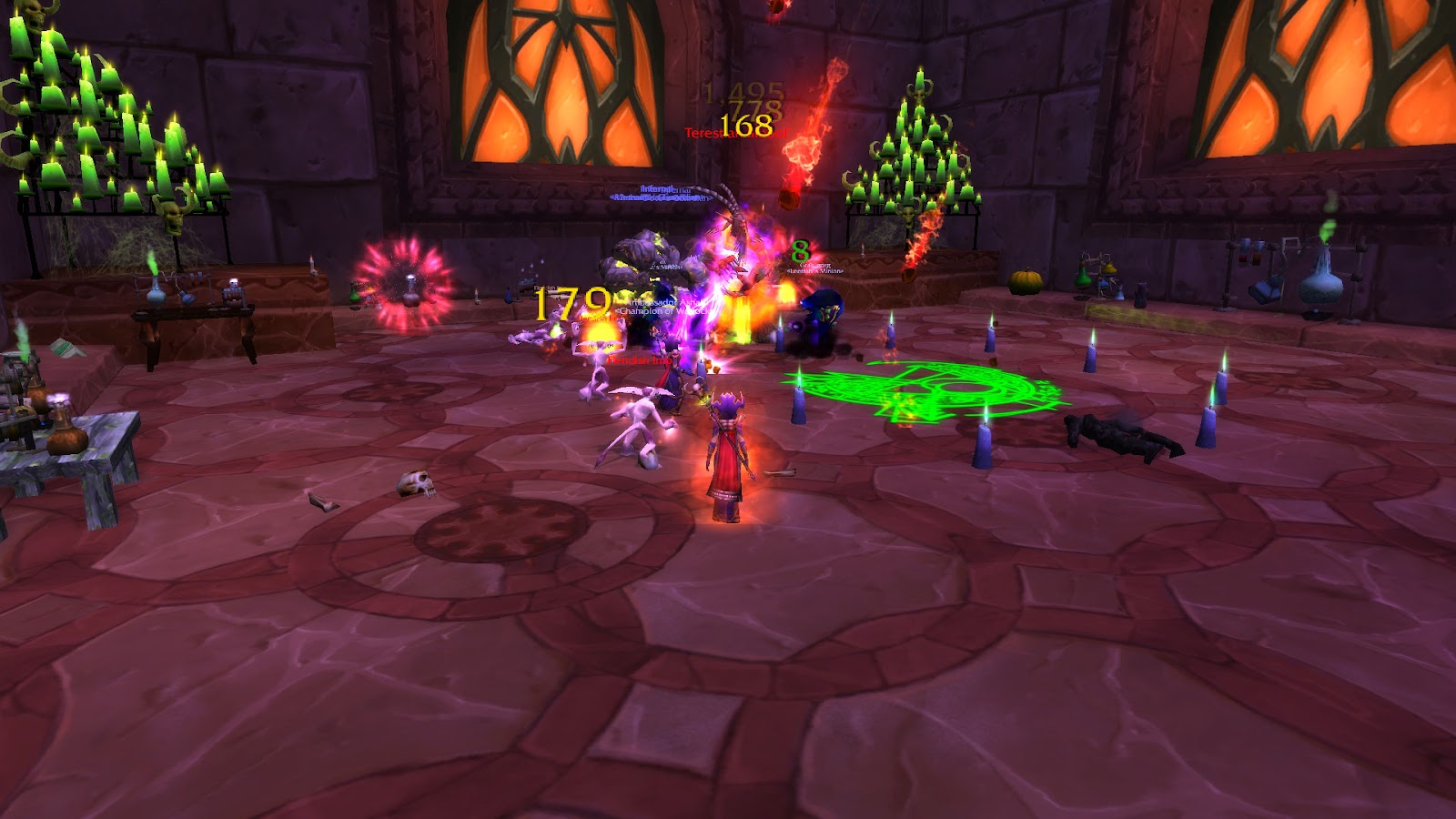 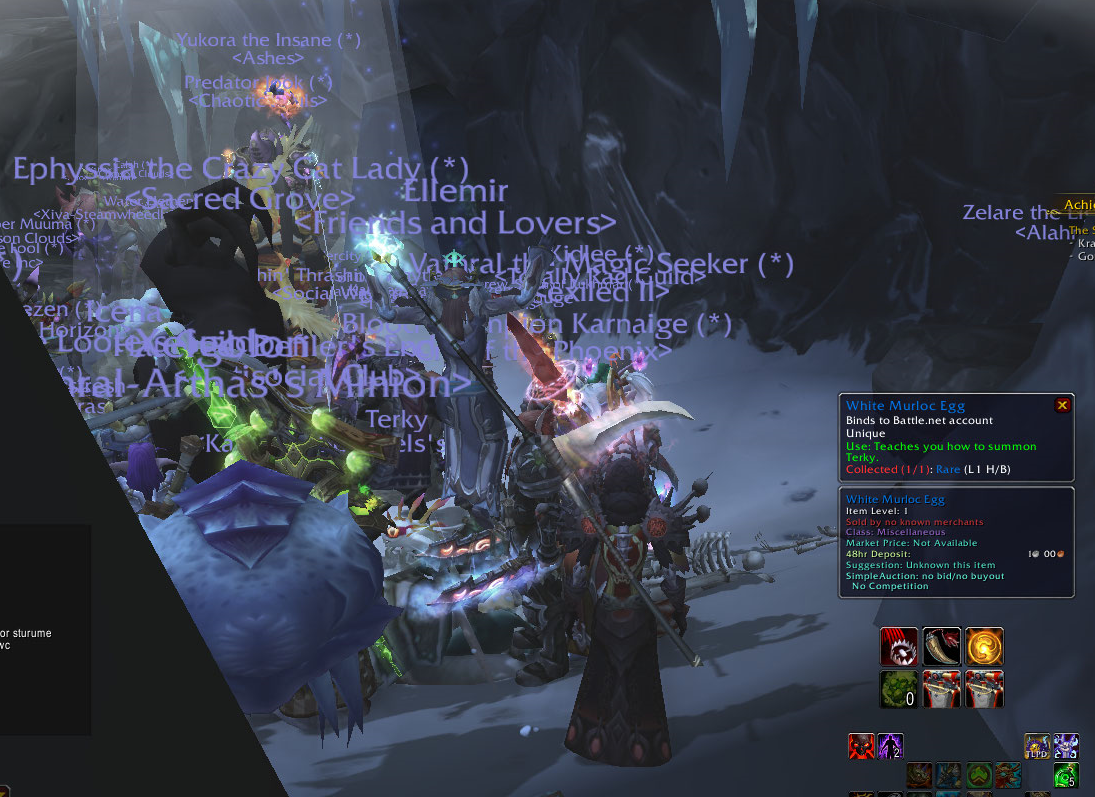 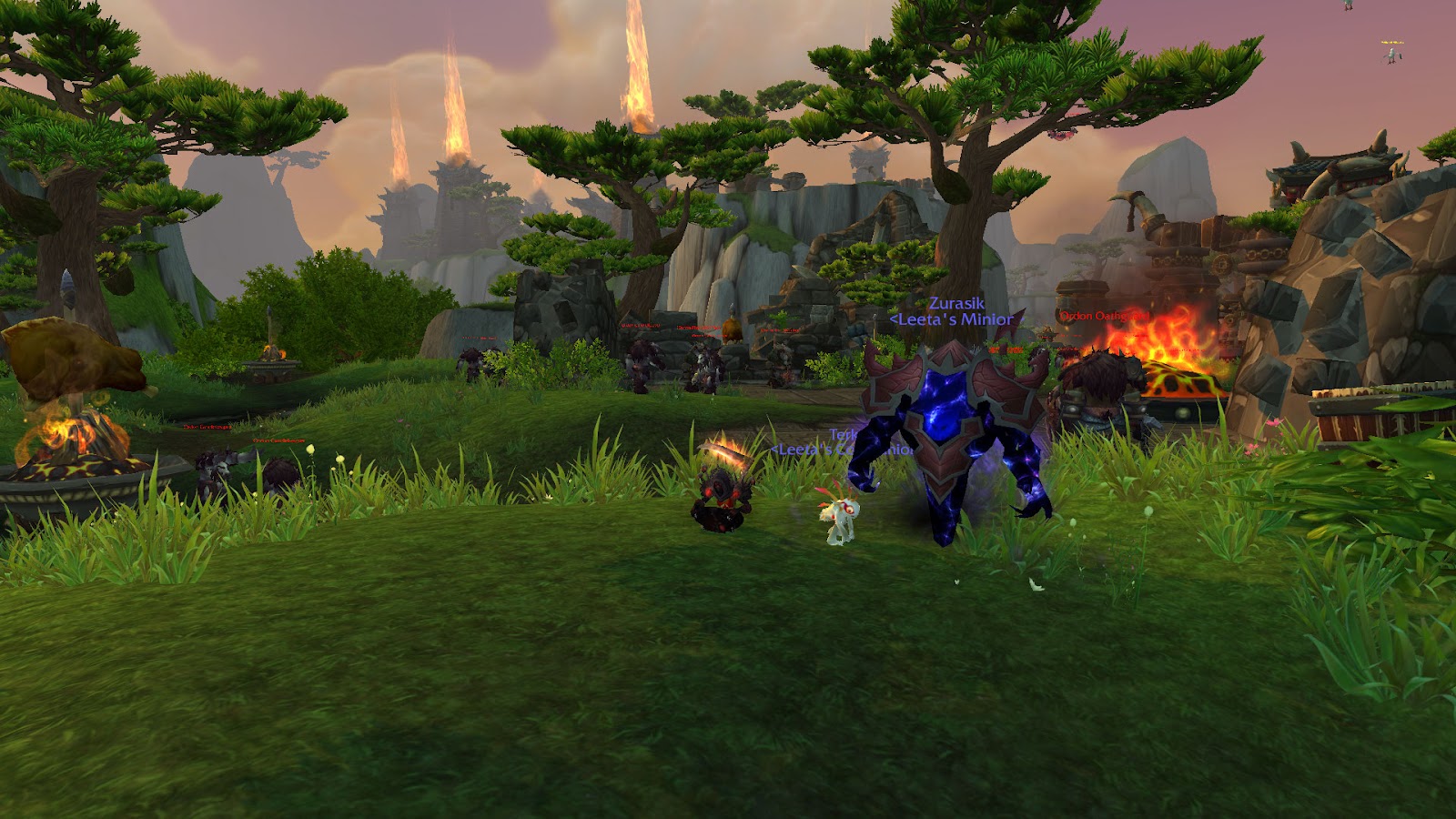 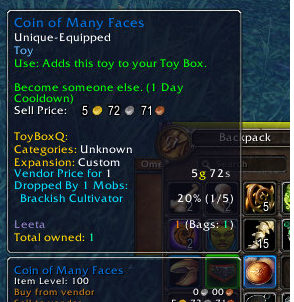 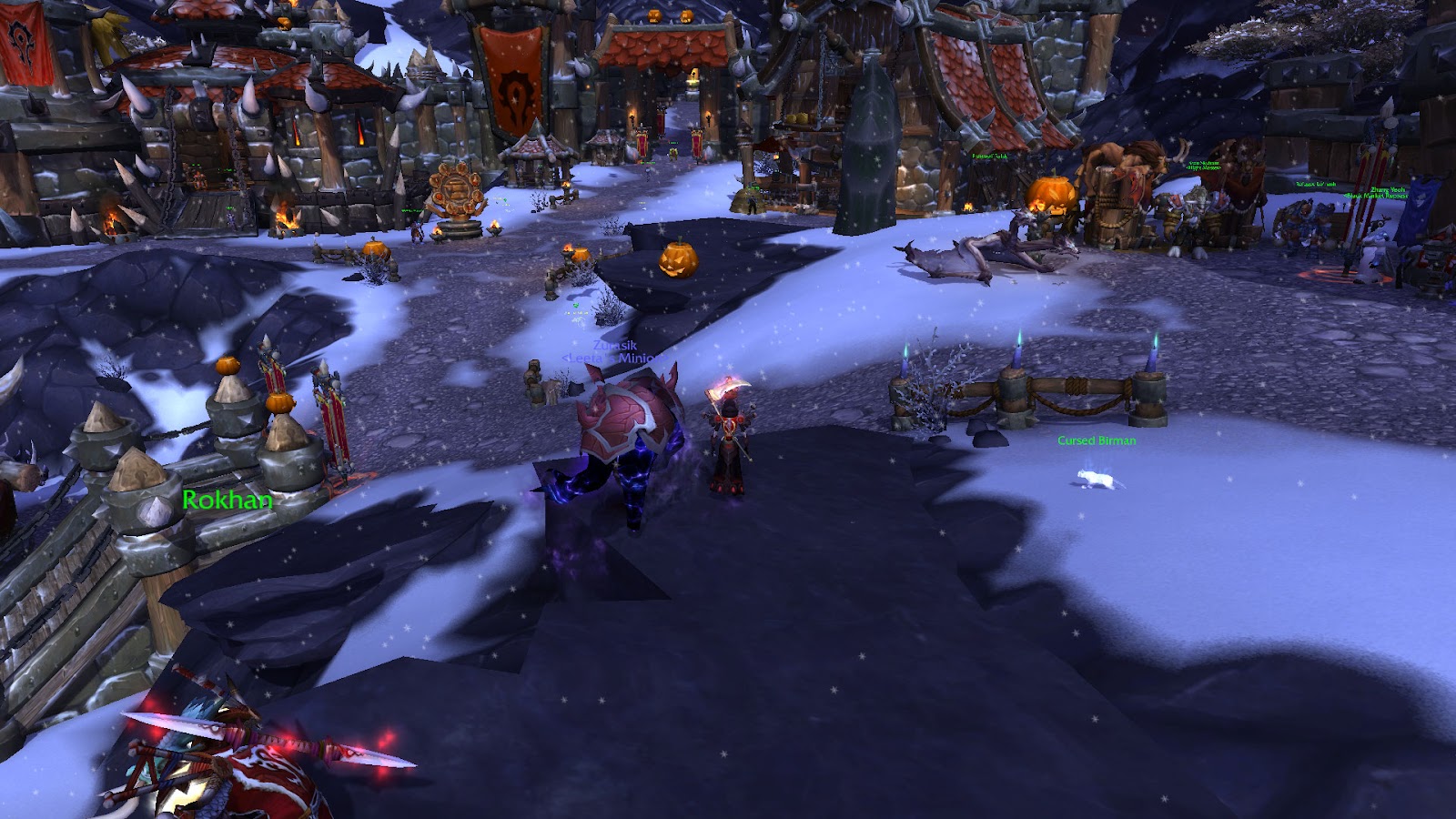 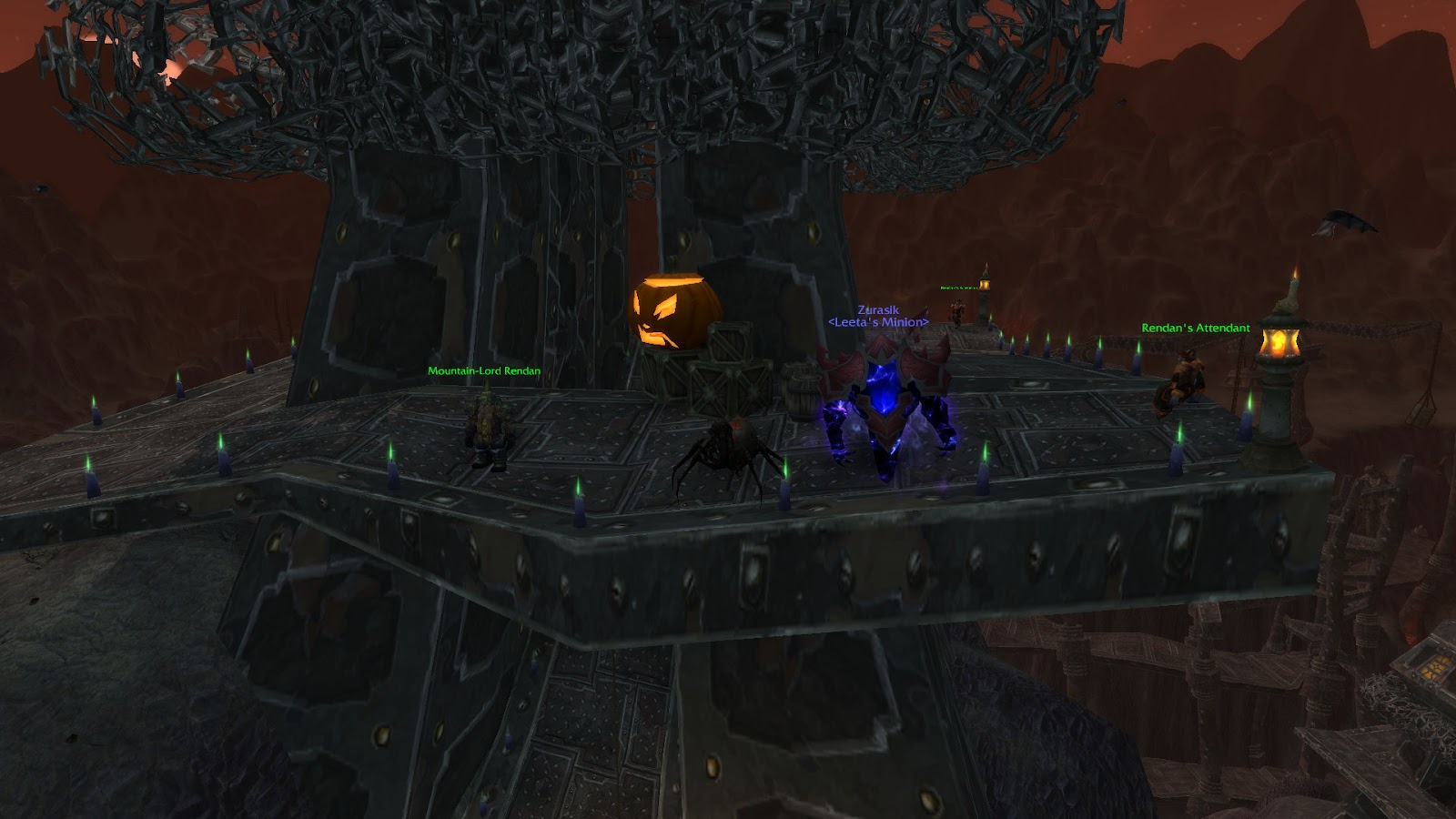 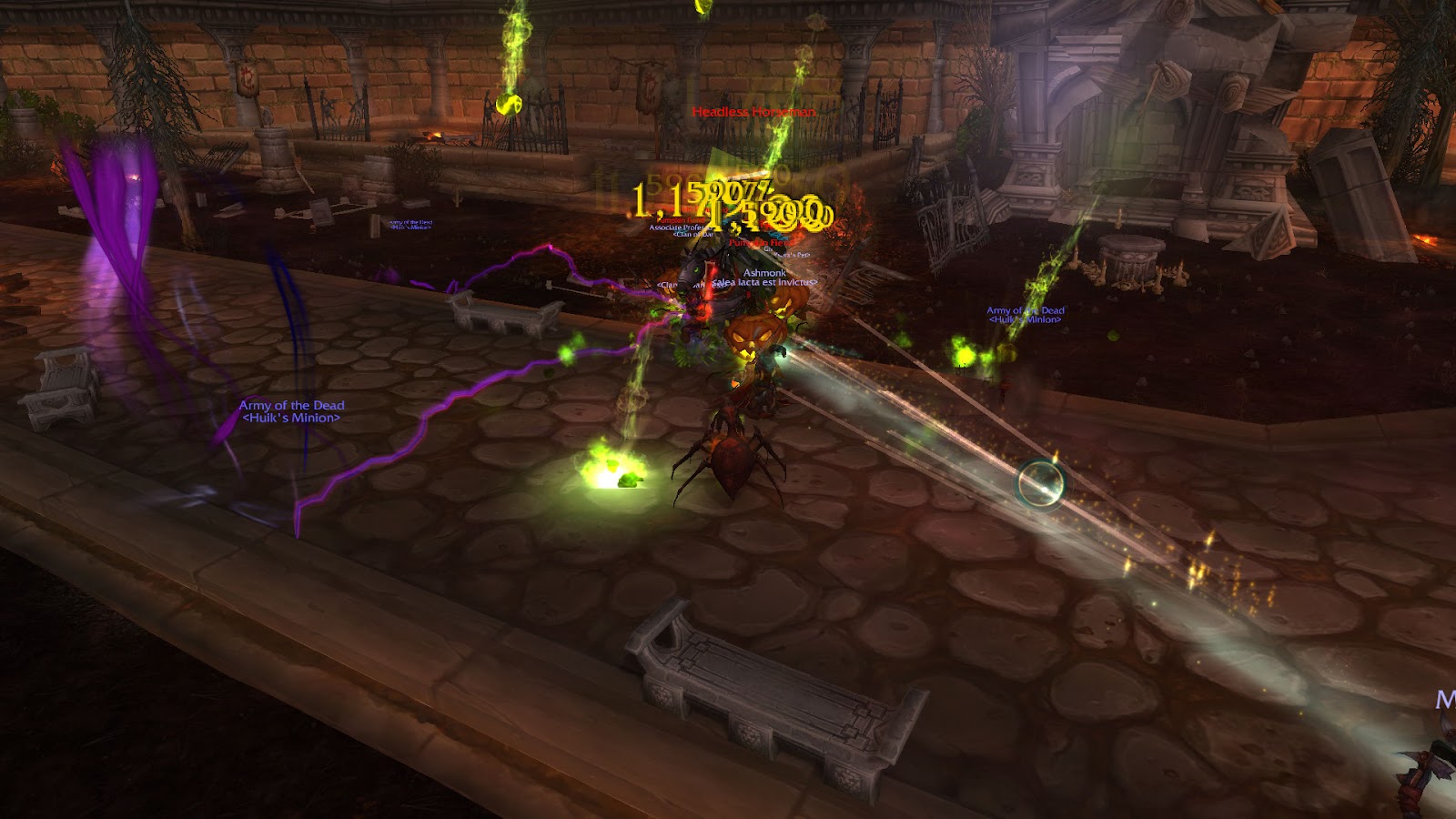 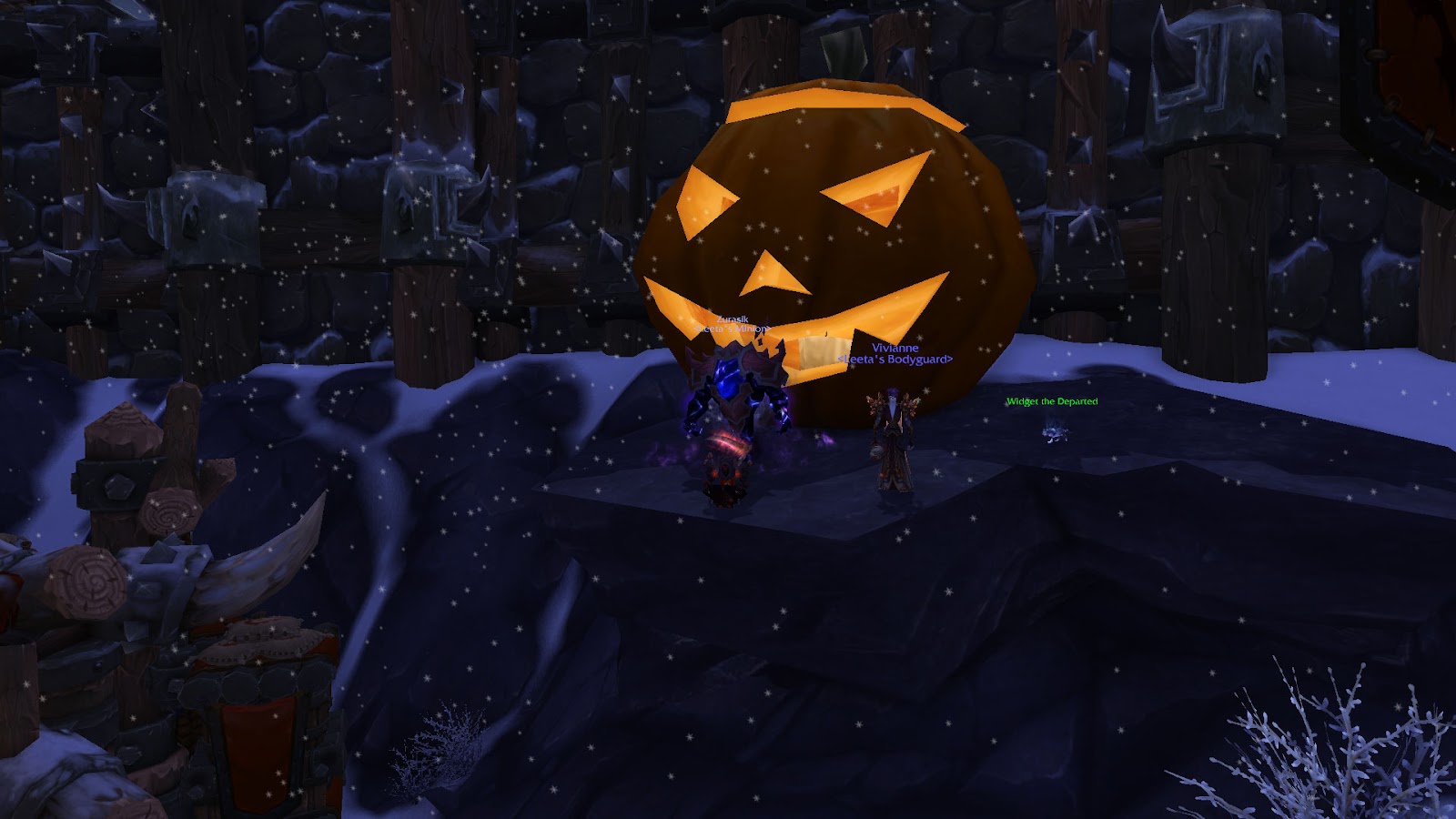 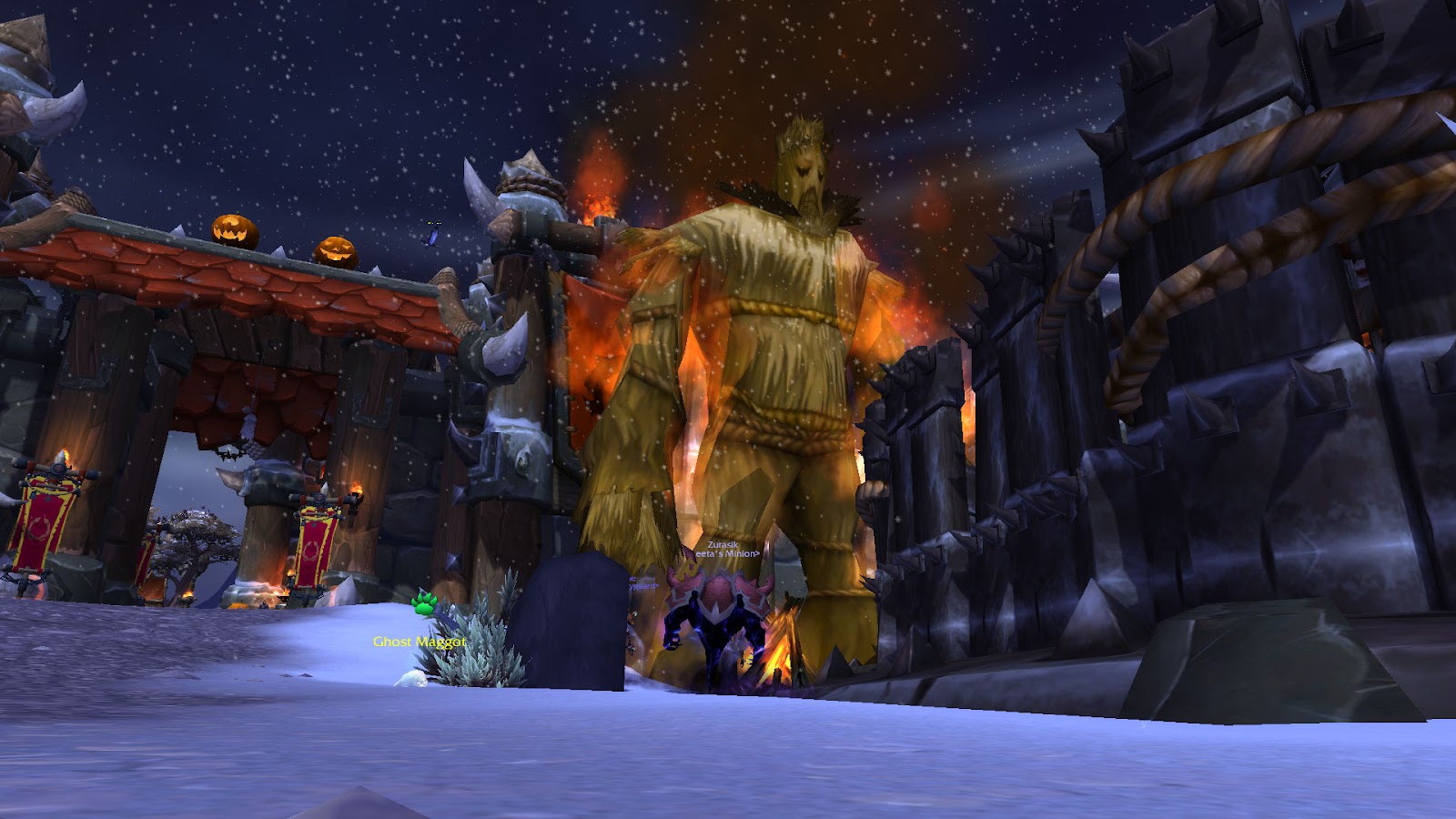 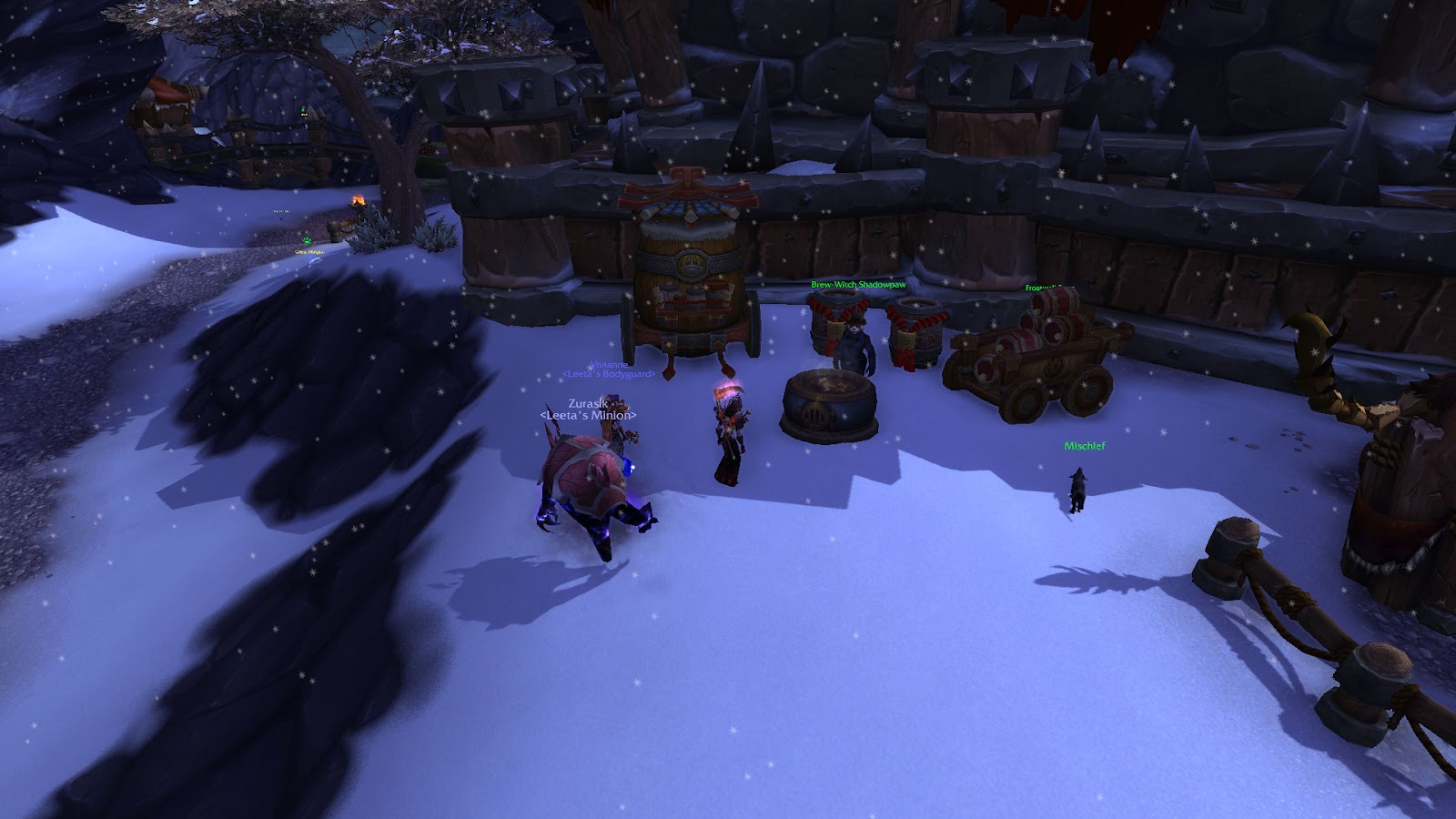 My Very Own Panda Witch! 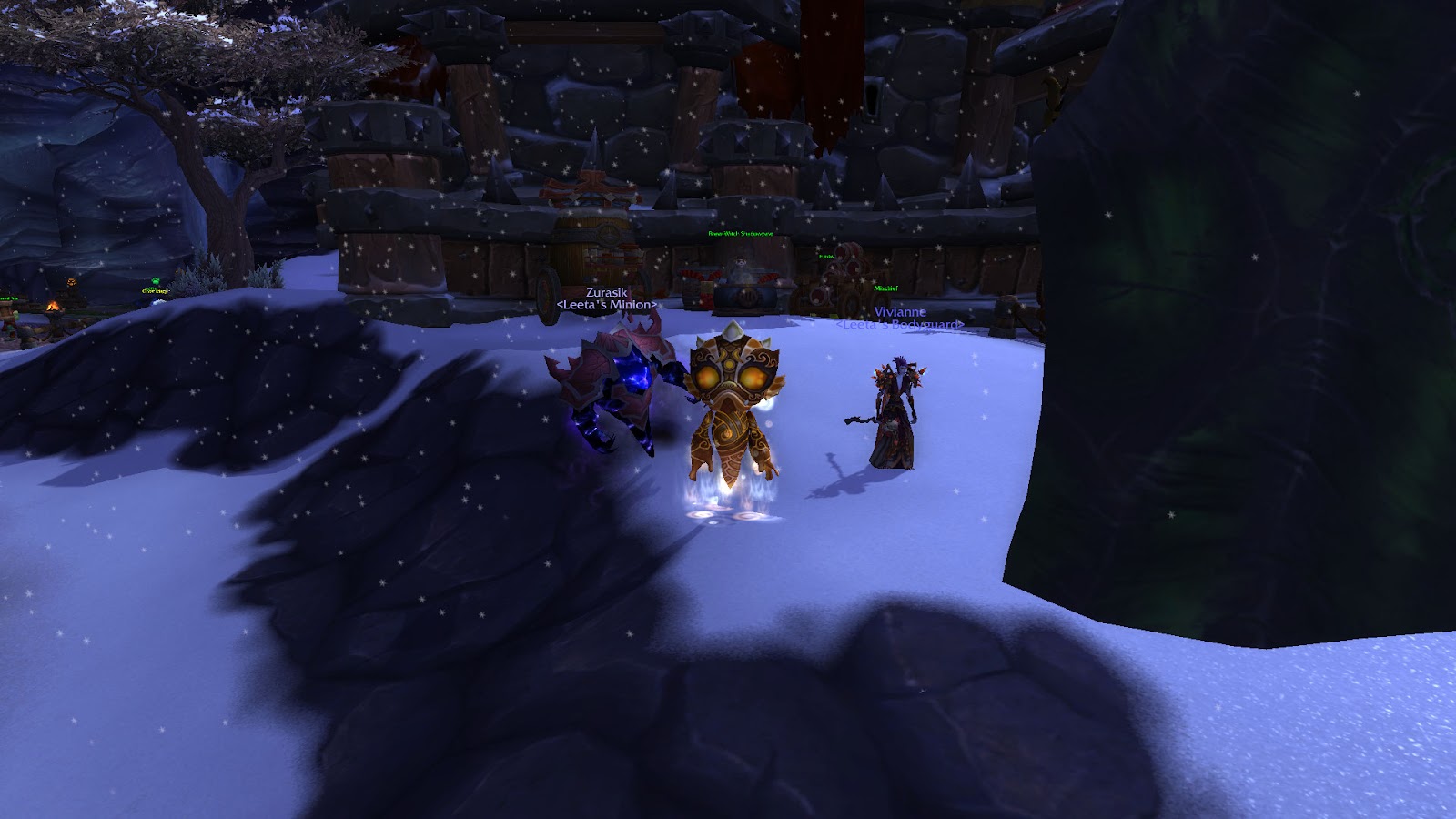 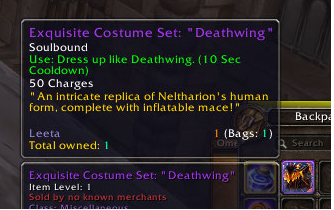 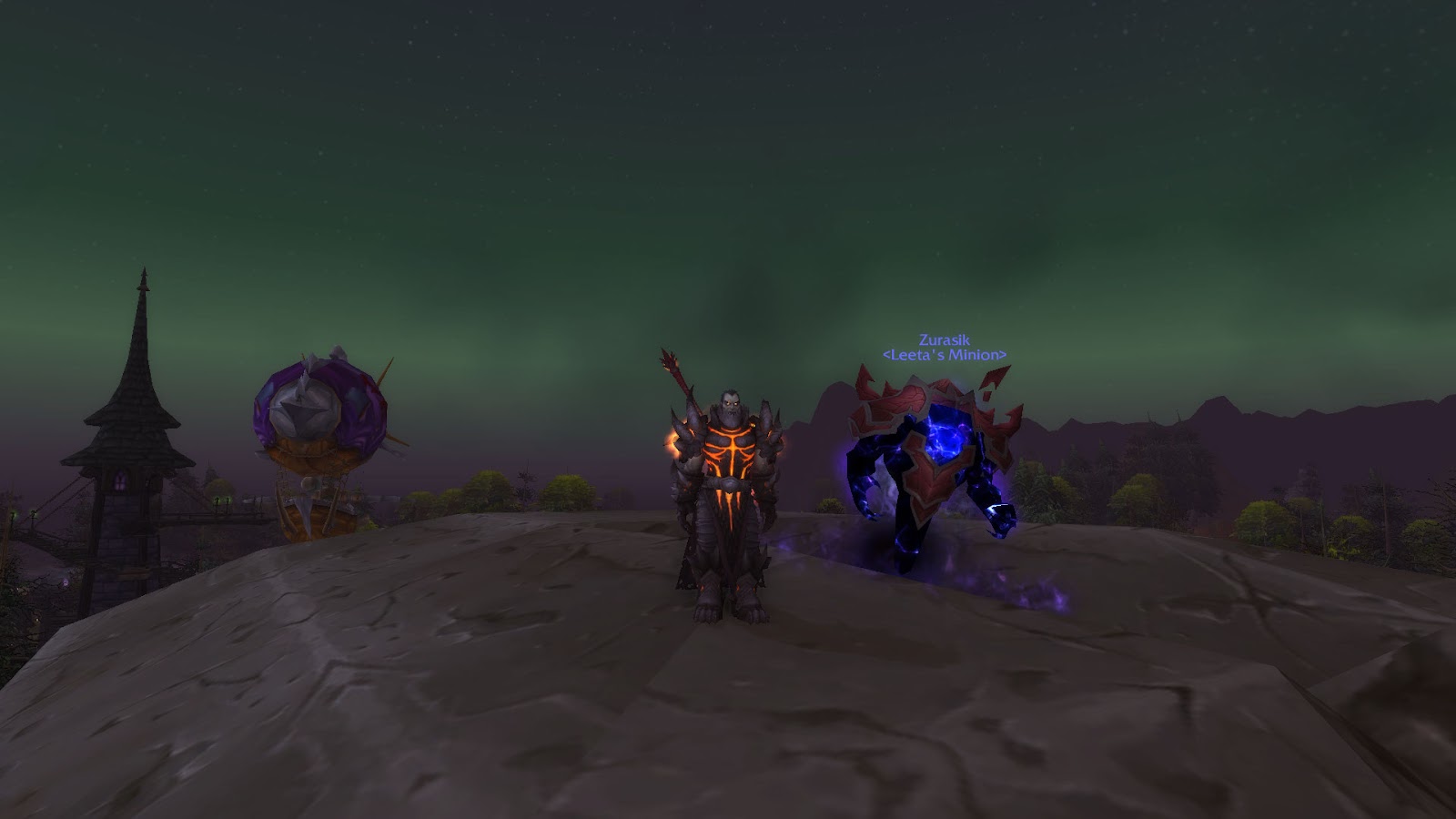 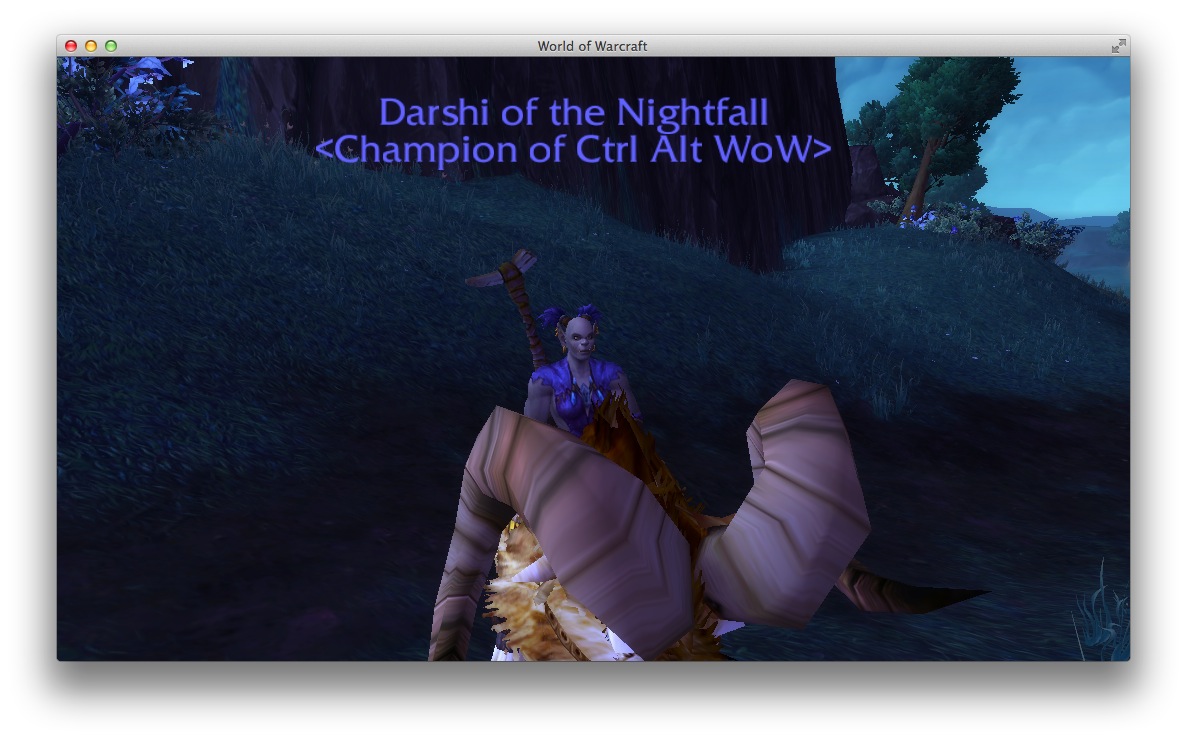 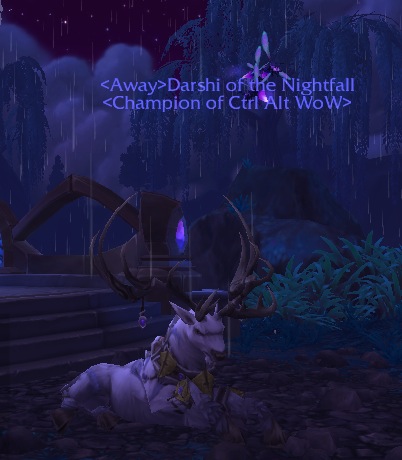 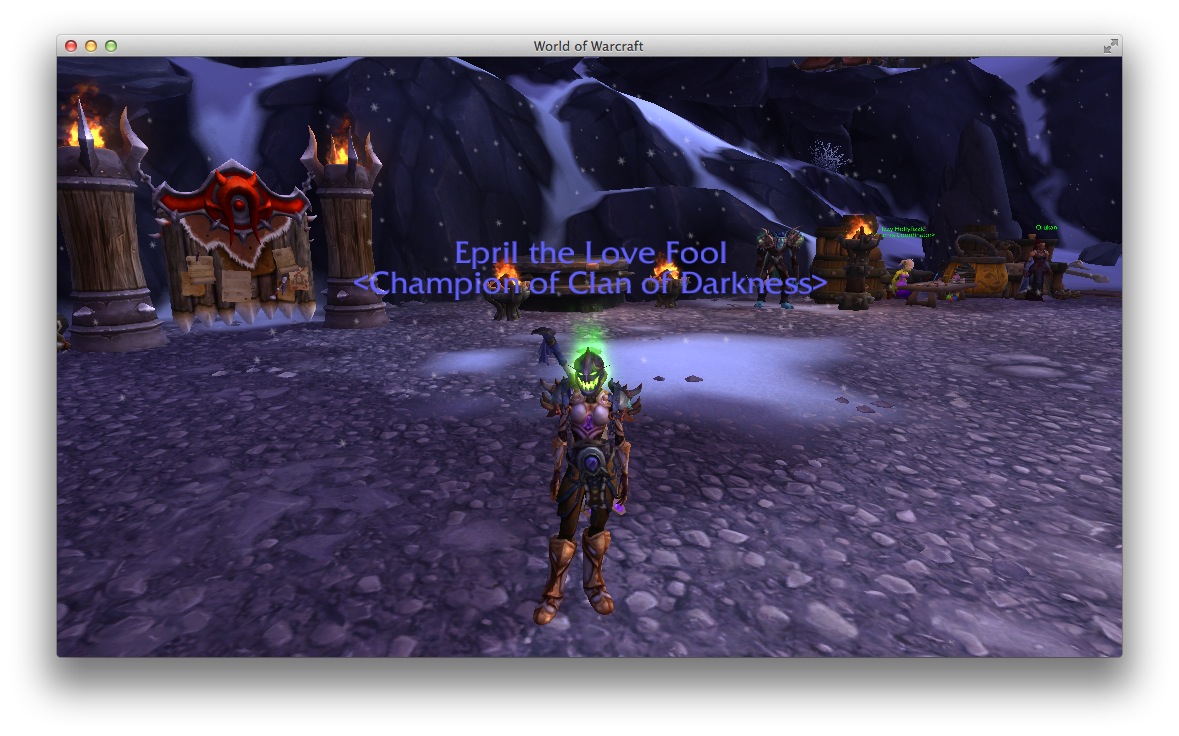 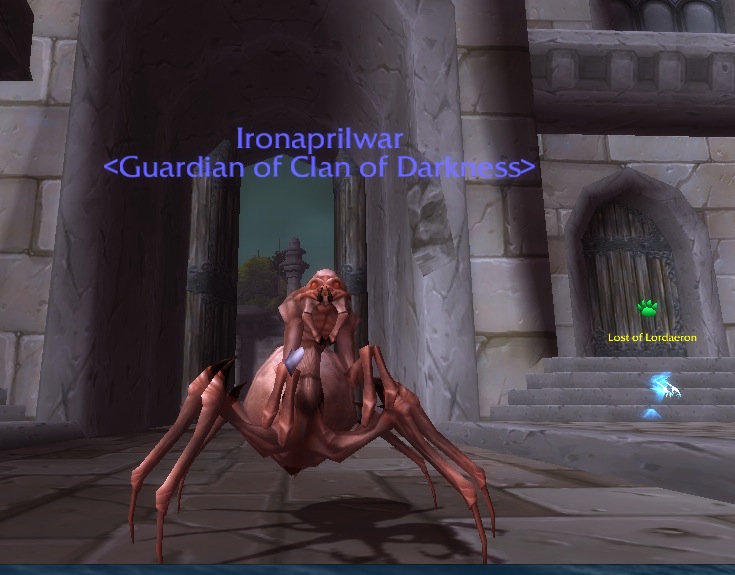 A Week With NO Deaths
‘Cause ya gotta play to die !


Death Scar Screen Shots
Notice the name of my turtle ! 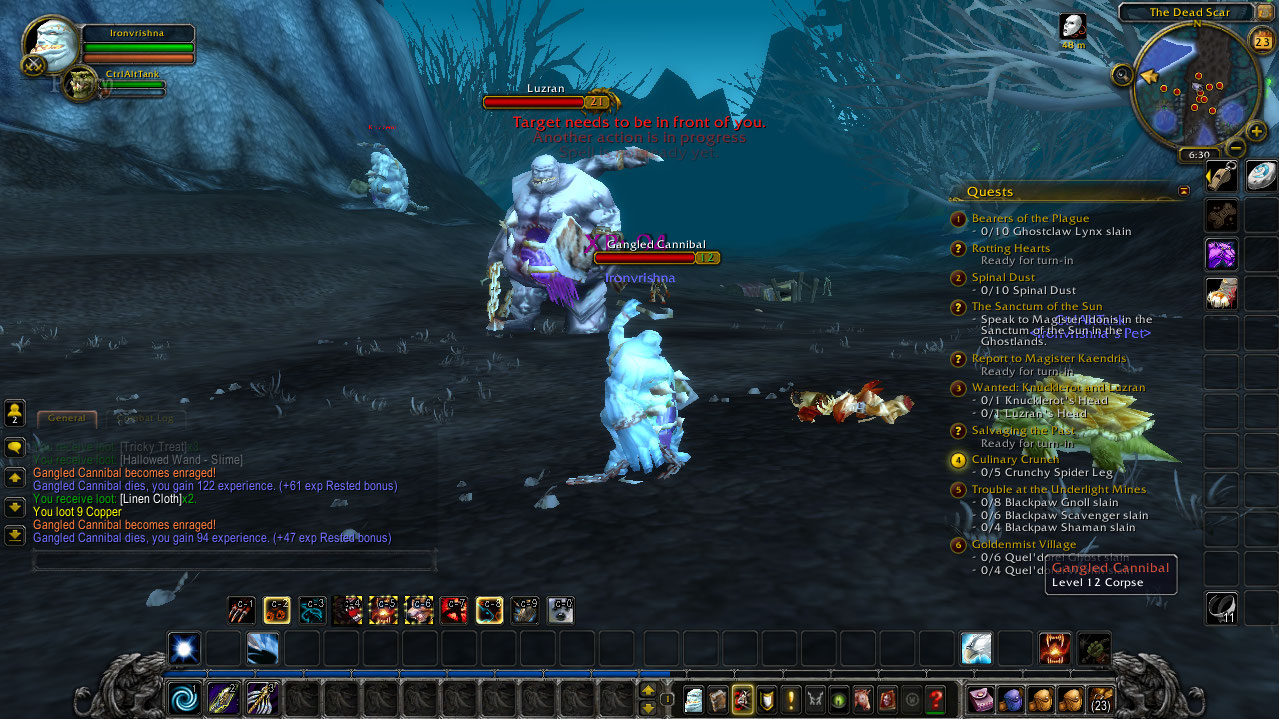 Below is why Aprillian was yelling at me to run at the beginning of the cast !!! But I got the shot ! 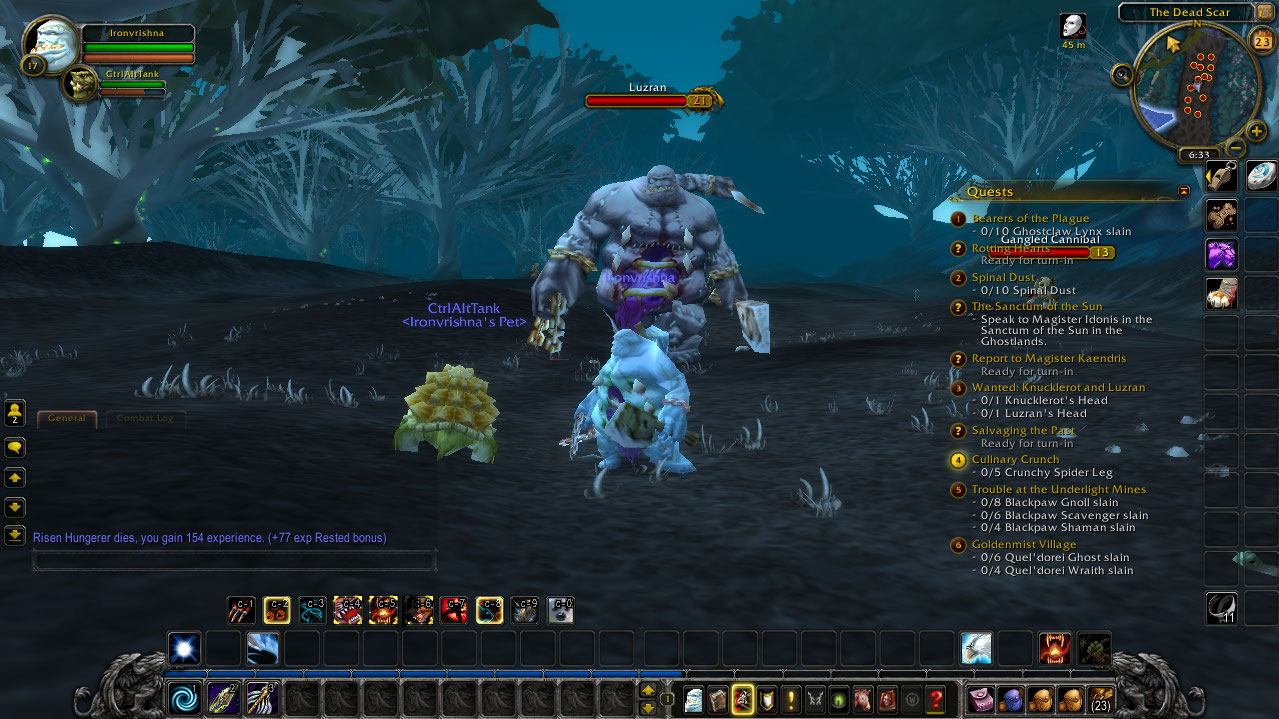 Hail CAW Crew,Lately I have found myself procrastinating about finishing up Tanaan Jungle, so I have been leveling all my 90's up to max level. Thirteen down, and five to go.  I have been keeping up with some of the holiday events, enough to get the new pets and toys that have become available.  I finally got a Nightshade Sproutling to drop for me from the garrison herb garden. Still working on the sack of spiders toy.I would like to encourage anyone who is free to join the Gnome run for cancer awareness on Sat the 24th on the Scarlet Crusade Server. I have attached a picture of my little pink haired rogue, Orchidae, that I wil take on the run.  November 2nd will mark the first anniversary of my mother's death from cancer.  My two older sisters are both breast cancer survivors.  So this is a cause that is very close to my life.  Please come and show your support.  The details of the run are posted in last show's notes.For the Gnomes (just this once),Duvessae 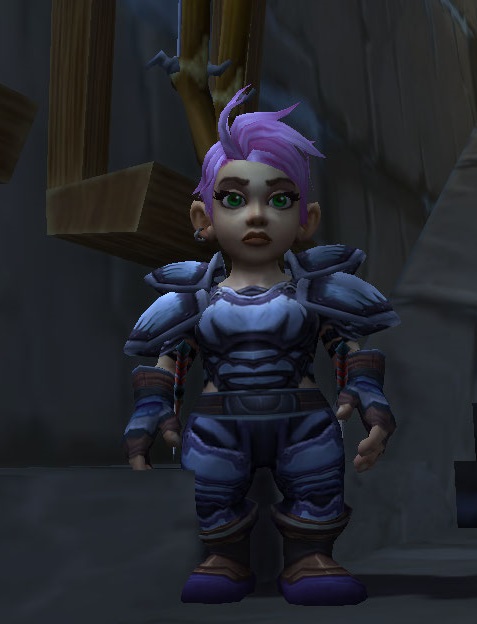 
My week in WoW. Long and not cheery.
From Alisaunder,
Hello Ladies,
This is long and not a very happy email so you can skip to the last paragraph if you prefer. I wouldn't read it either.

I saw a question on Realm Maintenance about what they want to hear at BlizzCon and it stuck a nerve.
After wrath I was extremely concerned about if i would like Cataclysm and turned out I was right. I wasn't sure about Pandaria with what we knew and was mostly right there too but it was a pleasant place so turned out to be the rest I needed to heal my wounds.
Legion I thought would be pretty great, my hopes were way high and overall it's been good up until the end game. I love my beautiful Alliance garrison and only regret that it was never made into a Guild garrison.
And now there is Legion, and I just don't know. And that is what I want to know.
There was so much potential in Legion and an epic story so good they wanted to do it again, but the game we got was in many respects, not the game for players like me who enjoy crafting, farming herbs and ore in a lovely area.
A respite from what was a rough year.
A vacation land.
Not my second job.
I've been pouring my heart out for months now to podcast after podcast because I have no one else. Blizzard has walled themselves off and none of my RL friends play anymore.
I feel like a relationship is failing. A marriage or whatever, not with a bang but silence and disinterest as they pursue raiders or younger players or, I don't know.
I tend to play other games now, but I got my Terky pet ( Squee! ), ran the Circuit of Optimism for a while, got Exalted with two more factions ( and their pets and mounts ), farmed the Sapphire Cub Design for a friend and handed out baby blue kittens to bunches of friends, and you know, I was happy.
Cheers,
Alisaunder


Rigarmorty Audio
Greetings CAW Crew!
So it's been another hectic busy work week and i had my R&R but no Wow sadly. Fingers crossed i'll get back on next week either EU or US side, depending.
For the Horde,
For the Alliance,
Cheers,
Rigarmorty x


Thanks Grimrok for the donation!