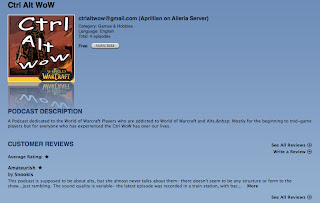 So I've learned a valuable lesson, it's better to wait until I can be in a place that is quieter than to merely put out an episode on a schedule. I guess his comments could have been worse. He didn't say I was inacurate about my WoW stuff.

Although I don't agree with no structure and of course it's amateurish, hello, I am an amateur, LOL! But the best part is that someone listened and gave feed back, yippeee! As indicated in the show notes, I do try to follow a particular formula, and sometimes I do go off on a tangent but what podcaster doesn't?

As for the alts part, I was hoping for more feedback as to what direction to take that on. But I think I will do a special episode introducing my alts, as soon as I've moved them all to Baelgun. But I am still on a train heading to California. I was able to play WoW up until early Tues morning but then the patch came and as good as my data plan is on my cell phone, I can't download a 163 meg patch. I have been playing my beta characters although they took one of the beta servers offline for a while. I was toying with leaving some of my alts on Alleria and some on Baelgun, but I don't know.

Sorry again everyone for the bad sound quality. Maybe when I get to the hotel in SF tonight, I'l redo it. I would redo it now on the train but the train makes a lot of noise as well.

Anyone have suggestion for a tagline for my podcast? Please email me at ctraltwow@gmail.com.
Posted by Aprillian at 8:42 PM