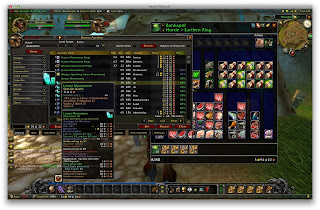 What We Did this Week

BRD
Ashayo showed me the correct way to get there

Every morning just about, went into BRD. Had fun.

While killing Fel Corruptors in Blades Edge, the item "Damaged Mask" dropped. This starts a quest line that is mostly soloable, but much easier with two character.
http://thottbot.com/q10810

You get sent to Camp Forge Anger to use the mask as a communicator to talk to the Burning Legion.
Two things about this chain. (1) The mask quest item has a 1hr timer on it, implying the quest is a 1hr timed quest, but doesn't display as such. (2) One step in the chain has you kill Anger guards to collect 5 keys to activate obelisks to summon Doomcryer. Make sure you clear the area fairly well before you start using the keys. Otherwise, by the time you get to the 5th, the first obeslisk has powered down again, and you have to start over.
Doomcryer is a elite mob, so tough to solo, but easily done with two players.

The next part of the chain sends you into Death's Door. One step has you destroy two Warp Gates with a cannon, which is controlled like a pet. However, imps come out of the Warp Gate and explode on the cannon, causing it damage. You need to destroy the Warp Gates before the imps destroy the cannon. Again, most easily done with two players. I just had my pally lay down Consecrate - the imps have very little hit points.

The last step has you kill the Hound Master, who is a level 68 elite. But, it is easily soloable because you get given a wand that summons an Ancient to help you.
The reward is a selection of 6 different neck pieces.

Shows who has what.

I was going to talk about my views on my alts, which I have many, I play both factions but my main is a 70 alliance warrior.

But then Aprillan, you mentioned how you enjoy skinning mobs that the alliance players downed but yet you get very irritated when you neutral auctions are intercepted (as stated in #63) ?

Are you kind of contradicting yourself ? You do not like it when someone intercepts your auctions but you enjoy swiping skins from mobs that alliance downed.

I never really knew this sneaky aspect of bottom scanner until I heard it from your podcast, several casts ago, but I tell you, I think I need to spread the word on the alliance side on Earth’en Ring on the finer points of its use.

LOL perhaps if you ask for forgiveness from some lonely alliance player I will re-consider letting the cat out of the bag on how to use bottom scanner.

For me, if I see a horde in trouble I will always help them if they acted respectful to me.